This next model hits close to home.  The new 1:18 Audi TT Coupe MKI 3.2 from DNA Collectibles.  The Audi TT was a dream car of mine since the day it was unveiled to the public back in the late nineties.  Innovative styling cues on the exterior and interior, along with German engineering and turbo made it very appealing to a young man.  Once I saved the money, I purchased the real thing back 2004; a 1.8T 225HP Quattro and held on to her for a number of years…

My Audi TT was injected with 1.8l turbo producing 225 horsepower.  Exterior colour was Imola Yellow and the addition of aftermarket BBS nineteen-inch rollers alongside H&R coil-overs dialled her in nicely.  Eventually, I also bumped the horsepower with aftermarket ECU tuning.  This was a whole lot of car back in the day, I truly miss the experience. 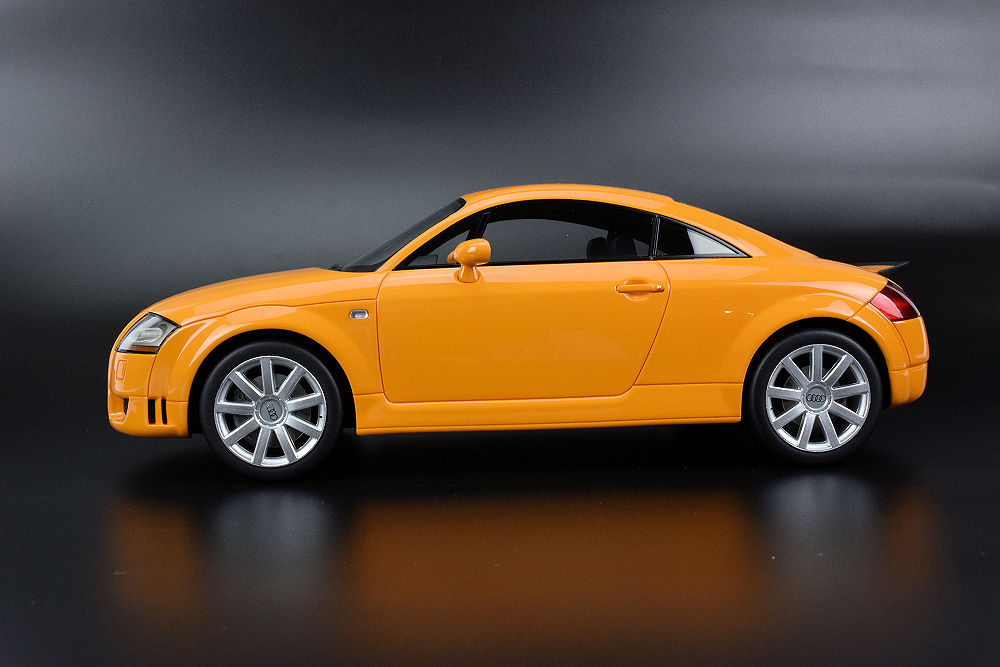 The exterior and interior design definitely pushed the limits, and I still think it can hold up well against any manufacturer design of today.  Even the second and third-generation TT’s are tame in comparison.  So, when DNA Collectibles provided the opportunity with a working sample, I jumped at the shot to review it!

The stage is as follows, the Audi TT is crafted in 1:18 scale and manufactured with resin, along with plastic and metal parts.  The model is limited, only 320 units of this example will make it to market.  In fact, this is also the first for the 3.2 version to be replicated in 1:18 scale.  More reason to buy one! 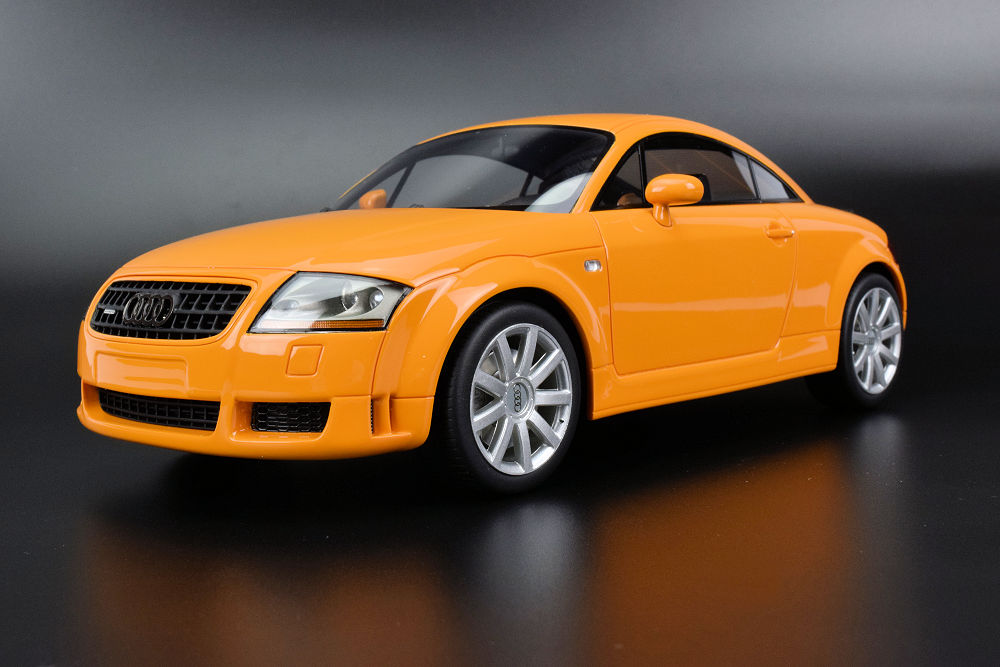 Let’s start with the exterior.  The 3.2 variant of the TT is slightly different than the first models that rolled off the assembly line.  This motor to start featured no turbo, but 3.2l normally aspirated VR6 24v.  Output was modest, about 250 horsepower.  Exterior wise the front facia lower section featured larger openings than the standard TT and gill-like structures on either side.  There was one more styling element from what I remember, the rear spoiler was extended an inch or two with a rubber-like material around the perimeter.  Inside the alignment was basically the same, one exception was for us in Canada no option manual only automatic.  The main reason I moved forward with 1.8T Quattro with a 6-speed manual! 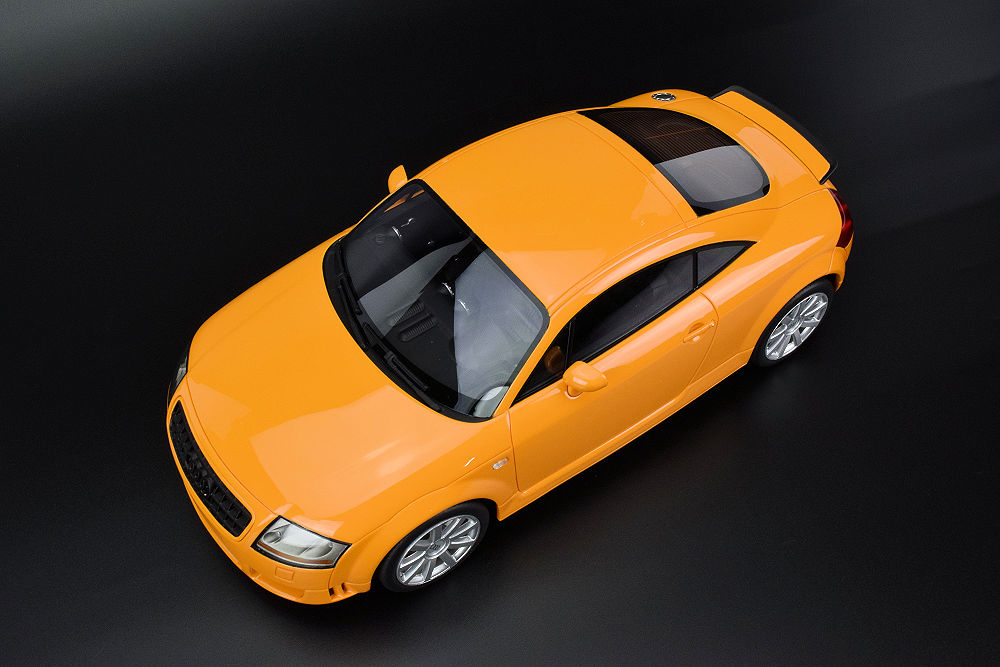 The exterior paint on our example is flawless.  The Papaya Orange is slightly different than the Imola, and many fans or owners usually mixed up to the two.  The model was originally shot with a White backdrop but this wasn’t doing the Papaya Orange any justice.  After some back and forth I convinced the team of re-shoot!  I think the results speak for themselves. 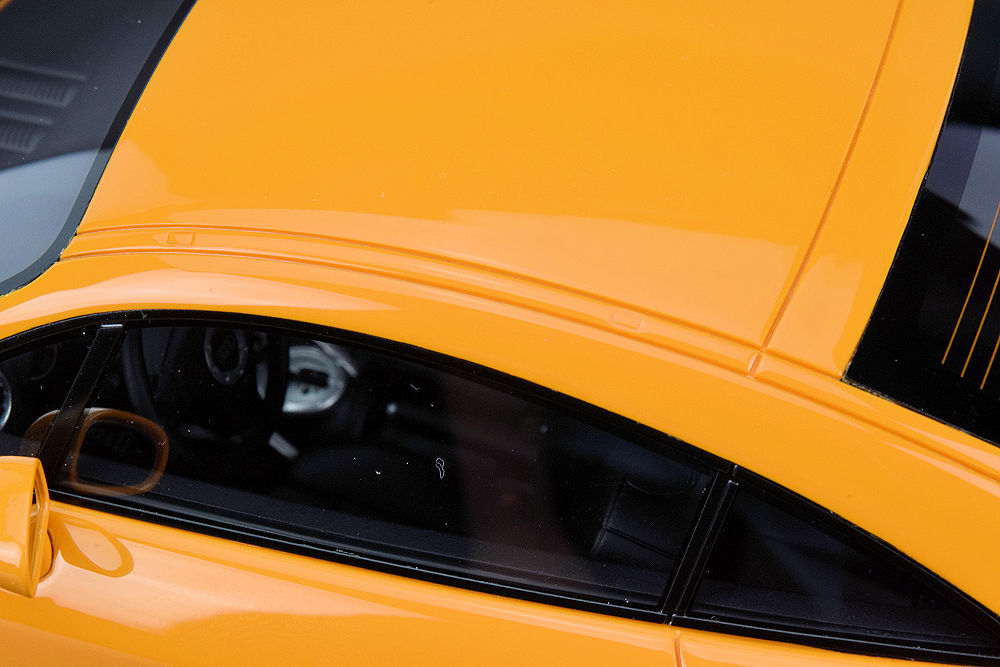 As for overall exterior shape and design, I think DNA Collectibles nailed it!  Resin has its limits, though I like the way the team defined the panel gaps.  Very consistent throughout.  Nice work on the integrated side markers and well as the lock on the door handles.  LOL, this definitely dates the car.  One item that really impressed me was the attention to detail in the roof section, something so small but it was item I looked for.   The roof of TT Coupe had intergraded and hidden roof rack mounting points.  By pushing down on the four covers these mounting points are revealed.  DNA actually defined each one – see photo above.  However, this is a very thin rubber-like trim piece that extends the length of the rail, this isn’t shown in the model. 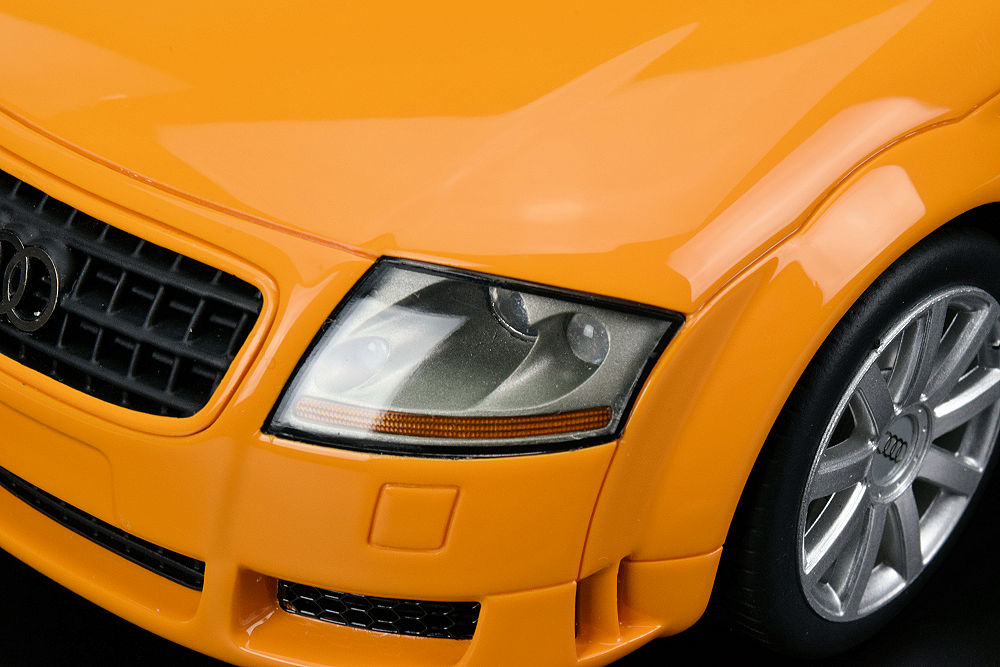 The front of the TT 3.2 features the most aggressive chin spoiler available at the time.  I was oh so jealous of it…  Each opening is crafted with open grilles, each section is executed with care.  Quattro emblem and centre Audi logo is in check.  If I had one small complaint, the flat nature of the Audi rings on the model is not consistent with the original.  This should have been executed with a more robust, 3D like shape.

The headlights are exceptional.  They are accurate and detailed, definitely justifying the price point.  You can tell these a European spec as there is no amber reflector lining the exterior vertical side. 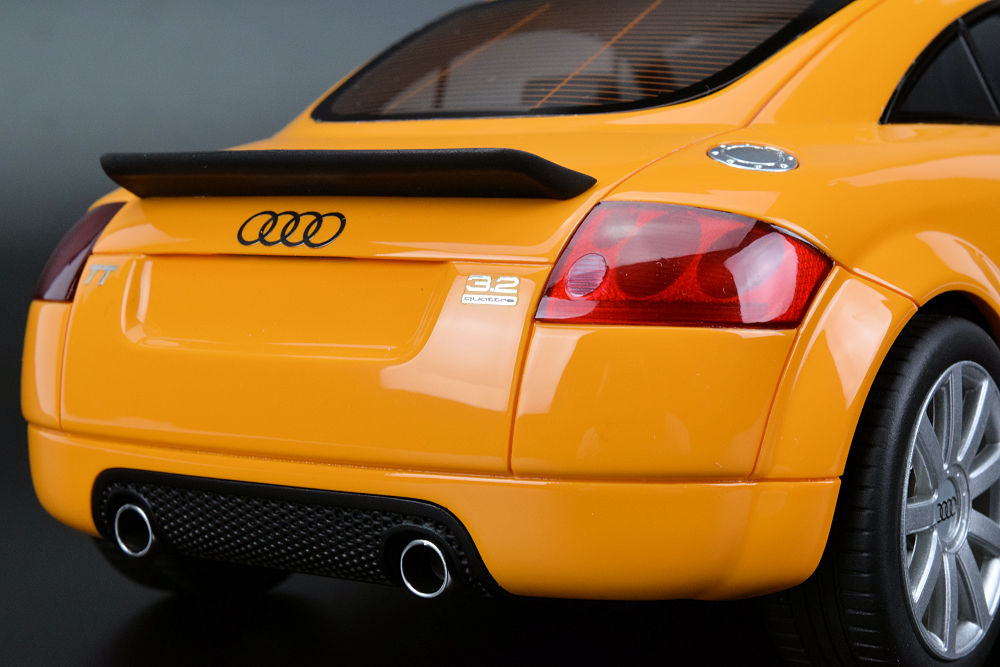 The rear features dual exhaust tips.  Nicely crafted too, they look like metal and this material does continue to the underside of the model.  Taillights are again beautifully executed.  Attention to detail is definitely found in the definition and the European rear-fog light is revealed too.  As you move further up you see the extended rear spoiler with Black extension piece.  Just to the right, one the TT’s awesome styling cues, the metal pop-up gas filler.  This feature is still found in the third generation today.  Again, the only complaint would be the flat look on the rear Audi rings.  One thing that some might suggest DNA did not use perforated grille on the centrepiece that houses the exhaust tips.  In fact this is a solid piece on the 1:1. 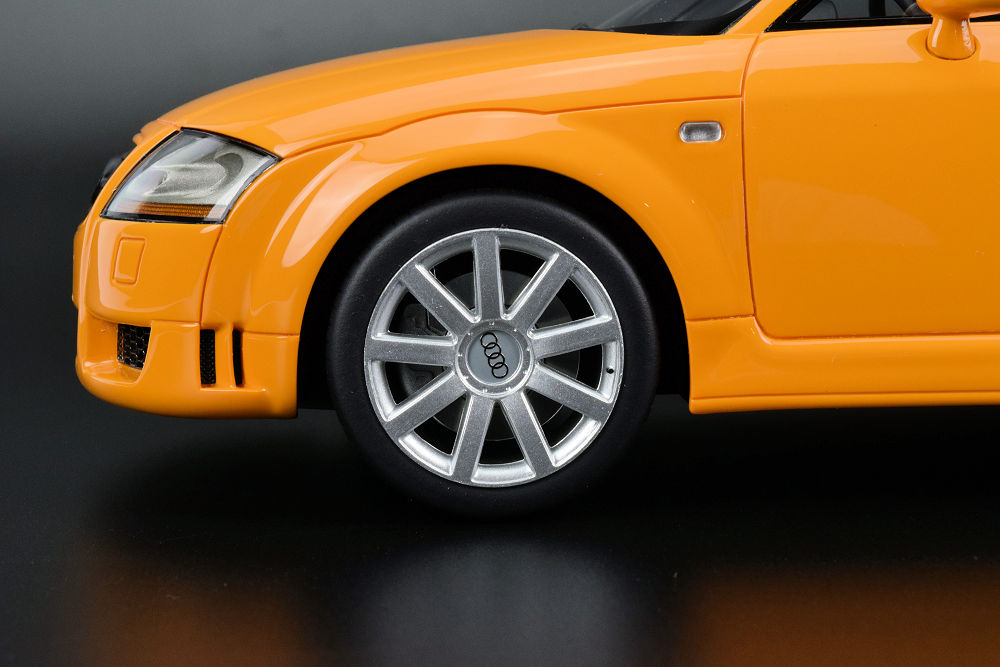 Wheels are OEM 9-spoke eighteen inches.  I loved this design back in the day.  I seriously thought about purchasing a second set of rollers of the same but in nineteen inches!  Nice work by DNA Collectibles on the overall look and the added detail of the centre cap perimeter and air valve.  In behind basic calipers and rotors were standard equipment of the day.  I did update mine to Brembo and cross-drilled rotors front and rear. 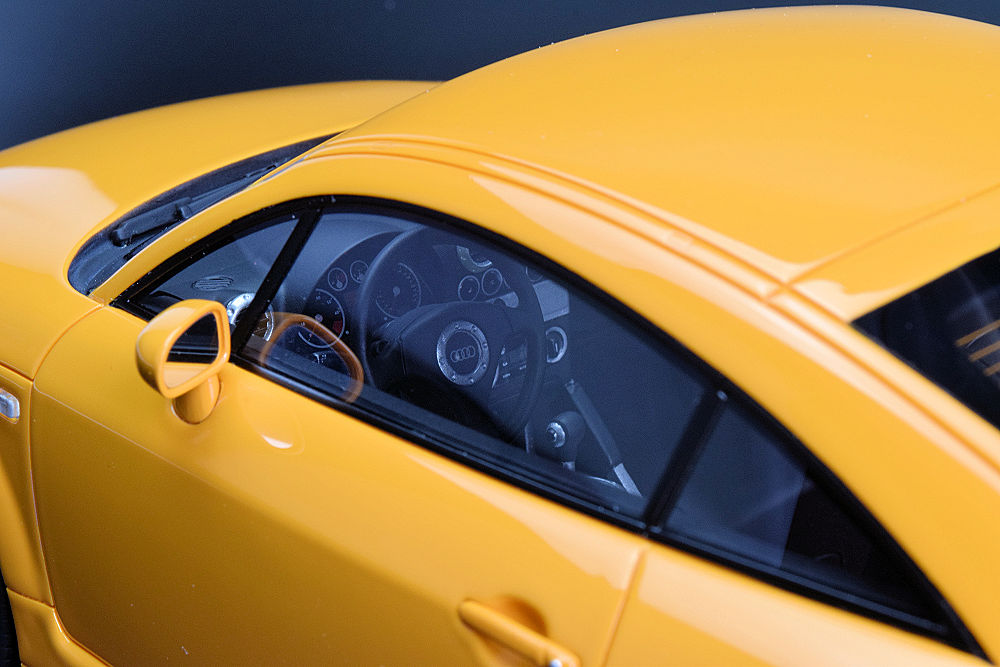 The interior of the Audi TT was ahead of the curve – a rare exception where concept elements truly made it to a production car.  There was a mix of high-quality metal trim pieces throughout the doors, dash and centre console.  I believe later designs lacked this detail, as the costs associated with the materials and manufacturing proved too high.

As for DNA Collectibles, high marks for capturing the overall essence of design and detail within the interior.   One thing I like to mention, within the centre console, the large chrome piece was actually a cover for the hidden audio deck in between.  So many times, people would comment “where is the radio?!”.   It isn’t perfect though; the model reveals no interior flocking.  At this price point, it is a must!  However, fabric seat-belts are found in front and rear. 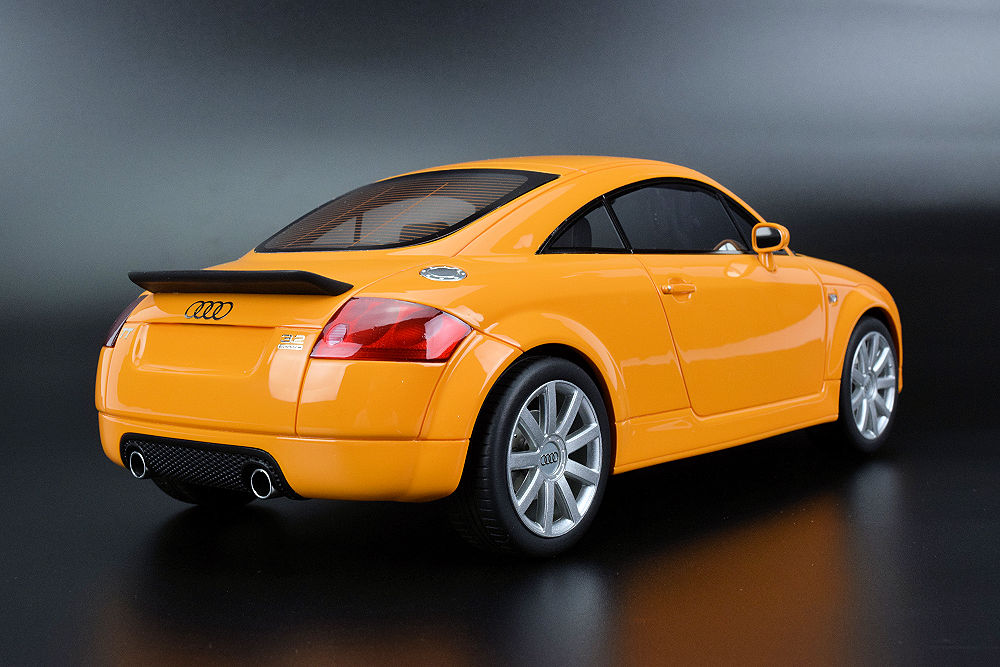 Being an Audi and TT fan, I knew this model would have to live up to my standards of what is acceptable in scale, let me say overall, I’m impressed.  And I dare say this is the best 1:18 replica in terms of overall shape and refinement.  My collection houses all the generations that are available too, so I do have a little perspective.  I also went as far as transforming a Revell example into a modified version that mirrored my own car with BBS wheels and all.  Is the model perfect, no, but it is damn close.  This one is definitely on the recommend list and a must-have for Audi TT fans and owners, past or present.  Buy with confidence.  If interested, you can enjoy free shipping from DNA Collectibles until the end of September 2019.  Enjoy the pics!