The third-generation Ford Mustang, also known popularly as the Fox-Body Mustang, is one of the most popular of the revered muscle car brand. Produced from 1978 to 1993, the Fox could be grouped into two segments; the quad headlight design of 1979 to 1986 and the later cars with the more aerodynamic headlight design. Personally, I prefer the latter with its more distinctive front fascia as the former came during a time when almost every car brand has a quad headlight offering on their sales lot.

I was smitten with the Fox Mustang since I laid my eyes on Hot Wheels’ rendition of a 1992 model. Compared to its successor, the SN-95, the Fox has certainly aged so marvellously while maintaining its coolness that is unmistakably 90s.  One of the most sought-after Fox Mustangs is the SVT Cobra that was produced only in 1993 following its premiere at the 1992 Chicago Auto Show. The majority of the upgrades were performed on the powertrain and suspension systems.

While the 302 cu in Windsor V8 was a carryover from the GT, SVT gave it a thorough upgrading including a high flow GT40 cast iron head plus a unique intake manifold exclusive to the Cobra. The camshaft was also re-engineered along with a specially calibrated engine control unit for improved air/fuel delivery. The Borg-Warner World Class T5 manual transmission was also strengthened to cope with the higher torque output.  Only 4,993 units were produced during the sole production year and Ford made available only three colour options; Vibrant Red, Teal Metallic and Black. 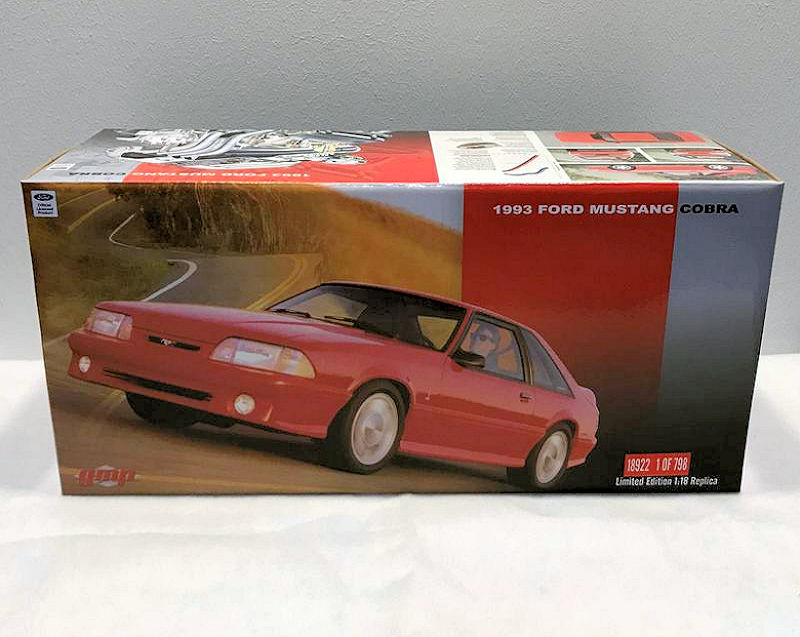 This Vibrant Red 1:18 diecast model is one of three available colours offered with the other two being Metallic Teal and Black which I think is a nice exercise by GMP. All three have the same interior option of Black which was only available with cloth seating in 1993. The other interior options was Opal Grey in either cloth or leather upholstery.

This is actually a reissue by GMP of the same mould which was first released in 2006. With more than a decade separating these two releases, you are bound to spot some differences (cough, cost-cutting, cough) which will be highlighted accordingly. The trio was first planned for a limited run of 1,000 units each and while I have no knowledge of the exact production numbers, I do know they are extremely rare and hardly show up on the usual listing pages. This time, GMP has opted to make only 798 units for Vibrant Red, 762 for Metallic Teal and 750 Black Mustang Cobras. 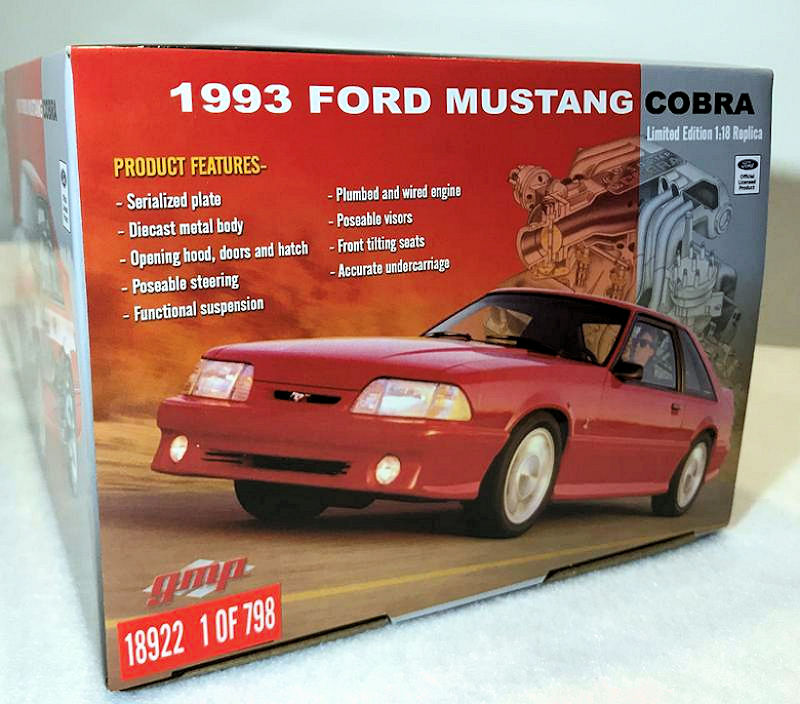 We must applaud GMP’s continual effort to release their products in packaging with proper artbox design. As is typical for GMP, the box lists down the distinctive features of your newest diecast acquisition. Unfortunately, the information here could use some updating as the model does not come with poseable visors. Also of note, regardless of what your Mustang colour is, the depicted vehicle on the packaging is Vibrant Red only. In the original release, all three colour options came with the same packaging design that displays all the three different Mustang Cobras. 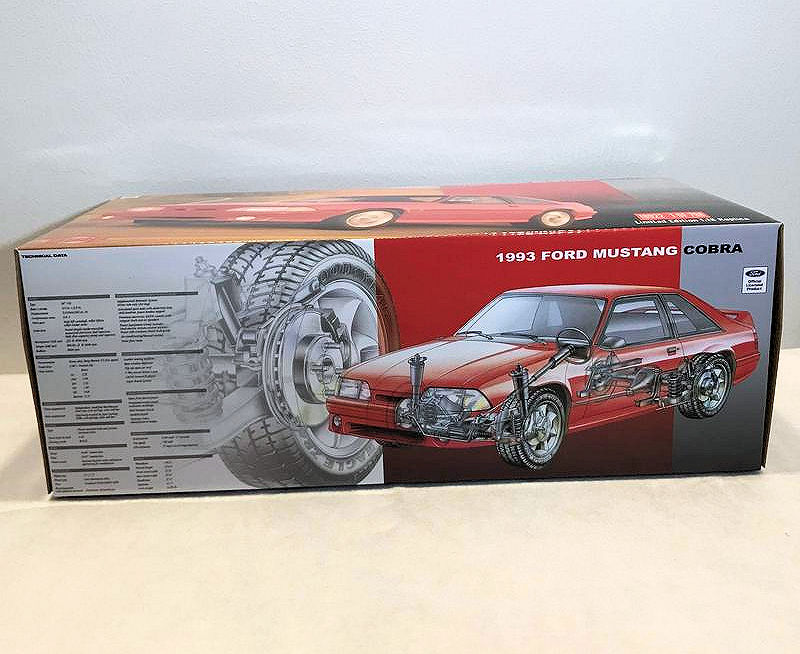 Putting aside the trivial packaging matter, the design is obviously inspired by the contemporary brochure for the Mustang Cobra. Well, more based on and less inspired by if we are brutally honest here but still what a refreshing sight. 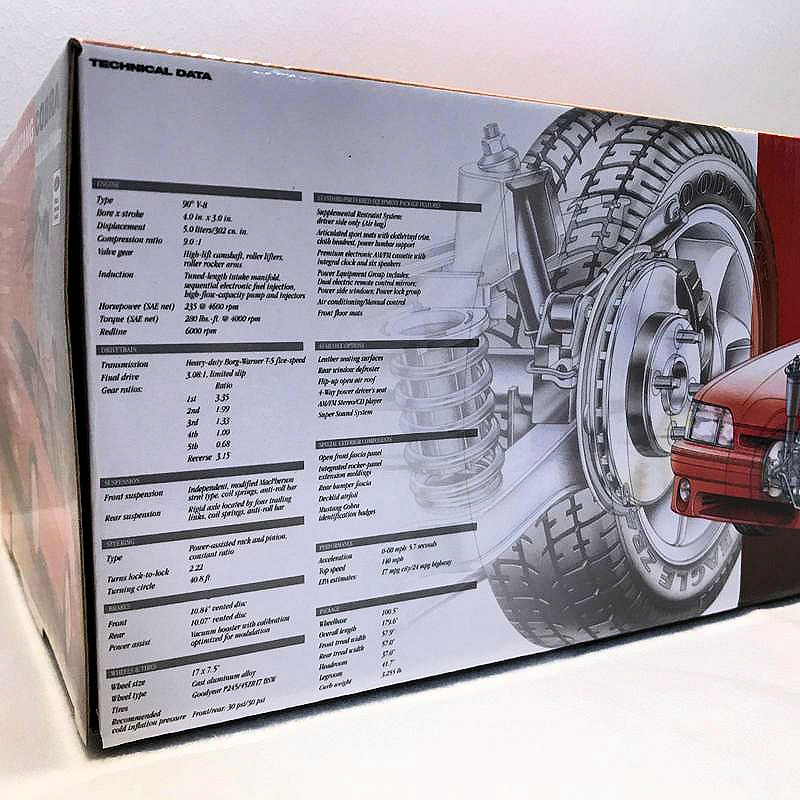 I think the best part of the packaging is the technical specifications listed on the back. This could be useful for some collectors who simply “hoard” with no propensity to better understand their models.

The model comes protected in a Styrofoam clamshell with no screws holding it in place. Exercise extreme caution when lifting the model from the bottom Styrofoam piece. I usually lift the model via the roof if it does not come with door windows, which is the case here. There are black plastic parts attached as weatherstripping and to my surprise, and later horror, they were not assembled to the best fit and finish. With the weight of the model resting almost entirely on the roof when lifted, I inadvertently dislocated the passenger side weatherstripping. Due to the sheer force applied, the plastic part was partially dislodged and bent. If you scrutinize the following picture(s), you might notice the passenger door of mine does not shut as it should. 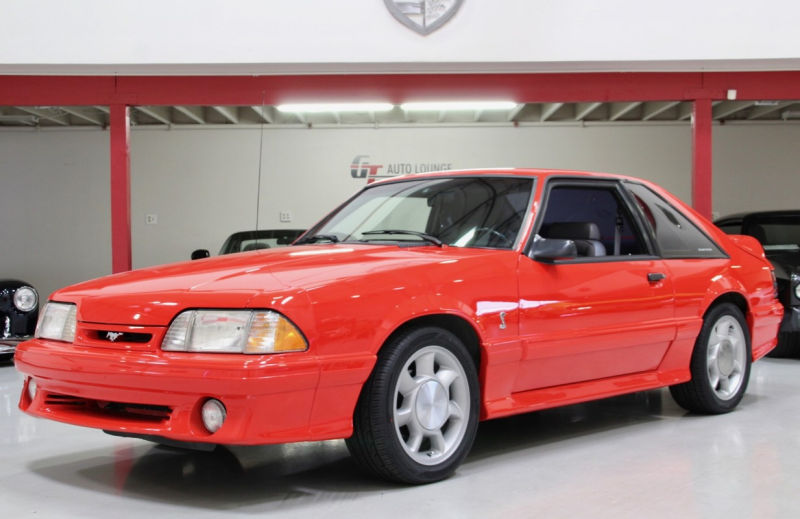 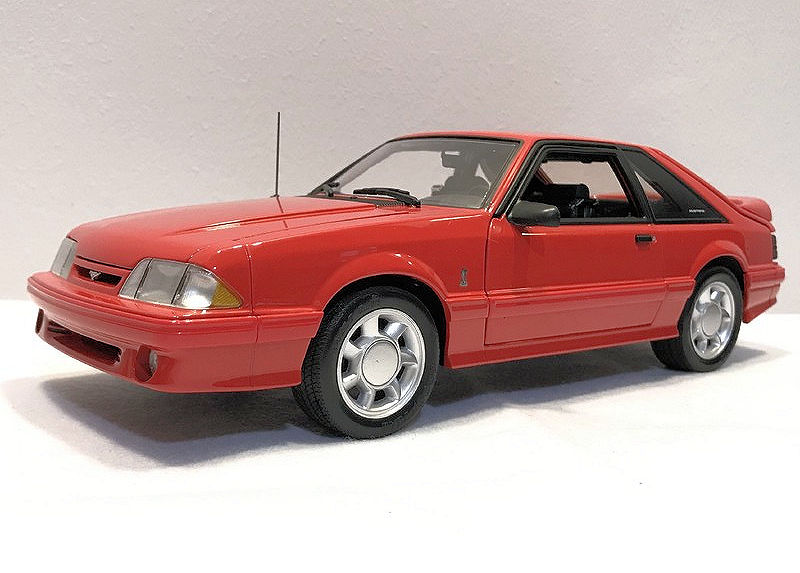 Generally, first impressions are very gratifying and satisfying. The paintwork application is rich and consistent throughout. This is especially evident by no presence of under-spraying on the base of the sills. After spending much time admiring and studying the body lines though, I am not 100% convinced GMP has gotten the proportions correct. From certain perspectives, it does appear the model is narrower than it should, which robs it of the muscular stance the Fox is so commended for. Detailing on the headlight is also poor with very low depth on the lenses. 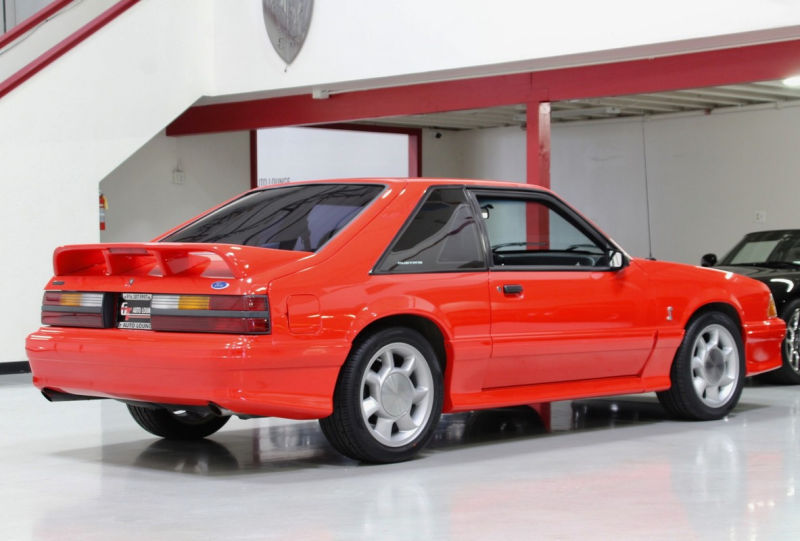 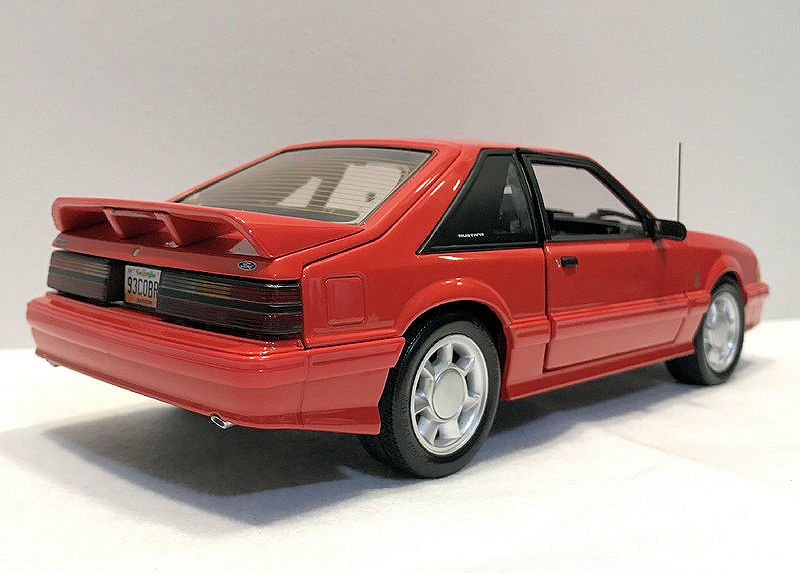 Curiously, the Fox looks more accurate from the bum. Perhaps the front was only ruined slightly by the headlights which are more chunky than they should. Detailing on the rear lights is generally good though they could be made brighter. The decal application on the trunk is perfect. Obviously, panel gaps are not the best but you do not buy a Ford Mustang for its perfect shutlines do you? 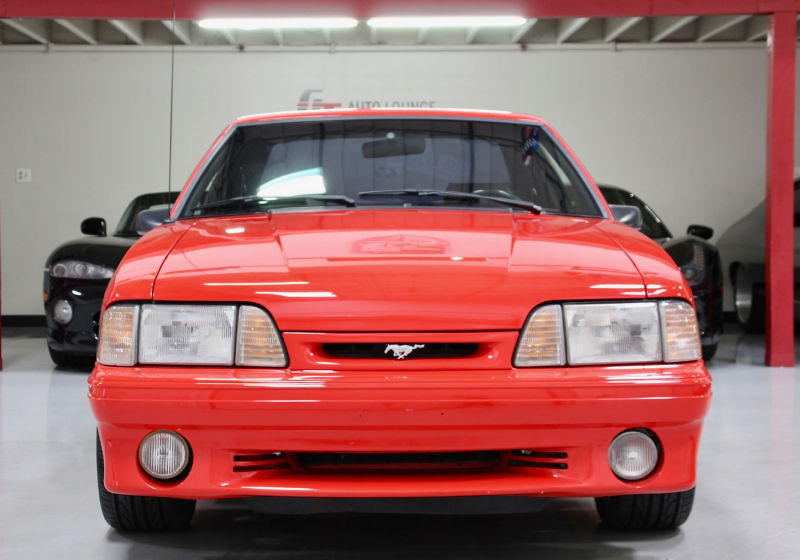 I for one am not fussy when it comes to panel lines, paintwork (as long as it does not look like a toddler’s work of art) and specifications inconsistencies (the Almost Real Camel Trophy Defender comes to mind), but really cannot stand the attachment stubs on frontal light assemblies. Just a sign of lacklustre engineering and / or lazy manufacturing. Sure, some might argue that on classic cars, the bulbs do look like the stubs on your diecast model but on the GMP here, they just look terrible on the foglights. Also, from this angle, you can clearly spot the inaccuracy of the headlight design and the poor detailing applied. This is the greatest disappointment on what is still a good model in my book because it makes the Fox appear ‘soulless’. 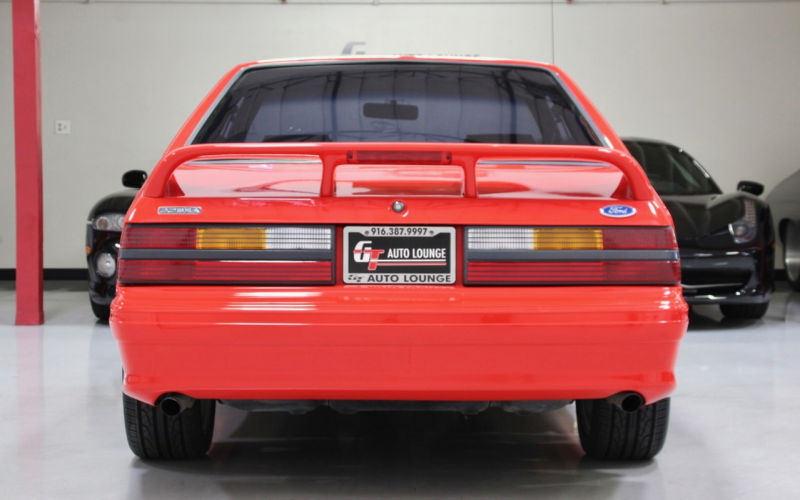 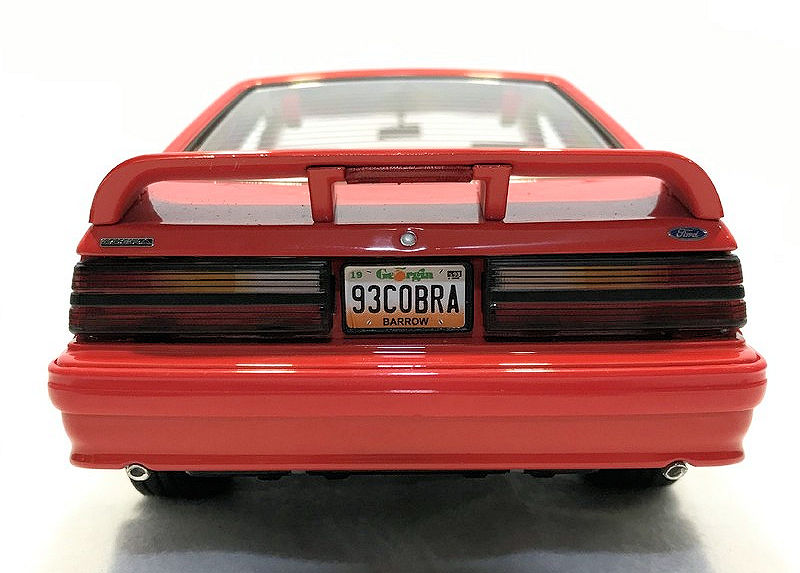 Thankfully, things are much more positive at the back although the license plate decal application could be so much better. The plate on my sample is not evenly applied with a small part of it ‘floating’. A small issue to me since you can hardly see it when displayed on a shelf. A second greatest disappointment here is the poorly executed dual exhaust tips. They are too small and are affixed too close to the rear bumper. Well, at least I cannot see this flaw when displayed. 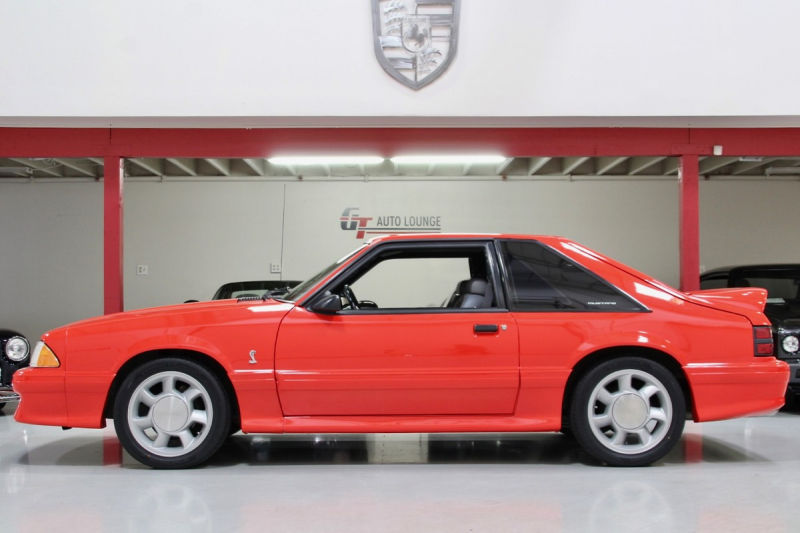 The side profile is fine I suppose but the ride height could be a little lower? There are functional front and rear suspensions but they are rock hard on my sample. 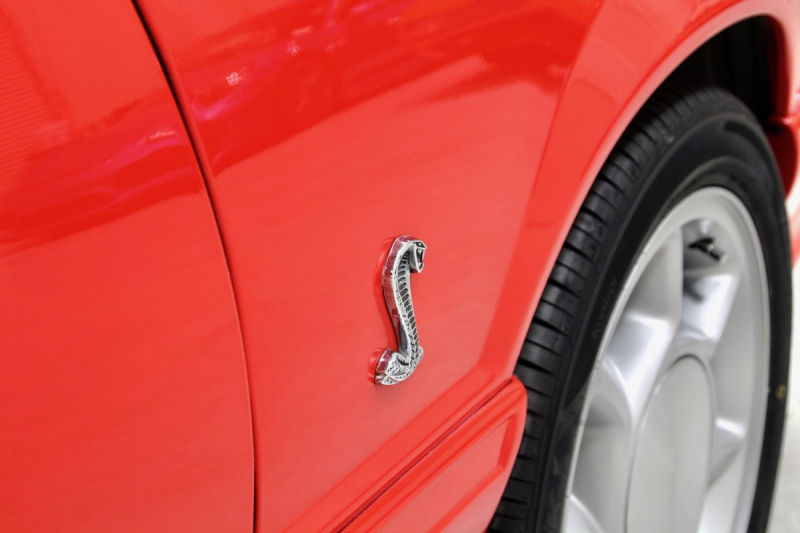 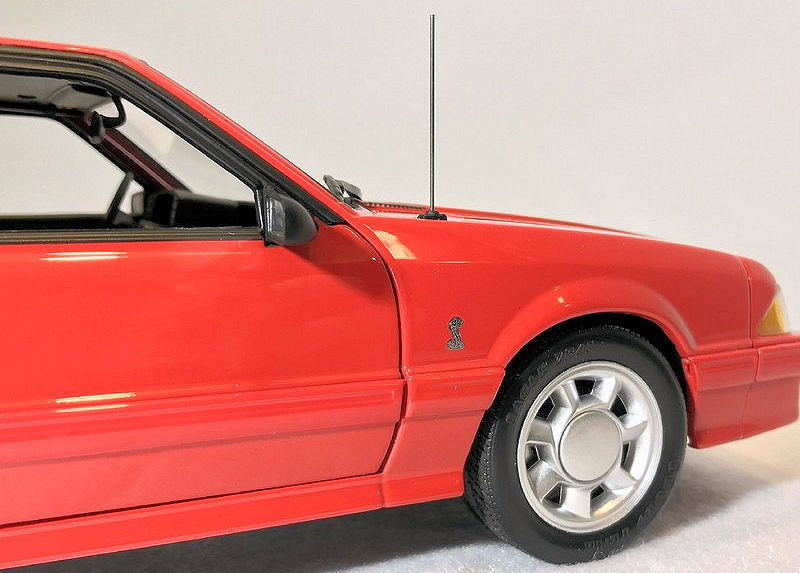 Obviously, the panel lines left much to be desired but even the actual Mustang has questionable panel gaps. The Cobra emblem here is only a sticker which is a bummer. I do like the scripted Goodyear Eagle tires even though the unidirectional rims look plasticky. The antenna comes as a separate piece and you can install it on the rubberized housing which works fine but does not expect a really secure attachment. 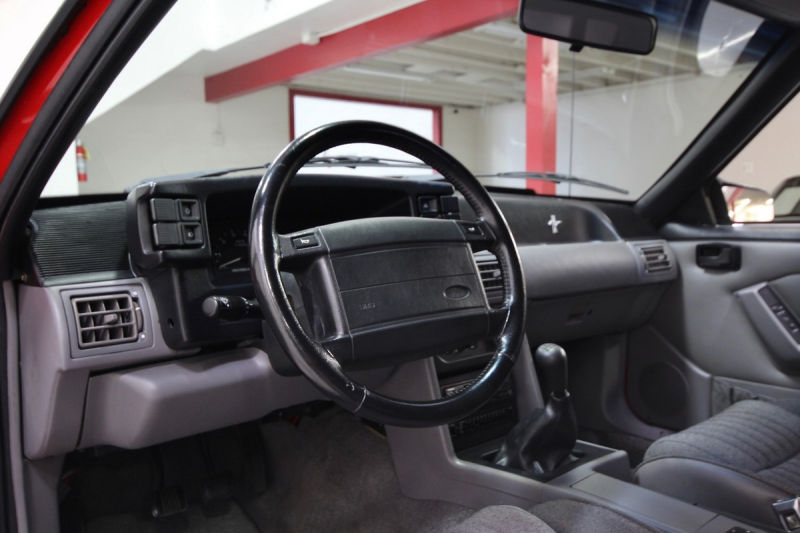 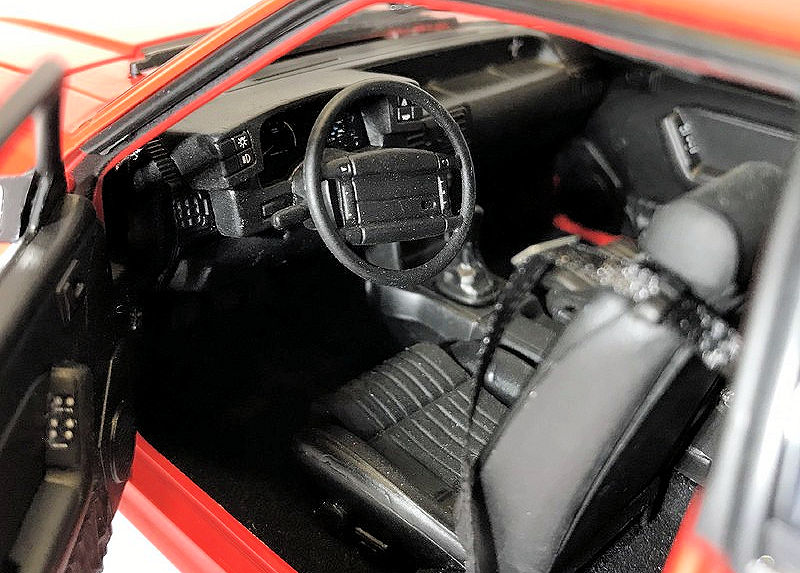 The Fox Mustang has one of the ugliest steering wheels in a V8-engined sports car. Granted, it was released when airbags were just becoming mainstream so designers and engineers were still struggling to make them stylish. GMP appears to have redeemed themselves once you ‘step’ into the interior. All the juicy bits and details are present. The seat belts are made of fabric and even the front seats fold back and forth. The plastic seats give the impression of leather but Black was only available in cloth back then. This is just a lovely place to be in considering it is based on a car of the 90s. 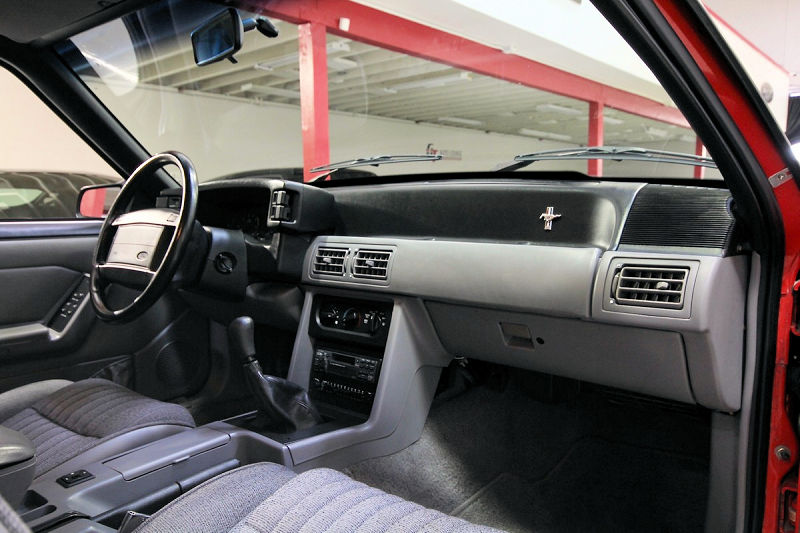 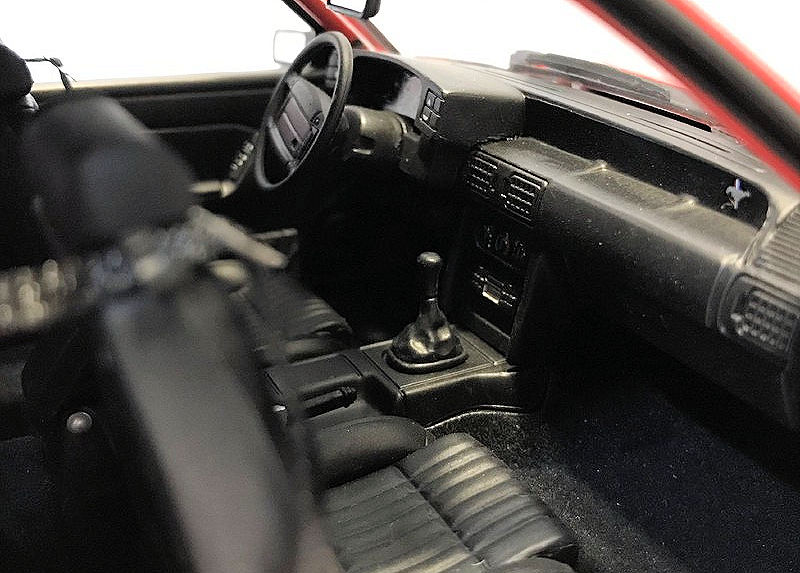 With the exception of the Mustang emblem on the passenger side of the dash, you’d struggle to identify the origin of this interior. It just looks boring but I dig it. Over-design and flashy interiors are just not my things.

At this point, the only cost-cutting measure found after the 2006 initial release is the deletion of the removable rubber mats. That would have been a very welcome accessory. 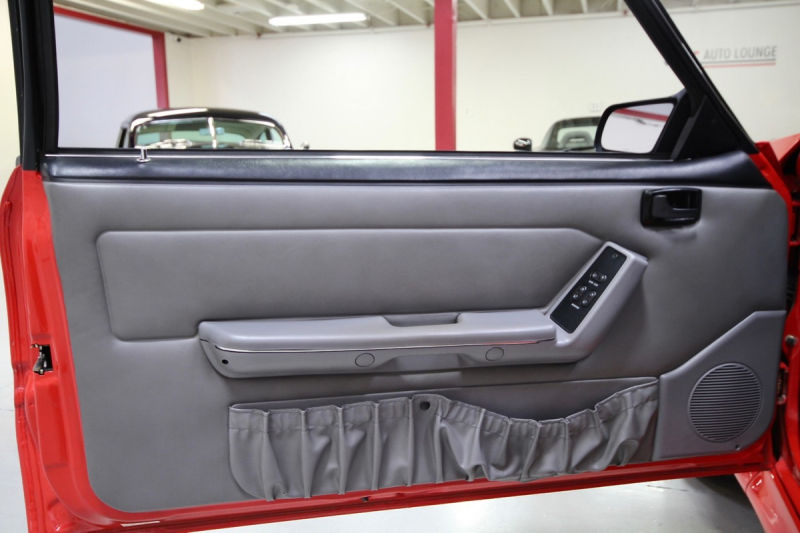 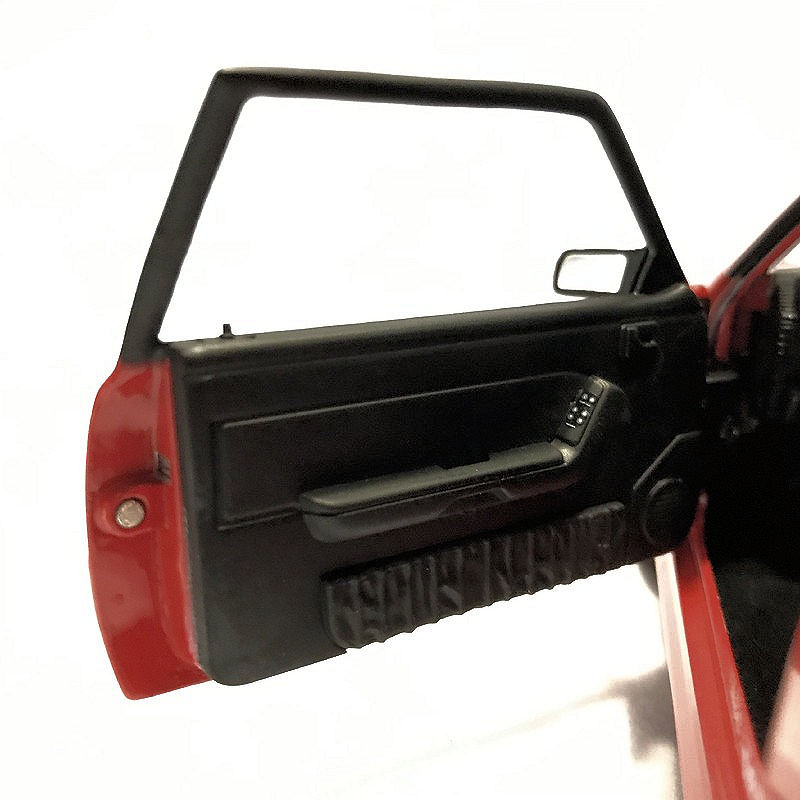 The door cards are without a doubt the most accurate representation of the Fox Mustang. I was watching some reviews of the actual car to better prepare myself for the writing. One of the general comments was how fragile the door pockets are. I mean just look at them. I bet a toddler can easily rip those out with no major effort. And guess what, even the door pocket on my driver’s side was detached when I opened the door. Thankfully, it is a rubberized piece and you can simply reattach it via a pair of moulded stubs. This is an authentic Fox Mustang ownership experience that is downsized. 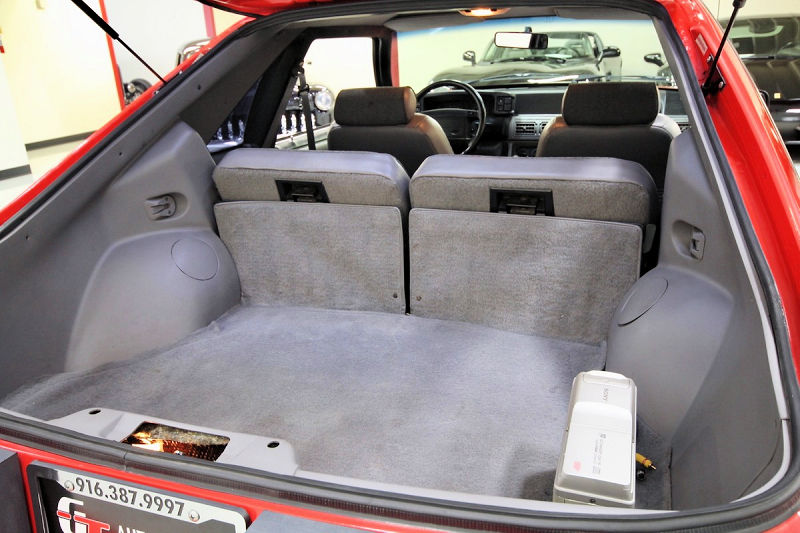 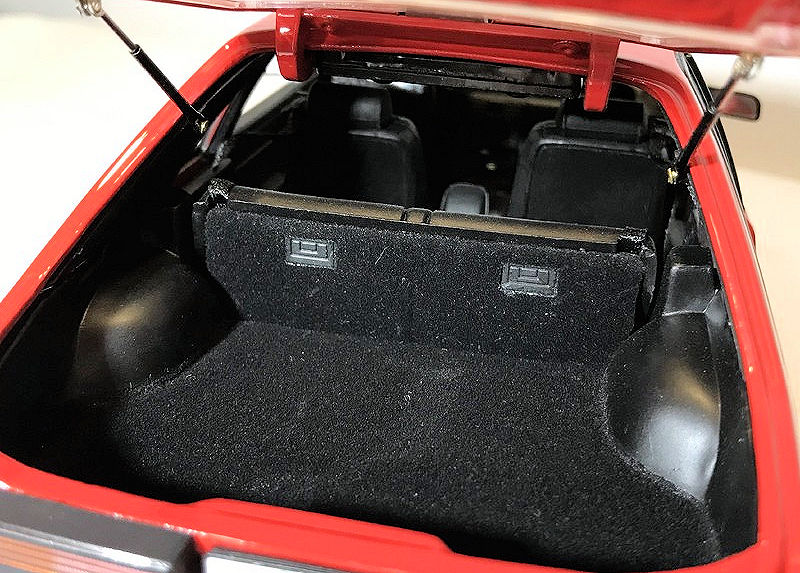 I wished GMP would have gone for Opal Grey in this second release. It should give the interior a more airy feel. Nonetheless, it is well-appointed with carpeting provided at as it should. Great to see the tailgate does come with a pair of struts that help to keep the tailgate in place if you so desire. Unfortunately, the rear seats do not fold. 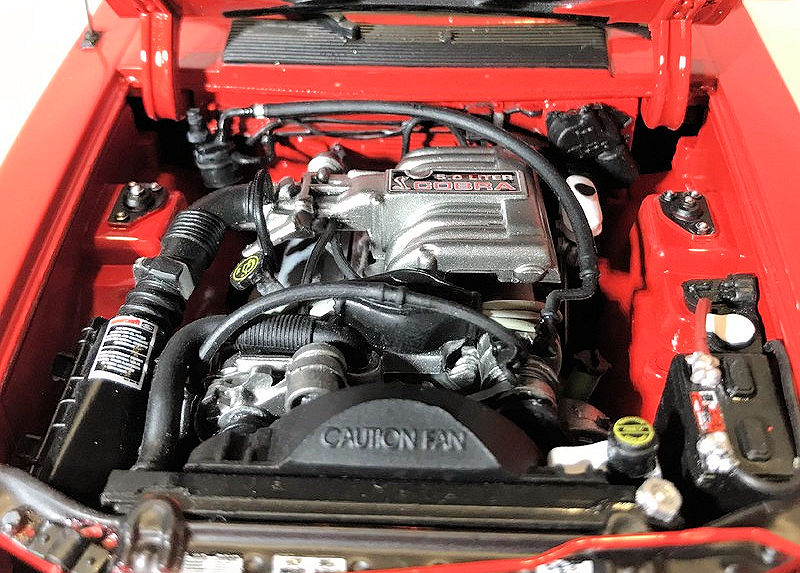 The highlight of any Mustang should always be what is stuffed underneath the hood. This is one of the better engine bays in my collection. Every major ancillaries and components appear to be individually moulded pieces that are then assembled. There are plenty of labelling and stickers to liven things up. Because of how shiny most of the parts are, it does look a little better than the actual engine bay. There are no struts here but the dogleg hinges are very sturdy and have no issue holding the hood up as you gaze upon the Windsor V8 that can make 235 hp @ 4600 rpm and 280 lb-ft @ 4000 rpm. 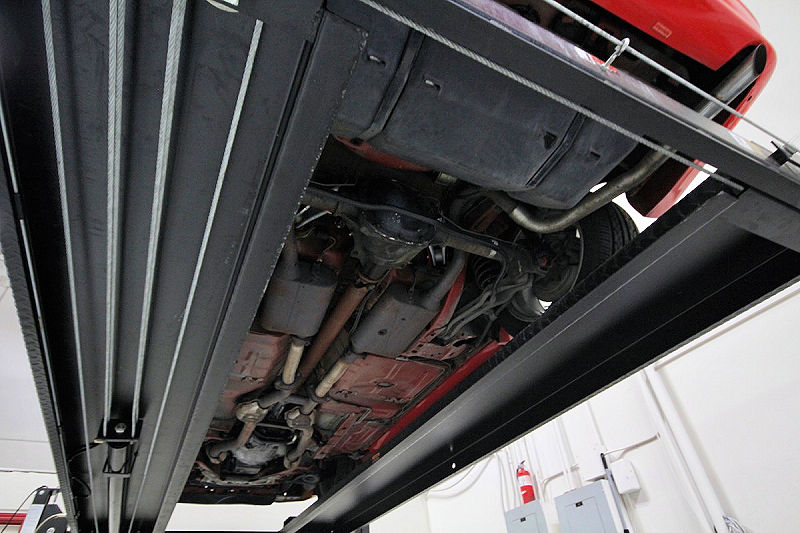 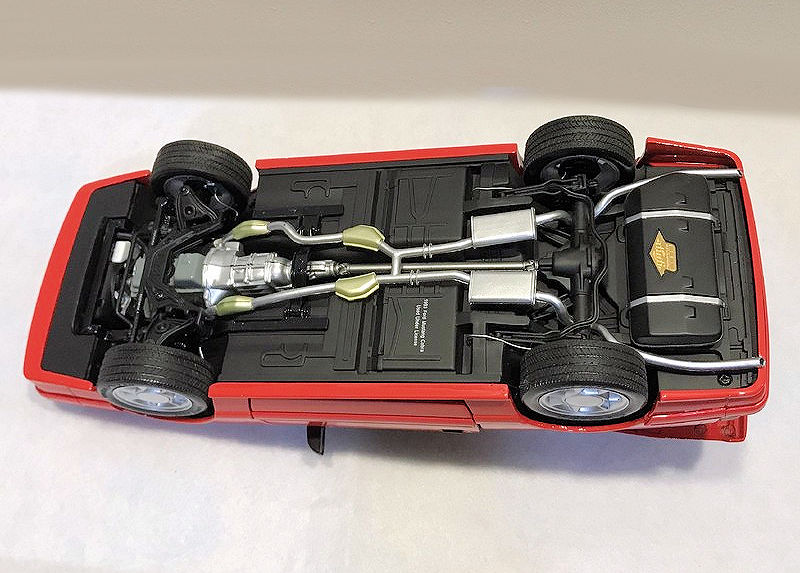 There is nothing exceptional about the undercarriage though the detailing here is generally good as you can make out the drivetrain components and there are functional front and rear suspensions. 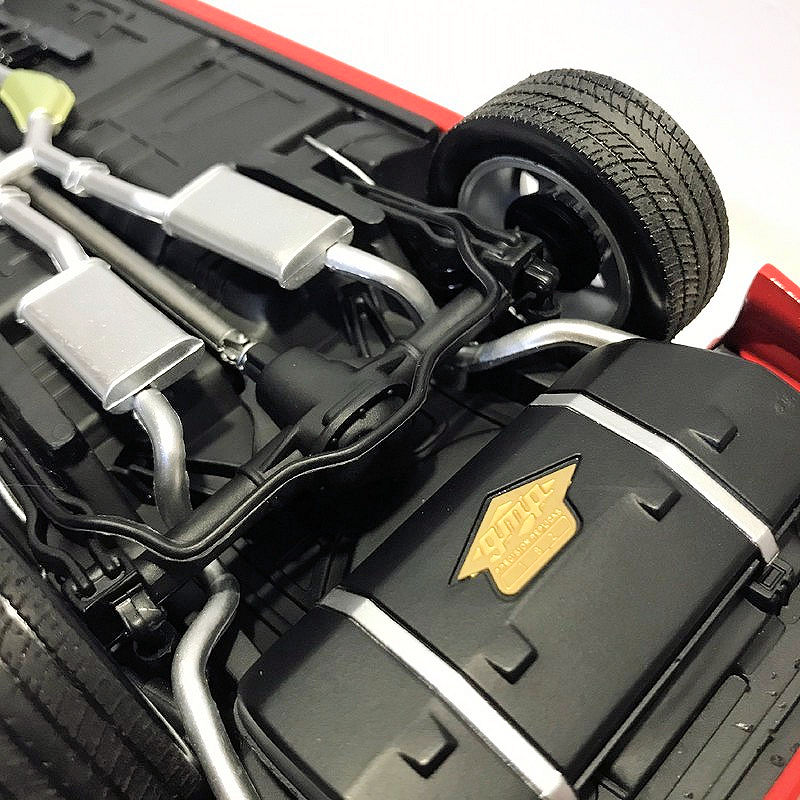 As with most GMP models, every product is serialized via the undercarriage (the gas tank in fact) which I find is a unique touch and lends a sense of artisanal touch to their products. 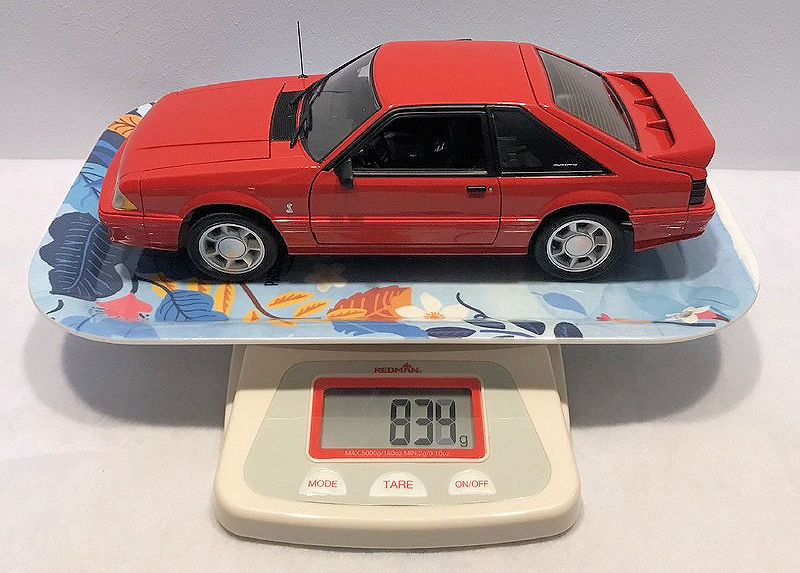 Weighing just a little shy of 840 grams, this is lightweight by GMP standards but for this day and age, a very hefty number. Most classic muscle cars from GMP can easily exceed 1 kilo.

As a Ford Mustang fan, it is difficult not to like this GMP model. The problem with model makers nowadays is that when they reissue an old casting, they usually take out something from the original product, such as opening doors, material substitution and reduced functionality. I am quite glad GMP had not threaded the same path here but also a little frustrated that they had not taken the opportunity to improve the model either, like better headlight detailing and better exhaust tips for a start.

Still, despite the flaws and grievances, it has been well worth the wait and release delays. Get yours now while they are still available. 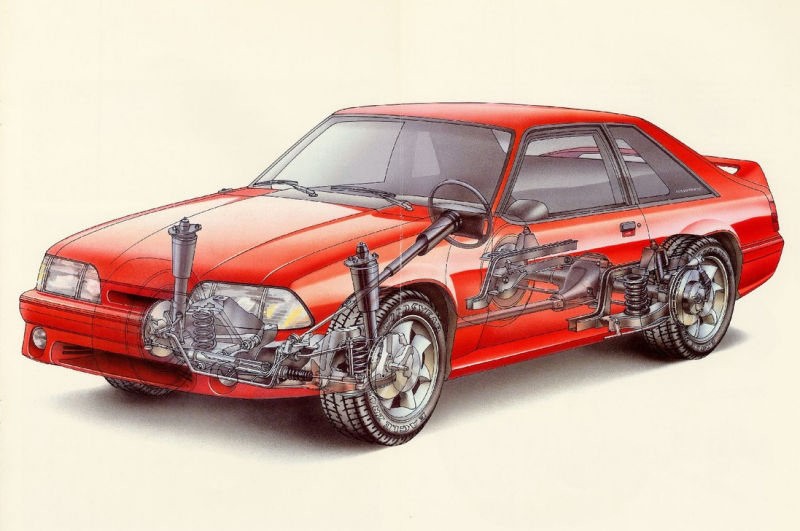 (+) Priced at only USD 139.95, this is one of the best prices for a fully openable diecast model based on an iconic vehicle. I do not see anyone other than GMP making this.
(+) A Fox Mustang. Enough said.

(-) Some design inaccuracies such as the disproportionate headlights and very small exhaust tips.
(-) Slightly higher ride height but which can be fixed if you have the tools and skill.
(-) Limited production quantity so sourcing for one in the future could be an issue if you do not want to dig into it right now.