Just a few months back Chevrolet announced the latest platform for the Corvette, the C8.  The latest rendition of the Corvette will feature a rear-mounted engine for the first time in history.  Before we forget the C7 platform we wanted to introduce you one in scale, the latest 1:12 release from GT Spirit, the Corvette C7 ZR1 2018 in Sebring Orange. 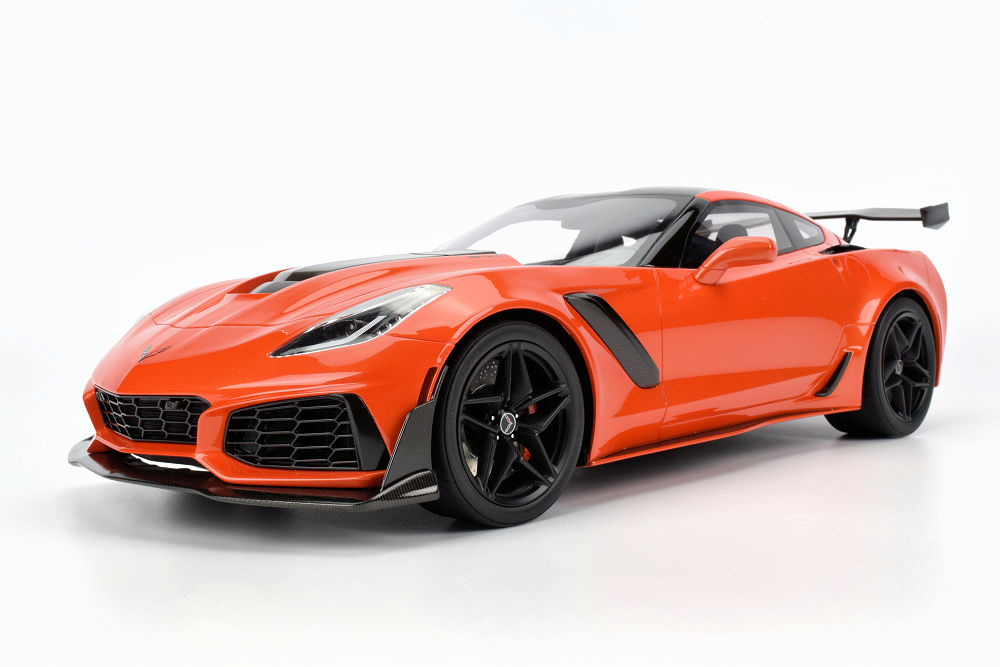 The efficiencies of GT Spirit’s releases are usually measured in 1:18 scale, however, the team does dabble in 1:12 and recently in 1:8 scale too.  The American muscle experience seems to tickle many in scale, especially those that reside in the Western and Eastern hemispheres.  The C7 Corvette produces 755 horsepower and 715 lb-ft of torque with a 0-60 mph measured in 2.85 seconds.  As for top speed, it excels to 212 mph; those are supercar numbers folks!  What is more impressive is the price of about $120K US, which is a fraction of the cost of the immediate competition. 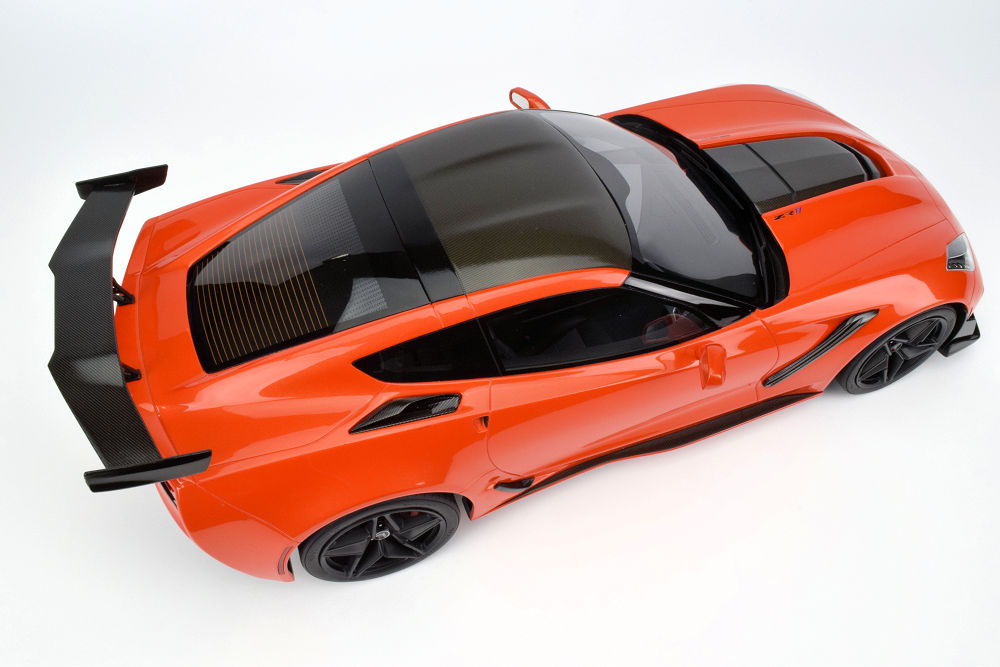 As for the model itself, the Sebring Orange exterior is just beautiful in person. The added Black exterior accents and carbon fibre elements perfectly add to the mix, in our opinion the exterior colouring is superb!

Exterior bodylines and styling cues are well represented, GT Spirit was up for the challenge, and the end results are pretty darn good!  The carbon fibre work is completed with decals, thankfully no moulded carbon fibre technique here! 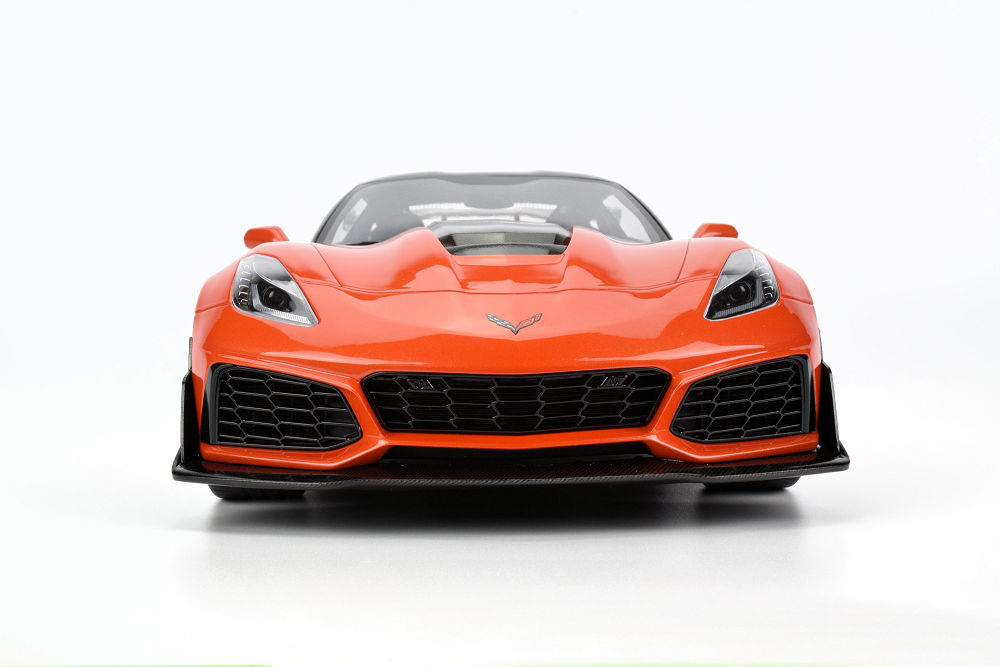 The front is very aggressive, the extended lower chin spoiler and side fins take the lead here.  Nice work on the carbon fibre, however, the team missed extending the Orange paint line from lower side body panel to of the front chin spoiler sides. 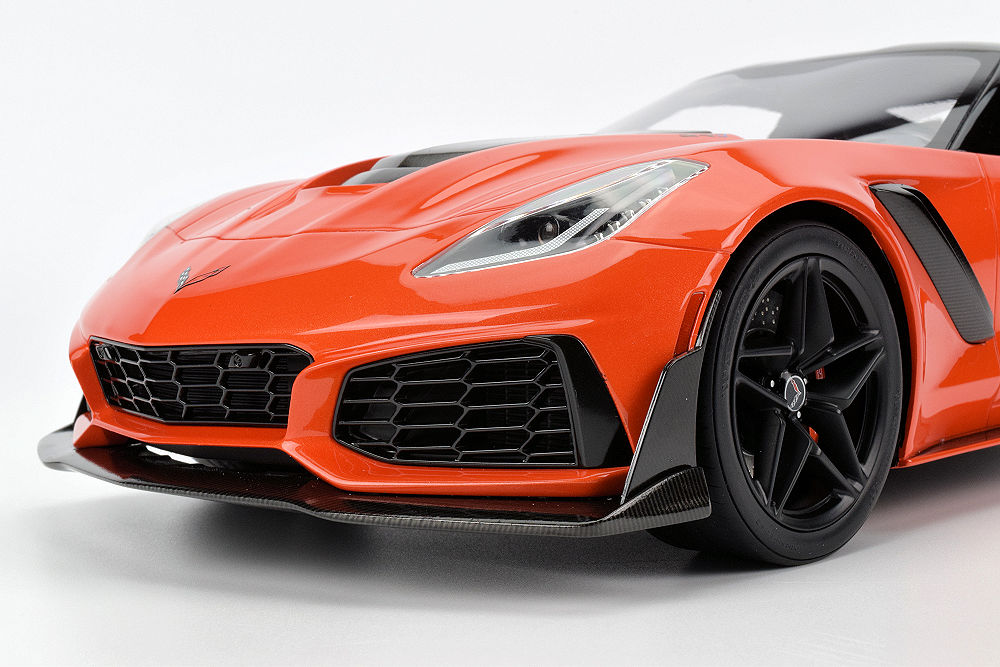 Another nice element is the perforated grilles, each area reveals some detail in behind, though the depth of detail is slightly subdued.  Headlights mirror the original for the most part and each element of the design is clearly distinguishable.  Centre logo is a simple flat decal, we would appreciate something more 3D like. 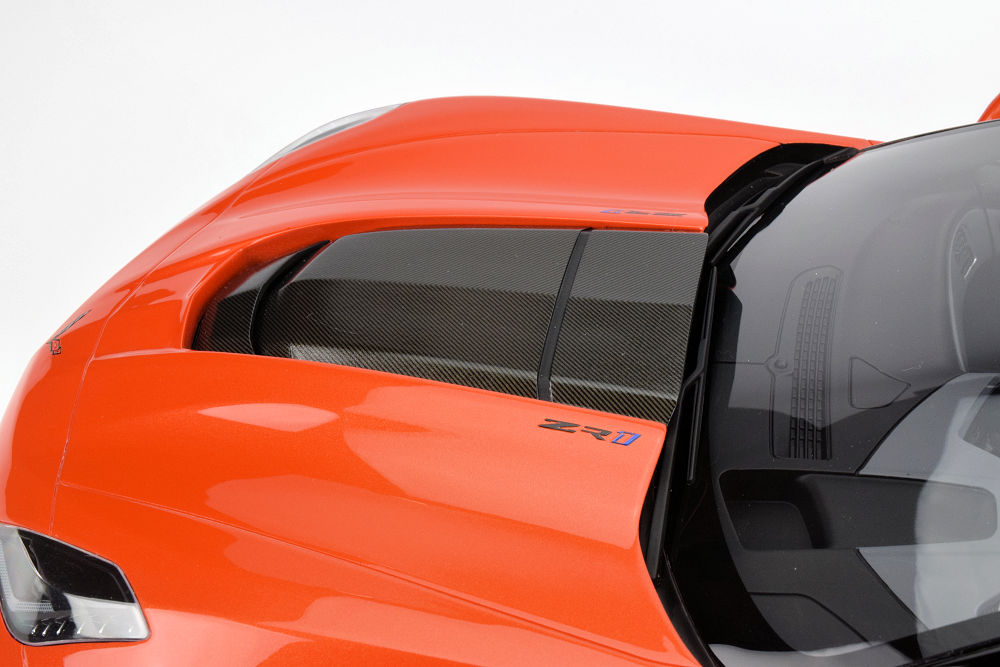 As you move back the massive centre hump on the hood lines comes into view.  Nice work on the carbon fibre and added ZR1 decals on each side.  No access to the motor is available, this is resin and sealed effort.

The rear is as aggressive as the front, the massive upper spoiler definitely takes centre stage.  Carbon fibre work again is completed in realistic decals.  Also, we liked the detail of the four screws to where the upper spoiler section that meets the two braces.  The added detail is appreciated. 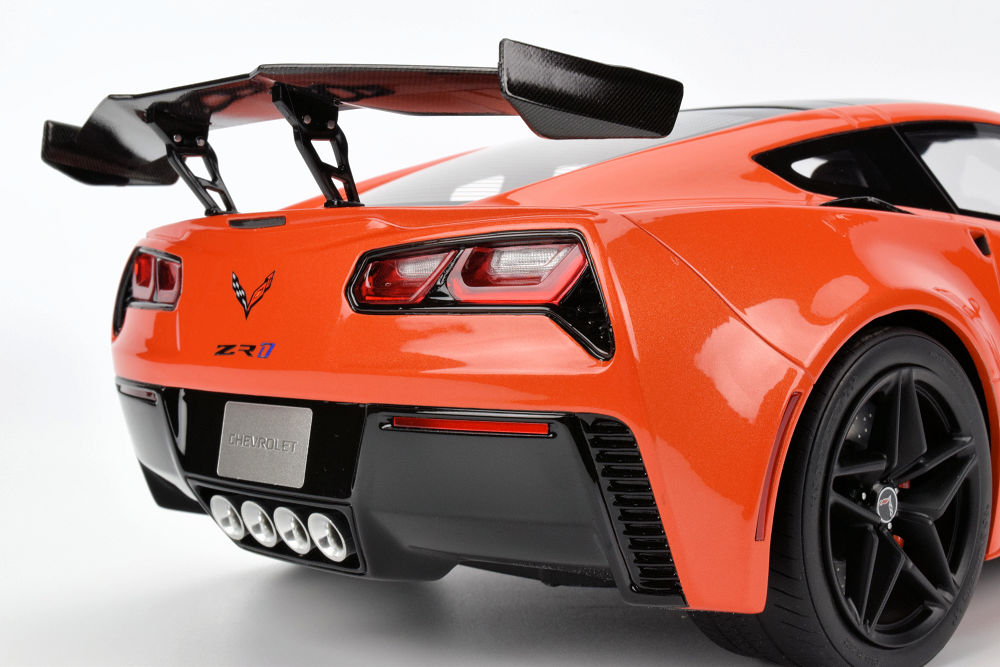 Moving down the quad pipes are pieces of art.  Not sure if they are metal or painted effort, but the end result is spectacular!  The rest of the bumper is painted in high-gloss Black finish, this along with the taillights are executed well.  Finally, both emblems in the centre are simple flat decals. 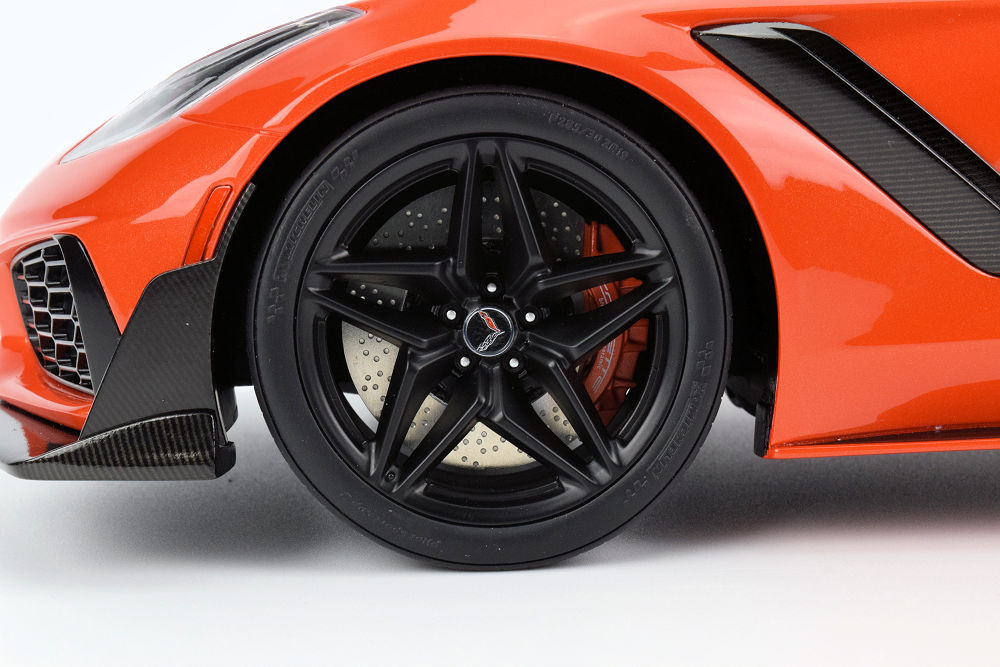 Wheels, for the most part, are in line with 1:1. The Matt-look painted wheels are mated to cross-drilled rotors and massive Red calipers that display the Corvette script.  There are a few misses however, one, we don’t believe the chrome ring around the wheels centre emblem should be there. Two, the ZR1 would ship with ceramic discs, not metal as presented here. 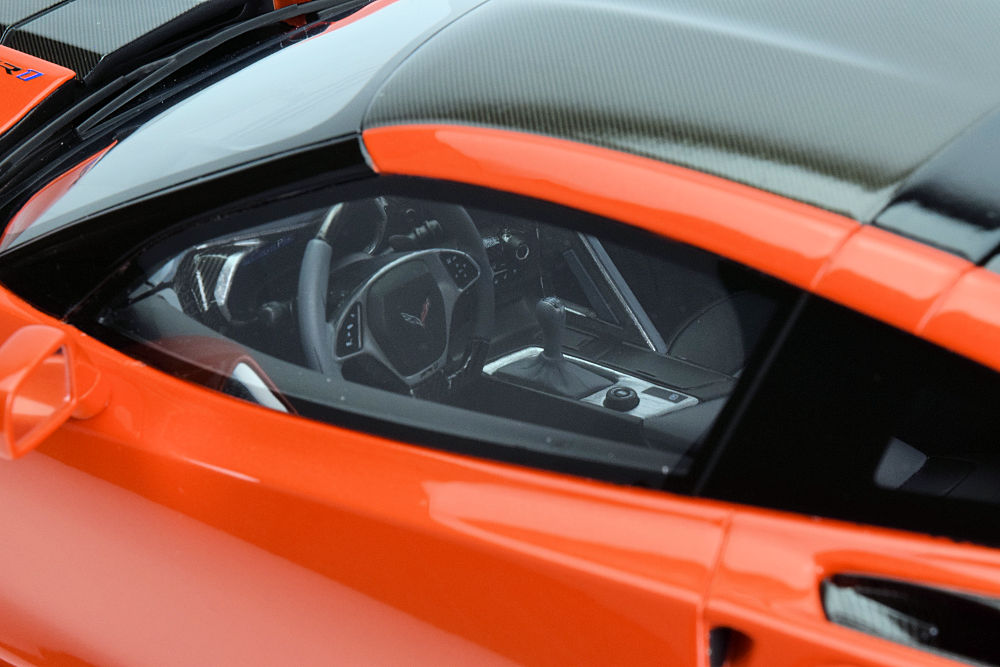 Windows on the Corvette C7 ZR1 are tinted.  Inside the interior touches all the basic elements.  What we like are the added carbon fibre elements added to the dash, steering wheel and seats.  Also the addition of fabric seat-belts.  What we don’t like is lack of overall effort to mimic the various textures and missing is the carpeting/flocking throughout.  Overall the interior is lacking refinement. 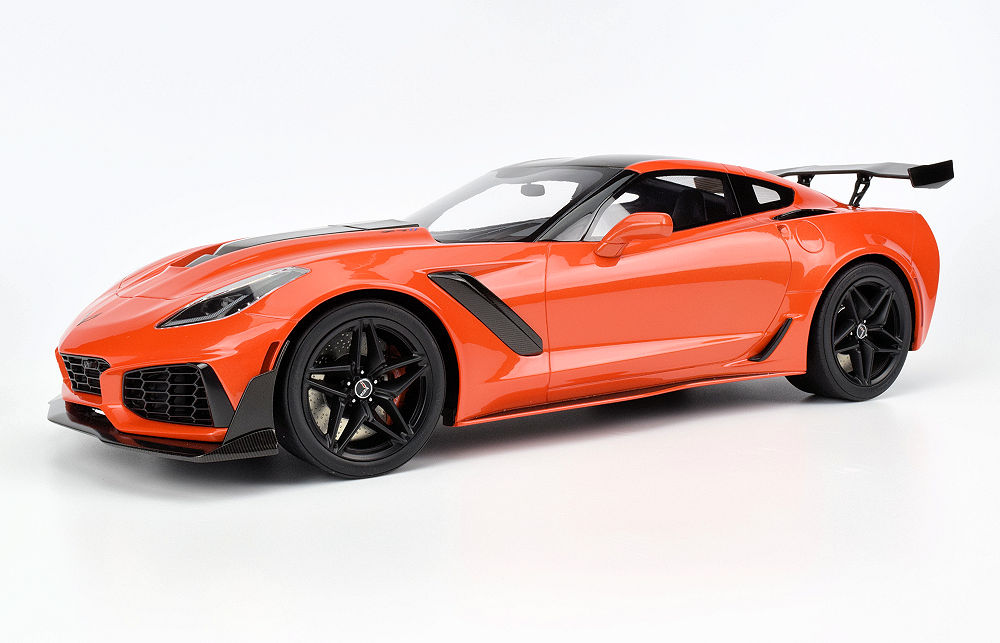 The 1:12 GT Spirit Chevrolet Corvette C7 ZR1 is a dazzling example from the exterior perspective.  Paint work and overall execution are very good based on price.  There are some subtle misses as we pointed out, though they aren’t that substantial from an overall execution.  Where the Corvette C7 ZR1 loses pace is in the interior, overall based on the scale we find it lacking in certain areas.  We need to ask in the question.  Are collectors buying sealed models for the interior or exterior or is it the complete package?  What are your thoughts?  End the end this is a great effort of the Corvette C7 ZR1 in 1:12 scale.  And the price is even more attractive, about $275 CND.  Enjoy the pics!