At the end of 2018, I was able to add the amazing looking Lamborghini LM002 in 1:18 scale made by Kyosho to my collection.  It was finished in Glossy Black over a highly contrasting White interior, it truly is an amazing model.  Very large and heavy, it demands attention in any display case, especially when put next to the low and wide Lamborghini Countach; her counterpart from the Eighties. 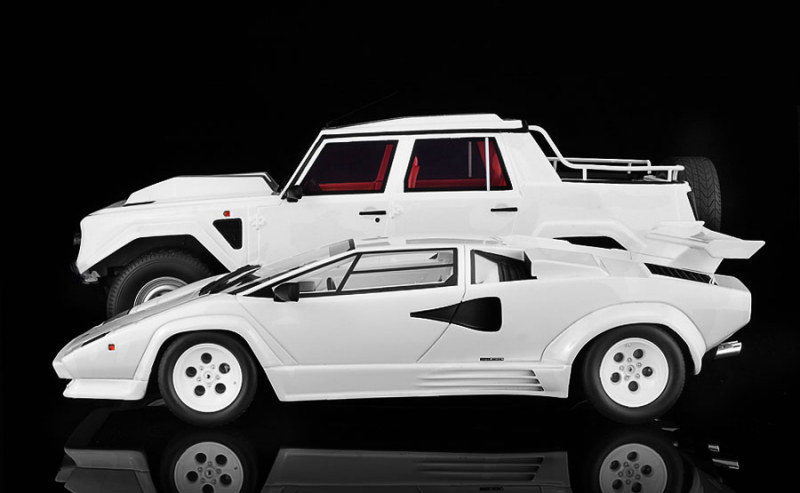 At this time Kyosho usually teams up with GT Spirit for their sealed resin models, usually, the model is the same but the finish is different, in this case, the Kyosho made LM002 came in Black over White while her sibling from GT Spirit was finished in White over a Red interior.  Initially, I wanted to add this latter model as the Kyosho one is usually sold at a premium over the GT Spirit one, but this time I managed to find the Black Kyosho one for a very nice price in the Netherlands. 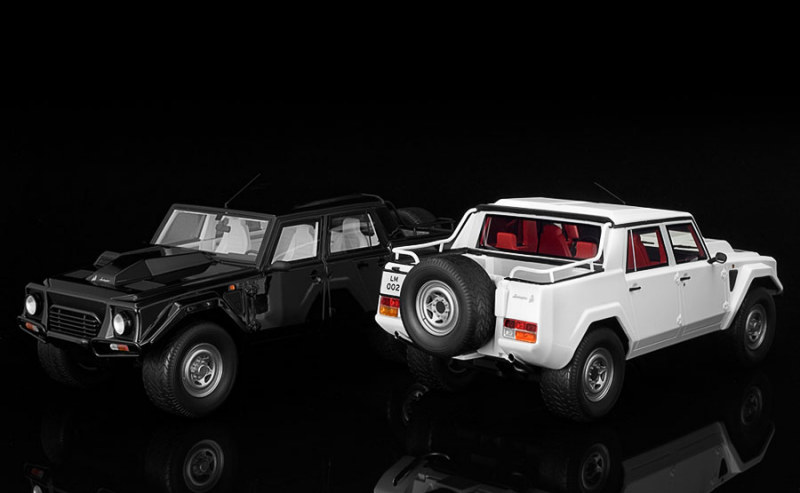 Still, I couldn’t resist adding a second 1:18 scale LM002 to my collection when the price was right, so I now have both the Kyosho and the GT Spirit version to accompany my older, Red TRL fuel injected model.  Three massive, V12 powered off-road vehicles made in Sant’Agata.

As already mentioned in my review of the Black Kyosho made LM002, this is the early version of the off-road Lamborghini with the V12 engine housing six, double Weber carburetors (later on a fuel injection replaced the difficult to tune Weber units) so the engine cover has some massive, angular boxes on it together with two vents up front and an intake on the box at the right. 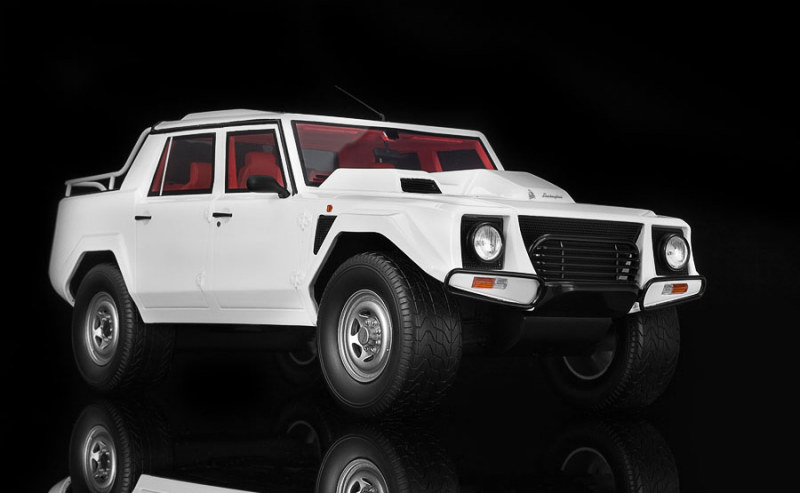 Note that on right-hand drive versions of the LM002 that massive box on the right was moved to the left to provide better visibility for the driver. If you take a close look at the two rectangular vents on the engine cover you’ll notice they are open grilles on these scale models, there is even some detail visible underneath. While this is a sealed model, so the engine cover can’t be opened to view the engine, this is still some very nice attention to detail. 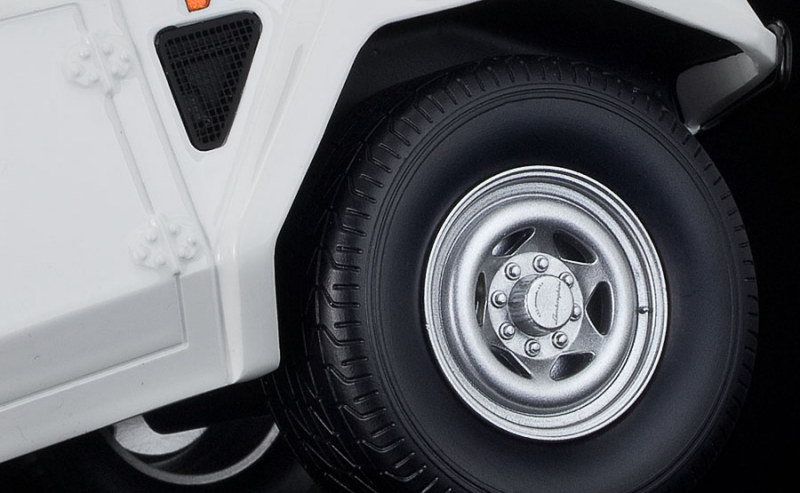 If you look closer at the triangular vent on the front fender, behind the wheel, you’ll again notice this is an open grille with detail behind it.  Very nicely done by GT Spirit, and while my Red LM002 by TRL is the US specs model with the large side lights, these GT Spirit/Kyosho ones are the Euro-spec edition.  Both showing a nice, small orange turn signal on the front fender.

I also mentioned this in my review of the Black Kyosho made LM002, but I still wonder why they decided to put the small bumpers at the front only, GT Spirit/Kyosho got just about all the details right on this scale model but why they didn’t put the bumpers at the rear too is still a mystery to me.  It looks awkward if you ask me. 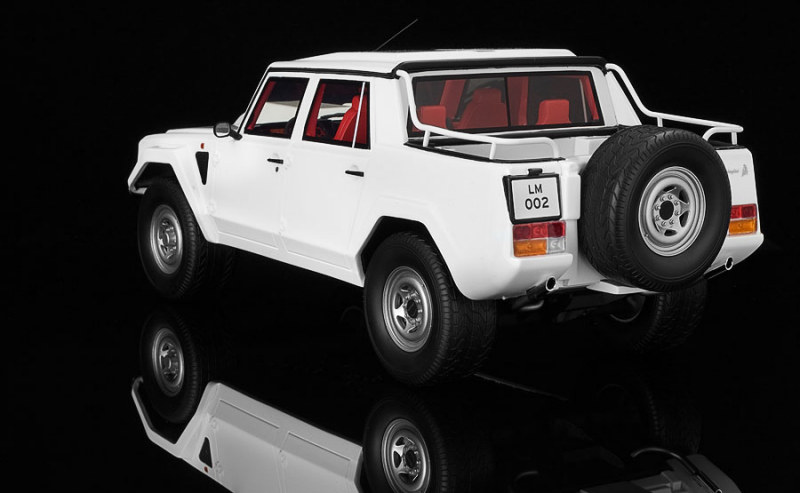 On the Lamborghini LM002, the doors have large hinges visible on the outside.  The same on this scale model.  I have to admit this White one comes with a thick coat of paint, maybe just a little too heavy, but I guess that’s the downside of a resin model with such intricate details as hinges and screws on the doors, still I really love the look and feel on these massive LM002 scale models. 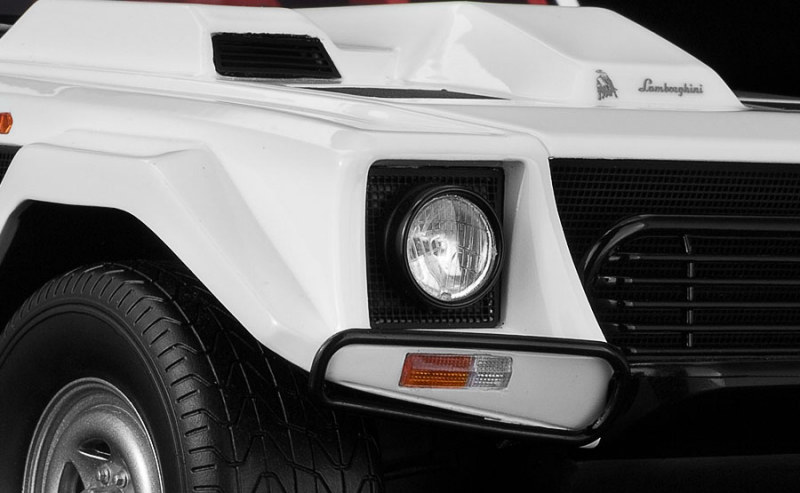 Which brings me to one thing I don’t like about these 1:18 Lamborghini LM002 it is the back seating area. On the sides there are pads that replicate the additional seats on the real car, these are simple, leather wrapped cushions above the rear wheels, and on these scale models, they look good.  Then you see the diamond plating GT Spirit/Kyosho went for and it looks terrible, it’s just a print, there is no realism on it at all.  If you think about all the attention to detail on the vents, intakes, hinges and even the wheels.  They took the easy way out on the diamond plating and that’s a pity, to be honest. 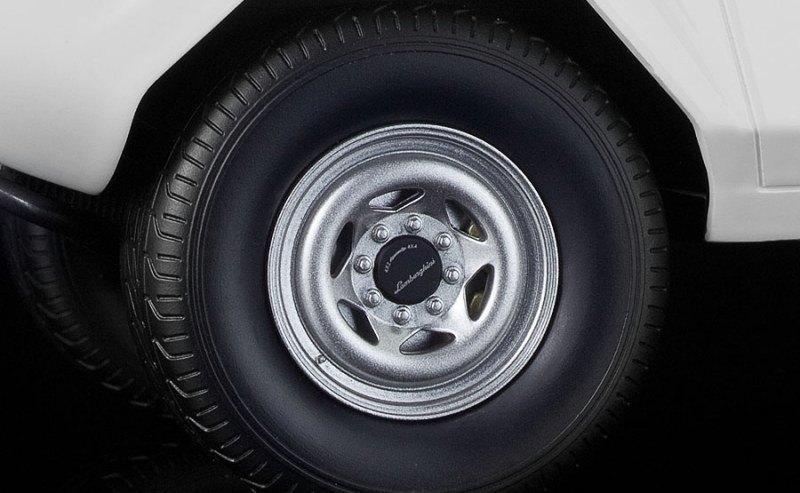 Back to the wheels now, and they correctly put different hubs at the front and the rear of this Lamborghini LM002.  There is a massive lever inside the car next to the massive central tunnel to engage four-wheel drive, but you’ll still have to use a massive range to turn the hubs on the front wheels.  This has been perfectly replicated on these 1:18 scale models, even down to the scripting on the hub itself!

I didn’t even notice it on the Black Kyosho made LM002 model, but there are even disc brakes and calipers hiding behind these steel wheel replicas with gold finished calipers mind you, amazing. 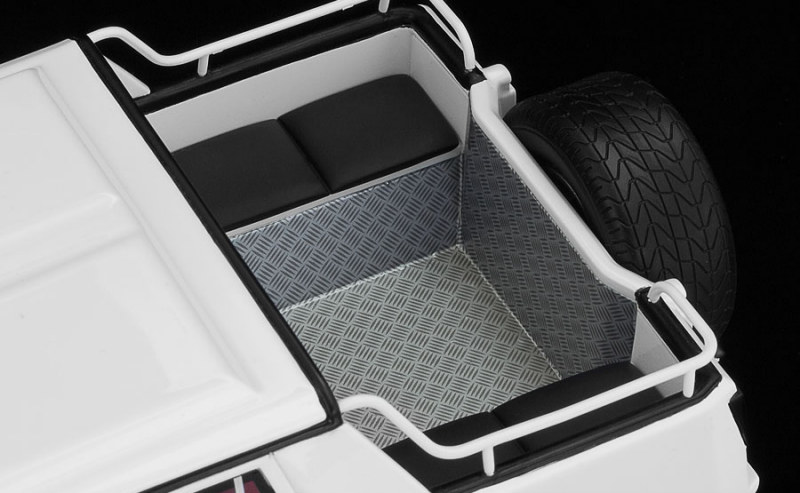 As much as I like the White interior inside the Kyosho edition I have to admit I love this Red interior more, not too sure about the wood inlays combined with Red leather, but that’s the way it was on the real Lamborghini LM002 too.  Once again all those buttons on the central console are there, even the gear position on top of the gear lever is readable.  How’s that for the fine print.

You can read the Nardi make on the steering wheel and if you look really close you might even be able to see the mileage on this scale model.  That’s how detailed the interior print is inside these LM002 and just as it should be.  The classic eighties radio/cassette player is mounted on the headliner between the two front seats.

If you would ask me to choose between the Black Kyosho made Lamborghini LM002 and this White GT Spirit edition I would seriously have a hard time deciding.  Both are amazing to look at, the Black one is intimidating while this White one just has an amazing presence to her. 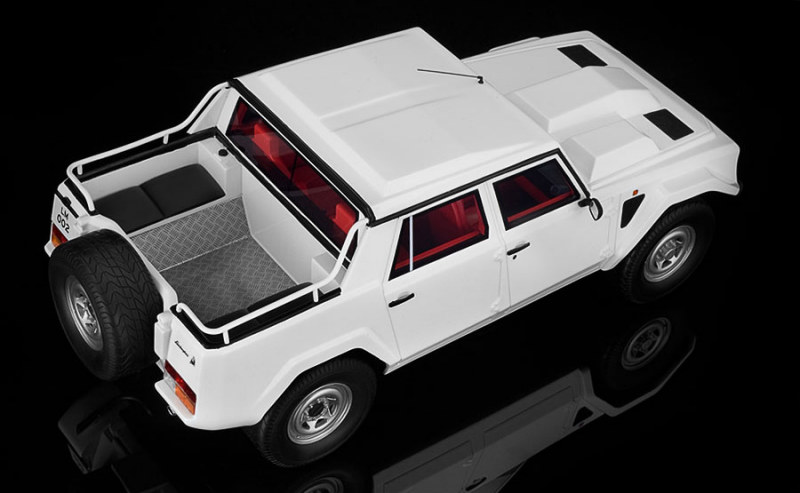 I have this one on display next to the GT Spirit made Countach Quattrovalvole, and I just love the massive contrast between these two.  Both from the eighties, and both so different from each other, but still so related to each other at the same time.

I might state that this White over Red GT Spirit made Lamborghini LM002 looks just a little better than the Black Kyosho one because she shows the Black vents and trim a little better than her dark counterpart, but that Black over White looks so stunning too.  Fortunately, I was able to add both to my collection.