One of the latest efforts from GT Spirit is their version of the rare, Porsche Speedster 964 Turbo Look.  There has been some debate about how many of these beauties actually left the factory floor.  Initially, 3000 were to go into production, but alas only 15 were produced, though some say even less.  The Porsche Speedster 964 Turbo Look is an upgraded version of the standard narrow Speedster 964.  The immediate visual characteristics include the widened fenders, larger wheels and upgraded brakes.  There were some performance enhancements too, I’ll leave various Porsche resources to elaborate on them. 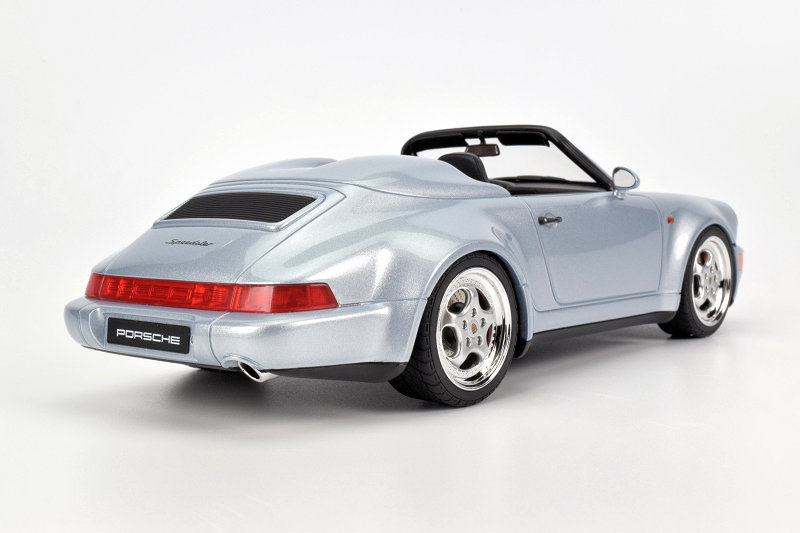 If you aren’t in the know, one of GT Spirit’s early on releases was the standard Speedster 964 in Red, and later the Yellow was introduced.  I have the Yellow release in my collection so making comparisons will come in handy.

GT Spirit officially released the 1:18 Speedster 964 Turbo Look we see here back in May of 2019.  The Polar Silver exterior is mated to the nearly all-Black interior, more on this later.  There isn’t much reference material online, so finding photos to compare scale were few and far between.  As for overall bodylines and definition, the model speaks well. As with resin and sealed examples panel gaps and shutlines are always near perfect. Where resin in general lack depth is the definition of the gap line. 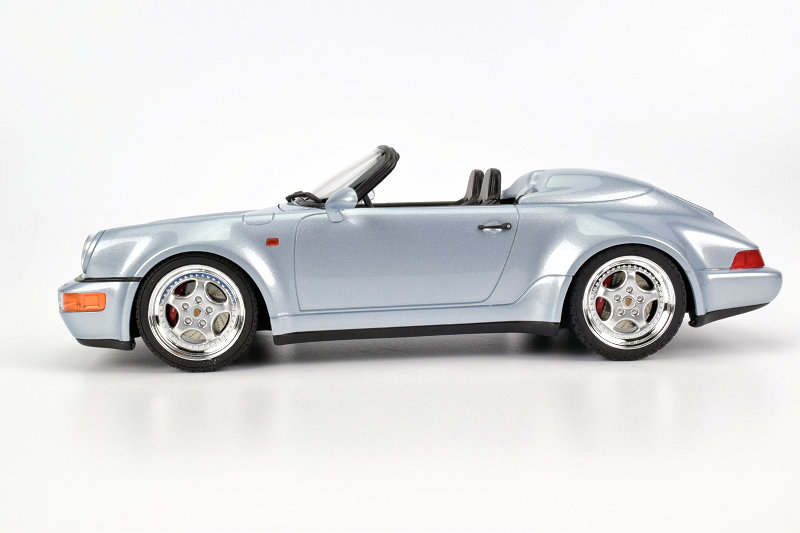 Our model overall is good.  However, the definition of the trademark rear roof cover could have used a little more finesse.  Also, the body kit/part of the lower rocker panel is a little too subtle and flat.  As for paint and workmanship, the Polar Silver exterior looks and is executed extremely well.  This is nothing out of the norm for GT Spirit. 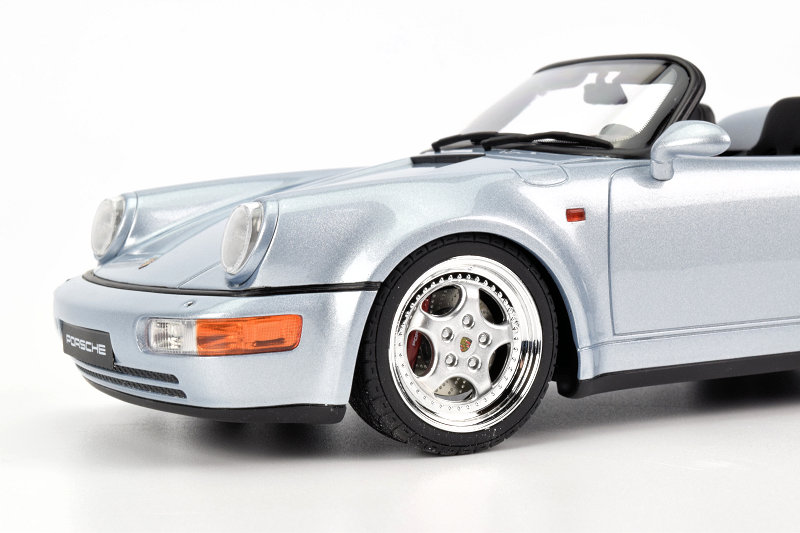 Moving to the front the car still remains typical Porsche in design.  The slight hint of enlarged fenders differentiates the car from the narrow version.  Lower bumper and related elements like indicators and running lights are executed well with quality materials.  The headlights are on par and there are headlight washer nozzles located in the upper section of the bumper. 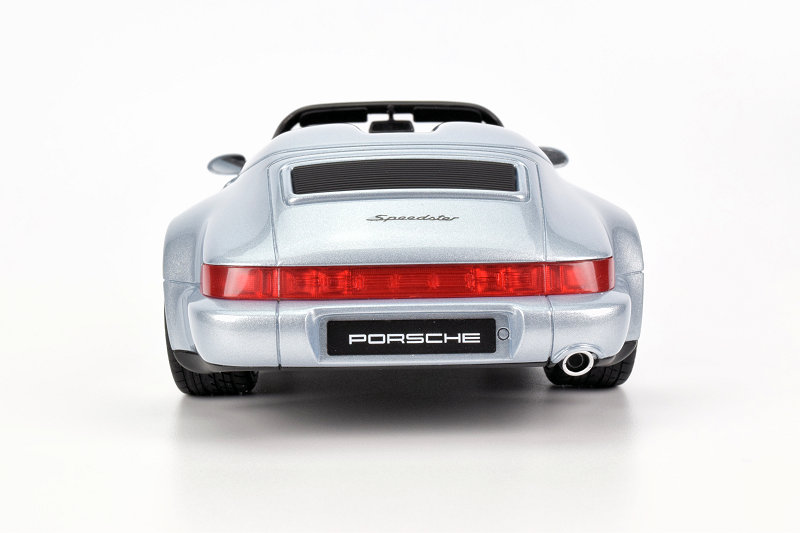 The turbo look comes out in full force from the rear half of the car.  GT Spirit does a great job in integrating the widen fenders into all aspects of the rear panel work.  A single exhaust tip is found on the lower right side. 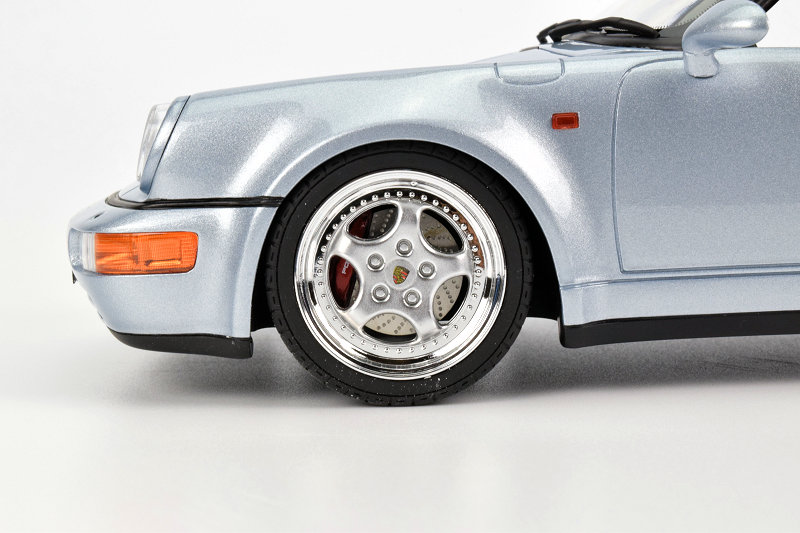 Wheels are delicious, each painted in chrome.  As per original spec, these should be 17-inch rollers.  This Porsche wheel design with the two-tier lip lends visually to a larger overall look.  We love them!  Behind the wheel, you’ll find cross-drilled rotors and Red calipers imprinted with the Porsche name.  In one word, fantastic!

The interior, for the most part, is Black.  Hints of Red are found on the dash, behind the seats, on the door cards, seat-belts and various trim pieces.  Interior flocking is present and fabric seat-belts too.  One difference from their original narrow body release is the grab pull look on the door.  The earlier version is more realistic with a loop design while the new present a flat strip of material only.  Nothing huge. 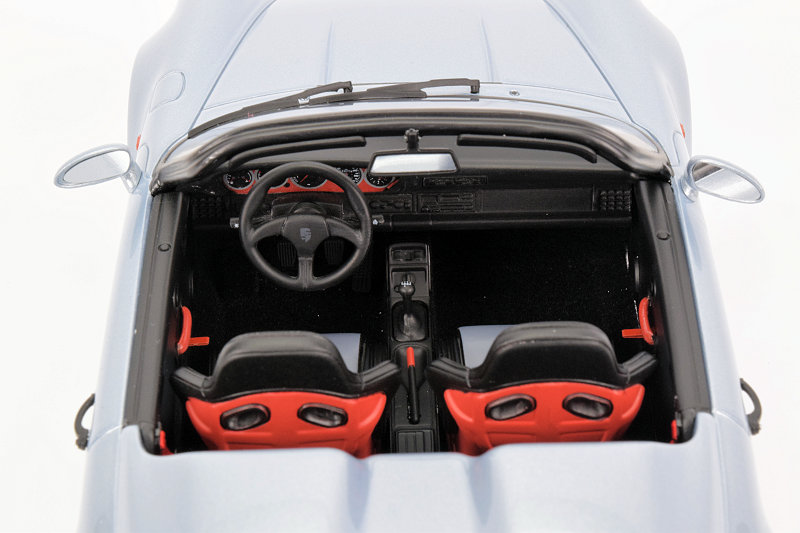 Also, the definition of the dash elements in comparison with higher-priced sealed/resin offerings is somewhat lacking.  But based on their price point and target audience the interior overall gets very good marks. 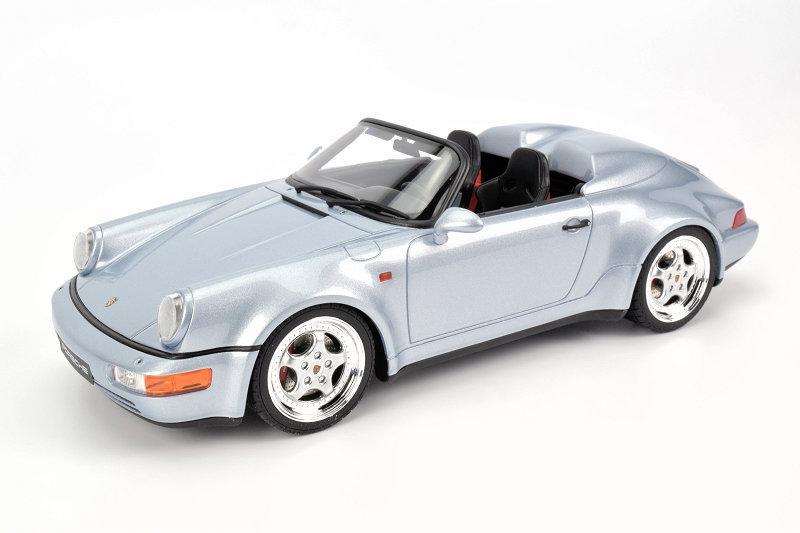 Based on the rarity factor alone this model of the 1:18 Porsche Speedster 964 Turbo Look comes recommended.  GT Spirt provides collectors with great value at a decent price.  Highlights are excellent paint, very good overall design, great execution of the wheels and very good interior.  On the shelf, the model looks great! And side by side with the standard Speedster 964 it provides great conversation with friends, fans and family.  Enjoy the pics!