The classic British sports car styling is definitely found within the Austin Healey.  Over the years Kyosho has brought to market a number of models that featured the same marque.  Their latest venture is the new Austin Healey MKI Sprite in 1:18 scale.  The Austin Healey first appeared in 1958.  The Sprite was affectionately referred to as “Frogeye” due to the open headlight style.  Some have also noted the similarities with the first-generation Mazda Maita, yes we can see similarities.

Kyosho’s scale version features a full diecast metal body that extends to the undercarriage.  Access to the motor and interior are included, however, no removable roof is provided.  And to be honest, this example looks much cleaner with the roof down.  The Austin Healey Sprite here features an Old English White exterior (a hint of Yellow), additional colours include Speedwell Blue, Red and Green. 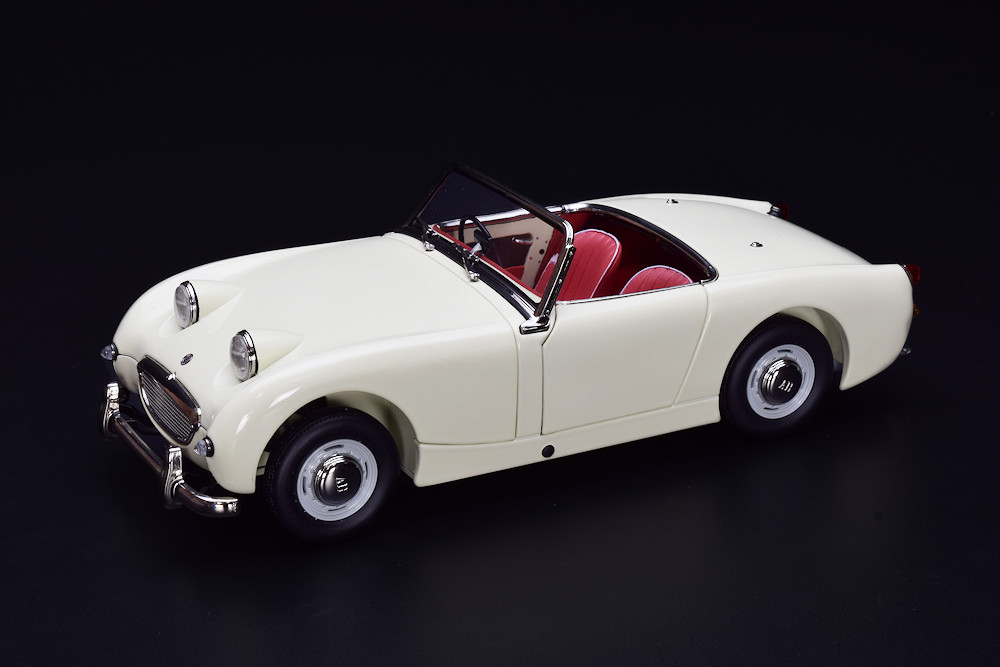 As one would assume, opening the box the initial impressions are how small this Austin Healey is.  It stretches no more than 7.5 inches.  Small, compact and light, that is what drove these classic sports cars!

Let’s start with the paint.  Application on our example is excellent, this incudes thinness and transition elements from front to rear.  Chrome is part of the conversation too, and Kyosho is still on point here.  As for overall body lines, we’re more than satisfied with Kyosho’s depiction.  And finally, shut lines and panel gap are stellar on this example too. 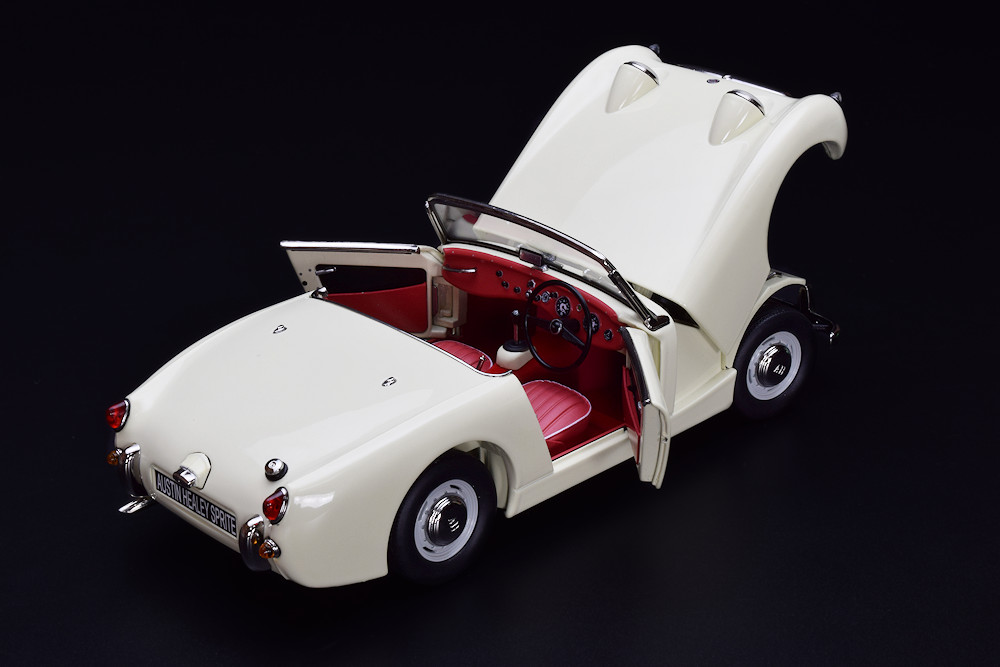 The exterior on a closer level.  You’re not getting the detailed workmanships on the front windshield when it comes to noting the various hardware for the base or the surrounding perimeter of the cockpit opening, though Kyosho did apply dotting to the upper dash area – see interior photos for more definition. 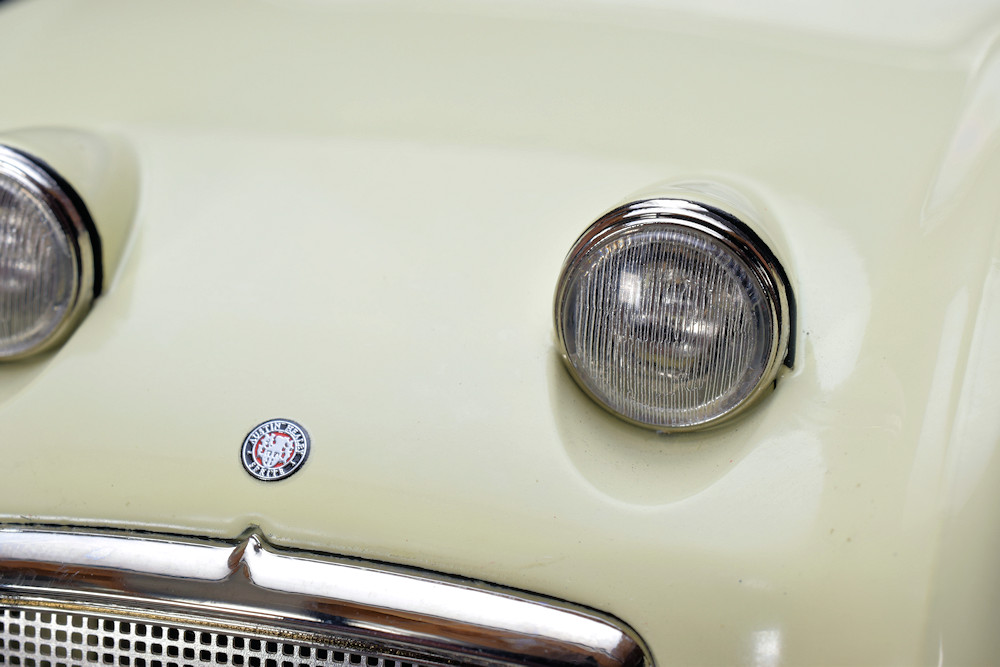 The front of the Auston Healey with its happy-go-lucky appearance is for the most part beautifully executed.  The chrome bits are quality.  The centre grille is metal and perforated.  Headlights and turn signals mirror the original well and the centre emblem is crafted as a photo-etched piece, 3D-like in appearance. 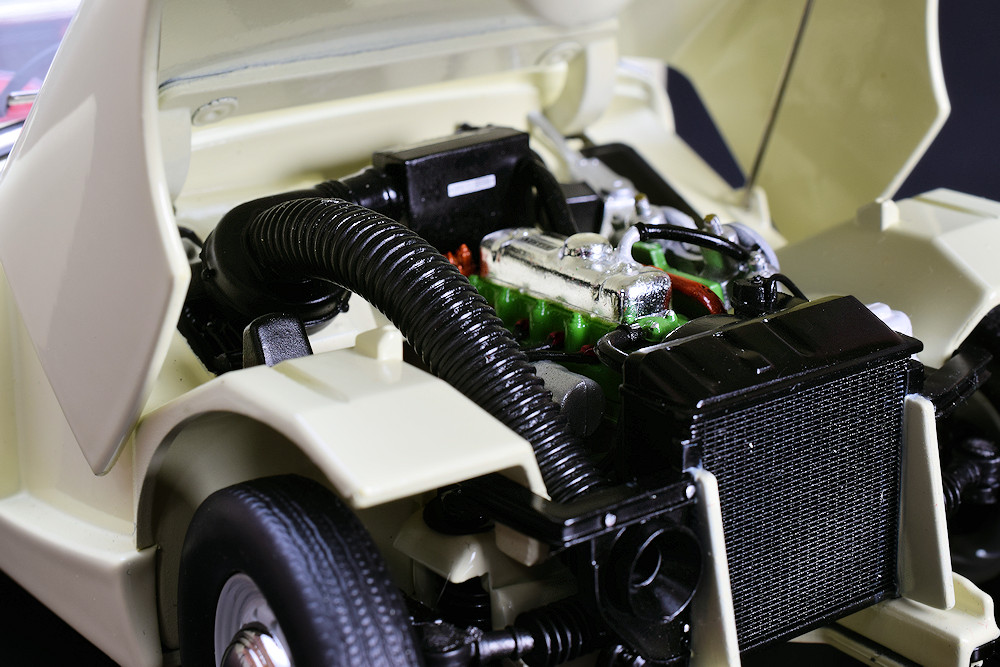 Access to the motor is permitted, opening and closing are completed without issue.  Kyosho supplies two prop rods on either side to fix the hood in the open position.  As for motor look and finish, we find it mirrors the original car well for the most part.  Though the finished look is somewhat on the plastic side.  Though props to Kyosho for the added colours, wires and supporting bits to provide some substance. 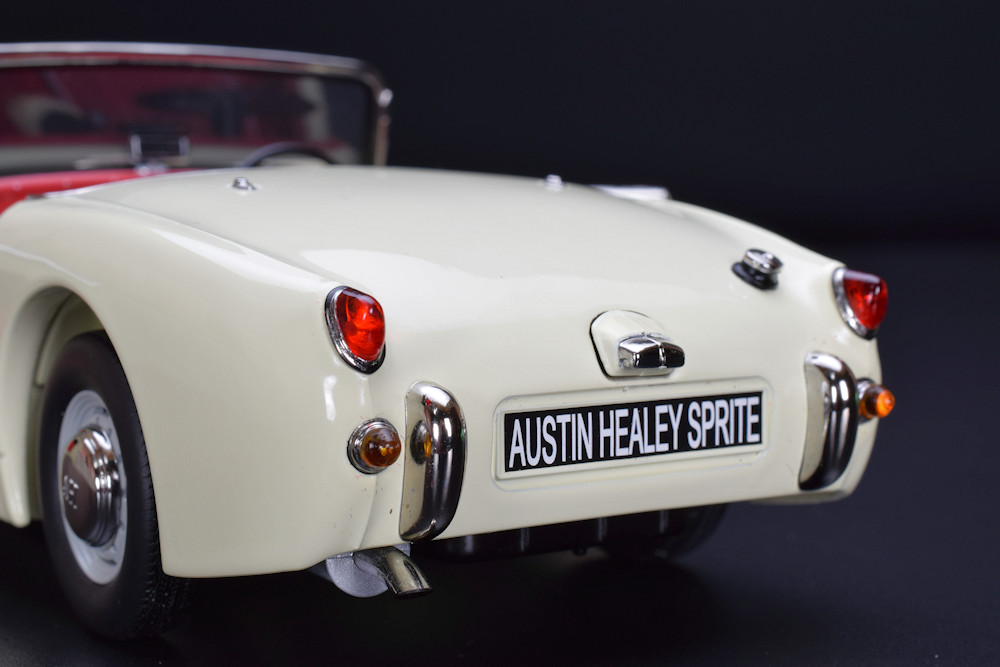 The rear of the Auston Healey is seen with taillights, turn signals, centre plate light and bumper stops.  Each element mentioned are finely crafted and mirrors the original car well.    There is even a metal gas filler on the upper right.  A possible miss, and we’re not sure if this is true or false is the absence of the Sprite badge on the left side.  Not sure if the badge is optional at delivery.  Anyone? 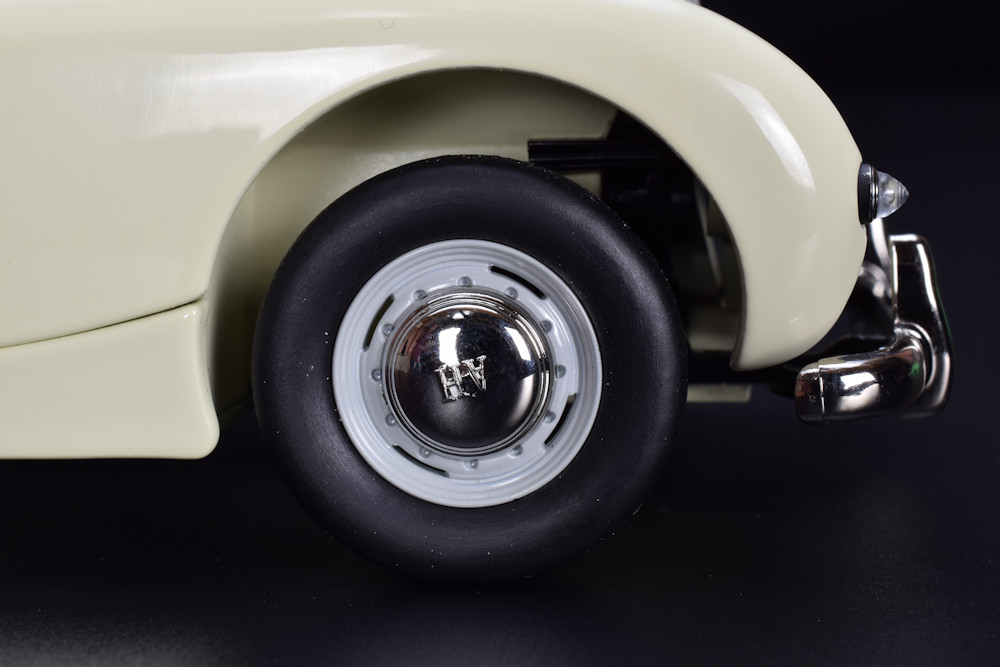 Before we head to the interior let’s take a look at the wheels.  Overall good marks for capturing the style of the period.  Chrome work on the centre caps is brilliant and does feature the AH logo in the centre.  If we could change one thing, possibly the offset on the centre core of the rim is too short.  Also, some may state the stance of the car sits too high.  This is likely to the active suspension at all four corners Kyosho implemented.  This is a good thing for those that display their pieces long-term.  Finally, front wheels do steer but this feature is not linked to the interior’s steering wheel. 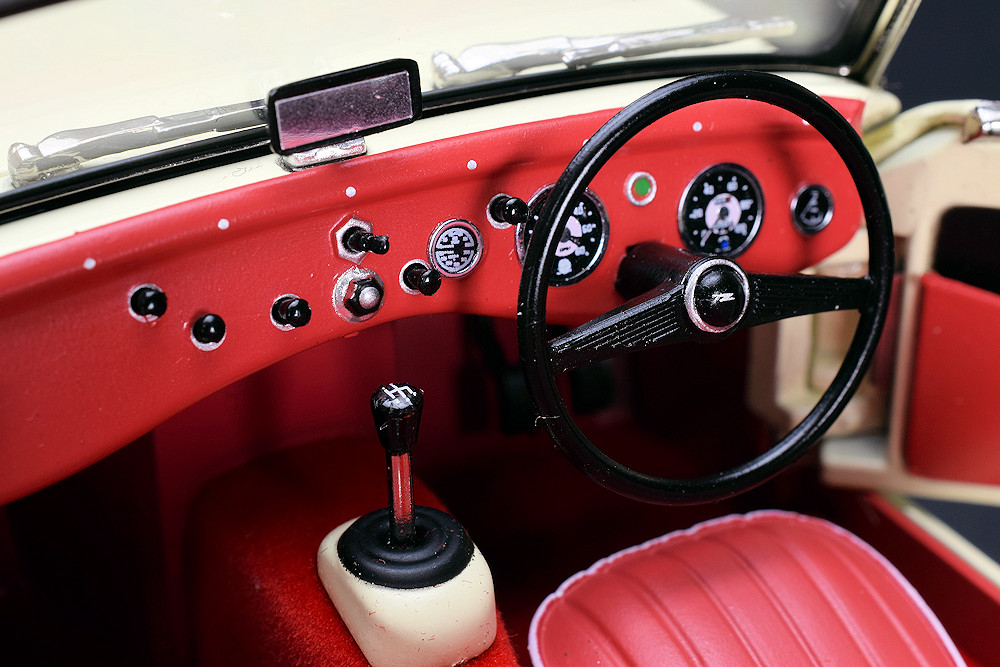 The interior with the Austin Healey Sprite in our opinion is more complete finish-wise than the previous model from Kyosho we reviewed, their 1:18 Jaguar E-Type.  The Red interior looks brilliant against the White backdrop of the exterior.  Dash elements are nicely detailed throughout, even the upper dash as mentioned earlier has the doting for the removable roof.  Door cards are nicely trim and this extends to the Red flocking throughout the interior side.  A bonus item we stumbled upon by accident is the spare tire is also included in the rear storage.  Access to is directly behind the two seats.  Speaking of seats, these are quality pieces that actually provide a tactical feel.  Well done, Kyosho! 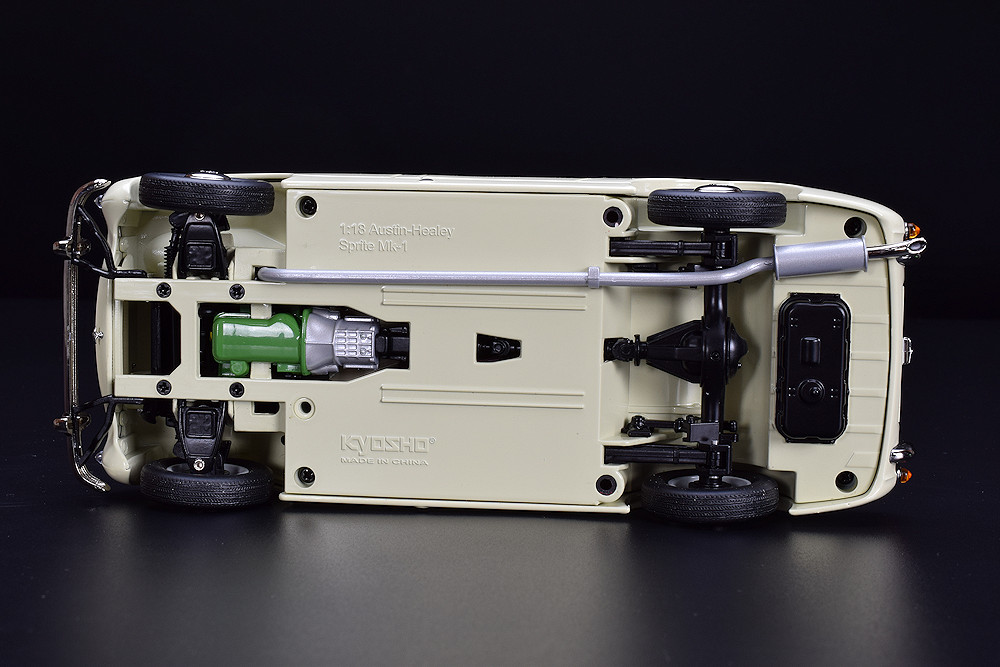 The underside extends the fun!  As mentioned, the base of the Austin Healey is complete in all metal.  Views on the suspension components along with the front and rear drivetrain are available, and each element looks the part too.

The Austin Healey Sprite is truly a little gem from Kyosho.  The results are pretty awesome overall.  With four colours to choose from, there should be something for many to enjoy.  The quality interior excels over some sins from their Jaguar E-Type.  Along with the ability to access much of the internal bits the model should appeal to those that appreciate classic British cars or sports cars in general.  Enjoy the pics!