Many people know the Lamborghini Urus, the Super SUV being built in Sant’Agata at the time of writing, and most also know this wasn’t the first off-road vehicle Lamborghini made, the massive LM002 from the late eighties is usually also admired but this Rambo Lambo is she was sometimes called wasn’t the first 4×4 model either.  That honour goes to the 1977 Cheetah, that’s right, there was a single prototype of an off-road 4×4 vehicle made in an attempt to reach a high volume deal with the US Army, but that sadly never materialized and the US Army went with the Hummer instead. 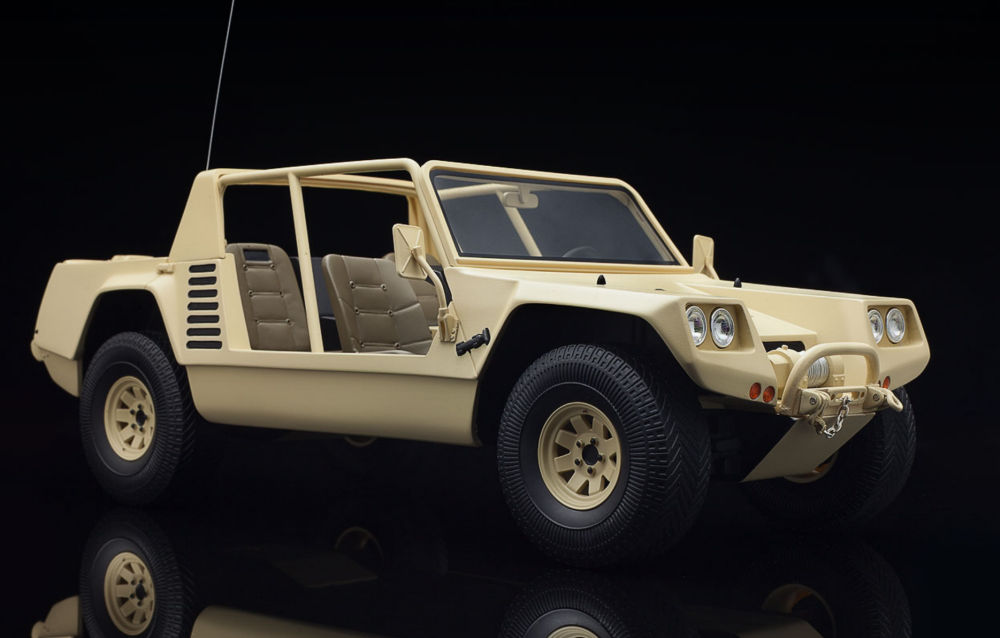 But that’s not the entire story, while the 1977 Cheetah did have a Raging Bull logo on the front, and the one of a kind prototype was shown on the Automobili Lamborghini SpA stand at the ’77 Geneva Motor Show.  The car itself wasn’t built nor designed in Sant’Agata. The Cheetah was designed and built by MTI, Mobility Technology International located in the United States, it was shipped to Italy in early 1977, but later that year it was returned to the United States for ‘field testing’.  Where the prototype reached a top speed of 170 Km/h (105 Mph), a very impressive number back in the Seventies.

The intention was to reach a deal with the US Army to supply hundreds of Cheetah over the following years, and those would actually be built in Sant’Agata and then shipped to the US, but the deal fell through and MTI got stuck with an, at that time, worthless prototype.  They sold the entire Cheetah project to Teledyne Continental Motors. Lamborghini was still involved, and Teledyne started working on three additional Cheetah prototypes, but in the end, Lamborghini didn’t manage to find any other military force that would buy the Cheetah and the project was cancelled.  Only one Cheetah prototype was fully finished, and no, it wasn’t lost in an accident as was rumoured for many years. 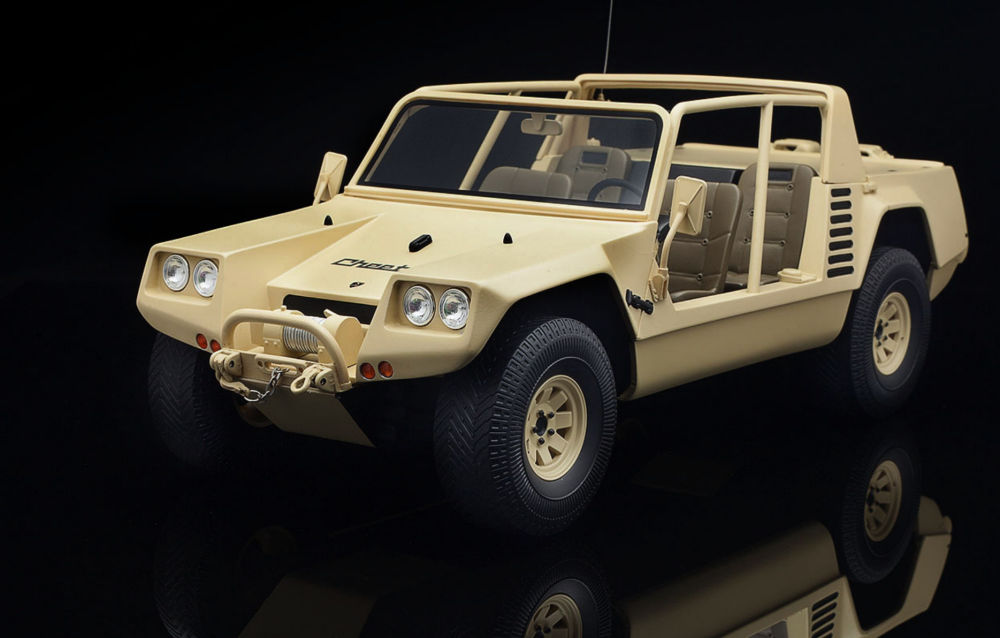 Today the one of a kind, the original 1977 Lamborghini Cheetah has been restored and was put on display at the official factory museum in Sant’Agata, next to the LM002 (not sure if the Cheetah is a permanent resident of the museum, or if she is owned by the factory).  It is safe to say the Cheetah is the real grandfather of the current Urus.

When I learned GT Spirit would be releasing a 1:18 scale model of the Lamborghini Cheetah I was really impressed, this is a rather unknown car in the history of Lamborghini, so deciding to make a scale model might be a risky move, but I was happy…  This would be a ‘must-have’ for my collection, so I quickly put in a pre-order for it… albeit the Kyosho version, as the latter would be the original tan finished one, the GT Spirit would be a dark painted version with white wheels. 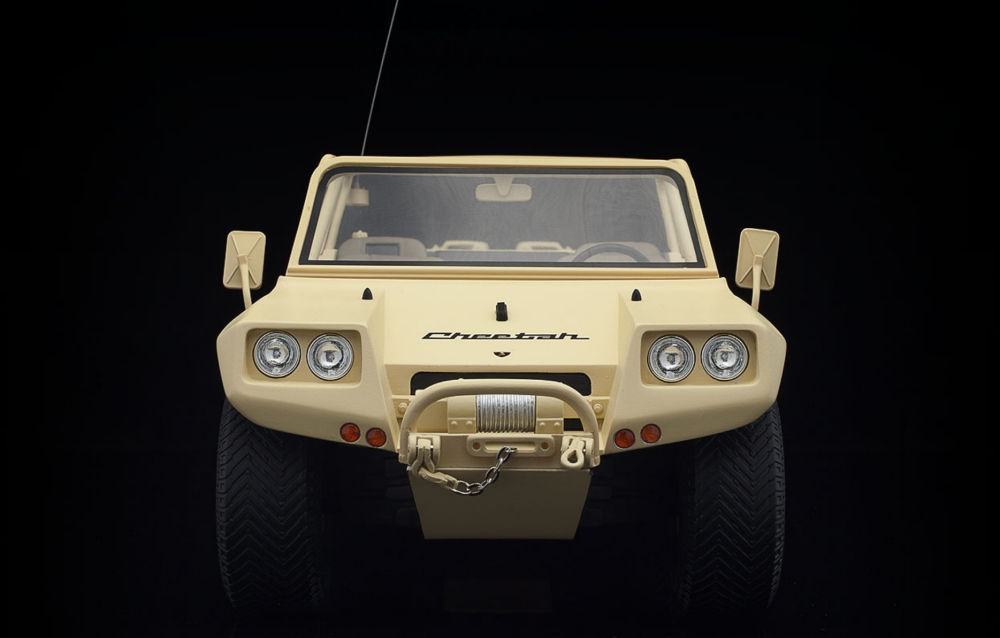 Under the Kyosho label, they made a total of 900 units of this tan finished model, I ended up with number 741/900, note that the GT Spirit counterpart only had a production run of 250 units, so it’s a lot more limited in the end. But I prefer this one, being a near-perfect replica of the actual Cheetah prototype.

Being devote of a roof and doors, the fact this is a sealed resin model isn’t so troublesome, sure it would have been nice to be able to see that Chrysler V8 engine in the back, but other than that there isn’t much to find underneath the front and rear sections, which are hinged similar to the Miura.  The front part of the body tilts forward while the rear tilts backward on the real car. 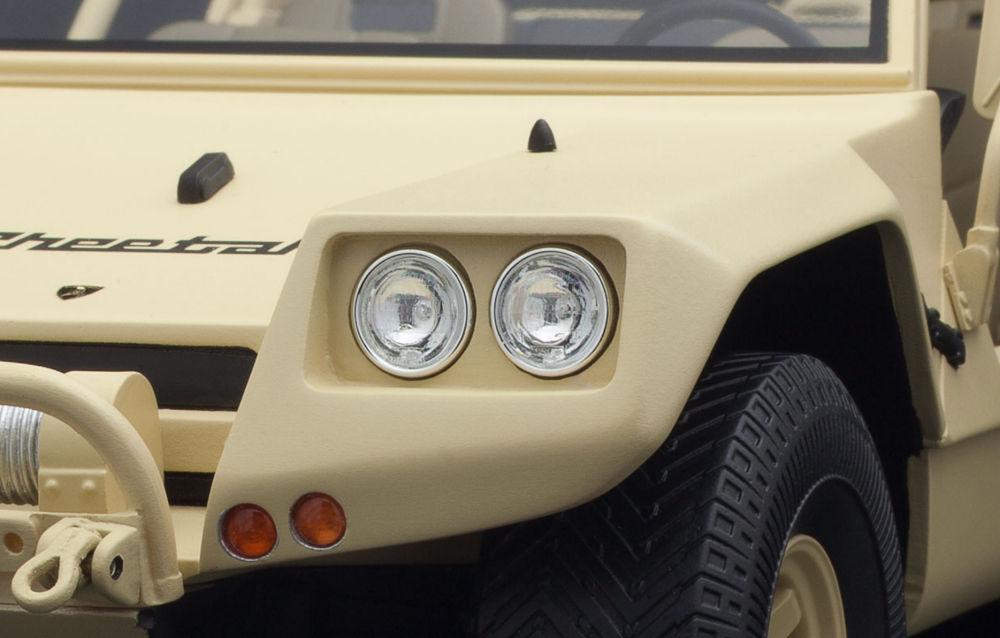 As this is a 1977 prototype for a military vehicle, there aren’t many intricate details or fine chrome parts, so this 1:18 scale model is in fact very close to the real deal, the front hood is kept shut with black ‘spanners’, there are two fuel containers mounted at the rear, complete with an axe and a shuffle.  Just like on the real car, while Kyosho did a great job with the winch and the large D-Rings at the front, even the four headlights look really good. 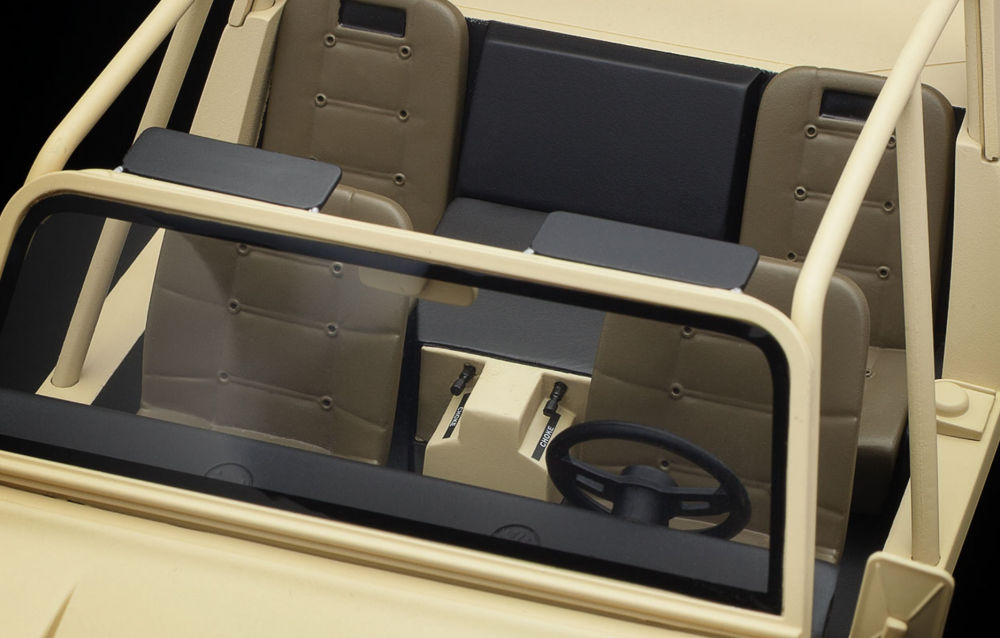 On the inside we find the four individual seats separated by a rather imposing central console, with a ‘choke’ written on the tunnel between the front seats, at the rear there is the black cover over the engine, they even fitted sun visors (they are fixed in position mind you) and what really impressed me is the dashboard. Sure it’s a simple black part, but take a look at the dials, you can read how many miles the car has done, these decals are so sharp.  Very nicely done.

Between the seats you have the large gear lever for the 3-Speed Chrysler gearbox, that’s why you find only two pedals under the steering wheel, but Kyosho also included a bright red fire extinguisher on the floor, and if you look closely you’ll notice a few air vents on the top of the dashboard and the large rearview mirrors can be tilted.  Now that’s attention to detail. 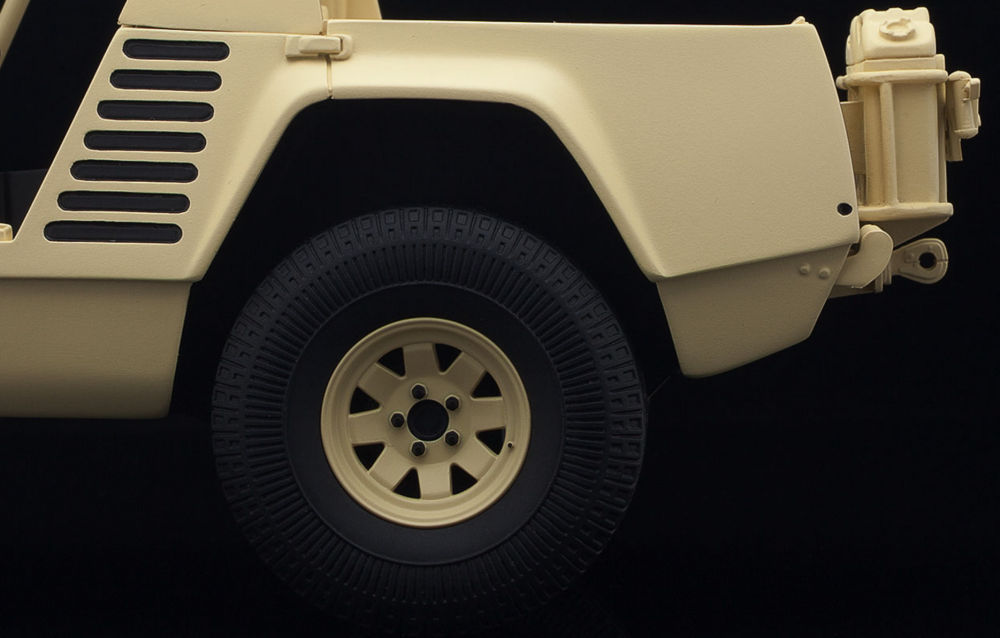 I already mentioned the tires being a very nice replication of the real deal, but take a closer look at those wheels, perhaps not the most intricate design to make in 1:18 scale, but Kyosho did add the little air valve on them, a nice touch.  Being a sealed resin model the front wheels don’t steer and there is no suspension travel on this model, but I don’t care, the shelf presence is great next to my Kyosho made LM002 model.

So is this one of those must-have 1:18 scale models? For me it surely is, the 1977 Cheetah is an important part of history for Lamborghini, after this, they would continue to develop an off-road vehicle.  First the LM001 with a rear-mounted diesel engine, bad idea, but then they came up with the LMA002 in which they finally put the engine in the front, and that would lead to the V12 powered LM002 production version, so yes, the Cheetah deserves a spot in my Lamborghini collection. 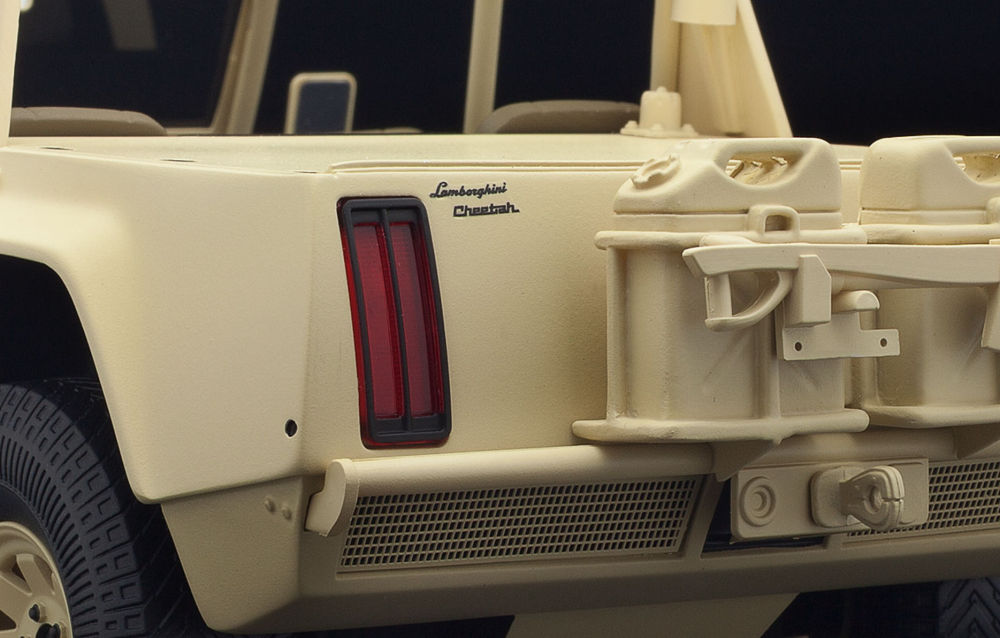 But is this sealed Kyosho version the one to get then?  Yes, easily the one to get as no other manufacturer has this model in their collection, so you only have this option or the darker version from GT Spirit, and for me personally the detail and finish on this model is surely good enough to warrant the price I’ve paid for it. 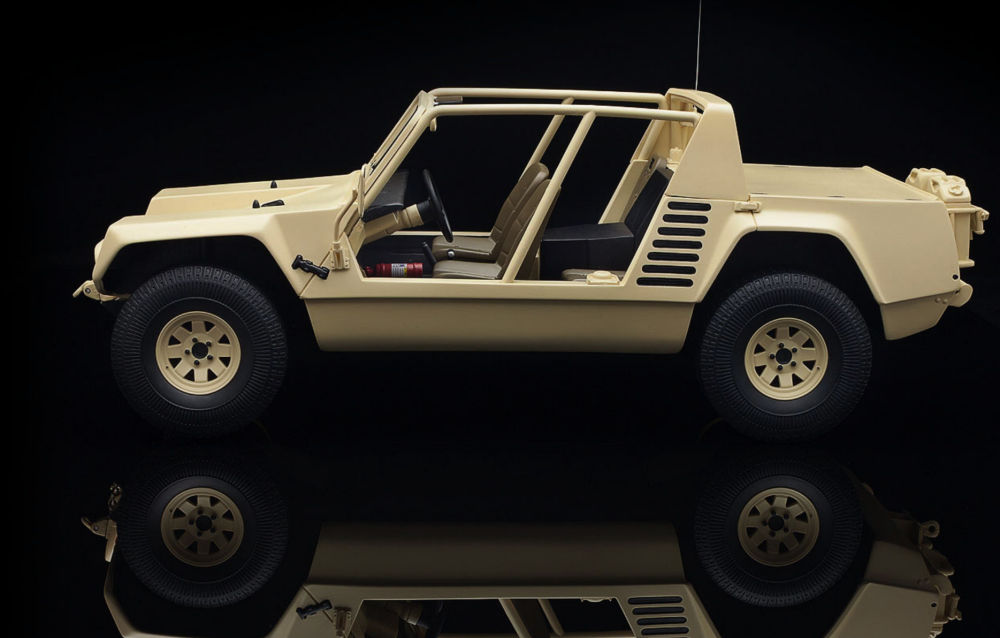 Mind you the real car comes with a very tall antenna, and I was wondering how they would get away with this on the scale model, as it has to fit inside a reasonable box.  They ship these models with a separate antenna you have to fit yourself.  Not the easiest job, but it can be done, so I love this little detail.

If the heritage of the Lamborghini LM002 and Urus interest you, then you really should consider adding this 1:18 Lamborghini Cheetah to your collection.