After VW had snatched the Crewe Factory, the rights to the iconic radiator shell, “Spirit of Ecstasy” mascot and the shape of the Arnage/Silver Seraph vehicles in a last minute bid from BMW, Rolls Royce started its new life with BMW with nothing but its name, which VW had forgotten to buy. Neither VW nor BMW could build any Rolls Royce motor cars in this stalemate. After this had been resolved and BMW was allowed to use the indispensable icons like the radiator shell and mascot, it had to design an all-new car, reactivated the Phantom name which had not been used for a decade and shaped it in a stylistically modern interpretation of the old Phantoms’ design cues. 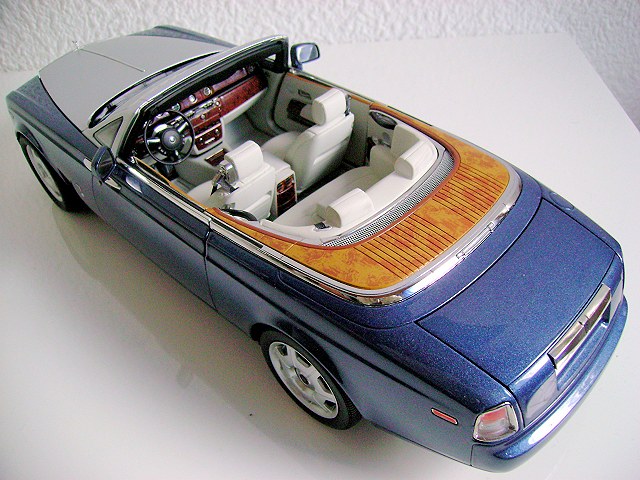 The Rolls Royce Phantom limousine certainly is a good choice for making a chauffeur-driven impressive arrival on more formal occasions. But Phantoms have never been drivers´ cars throughout their history. In more casual settings like a sunny, palm-tree-lined sea-side promenade or marina, you’d want an owner-driven luxury-convertible, in other words: a successor to the Corniche and something to take on the competition’s Bentley Azure (2006). So in 2007 Rolls Royce came up with the Phantom Drophead Coupé, as the name tells derived from the Phantom, not from a Baby-Rolls like the Corniches (which where begotten of the Silver Shadow and Silver Seraph; the smaller Ghost only was launched AFTER the Drophead to boost sales), and all the design-cues, including the trap-doors, carried over to the two-door. 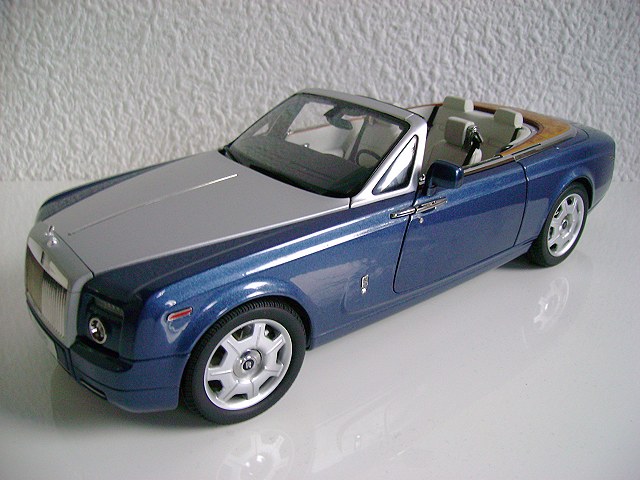 The Phantom’s bulky shape does not necessarily remind of the sleek lines of a yacht, and yet the Drophead manages to evoke this luxury-yacht-summer-feeling by the lavish use of wood on the rear deck that hides the 5-layer-cloth-roof. Thus reviews have favorably compared it to a Riva boat. 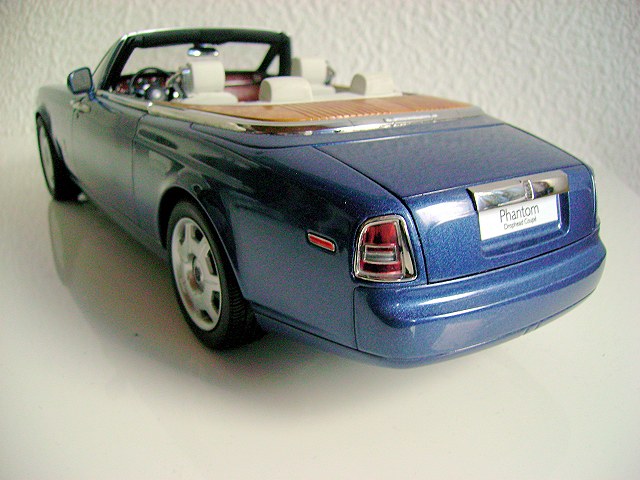 Kyosho captures the lines and the stance of the Drophead Coupé extremely well and both the paint and the shutlines are almost perfect. The shutlines on the bonnet and the boot are so tight that you cannot open them without the buttons underneath the model because there is simply not enough of a gap for the opening-tool that comes with the model. You may even suspect that the petrol-lid is opening, but Kyosho did not risk that. On my model there only is a slight imperfection where the bonnet meets the radiator shell. The metallic effect on the blue paint is brilliantly captured through minute metallic flakes. When compared to the paint sample in the original brochure, you notice that the Metropolitan Blue is a shade darker on the model. Again, there are very few imperfect spots: There is a black grain on the bonnet´s front, a minute chip in the blue paint on the left wing where it meets the bonnet, a white notch on the front skirt’s right corner where not enough paint was applied. 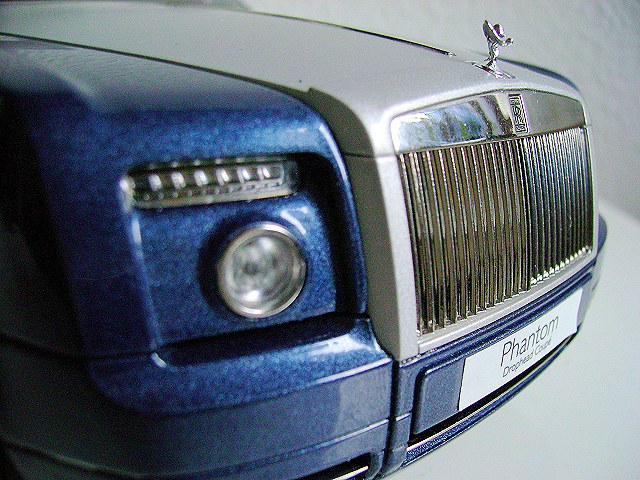 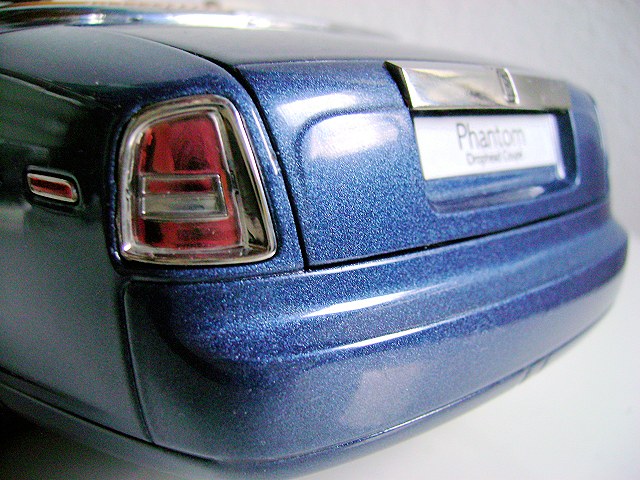 The headlights – no more than narrow LED slits– and fog lights are reproduced well, the rear lights are merely painted silver flat plastic underneath the clear lenses and were better on the limousine where the plastic was structured. This looks a bit cheap and flat. 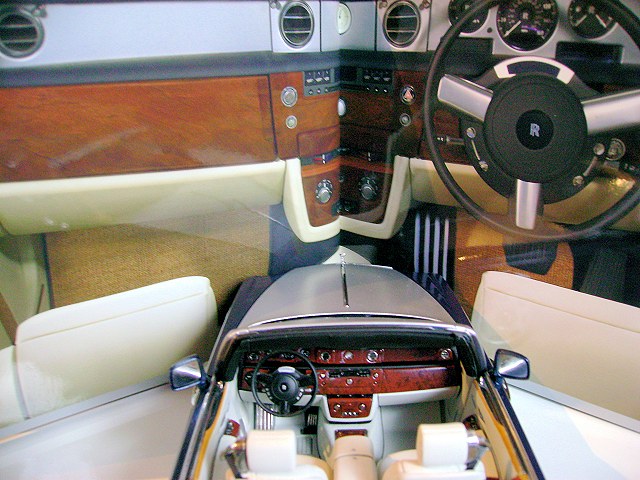 The wood veneer in the interior are like on Kyosho’s Phantom limousine or slightly better, but sadly not as good as on Paragon´s Rolls Royces, Minichamps´ Bentleys or Kyosho´s Ghost which was outstanding in this respect. The decisive wooden parcel shelf looks okay as long as you don´t go to near; close up it looks quite plasticky with a printed on pattern that doesn´t even come close to the originals much finer grain. Unfortunately, my model has visible scratches on the chrome around this rear deck. That is a real pity, as Kyosho has invested into a photo-etched perforated air-outlet between this wooden shelf and the rear seats. The wood veneer at the top of the front doors is finest reproduction of wood on the model. 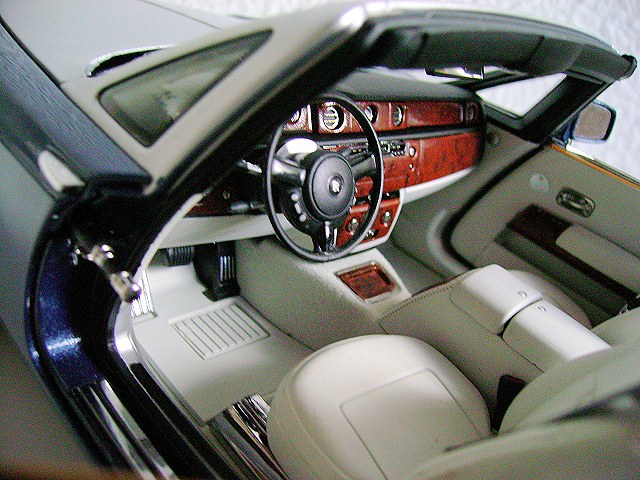 The cabin has a carpeted floor and a nice reproduction of floor mats in the front and rear. The pedals and footrest for the driver are extremely nice. Of course all four seats have cloth seat belts with photo-etched buckles. The buttons, gauges, air vents and the analogue clock that hides the Satnav screen are reproduced nicely throughout the cabin. More buttons and storage room are hidden from view underneath the opening central armrest and the rear armrest folds. And of course, miniature umbrellas can be removed from holes in the front wings, when the trapdoors are open. 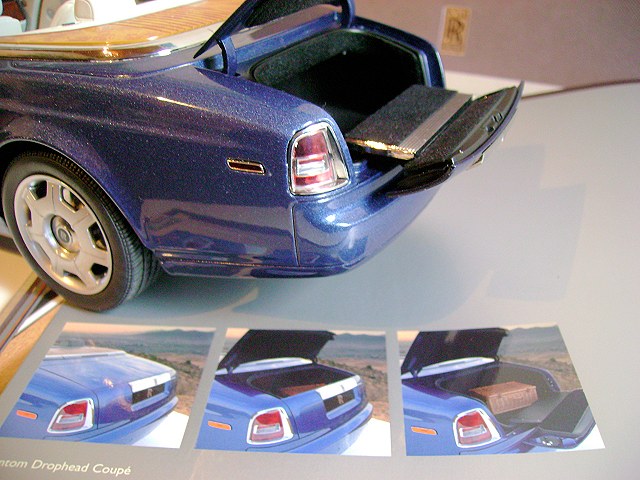 Once you have managed to open the two-part “picnic” boot, you find a carpeted inside with an actually folding table to bridge the gap between the outwards folding nether part of the boot lid and the boot´s edge. However, this part does not open far enough to be level to the ground and offer the intended seat or access to the boot. Additionally, the screws and hinges of the table seem a bit big for the scale. The “RR” emblems on the closed boot, in the front wings and in the radiator shell are perfect, just like the famous mascot. Opening the bonnet is even more difficult because of the two struts which are supposed to stiffly keep the bonnet in its open position offer the same resistance when the bonnet is closed. But the effort is worthwhile, as the Drophead´s engine bay has more to offer than the plastic covers of most modern cars. Well done, Kyosho! 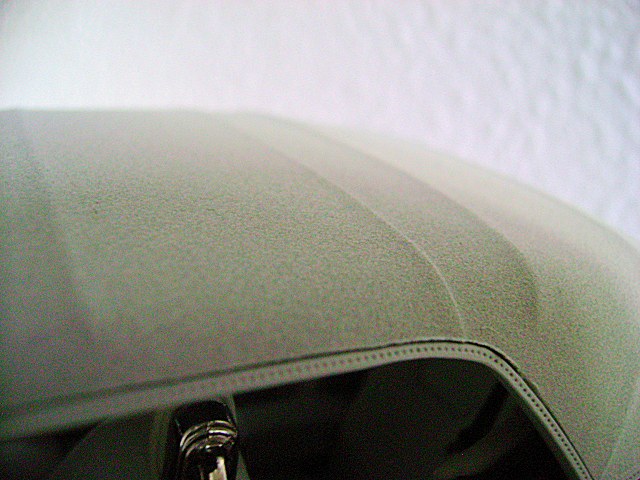 The 21″ alloy with silver finish option has been captured excellently, and even the hardly visible braking discs and calipers have received more attention than you might deem necessary behind those rims. Of course, the “RR” in the wheels remains upright when you man-oeuvre the model on the coffee table.  The roof is not 5-layer-cloth on the model, but two-layer with the outward layer replicating cloth through a thin fine-grain-pattern. No plasticky look or feel there. It does not lock firmly onto the model, though, but is only loosely put on top. Without deformation anywhere it will do the trick. 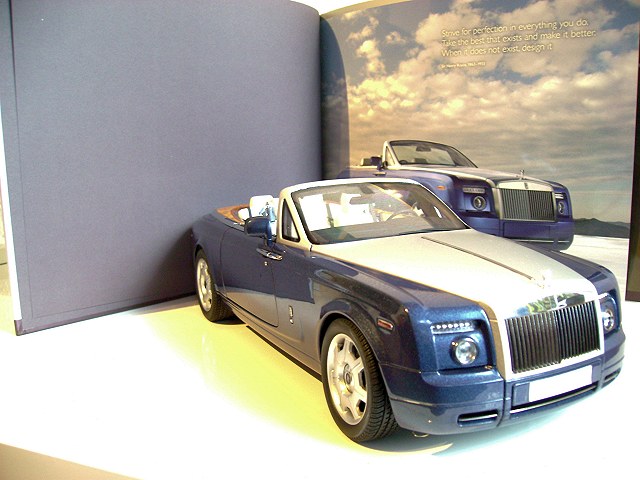 Overall, it´s a nice model, some of whose idiosyncrasies could have been avoided, as Kyosho have previously shown that they can do better and, therefore, ought to mind Sir Henry Royce´s motto a bit more: “Strive for perfection in everything you do”. 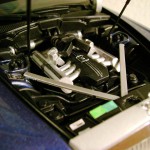 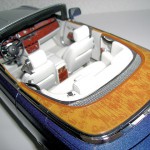 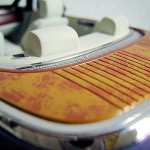 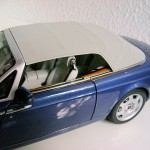 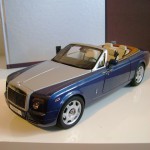 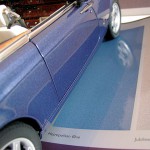 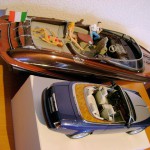