Words and photos courtesy of Stephane

There has been some talk recently about a model from the new manufacturer LCD Models. The model in question is the Pagani Huayra Roadster in 1:18. I heard lots of praise about this one and some criticisms. Since I had the opportunity to get it for a fair price I decided to go ahead and order one. The Huayra Roadster is sold at 980 RMB or about $145 USD in China. The seller was asking for $180 USD shipped by DHL. Once delivered in Canada it set me back the equivalent of $200 USD including duties. So let me give you my honest opinion about this model and what you get for that price. 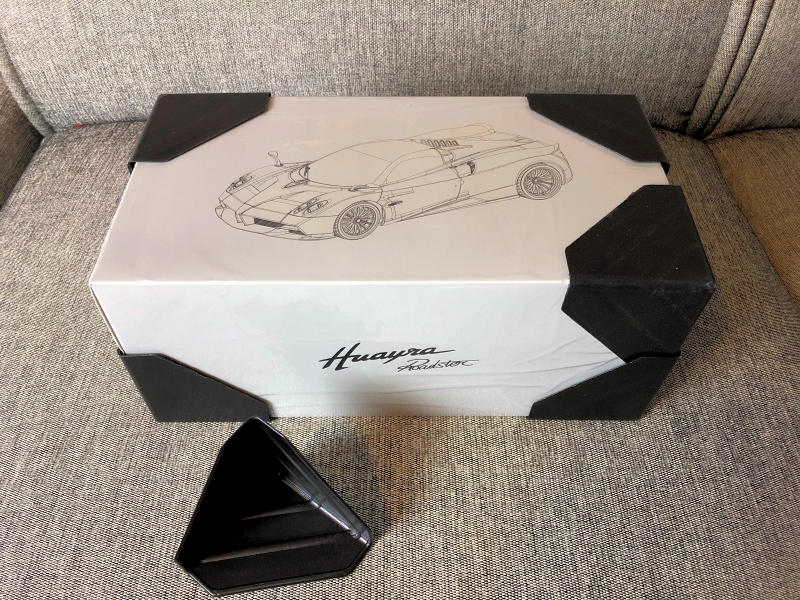 The box arrived minimally packaged (apparently re-packed by DHL) in a tight-fitting carton with slim bubble wrap and plastic protections at all corners. The corners did the job well to protect the model box. 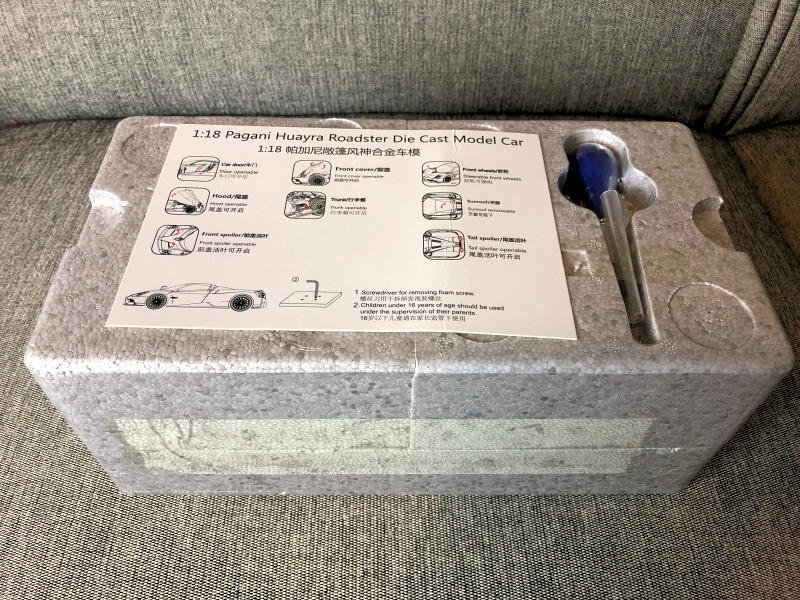 Along with the classic styrofoam clamshell a screwdriver matching the colour of the model is provided. Nice touch but in fact, the screws holding the car to the clamshell are so tiny that it’s almost like a special tool is needed. It wasn’t the easiest model to unscrew but all went well. At first, glance when opening everything looked fine but upon unwrapping a plastic part fell off; a small carbon fibre cover with the Pagani badge. The transport must have been a bit rough. The part was quickly glued back after so no big deal. 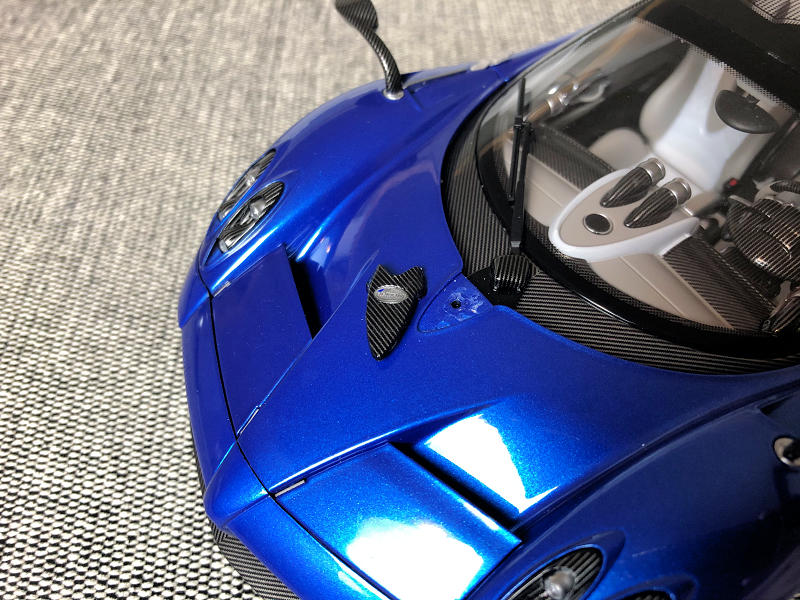 So how is the model and does it meet the expectations? The model at first makes a great general impression. I used my phone to take pictures but the pictures don’t lie. The model looks good, everything can be opened, it is heavy and has a full working suspension. The paint application seems smooth and uniform. There are a lot of very nice details like glossy carbon fibre parts, opening aero flaps and luggage compartment, realistic metal parts and a bi-colour interior true to the aesthetics dear to Horacio Pagani. But as always the devil is in the details in this case the execution of the model.

The model is available in metallic red, purple, blue and is coming soon in white. I went with the blue car as the specs are very close to the car presented at the Geneva motor show in 2017. To the exception that it was presented with a blue carbon fibre body and the LCD has just metallic blue paint. The wheels specs, silver on the left (with white tire marking) and gold on the right side (with blue tire marking) match the presentation car. The beige and white interior is also exact. 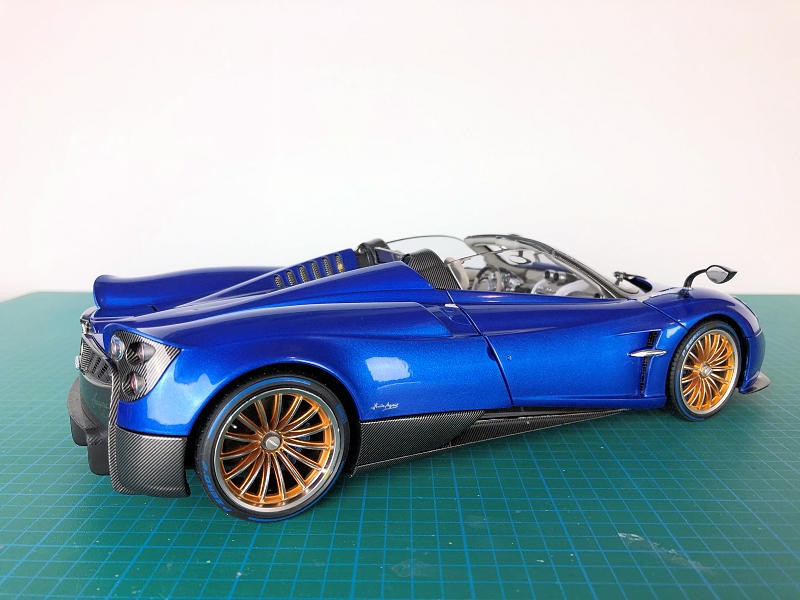 The wheels on the model are well done and have a real metal feel. The stance however isn’t perfect as the car sits a bit too high in my opinion. 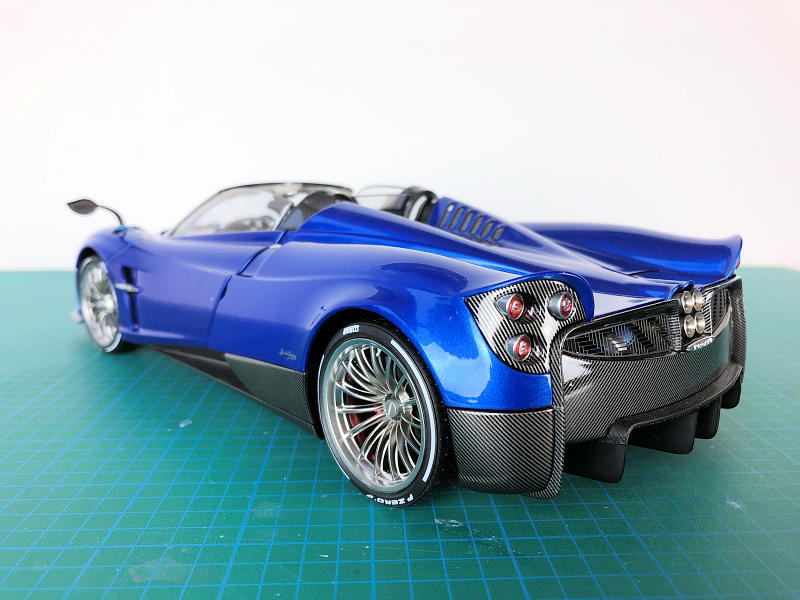 On the exterior, the carbon fibre parts are mostly done with clear coated decals. On my model, I can confirm the application is well done as I carefully inspected it all around with my binocular magnifier. The scale of the carbon weave is questionable though, maybe slightly too large. Also, the orientation of the weave isn’t always true to the 1:1 car. 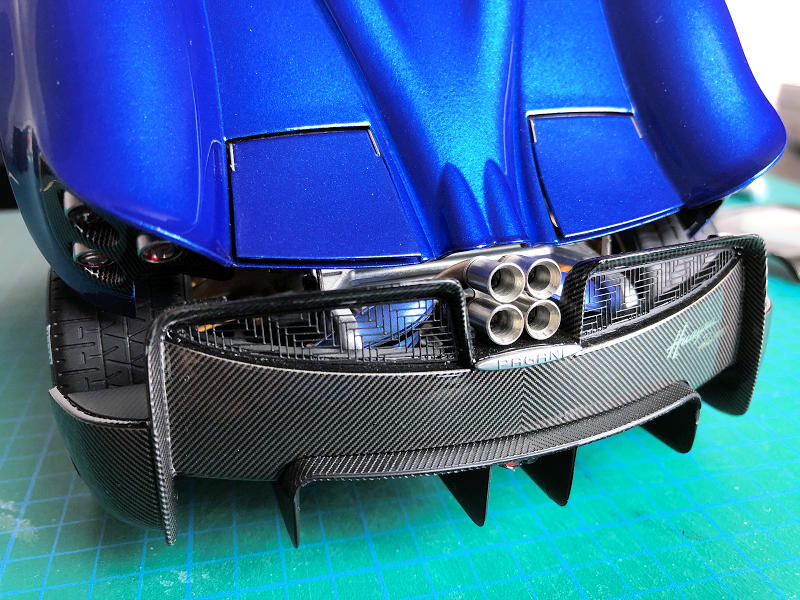 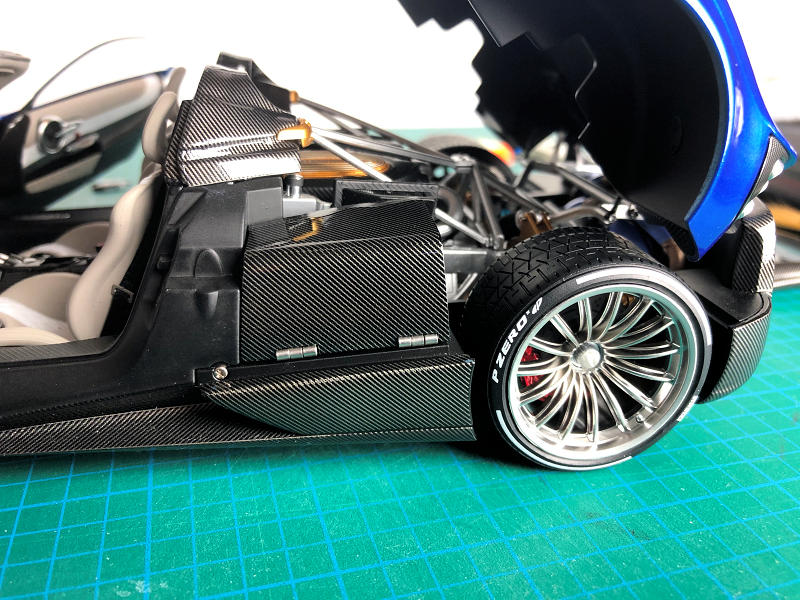 Clear coated carbon decals can also be found in the interior and engine compartment. However, some carbon surfaces have been simulated with moulded plastic of poor quality compared to what other model manufacturers have achieved. In some areas, there is even no carbon at all like on the outside of door sills. Obviously, the manufacturer cut corners where the carbon is not so visible. Not great.  Some exterior details are really good, others are a bit clumsy, as the typical Pagani mirrors with stems slightly too thick. 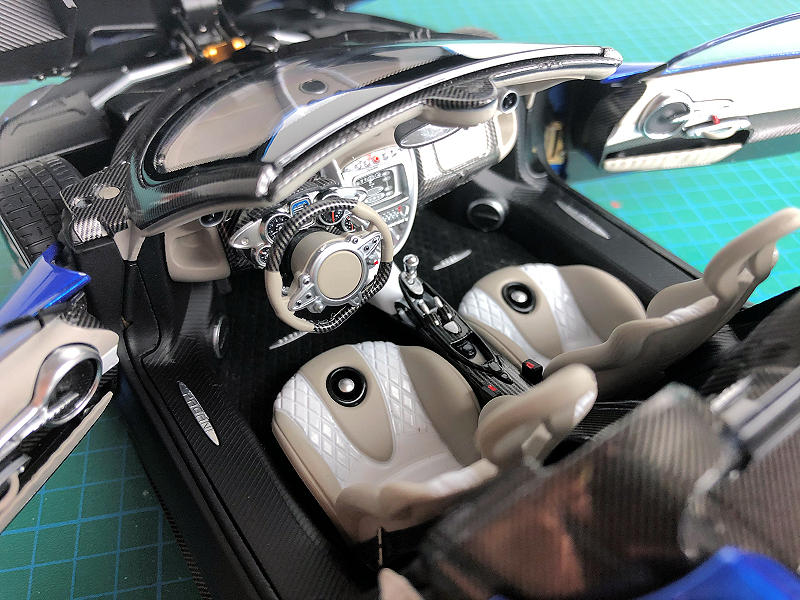 Moving to the interior a lot of details can be seen like carbon fibre parts, metal parts and small luggage behind the seats. But the interior feels plastic as the various textures are missing. For example, the paint used for the white quilted bands on seats is semi-gloss which doesn’t look right.

The engine execution appears acceptable but again the various parts feel plastic with several apparent mould lines and plastic moulded carbon. It certainly does not compare well with the original Huyara from AUTOart. Since I don’t own the composite AUTOart Huayra BC I cannot really compare but according to the pictures I have seen they look kind of similar. 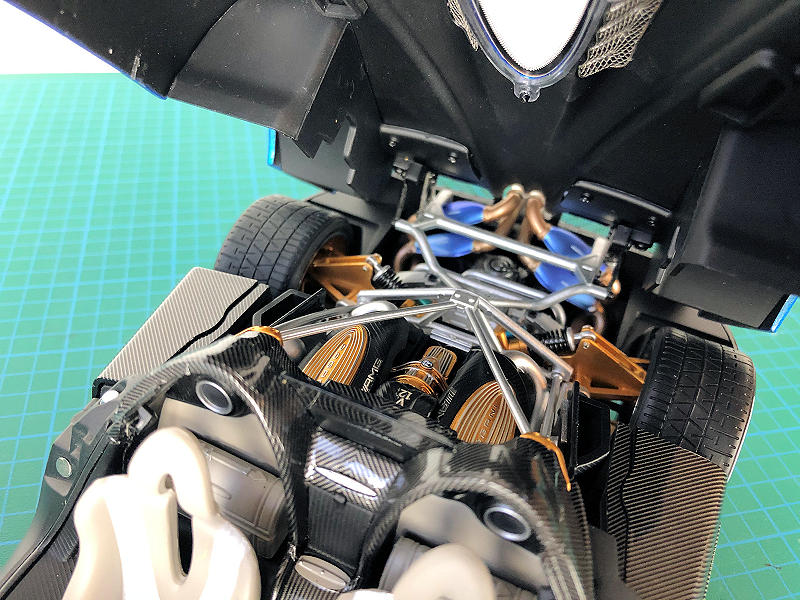 At this point let’s talk a bit about fit and finish. The front clamshell and doors fit isn’t great and is causing panel gaps larger than they should be at the front of the door. The hinge mechanism of the front clamshell seems well-engineered though, made of metal parts and small struts. So the issue is apparently somewhere else.

The doors fit when closed isn’t perfect either. The driver door is a bit tight and the passenger door too loose. All opening parts are equipped with small magnets to secure them but several just don’t work. Like the passenger door that won’t lock. I have seen these issues on other high-end models but this is definitely a let down on this model. After studying the front end hinge I realized there is a better way to close it by pushing the front down first (towards the hinge) then close it. The same as with the AUTOart Aventador front trunk for example. That’s helping but not solving completely the gap issues. 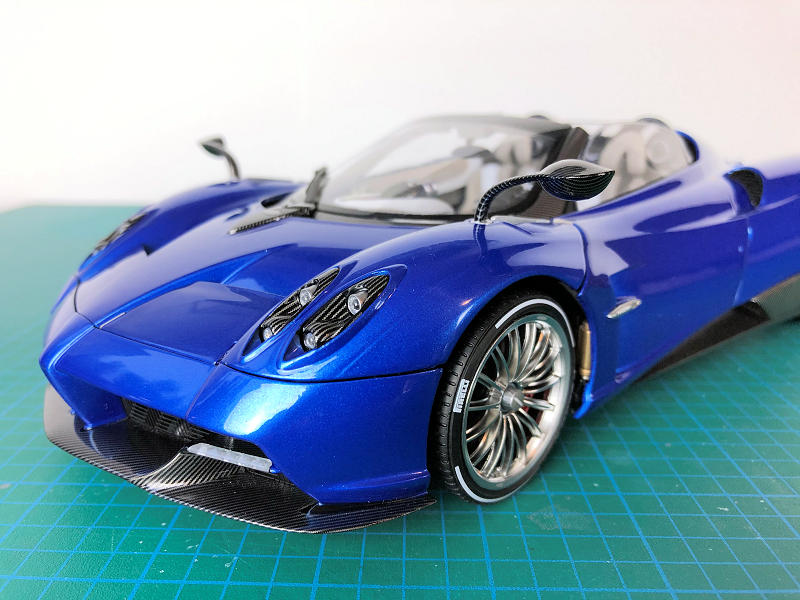 Possibly as a consequence of the fit issues my model had paint chipped off a few panel edges. Nothing too difficult to touch-up when you have the skills but this is another let down for sure.

The openings are razor sharp at some places and there is a sequence to respect in order to open them. To be fair I remember I had to touch-up my diecast AUTOart Huayra when I received it. But the LCD Model is definitely worse in the department of fit and finish. 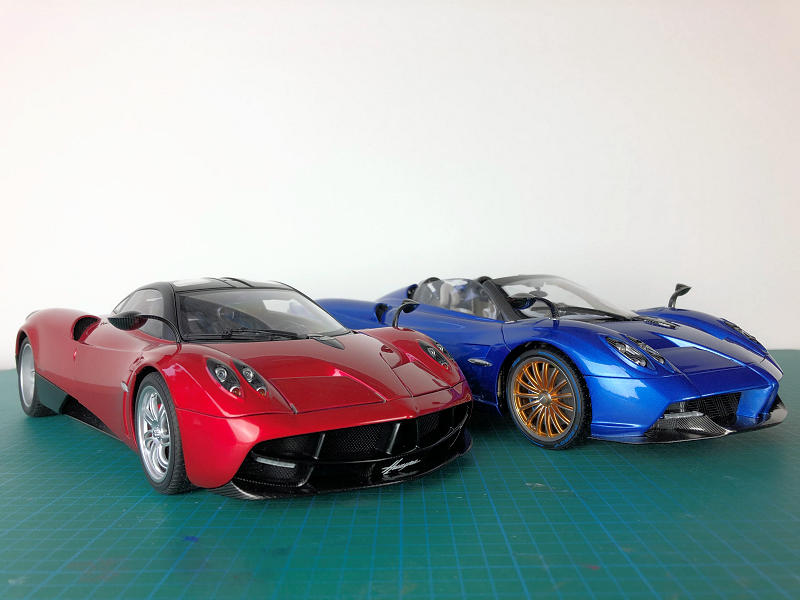 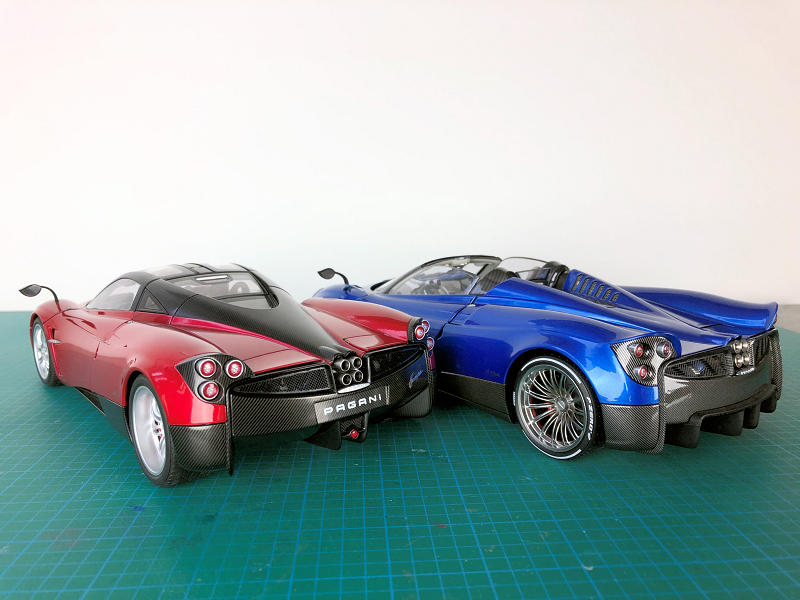 In conclusion, the model has many positives and a few things that bother me. Considering what I paid, it is not a bad deal. But I wouldn’t pay the 235 Euro now asked by some European shops.  I feel LCD Model has done a lot to impress but not enough to produce a perfectly polished model. A little more effort in making sure the fit and finish of opening parts are perfect, improving a few details and adding interior textures would have gone a long way. Since this is still a new manufacturer I am just hoping this one is part of their learning curve. I think I will keep the model but I am very curious to see how it will compare to the composite AUTOart Huayra Roadster when released.