The next example falls under the cheap and cheerful title.  Some may even extend the crown of budget-friendly label.   The brand and vehicle you should be familiar with, as Maisto has been serving the hobby for a number of years with mass-produced replicas in various themes and scales.  For the most part, their selection is limited and innovation is little, only a few new models from a ground-up perspective are released each year.  2021 brought forward one example in 1:18 scale that tickled our fancy just enough to purchase one, it is their version of 2021 Ford Bronco Wildtrak in 1:18 scale.  They also have the new 2021 Ford Bronco Badlands in the assortment now as well – a cool replica with no doors!  Pricing on average for 1:18 scale model is about $40 CND.  Cheaper than competitor Solido who don’t offer many, if any examples featuring full 360 access, which the Maisto Ford Bronco Wildtrak does.  But is it better? 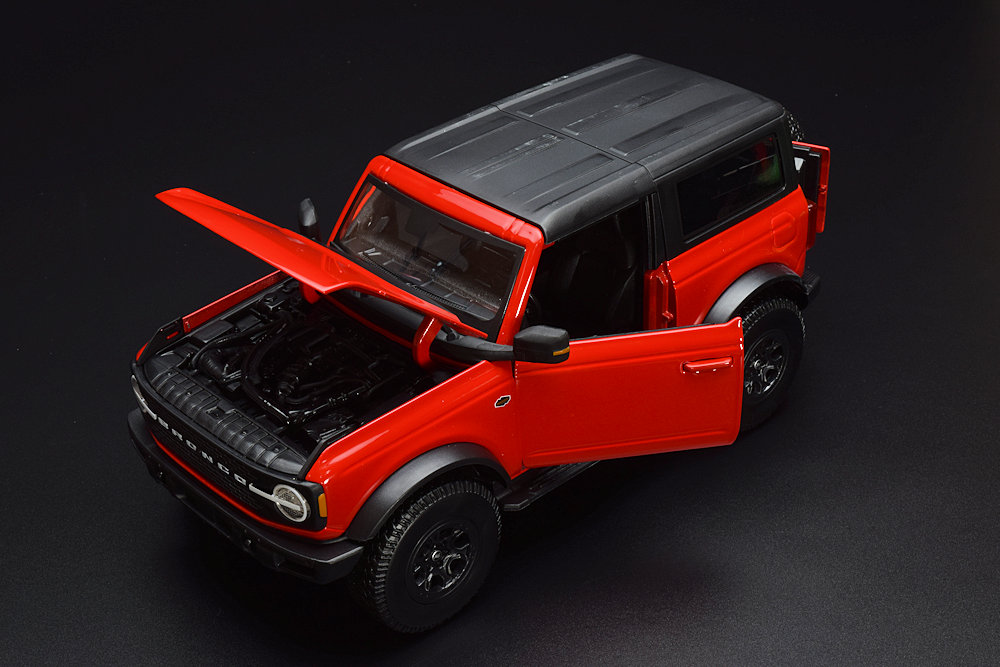 The 2021 Ford Bronco is definitely the winner of SUV of the year in our opinion.  It checks almost all boxes with the exception of fuel economy and seriously, is someone concerned with fuel economy when purchasing one, not likely!  Keeping true to the original the latest incarnation is just stunning.  And with the many variants and plethora of options, we’re hard-pressed there is a better alternative out there. 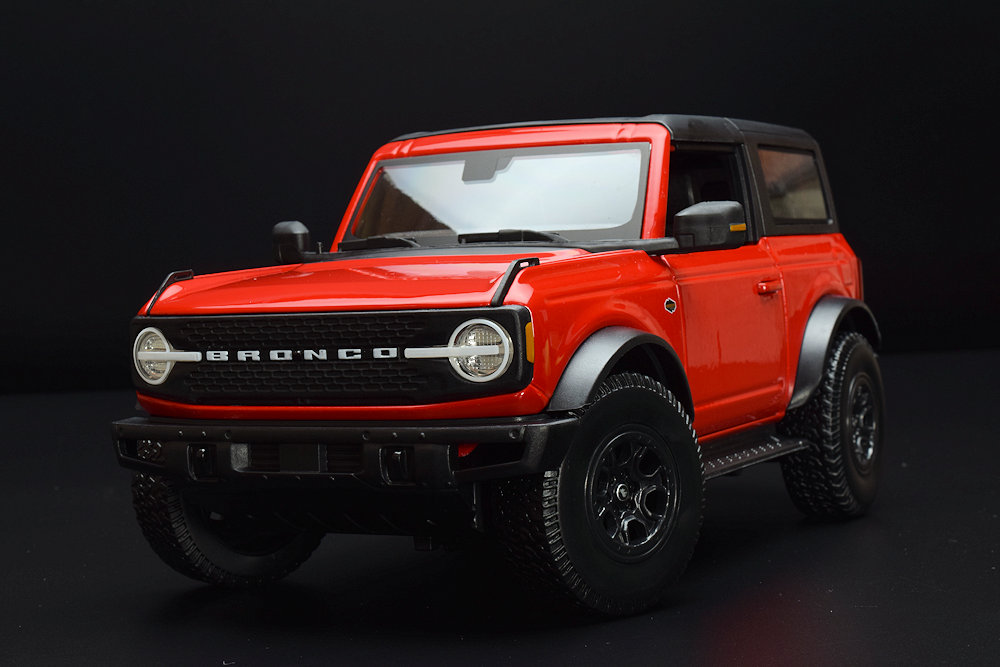 Maisto’s example is found in Rapid Red.  Not sure if it mirrors the OEM colour accurately but paint application is more than decent and consistent on our example.  The rest of the exterior is crafted in Black mould-type plastic, this includes the upper roof and lower moulding and bumpers.

As for accuracy, Maisto has a history of producing replicas too large or at times too small…  For a mass production brand, this is what you get, and we’re not pulling out our rulers to justify the accuracy for a $40 example.  What we will elaborate on based on case study photos is that the model seems to be up to speed in terms of the overall look.  Though one needs to be prepared that the “finer” details won’t be there or overlooked entirely for cost-saving measures.  But we would think you would already know that in advance of purchase or at least learn it here if you fully read this review. 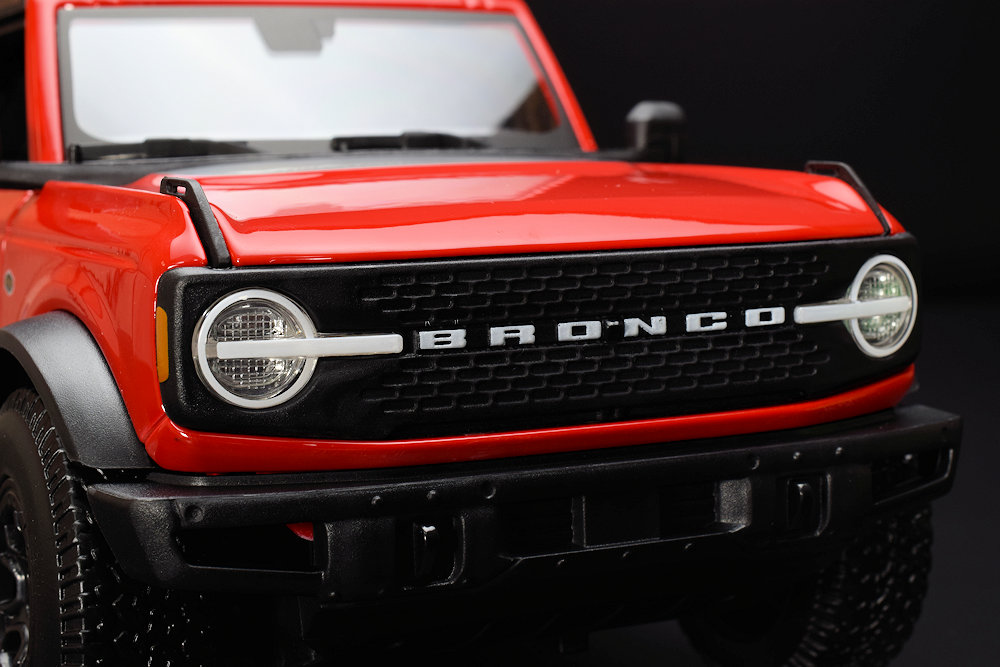 The front of the Ford Bronco is an earmark to its history, and the modern version does well to preserve its history with a few convenient enhancements.  Maisto’s translation is somewhat primitive, the front grille is a solid plastic piece.  Though seeing it in person does present the original in good form.  The definition of headlights and led indicators are good, with halos defined too.  Bronco lettering is centre are clearly marked as well. 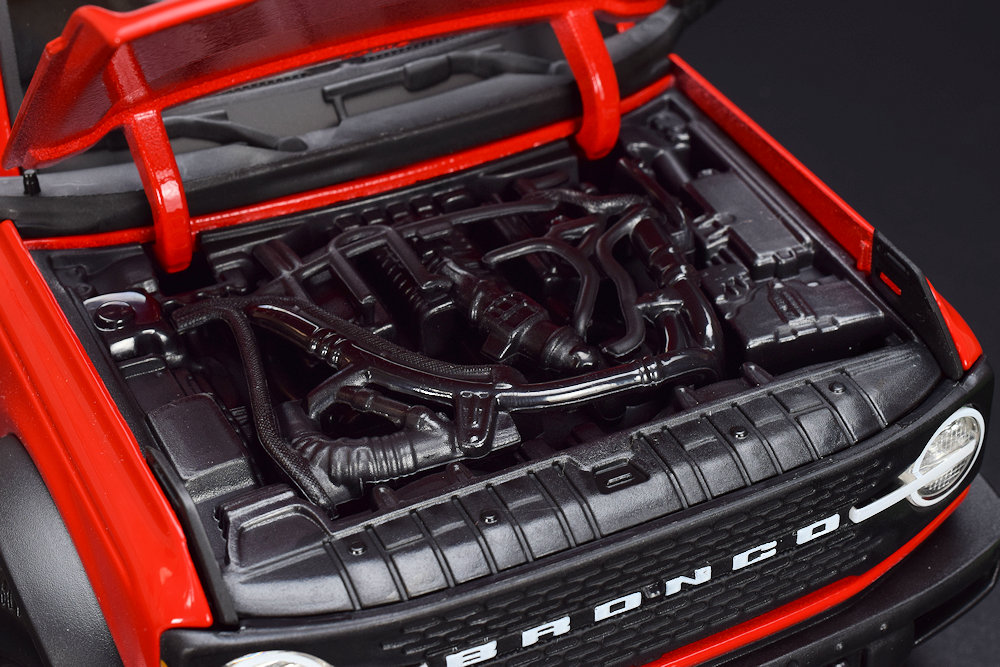 As we mentioned, this example provides full access to much of the internal bits.  The first is the motor, as you can see from the image basic dog-leg hinges and a very basic representation of the motor is executed in all Black, single structure plastic.  Notable mentions include the Black/Matt area on top of the hood presents the “Wildtrak” logo (see below images).  It was difficult to see at first, based on your viewing angle.  Also, both front tie-down bars/structures do provide a window and are not solid.  So if you wanted to tie a piece of wire or string to mimic the windshield saving method (deflect large branches) you could. 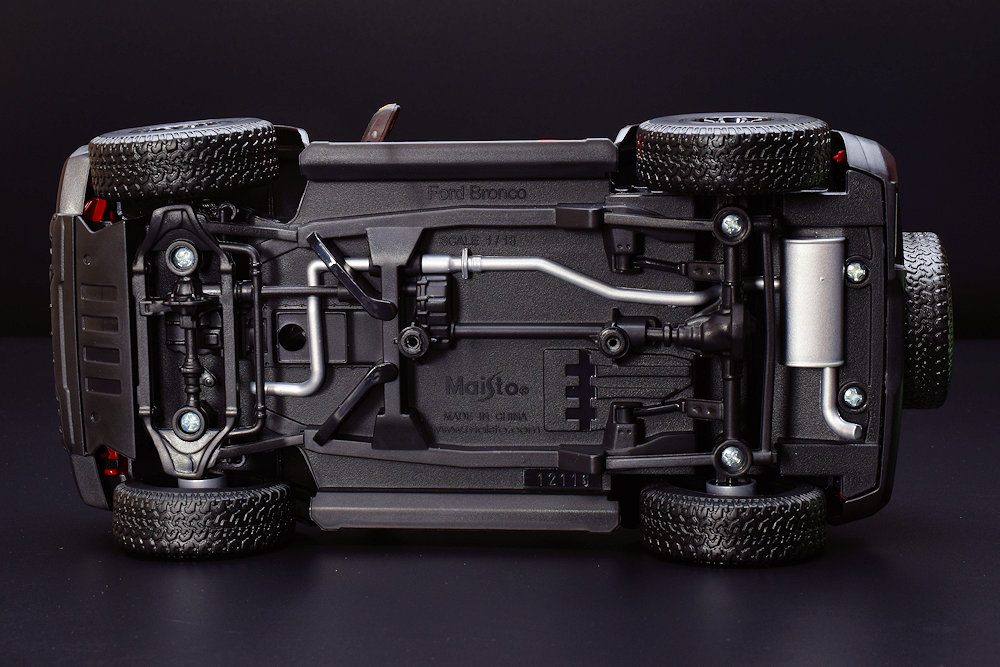 Surprisingly enough, the underside of the model does provide a significant amount of detail for a budget model.  We’ll let the photos do the talking here. 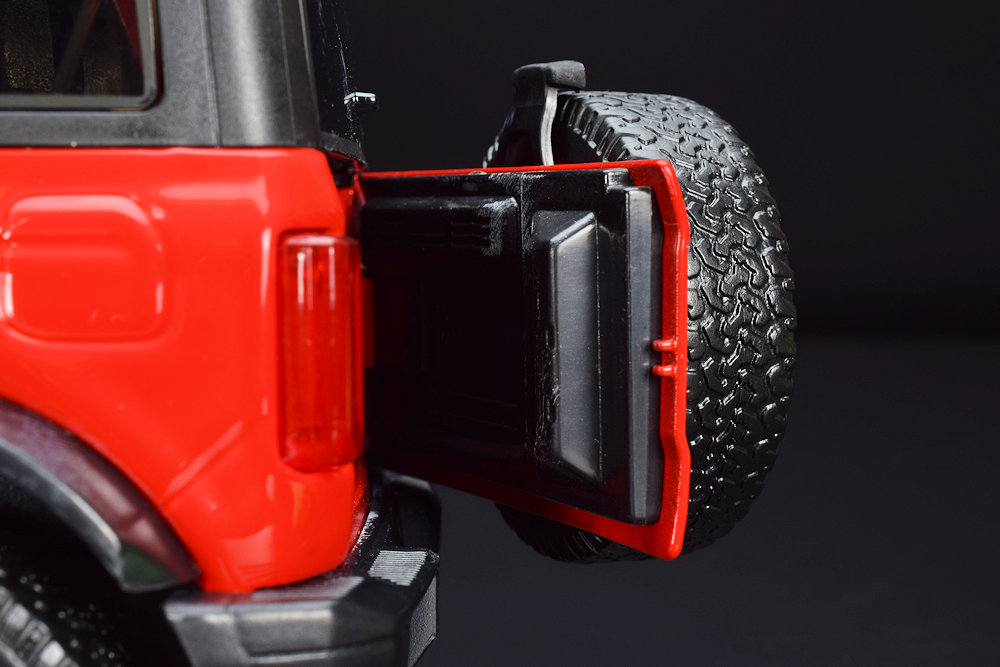 The rear is much the same.  Bronco and Ford decals are presented and they also include a fifth tire as we all know as the spare.  Believe it not, Maisto also provides access to the rear, though the opening only extends a short distance from the close position.  Still thumbs up on the effort! 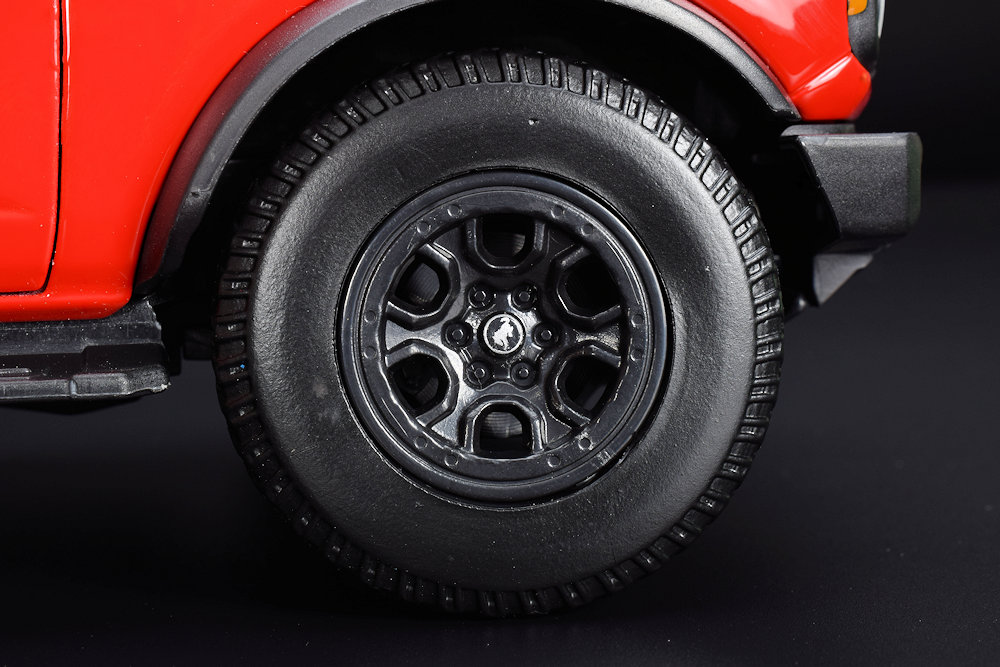 Before we head into the interior, let’s look at the wheels.  This Wildtrak is sporting the Sasquatch Package, in short, bigger wheels and wider fenders encompass the changes with the workmanship here is more than respectable.  Obviously, there is a lot more to the package but what is presented here in scale is found in its basic form.  The results aren’t too shabby at all.  The trademark spring-loaded suspension from Maisto works in reinforcing the SUV feel.  You can literally bounce the model like a basketball if you choose LOL. 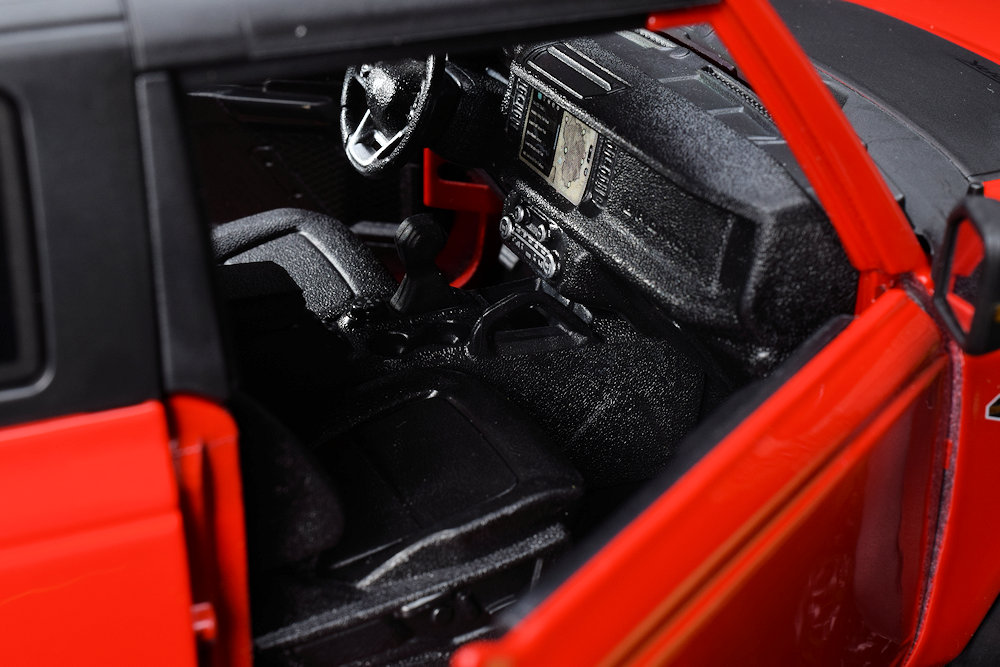 The interior of the Ford Bronco is what you would expect if you have any history with the brand.  It’s crafted in all Black plastic.  It looks so generic that other than the steering wheel (it does turn the front wheels for those that may be interested) it does look like one solid piece.  Other than a few stickers for the dash and infotainment system it is lacking any true depth or detail.  Door cards do provide some detailing, again very limited.  And the basics like flocking or seatbelts don’t exist at this price point either.

This budget-friendly model of the 2021 Ford Bronco Wildtrak is just that, budget.  For about $40 CND one can enjoy an adequate model with full access.  If expectations for you are short of the best in refinement, which for that matter none currently exist for sale (GT Spirit to exercise a static and resin version soon), the Maisto Ford Bronco Wildtrak does deliver in spades! We’re presently surprised at how much we like it.  Likely has more to do with how much we admire the 1:1.

As for the comparison to Solido, which does cost more, we find the interiors better with Solido, and possibly the exterior refinement in some cases.  But if we’re honest, the level of execution isn’t also aligned equally across all models with Solido, though recent efforts are definitely showing improvement.  In short, each has its strengths and weaknesses, however,  on value alone, Maisto wins.  Enjoy the pics!