Words and photos courtesy of Zondaracer

The new Ford GT must be the hottest car of 2017. 6500 people wanted one, only 500 customers are selected for the purchase. It has a passenger compartment with separate side pods in Le Mans style as has appeared on the James Glickenhaus’ SCG003. I bought one of the first Maisto Exclusive Ford GT’s that arrived in Europe, being a dark red one. Given the choice I would have chosen a blue one, since the color is closer to the real car and the stripes really suit the GT.

The box and foam packaging of the Exclusive model is similar to the Signature line of Bburago. There is a color tab on the box showing the color of the model. It’s thin cardboard, but the foam protects the model sufficiently. A piece of soft paper protects the paint from rubbing against the foam. The model is fastened to the foam by 2 screws and a plastic base. Removing the model is easy, there are no further straps. 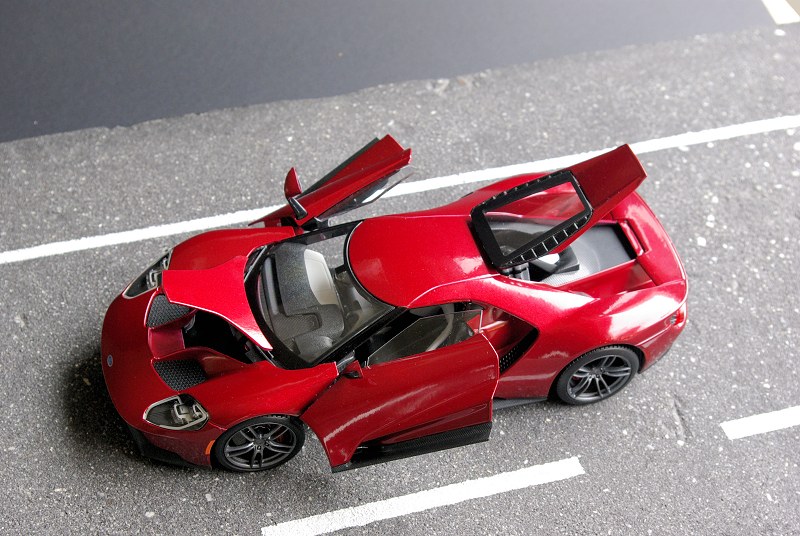 My model is spotless, no obvious QC problems. Paint is shiny and details are gorgeous. Maisto has done a good job mimicking the GT stance and appearance. It’s a low long tail car with lots of gaps and channels to guide the air-stream. This must have caused a few headaches for the model makers, but the result is astonishing. There are air channels in the doors as well. You can spend easily an hour studying the details of all the vents and holes and get an idea how the air flows over the car. The spoiler can not be raised, disappointing because the car has a more aggressive look with the spoiler raised. Panel fit and finish is beautiful, very small shutlines. Most distinctive feature of the Exclusive model are the full side windows, something often desired by diecast collectors. It does enhance the flowing lines of the GT. 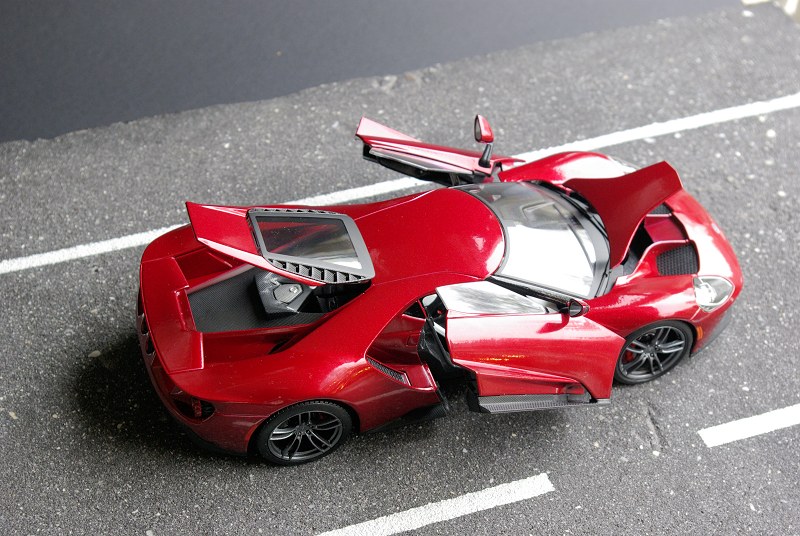 Finish of the cast body is minimal. Mould lines are visible and there is a strange dent in the door shoulder line near the mirrors.

Although shiny, the paint has an orange peel effect. The finish disappoints because it doesn’t come close to the Bburago Signature models (which I assume come from the same factory). Paint is thin at small air intakes and under the spoiler. The aft inner part of the body is a plastic piece. Under certain light conditions there is a color difference between the plastic and diecast parts of the body. 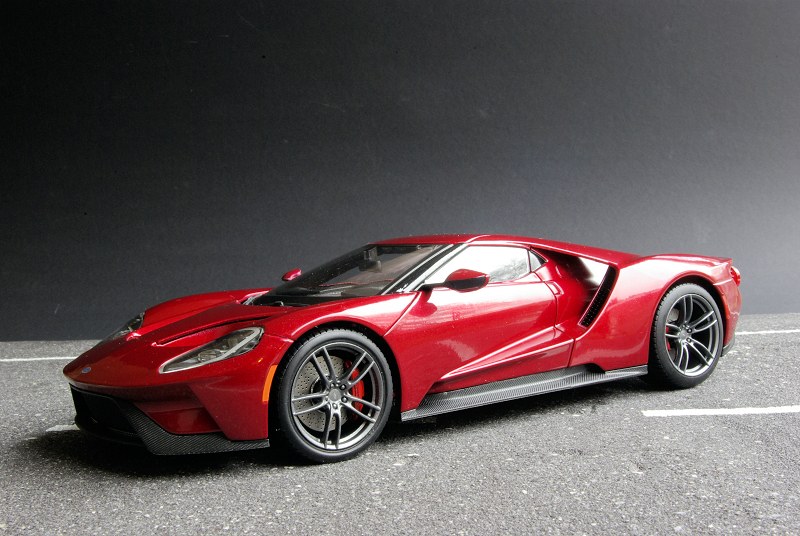 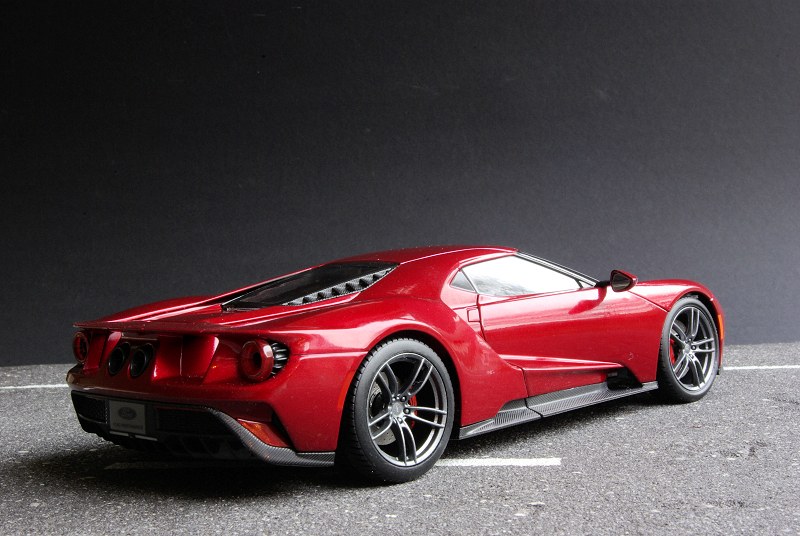 On the Exclusive models the headlights are painted silver and have a small GT logo. They are small jewels as are the hollow taillights. Mirrors have real glass, the rear GT logo is photo-etched but the front emblem is painted. All carbon is shiny dark grey lined plastic. It’s convincing from 2 feet distance, I even prefer it over tampon printing. Grilles are closed and moulded with fine edges. Most grilles are plastic, but the mesh in the side-pods are part of the diecast body. Looks good to me, I only wished Maisto had open mesh in the side pods with visible intercoolers behind it. 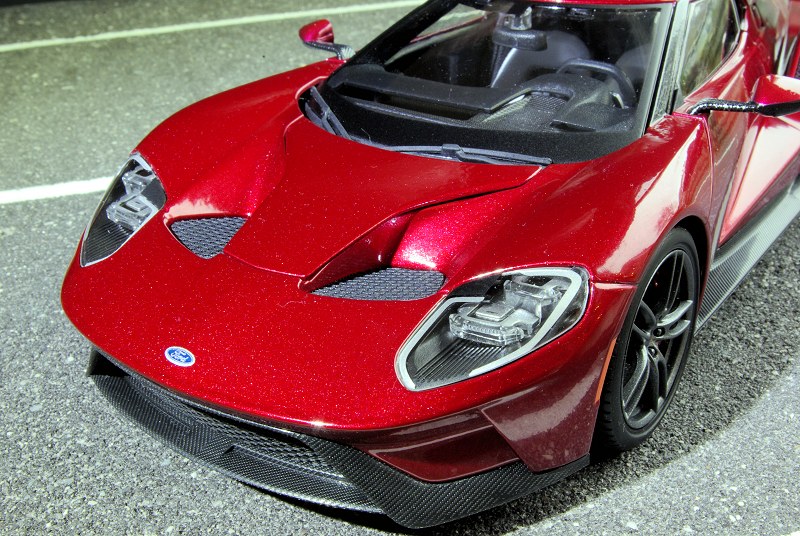 The front of the car opens and reveals a boot. On the real car this area is filled with tech bits as battery, air conditioning, brake servo etc. The real luggage compartment is a small area in the tail of the body but is missing on the model.

The doors need to be snapped loose and open only partially. It feels flimsy, the limited opening looks odd and hampers visibility of the interior. It looks like Maisto forgot to dial in a bit of rotation in the doors movement. They open by a sliding bar through a slot of a clear piece of plastic. 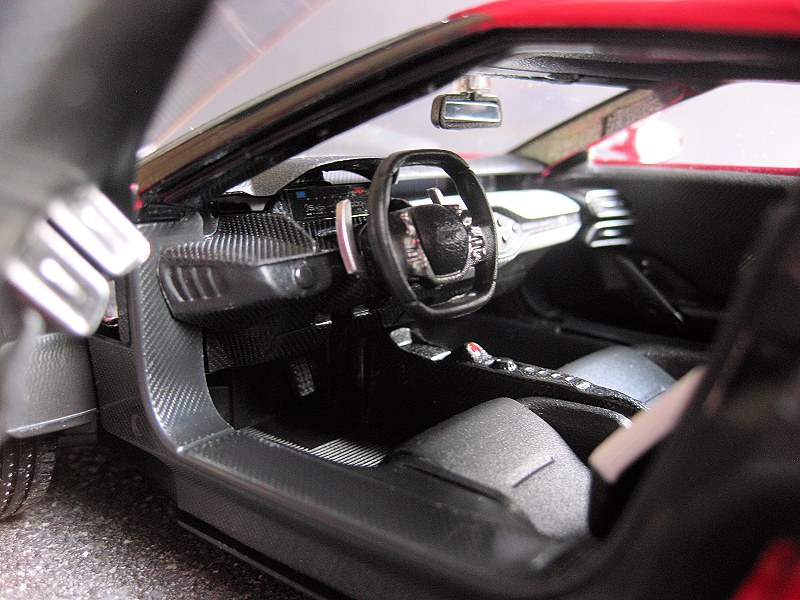 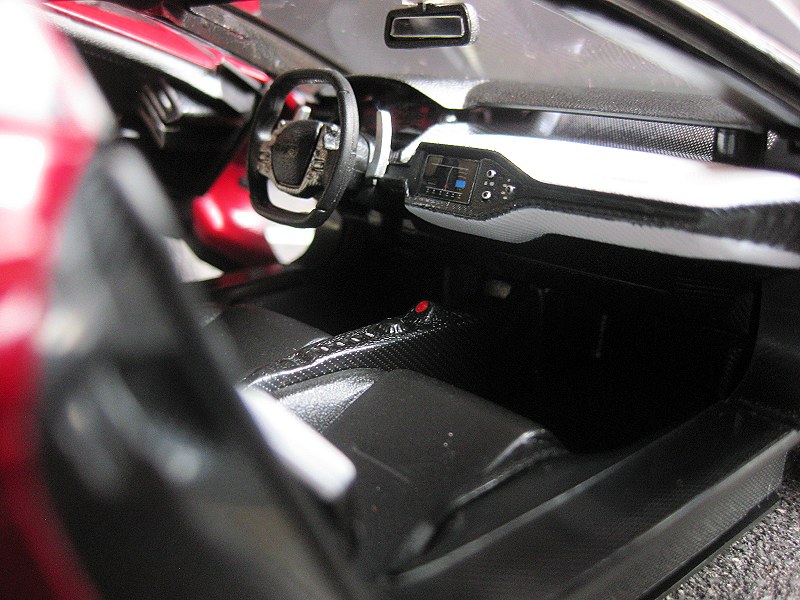 On the Exclusive model the interior has better detailing than the standard version. There are decals for the dash and info screen and switches on the dash and steering wheel are highlighted. Even markings on and around buttons are painted. Impressive! Several interior parts are painted white, mimicking the Re-Entry spec. interior. A nice touch is the “bridge” over the dashboard. The rest the interior is a sad display of dark plastic. The seat frames and dashboard strips should have been painted silver, but have been overlooked. The rear-view mirror is mounted directly to the windscreen, it looks hideous with a large visible stud. 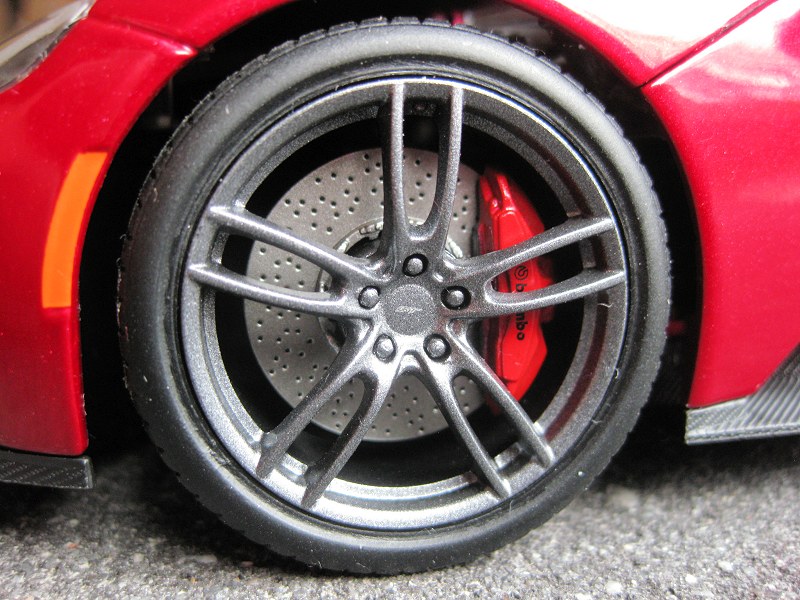 The front and rear suspension have springs making it easy to change the ride height. Present position of body isn’t too bad, but the car just begs to be lowered to race height. The tyres, brakes and wheels are spot on, but as usual the tyres don’t have markings. The calipers have the Brembo logo and the discs are highly detailed. The front discs and calipers are larger than the rear ones as on the real car. The wheels have even barely visible GT logo’s on the hub cap. Nice one Maisto! 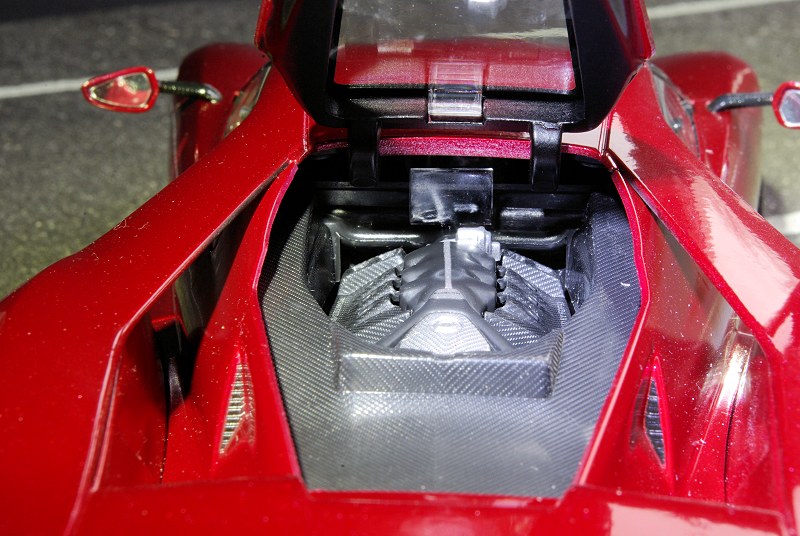 Nothing much to see here, similar to the real car. Just a plastic engine cover and large areas of carbon. Annoying is the small middle section of the rear passenger compartment window. It sits almost on the engine. I thought it was a sort of gun visor left over from a WW1 airplane! Further mistakes are the missing luggage compartment and carbon lines covering the aluminium oil tank. 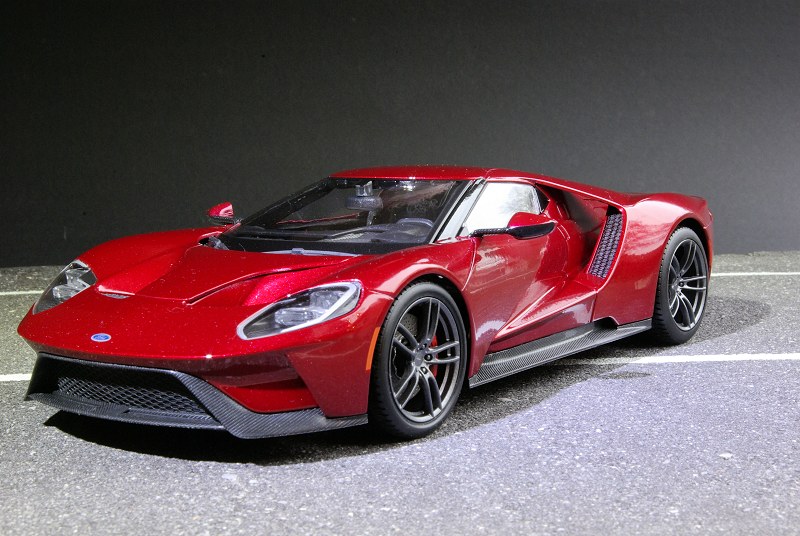 I am pleasantly surprised with a good looking Maisto model in a price range many diecast enthusiasts can afford. Stance and exterior details make the car good enough to display in anyone’s cabinet. It’s also a good base for modders. I expect this model to appear on forums with many new paint schemes.

On the negative side the model lets down in finish of body and paint, a non movable spoiler, doors than don’t fully open and a soulless interior. For an Exclusive model I expected more. This model will be appreciated by enthusiasts but serious collectors probably want to buy an upmarket model. 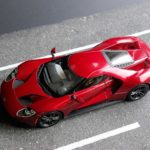 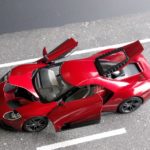 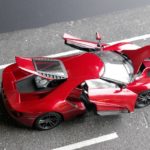 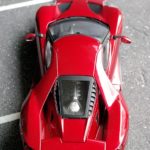 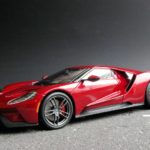 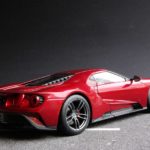 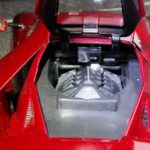 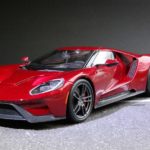 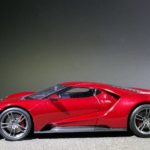 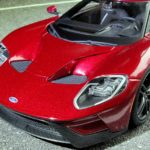 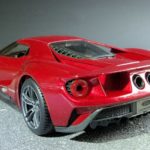 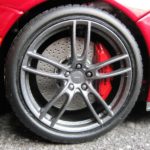 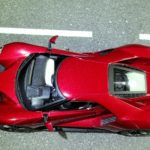 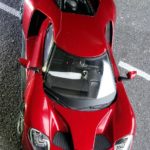 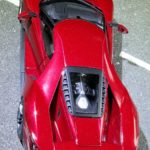 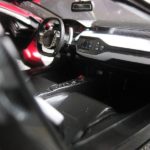 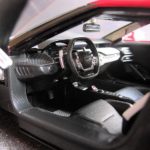