Land Yacht is the word for a luxurious floaty boaty American cruiser like this. Europeans might mistake it for a Cadillac, but in fact, the Lincoln Continental Mark V was more expensive than its GM counterpart.  So far these were only available in 1:18 scale in resin, unsurprisingly by MCG´s sister company BoS, now MCG gives us this (as usual, unfortunately, sealed) budget model. It comes in three different colours of which this here currently proves the most popular in sales. There is a dark red one that might be just a little too red but seems to be yet more popular with collectors than the gold one that closely resembles the 1978 Diamond Jubilee Edition with a jubilant golden colour inside and out, including the wheel spokes that made the original car the most expensive of them all. 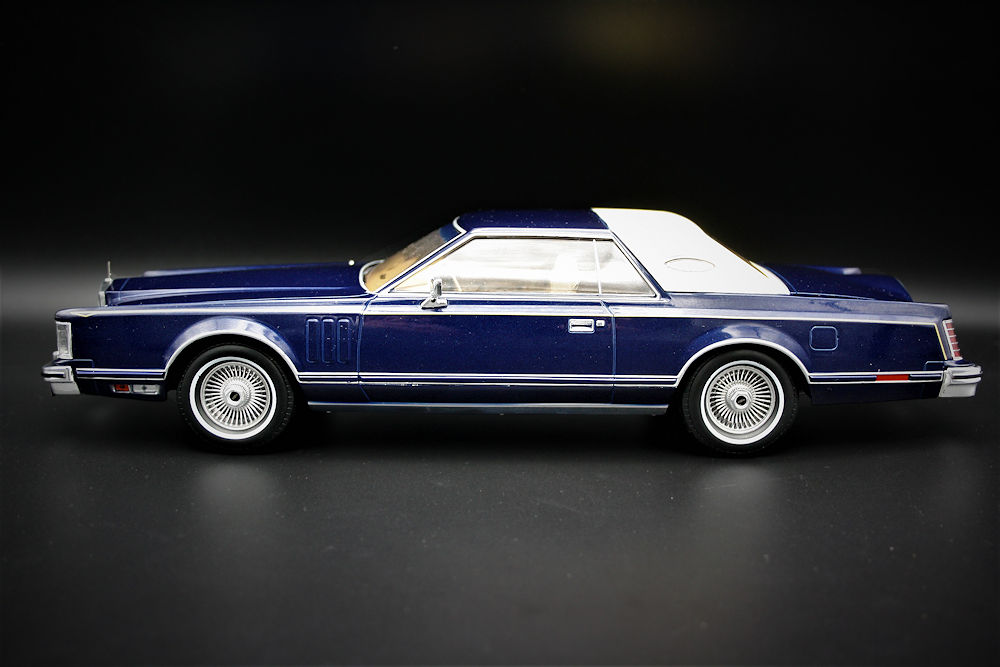 Our colour option here bears the nearest resemblance to the 1977 Bill Blass Designer Edition: it’s “darkly brilliant midnight blue contrasts with a frenched Landau vinyl roof in chamois and pigskin texture”, as the 1977 brochure informs us. The dark blue paint on the model really is brilliant, with no flaws on all this surface, but brilliance taken all too literally to be true to the original. The metallic paint is lovely to behold, but the real car´s paint was solid, not metallic. The then-fashionable Landau vinyl roof might be a little too light in colour and does not show any texture, which might be preferable to, say, Anson´s treatment of such roof sections on their ancient Cadillacs. 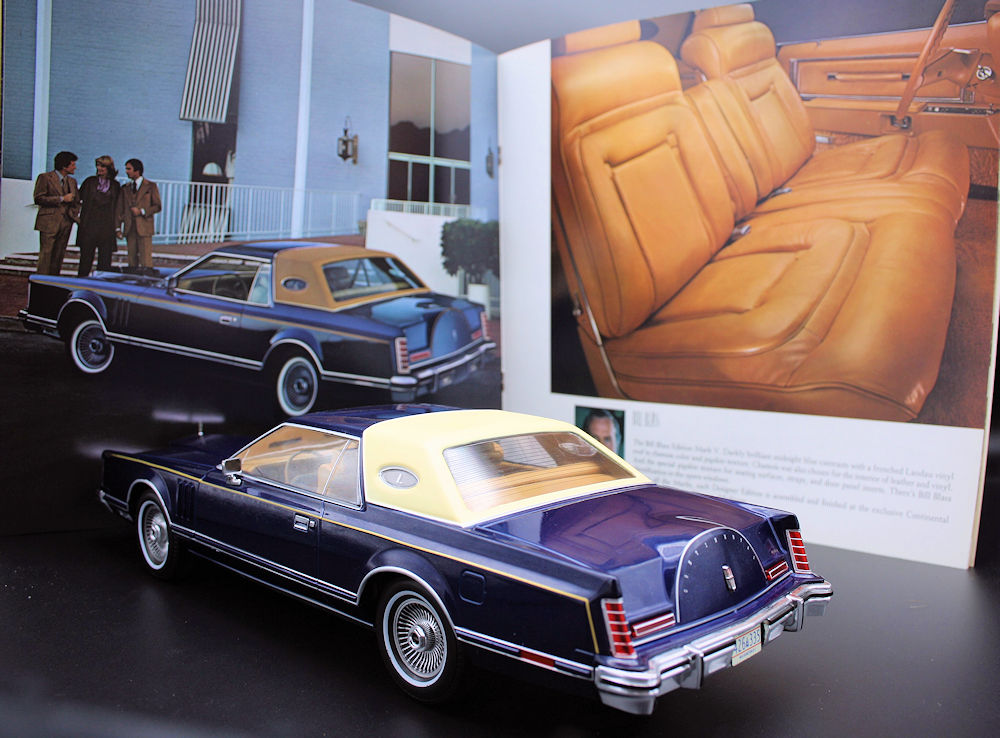 In this colour scheme, the Mark V Bill Blass Edition was only offered in 1977 (colour specs changed significantly in subsequent years) and hence has the most powerful V8 under the sealed hood, as engines were continuously detuned as the malaise era progressed. With an estimated 3000 built in this very specification, it remains pretty exclusive. Fewer were only sold of the green Givenchy Edition – and it is not hard to see why. All Designer Edition Mark Vs came with the Turbine-styled cast-aluminum wheels and white-wall tires, and so does the model, of course without tire branding or valves at this price point. That the front wheels are non-steerable can be (with a grain of salt) taken as a nod to the fact that these barges never went round corners too well, but preferred steaming on in a straight line. 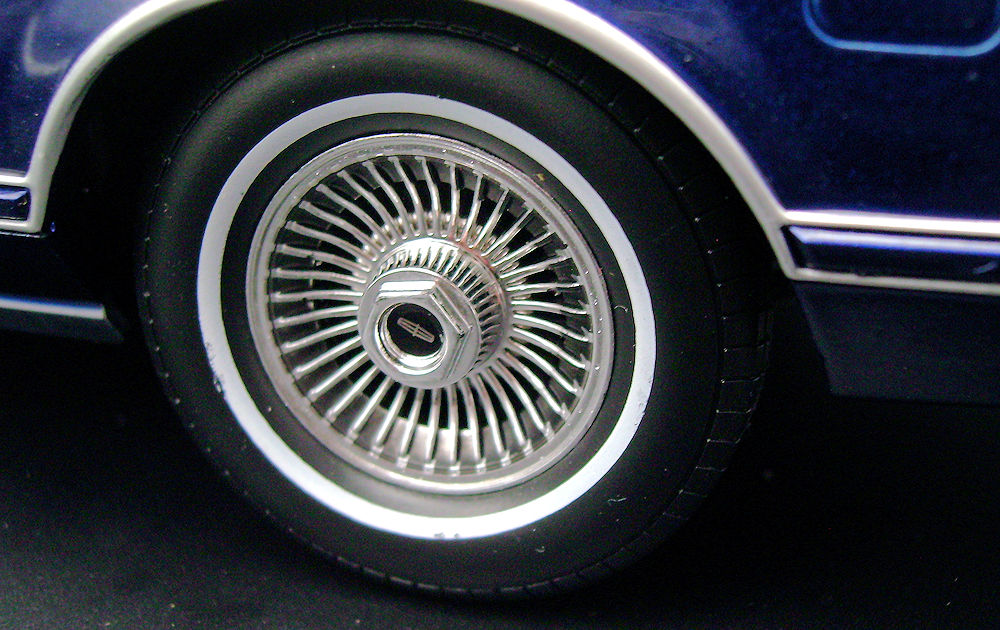 A rather nice touch is the golden pin-striping along the waistline on this version, including the triangular shape on the front fender´s foremost corner. In its original, the pinstriping was in a double line, though, while on this model (in contrast to BoS where it was correct) these merge into one thicker line. Similarly, all-wheel arches and windows are framed by a silver line that sometimes bleeds into the blue a little. The pin-stripe highlighting the arched faux spare-wheel hump in the trunk lid ought to be gold, not silver. The lettering on this signature feature of Lincoln´s two-door luxury coupe is nicely and orderly printed on, while the “Mark V” badge is photo-etched lettering underneath a transparent square sticker. The plastic Lincoln emblem on the rear might seem a little thick but resembles the original faithfully. The Lincoln hood ornament on the photoetched breakthrough Rolls-Royce-esque radiator grille is delicate metal and MCG did not fail to add the “Continental” scripts on the hidden headlight´s cover in photoetched metal. 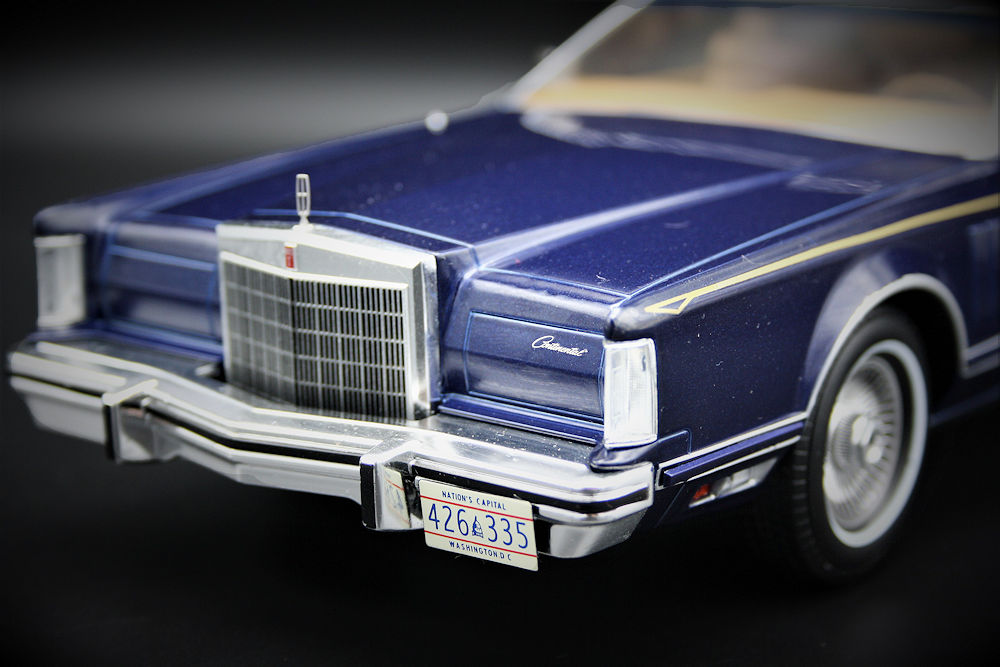 The lights of the model add particular value to it: The vertical wedged lenses on all four corners are all shine-through transparent, the rears with the silver sectioning applied on top three-dimensionally, the front ones nicely having the Lincoln logo chiselled into the lens. The horizontal taillights in the trunk lid are the same as the wedged rears. Only the front side markers and cornering lights visibly have the ugly pin attaching them to the body, the reversing whites in the rear bumper are clipped into their recess more elegantly and the rear side markers stand out as merely paint-on. The chrome on the bumpers and radiator shell is as to be expected on a budget piece. The black lines resembling rubber lend more credibility to it, but like all fine lines can have unfortunate rub-offs or may bleed into the chrome. 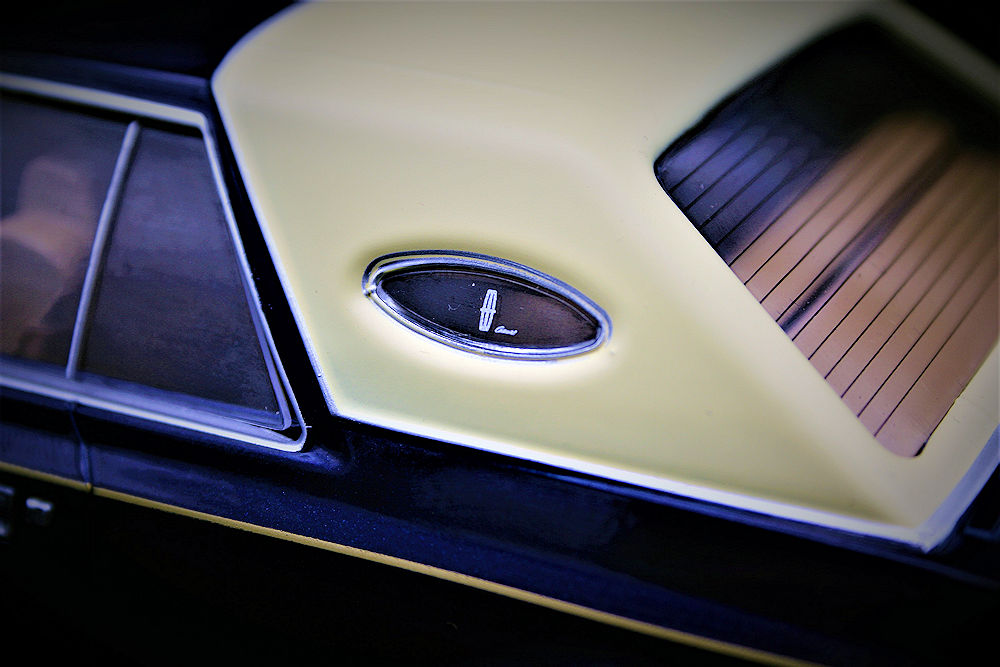 Another hallmark of the Lincoln Continental Mark V is its Ford-oval-shaped “opera windows” in the vinyl C-pillar with a Lincoln emblem and a fine script for the Edition models. The brochure says: “There´s Bill Blass identification in the opera windows.” But squinting hard, the barely legible script in the model´s opera window clearly starts with a “C”: “Continental” rather than “Cartier” (for the Cartier Designer edition) is what it seems to say here, but certainly not “Bill Blass”. Nice attempt to add such fine detail, but I suspect the red non-Edition model will (wrongly) have it too, while the resin BoS siblings did not have this. Peeping through the bigger windows (that have the advantage over BoS to be solid and not peel off) you see quite a nice sumptuous interior, without any seat belts, though, but still nicely detailed and true to original for a sealed budget model. “Chamois was also chosen for the interior”, again matching the Bill Blass Edition spec. That the windshield has a blue-tinted stripe at the top again adds realism. 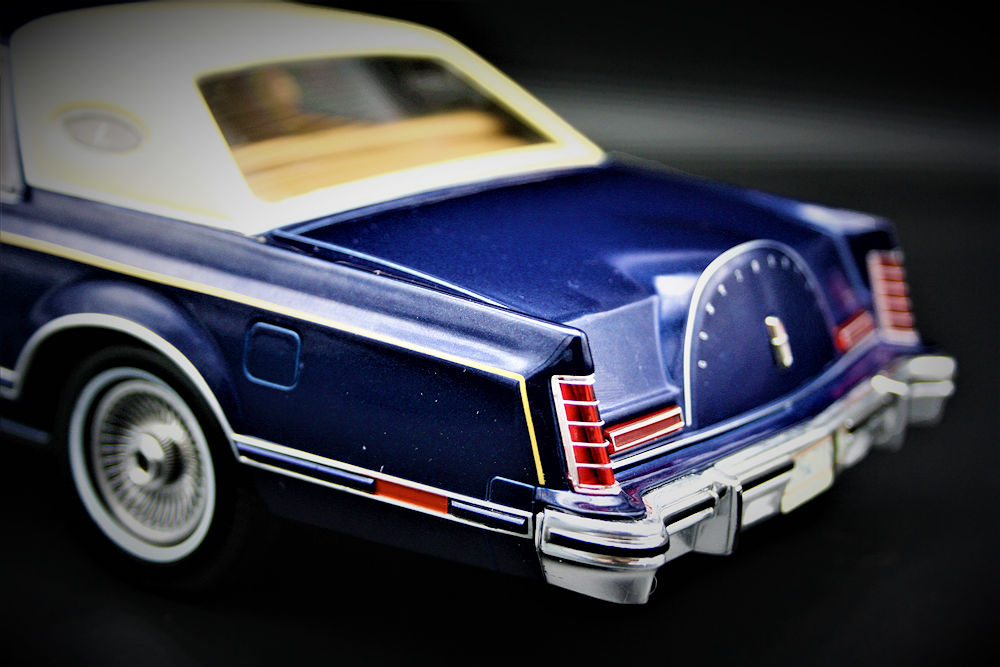 My collection is undeniably luxury-car-themed, but usually not American and hardly budget. This here drew my attention when I was looking for a ride for two soon-to-arrive wealthy Texan characters joining my 1:18 figurine cast of a 1977 road movie. I had given up on getting their Cadillac that has become unavailable now and wasn´t convinced by alternative land yachts when I stumbled on this new release … and immediately fell in love. Actually, the two might find it quite worthwhile, matching the colours of their apparel, actually even an upgrade to their Cadillac. And as the Sheriff´s and his son´s ride is from the wrong franchise too, I don´t mind too much. At less than 70 Euros I found this diecast model absolutely worth buying, probably better value for money than its more expensive resin counterparts. Or is it just sour grapes over not getting their red 1976 BoS Cadillac Eldorado Convertible for the Burdette’s? What do you think?