Words and Photos courtesy of jpm2002

It’s all Maxmania after the recent Spanish Grand Prix. I had this model since last year (great Christmas present to myself) and decided this would be an opportune moment to post my first review.

The 2015 Scuderia Toro Rosso Renault STR10 was released by Minichamps in scales 1:43 and 1:18. They also produced three special editions for the Verstappen web shop. Two 1:43 versions and a 1:18. All models are not die-cast, but resin, which theoretically means it’s more refined, more detailed and easier to reproduce in a different mould (good for race specific versions). 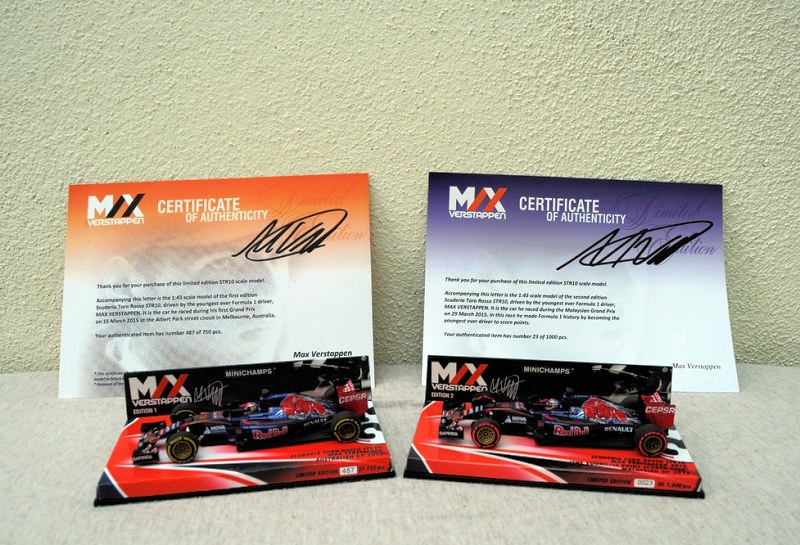 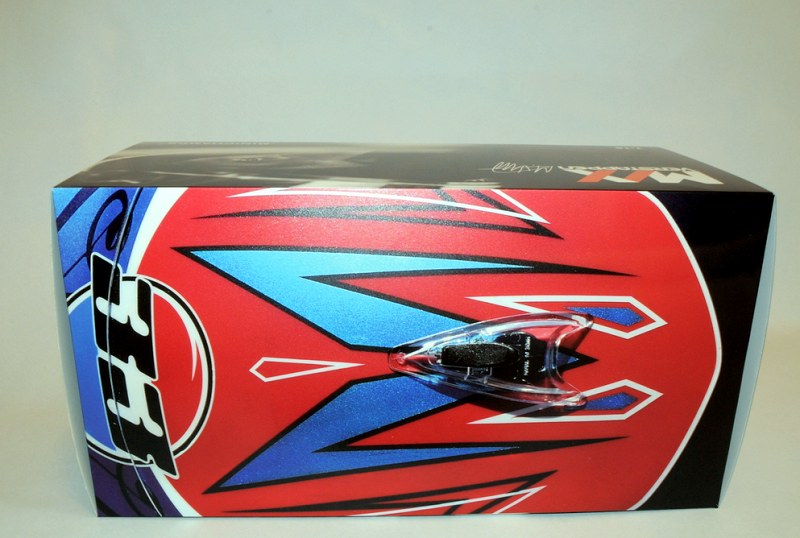 The third edition is the one we’ll be looking at. It’s a 1:18 scale of the STR10. Just like the 1:43 versions, it came is special packaging. Minichamps used different outer box art for this model. It features the Max’s logo, and the top of the box features the top of his helmet design. Inside is a styrofoam clam that is taped shut. The model itself is fixed on a base. Included is a piece of paper explaining how to remove the model with base from the lower part of the styrofoam shell. 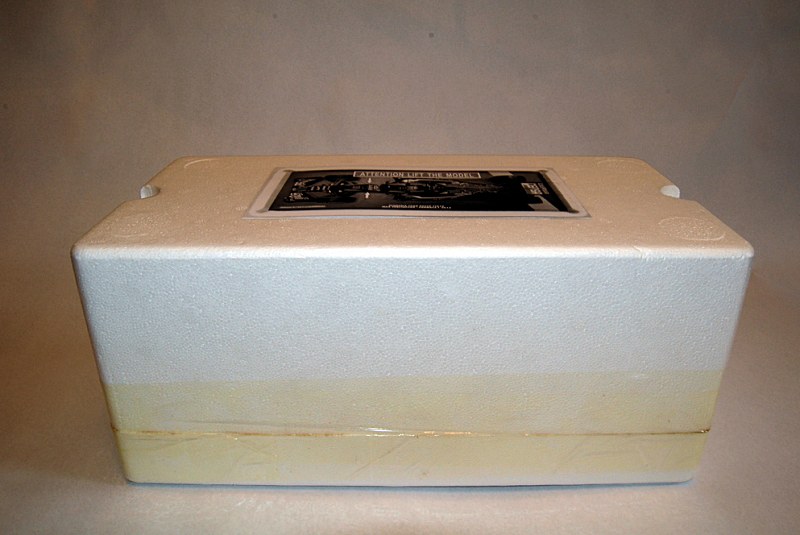 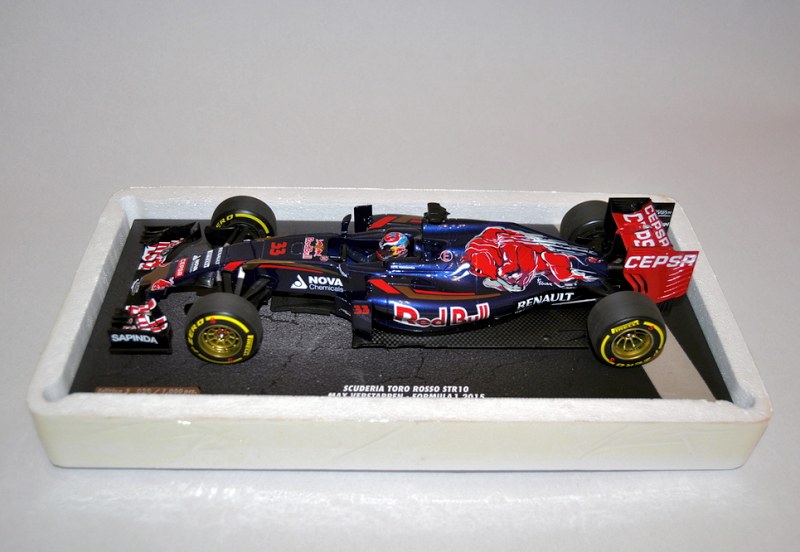 The base plate is the same Minichamps uses for all their resin releases, only to have a little plaque at the bottom left with the number of the model. Mine is #20 out of 1000 pieces. 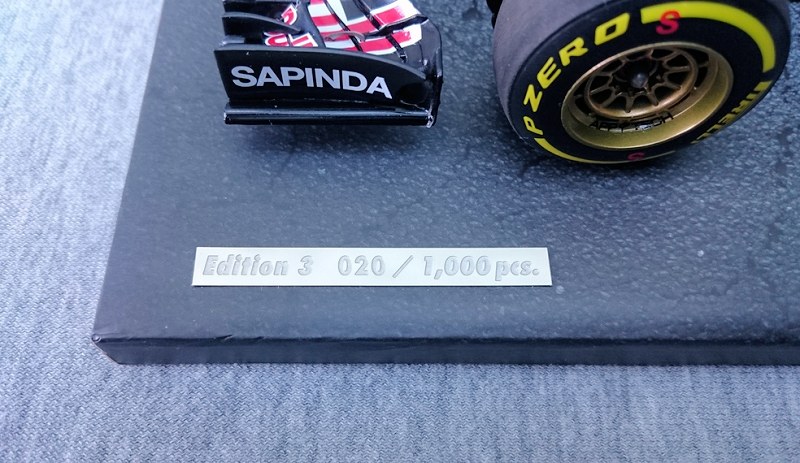 At first glance, the model looks very good. You immediately see the nice deep blue paint and the big Toro Rosso artwork on the engine cover sides. Looking at the front first, you’ll notice there are a lot of fragile little parts on the front wing. The end plates are very elaborate as well. It is a slight shame that Minichamps did not make real slots in the front wing cascade elements. Though it is understandable as it would become extremely fragile if they did. I do really like the ‘aluminum’ slot gap separators on the front wing elements. The middle piece under the nose has a carbon look. The nose itself is nicely shaped and even has the little vent at the very tip of it. 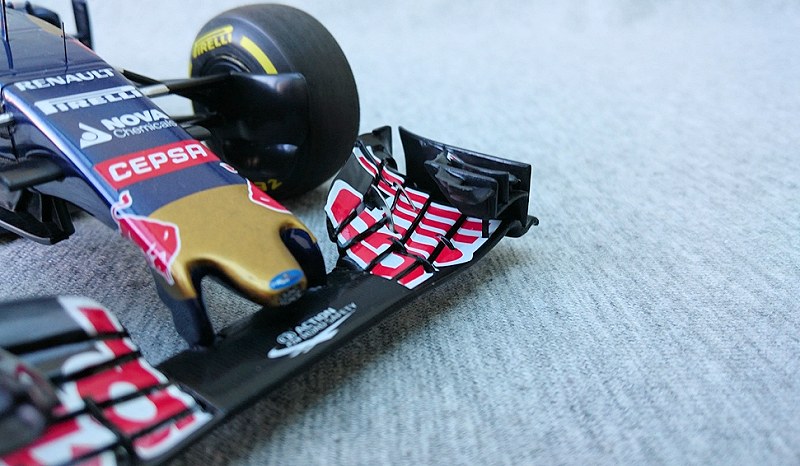 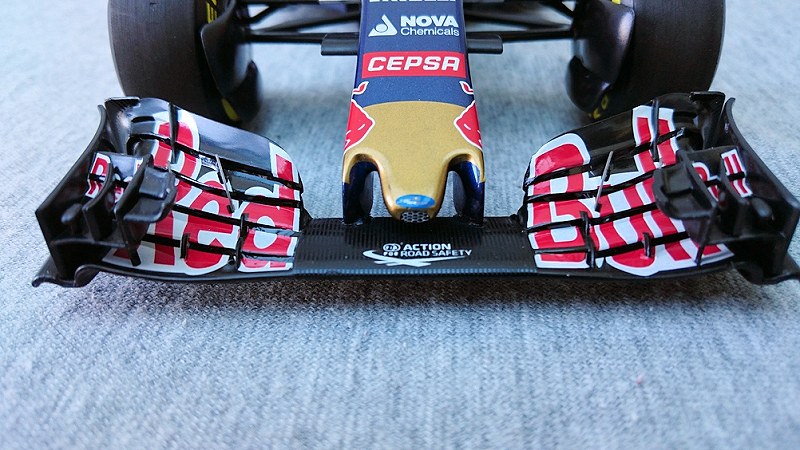 The wheels are very nicely done. The rims look good and the wheel nut is very detailed, they even have different colors on each side. There are the tire markings “D” and “S” for destra (right) and sinistra (left) in Italian due to TR being an Italian squad. They also added the rim branding decal, which always is a huge plus in my eyes. It’s a shame Minichamps did not add a tire valve to the rim. The bigger miss is that Minichamps got the color of the rims wrong. They should be a bit more brown-gold colored and not as yellow. 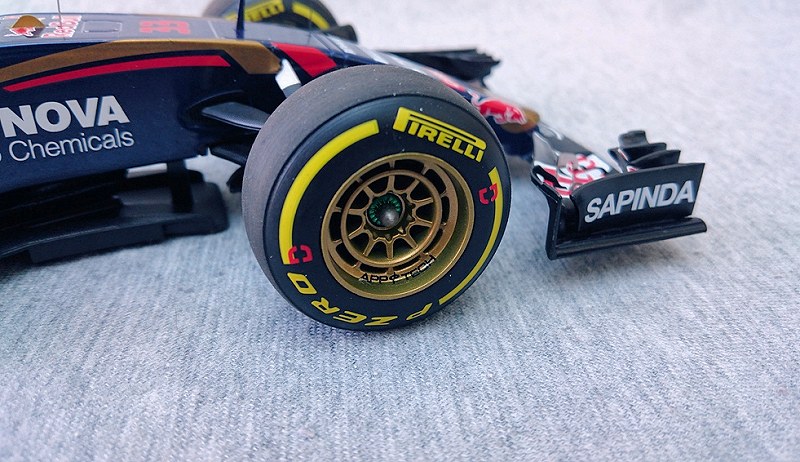 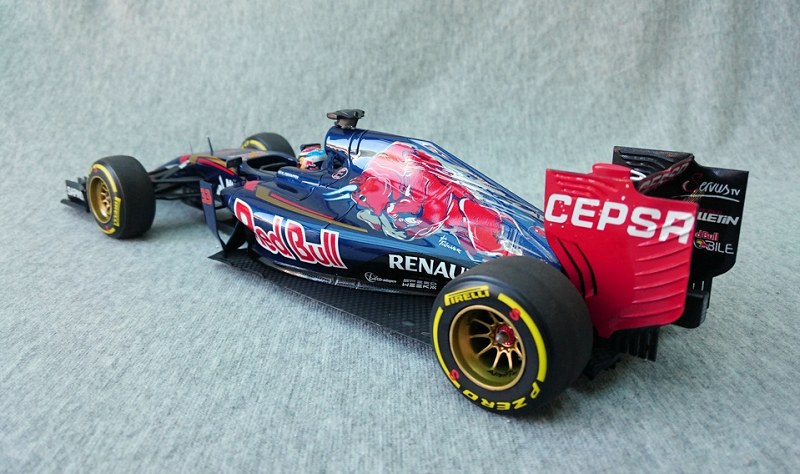 On the top of the cockpit, there are lots of antennas. They look refined and thin, which is very good. The suspension has a carbon look to it, but still looks too plastic to me. It’s good, but not great. 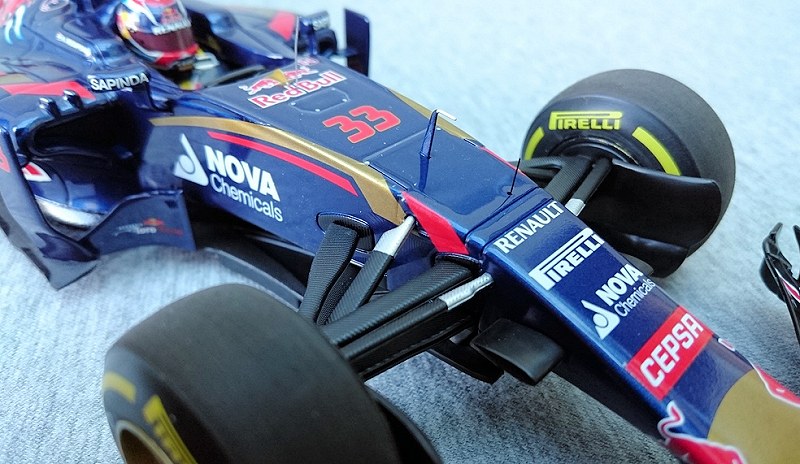 Max’s helmet looks pretty good. The shape seems to be correct and the decals are nice and clear. Inside the cockpit is the driver figurine.  Execution is nice with the seat-belts, although I would have preferred it if they would have made fabric belts. The steering wheel looks okay, but the front of the cockpit bulkhead is too plain. Minichamps should have added a carbon decal to make it look more realistic. I do like the paddle shifters on the back of the steering wheel.  Nice touch. 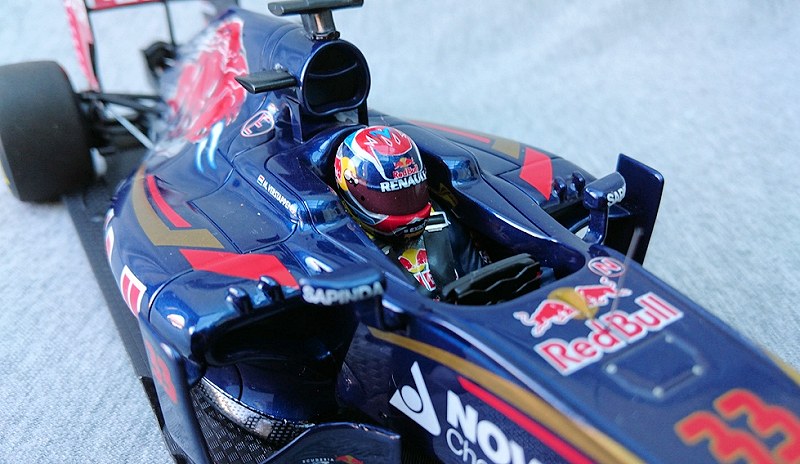 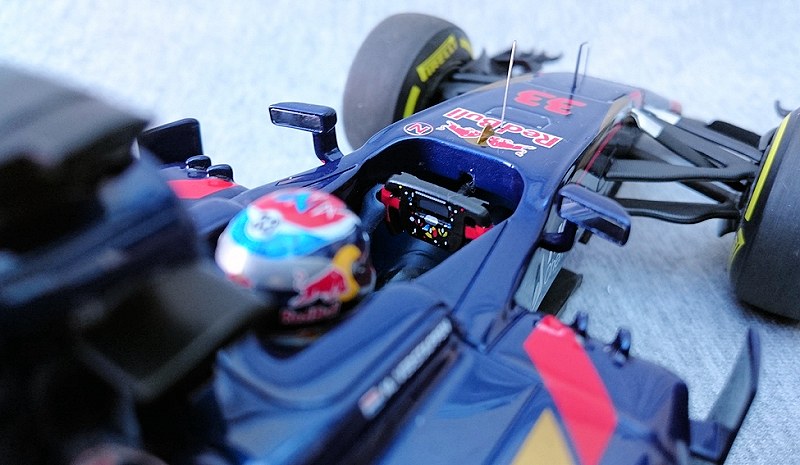 The rear of the model looks very nice though. The suspension is good, but again maybe too plastic looking. The silver rod sticking out is nice. The exhaust sticking out looks good, as does the little monkey seat on top of it. The rear wing assembly is nicely executed as well with the DRS mechanism. The end plates have two big vertical gills that are open. The top gills are not, but Minichamps did find a good trick to make it look that way. On the inside of where the gills should be Minichamps added mirrored ones to make it look like they are really cut into the end plate. 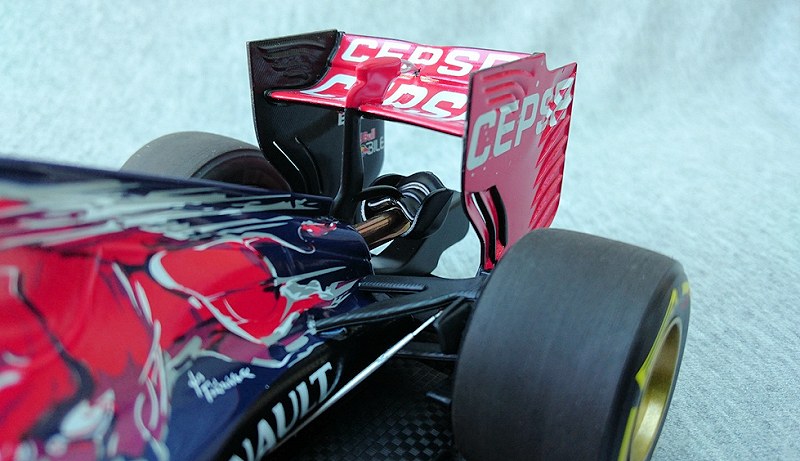 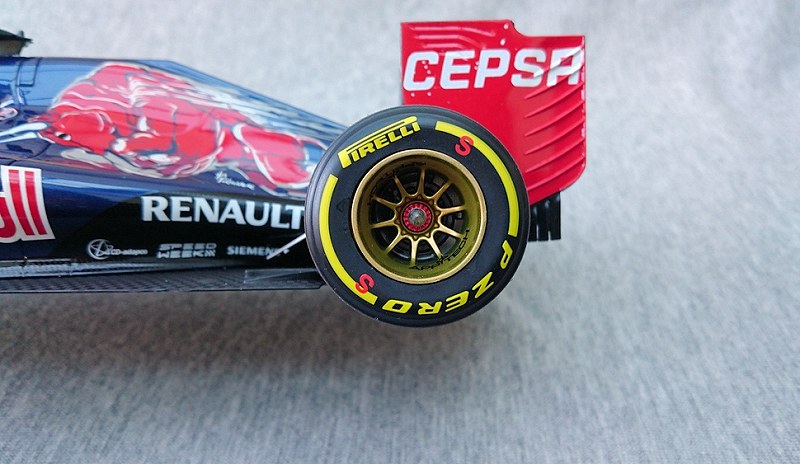 Lastly I’d like to point out the size of the car. It’s really gigantic, I compared it to an old Toro Rosso (STR03) from 2008. The overall car length increased significantly in 2010 when refueling was banned and the car acquired bigger capacity gas-tanks. But the difference is scary! I also just bought a 2015 Red Bull RB11 model (that I will review as well) and the Toro Rosso is even bigger than it’s ‘bigger sister’ the Red Bull! 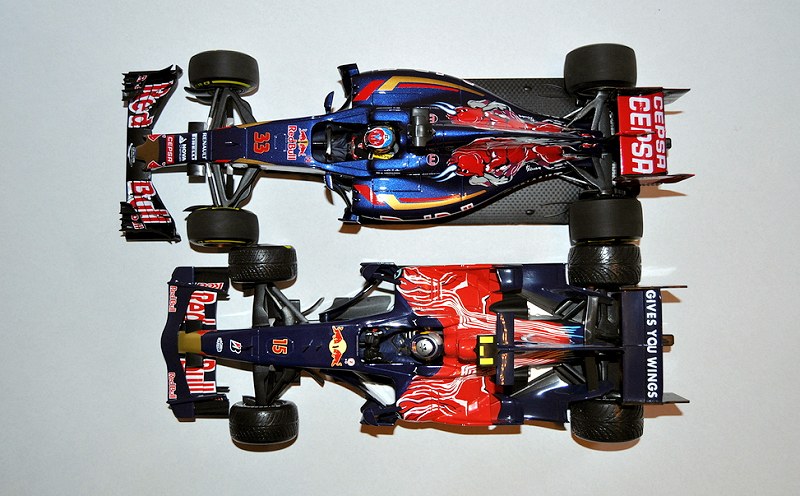 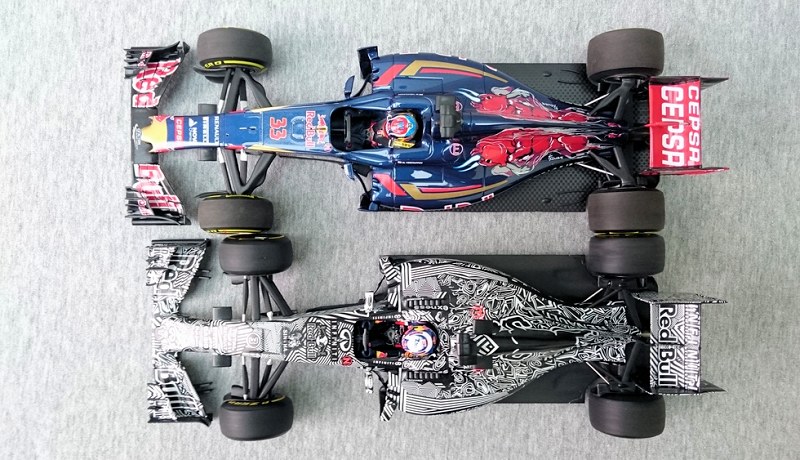 In conclusion I would say overall it’s pretty damn good. It has some nice details to it and shelf presence looks good. Though I am left with a bit of a feeling that Minichamps should have put a little more effort in the detailing, especially the plastic suspensions, the missing tire valves and the cockpit/bulkhead. Good thing it’s the first model in 1:18 of the absolute F1 star of the now and the future, so it’s an almost must-have for a serious F1 collection. Being a limited edition makes it even more special, which makes it somewhat more valuable to me. Bring on the next one’s Minichamps, and please, address those tiny details and you have an absolute stellar model on your hands! 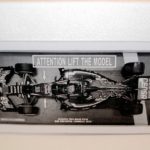 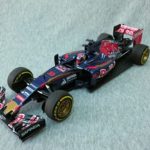 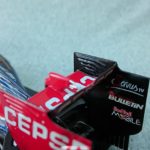 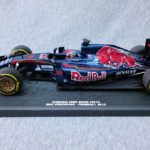