I have to admit this specific model was a bit of a rollercoaster after I ordered it.  Let’s take it back to March 2019, the Geneva Motor Show was all about the Huracan EVO and Huracan EVO Spyder, but there was also another public introduction on the stand the Aventador SVJ Roadster, the new V12 flagship model lost her roof and was now also available as a Roadster with only 800 units that would be built. 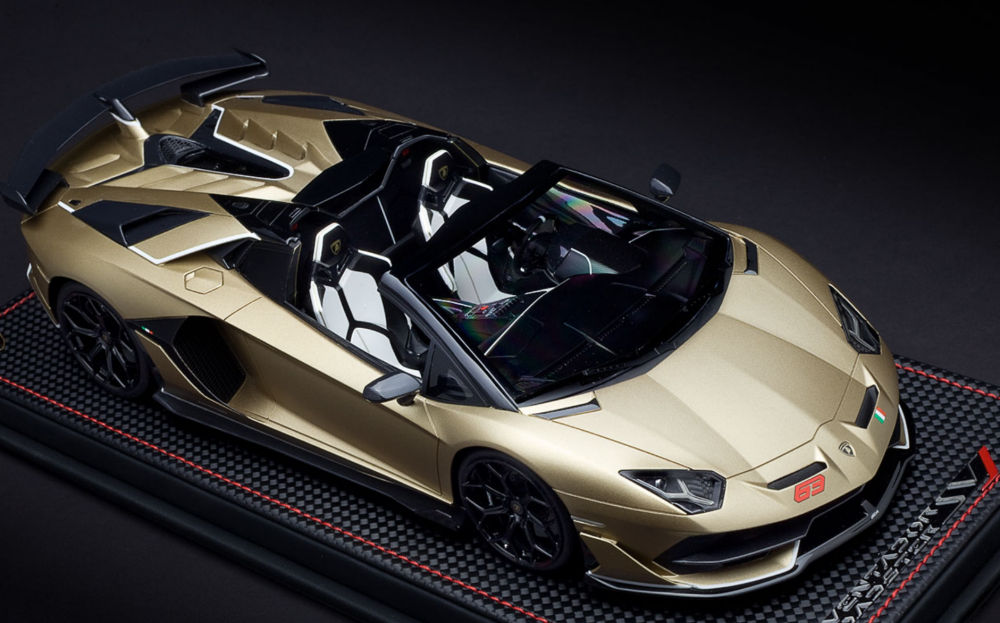 The show car was finished in an amazing looking Bronzo Zenas, a matt gold like shade combined with the Ad Personam livery in Bianco Phanes (this means the white lines on the side and engine cover), rolling on glossy black Leirion Forged wheels, a carbon fibre roof panel covers a stunning interior in black and white with gold cross-stitching, all very impressive. 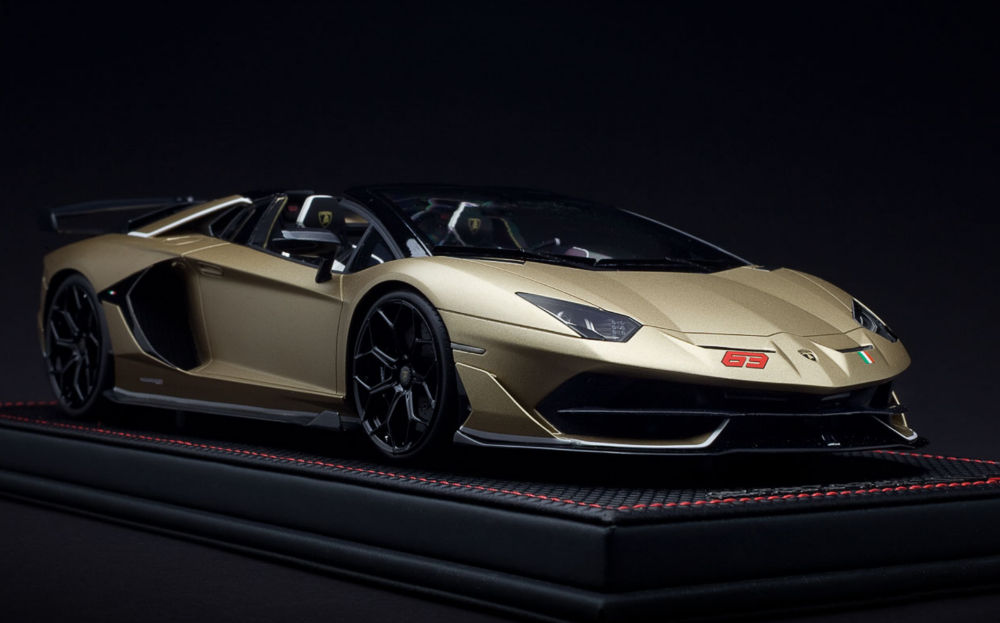 I for one love the large carbon fibre rear wing, the deep front spoiler and those big carbon fibre air intakes behind the side windows, the Aventador SVJ introduced ALA to the V12 range after we first saw it on the Huracan Performante.  Both models set a record on the Nurburgring by the was as the fastest production car in the world, and while those carbon lightweight sport seats aren’t the most comfortable (the ‘normal’ seats are available as an option) they look absolutely amazing.

I knew MR would be making a 1:18 scale model of this amazing show car in matt gold finish, but these are expensive and sealed resin, so I was really happy when AUTOart confirmed they would also be making a 1:18 Lamborghini Aventador SVJ Roadster.  I decided to wait it out and get the AUTOart version when it would be available.  This was the plan until I learned they wouldn’t be doing the Bronzo Zenas finish.  Now what? It took some contemplating, but by November 2019 I decided I would get the MR version of the Press Release/Show car livery on the Aventador SVJ Roadster, so I ordered one, luckily they were still available as only 149 units would be built by MR but it would take a few weeks before my source would receive the next shipment from MR. 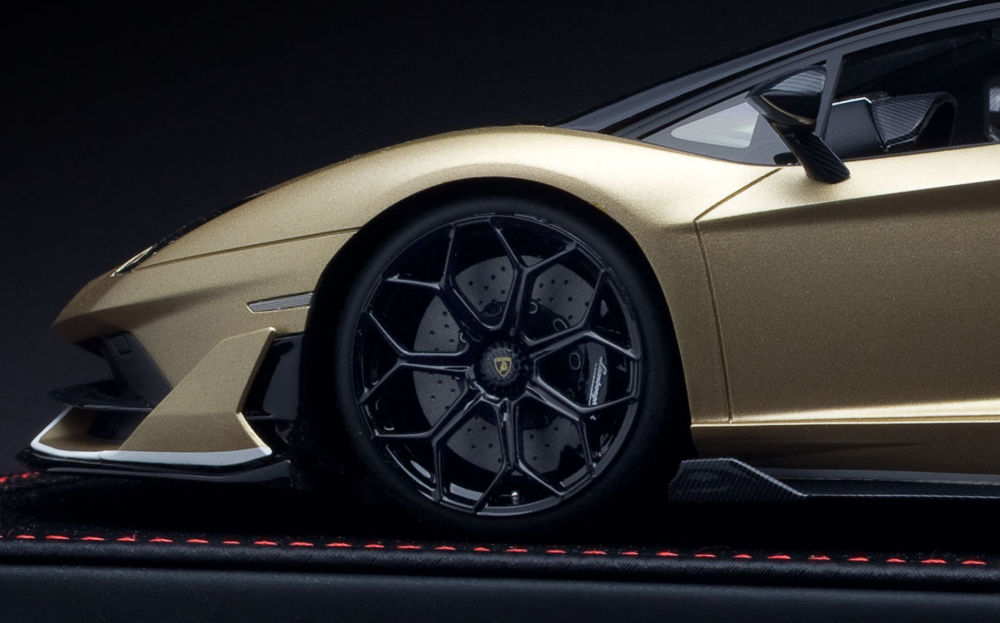 Now that would turn out just a little longer thanks to some unfortunate virus that ruined the economy in 2020, fast forward to July 2020 and finally I get word that the model arrived and would be sent out after I paid for it.  A few days later I could admire my expensive, sealed resin Lamborghini Aventador SVJ Roadster, about eight months after I ordered her.

By now I also learned that AUTOart was convinced by countless emails and comments to also release their SVJ Roadster in this shade, but still, I wasn’t disappointed when I opened the classic black MR box to find this amazing model under her Plexi cover.  Complete with a detached roof (a single piece while the real car comes with a two-part roof) and that amazing Aventador SVJ Roadster script on the carbon weave leather plinth.  I love the fact MR adds the logo of the model on their plinths, makes it even more impressive. 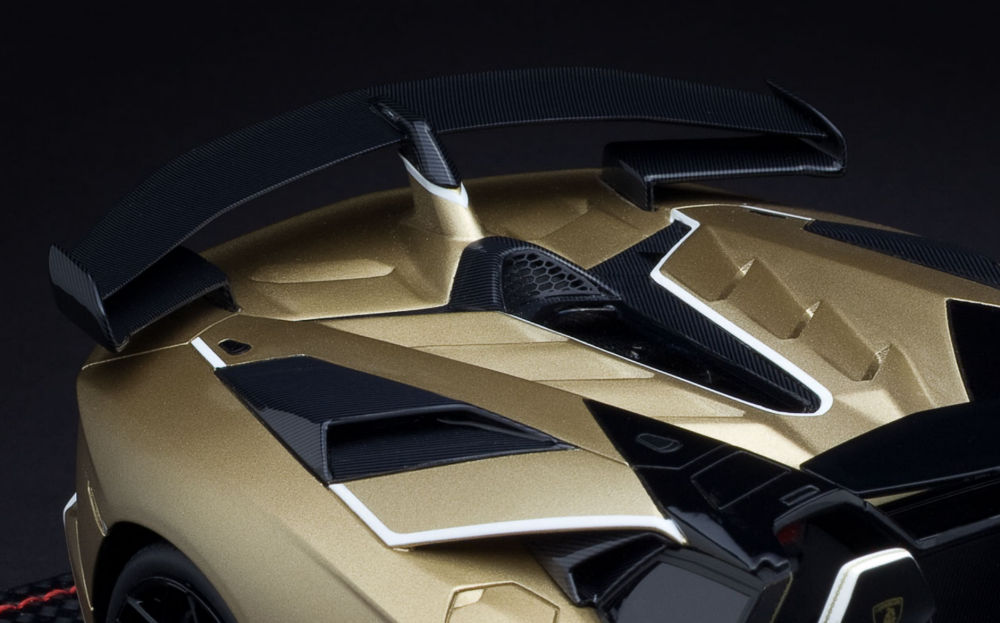 I was a little surprised to find out I got hold of model #93/149, I imagined these were close to being sold out, so with 149 built I expected to be very close to that final number, but I guess not, and what surprised me, even more, was the fact the QC was done on 14/05/20. Confirming this model built in May of 2020, or have all 149 been built already and they only checked this one before shipping to my seller at that time… strange nonetheless.

But let’s take a closer look at this amazing car, the paint on these MR is amazing, as usual, I did find one dust particle in the paint, so I guess that one got passed the Quality Check, but other than that I couldn’t find much wrong with this model, it looks like a 100% scale replica of the Geneva Show Car, apart from two things. 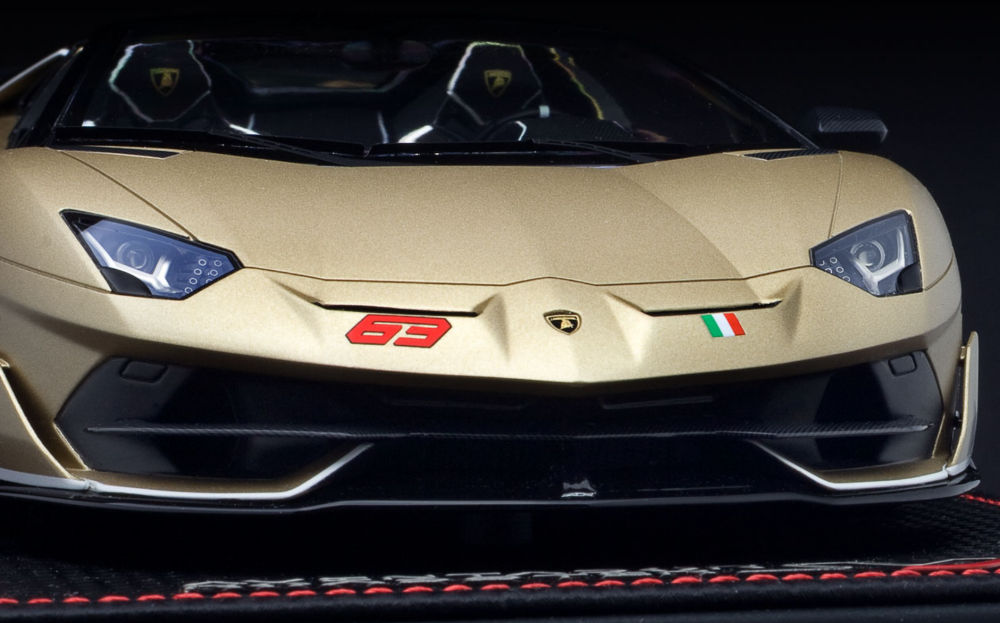 Just as on the MR model of the Aventador SVJ 63 they put a chrome Lamborghini script on the dashboard, that’s wrong, on the SV, SV Roadster, SVJ, and SVJ Roadster that script should be gloss black.  You can order a chrome one, or even a gold plated one as an option, but on the show cars, this was black.  Unbelievable they missed that on four models in a row.

But there is a bigger issue I found with this model, take a closer look at the front of this specific MR Aventador SVJ Roadster:

There is an Italian flag on the front of this model, and on the other side, there is a red ’63’ fitted that was never seen on the official factory press car nor the Geneva Motor Show car.  I was present in Geneva when the pulled the black satin cover from the real car.  There were no decals on the front bumper, so what’s up with that MR? 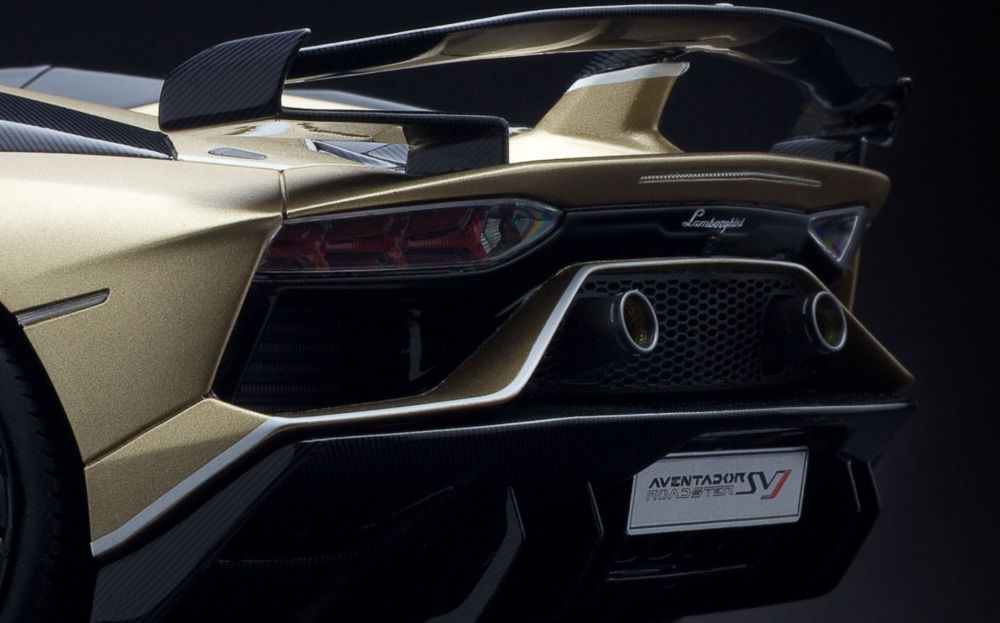 You know I’m a firm believer in adding the press/show car configuration for every Lamborghini model to my collection, that is specifically why I ordered this MR model as I didn’t know AUTOart would be releasing the same shade, so I was a bit disappointed with that 63 and flag at the front.  Still, it was an original LAMBO039A model, #93 from 149, so what happened?  I decided to email MR about it and they got back to me a few days later:

“This is a special version we made. Sometimes we produce a special model in standard series. It means that you are a lucky guy because you have a unique model.” 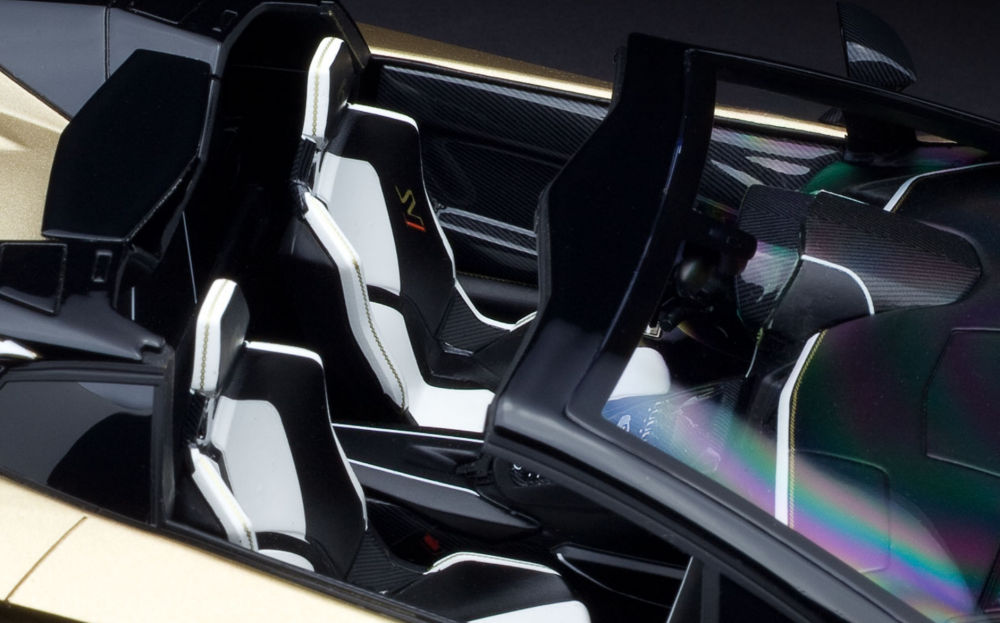 So is this MR made 1:18 scale model of the Lamborghini Aventador SVJ Roadster a must-have for your collection? In a way, I would say yes, but I would also think about waiting for the AUTOart to be released.  AUTOart’s version will come with opening doors and a removable engine cover.  I paid €380 for this MR, and I think it is very likely by the time the AUTOart becomes available we’ll be looking at about €300 for it, so it’s not really about the price that you should base your decision on.  Unfortunately by the time, the AUTOart SVJ Roadster comes out all of the 149 MR ones might be sold out, and likely demand a higher price to obtain.  That’s why I still got this MR model so late in the game and I will still get the AUTOart one too, perhaps not in the same shade, but at least one AUTOart Aventador SVJ and one AUTOart Aventador SVJ Roadster will join the collection later on.