Another famous theme playing on our mind with this model: The car (or one of the many Ferraris used) driven by Thomas Magnum, private investigator, in the original series “Magnum PI” from the 80s when Higgins was male. And again, it is a budget model, this time by Norev.

Now, it is not that the Ferrari 308 GTS Quattrovalvole had never been made in scale and this does not aim to come anywhere near the Kyosho from all those years ago. Like the “Bandit” vehicles and the “Miami Vice” Ferraris, this is aimed at nostalgic fans of 80s TV shows who would not want to spend Kyosho money. Choices are made more difficult with GT Spirit just having announced to release their version of the same car only a couple of months later. So you might be wondering, whether to buy this Norev now or wait. 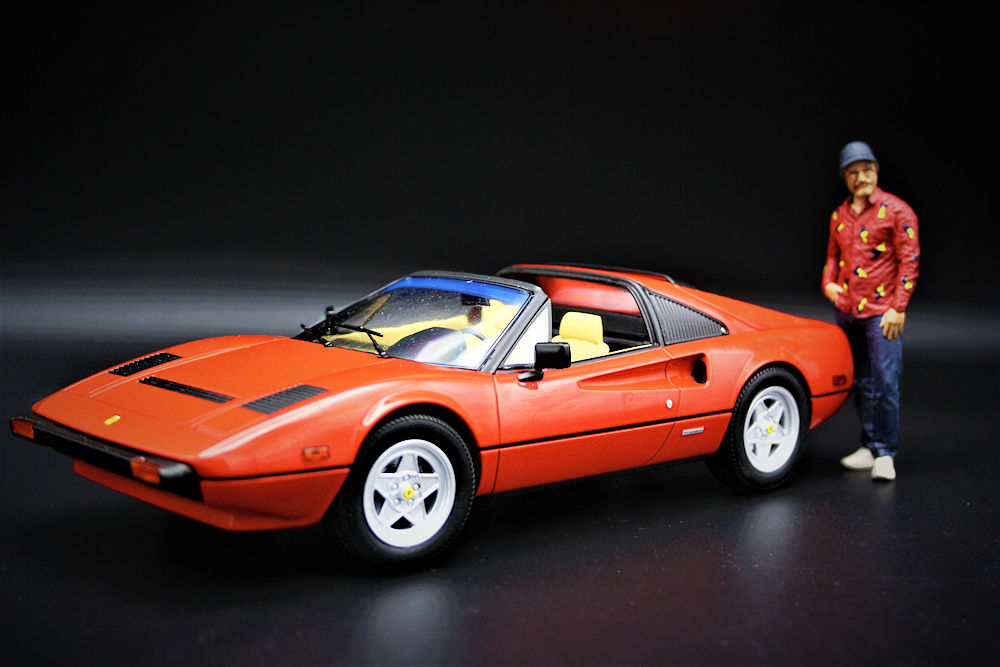 The car is sealed and except for the detachable smooth-fitting targa-roof-panel nothing opens on this model. The more remarkable that deep furrows convey the impression that doors and engine cover could be opened more successfully than on most sealed models. This is all the more important as the smoothly applied red paint does not make covering up the missing function easy. As to be expected, the black vents on the front and the engine cover are not perforated. 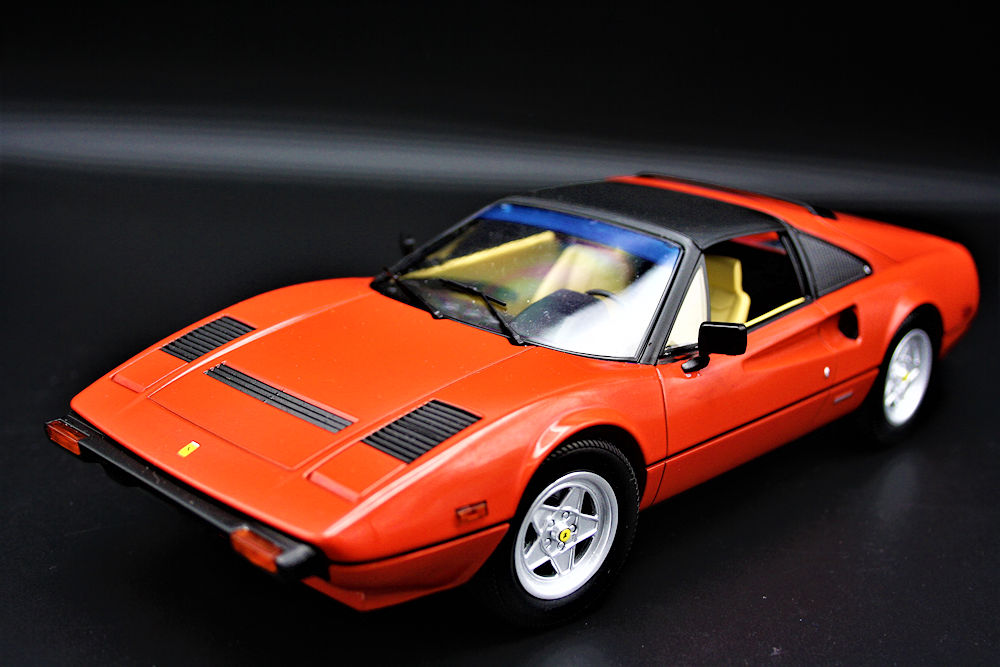 The headlights don´t pop up either, yet appear as if they could. The visible indicator and side marker lenses are somewhat simple. The same with the US-spec rear side markers, while the rear lights are better in having the relevant pattern on the lenses, sufficient depth in the reflectors and even the lightbulb. Norev has given Robin Master´s Ferrari the recognizable ROBIN-1 Hawaii Aloha State registration with the King Kamehameha head, but the right top corner badge should probably be 81, not JLY. The Ferrari script, prancing horse and 308 Quattrovalvole badges are nice and shiny chrome photo-etched applications. The quadruple exhaust pipes are surprisingly good at this price point too. They haven´t missed out on a rather simple chromed plastic stub for the retractable antenna and rather nice Pininfarina badges behind the doors. The air intakes behind the doors are not penetrating the body into the engine bay, but are blackened and recessed far enough to create the effect. 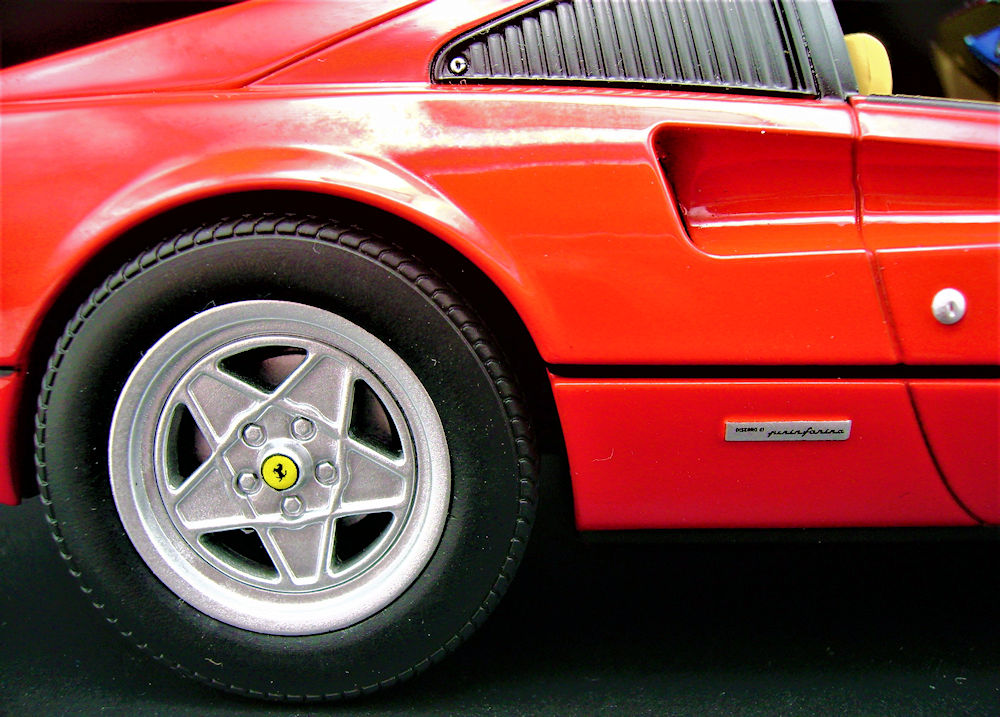 The wheels clearly aren´t a strong point. There are no tire markings or air valves, unlike in the photos shared by GT Spirit. On the plus side, the front wheels are steerable, which is unlikely for the GT Spirit. 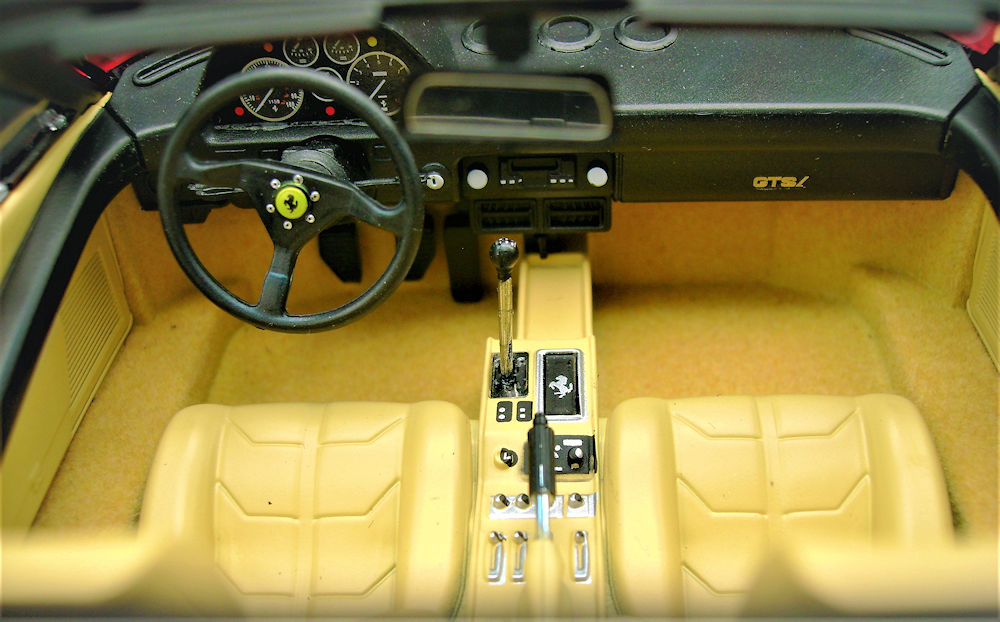 The doors have nicely chromed locks, but no (or lowered) side windows with triangular windows that would not disappear with the windows down. Unlike the GT Spirit, the Norev comes with a blue windscreen sun visor strip top. In the interior, the Norev shines with 3D switches and levers on the centre console, while GT Spirit´s photos look merely print-on or stickers in two dimensions. A pleasant surprise is the carpeting of the floor. The absence of safety belts is lamentable in both, with the Norev not having even locks near the seats. 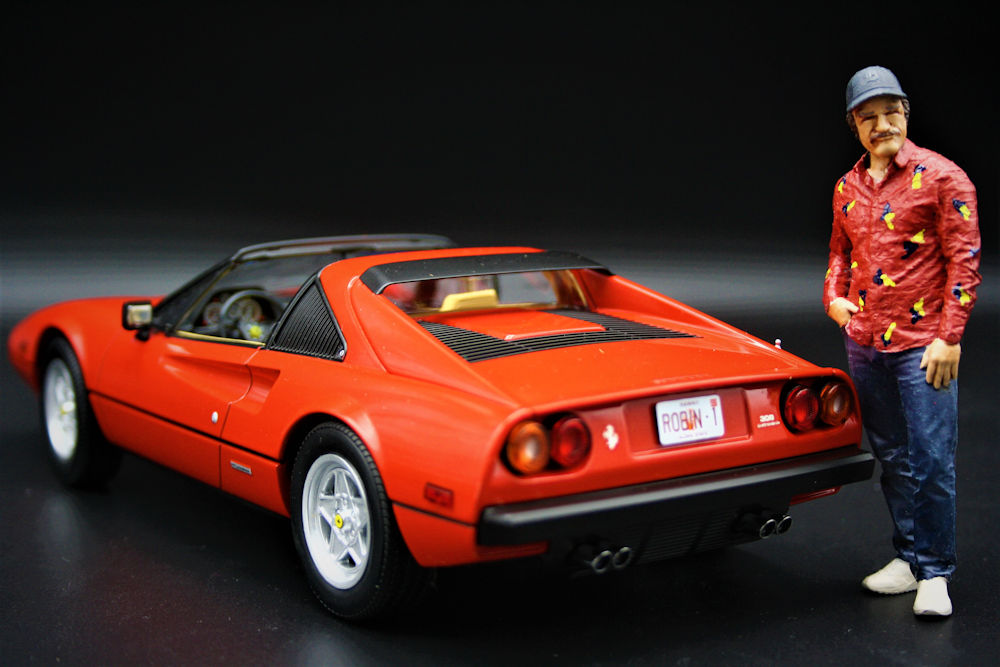 When we announced its release, this model was instantly met with enthusiasm, demanding the Ferrari license for Norev. Aside from the fact that no model manufacturer needs a license (as I often pointed out before, e.g. in the context of CMC´s Ferraris), this was immediately contested by others who demanded the license for Kyosho. Indeed, the Norev is nowhere near Kyosho´s 308 GTS QV and it is not improbable that there might be a re-release after all the Lambos are being reissued again. There are other manufacturers who make Ferraris (BBR, CMC, MCG, Burago etc.) with the 308 having quite some competition in scale. Buying the Norev is probably not about buying the best 308 replicas out there, but you could do much worse, particularly in terms of bang for the buck. And it is in this category I can happily recommend it for our MOTY-Awards.