The R129 generation of the Mercedes 500 SL made its debut at the Geneva Motor Show in March 1989, in exactly the same colour scheme in which Norev depict it in this limited edition. Design-wise and from its tech-innovation it immediately rendered its predecessor a vintage car. It offered ABS and traction control (ASR), a new integral seat that included the seatbelt and of course the world´s first anti-roll-bar that remains hidden from view to leave the roadster´s silhouette uncluttered and only deploys when a roll-over is detected within a split-second. Before that, you could only choose between the safety of a fixed roll-bar as in the Volkswagen Golf Convertible (called “little strawberry basket” here Germany for its box-with-handle-appearance) or the dangerously stylish no-roll-bar-design of the likes of the Alfa Romeo Spyder. 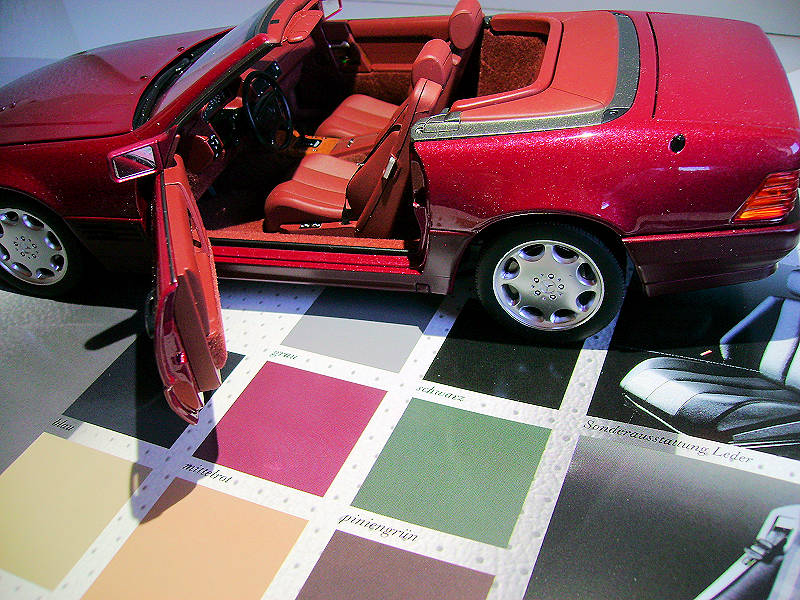 Funnily, airbags remained an option and weren´t standard, not even in the initial top model, the 500 SL – the 600 SL with its V12 was only added later. In the brochure, Mercedes predicted that it would remain state-of-the-art well into the nineties and probably into the new millennium. 30 years later, you must admit that it has indeed aged well, better than many contemporaries, so that it is more than understandable that not only Norev pay credit to it through a new model. 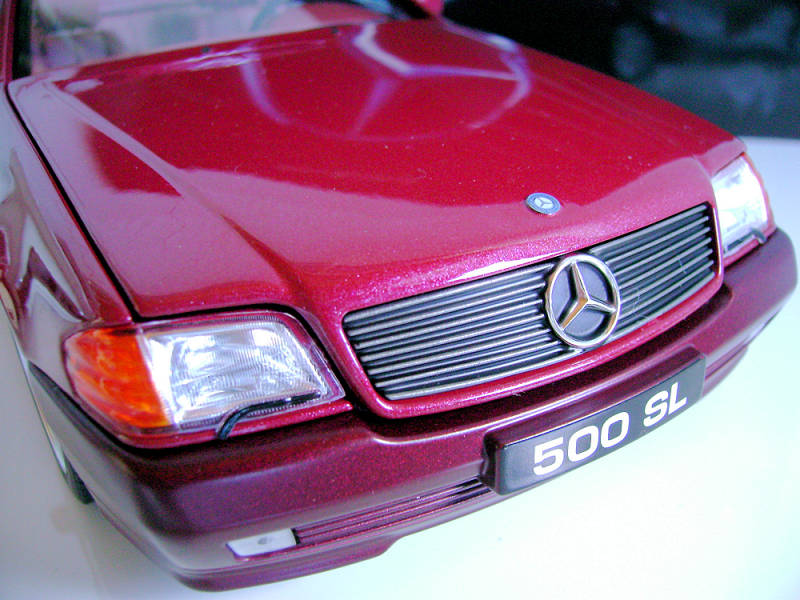 While certainly not being the same quality as the AUTOart 600 SL, the Norev is the best 500 SL model to date and of course surpasses the Maisto that was my first 1:18 model as a teenager, the Revell that followed on its heels and it is IMHO even preferable to the sealed KK model, although it comes with neither the soft nor the additional, optional hardtop despite having something like mounting holes in the parcel shelf. The Maisto had the superior interior over the Revell, but the side-by-side-photos reveal exaggerated wheel arches. 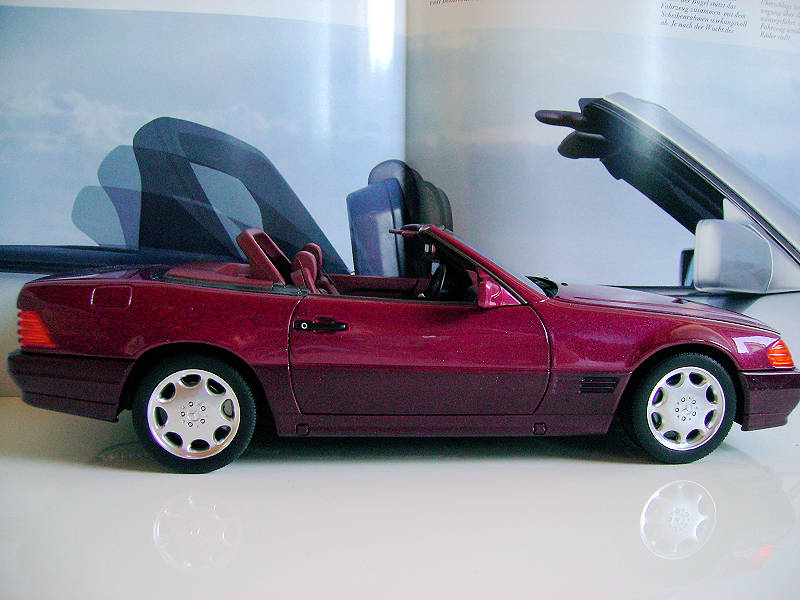 Starting with the exterior, Norev´s proportions are adequate and the paint is applied flawlessly with fine metallic flakes. Again the comparison with the Maisto reveals how model manufacturing has advanced over the past three decades. The special edition colour chosen here seems to be the shade that the brochure describes as almandine red with the lower plastic plank being a darker shade than the other red paint schemes. The lights are good and don´t reveal mounting pins or clips as in earlier Norevs, notably superior to Norev´s R107. The headlights´ cleaning wipers are moulded on, not extra pieces as in the Revell. Trunk and doors have silver keyholes, the Mercedes emblem on the hood is a raised badge and a photoetched piece on the trunk. Strangely, there is no 500 SL badge on the trunk and I will probably add this. Laudably, the SL has the antenna socket, though not an extendable/retractable antenna (that I will probably add, too). 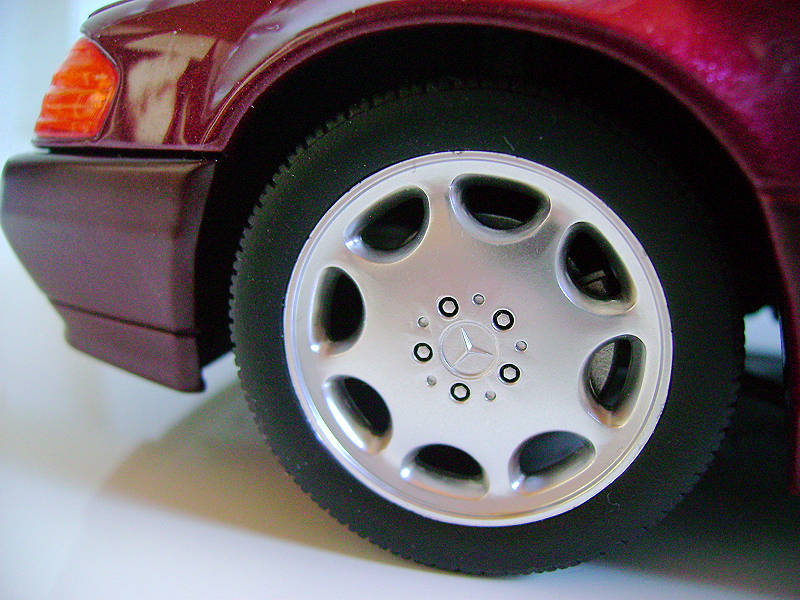 The wheels are very nice, neither flat grey as on the Revell nor cheaply flashy chrome as on the Maisto, yet credibly alloy-shiny with pronounced, retracted wheel nuts and a shiny Merc star at their centre. Great, despite the missing tire-wall branding. Upon closer inspection, you may even make out relatively simple brake-discs and calipers, although the relatively closed rim-style does not require them. 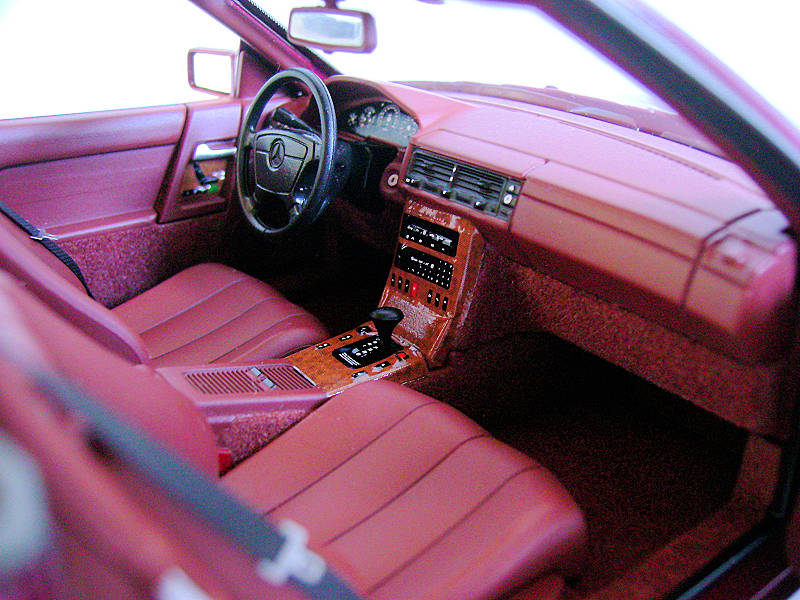 As mandatory for a model of a convertible, greatness continues in the interior (if you may call it that in a convertible). While the collector may consider opening doors dispensable with the roof down, they yet do open. Inside, the Merc has a rich dark brownish-red – “mittelrot” according to the brochure, the brown on offer was a lot darker. Again, this was exactly the launch spec presented at the Geneva Motor Show. The model even has fabric seat belts front and rear, but I am not sure whether black is the correct colour here and on the steering wheel. Both somewhat stand out like a sore thumb and were clearly available in the same dark brownish-red. It may be a cost-cutting short-cut for a multi-colour-range model. What certainly is well done is the wood trim on the centre console and the array of buttons. The hazards correctly stand out in bright red, the convertible-roof-button on the right-hand-side glows red, too, when used, but is a translucent black when not; hard to depict, so Norev is not to blame. 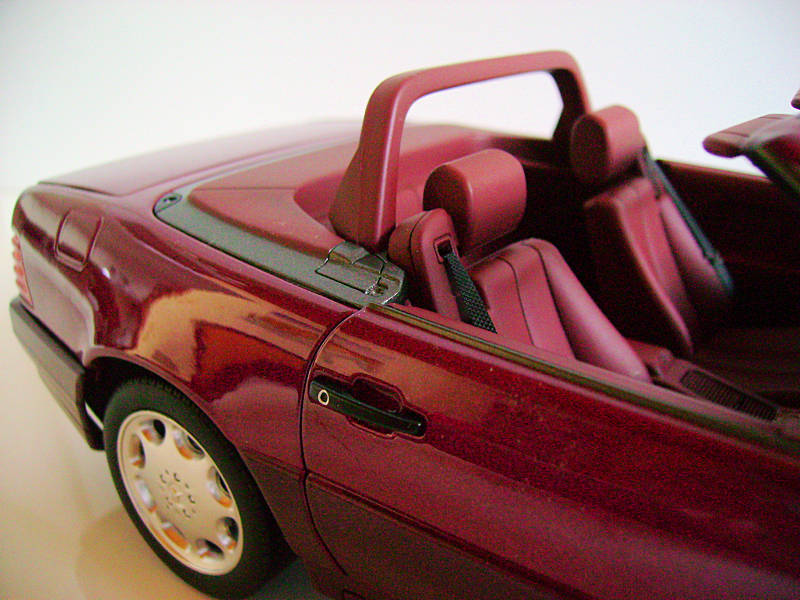 On photos of the real SL, you may count different numbers of buttons, depending on the option-boxes ticked; Norev isn´t wrong but has not ticked all of them. The depth with which details like the air vents are moulded again underlines the progress models have made over the past three decades. The doors´ inside is well-made, too, replicating the carpeting, the wood-trim and the memory-buttons for the electric seats as well as credible print-on loud-speakers for the stereo. The sunvisors and windscreen trim may be one of the reasons, why there is no roof option for the model that may compromise its looks; at least it did on the Revell. Instead, and in contrast to the KK, the roll-bar is deployable. 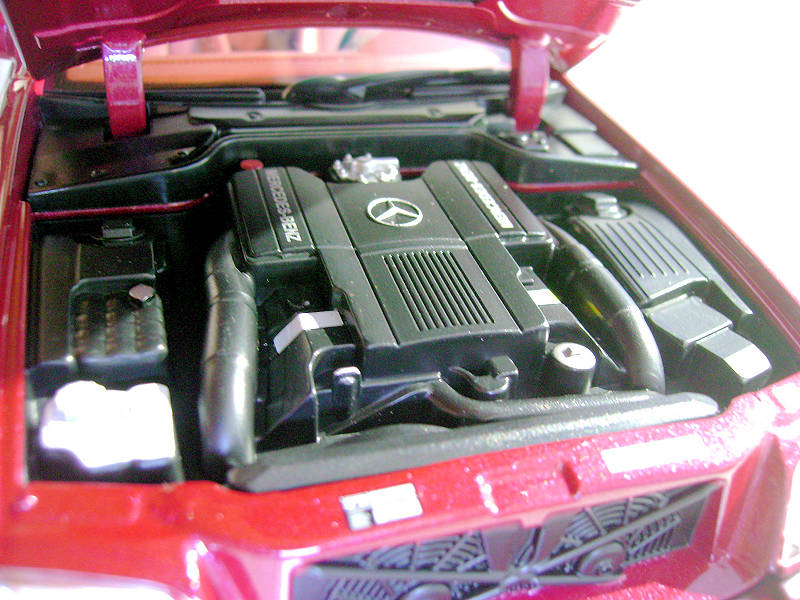 Under the hood, you find the satisfactorily detailed V8 of the SL 500 with stickers and all. Not bad for a mid-range model. The boot is fully carpeted and has a warning triangle under the lid in the Mercedes-typical place. 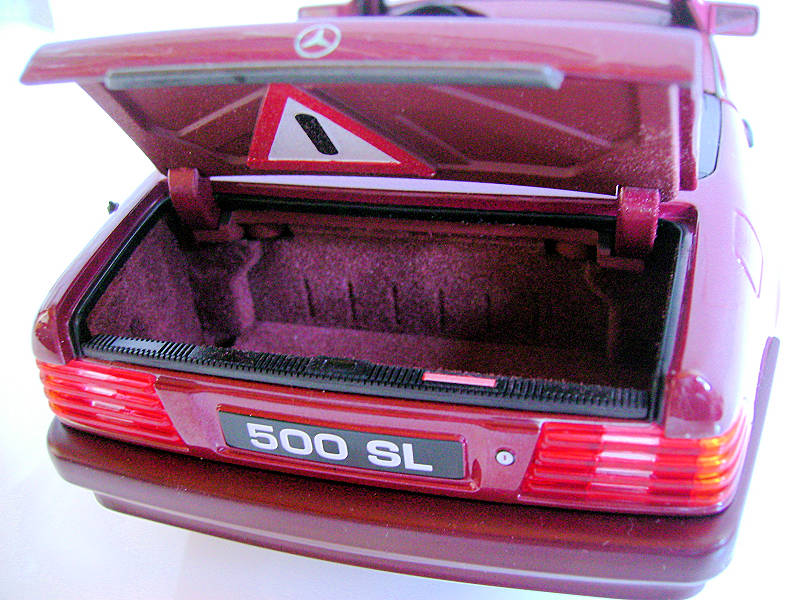 Norev´s R129 500SL is not just another superfluous remake poured into a saturated market as is too often the case now. It is a welcome update commemorating the 30th anniversary of a great Mercedes. As good as it may be in grey and although colour tastes are open to debate, this dark red limited edition (#183716) is special in that it replicates the Geneva Show car better than any other 1:18 model ever did. Why a French manufacturer´s model of a German car formerly revealed in Switzerland is exclusively available in Eastern Europe and Russia in a normal Norev box, not as a dealership edition, while the same manufacturer announces a different version (#183715) for the rest of the world and remains silent about this attractive alternative, remains a strange secret.