If you’re familiar with Schuco, then you know that apart from releasing the VW camper van in an alarming number of configurations, they every now and then put out a superb model, without much preview or fanfare. They kind of just pop up at the stores and you scratch your head and think, well I didn’t see this coming. The Mercedes 280 SL Pagoda Cabriolet. The model is said to be limited to 2000 pieces, and indeed that’s what the brochure says, but both on the model and the little metallic plaque that comes with it, it says “0655/1000”. I’m not sure what exactly happened here. I’m still not very clear on whether this is really limited to 2000 pieces, or they’re planning an overall run of 2000, with another colour fulfilling the other 1000. Either way, I’m not concerned with such things, so I was pretty anxious to get a good look at the model in person, after being quite impressed with the pictures. 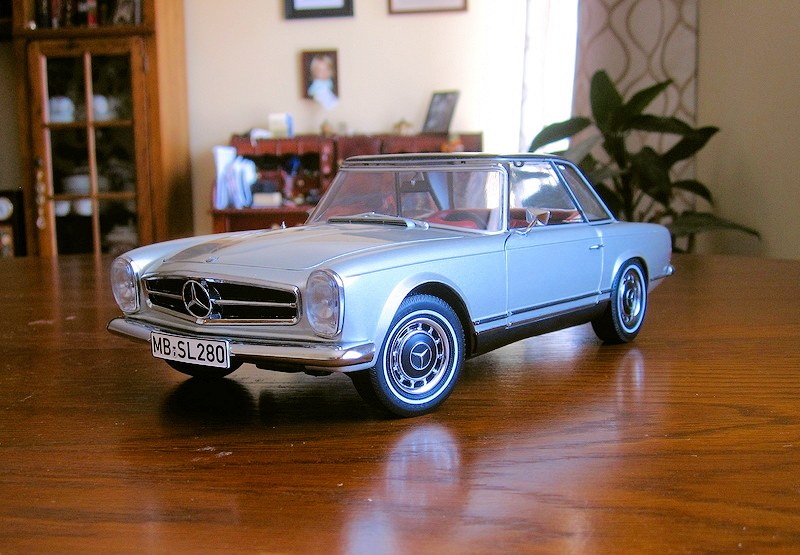 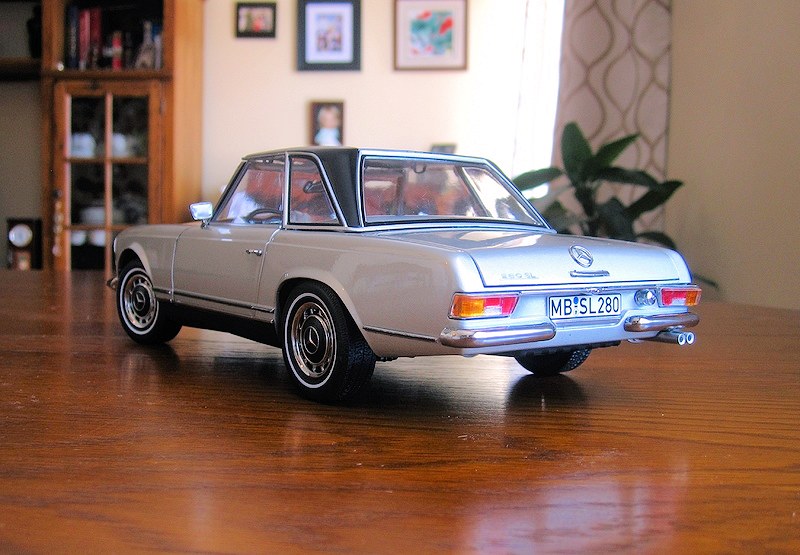 On close examination, the paint is not applied as evenly as I’d hoped it would be. There’s a detectable orange peel look to it that may bother some picky collectors. The black paint on the removable hardtop is very smooth, so it may have something to do with the composition of silver paint. The shutlines are rather large, especially around the hood and trunk, but if you consult pictures of the 1:1, they weren’t that great there either. It was the 60s after all, and tolerances were probably to the nearest centimeter. The wipers look nice, with the stalk in plastic but the blade portion in photo-etch material. The scoop located just in front of the windscreen is perforated as well. All the various badges and logos are done very well but Schuco used such a small amount of glue that almost everything you touch comes off in your hands. For me this included the left rear light, left mirror, right kick plate for the interior, and the reflecting portion of the rear view mirror. Use more glue, Schuco! Tisk tisk. Not a big deal though, cause all of these things can be glued pretty easily. 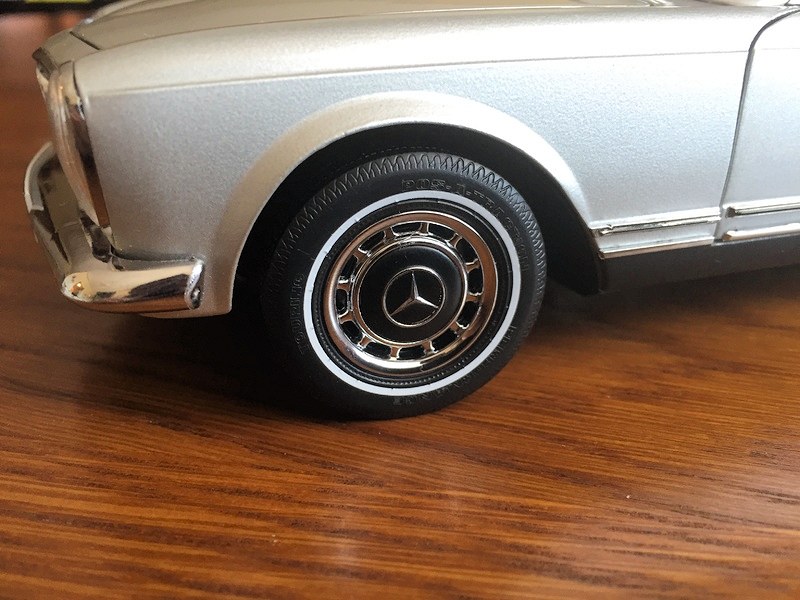 The wheels and rims are mostly done well, with the handsome white wall tires sporting script on the sidewall, and shiny chrome hubcaps with brakes and calipers poorly visible but present. The chrome trim, of which there is a lot on this car, is done well, without any ugly mould lines. The one running along the side even has a black pin stripe printed on top of it. The headlights and taillights are done well too, but I’m not too happy with the plastic exhaust. 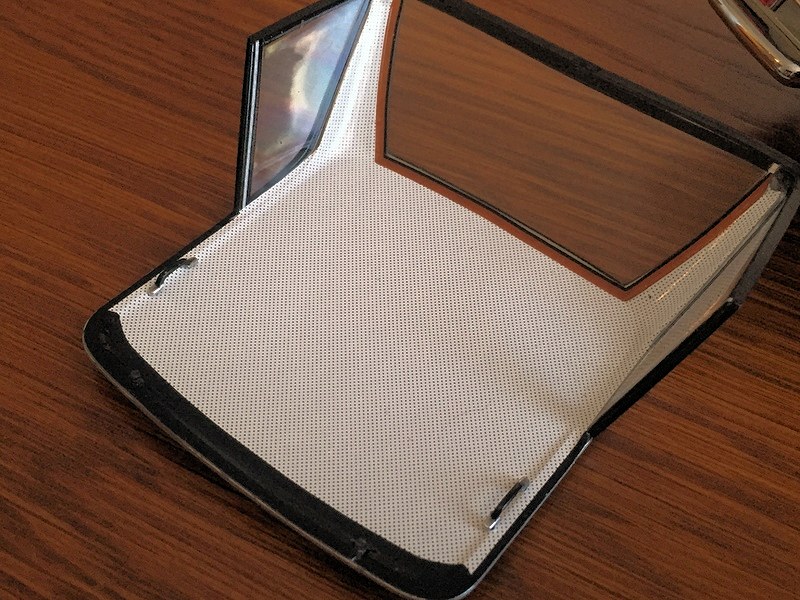 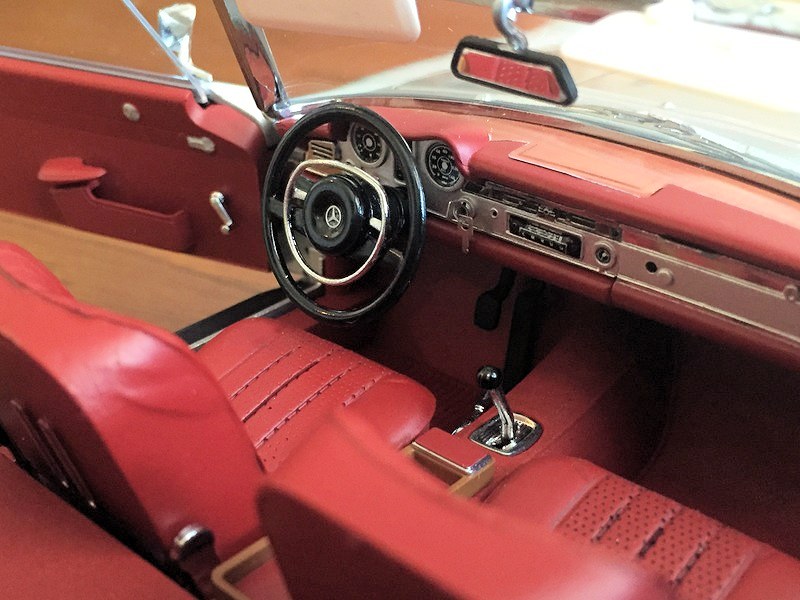 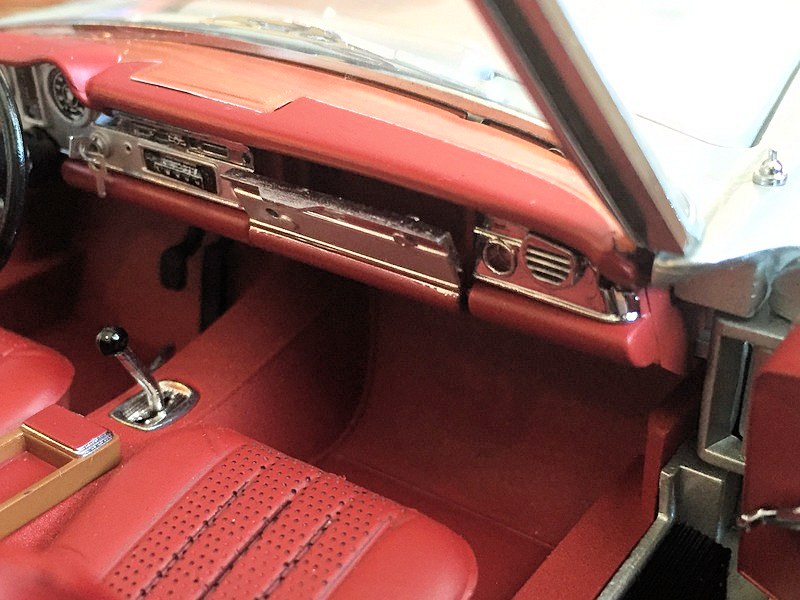 The removable top is easily taken off and put back in, so don’t handle the model without taking it off first, or it’ll fly off for sure. Schuco even bothered to put a polka dot decal on the underside of it and install some handles. I’m quite satisfied there. The red interior pops very nicely against the silver exterior, but is a mixed bag of materials. Carpeting is sadly absent and instead you get a rough texture to the plastic. The seats are made of rubber and are squishy. The rest is done very well and you even get a working glove box (which doesn’t open far enough) and sun visors (the passenger one has a mirror). The trunk houses a spare tire and is otherwise featureless apart from a wire hiding in the corner. 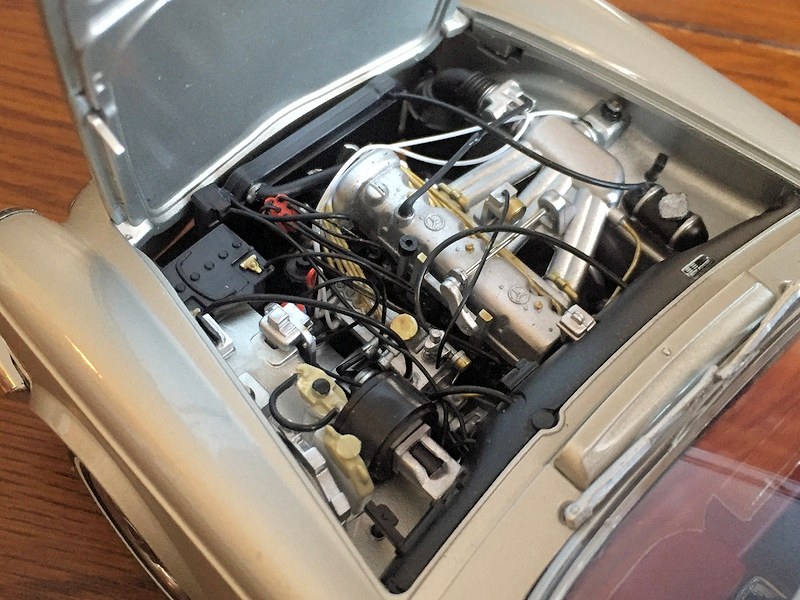 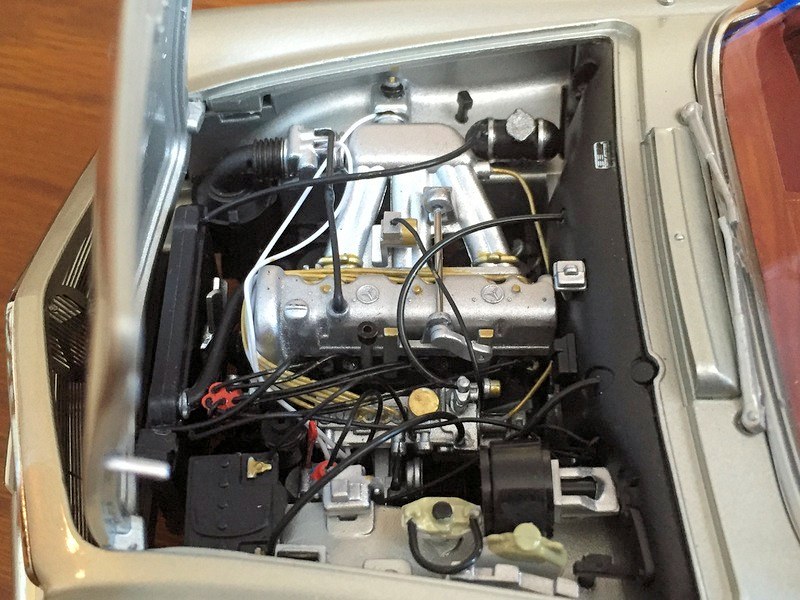 Moving on to the engine, we have a mostly impressive show, with adequate plumbing and wiring. Take note, I took pictures of the engine after adding a bit of colour coding to it, so it’s not a representation of what it looks like out of the box, although that is readily available if you search the model on Google. Either way, it’s an impressive engine and I applaud Schuco for putting in real effort there. The front grille is perforated by the way, and if you shine a light at it, you’ll be able to see the radiator. The undertray is actually also impressive, showing three dimensional functional suspension detail, with fuel lines and a trio of wires running along the entire length of the model. 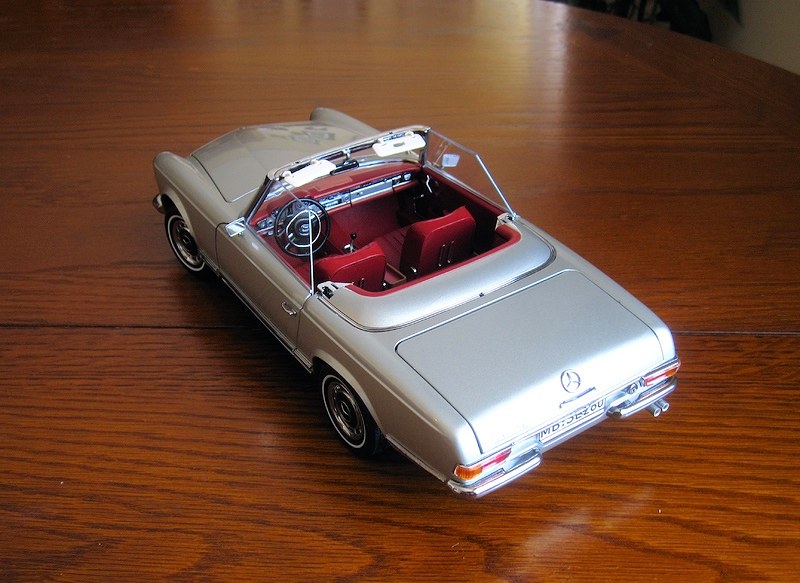 So should you buy this model? Despite the flaws, I’d say yes, definitely. It displays extremely well, and apart from the various trim that keeps falling off, I can’t find too many things wrong with it. Fans of the brand (Mercedes, not Schuco) will ensure that these will sell out very quickly, so you can risk waiting for another colour, which I’m quite sure will come, or you may want to get a move on and get one of these soon. My only criticisms are that the paint isn’t too smooth, and I wish the windows were removable cause they look weird being fully wound up when the hard top is removed. Other than that, I’m grateful to Schuco for releasing yet another gem. 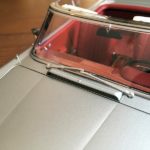 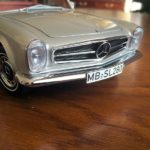 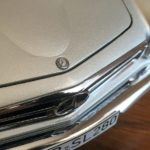 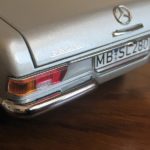 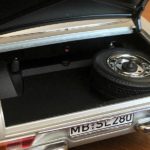 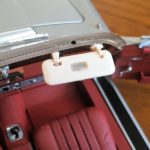 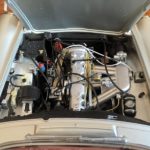 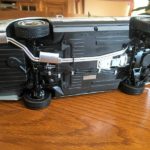 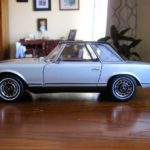 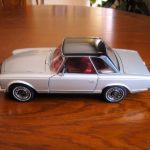 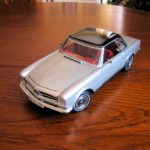 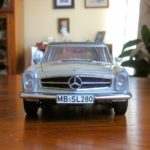 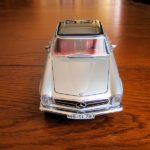 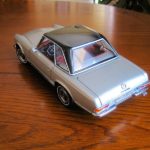 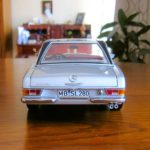 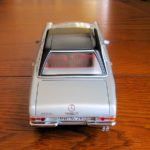 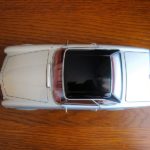 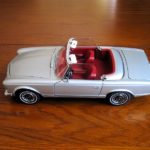 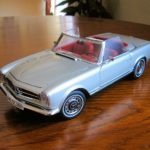 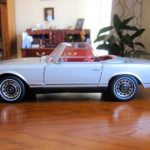