What a pleasant surprise when Solido announced their Dodge Challenger Widebody models. I was thrilled, but then AUTOart also announced theirs which were fully opening versions. AUTOart released theirs first and I almost took a bite for a couple of theirs as it seemed like Solido had abandoned that project as it took a while to release. However, in the Spring of 2021, BOOM, Solido’s Challengers were released in “Sinnamon Stick & Go Green” colours. Colour me impressed! 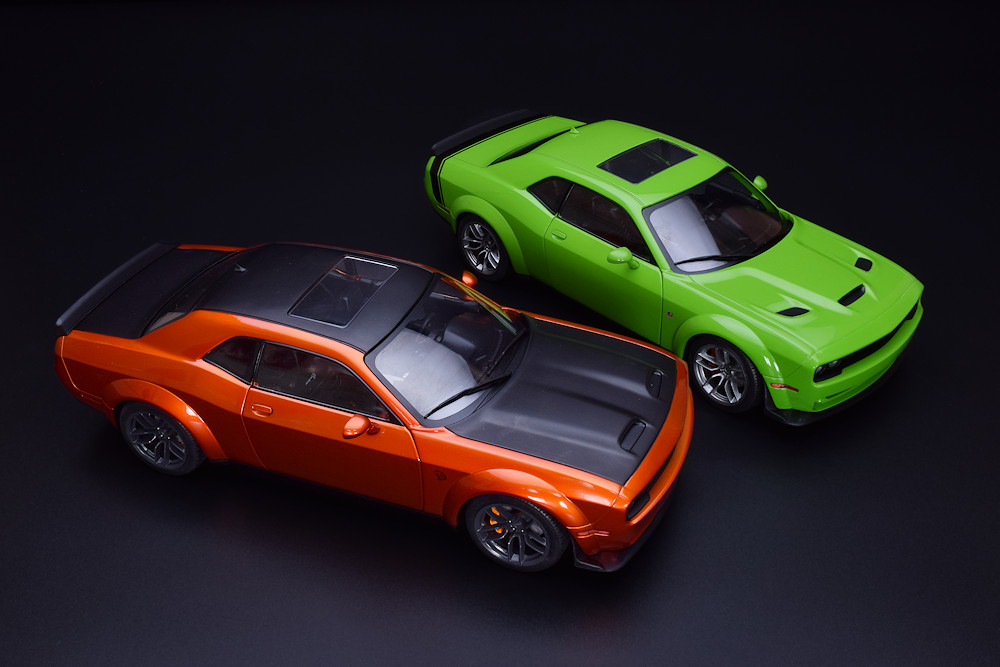 For around 80 Euros you get two decently replicated models. I can tolerate these models with only opening doors, although I would have preferred to at least see such a beast of Hemi-based motors lurking underneath. That said, I do have the very well-detailed HY61 2010 Challenger R/T & Challenger Concept cars, so in a way, I have my fix on fully opening Challengers and decided to pass on the “plastic-fantastic” AUTOart versions (Saving myself monies for other models). 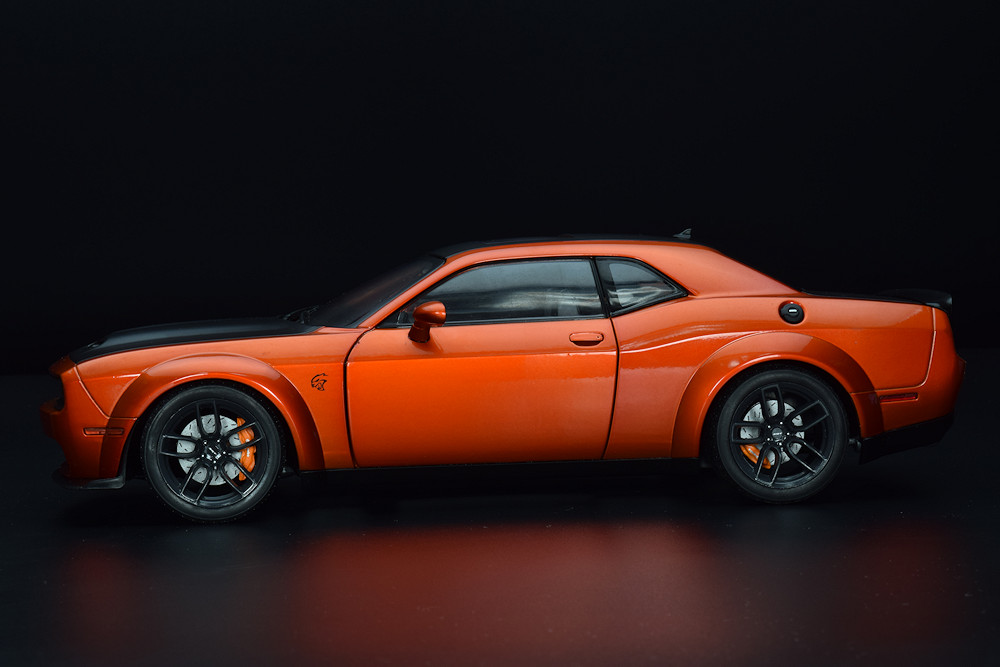 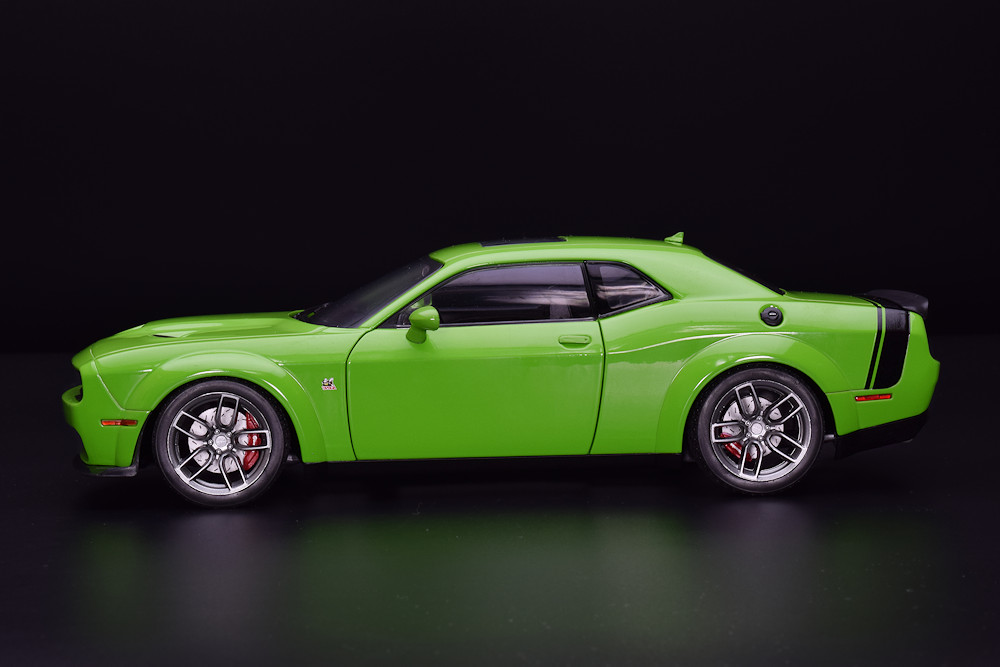 So, for me, I am happy with both of my Solido Challengers because they look accurately replicated exterior and interior-wise. Detailing could be better (A lot better with the horrid dashboard part-lines). The weight of each model feels nice and assuring in my hands. I do really like the tail light treatment done by Solido as well as their wheels with painted lug-nuts. Small details matter. The Hellcat has its logos on the front seat uppers. If someone buys one of these models and also has the spare time and the skills, the first thing that I would suggest doing is to revise the interior and add carpeting to elevate their model(s) a bit more. 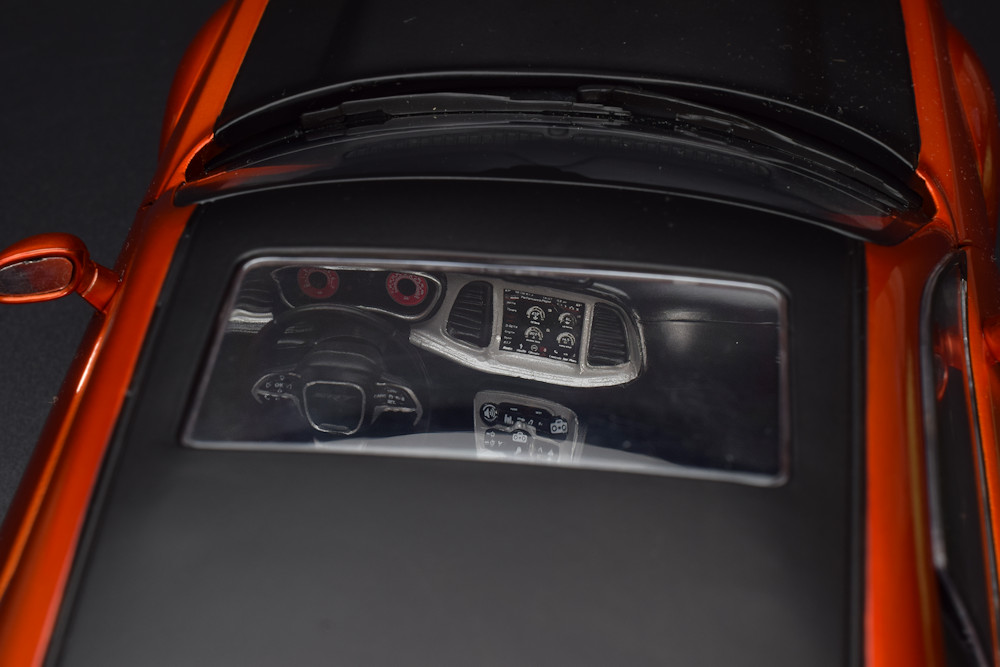 The most impressive part is, that Solido actually made two body castings, as each model has other hoods depending on their motors. I expect that a Demon will also be coming at some point, as these two models have proven to be really popular with all sorts of collectors. To be really honest, Solido could have just made an opening body shell for those two body tooling costs and just swooped their hoods depending on which motor was underneath. These models really convey an American feeling, even if produced by a French company in Bangladesh. I guess that we can say the same for the 1:1s now, as Stellanis is the new owner of FCA, so perfect timing for Solido to dive into their products. 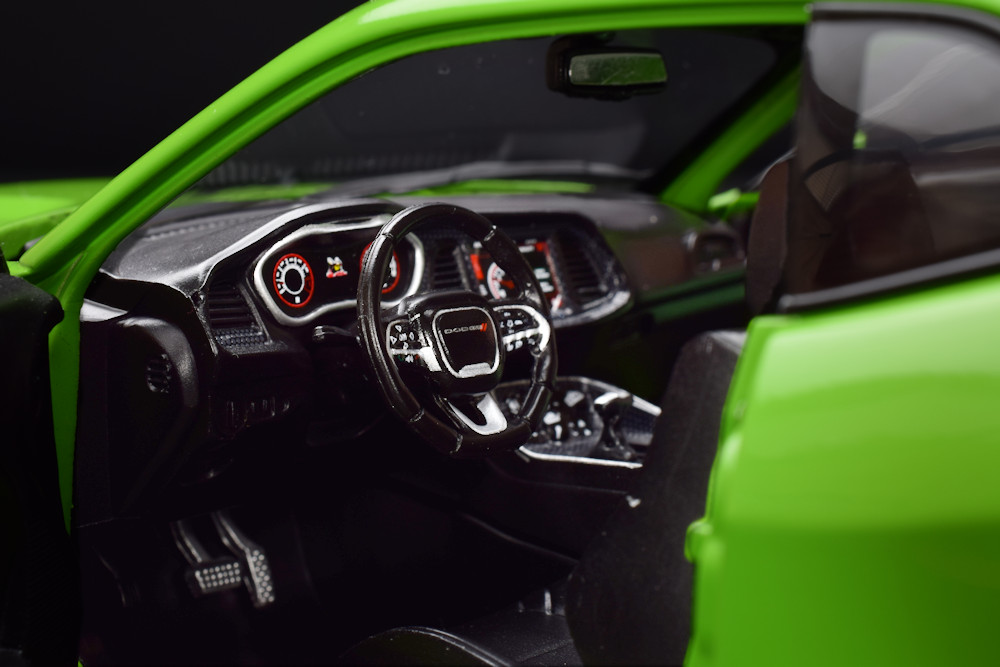 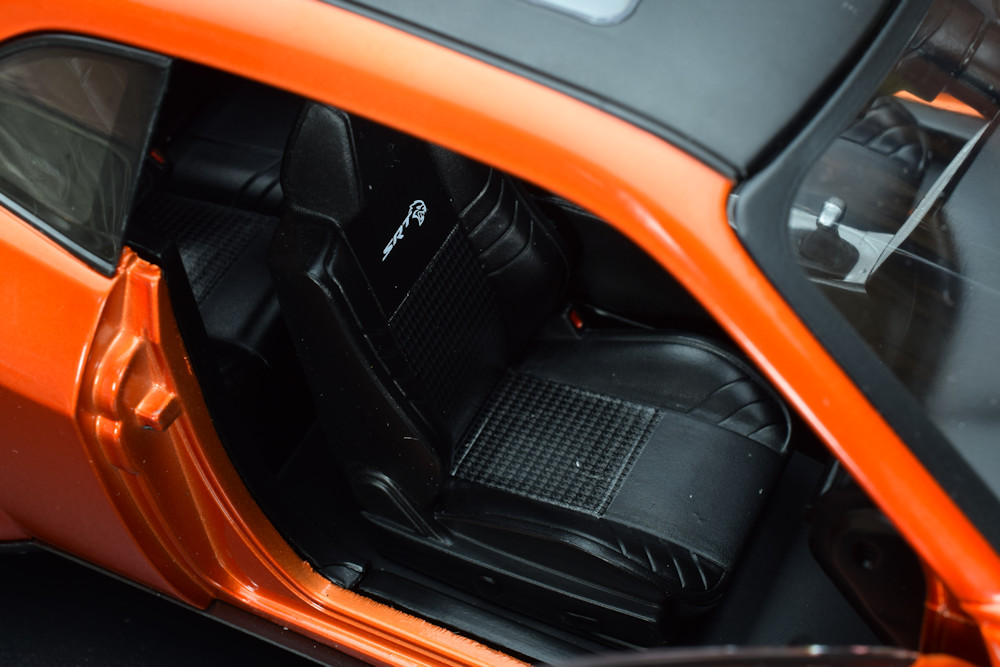 For me personally, I am impressed that Dodge could keep such an old design/platform current or relevant 11 years later… dare I say, even more, popular now than even back in 2010. That said, I wouldn’t mind my own 1:1 here in Europe, just to drive something different.  However, road taxes here will kill all of those hopes. So, 1:18th scale it is. 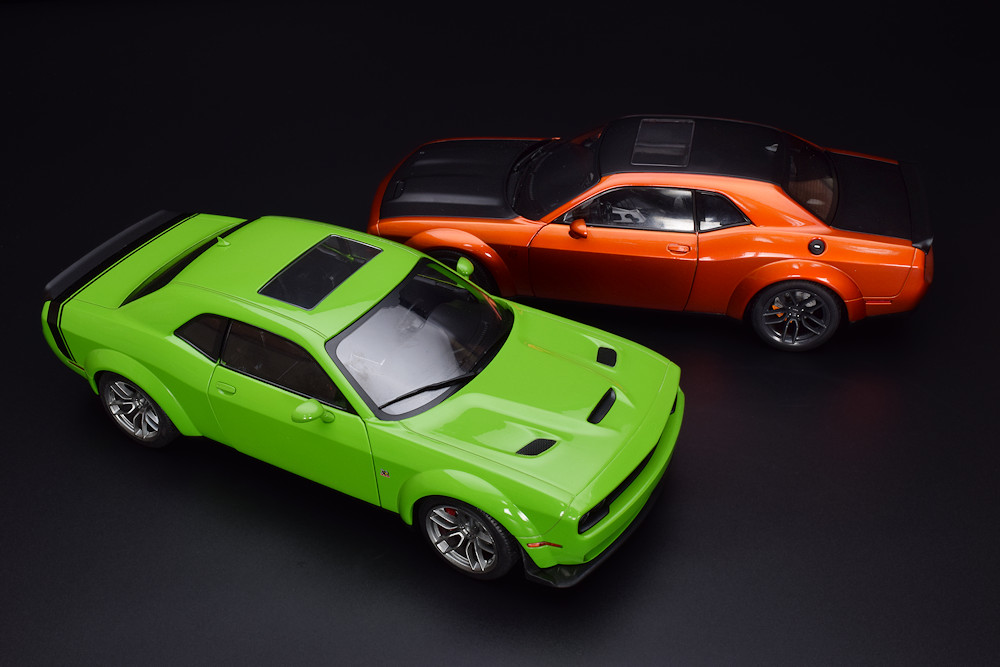 Okay, as I am an American and a real true car nut (beyond model cars), when I and a gaggle of my friends were younger, we had A LOT of fun with our cars, things that we wouldn’t dare do these days. In the mid to late 90s, we were mostly into the tuning scene and Gran Turismo video games when we could catch a break. With all of that came a tighter bond in our car meets and in general. 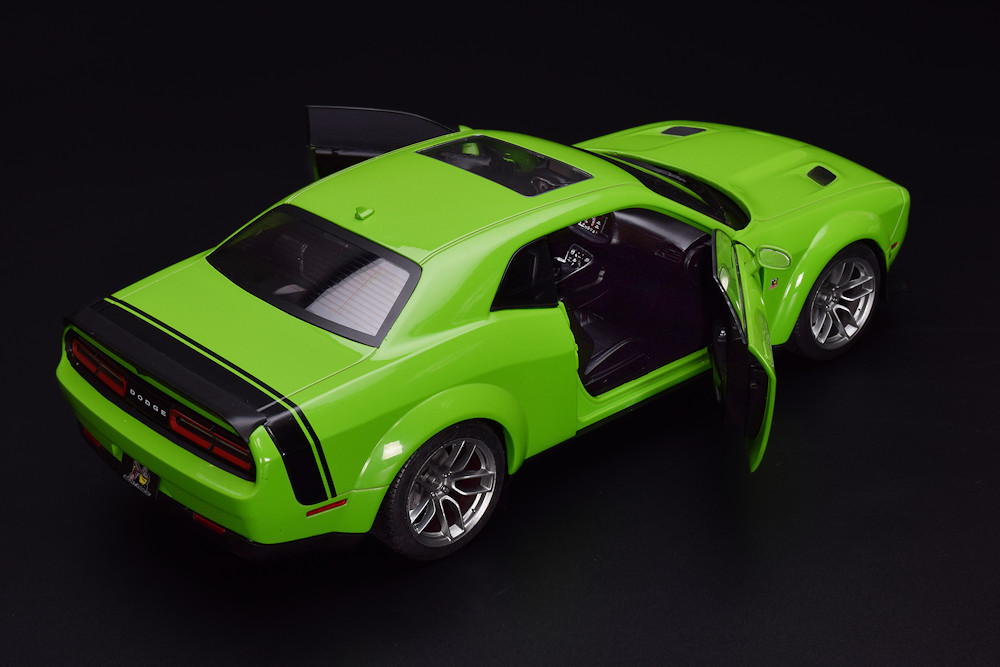 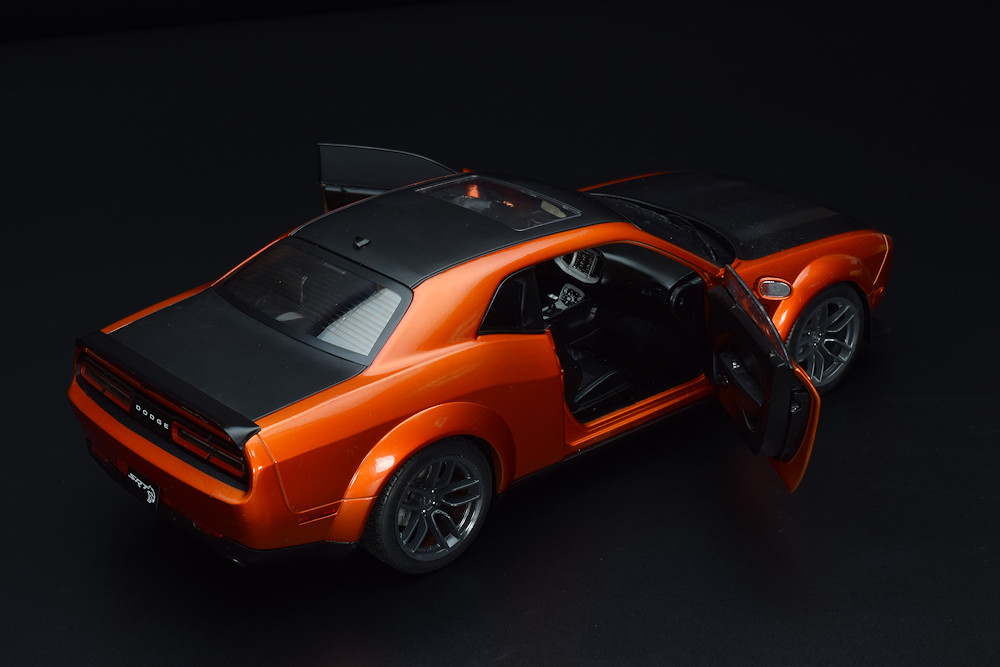 However, younger people these days take a bit more of a “Look at me” or slightly narcissistic approach for fun over public safety with “sideshows” or “takeovers” (When a few cars use public roadways or intersections by blocking them to do doughnuts). It’s really wild, with people “riding” the cars (hanging out of cars at their own risks) or daring to touch sliders while others stand filming the action. This form of automotive enthusiasm started in Oakland California way back (I literally noticed a Mustang in the background doing a doughnut in an early 90s Spice 1 music video). Now, I’m not going to knock doughnuts, I literally used to do them whenever I had the chance in my 240SX back in college…as well as sliding (Drifting, as taught to me in my own car by my good friend Brian). I loved doughnuts so much, that I and some friends got caught doing it, and instead of a ticket, the police officer asked me to show him how to do it in his Caprice patrol car (That was probably the coolest thing that police who wasn’t my personal friend ever asked me to do). However, when we used to do that sort of thing, it was very late at night and on empty streets. Never blocking people from proceeding with their lives, especially ambulances or other emergency vehicles.  However, if I were the same age these days, who knows which way I might have participated with my RWD car to get my jolly’s?  I’d like to think that I’d be a bit more considerate. 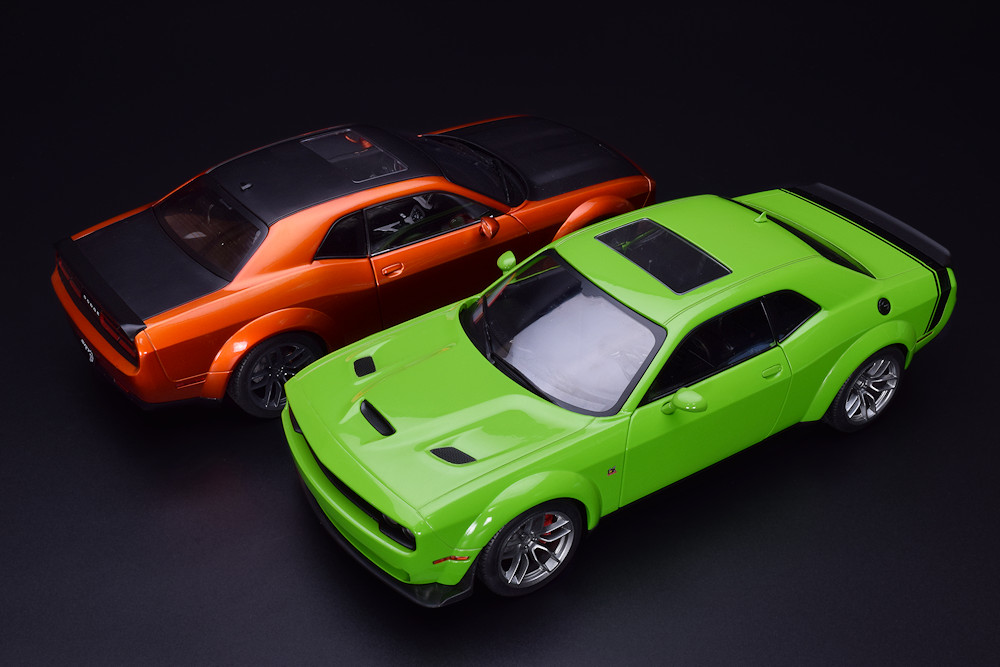 The reason that I brought up pseudo-relating to sideshows or takeovers is, that other than mainly Camaros, Mustangs, Cadillac Vs, Pontiacs G8s Nissan Zs, RWD Infinitis & Lexus’, I often see Challengers and Chargers on the scene in the numerous videos posted. So, just for a wee bit of fun, I made a few images of the perfect hooning rides doing their thing…  Sliding and Power braking before turning into some doughnuts.

For the prices offered, I recommend these Solidos to anyone (even if you have the HY61s or AAs), and to check out every over newer Solido release. You might find them a fun new budget brand, just as I have done.