The last Spark model I purchased was back in late 2017.  It was the dealer edition Porsche Mission E Concept.  A very nice model with a very expensive price tag.  But it was one of those models I had to have, one that I believe no other manufacturer will touch again in scale, well at least in 1:18 scale.  It checked two important concerns, it was a Porsche and concept car!  Two areas of scale model collecting I love.

A foreword, if you haven’t already read our earlier editorial called “Diecast isn’t the only medium that’s taken a step back…” I suggest you do.  It will provide more insight. 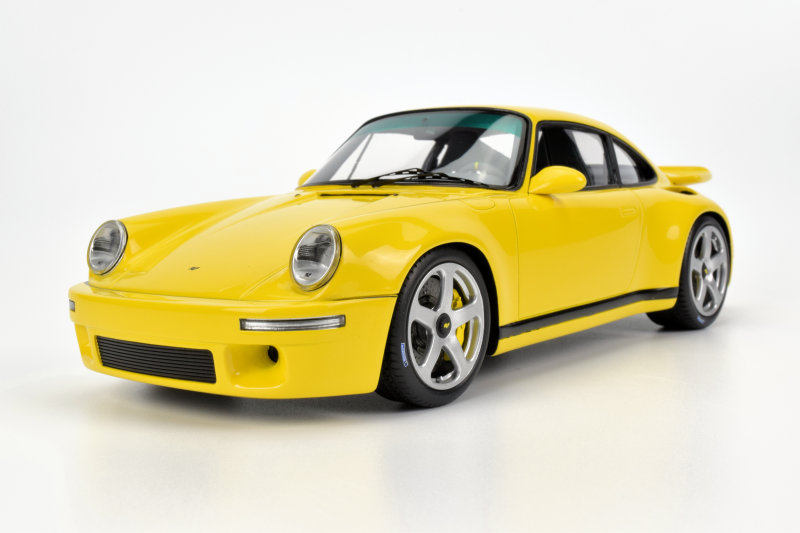 This is a Spark piece made of resin with sealed-body design.  The exterior skin may be that of 964 but underneath there is a lot of impressive modern tech.  The exterior does share some interesting tech as well, some of which include advanced taillight, front headlights with integrated angel hallos, flush body door handles and massive light-weight wheels to name some. 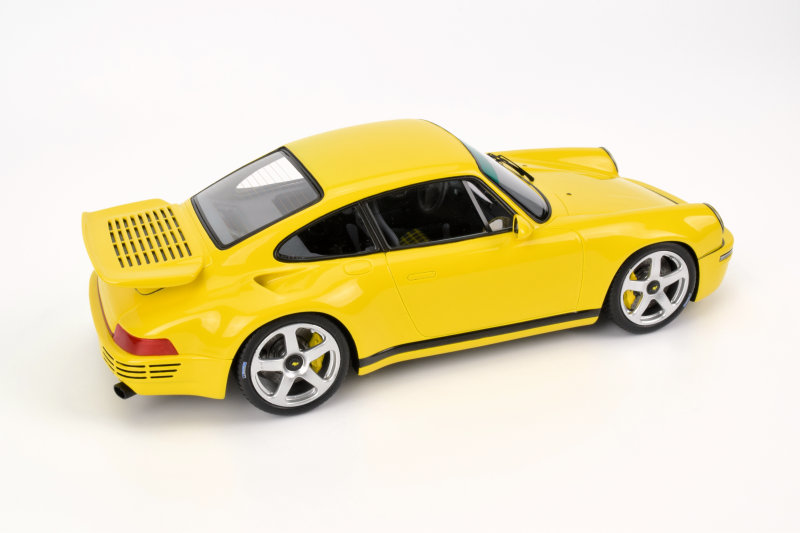 As for the paint, Spark does a terrific job.  The application is smooth and consistent throughout, with no defined flaws found within the Yellow exterior.  However, the front bumper Black transitional paint is a little inconsistent.  This is most evident in the left/right side of the bumper. 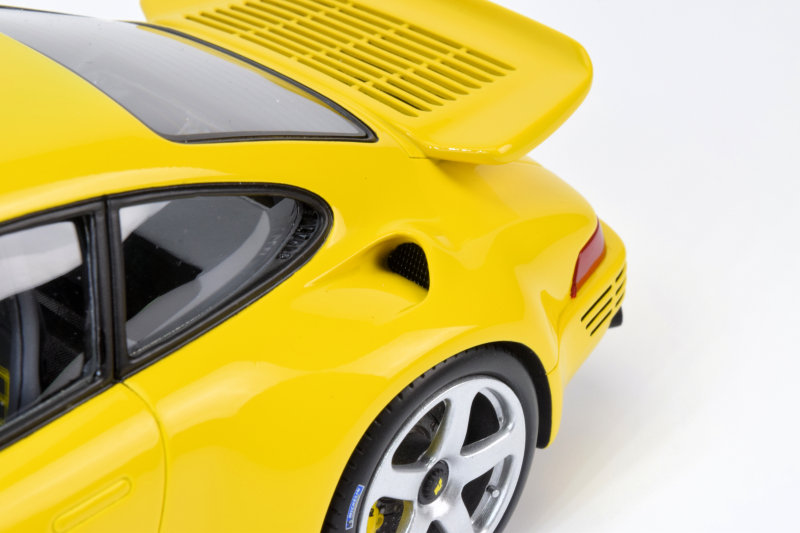 Overall Spark does a great job at executing the bodylines to mirror the original car.  One area that impressed is how they captured the curve in the glass with grille in the rear side windows.  Wiper blades are exceptional and extremely fragile to the touch.  Also, I love how they replicate the trim around the windows, more 3D like than other brands that carry out this detail with a flat painted surface.

On the flip side, the large side intakes are capped with solid plastic bits.  Also, the panel gaps are clear and defined, but they don’t live up to their earlier release of the CTR Yellowbird where they were painted in Black to show depth and definition. 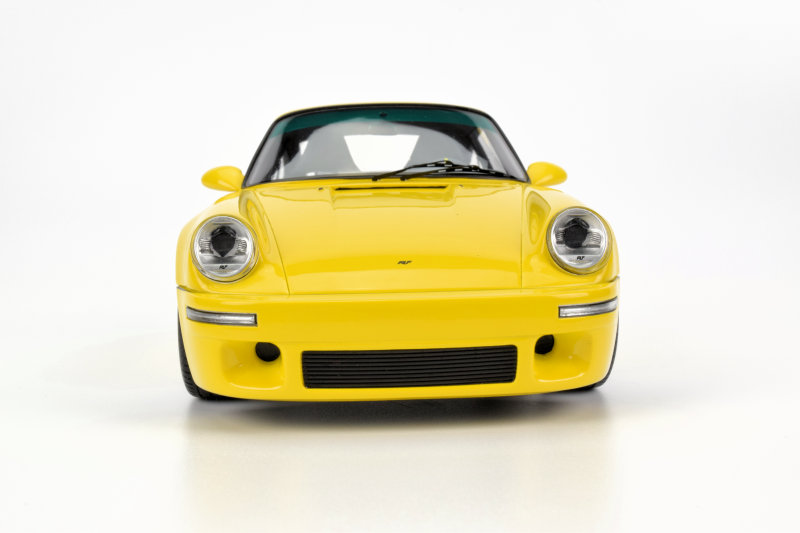 The front is lower grille is capped with a large solid plastic price.  Based on price, this should be perforated.  Again, the original Yellowbird wins here.  Headlights are mostly accurate, just the definition of the perimeter hallo light isn’t really defined.  Though I do like the RUF logo is found in the lower section.  Overall the execution of the front area is solid, typical Spark. 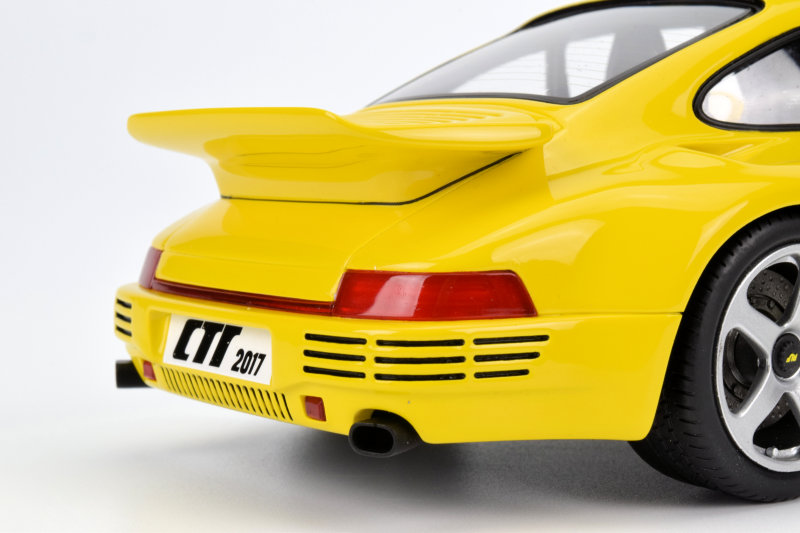 The rear is dominated by a large wing.  Spark does a great job of painting the individual cooling slots, the same with the slots found on the side and underneath the bumper.  This is a sealed model, so no access is provided to the motor.  The undercarriage presents hardly anything at all.  Simple exhaust/muffler and tips.  This is a 180 departure from the original Yellowbird release.  Whereas the original example is probably one of the best undersides we/I ever seen in sealed resin. 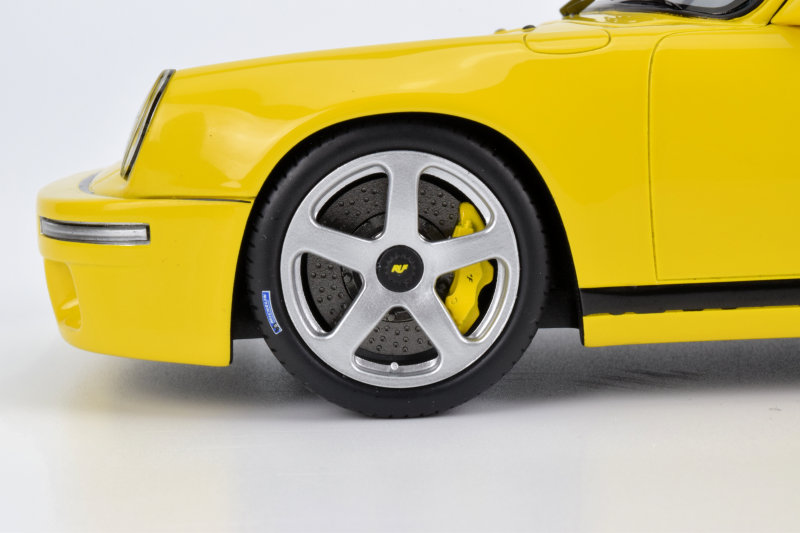 Wheels are massive 5 spoke runners.  Tires provide a Michelin decal.   Wheel paint is excellent and the centre Black single nut with the RUF logo is on point.  The braking apparatus consists of massive rotors and calipers.  The excellent definition on the calipers and rotors – rears also provide the small parking brake.

The 1:1 interior of the 911 RUF (964) CTR 2017 is crafted in a lush, velour like fabric. Spark completes their scale example in a slightly textured like grey material – mimicking the original would be nearing impossible and drive up the cost of the model considerably.  The dash and centre console are clean and to the point.  Fabric seat-belts are also in check.

What is somewhat lacking is their definition of the carbon fibre elements, Spark has used a moulded type as opposed to a decal sheet.  This looks a bit crude and unpolished.  At this price, it should be better. 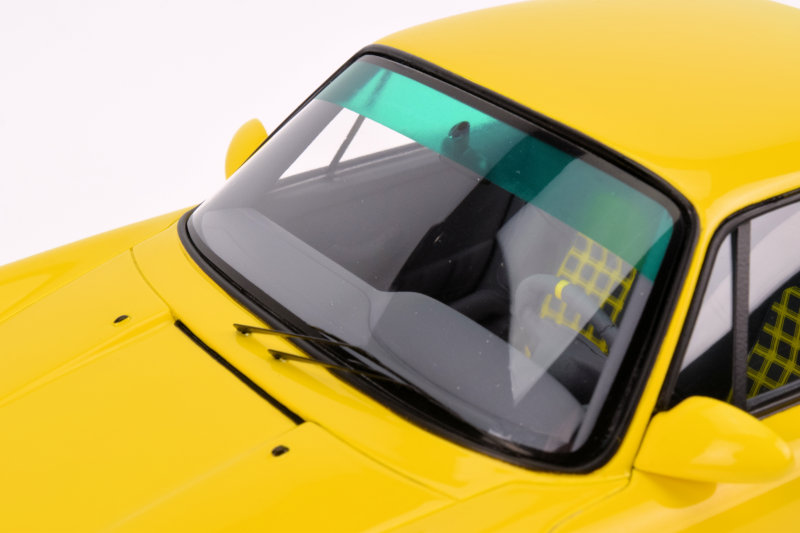 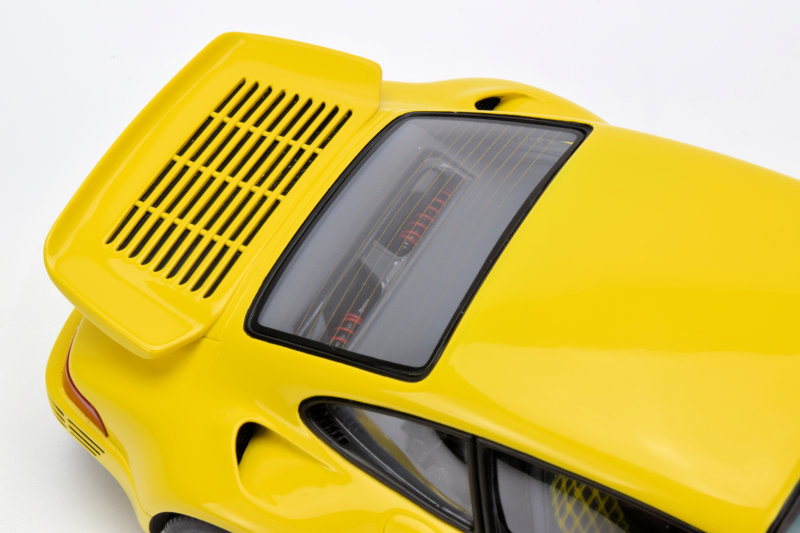 What can I say, overall I love Spark’s rendition of the 911 RUF (964) CTR 2017.  The exterior lines are very good the paint is exceptional too.  I just wish the little things as pointed out above were done as well or better than their original Yellowbird release from the team.  The price for the 2017 car is more, however, what we receive is less.  This just doesn’t compute. 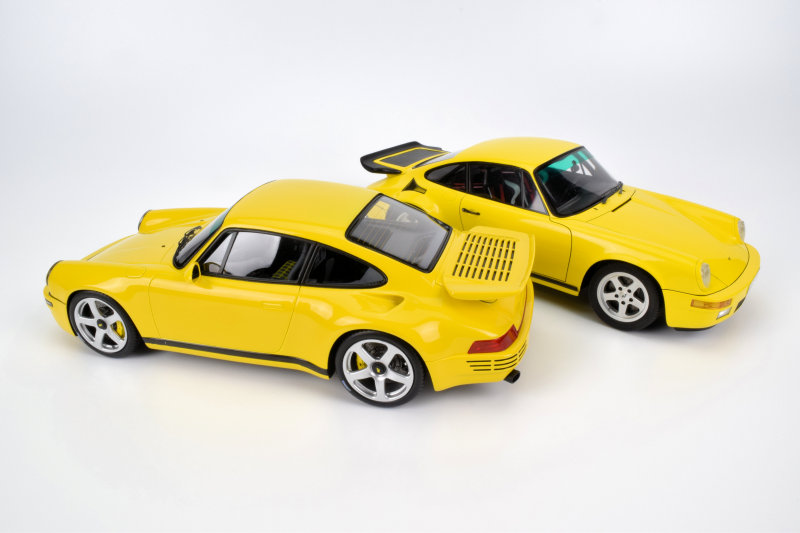 As far as recommendation I say yes, the model will be a welcomed addition to those hardcore Porsche fans that just need to extend further into the tuner assortment.  The model is far from a pile of poo it just doesn’t meet the next level execution as its predecessor did in scale.  They should/could have done better, the proof is in the available photos from both models.  I’m not sure if the same applies to their race/livery assortment, as I’ve stopped collecting them many years back.  Hopefully, someone can provide some perspective.  Enjoy the pics!