Words and photos courtesy of mcaf123

Porsche announced the 991 generation of the 911 GT3 RS at the Geneva Motor Show in 2015. Compared with the lesser GT3, there are now louvres above the front wheels and Turbo-like intakes fore of the rears, rather than an intake below the rear wing. The roof is made from magnesium. The interior includes full bucket seats (based on the carbon seats of the 918 Spyder), carbon-fibre inserts, lightweight door handles and the Club Sport Package as standard which comprises of a bolted-on roll cage behind the front seats, preparation for a battery master switch, and a six-point safety harness for the driver and fire extinguisher with mounting bracket. 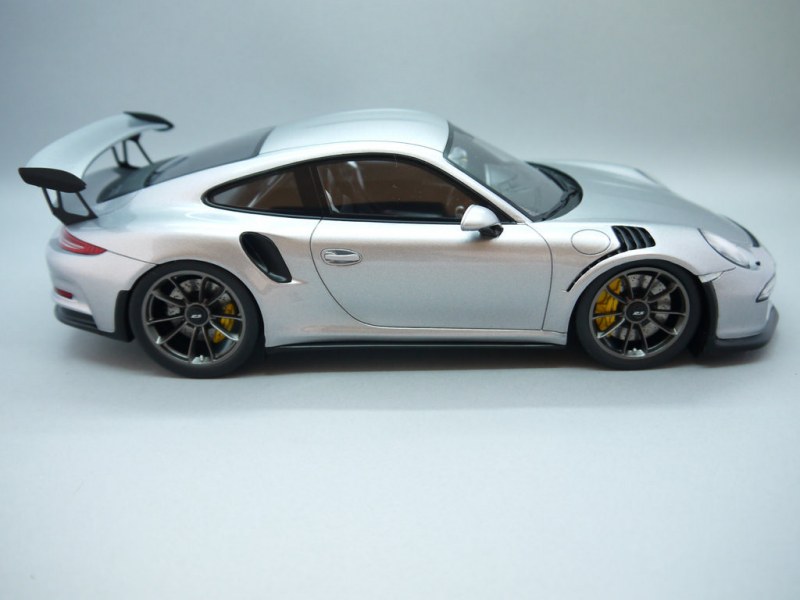 Gone is the 3.8 litre unit of the GT3, with a 4.0 litre unit in its place. Pumping out 500bhp at a screaming 8,250rpm and a max torque of 460Nm, it comes as no surprise that this 1,420kg road muncher can do the 0-62mph sprint in just 3.3 seconds and onto a top speed of 193mph! This car only comes with the PDK transmission, which I’m sure some purists out there lament.

The 1:18 Porsche 911 (991) GT3 RS by Spark first burst onto the scene as a Porsche Exclusive dealer edition model, with such stand out colours as Ultraviolet and Birch Green amongst others. These are easily trading hands for £400+, so I was glad to get my hands on this Silver one for a more palatable £120. There was a lot of hype surrounding this model and consequently it shot up to almost double its initial listing price with the likes of CK Modelcars. So does this model live up to that hype or is it all for nothing? Let’s find out shall we… 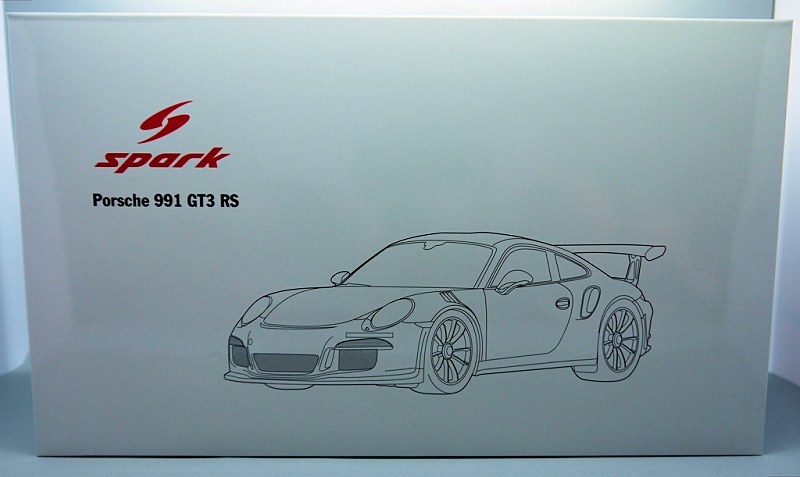 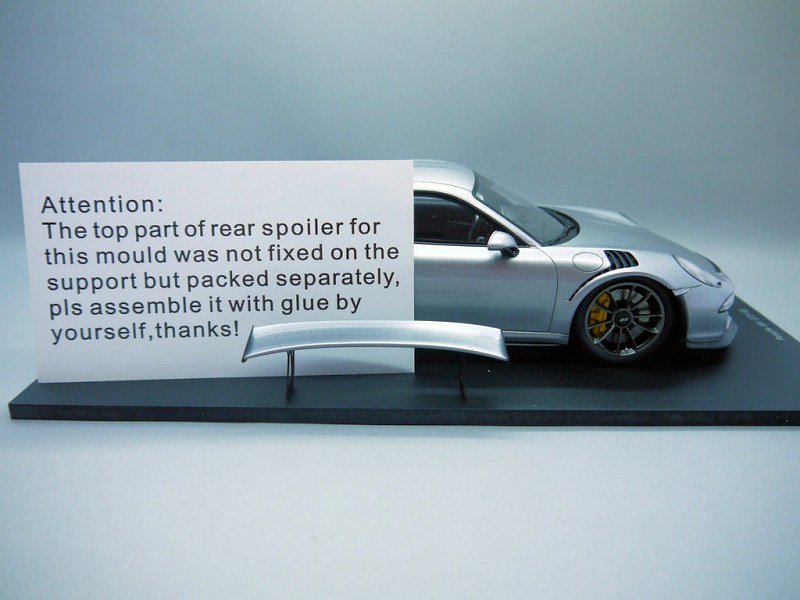 Starting with the box, the model comes in a nice grey box with minimalist design – each side shows a different angle of the car in blueprint form in detail. Inside you’ll find the model inside a polystyrene clam-shell with the separate rear wing in a protective plastic case in a slot on the top half of the clam-shell. This model is very well protected in transit for sure. Adding to that level of protection is a layer of fairly thick foam to dampen any movement from the model whilst it is attached to it’s base inside the clam-shell. Spark provides a large note of warning to let you know that you should glue the rear wing in place – for the purpose of this review I have just placed it in the grooves and I don’t think anyone really needs to glue it in place as it fits very snugly with no movement anyway.

This is such an aggressive looking car with that massive rear wing, low ride height and big wheels. However, I really don’t think this fairly bland and maybe even a bit dull silver paint job does the car any favours (the silver AutoArt 911 GT2 RS I have at least has the carbon bonnet to add a bit of pizazz). This needs the shouty colours that Porsche reserved exclusively for the dealer editions. In that vain, anyone who doesn’t fancy shelling out those ridiculous prices will do well to wait for the upcoming GT Spirit version – hopefully they overcome their recent QC issues and produce a fine looking model in crazy colours, because they will certainly sell like hot cakes to the average collector. 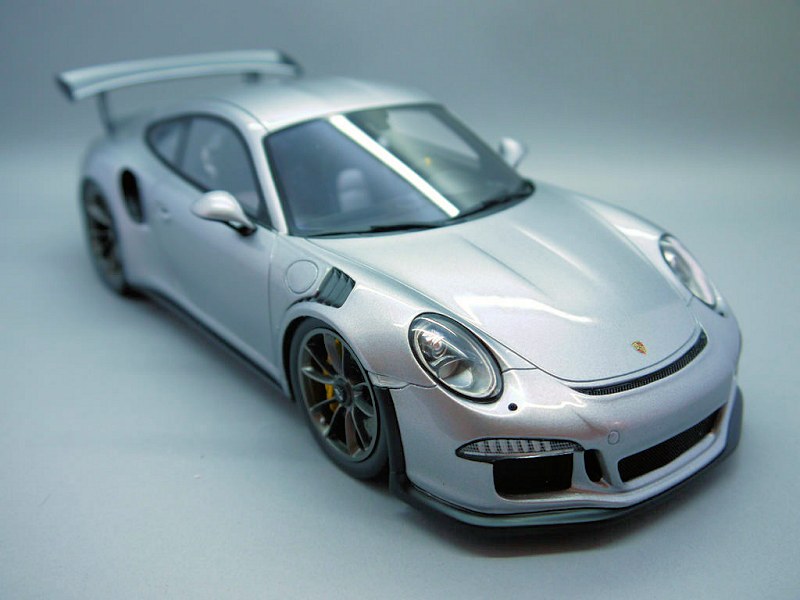 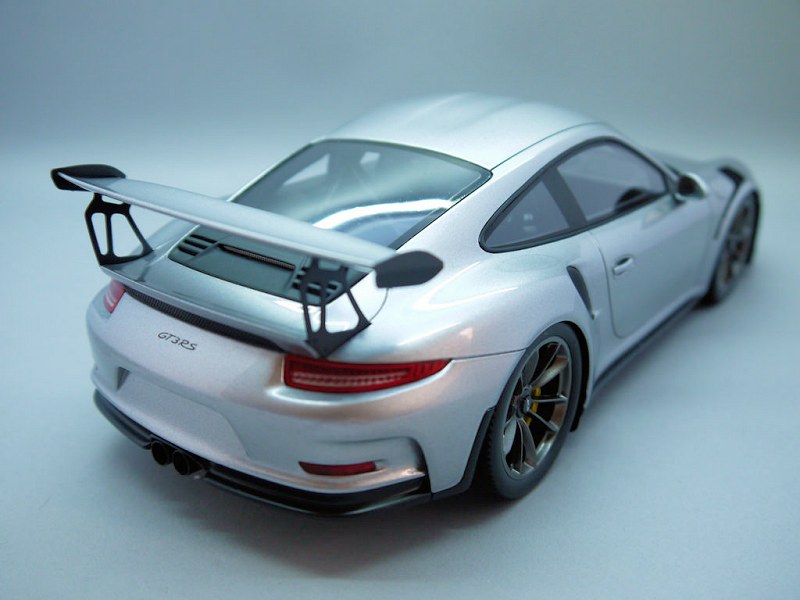 The Porsche and GT3 RS badges both look good and are centred correctly. The almost Zagato-like double bubble roof looks awesome as well! 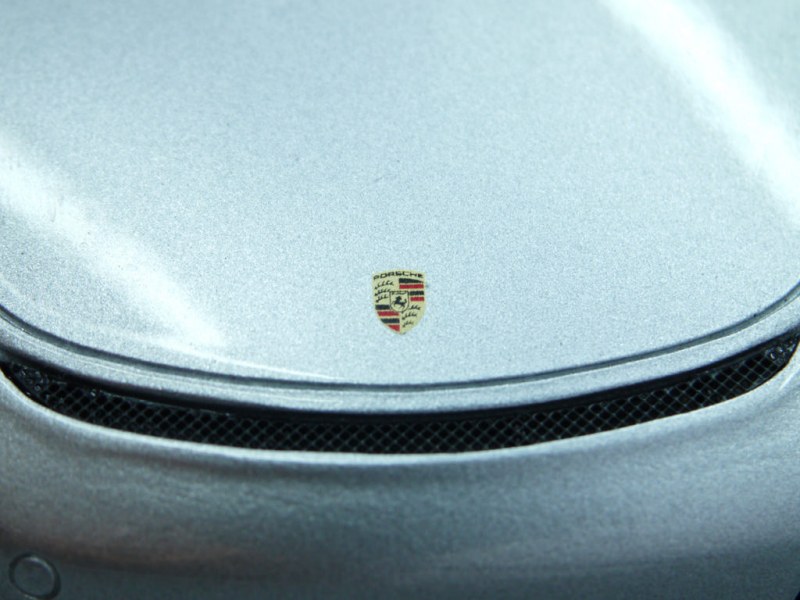 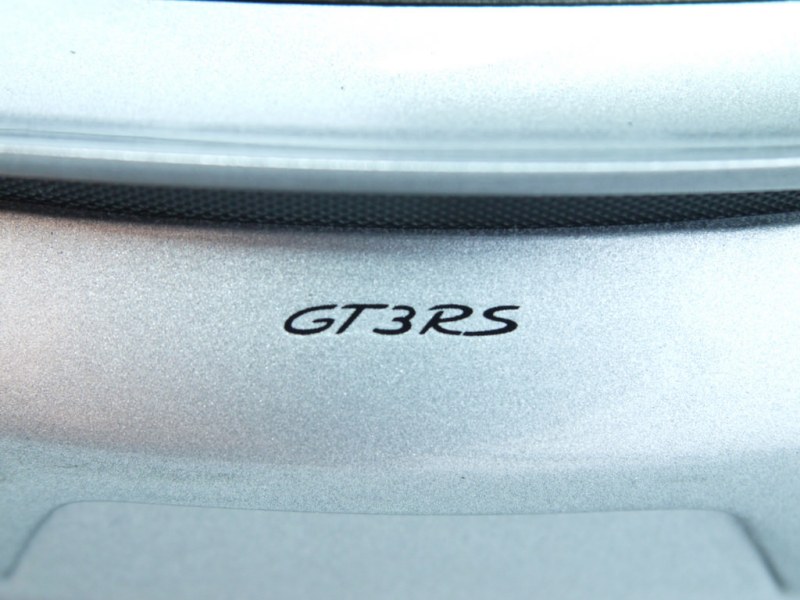 The louvres above the front wheels are absolutely menacing and are cut into the body well. If I’m going to be picky, the sections where they meet the body could’ve been done just a little bit neater. There is mesh buried within, but is quite difficult to make it out. The rear intakes are nothing to shout about and one of mine was finished poorly inside with a big blob of paint present. The finishing around the edges where the black meets the silver is a bit sloppy as well. 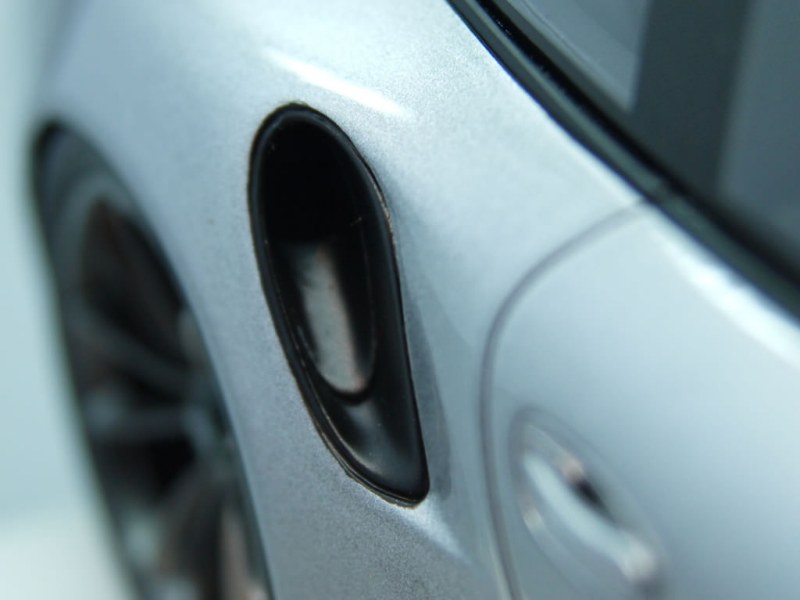 The beast of a rear wing is really easy to slot down into the grooves either side of the ducktail spoiler. I found the paint finish on the underside of the plastic wing to be somewhat lacking, but once in place you’d be hard pressed to notice any issue, but the wing supports look ace. The faint Porsche logo above the third brake light is subtly done. 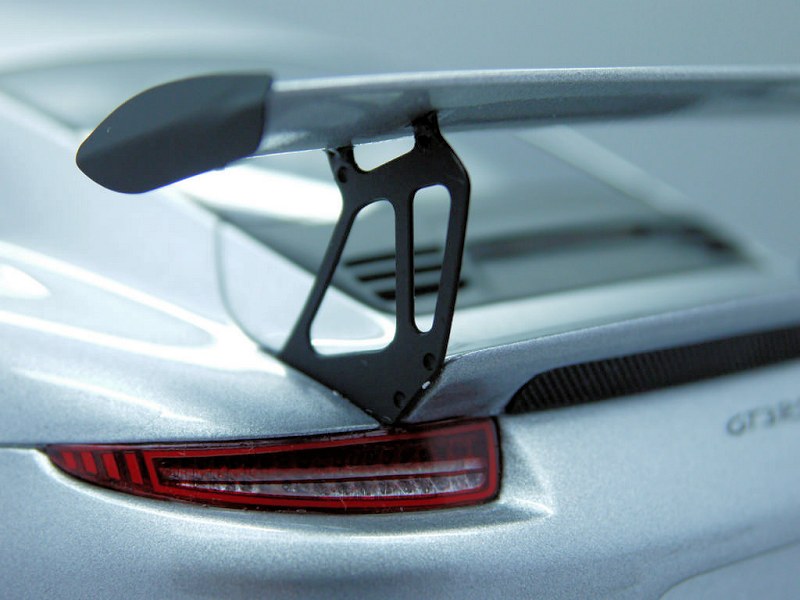 Onto the lights now and I was a bit dissapointed in the front ones to be honest. Even after cleaning them for these pictures, they just weren’t showing up nicely and then I realised that the insides of the of the lenses are poorly finished and not clear of blemishes at all! Looking at pictures of the real car, it seems Spark forgot the bottom bulbs? The rear lights look fine to me with a nice level of detail to the LEDs. 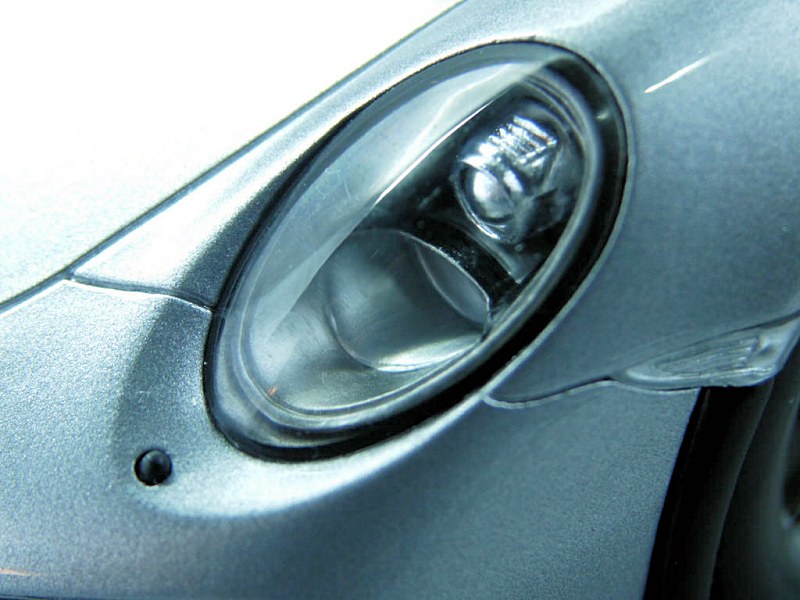 Looking at the wheels, I keep getting this niggling feeling that they’re set ever so slightly too far into the wheel arches – is it just me? The detail on the wheels themselves is really nice. Lovely paint job on the yellow calipers with the Porsche lettering and an air valve as well. Sadly no lettering on the tires, but the RS badge is well placed on the race inspired locking wheel nut. 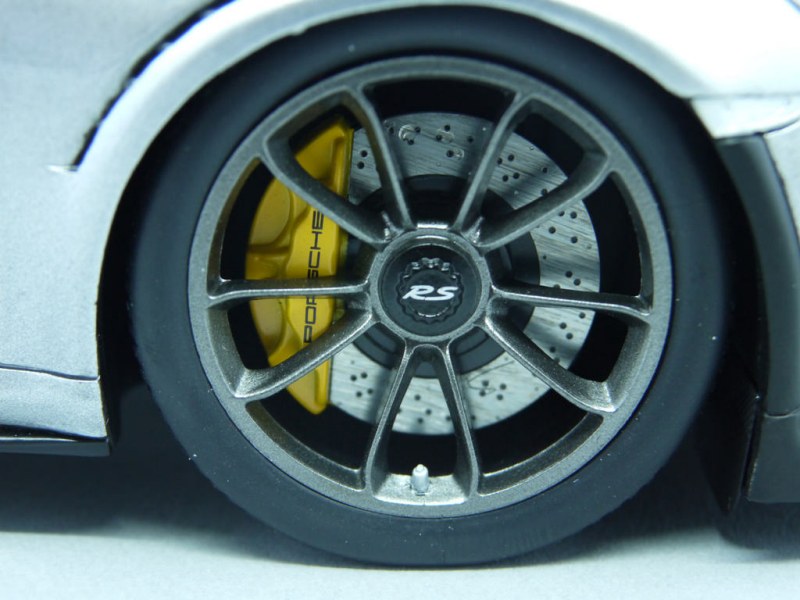 I found the interior detail to be hit and miss. Fronti-Art, with their Avanstyle Nissan GT-R NISMO I recently reviewed absolutely nailed the interior and should serve as an example to all. The GT3 RS graphic on the central screen is a nice touch, but just look at the white blocks for buttons on the dash – Spark made almost no effort here and the sticker wasn’t even placed fully flat. Big big shame. On the redeeming side, the seats and seat-belts are pretty good and you’ll also notice the attempt at white contrast stitching around the cabin. The yellow centre stripe on the steering wheel adds a much needed splash of colour to the otherwise bland dash area, but a shame that the black finish on the airbag area is coming away. Because of the way the instrument binnacle cowls at such an angle, it is difficult to see the speedometer etc., but they are present and correct. 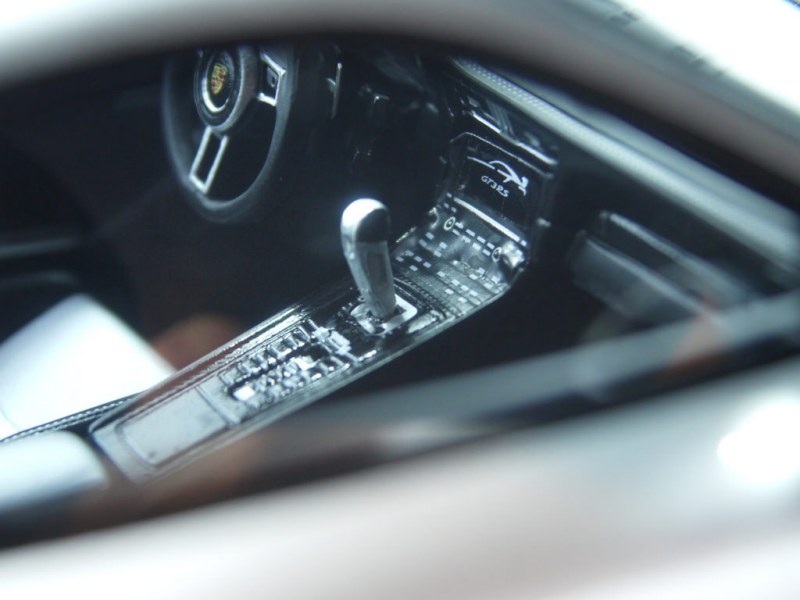 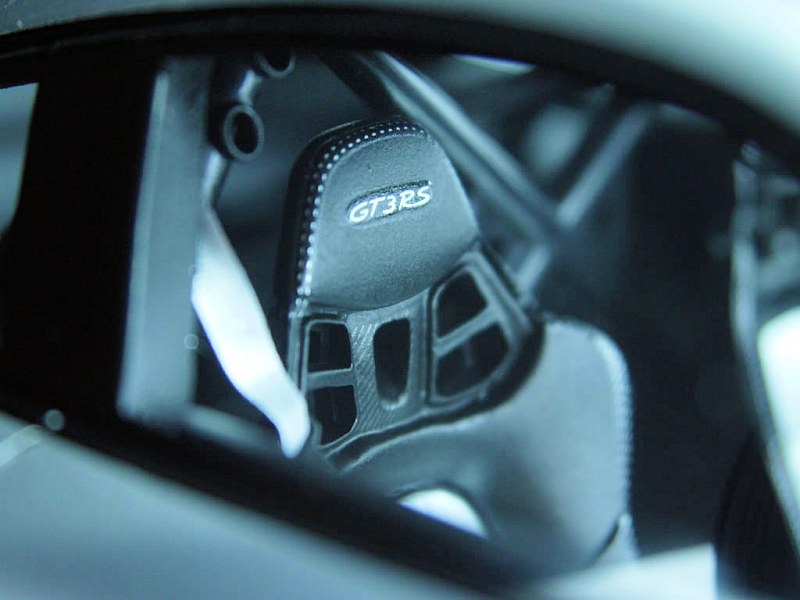 The roll cage is another of those features that let’s you know the track biased intentions of this car and you also get to see the carbon-backed sports seats from the 918 Spyder in this view. There is also a pair of GT3 RS logos behind the seats and beneath the roll cage. 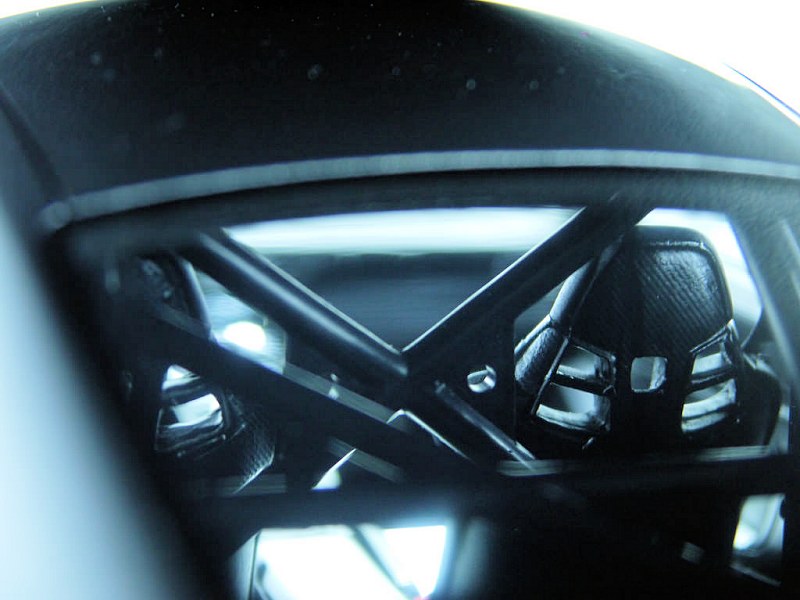 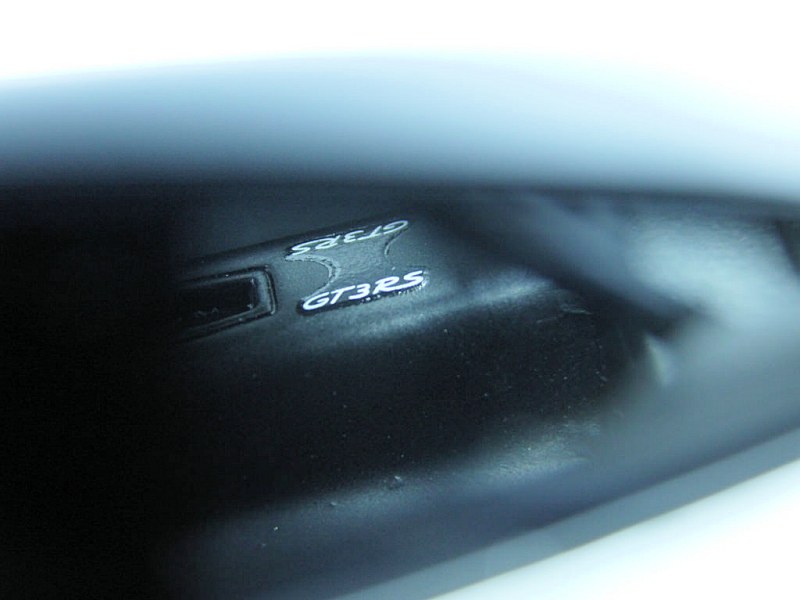 So what are my overall thoughts on this model? People probably won’t like hearing this, but after all the hype surrounding this model and particularly the dealer exclusive colours, I’m left feeling a bit meh. It just doesn’t excite me the way I thought it would. In real life this is an absolute beast of a machine, but I think this colour turns it into one that just blends into the background and you’ll probably forget it is there after a while. As a good friend of mine put it to me, “I get the feeling that it would be at it’s best in it’s own display case on the top shelf of someone’s office and it gets glanced at every so often” – and you know what, I’m inclined to agree.

I should also point out that my model arrived with very poor QC issues – wheels were all loose and when you turned them the brake discs and calipers turned with them so I had to adjust them with a fine tool to get the pictures correct. I will be sending it back for a refund and waiting to see what GT Spirit comes out with. In my humble opinion, this is a model that really needs an outrageous colour and for that I envy those that got the dealer exclusives…  just not the price they paid! 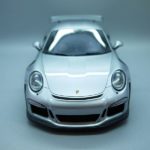 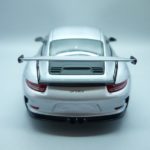 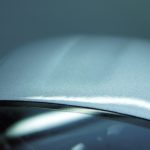 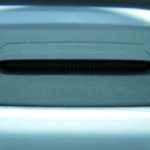 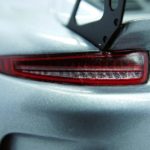 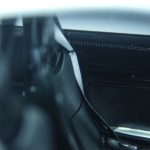 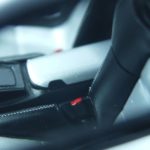 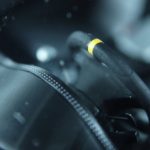 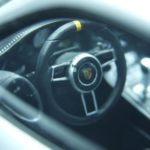 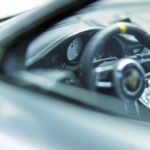