I truly believe we there is an automobile that represents each individual, one that is visceral, it is you, a symbol of yourself in metal, plastic and gasoline.  The impression is long-lasting, timeless if you may.  My appetite is the Porsche 911 RUF CTR.  It just represents what I believe every car should be: bold, edgy, technical and raw!  Still to this day, just the memory of the video of the Nuremberg hot lap still delivers all the incredible rush of emotions.

The model here is one of the latest efforts from Spark in 1:18 scale, the Porsche 911 RUF CTR 1987 “Yellowbird” production car.  Spark was the first to release the pre-production example in the mid-2000’s with the odd re-release of the same throughout the years.  The example here is completely new, and it is only fitting we present a perspective of both within this review.  If you like a more in-depth look at the pre-production effort, please review the article “Diecast isn’t the only medium that’s taken a step back…”. 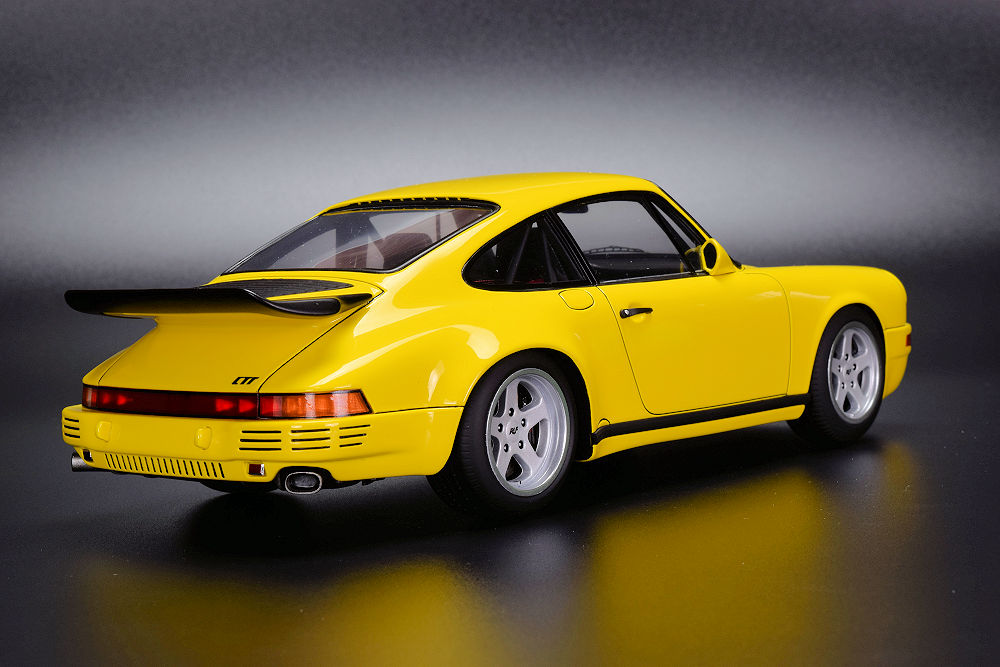 Out of the box, one would think the pre and production car are one of the same, for the most part, they are.  There are a few notable differences in the production car, one, the absence of intercooler intake ducts on the rear fenders – for technical reasons it was found they did more harm than good.  Later models also had additional slots added to the rear bumper to compensate for the cooling effort. Second, the production car also features two exterior mirrors as opposed to one. 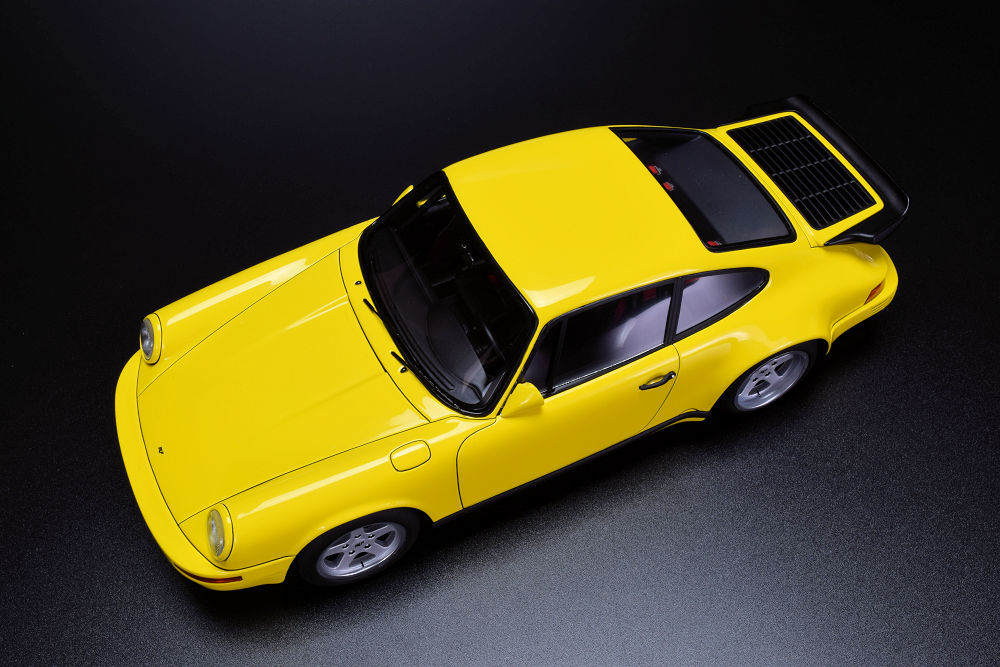 Paint is exceptional on our example, we found no glaring issues.  As the model is made in resin with a sealed body the shutlines are panel gaps are near perfect.  However, Spark does go a little further than opening price point resin manufacturers.  They provide some Black shadowing to enhance the overall look.  It works! 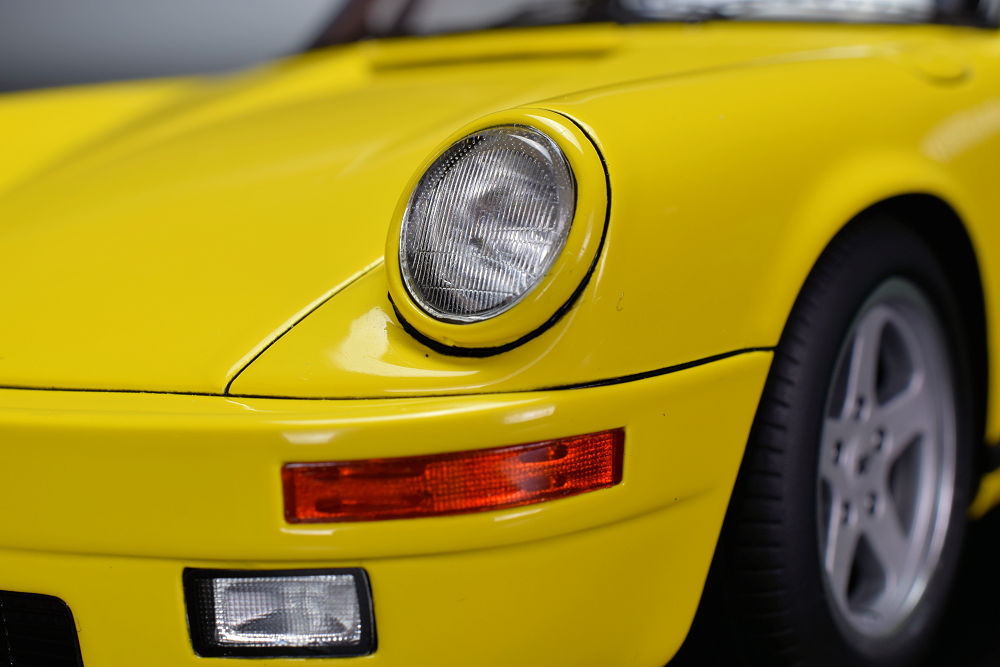 More on the shadow effect…  There are some differences between pre-production and production release.  First off the production car does show the shadowing effect around the front headlights, the initial Spark release does not.  Also, the side access point (suspension bits/in front of rear wheels) typical of the Porsche of the era is defined too.  This is absent from the pre-production model. 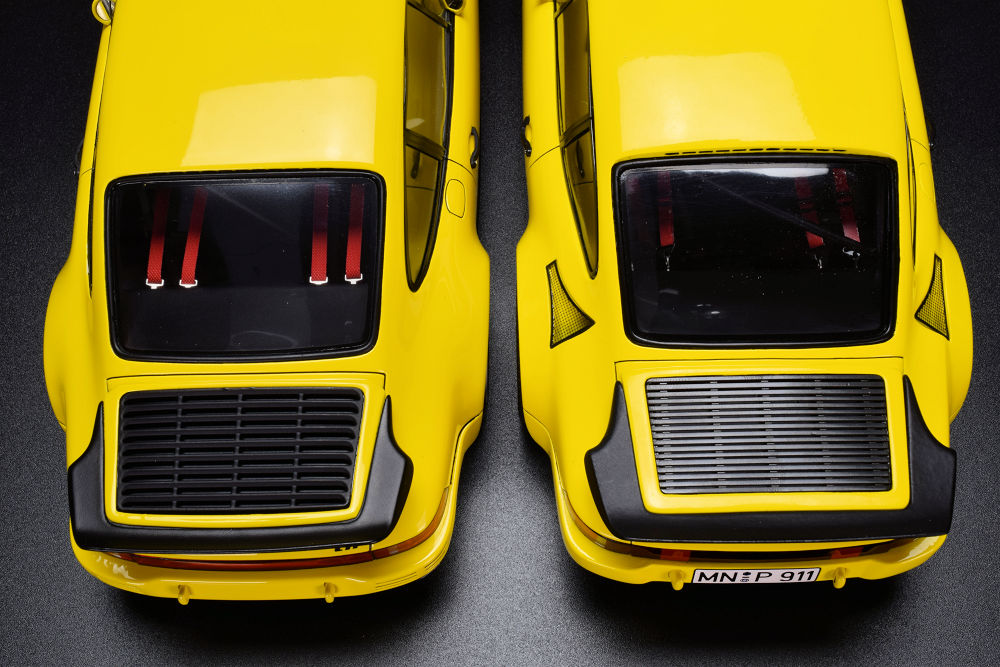 As for the overall shape of the two models, the effort for both is extremely similar.  One notable departure is the back end of the upper roofline, the venting is far better defined on the pre-production car.  Not sure if this was a Spark oversight.  You can observe this within the image above. 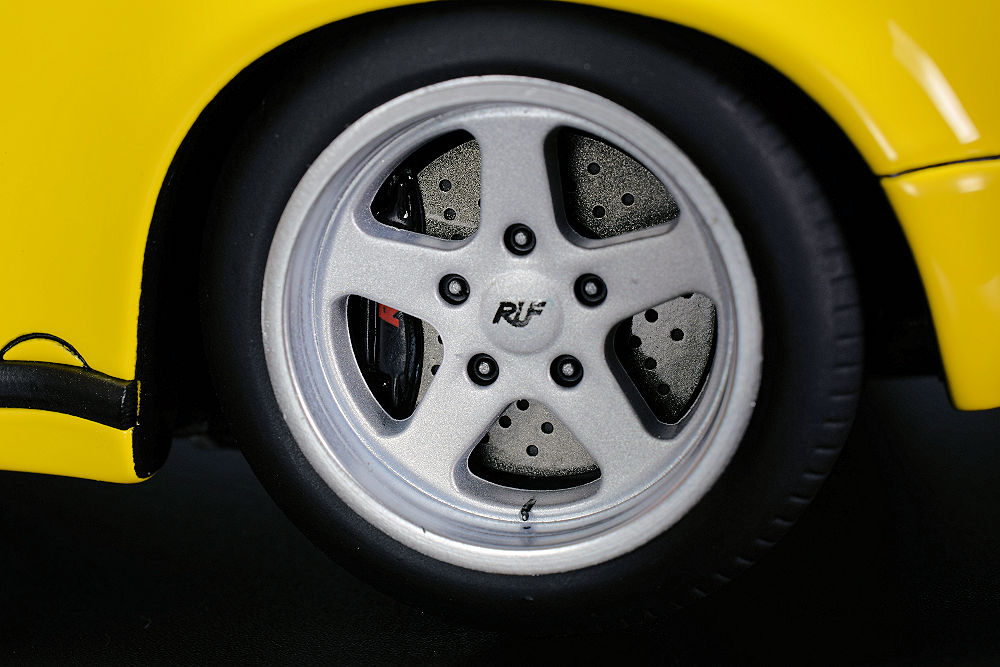 Wheels are unquestionably more accurate and polished on the production replica than the initial release. I can’t believe how large the rear tire are on the pre-production piece.  A world of difference between the two.  However, the pre-production does excel slightly with adequate tire script, which is not present on the latest effort. 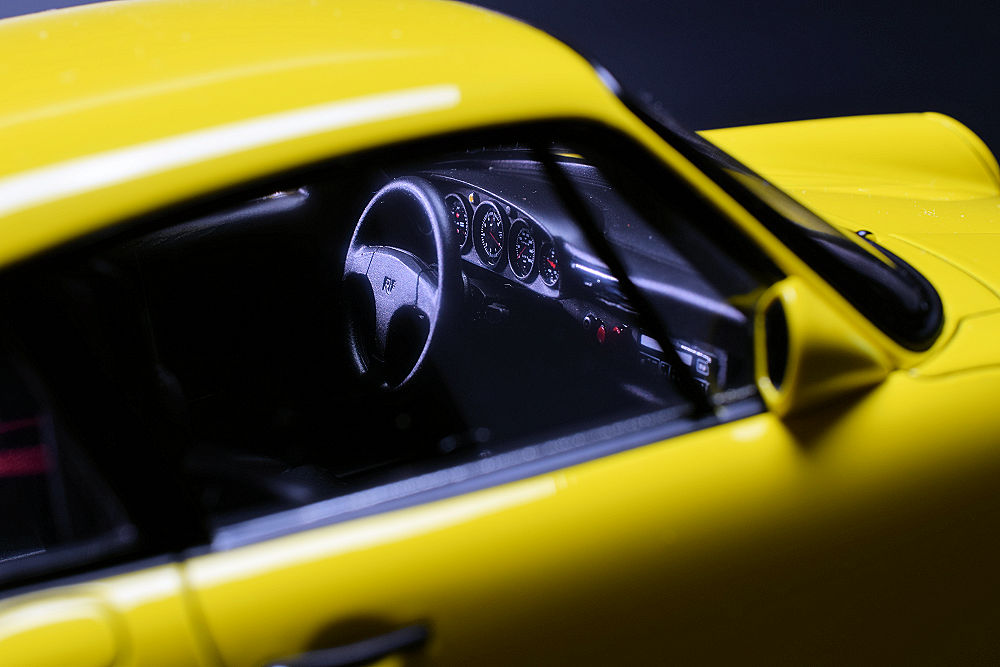 The interiors are basically the same, precise details do create a refined example but the original release did shine a little more.  Why?  The interior does feature flocking on the floor and mounting points for the seatbelt harness are thoroughly defined.  There is also a difference between the roll cage connection points among the two models.  I don’t have all the data to confidently say which is more accurate. 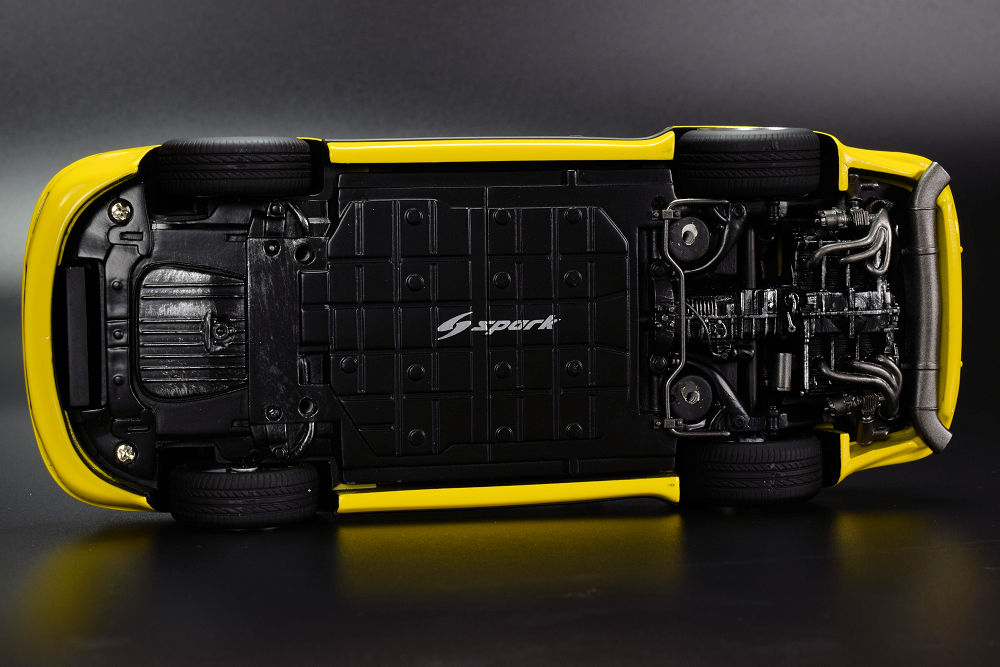 The undercarriage is huge departure from traditional or lower price point resin/sealed manufacturers.  Maybe the best I and the team here at DS has seen in quite some time.  The production car is on par with its older brother, one small distinction between the two, the pre-production car shock absorbers are painted Yellow.  The production replica is re-created in Black.  Still kudos to Spark for some impressive work.  Whereas other brands usually overlook the undercarriage on a whole. 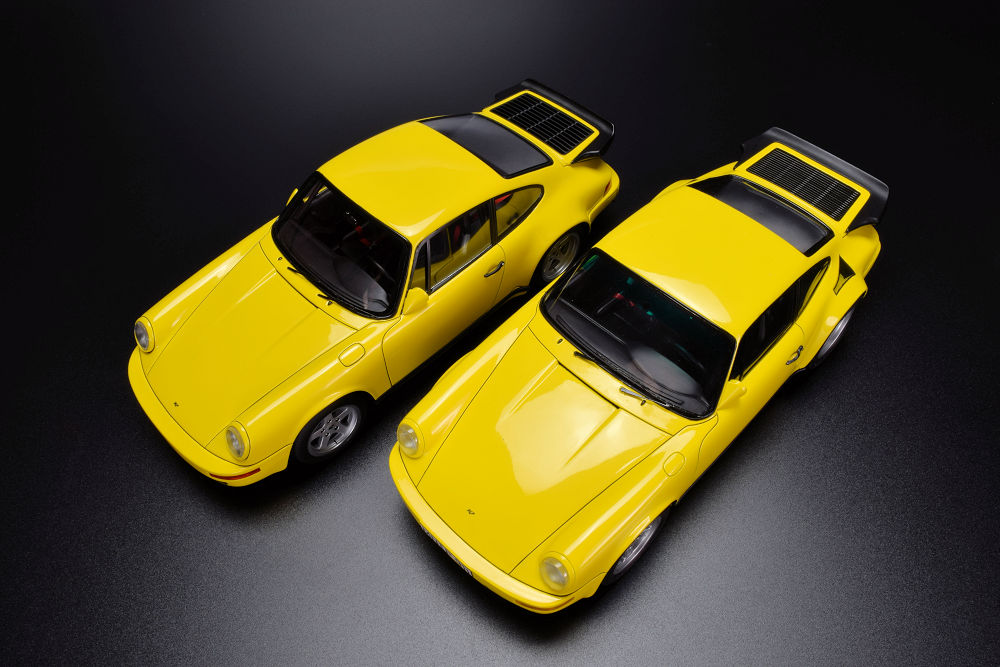 I understand for some this is just another model, and rightly so.  And for others, it provides the same interest and passion I have for Porsche and Ruf CTR.  As for the effort from Spark, it receives two thumbs up.  It definitely isn’t perfection, but what model is?  Some areas are more refined than the previous replica while other were not. The balance is still maintained and Spark does a definitive job exposing why their price point at times exceeds the immediate competition.  In the end we all vote with our wallets. I did!  There are zero regrets.  Enjoy the pics!