Yo, what´s up, homies? We´ll be checkin´ out this bad-ass super-sick Evo 9 today! So don´t go anywhere!

Ok, that sort of language may befit the model on review today but doesn´t sound like my usual self. Neither does the subject matter fit my collection theme. Asian cars hardly make an entry into my garage and are the true exotics in a collection of exotic cars. I´ve got CSM´s EVO X only via my interest in British Police motors where they replaced Subaru Imprezas of the Humberside Road Crime Unit giving criminals on wheels a hard time. I never felt tempted by the Evo IX, although they served in the same role in other constabularies. Neither did I ever feel tempted by previous renditions of it in scale, including AA and Super A´s own stock and Ralliart versions. Nor do I usually feel attracted by the tuning car scene and I would not touch the relevant Jadas or sealed One Model with a barge pole. Consequently, there will be many amongst our readers who will be able to notice things on this model that I am simply too ignorant for, as much as I am trying my best to do my homework on this one.  So please do share your better knowledge down below in the comments. 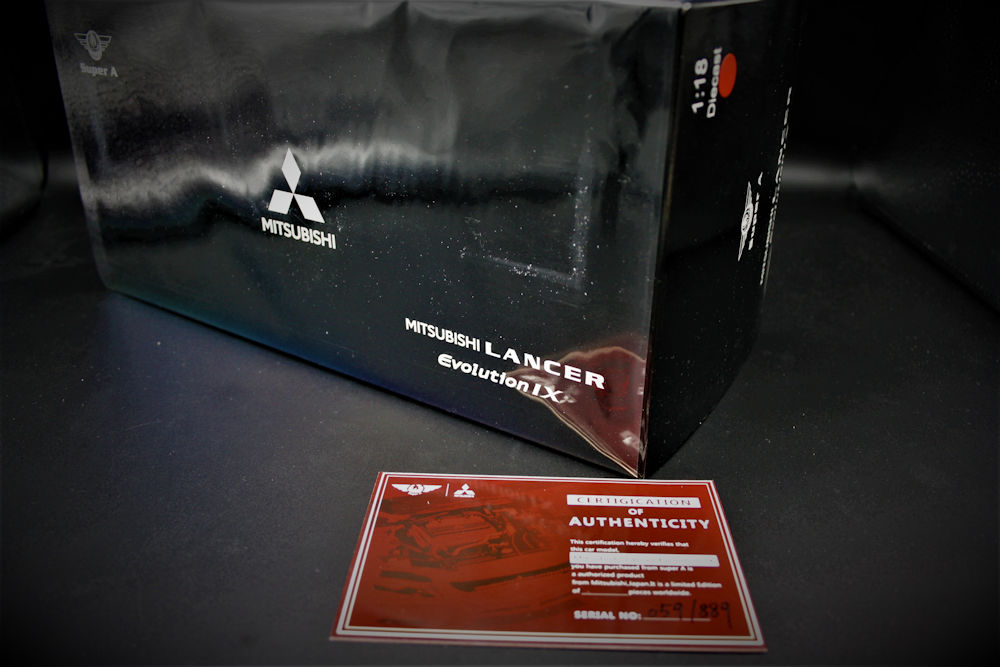 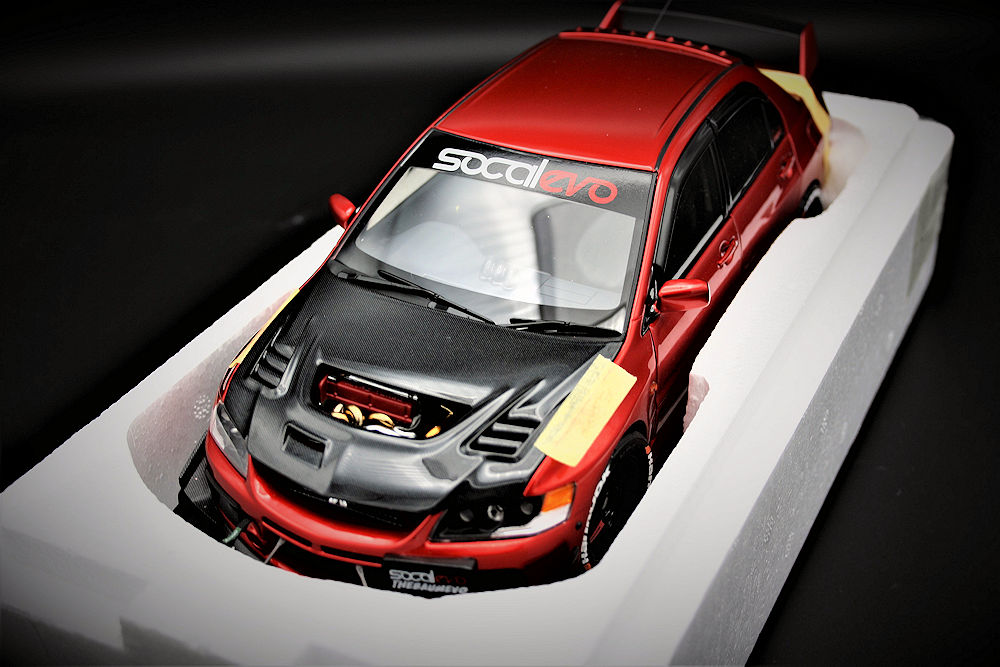 As this our first review of a Super A model, a couple of words on the packaging: It comes in a black outer cardboard box with all the usual print and a red dot sticker to mark it as the red version, protectively wrapped in a transparent cellophane sleeve. Inside the model is screwed down by three screws to the bottom of the usual styrofoam shell. Whether the yellow tape that holds the boot shut and straps the rear diffuser fast to the bottom – and failed to keep the hood shut, is the retailer´s addition or the manufacturers’ precaution is unknown. That both these measures are necessary is revealed by a few sad discoveries: I found tiny red paint flakes, a rear diffuser loose on the right (with some paint missing where it stuck and the photo-etched centre mesh knocked out of the hood, but luckily not missing, but discovered in the engine bay and glued back into place. The other paint flakes were missing where the loose bonnet banged onto the engine bay (see photos). A “Certigication of Authenticity” (whatever that is) strangely “verifies” that this here is a Super A model authorized by Mitsubishi and # 059/889, while I remember that production of each colour was announced to be limited to 555 and 666 pieces respectively. Err, well?! 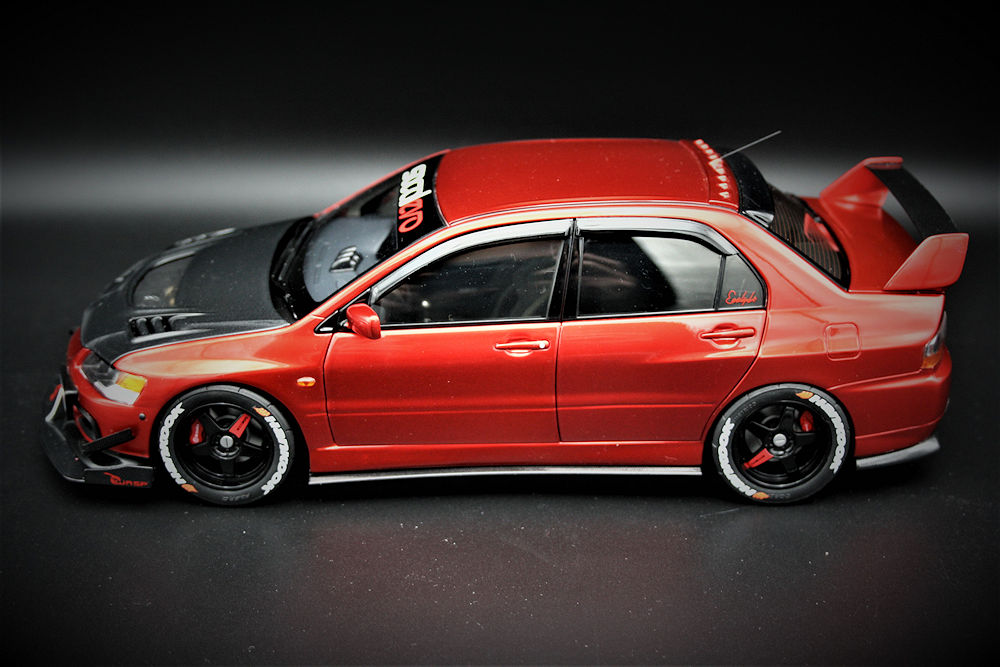 As an exception, this model of a heavily modified Mitsubishi Lancer Evolution IX doesn´t fail to amaze car lovers outside the Fast and Furious Tokyo drift scene and does not look out of place near a Pagani. Part of the attraction is that this remains a road car. It may be heavily modified, but not to extremes that would make it appear like a track toy or cease to be road legal … in its setting (the tinted driver´s door and passenger side windows would be illegal where I live). And that very clearly is … Southern California, unless membership to the SoCalEvo (Southern California Lancer Evolution Enthusiast Club) is spread beyond state or even national borders. A car like this would not be plausible without showing some sort of club membership windscreen banner. The US-made WASP Composites (company has ceased to exist) front splitter, nicely executed in a fine carbon fibre weave, is a very American choice to give an Evo downforce, too. It also includes a textile recovery loop. Actually, you might even allocate this to a particular owner: The licence plate does not only say SoCalEvo but TheBaumEvo which is the name under which a guy named Chris Baumgartner is publishing souped-up Asian motors (and fashionable Sneakers) across different social media. Google yields pictures of a likely archetype in 1:1 tagged “TheBaumEvo” that is close enough to Super A´s black version to assume that the model is based on this car, albeit the real one seems to be grey, not black, the SoCalEvo script slightly different and Baumgartner´s ride clearly a Californian road-legal left-hand-drive instead of Super A´s true-to-Japanese-origin right-hand-drive. Why Super A made this change when their own previous Evo 9- releases all were LHD, is quite a bit of a mystery. It´s clear enough to see, though, where Super A arguably got their inspiration. And they took this inspiration even further from the reality of existing Evo-mods into making my red version a Lancer Evolution Enthusiast´s wet dream. 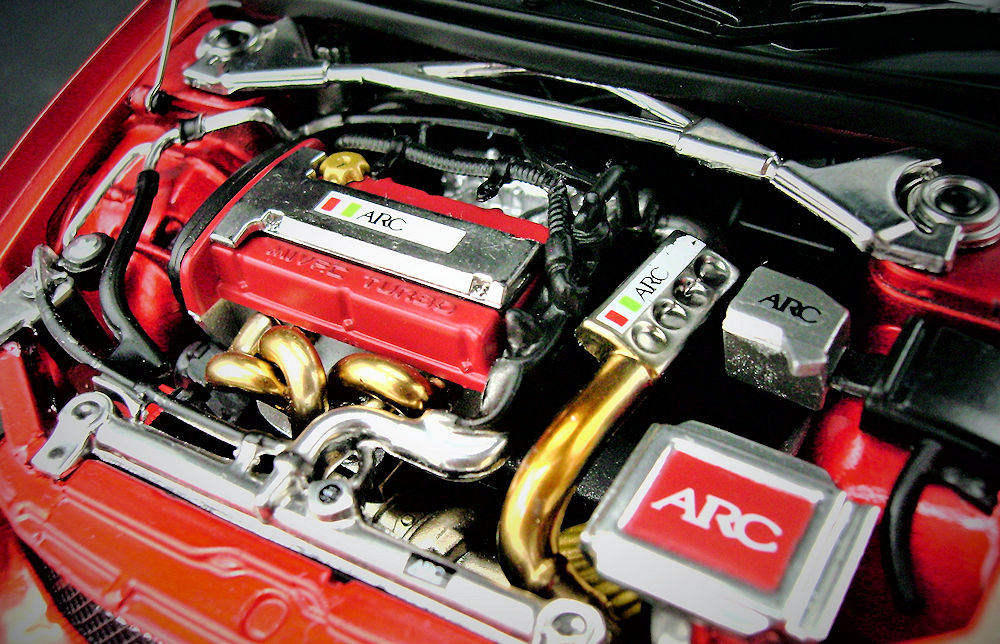 Even if it is, nicely contrasting with the smoothly applied rich dark red metallic paint  (unfortunately flaking off in some spots), in which the Evo was never sold originally by Mitsubishi, the finely patterned, shiny carbon fibre parts and hood pop (better than, say, AUTOart´s Lambo Centenario, BBR Giulia or LCD Huayra ­– no kidding!). And literally speaking, the hood does so even better than the old AUTOart Evos: The hinge-work and prop-rod are absolutely state of the art and reveal the beauty of an engine underneath the hood. This motor has clearly been souped-up performance-wise and Super A has enthusiastically replicated a Super Induction box, spark plug cover, titan intake pipe and manifold by ARC.  Some of it can be seen with the hood closed through the fine mesh in the hood and grille section. Great! Clearly a model for enthusiasts of high-performance engine detail. 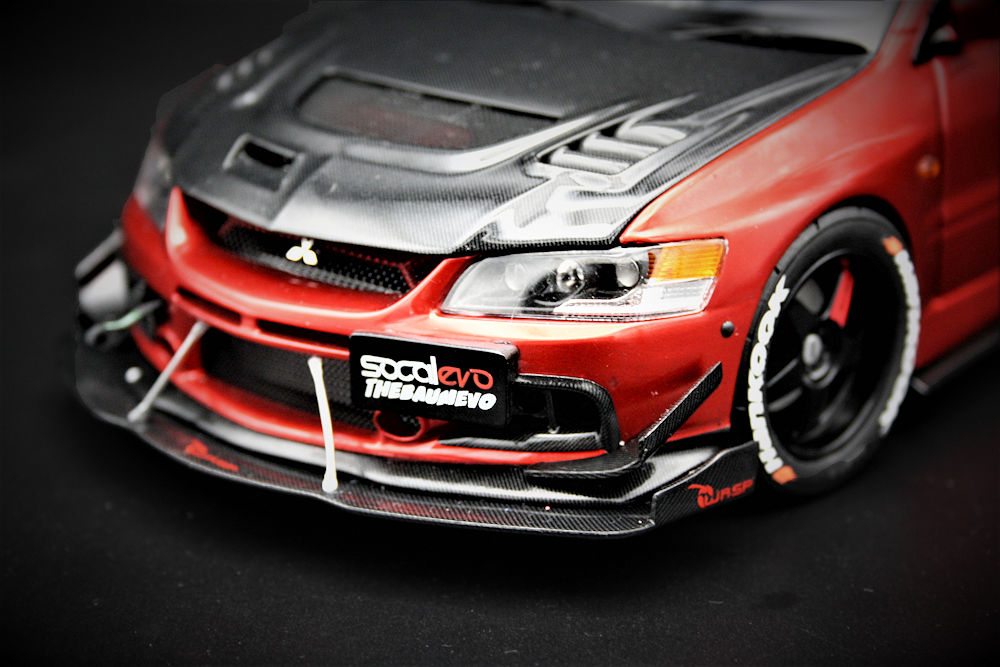 With all these changes over Super A´s previous Evos, the lights up front seem to have been updated over Super A´s past versions of the Evo after they have received some criticism. Of the headlamps´ three projectors, the centre ones always were brilliant, while the outer projectors now see updated to actual opaque lenses. The taillights remain consistently excellent. The rear end also sports a partially carbon-fibered spoiler and aftermarket rear diffuser framing a giant titanium exhaust. The three-diamonds-badge, the Lancer Evolution script and the key cylinders in the trunk as on the front doors are photo-etched, while AUTOart´s was only printed on the trunk and absent on the doors. The trunk is carpeted, but the lid dog-legged. 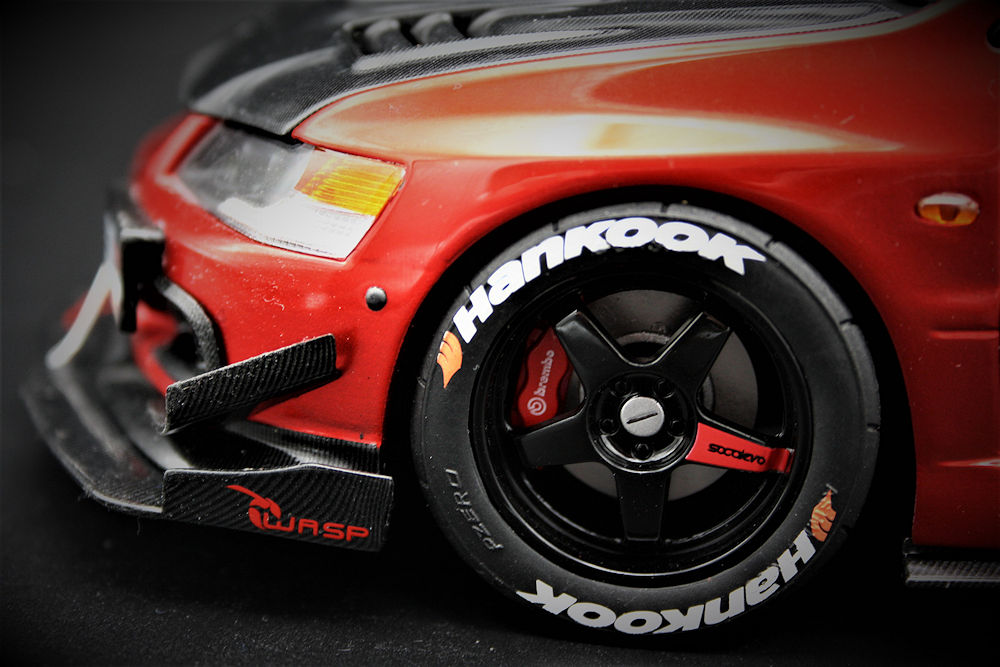 Nice touch on the silhouette of the car is the wind deflectors on the doors. The tires on the Ralliart rims that reveal the Brembo brakes have Hankook branding, but sadly no valves. Lamentably, the brake discs don´t keep up with the rest of the wheel either. 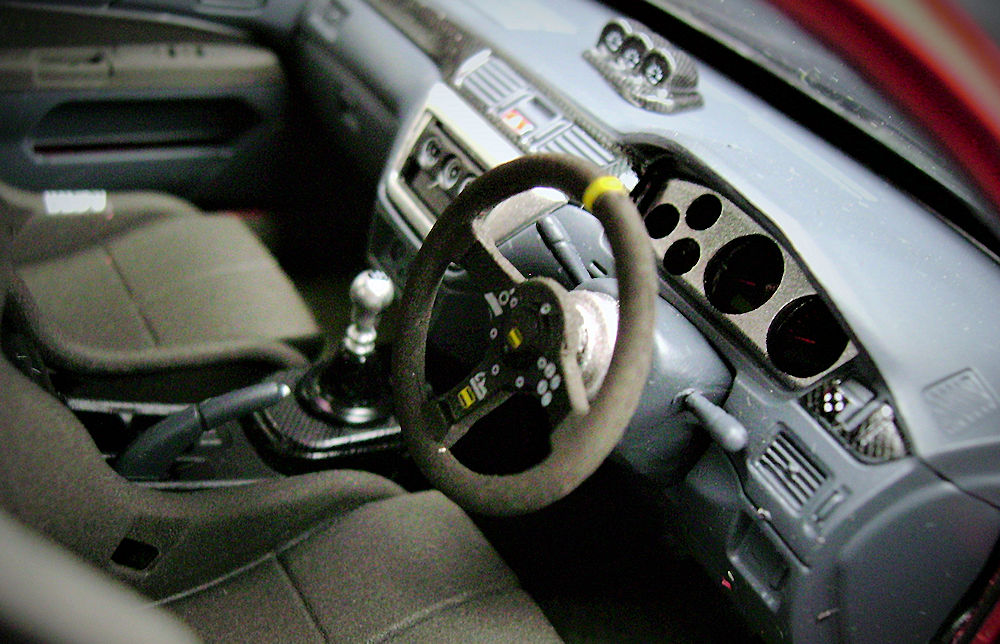 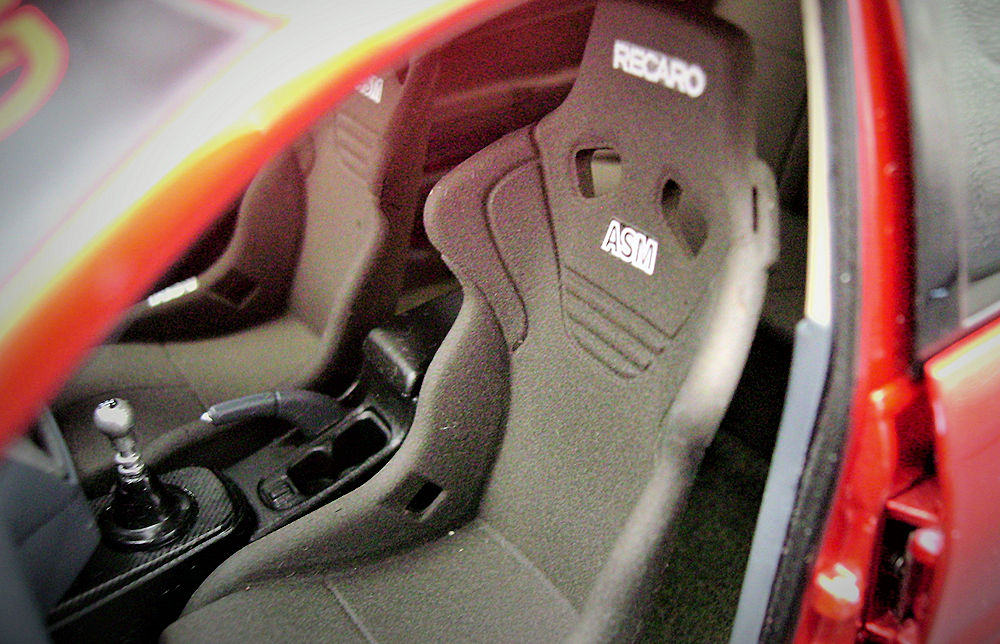 The interior, too, remains road-legal, with no roll-cage, harness belts or stripped-bare cabin, but full carpeting, standard three-point fabric seat belts and a credible replication of Alcantara suede on the detailed steering wheel and the Recaro bucket seats, that were funnily misspelled “Recoro” on previous Super As. Carbon fibre accents were given to the dashboard, the three gauges mounted on it and the shifter base. All the gauges and buttons are coloured and inscribed in utmost detail. Even the gear lever has the shift gates mapped on top. Nice interior for a cabin that is traditionally kept rather plasticky and spartan on the original Evos!

Unlike with their earlier Ralliart, Super A are clearly not only milking an existing mould here but have made significant changes and improvements over their previous Evos. Even if, like myself, you usually aren´t a fan of Asian, rally or tuning cars, this rather elusive model rocks more than its results in our Model of the Year Award suggest.