Most of you will most probably never have heard about TINY models, right? Neither had I before … but that´s too long a story to tell. TINY exclusively build … well… tiny models (most scale 1:64, some 1:43) of public life in their home town Hong Kong, and I don´t mean models of cars, but buses, cable cars, police vehicles, ambulance, fire, taxis, shopfronts, bus stations, buildings, roads, fly-overs, figurines, etc., etc. … the entire everyday public street scenery diorama of Hong Kong. That in itself is remarkable in conveying the same spirit of uniqueness, the same self-confidence and patriotism as what you may have heard about on the news. Imagine any other model manufacturer to be exclusively making models themed on a small administrative entity like, say Monaco, Luxemburg, NYC, London, L.A., Paris, Berlin, … you name it. Not that I´ve heard!

All the more remarkable that they care (and economically risk) to make 1:18 models about the same rather narrow theme that admittedly don´t come cheap. Unfortunately, DS was not interested in my 1:18 HK police models or their cool LED traffic lights. But I´m digressing! 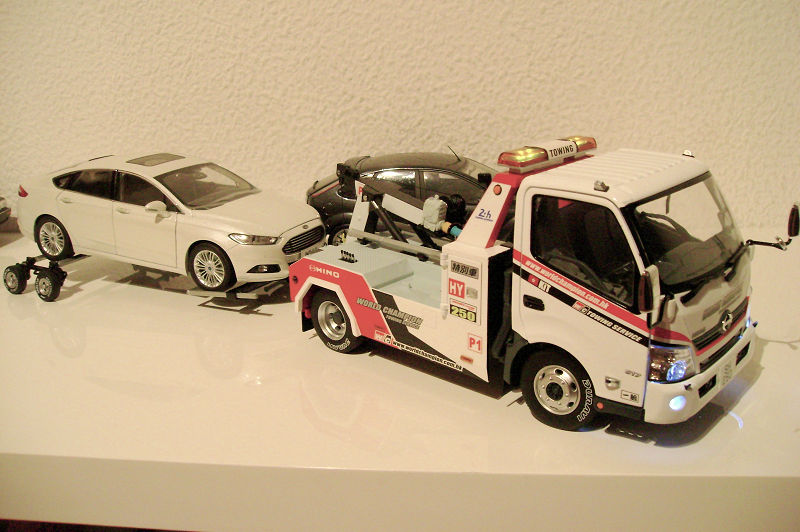 Up for review today is a local Hong Kong service´s tow truck, based on a small Hino 300, a budget utility marque quite common in Asia and Australia. Especially because 1:18 tow trucks all have been vintage so far and because of the clever towing technique in a compact package, this more contemporary version attracted me.

Out of the box, the truck is decorated with printed-on livery and advertising, you only have to add the wing-mirrors on their insect-like long stalks and load all the accessories to their pre-destined places, but no further installation required like for NZG´s open Car Carrier. The model comes with a car jack, a spare car battery, a blue openable box that contains not-so-well moulded-in tools and of course the two dollies with two different-lengths sets of bars (and 4 tiny screws that you´ll need to operate them, so don´t lose!). The smaller bits can nicely be stored into the openable storage behind the cabin. 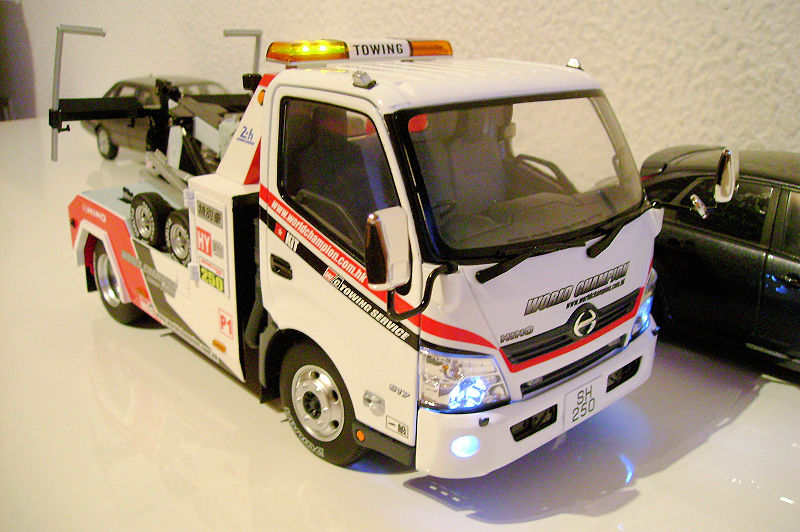 The slim grille on the diecast cabin, of course, is not break-thru and the huge shiny-chrome headlight-assembly under the clear lens is a single piece of moulded shiny-chromed plastic from which the amber-coloured indicators positively stand out. Instead of a bulb replica, the main beam section has a dark hole behind an LED will light up, once batteries have been inserted and a switch activated under the cabin. The same applies to the extra fog lights in the bumper. However, there is some visible light-bleeding from panel gaps that shouldn´t emit any light. The four-rectangle-section taillights in the rear bumper will not come to life and are rather simple and pin-mounted but supplemented with rectangle reflectors underneath. Much better are the additional lights on the arch for the amber lightbar behind the cabin, position lights on the front corners of the cabin and the sidelights and reflectors along the vehicle´s flank. The amber light bar will flash with the steady glow of the headlights to announce that there is some towing business in progress. 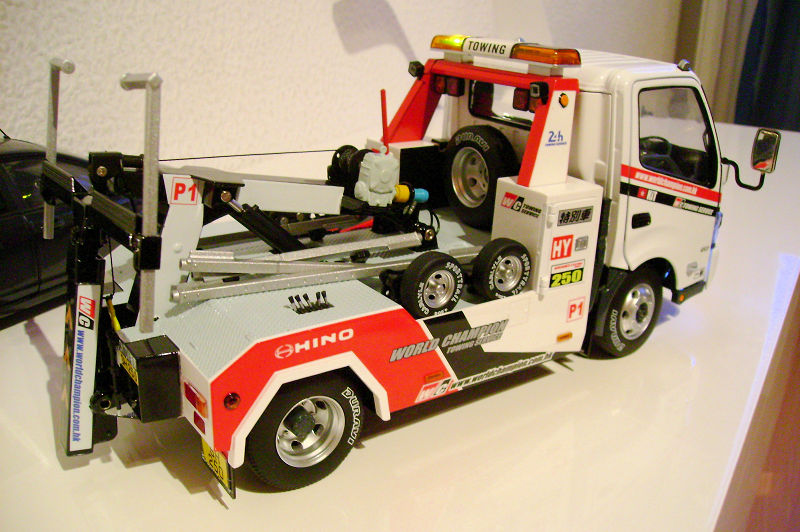 And that´s what the vehicle can do! While the rear body is plastic, the hydraulic lift arm is diecast metal and thus solid enough to lift a diecast model off the ground without lifting the truck off its front wheels. This is done by positioning the hook into the hole on the towbar that has been swung from vertical to a horizontal position, thus lowering the fork section to tarmac level. For neatly fitting the “victim´s” front wheels into the fork, screws can be loosened and tightened to allow the fork to slide and fix into position. The lift arm is then raised “hydraulically” and supported by the operating winch that solidly clicks into place, not allowing the cable to unwind, unless you depress the spring to do so, manually of course. 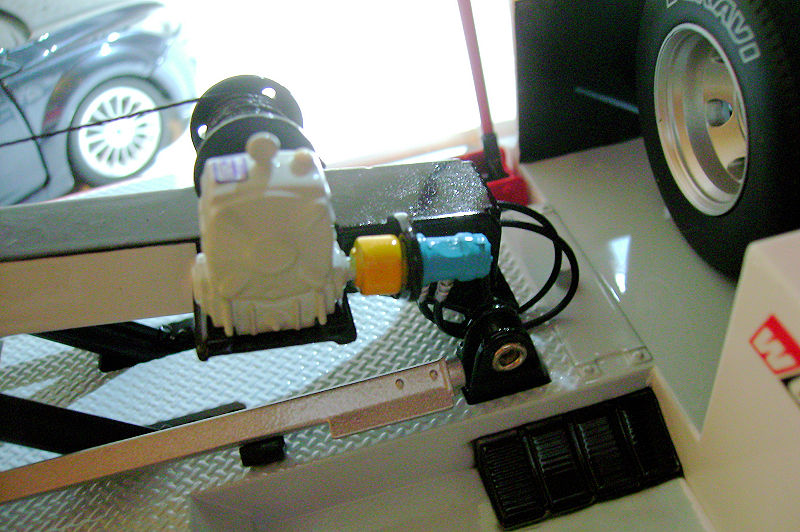 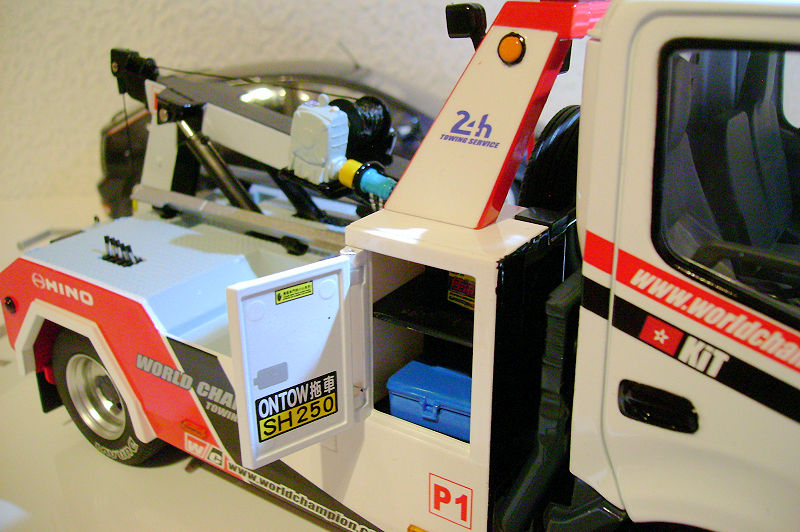 For picking the offending vehicle even out of its (no-)parking space snuggly tucked in bumper to bumper between two other vehicles front and rear, the snatching fork can be angled sideways. A pulled handbrake or all-wheel-drive is no excuse for not being towed on scale either, as the versatile parking-offender-snatcher has two dollies and two different lengths of metal bars on board to lift the rear wheels off the ground too and haul the hapless car away without adding an inch to its mileage. The dollies´ wheels even flip out into operational position like the real deal before being screwed to the bars front and rear of the tires of the offending vehicle. Unfortunately, the screws do not fully or neatly screw into the bars, but rather jam, so that the dollies will wobble sideways. No stable platform, not very good! In reality, the experienced towing guys will do that a lot more quickly and securely than you can achieve with the model. 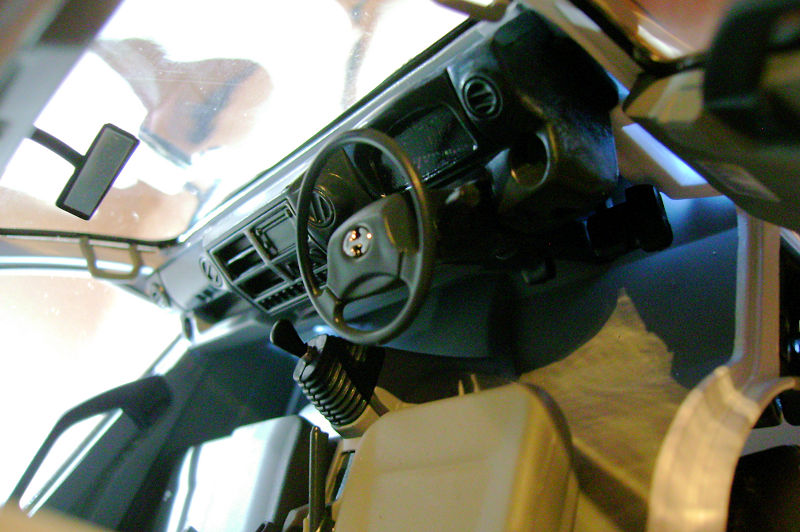 Once you´ve got the customer hooked, the operator can hop into the cabin through openable doors into the right-hand driver’s seat. The cabin itself is true to the original: basic, simple business-like as the original utility truck. For Worldchampions.com.hk´s employees´ sake, I hope, though, that they in contrast to their effigies that TINY offers separately do get seat belts for their health and safety.

Don´t expect anything from the mule´s undercarriage, it´s rather toy-like. And there is no access to the engine either. But honestly, who cares with a budget commercial vehicle? 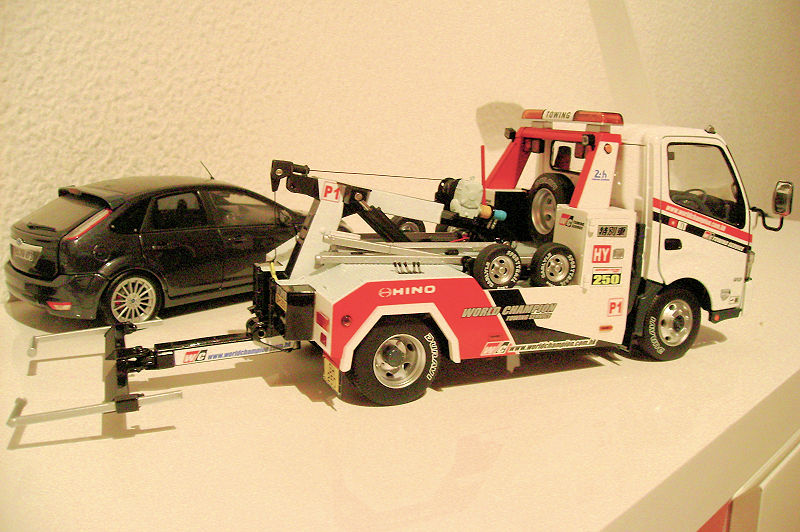 Like other TINY models this a unique piece of good old Hong Kong. And if this was a commercial I´d be saying “Get your piece of unique Hong Kong today, before it´s consigned to the history books” with one I on the news. However, this model in contrast to Taxis, police vans and other TINY models is not only interesting as a Hong Kong souvenir, irrespective of its origin it’s something out of the ordinary that might be a nice addition to any collection. However, it not only doesn´t come cheap, but is hard to get and can only be bought from Hong Kong, and both shipping routes and communication are a disaster. Mine came to Frankfurt via London with an abysmal British customs clearance company while the retailer preferred not to answer my emails, but be spoken to via Paypal buyer protection instead. Nice model, but not a nice buying experience, I´m afraid. That´s why I cancelled my order (again through Paypal buyer protection for lack of reply from the retailer) for the exquisite figurines, although I would have wanted them … through a better parcel service and without this customs clearance company being involved. Perhaps I´ll try again after Brexit when London is no longer an EU-port-of entry and customs-clearance can be done here locally as usual by myself.