The team at DiecastSocieyt.com hasn’t officially reviewed a TOP Marques example in length, well that drought is now over.  Under the microscope today is the 1:18 scale Mosler MT900S.  One thing about collecting scale model cars you learn about models and manufacturers that issue the real deal.  In this case prior to the TOP Marques announcement of the Mosler project we weren’t the wiser of the existence of Mosler Automotive and the MT900.

The now defunct Mosler Automotive was an American supercar manufacturer that produced cars from 1985 through 2013.  Headquartered in Riviera Beach, Florida. It was founded in 1985 by Warren Mosler.  The company produced the MT900R racer and the street-legal MT900S, as well as several unique project vehicles, until its demise in June 2013. 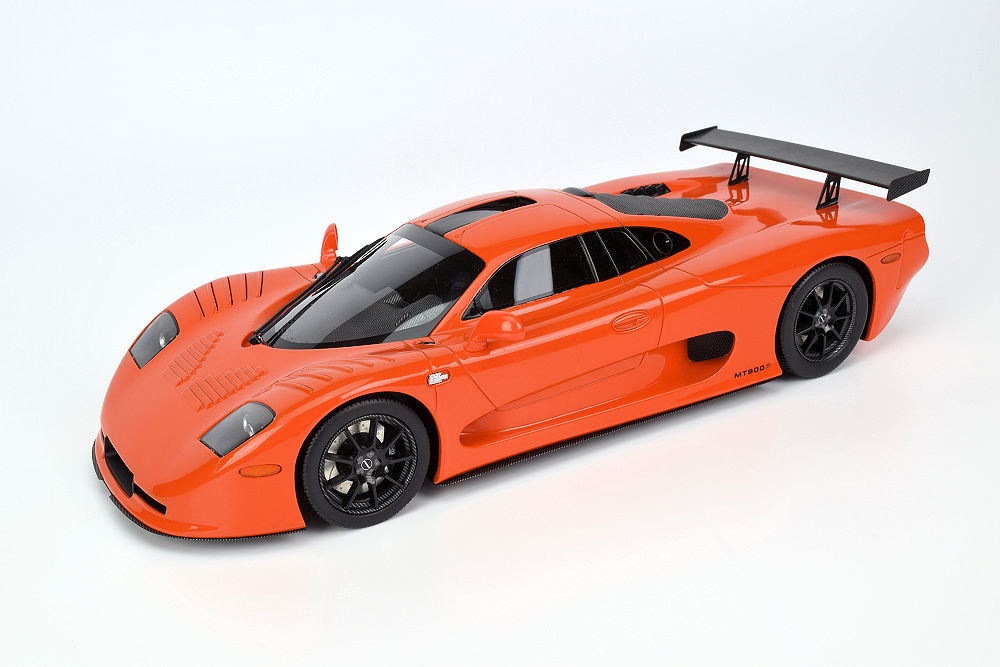 The TOP Marques Moder MT900S is available in three colours, they include Silver, Yellow and Orange, we choose the latter.  We’re not sure if these are all fantasy colours, but we can definitely confirm the Orange exterior was made.  As for paint application and overall results we find our example pretty much on point to similar resin brands.  As for capturing the overall lines and design of the original car, good marks, though some of the finer details are subject for review…

Out of the box is where the problems started.  At all four corners, the brake rotors were hanging loose on the supporting axle structure.  Not good.  To add insult to injury both front wheels we also broken as well.  Seems the wheels are manufactured in scale in two parts not one, outer rim and inner body…  This required some surgery.  We needed to completely disassemble the model to the inner working to repair.  Well, hoping to repair to an acceptable level at least. 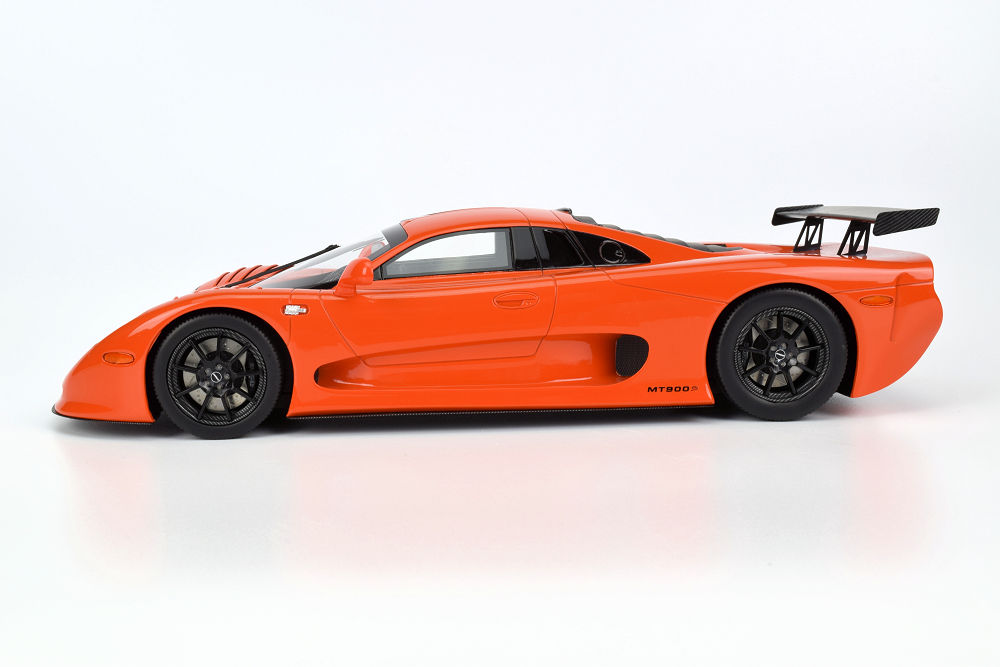 Taking a resin and sealed example apart isn’t too difficult. It is looking at the aftermath of all the parts and how simple one is in its raw form that scars the mind.  If you want to see or learn more review the article we did on the Fronti-Art example (taken apart) a while back.  And for the record, the TOP Marques sum of its parts is even more basic in design than Fronti-Art.  Please note we warned you LOL. 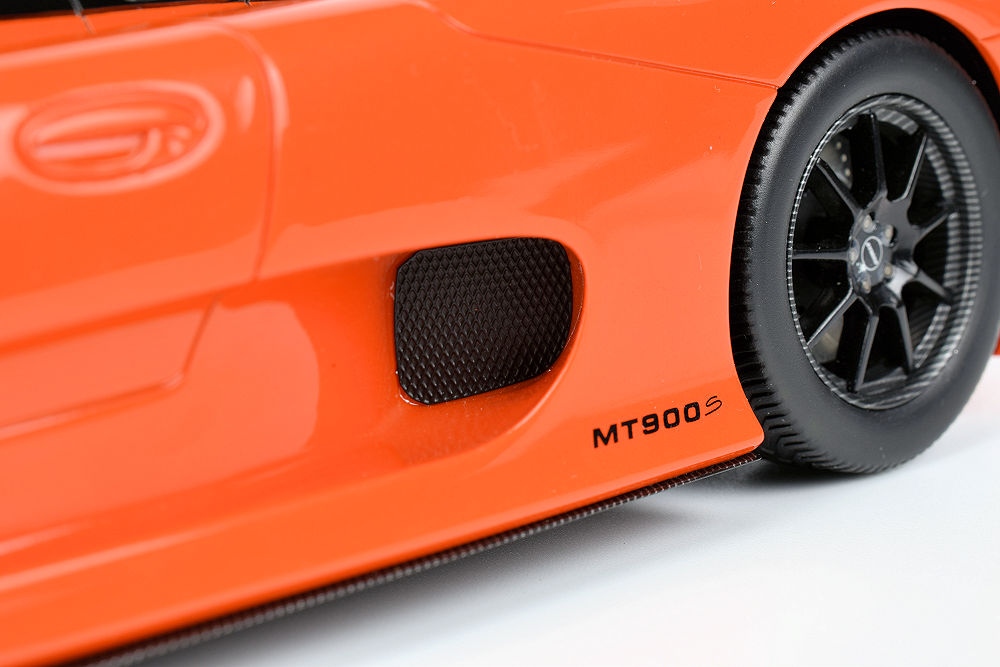 Getting back to the MT900S exterior the large side intakes are capped with solid plastic grilles and the two smaller ones on the opposite side features the same.  At north of 200 US, we think this is unacceptable. 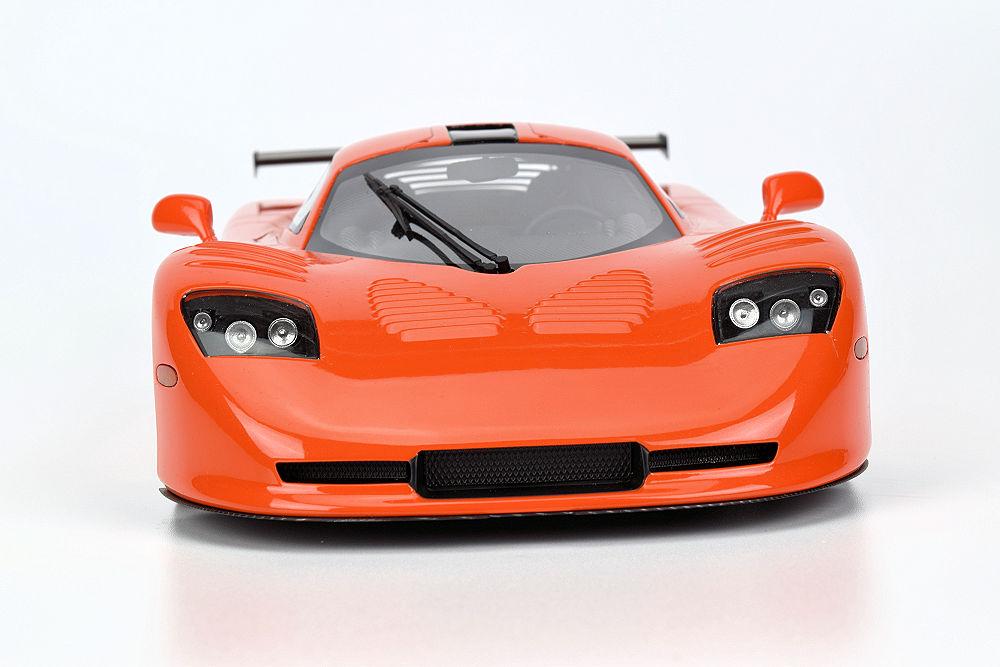 The lower front section features three openings, and once again completed with solid plastic.  As we move back the headlight package is average, however, fitment is extremely clean.  The centre cooling openings are somewhat primitive and the team missed the smaller opening at the topmost point (top side nearest to the front glass).  The larger outer ones over just over the wheels are better developed as they have Black paint in the rear that aids in the illusion that they are possibly open to the inside.  The hardware that keeps the lid closed is defined on top and side, satisfactory work here.

Moving to the rear, the upper section features a dominating spoiler.  Carbon fibre is present in the structure with decent brace work securing to the body, however, the fins on the side of the spoiler do not highlight the three bolts securing them to the main structure. 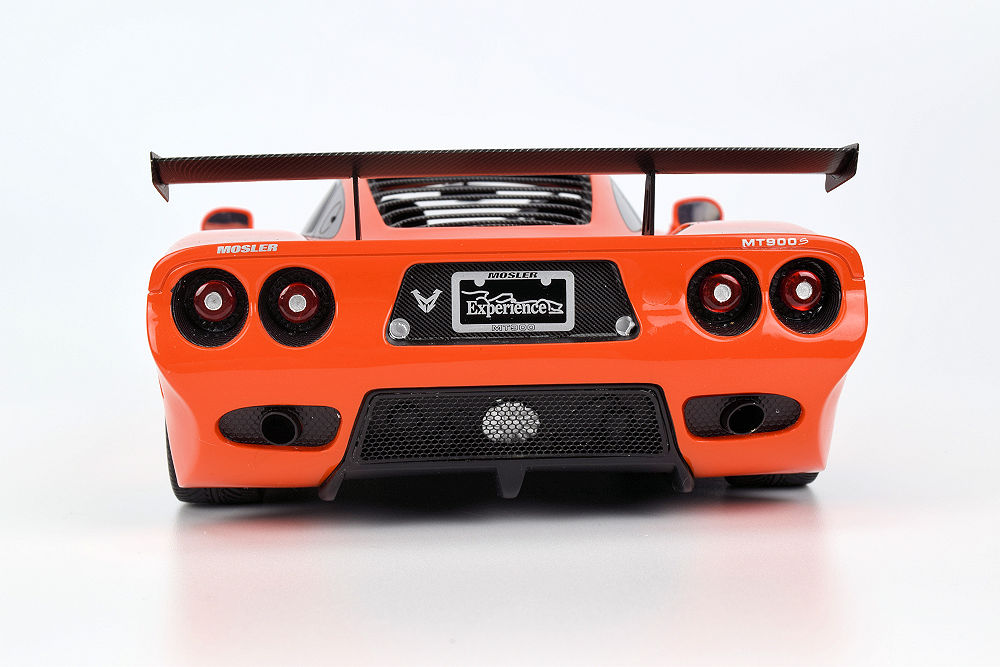 The lower centre section finally sees a splash of perforated metal grille work.  We like the visible detail in behind.  Where it fails again is the lack of perforated metal around the exhaust tips and inner back section of the four taillight housing.  The Mosler badge left of the licence plate and plate itself are simple flat decals.  They look inferior.  We’ll give a pass on the plate but the emblem at a minimum should be photo-etched. 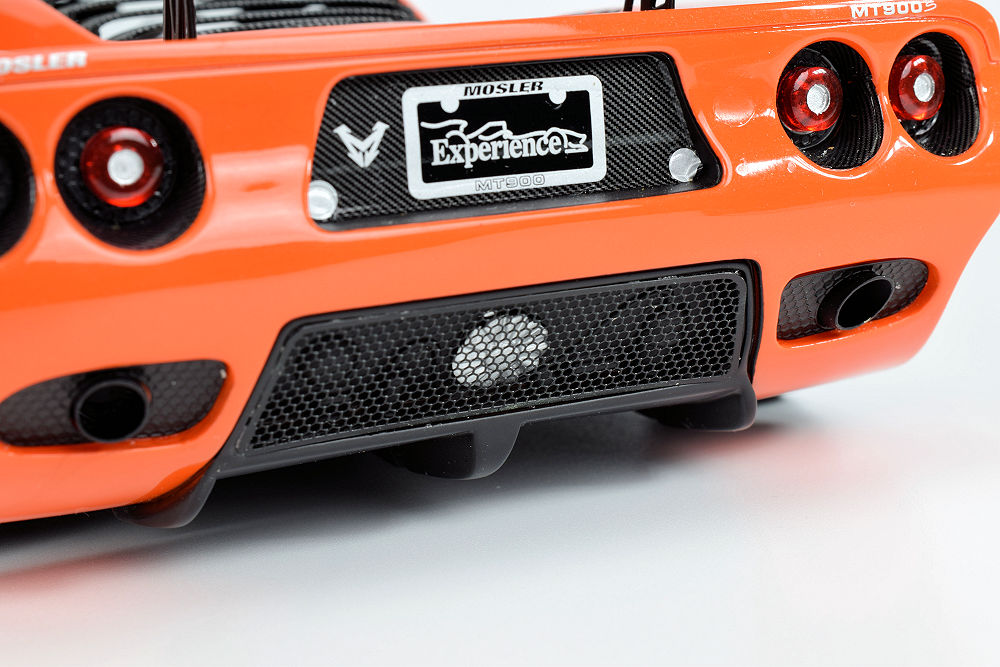 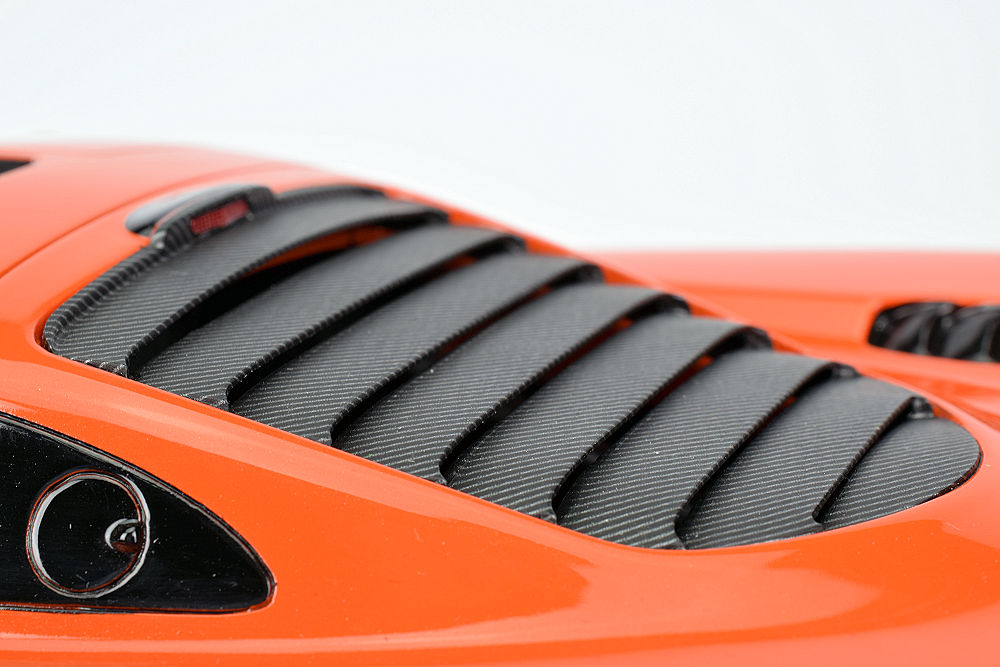 It’s not all doom and gloom.  We do appreciate the execution of the taillight material itself with the added carbon fibre detail surrounding.  Nicely done.  As we move forward the rear motor cover is completed with carbon fibre with individual slates, the carbon fibre weave mirrors that of the spoiler.  The two Black cooling apparatus to the right and left side are shoddy in design and seem more like an afterthought to the original design. 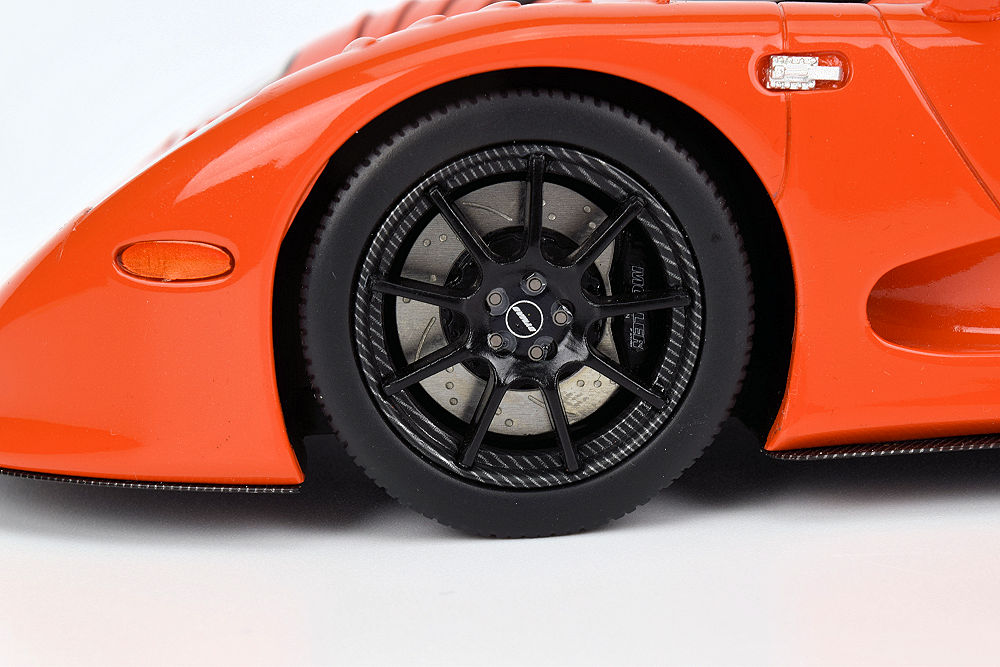 Wheels on the MT900S have the appearance of carbon fibre with slotted and cross-drilled rotors in behind.  Black calipers front and rear complete the package.  Based on our research the carbon fibre weave is too large (scale representation) and TOP Marques missed the rear secondary parking brake within the rear set. 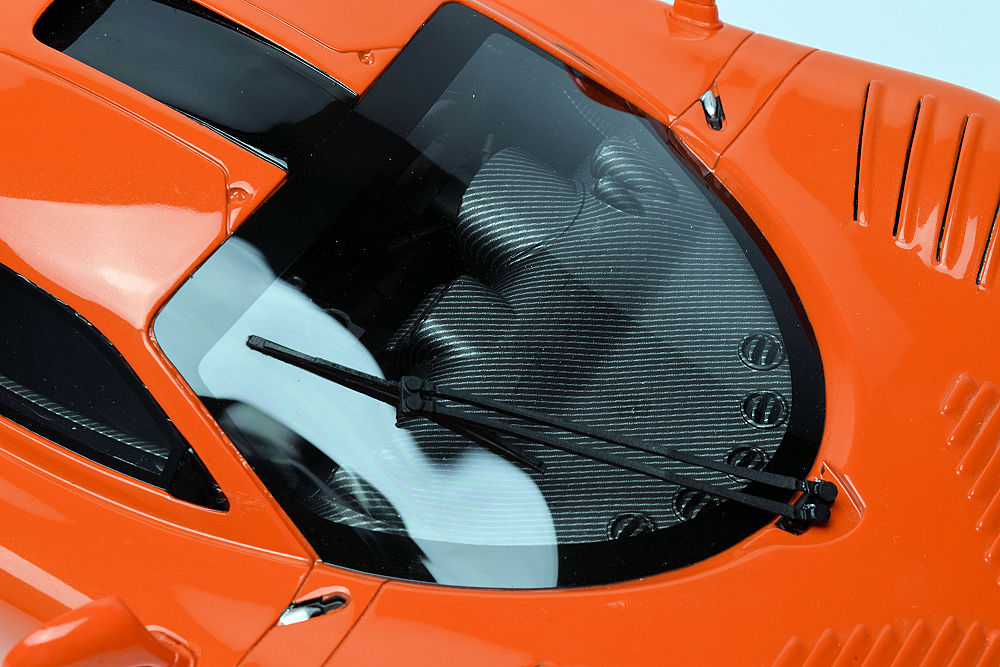 Not much of the MT900S interior can be viewed from the window opening.  The car leans as a more tracked focused interior than one of creature comforts.  Carbon fibre elements are found throughout as you can see through the front view.  Dash and door cards follow the same.  The tiny details in the dash and immediate surrounding areas are good as well.  Seatbelts are provided with Simpson aftermarket upper padding included too.  What the interior is missing is the alcantara texture, and there is much which is not included with this example.  Again, at this price point, we believe a little more is expected.

The TOP Marques 1:18 Molser MT900S comes as a mixed bag of emotions…  On the one hand, we love the subject matter and the uniqueness of the car.  Overall exterior design is good as well as paint.  Then we have the other stuff.  Lacking in finer details, which include perforated grilles, missing and poorly executed elements and the above-average price tag.  Add we can’t forget the numerous quality control issues.  Now one might say we’re being a somewhat bias since any model can have QC issue or two, we agree!  Well, at the time of purchase our team member also added their Jaguar XJ220 to the mix.  The Jaguar XJ220 arrived with a section of the rear glass not painted (Black) and alignment within the cavity was weak as well. 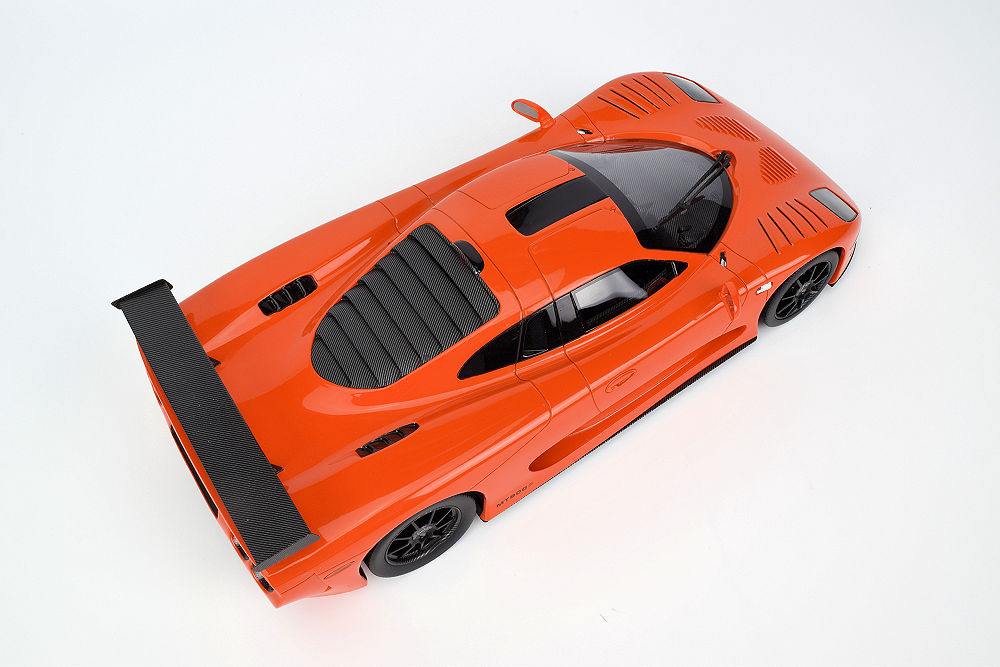 One thing we want to add, the retailer of purchase was extremely helpful and provided superior service after the sale.  Thank you FiveDiecast.com!  Also, in doing some research on the Mosler MT900S review, we found TOP Marques quoting our team throughout their website.  This is NOT fact; those quotes are from a third-party review and are NOT a true representation of OUR views.  We will be contacting them to remove.

Sorry TOP Marques at this price point you need to work on the smaller details and ensure quality control is at the forefront and paramount with each new release.  This is something that should not be left to owners to correct or retailers to absorb.  If you’re interested to buy please proceed with caution.  Enjoy the pics!