The old line is that “alcohol and gasoline don’t mix”. It turns out that alcohol manufacturers and auto racing do mix – at least when you are talking about the Martini & Rossi Distillery and Porsche.

When motor racing sponsorship was opened to ‘non-automotive related’ sponsors Martini & Rossi were quick to seize on the opportunity to have their logo grace racing cars all over the world. The Martini Racing Team cars were always crowd favorites with their beautiful and imaginative liveries.

Porsche on the other hand was just into building world beating race cars and they and Martini teamed up for a remarkable run through the 1970’s with a number of Porsche race cars including the 908, the 910, the 911, the 917, the 935 and the 936

The Porsche 936 was introduced in 1976 for competition in Group 6 Sportscar Championship racing and the 540 horse power, turbo charged flat six engine racer was a huge success right out of the box. It’s success that year included a victory for Porsche and Martini at Le Mans. That success continued in 1977 with another victory at Le Mans with the 936/77 and its distinctive air intake just behind the drivers head. Jackie Ickx would go from being a great driver to a legend thanks in part to his three Le Mans victories in the 936.

True Scale Miniatures has chosen to model the Martini Racing Team Porsche 936/77 1977 Le Mans winner which was great news for collectors who have been waiting for the long promised but never delivered model from Exoto. 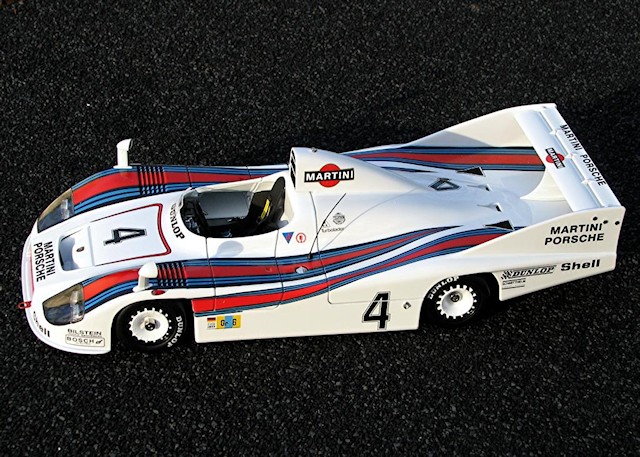 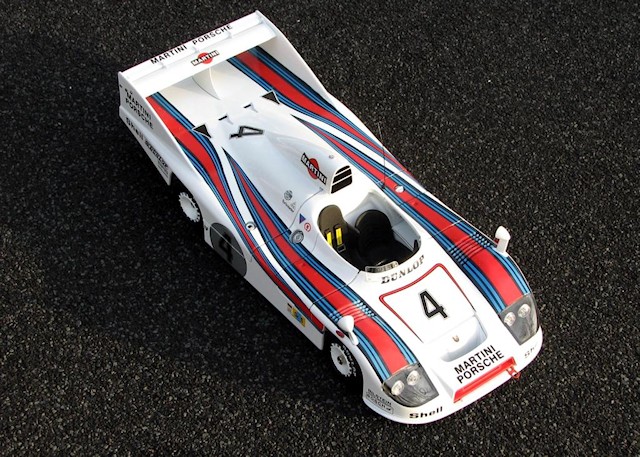 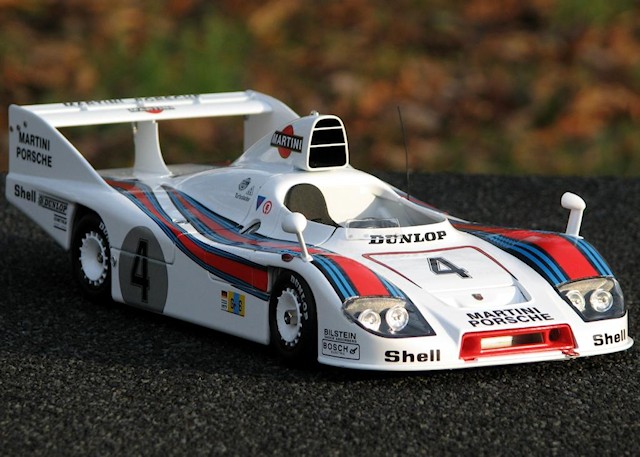 First off the model is a striking mixture of shapes and colors. TSM has done a great job modelling the distinctive shape of the Porsche 936/77 and then adding the tasteful and flowing Martini livery. My car was nicely painted, the livery generally clean and crisp and the panel fit very good for a model of this type with the body sections coming off easily and fitting back with tight even seams. The car seems the proper ride height and wheel track looks spot on. All in all the car looks really good from any angle you choose to look at it. 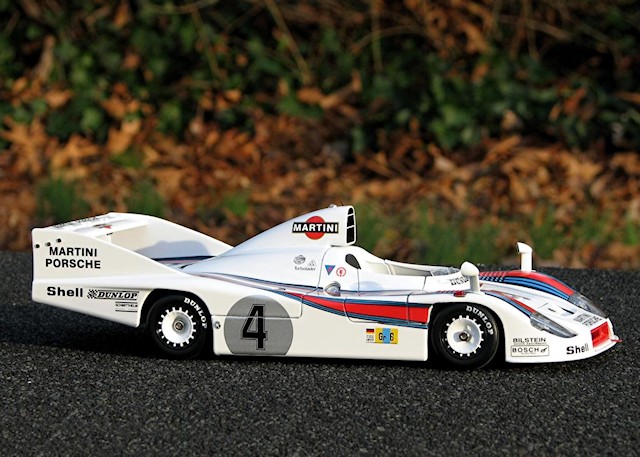 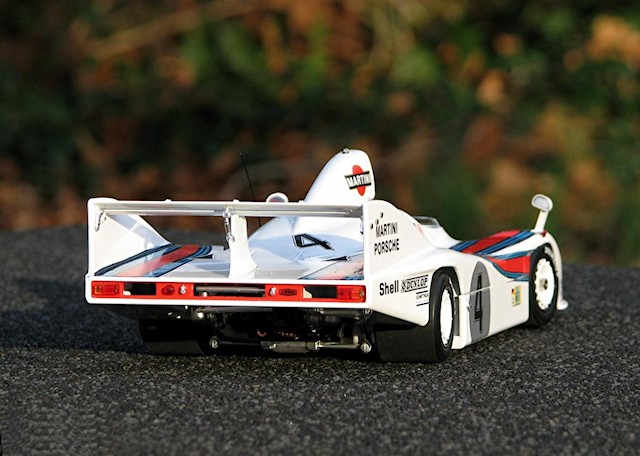 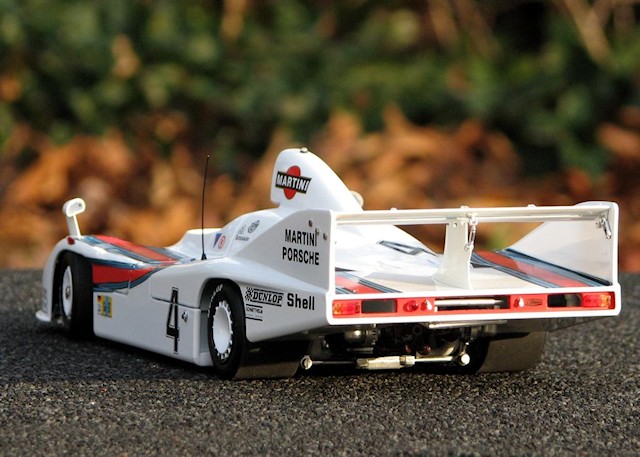 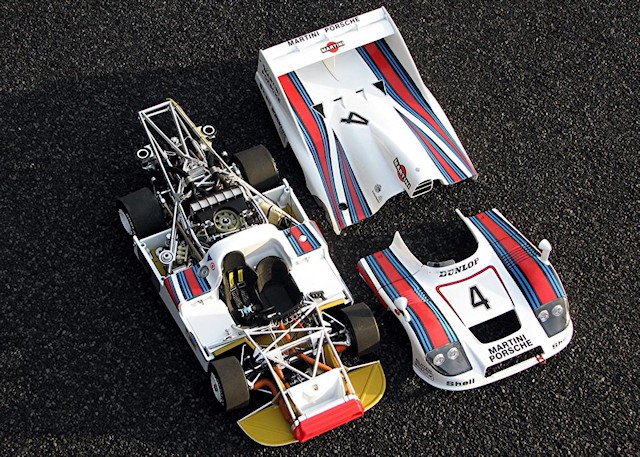 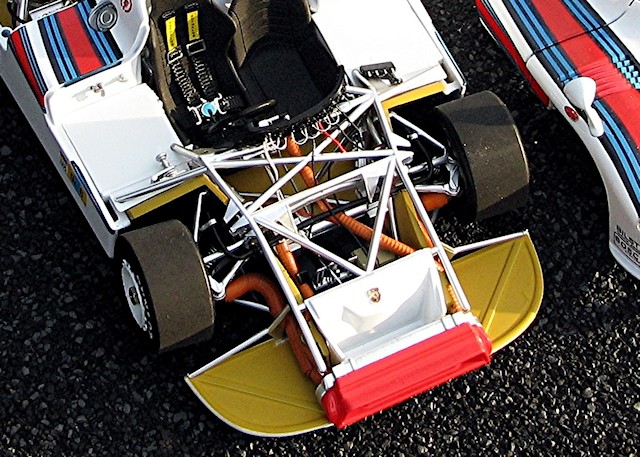 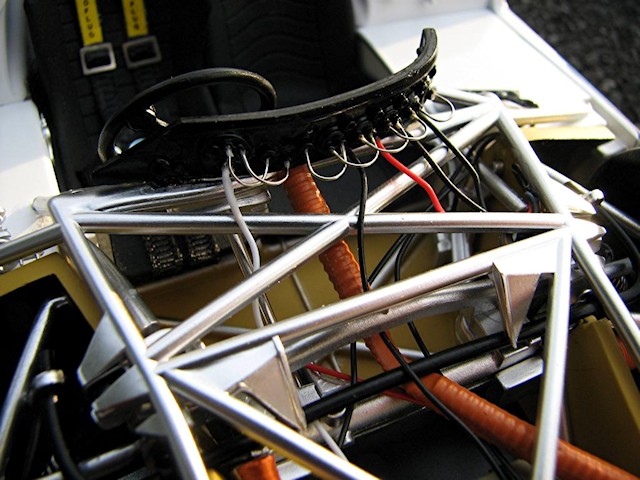 The cockpit is nicely done, particularly the dashboard. 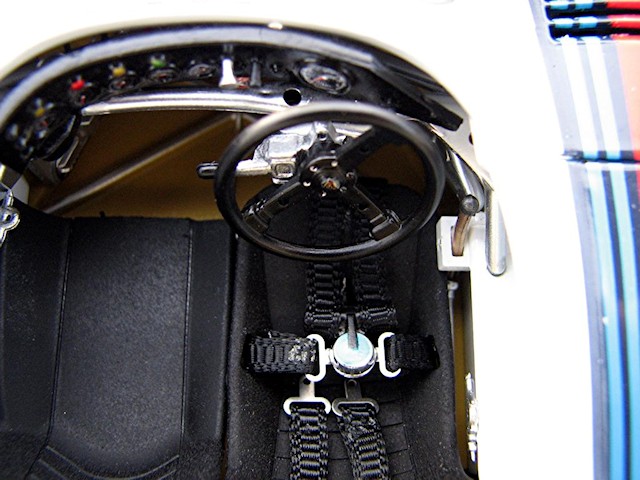 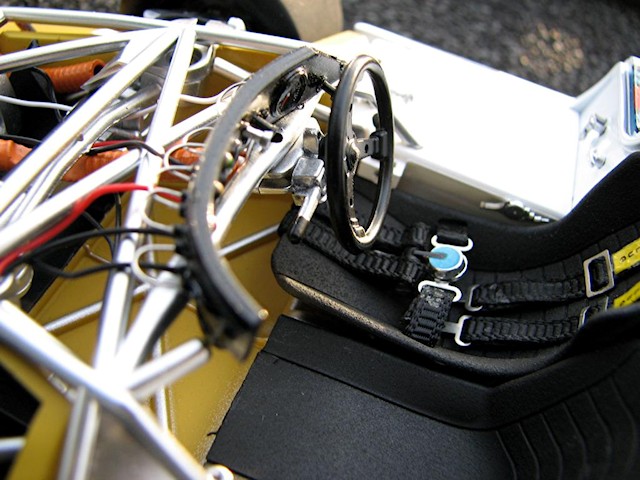 The rear of the car is a riot of engine, tubing, wiring, ducts, suspension bits and pipes. It looks like it is all there in a nicely done mix of coloured and patterned materials. 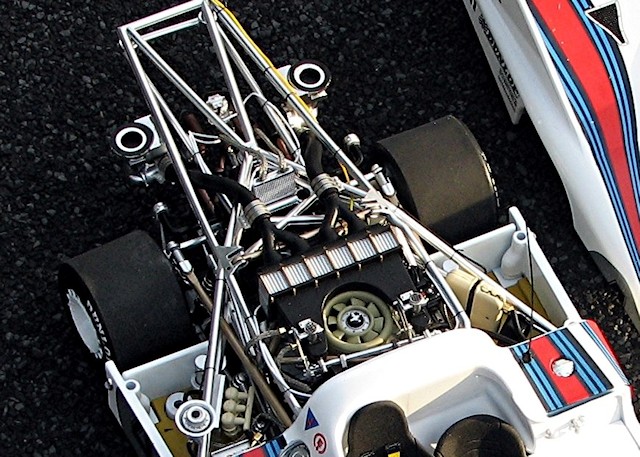 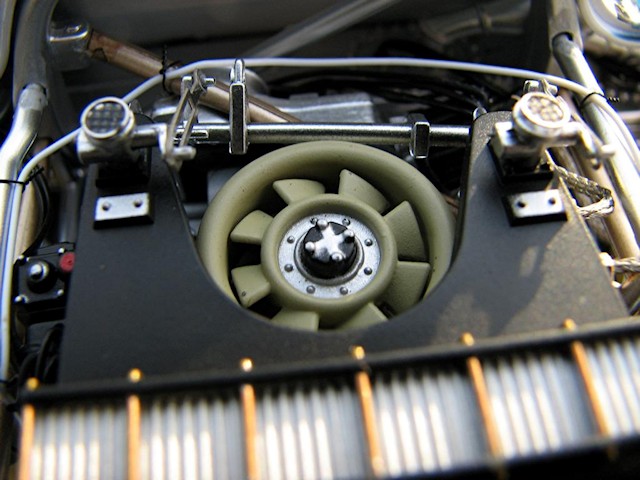 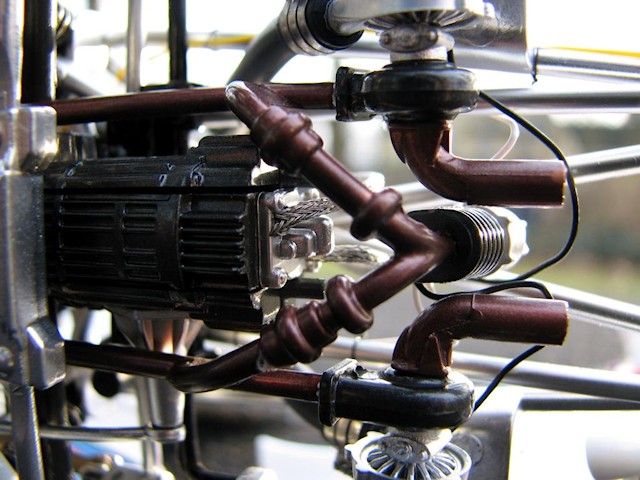 The wheels and tires are pretty well executed although the wheels could have been a bit more crisply done as the paint seems a bit thick. 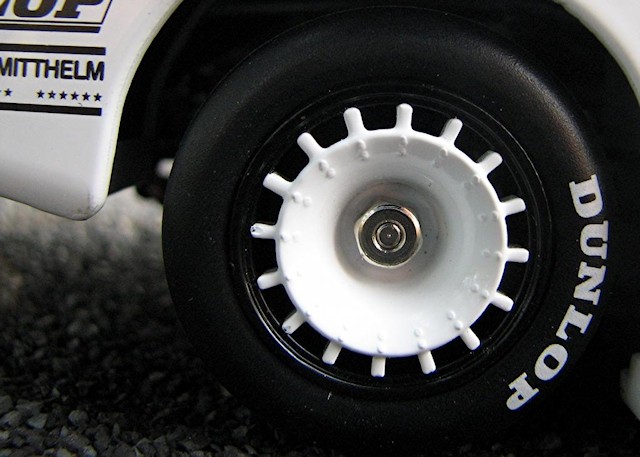 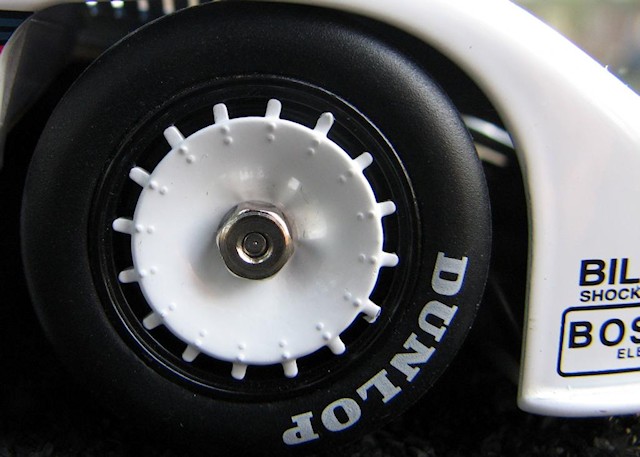 I’m a big fan of real vents, real screening and clear glazing and TSM does not disappoint on that count either. 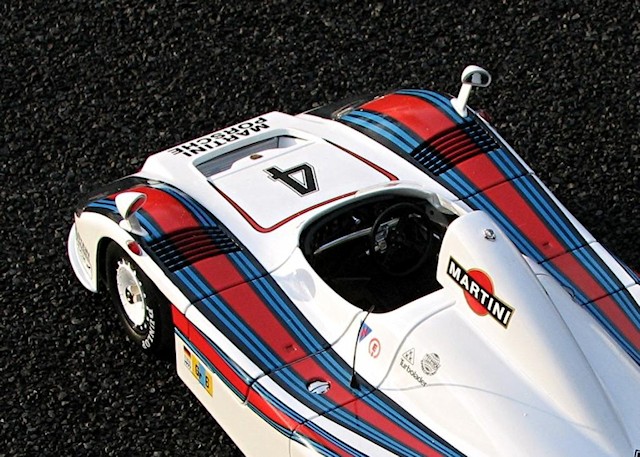 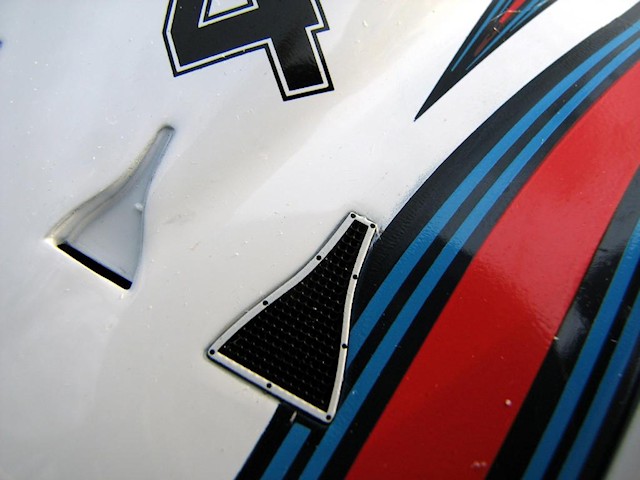 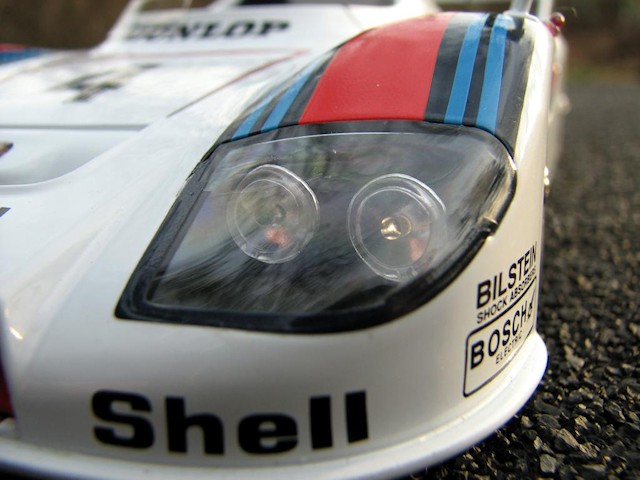 It seems the biggest flaw on my model was the antenna which came bent in an arc although in truth I like the way it looks. 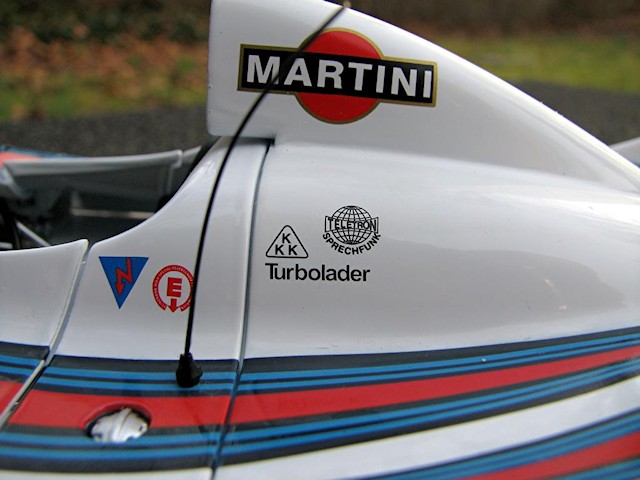 The car additionally comes well packaged in a clam-shell box with excellent outer box graphics. It also comes with a tool to get the wheel lugs on and off with.

There have been some early QC issues with this model – my antenna not withstanding – mostly involving wheels that won’t seat properly into the wheel hubs and some front body panel fit issues. I must admit that I almost expect panel fit issues on cars with body panels like this as I experienced issues with models from Exoto, PMA, AUTOart & GMP in the past. I was happy that neither the wheel issue nor panel fit are evident with my model. My experience with True Scale Miniatures is that their customer service will work with you to resolve any issues you have so I would not let possible QC issues, which frankly can pop up on any car, prevent me from getting this one.

This car represents a great value from the perspective of build quality for the dollar and looks fantastic on the shelf thanks to Porsche’s design and Martini’s style. This one should be a ‘must have’ for race car collectors, Le Mans buffs, Porsche fans, Jackie Ickx fans and guys like me who just love the livery of Martini sponsored race cars. 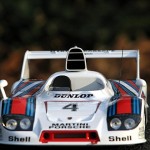 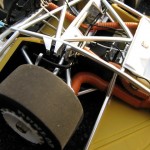 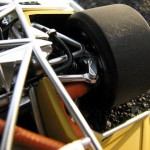 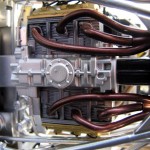 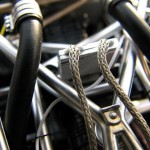 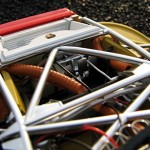