About the BMW M235i Racing Team Scheid Partl…   “As a further model for the already developed 24h Nürburgring and VLN cars of Spark there was launched recently the new M235i in attractive coloring under the name “Eifelblitz” of the 24h race in 2014. With Max Partl, Michael Rebhan and Jörg Weidinger this car took part in the M235i Cup for Scheid-Partly Motorsport as well and could achieve a remarkable 3. place in the overall ranking. On the other hand the team had bad luck at the 24h race as the blue-black-yellow painted “Eifelblitz” was hit by another car short after the beginning of the race. Johannes Scheid, who was already naming his fast M3 “Eifelblitz” several years ago, and his mechanics could manage to repair the car within a short time and the car could go on driving.” 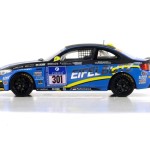 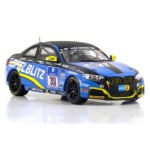 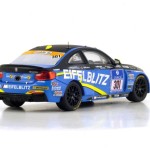