Two models are coming from Amalgam that features the Ferrari badge.  The first in 1:8 scale is the Ferrari #512 BB LM.  Can you imagine the layers of detail when you bring to mind the classic 1:18 version from Kyosho?  One of our favourites for sure!

The second is the 1:18 Ferrari 250TR.  Another resin piece with a sealed design.  The 250TR will be on sale this coming August.  Suggested retail $595US.  Sorry for the lack of photos this is all the team at Amalgam has posted to date.

About the 250TR…  “This is the car, number 14, which powered Phil Hill and Peter Collins to victory at the 12 Hours of Sebring in 1958. Six of these Testa Rossas competed in the 1958 edition of the mighty race, including three Works entries and three privateers. Appreciating that Sebring is notorious (even to this day) as a circuit of high attrition, Hill and Collins decided pre-race that they would not drive at ten-tenths in the early stages, saving both the car’s brakes and gearbox. They sat in the fourth position in the first hour, then fell to fifth and stayed there for the next three hours. In the fifth hour, both Astons experienced a gearbox problem and before the halfway mark, number 14 took the lead. Covering 200 laps, 1040 miles and an average speed of 86.5mph, this was the car that established the all-new Ferrari 250 Testa Rossa as the main sports car championship contender for that year, with its second straight victory in the series.” 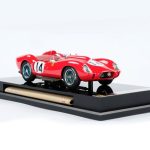 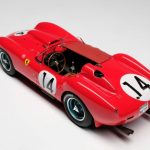 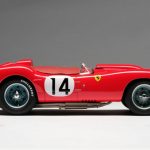 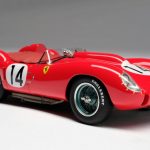 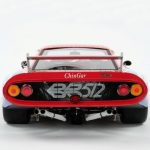