Celebrating the stories of many forgotten cars is the theme of the book.  One of them is the Volkswagen T2b Curry AKA the Sausage car. A final piece from AutoCult’s December installment.  Where the team finds these odds classics is absolutely fine with us.  Their will to bring some of these memories into scale should be commended, along with their attention to scale detail.  Look for both on shelves by mid December.

About the Book and the Sausage Car…  “The 184 pages book “AutoCult” is a different kind of book – it is THE book for the automotive enthusiast who wants to learn more about the many stories of long forgotten automobiles, brands and other developments. Whether rare, fast or strange – many  interesting stories in conjunction with precise historical accuracy, flanked by many historical photographs and illustrations of AutoCult models, make this book (as well as all future editions) a reading experience for those interested in automotive history.  There are some things in life, that local and foreign people would designate as 100 % typical German. In the matter of food culture the famous German “Currywurst” (curry sausage) should be one of the top answers and the brand Volkswagen when it comes to automotive culture. In reply to the question of whether it is possible to erect a combined memorial for both, the answer would have been a simple “no” recently. Since March 2015, as an ingeniously succeeded symbiosis came out first, this has been changed.

The Austrian artist Erwin Wurm, who is known for his work that portrays manipulated images of things in everyday life, had the idea to combine both cult objects. His idea felt on sympathetic ears at the headquarters of Volkswagen in Wolfsburg and as he experienced difficulties during the realization of his idea, he immediately received support from several sides. The art museum of Wolfsburg was on hand, 17 trainees of the Audi-VW Group were allocated to work on the project and even in finding a suitable vehicle he got support. Retirees of the Volkswagen Commercial Vehicles division made a find in Greece and brought a VW T2b back to Wolfsburg. For its new intended use the whole interior was removed. New steel parts built the framework for the installation of a modern kitchen unit fitted with a deep fryer and a powerful cooker hood in the headliner. Externally the car body was supposed to look totally different compared to a traditional T2b to depict the homage also visually. Thick styrofoam parts were glued with putty and expanding foam on the tin bodywork to visualize a paunchy sausage on the VW. After repainting it in a colorful orange at the paint shop AutoVison in Salzgitter, everybody should have been delighted with the result.  From March 22 until September 13 in 2015 the mutated VW T2b was part of the exhibition “Erwin Wurm, Fichte” at the art museum of Wolfsburg” 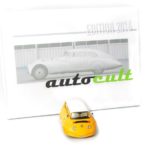 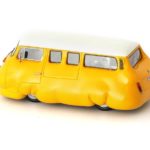 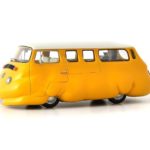