The car was announced back in February 2015 by Automodello, today we bring you a first look at the initial prototype 1954 Kaiser Darrin 161 Cabriolet Tribute Edition in Pine Tint.  Model is scaled in 1:24 and features removable convertible top.  Retail is excessive, listed at $354.95US.  We think a bit steep for small scale, and closed-body replica.  Pre-order is available now.

About the Kaiser Darrin 161…  “Kaiser Darrin 161 was one of its designer’s final achievements and was noted for being the first American car equipped with a fiberglass body and doors that slid on tracks into the front fender wells. The car was named both for Henry J. Kaiser, head of Kaiser Motors, and Darrin.  The Darrin was conceived as part of an movement in Detroit to compete head-to-head with European roadsters being imported to and sold in the United States in the post-World-War-II period. Among other products developed were the Ford Thunderbird in its initial two-seat form and Chevrolet Corvette. While the Darrin was designed attractively, it was also under-powered and, while a good performer overall, did not measure up to foreign vehicles such as the Nash-Healey or Triumph TR2. The Darrin’s high price tag, lack of consumer confidence in Kaiser’s viability and practical challenges with the car’s design resulted in low sales, though sports cars at the time were generally not fast sellers. Along with 6 prototypes, only 435 cars were produced.” 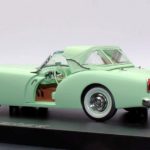 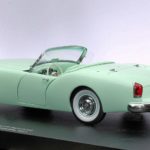 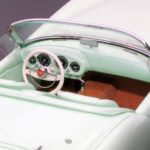 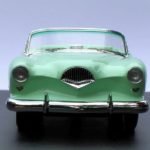 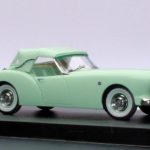