100 extraordinary years, time to celebrate, with a gold-rimmed cup of coffee and a piece of cake. And what a piece of cake it is for Bentley´s centenary: It´s not Walter Owen Bentley´s birthday, but that of the company founded by him who was only known as W.O., yet the pie has his name on it: The Bentley Mulsanne W.O. Edition by Mulliner. 100 lucky owners receive this limited edition Mulsanne commemorating Bentley´s centenary. And as if to congratulate Bentley on its centennial, Almost Real has surprisingly released their own limited edition 1:18 model of Bentley´s limited-edition flagship in time for the party. 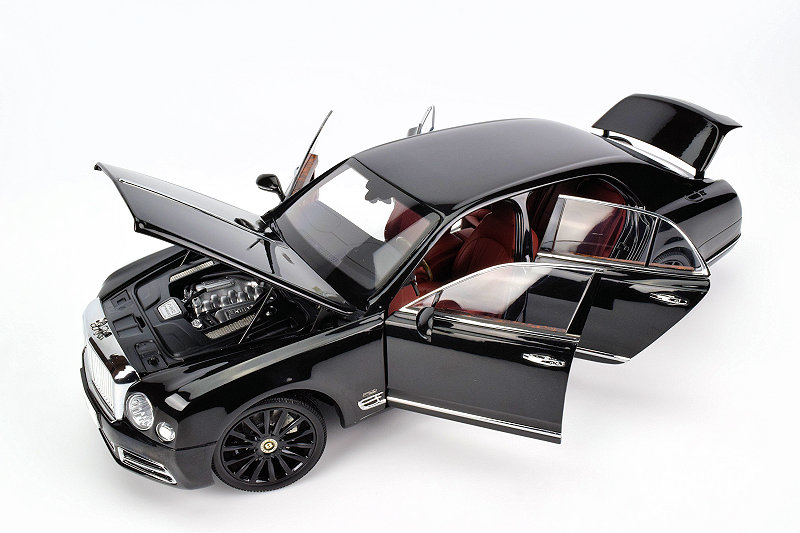 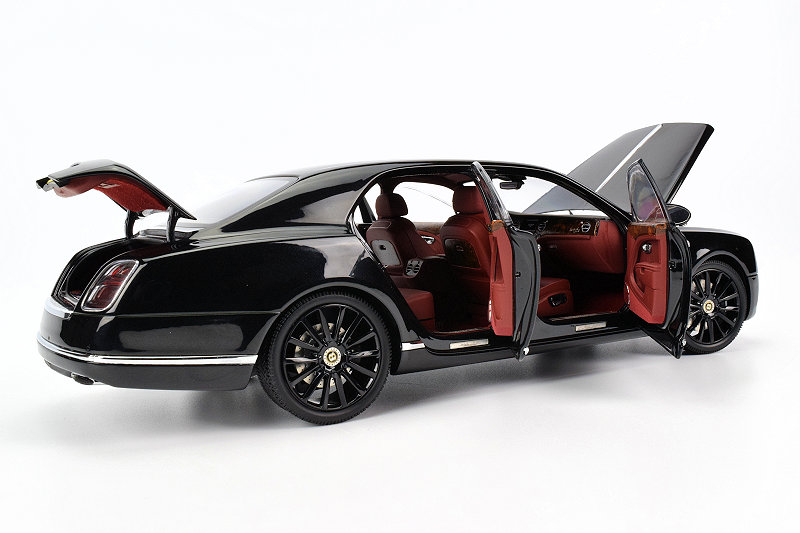 There are a couple of features setting it apart from the “ordinary” Mulsanne if any such thing can either be said about Bentley´s product or Almost Real´s replica. Like Almost Real´s “ordinary” facelift Mulsanne models, Almost Real´s W.O. Edition is dominated by a huge vertical-chrome-bars grille, topped with the finest-crafted Flying-B radiator ornament I have ever seen (by comparison to Minichamps´ and Kyosho´s Bentleys). 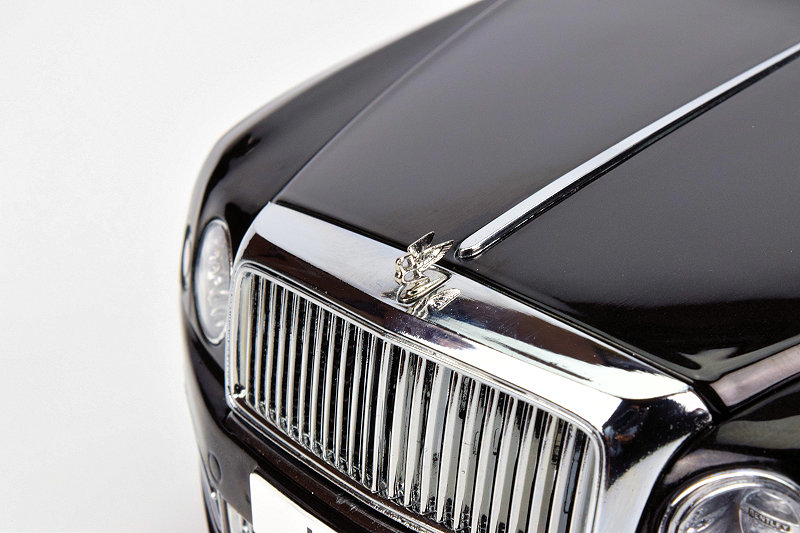 Although you need to shine a light to see it hidden behind the radiator grille´s bars, Bentley´s traditional mesh is behind that, perforated like the chrome-framed air intakes in the lower spoiler left and right. That is extraordinary, given that Kyosho´s exposed “mesh” grille was faux,  a solid unperforated plate. The radiator shell being in chrome is what sets the replica apart from its normal production model-brethren while being an option for any real Mulsanne. Not everyone may like this shiny option, but it is one of the features to imitate one of the design cues of W.O.´s personal 1930 8-Litre Bentley, on which this limited edition Mulsanne is modelled. The same is true for the exterior colour shared by both vehicles. The old-fashioned chrome bar along the bonnet´s centre reminds of the 1930s car, too, when bonnets opened sideways and where centre-hinged there, and is absent from the ordinary Mulsannes of course. 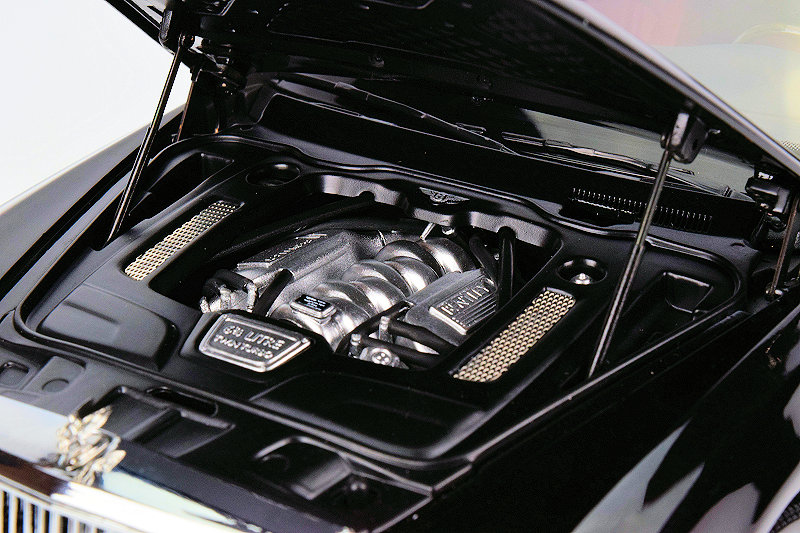 Underneath this bonnet that opens on struts the Mulsanne´s powerful engine is hidden away, and in this time and age when most collectors moan about engine detail, they might agree this time that this engine block is sculpted more pronouncedly than most of the competition and it is laudable that you find a couple of black hoses running across the bay with an engine plaque in front and a winged B rear. Vintage fans still won´t be satisfied, but that´s what a 21st-century car looks underneath there. 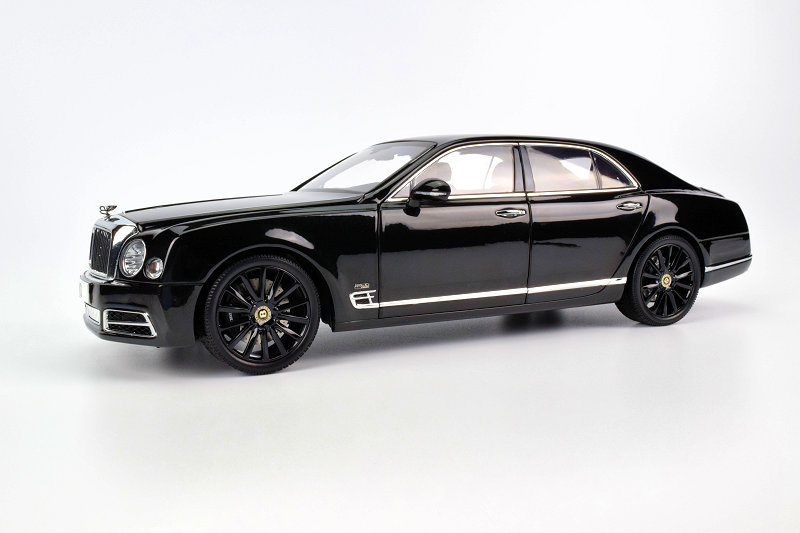 Contrary to what you might think, the registration is not unusual as each newly launched Bentley was presented with it in the past, but it´s, of course, befitting this W.O. Edition more than anything else and Almost Real have carefully chosen to give their other Mulsannes different registrations. Mind the tiny “Bentley Motors Limited” in it. The headlights, bearing some sort of crystal lenses at their centres and clearly legible “Bentley” scripts, are as good as Kyosho´s and Minichamps´ Mulsannes´ , though those were different in being pre-facelift design, and so much better than Kyosho´s Bentayga´s same  design headlamp that it is a pity that Almost Real had to cancel their Bentaygas. 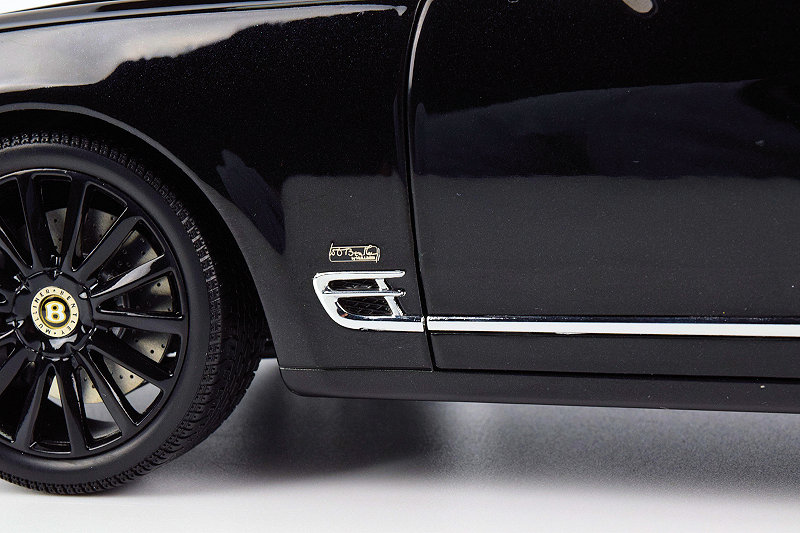 In addition to the chrome-framed and B-shaped air vent in the side wing, from which a chrome application runs back along the flank of the limousine, the W.O. Edition has a “W.O. Bentley by Mulliner” script in photoetched shiny chrome, replicating W.O.´s signature. 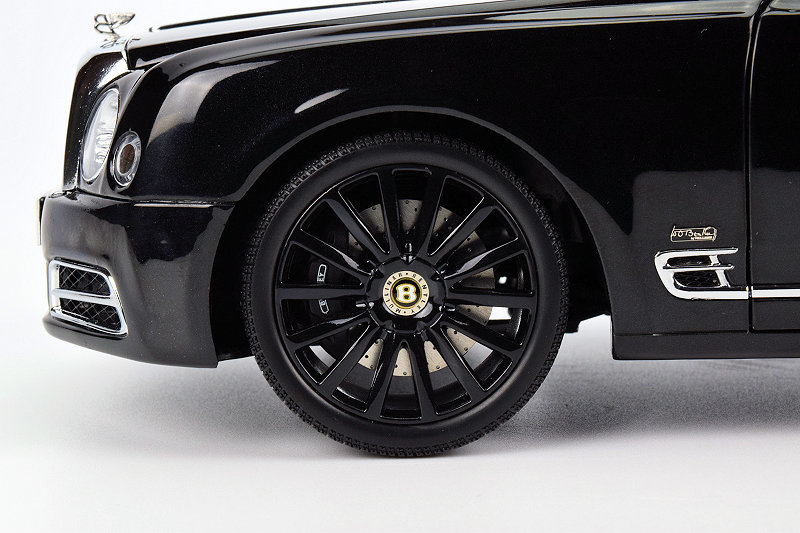 Another feature extraordinarily different on this special edition are the black twisted-spokes rims that not everyone seems to like. While today they are perceived as being too sportily aggressive on a luxury barge like the Mulsanne, Almost Real cannot not be blamed for a most truthful imitation of Mulliner´s modern interpretation of Mulliner´s black wire wheels of W.O.´s personal 1930 8-Litre; silver wire spokes would have stood out too bling back then and black just blended in more sedately with the body colour. No-one will find fault with the really drilled brake discs, black calipers or the wheels’ centres, though, where a gold-framed B marks the centenary occasion as on any Bentley delivered this year, but surrounded by a script “Bentley/Mulliner”, while Almost Real’s other Mulsanne’s don’t get the centennial gold rim. If it´s any consolation, the ordinary Mulsanne´s windows are not only framed in chrome but receive chrome B-pillars, while the W.O. has them discreetly deleted for more 1930s blackness. 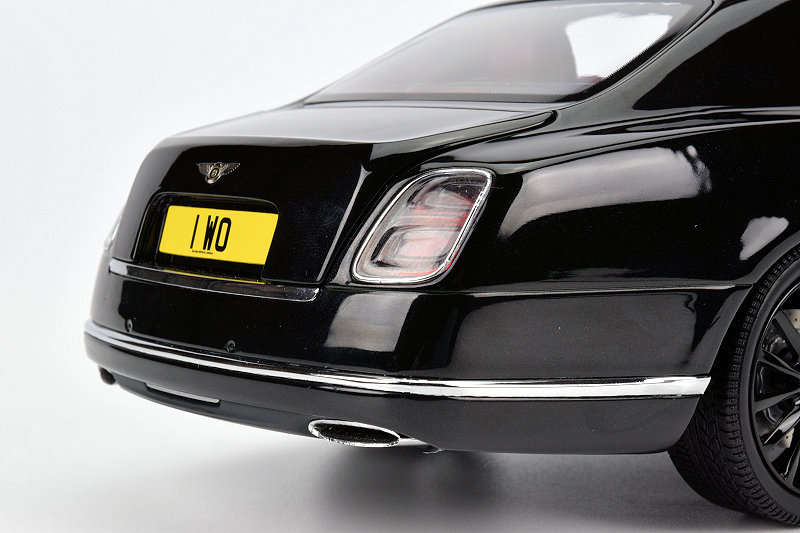 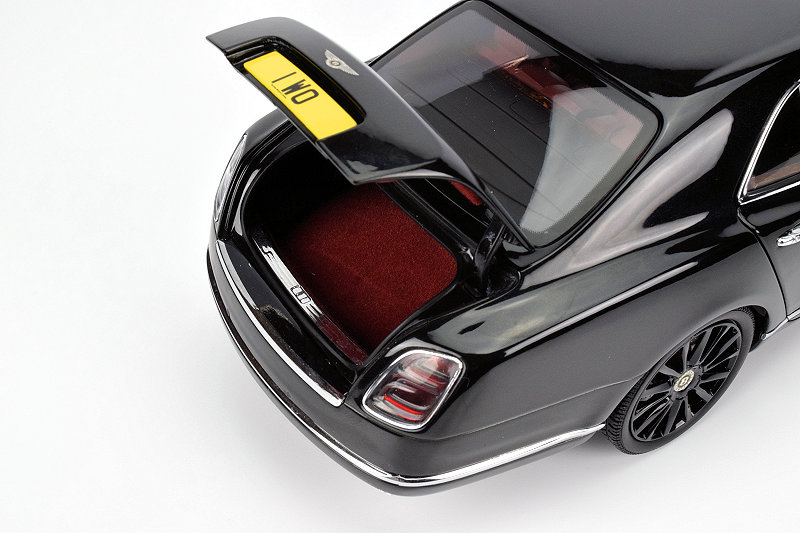 Moving around the rear end, we find more shiny chrome to outline the shape, B-sculpted tail lights with some good depth and Bentley wings on the boot lid that again have been gilded carefully for the anniversary like on any 2019 Bentley delivery. The only thing noteworthy of the open boot is that not only the trunk space is lined with carpet, but the inside of the lid, too. Don´t bemoan the dog legs, they are true to the original, I am afraid! 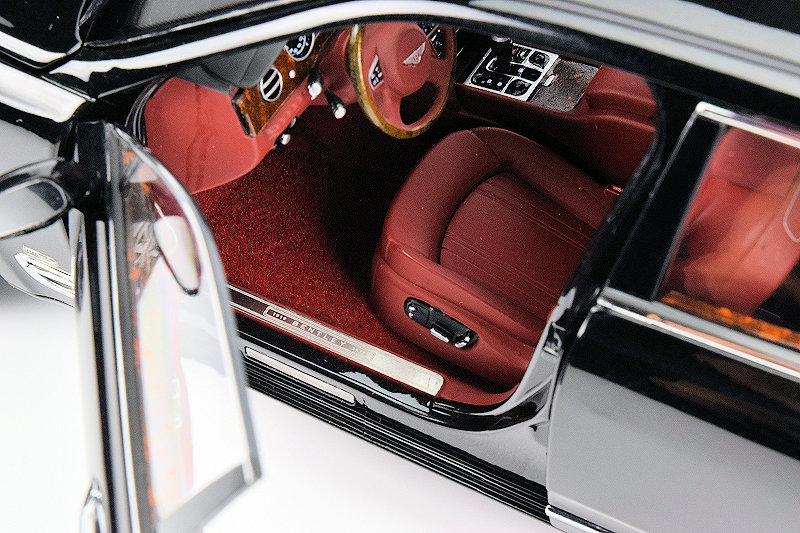 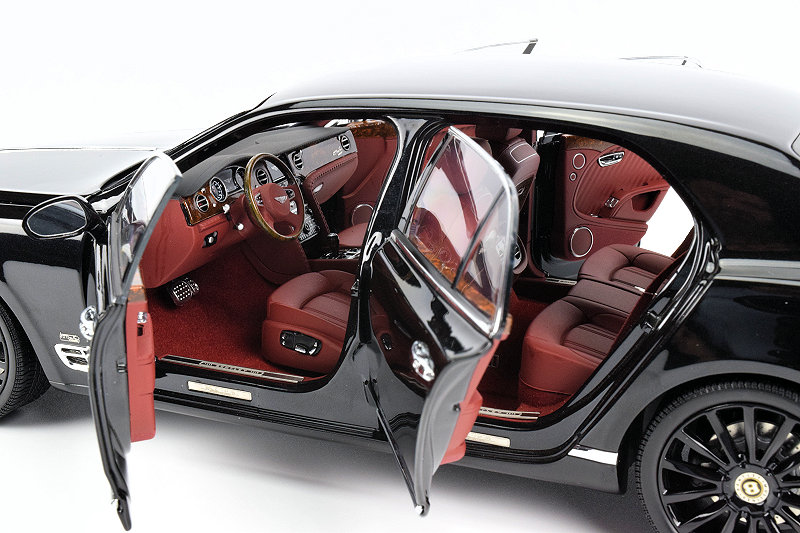 Inside the cabin, an opulence of red, wood and chrome greets you and oozes luxury that complements the more sedate, solemn elegance of the onyx exterior. Rich carpeting, fabric seat belts with photo-etched buckles and imitated stitching, e.g. on the dashboard, seem to be a matter of course, when the finely printed pattern of the wood positively stands out so much that you might overlook the depth given to the bull´s eye air vents that are not just print-on. A vertical treadplate in the driver´s door sill reminds us that this is 1 of 100 special edition cars and we find replications of “W.O. Bentley” embroidered signatures on each seat and as a photo-etched inlay on the passenger side´s wooden dash panel. It almost comes as a disappointment that the special edition´s centre piece, this sliced-up crankshaft of W.O.´s 1930´s 8-Litre Bentley, found as an inlay into the real 100 vehicles´ rear bench centre armrest is… well, let´s kindly call its absence “stowed away in the upward position”. It´s understandable that Almost Real in its present effort of consolidation did not make this detail along with the drinks cabinet, although we all know that they could technically do it. 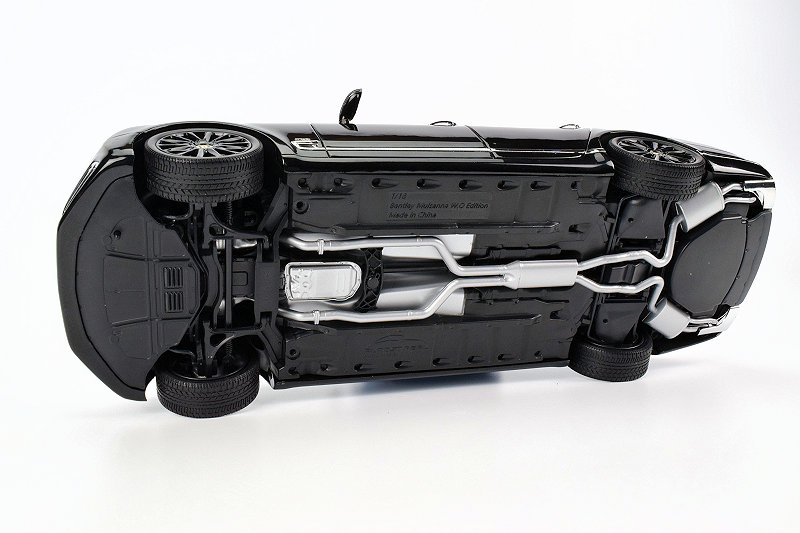 What Almost Real have given us in this present situation is all the more laudable. It remains a mystery to me why this particular centenary edition model (or any other Almost Real Bentley) is not available as one of the models or centenary items offered by Bentley´s own Bentley Collection merchandise, although they are officially licensed by Bentley. In fact, Bentley Collection has no current production Bentley in 1:18 whatsoever, only the pre-facelift Mulsanne Speed I reviewed on DiecastSociety.com earlier. Quite an oversight on their part and a missed opportunity in this centenary year, if you ask me. I feel nearly as privileged as the lucky owners of the real W.O. Edition who get a 1:18 8-Litre Bentley with their car. Wouldn’t it be great if you could buy Almost Real´s W.O. Edition and TSM´s 8-Litre from the Bentley Collection and put them on display side by side? Well, Bentley is probably not reading this. All the more I’d like to thank Almost Real for this great gift to any Bentley enthusiast to mark the anniversary of the brand. This model is an absolute must-have for every Bentley-themed model collection!

Find this and other models on sale now at AlmostRealModels.com