To the undiscerning eye, this is just a Mercedes S Class. But it´s not.  It’s the S Class’s evil brother, a brute in a suit (as Aston Martin calls its DBS Superleggera)… or (in this limited white edition) a dinner jacket. Brabus gives these a make-over, not just in terms of looks, but sends them to the gym, too, to increase the horsepower to 900 and 1500 NM of torque by increasing the V12 engine´s capacity and adding a biturbo (plus replacing a couple of Mercedes parts for something yet more solid to handle this monstrous power). Flexing its muscles, this will propel the luxury barge to 100 kph in 3.7 seconds and onwards to 200 kph in the same 9.1 seconds that my car needs to reach 100. Though sounding incredibly Hulk with its exhaust flaps open, it’s not all Mr. Jekyll, but very much under control, limiting top speed to a supercar-like 350 kph. 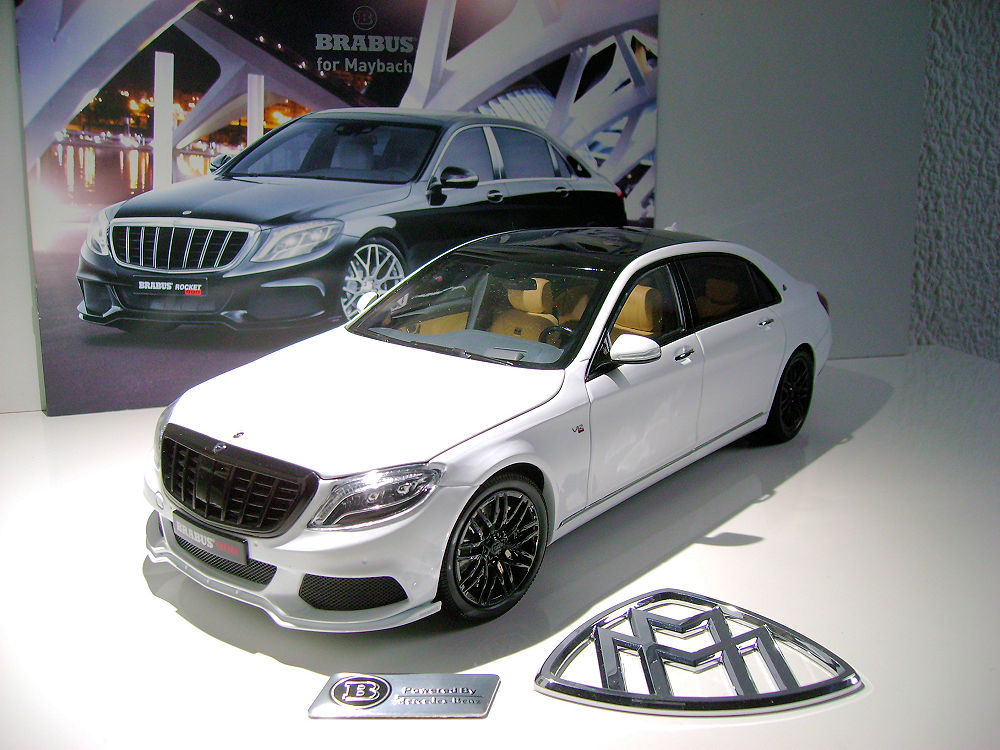 After taking DiecastSociety’s 2019 Model of the Year Award with a Brabus 4×4, Almost Real add yet another Brabus and seem to have taken the obvious step, given that they made the superb model (read review here) of the Mercedes Maybach S 600 on which this 2015 version of the Brabus is based. Indeed, many of the S Class’s parts can be (and clearly were) put to use again, so that exploiting an existing platform seems to be a no-brainer for a model manufacturer. But it’s not all just an easy matter of simply rebranding the existing model. The lower front end, the spoiler and air intakes, is so different that a new mould had to be used for the model’s main body. 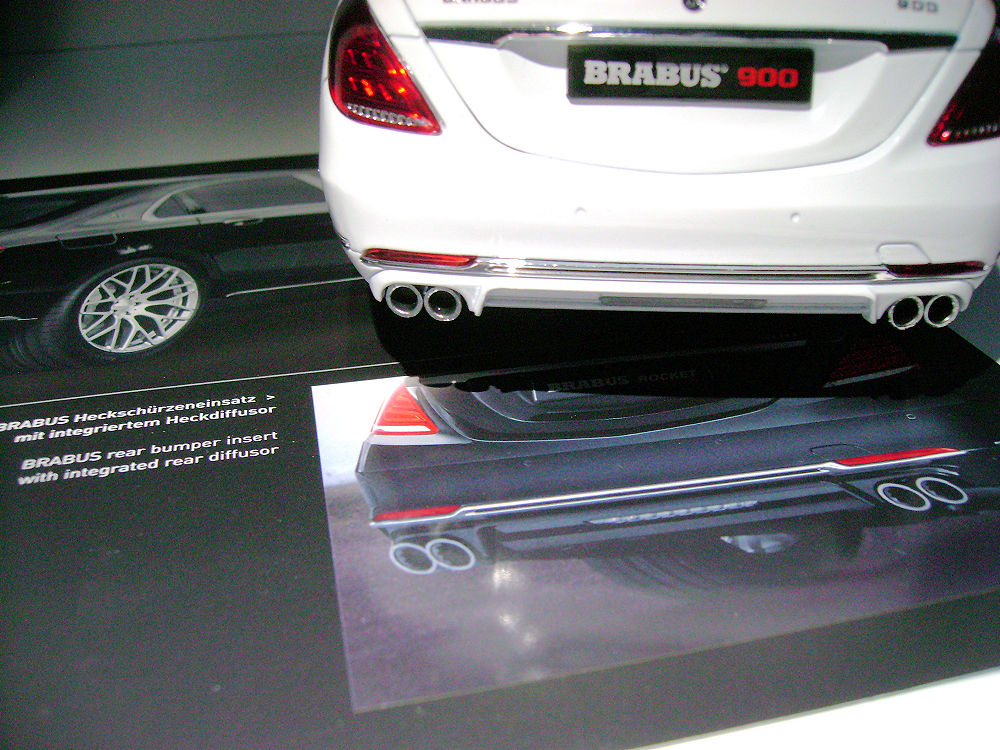 As so many parts remain the same, I’d like to refer you back to my review of Almost Real’s S Class and focus on the differences here. On the exterior, especially the black Brabus is so similar that anyone may be forgiven to mistake it for the S Class. For example, lights front and rear remain the same. On the rear end, the exhaust tips are round instead of square, and all the rest is just different badges. Upfront, the different front spoiler has larger air intakes given breakthru photoetched mesh and tiny Brabus scrips added on the lower spoilers’ side fins. The grille on the black Brabus is only slightly different in having the vertical bars in doubles and protruding across the horizontal bars, while the Maybach S Class has the horizontal bars doubled over the vertical ones. Creating more of a difference, on this white Brabus the black grille (and the contrast created by the black air intakes) really makes the Brabus stand out against its S Class sibling. Of course, the wheels have been correctly replaced with Brabus´ own forged rims and calipers. No upright Mercedes star mascot harbingers the car on the bonnet, but a flat Brabus badge sits in its stead. That’s all true to the original, as in the 2015 brochure. 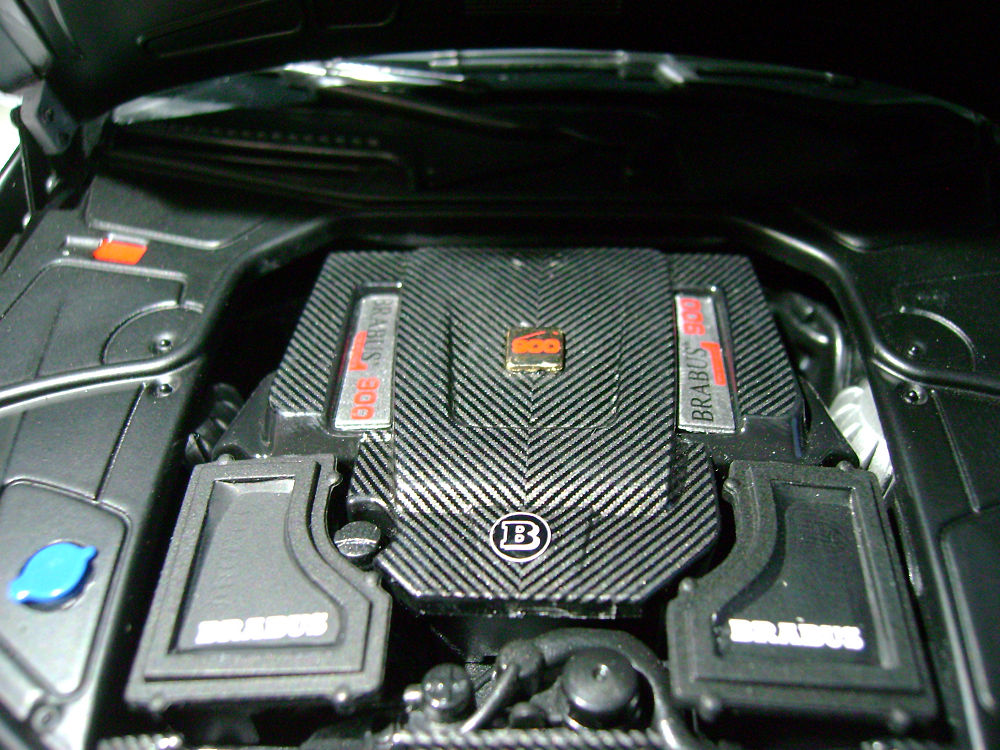 Under the bonnet that nicely lifts on struts and delicate hinges is where the difference really becomes obvious: The engine cover shines in carbon fibre weave replication and convincing Brabus badges. The few engine details could be more detailed and the giant twin nostrils with the white scripts do not make enough of a difference between the foam insets and the surrounding frames. A clear difference from the Mercedes V12.

Along the car’s sides, the model has taken over all the Mercedes chrome trim, especially the black version. While this white Brabus has the windows framed in black, the black one’s trim is all chrome. If you compare the model against the original’s 2015 brochure, the  “V12 900” badges, however, seem to be in the wrong place and ought to be on the front doors. Additionally, I suspect that the white version ought to have all its chrome trim in black, too. I  could be doing Almost Real wrong, though, as the only evidence out there is pictures of a single 2015 Brabus in white. I have reached out to Brabus about it, but they’re to busy with the Geneva Motor Show. However, at least the Maybach emblem on the C pillar, being a chrome double M for “Maybach Manufaktur” on a black surface, leaves me with the impression that it was meant for a black model as the original emblem does not have a black background plate (cf. the original part next to the model). Even if the chrome emblem does not have to be black for a white Brabus in real life, it shouldn’t be black at all and therefore nourishes my suspicions of this being a shortcut. 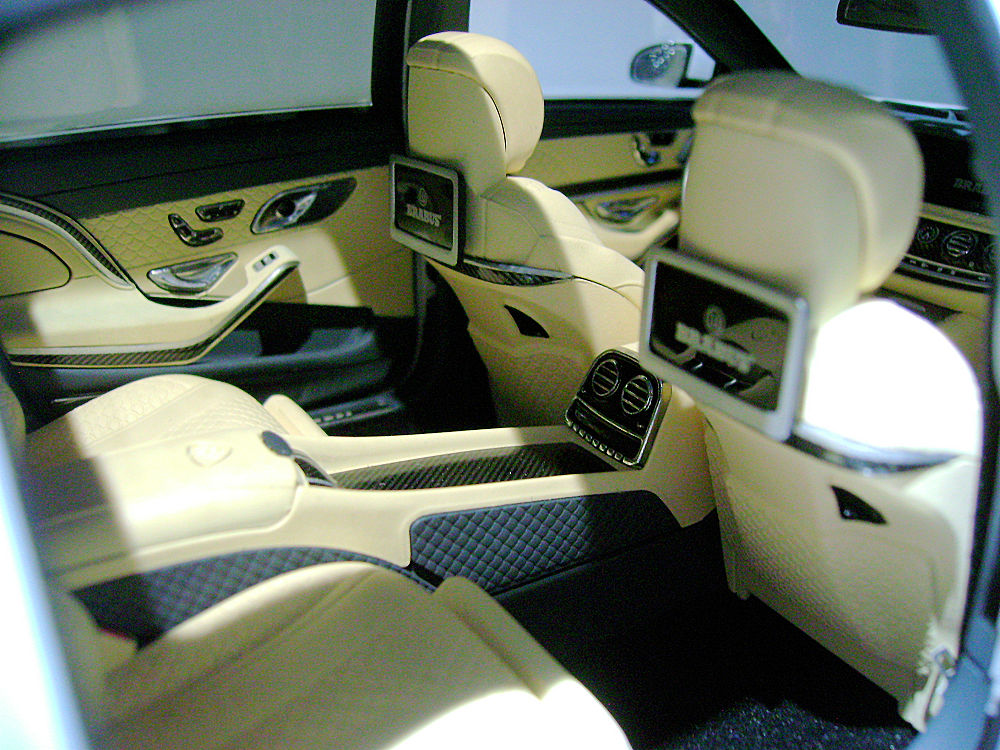 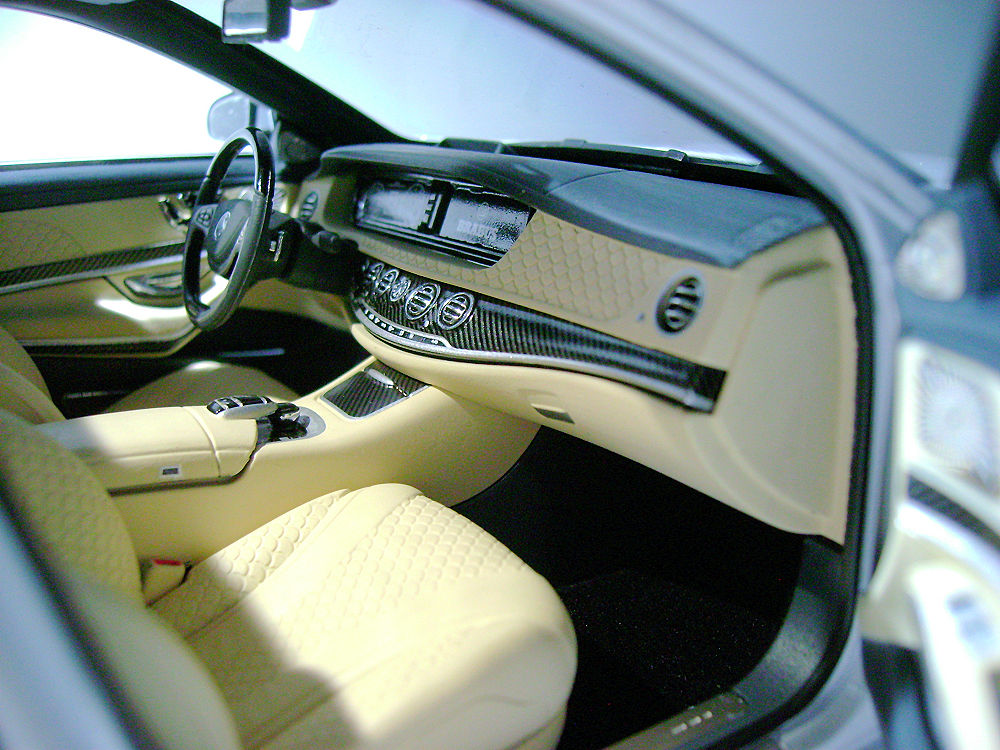 Moving on to the interior, the Mercedes star on the steering wheel is no mistake or shortcut, but true to the original.  Almost Real have even made the effort to give the upper end of the steering wheel a carbon finish. Nice! The same carbon finish lends a sportier look to the Brabus on all the interior trim work that clearly differs from Almost Real’s “ordinary” Maybach S Class. All screens show a Brabus logo and a Brabus treadplate greets at every door upon entry.  The seats differ from Almost Real’s S Class, too, in not only having the correct branding but more and more-finely quilted surface than its S Class counterpart. The quilting correctly continues on the sides of the centre tunnel, but not all across the footwell and floor that, rather untypically for Brabus, is merely carpeted. The same inside the trunk. Not impossible, but not really signature Brabus specification either. 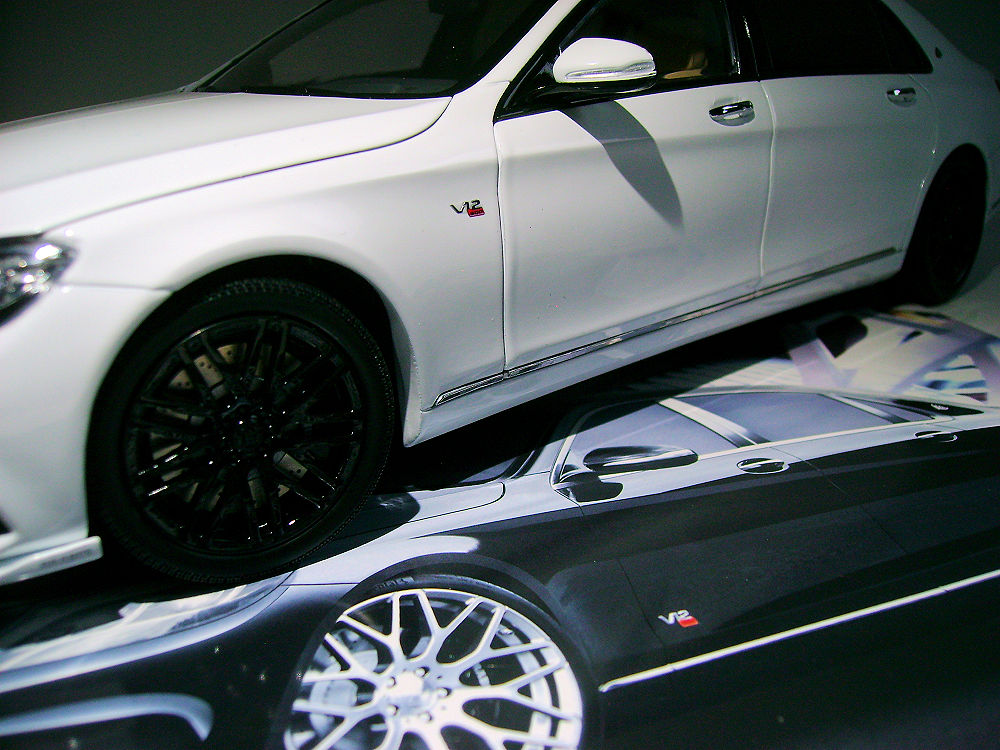 So, while Almost Real can clearly not be blamed to have simply re-badged their Maybach S Class and put on different wheels, but have clearly made an effort to make a convincing Brabus, some shortcuts have been taken, especially with the white edition, which will at least discourage a Brabus purist from buying.