We finally made some time to sit down and review the first model from Almost Real since the 2018 review of their fabulous and DiecastSociety.com 2018 Model of the Year award winner, Land Rover Defender 110 “Camel Trophy”.  The Land Rover was an outstanding piece, it brought us back to the glory days of scale model collecting, something truly missing in the overall hobby today…  An era when diecast metal, full 360 access and great details were all strong pillars.  Collecting today is becoming more static, less dimensional and somewhat soulless.  That being said the model under the microscope today is the new, and recently released 1:18 McLaren P1 GTR James Hunt 40th Anniversary Edition. 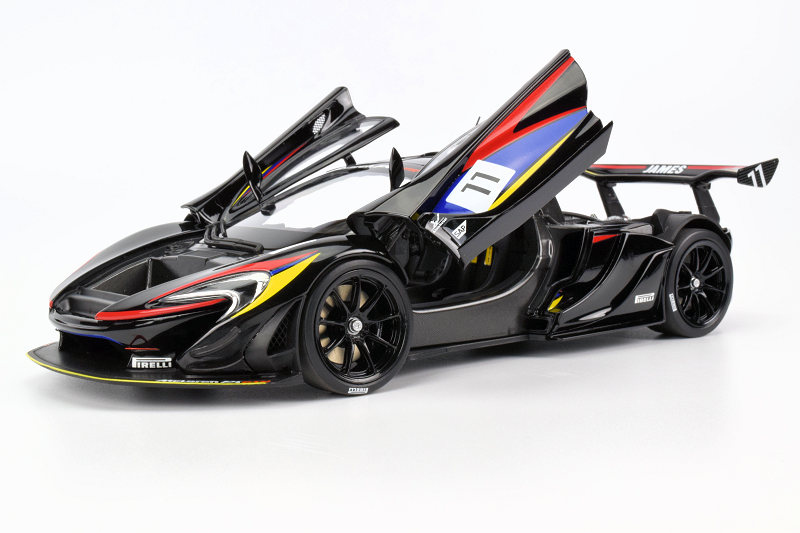 The model itself is crafted in diecast metal along with plastic parts.  Full access to the interior, front and rear make it a very appealing alternative to the AUTOart (sealed front and rear section) option released back in late 2017.  Note AUTOart hasn’t officially released or announced the same James Hunt car they have released the P1 GTR example in a handful of colour options.  Read our review HERE. 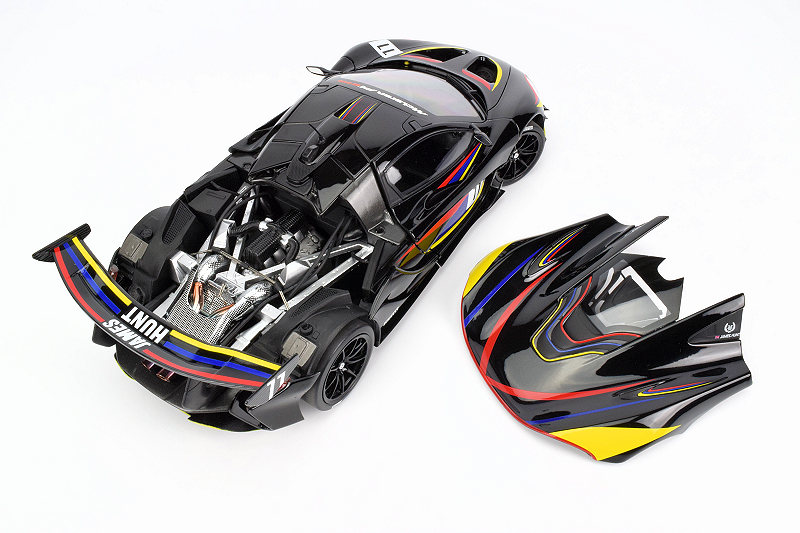 As you remove the model from the styrofoam shell you definitely notice the weight of the P1 GTR vs a typical AUTOart composite example – this one is the heavy weight! At first glance the model does look sharp, detailed, fined tuned and ready for business.  Exterior paint is sharp as well as the full-body arsenal of decals. 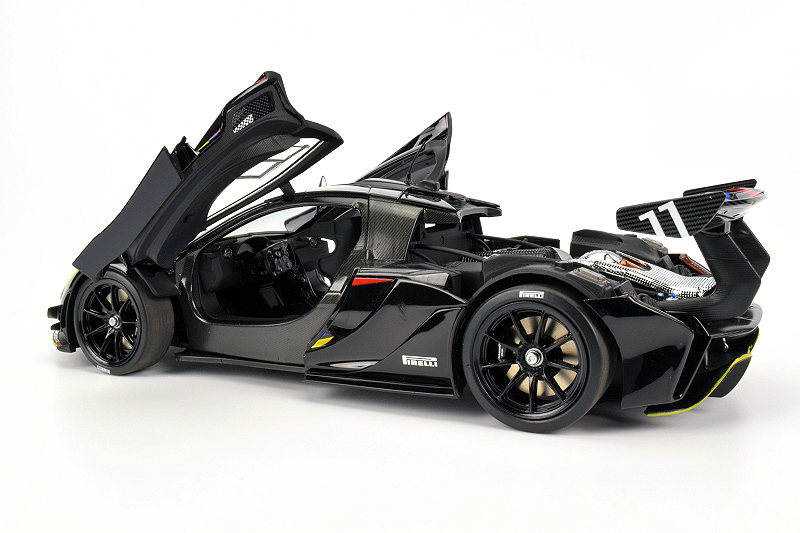 Based on the images we studied of the exterior we give Almost Real high marks for the overall execution in capturing the bodylines, the various styling ques of the design and transitioning them to scale.  This is no easy task.  We are no authority of McLaren or the P1 GTR in general, but we did see some difference in the James Hunt livery, some photos did show more or less decal work.  We have to assume there are slight differences or changes to the exterior since initial release, customer modifcation and so forth. 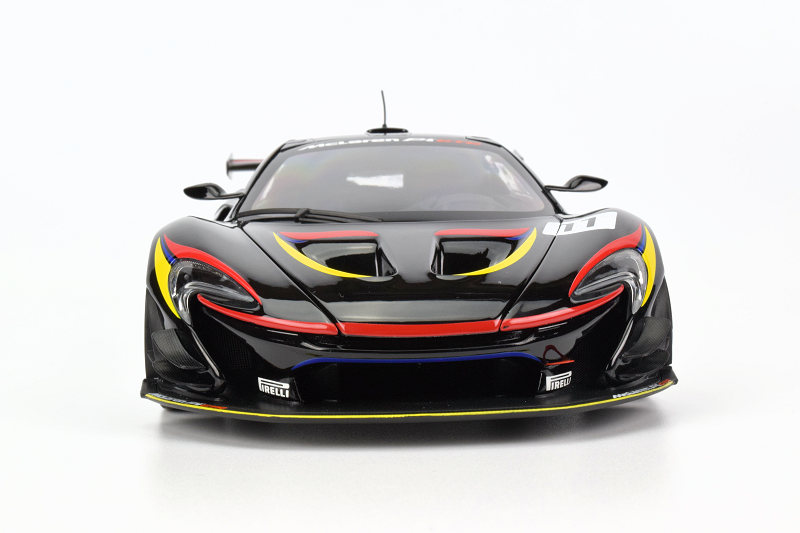 The front of the P1 GTR is met with a very large lower chin spoiler.  This and the side fins are crafted in moulded carbon fibre, similar to our friends at AUTOart.  All three lower opening go deep into the interior and do show some of the inner working of the cooling apparatus.

Another neat feature of the design is the detailed opening on each side of front facia assembly.  Opening are capped with perforated metal grilles. 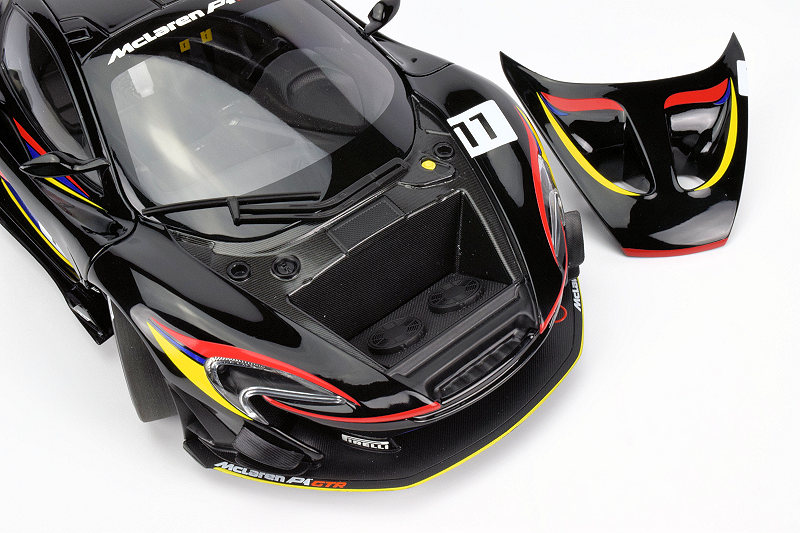 The front hood section is removable – panel gaps and shutlines are excellent on our example.  Removing and repositioning the hatch are completed with easy.  Before we comment on the internal section, we needed to mention the lack of quick-latching apparatus on the hood.  There is none defined; zero representation on front and rear.

Moving back to the front internals the exterior housing is executed in moulded carbon fibre.  Dual cooling fans are present but not much else.  Based on the photos, and there isn’t much reference material out there Almost Real missed a few key components.  Question, why would they provide access and not complete the look or not try to render at least a high-level representation of the 1:1 internals.  We’ll reach out to Almost Real for comment. 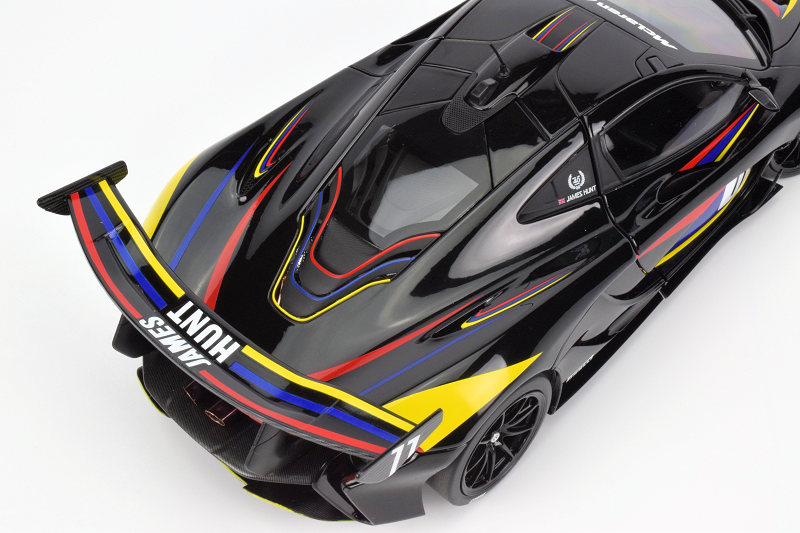 Moving to the rear the large upper spoiler takes centre stage along with the James Hunt livery in full affect.  Two large arms crafted in moulded carbon fibre connect it to the body/chassis of the car.  The lower section is nicely detailed to mirror the original.  Deep inside you’ll find average detail for transmission hardware – similar to AUTOart’s technique.  More photos are provided below. 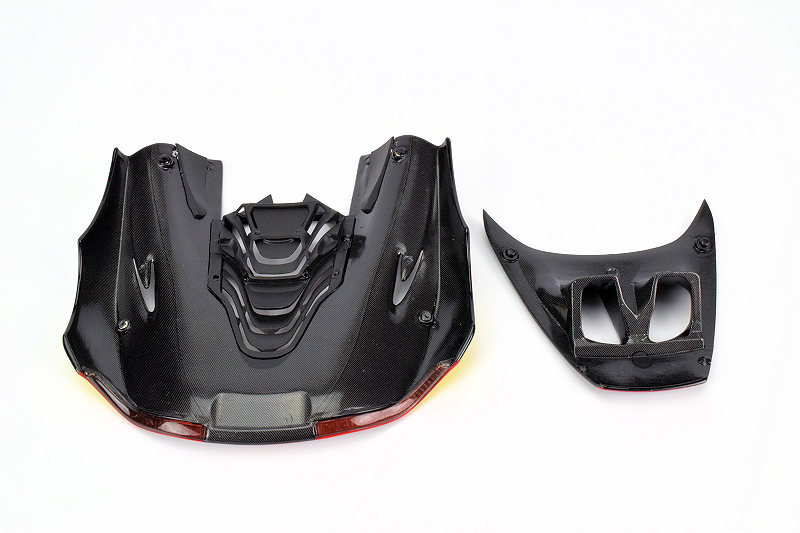 The rear hatch is removable, this is a good thing, since the AUTOart replica is sealed.  One neat feature from Almost Real was to cover the back side of the rear and front hatch pieces with carbon fibre weave.  It looks great and provides another level of realism.  Another treat is access to the apparatus underneath the two small access panels at about centre roof line position.  Each side is accessible.  Sorry, we have no pics to share as at the time of the photo shoot we thought these were static pieces. 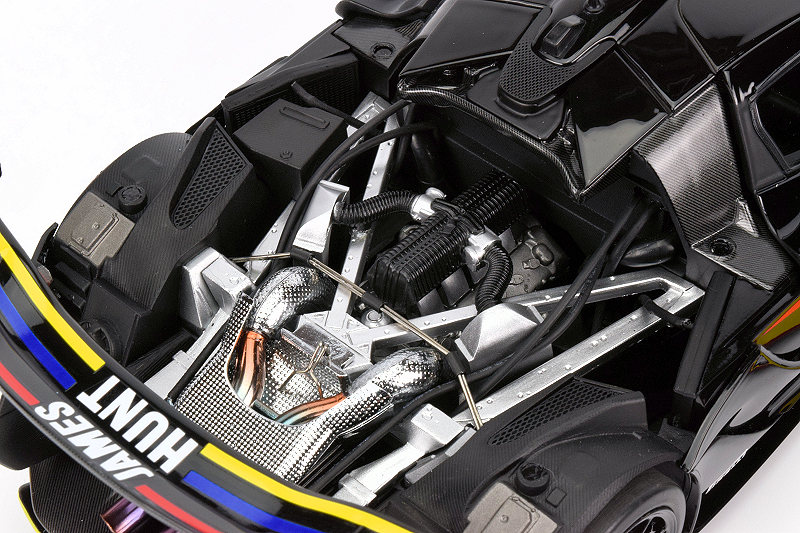 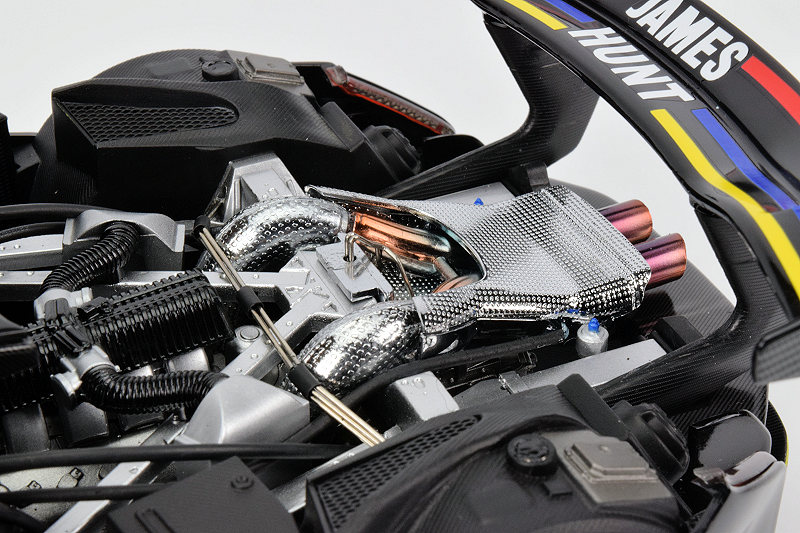 The motor isn’t as detailed as we would like based on the execution of the award-winning Land Rover Defender 110 “Camel Trophy” package.  It isn’t bad and it isn’t excellent, it is average with some levels of excellence, the best element in our opinion is the exhaust system; colouring and protective heat-shield are terrific!  The detail or effort of the motor levels off from here especially the surrounding components.  In their defense the McLaren if $60 cheaper retail wise than the Land Rover.  But from a collector perspective, I think one would pay $259 over the $199 price tag to achieve the best overall level of excellence throughout the motor the exhaust system one could provide.  Do you agree? 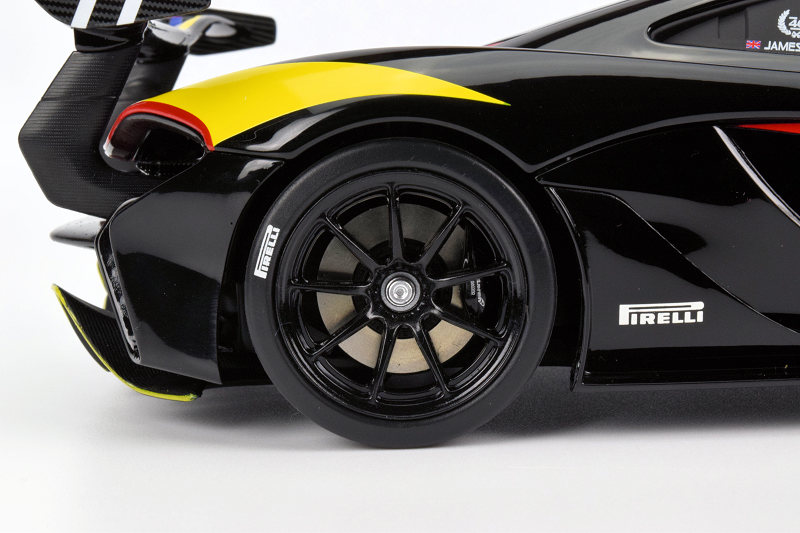 Wheels are nicely crafted in all Black with Silver centre nut.  Tires are low profile and feature Pirelli logo too.  In behind the rotors are solid units with Black calipers front and rear.  Both feature the McLaren logo. 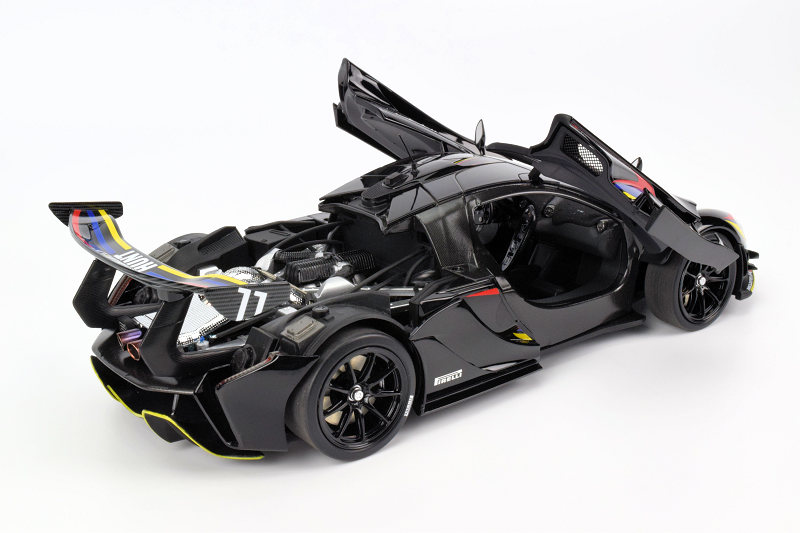 Getting into the interior is provided through two up-swing doors.  Operation here is flawless and both stay in any position you choose.   Perfect for photo shoots!  The doors themselves feature mesh opening in the upper section of the door (see above photo) , this feeds cold air to the monstor motor in the rear.  Well done!  The cockpit lining or outer shell is aided in decal sheet of carbon fibre – it looks very good.  Once inside the interior is bare bones and all business, the business of racing that is! 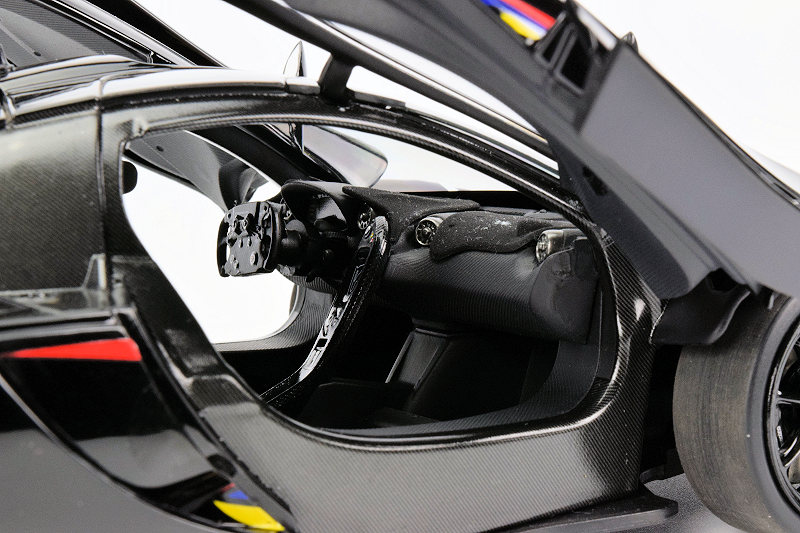 As for the interior it is completed in all Black with carbon firbre elements throughout.  F1-like style steering wheel, detailed centre console and dash, single seat with fabric racing harness are in check.   Our favorite part of the interior is the addition of Alcantara-like fabric pieces on the dash.  Definitely a cool feature that isn’t usually seen on many models we’ve reviewed.  Overall the interior gets a solid B. 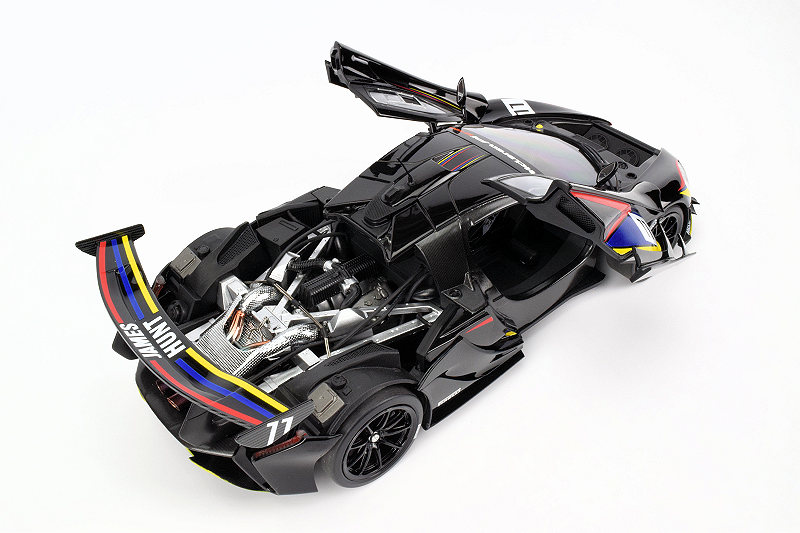 We’ll be honest, based on the execution of the Almost Real Land Rover Defender 110 “Camel Trophy” we were expecting a lot more from their McLaren P1 GTR James Hunt 40th Anniversary Edition.  Not that isn’t a terrific model or lacking effort, it just isn’t on par, that is the simple truth.

As for the comparison of AUTOart vs. Almost Real, the winner by defining margin is Almost Real.  The main reason, we have 360 access at a lower price point.  (we’d love to know what AUTOart is banking margin wise on these McLarens).  The remaining touch points between the two are similar or detail is exceeded by Almost Real.  In the end you decide what moves you best.

There also are some elements in the Almost Real presentation that makes one scratch their head, that for us is the lack of finish under the front bonnet.  Let’s hope future projects from the team continue to evolve and a greater focus of speed to market.  In our opinion Almost Real should not take lessons from AUTOart rather forge their own path.   We don’t want to see the inconsitancies from one release to another.  MAKE ALL YOUR MODELS AS BEST AS POSSIBLE STOP THE YO-YO EFFECT.  If this requires more time and a higher price point, so be it.  Be a leader and market share will follow.  Enjoy the pics!

Find this and other models on sale now at AlmostRealModels.com