Personally I think this is my favourite Chevrolet Corvette platform to date, the C3. The C3 owns its lines to the 1965 Mako Shark II project designed by Larry Shinoda. The 1:18 scale 1978 reproduction model here is a 25th Anniversary edition manufactured by AUTOart. It was released in 2004 with the window style box and re-released again with the styrofoam shell, which my model is the later of the two. It is an interesting story finding one… This one came up for sale on eBay from a Canadian seller, which I ended up winning the auction for $87, $101.95 shipped. It arrived two days after it was paid for, which is a record, but not without drama. Guess what the seller wrapped the OEM box is shipping paper, yes no secondary box. Instead of receiving a mint in a box model (which was never displayed) I now had to contend with a damaged box that extended to styrofoam core. Thankfully the model escaped unscathed! The seller agreed to his error, and thankfully I was more concerned with the model being mint than the box. 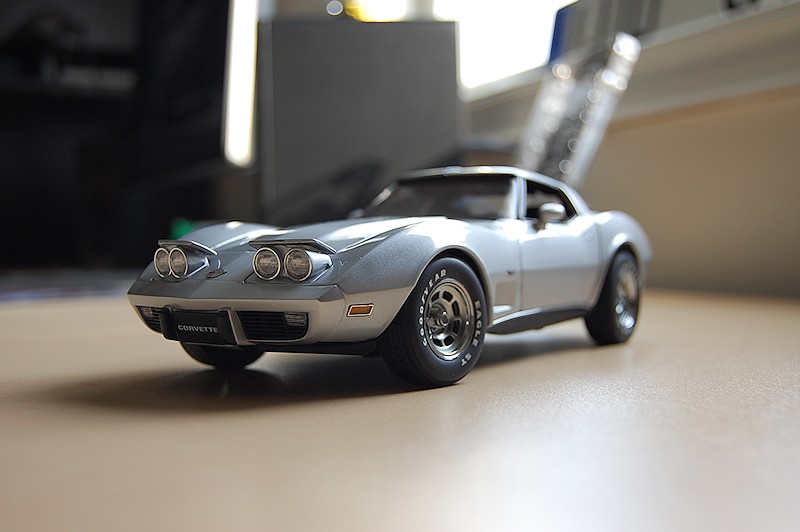 I’m very impressed with the model; right out of the box you know you have a solid well-executed diecast. Looks and feels like a quality piece, dare I say the golden days of AUTOart? Overall lines are beautiful, probably better than the original 1:1. The chrome work is very nice, lots of it here to enjoy. What impressed me is the small details you’ll see throughout such as the door handles and lock, the detail here is superb! Front and rear emblems are executed nicely too. Again the chrome work around the rear taillights is the finer detail that moves this model from good to great! The OEM alloy wheels have to be another reason why I wanted this model in my collection, just beautiful, represents the period of the seventies to a tee. The added touch of the white lettering around the Goodyear rubber is another one of those touches that moves this model from good to great! Well done AUTOart! 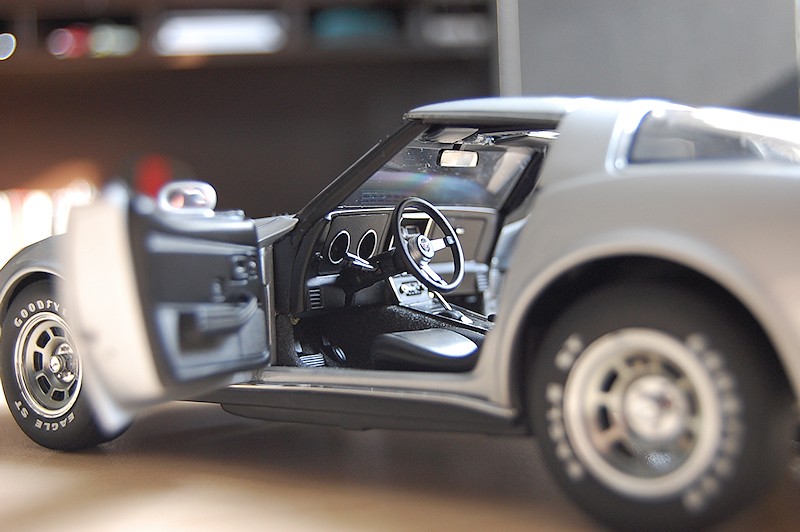 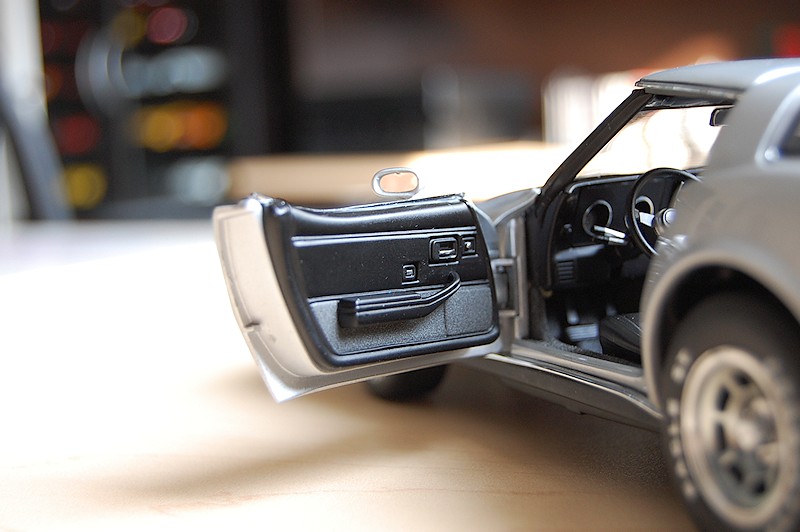 The interior is nicely done too. The chrome does make another appearance here and is well executed and works well with the mostly black interior. The t-roof is removable; it was a bit of a challenge to remove the two pieces though. Word of caution to all, I broke one of the small clips underneath the t-roof when trying to re-install them, be careful! Carpeting is available here with Corvette etched on both the driver and passenger side footwells. Carpeting also extends to the rear. A nice touch here is the harness I believe that is used to secure the t-roof during transport. 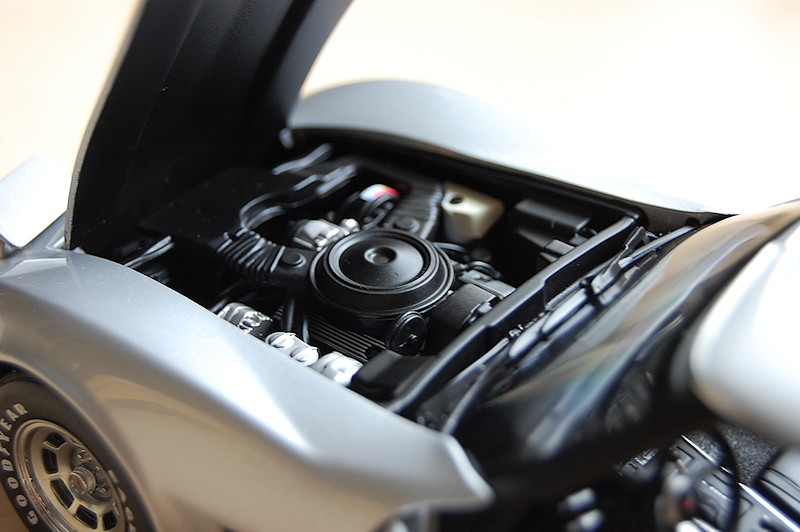 The engine appears to have all the elements to the original 1:1 in place, but I’m no authority of Corvette so please let me and others know of any misses. The detail is nice and the forward opening hood mimics the 1:1 nicely. I do wish we had the hinge work we’re accustomed to seeing on new AUTOart releases but nonetheless it works! Motor detail extends to the undercarriage. I love the blue painted block and detail of the transmission and dual exhaust. Nice work here AUTOart! The headlights are operational and work flawlessly. It’s funny though AUTOart provides the end-user with instructions and the key to open and close them, it wasn’t required for me. I rather have instruction on how to remove and install the t-roof! 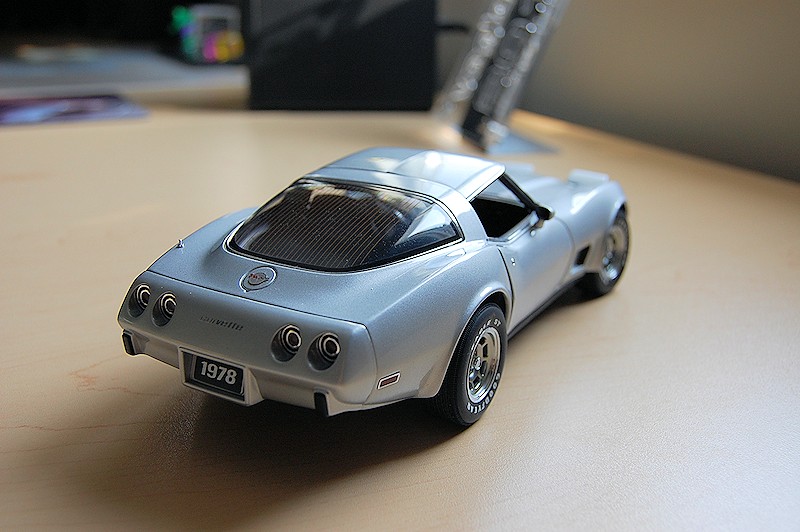 This model was a true pleasure to review and an easy one to recommend. I can’t really find anything negative to say about it. My only beef would be the clips to secure the t-roof bits. If you’re a fan of Corvette this 25th Anniversary model is a must for your collection. Enjoy the pics! 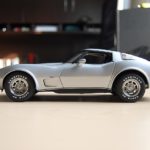 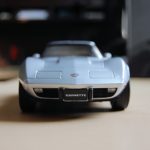 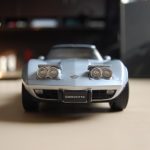 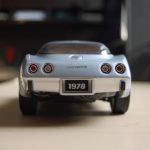 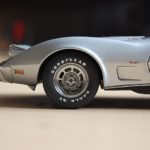 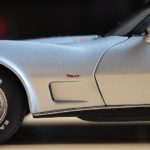 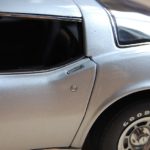 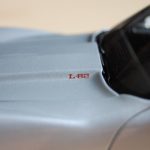 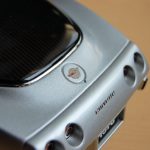 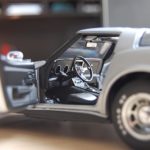 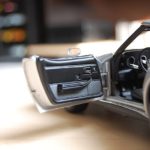 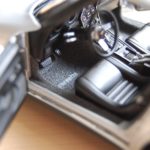 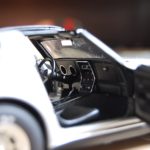 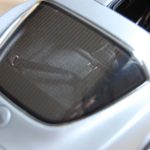 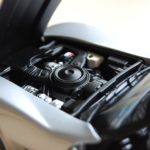 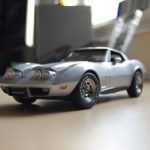 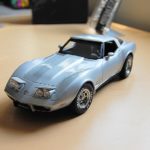 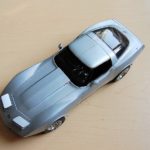 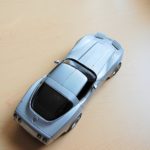 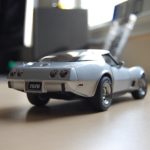 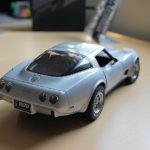