One of our favourite models of all-time is the 1:18 scale Dodge Viper SRT-10 from AUTOart.  Over ten years old, and at the time not one of their best-selling or more influential models.  It was a hidden gem!  And if you have one in your collection you do understand.  The Dodge Viper SRT-10 is beautifully executed from head to toe.  The wheels package to this date is some of the best stuff from any manufacturer.  So good, in fact, it looks like the scale wheels were cast aluminum.  Not to mention the supporting cast of the caliper and rotor package.  On-par too.

In early 2019 at the German Toy Fair, AUTOart announced another run at the Viper with four new models to come, each representing a last hurrah at a special edition from Dodge.  The first of these to hit the market is the Dodge Viper 1:28 Edition ACR 2017.  This particular car pays homage to the production car lap record (1:28.65) set by a Viper ACR at Laguna Seca Raceway in 2015 driven by Randy Pobst. The Viper 1:28 Edition ACR differentiates itself with extreme aerodynamics package, carbon-ceramic brakes, Black exterior with Red ACR stripes and a serialized instrument panel 1:28 Edition badge. 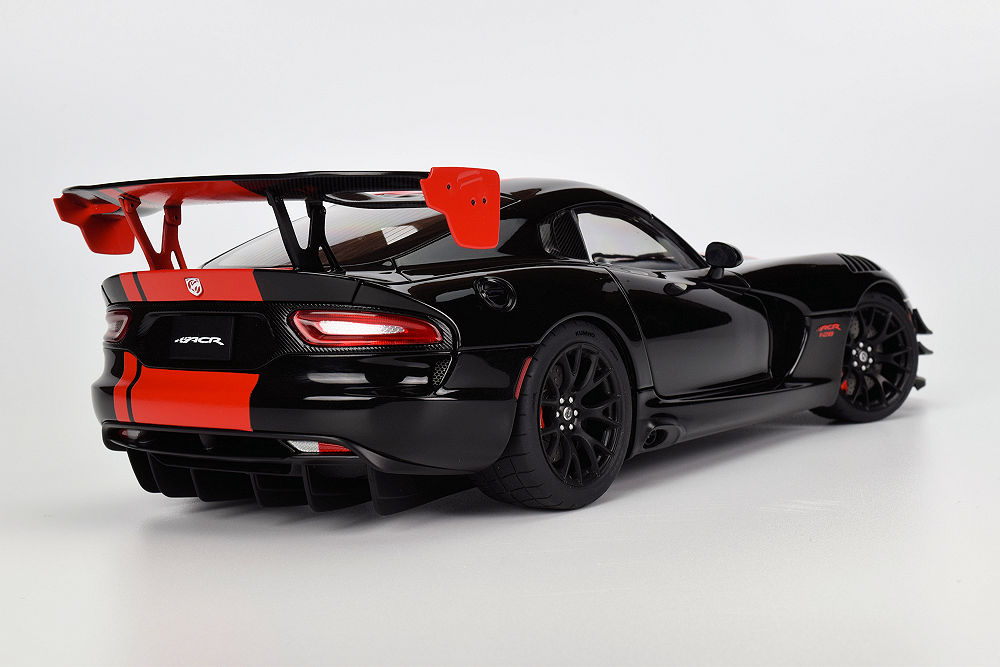 The exterior Black paint is meticulously applied with an elegant finish, we see no immediate flaws. The shine/gloss is impactful to say the least.  This success is short-lived as the Red stripping is achieved with decal/clear.  There is no issue with their decision with the use of decals, the issue here lies on visual pitting or texture effect that is present throughout the Red.  Hard to see within the available photos but it’s there. 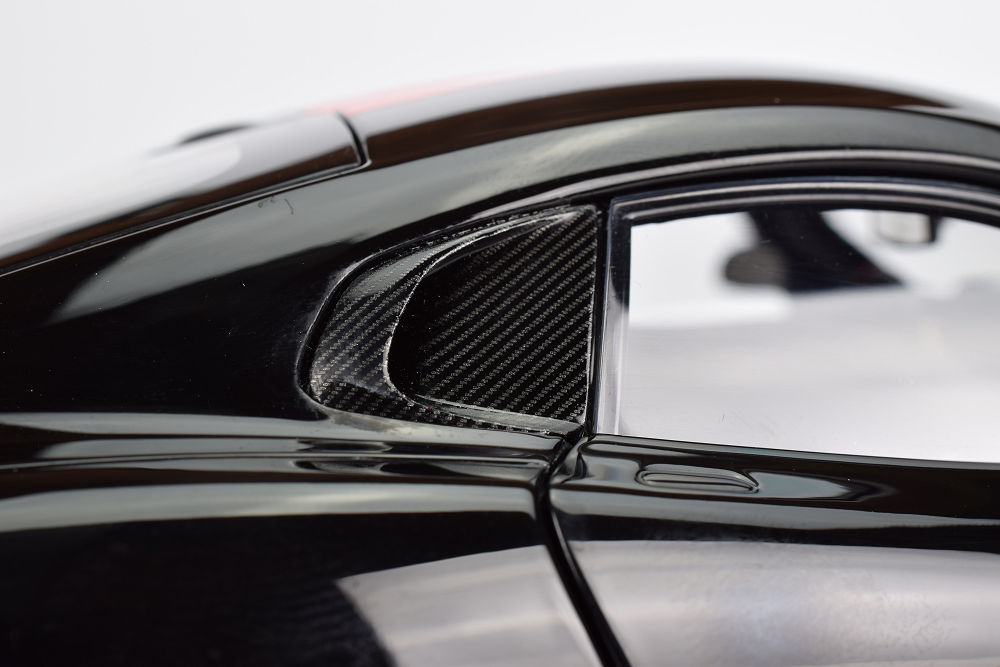 Genuine marks to AUTOart for capturing the exterior design into scale.  In our opinion, their overall execution is definitely on point.  Some exterior elements we like.  Large cooling ducting just behind 1:28 side decal is capped with metal perforated grilles.  Nice use of carbon fibre with the opening just behind each door.  They are completed with a gloss finish.  If there is one small concern, we don’t notice the gun-metal like finish that should be applied to the gas filler cap.  There is no contrast from the Black Gloss. 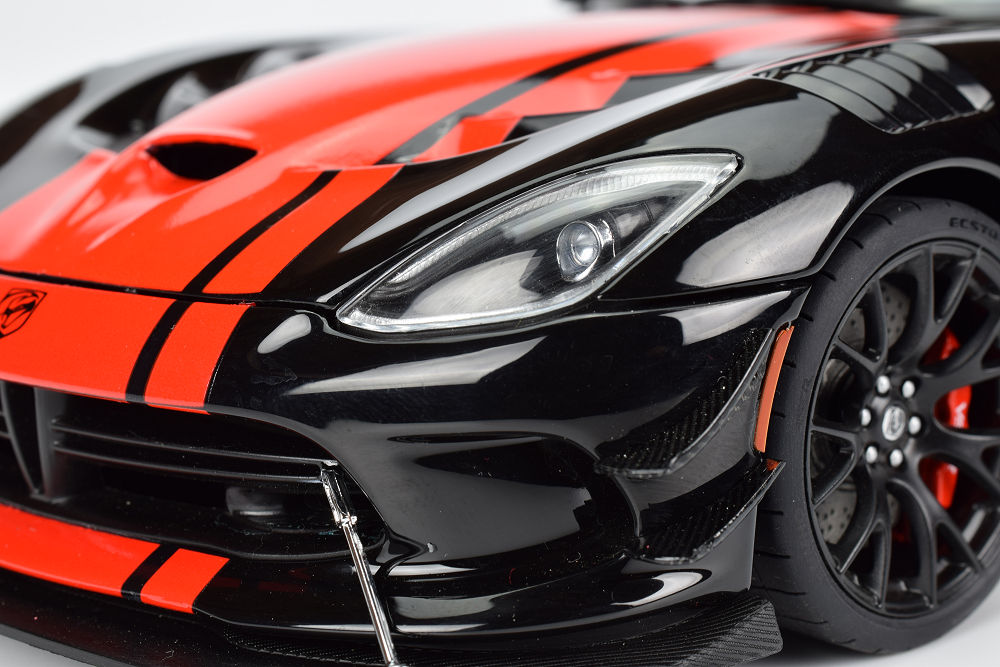 The front of Viper 1:28 Edition ACR features an extended lower lip.  Adequate marks here, however, AUTOart missed some of the transitional detail of the upper and lower chin spoiler, one being the rivets integrating these components.  The canards on the sides are detailed with tampo carbon fibre, not too shabby, however lower spoiler section resorts to the moulded carbon fibre look. 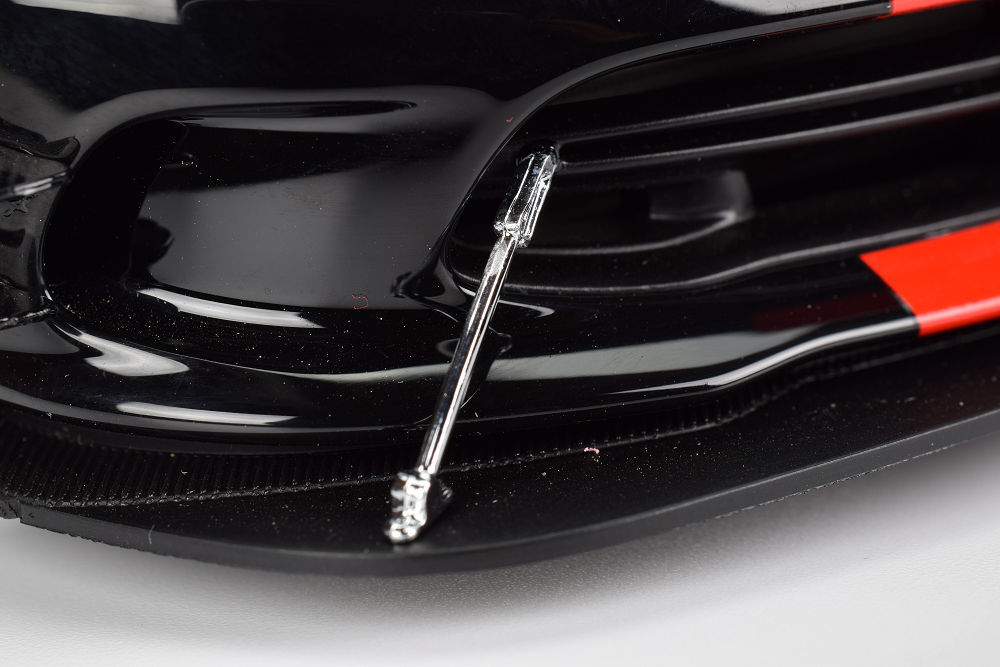 Headlight are part of the forward sweeping hood.  Detail of these is particularly good with the perimeter LED detail available.  The hood section highlights full metal, perorated grilles, six in total.  The centre scope is open to the internals as well as the gill-like feature on each side.  Just brilliantly precise. 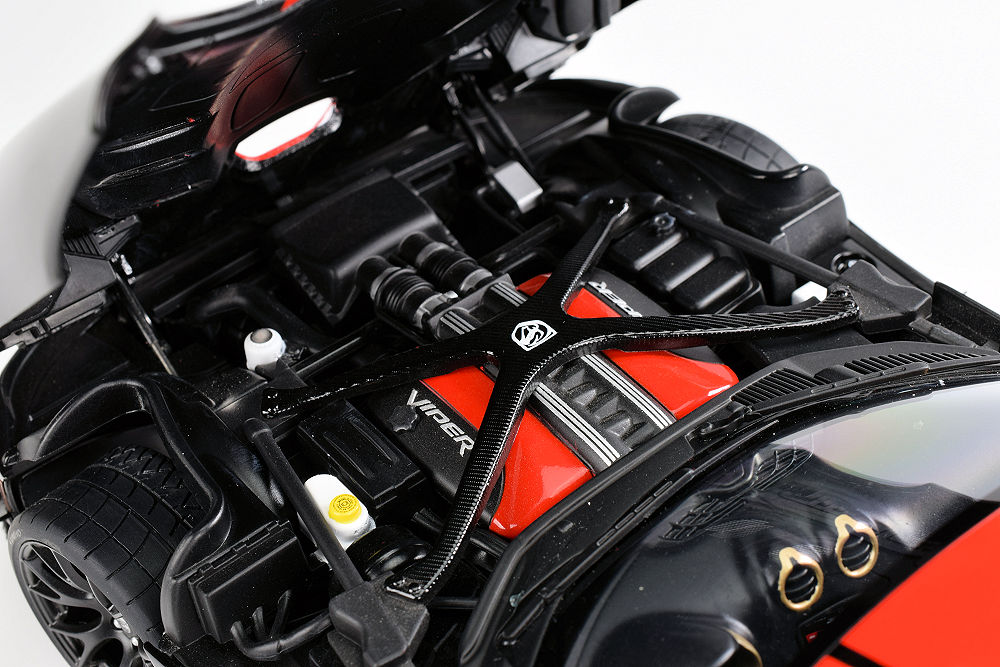 The operation of the forward sweeping hood is flawless and remains in the open position without issue.  Inside the motor is revealed, the detail is satisfactory with colour aiding the upper motor section and few random bits that make up the surrounding party.  Nothing over the top but does accurately translate the original.  One thing we need to question, is the upper tie cross-bar, is it accurate in Black carbon fibre as shown or should it be painted is in Silver? 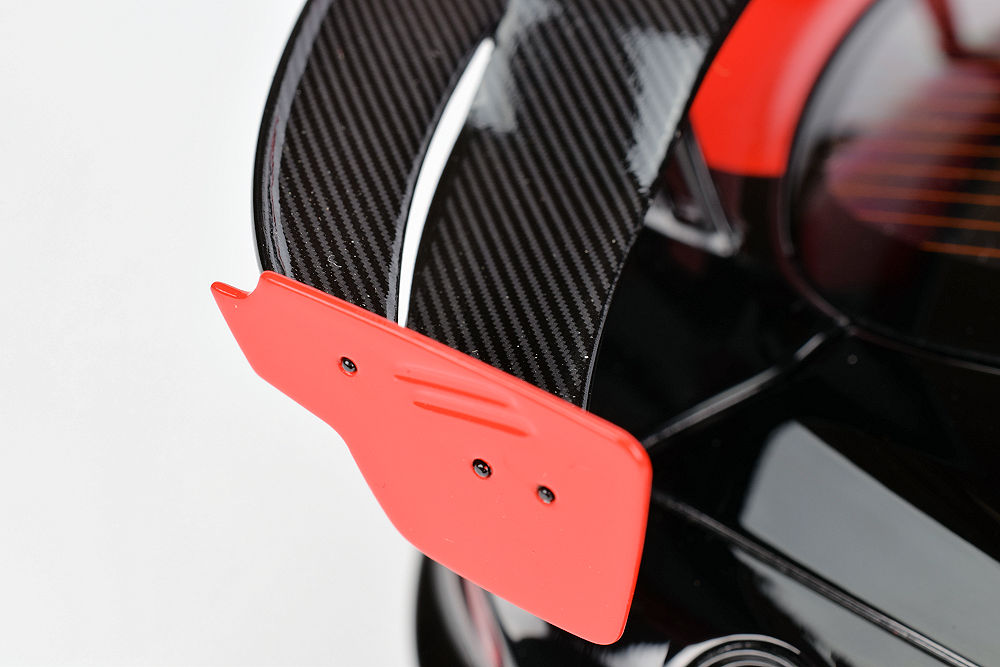 The rear is dominated by a massive wing.  It is tailor-made to the original.  Nice work on the carbo fibre detail and AUTOart also shows the two slots, though not fully open through the material (scale limiting possibly) and appliable hardware on each fin.

The lower section is again on point.  Small opening on either end features metal perforated grilles.  Taillight are accurate with produced with quality materials.  No exhaust tips here, they are vented from the sides of the car. 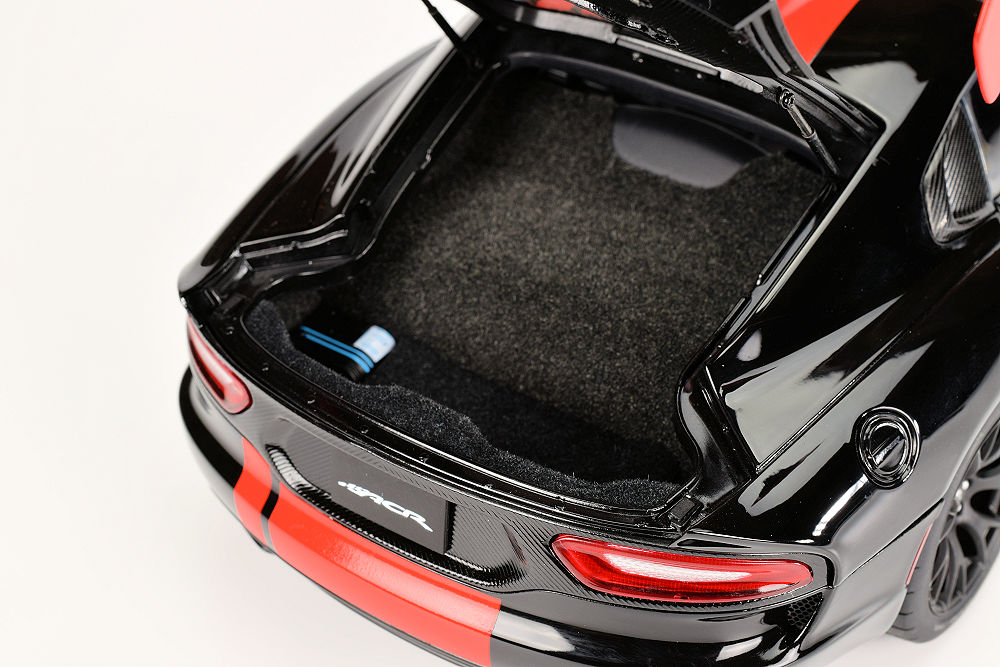 The hatch is accessible, two struts support the lid.  Inside the storage area is fully flocked.  It definitely looks sharp!  There is some of device is found in the lower-left hand corner as shown above, we’re not Viper authorities, so we’ll discount this as some sort of tire aid? 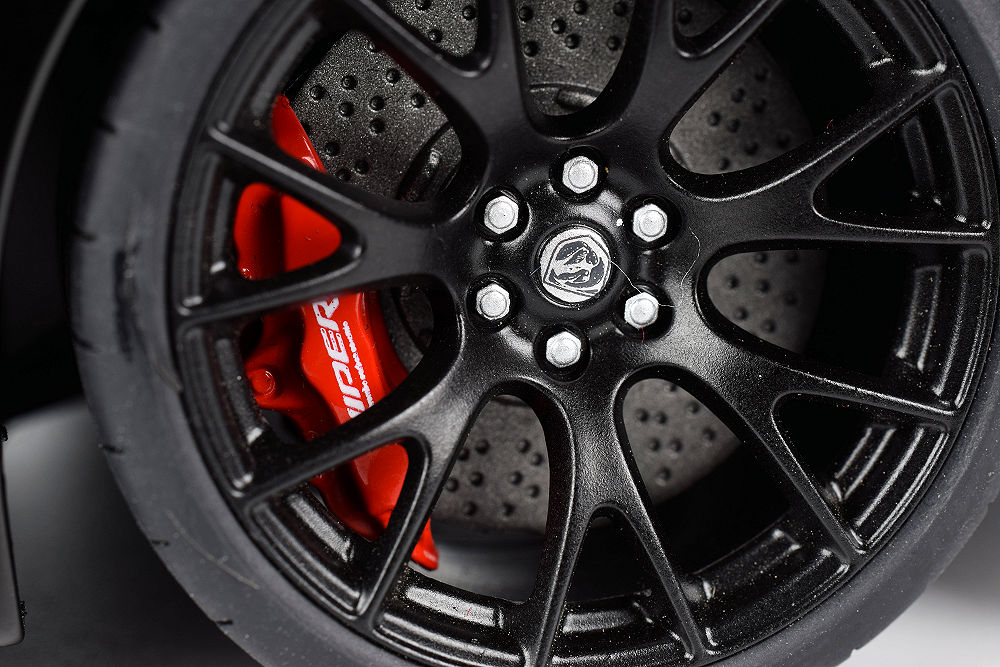 Wheels are painted in Black, the only paint here are the centre emblems are six surrounding wheel bolts – these are nicely defined.  Each tire receives full lettering.  The supporting staff behind is well-appointed (not as good as Dodge Viper SRT-10) and the massive Red calipers add the additional pop with the all-Black exterior.  AUTOart also dialled in the stance perfectly, precise and aggressive! 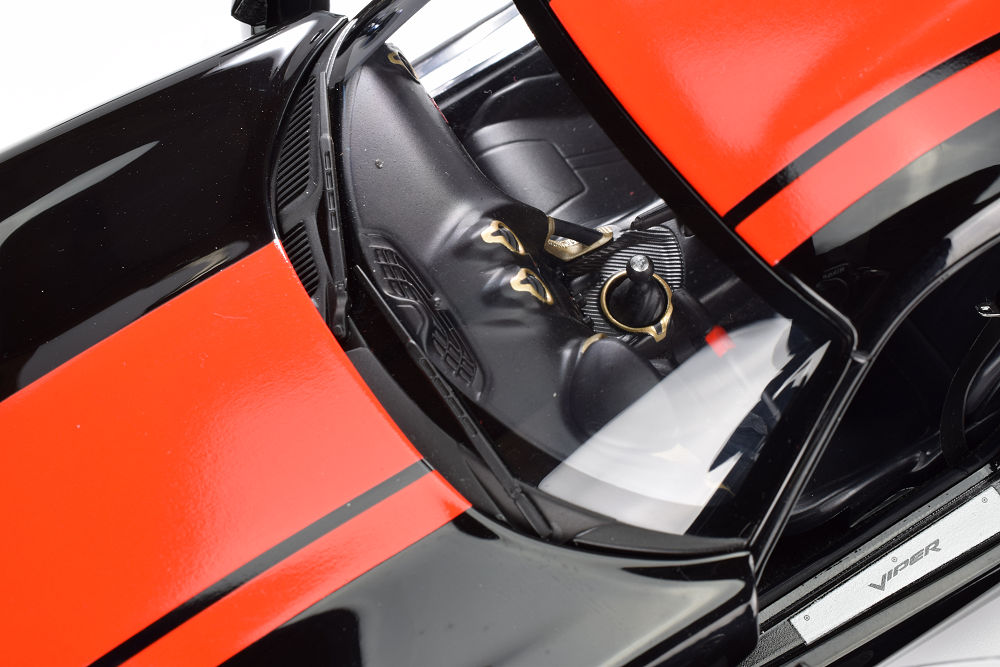 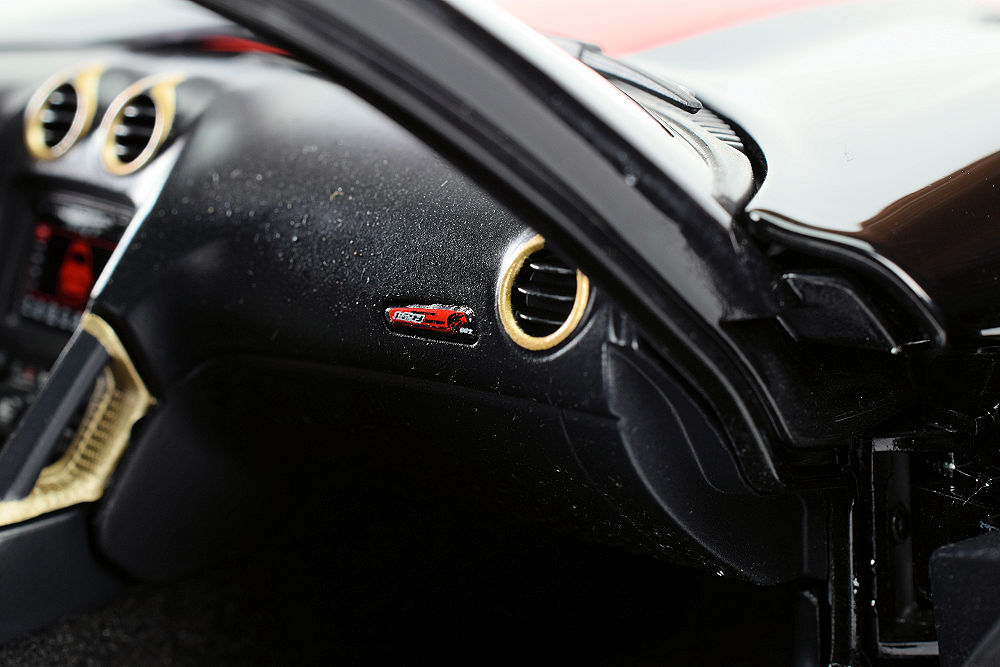 The interior is one of the better-executed interiors we seen from AUTOart are of late.  Most if not all the applicable detail of the real vehicle are present.  A few items we like to mention are the flag work pattern within the door cards, gold trim throughout the interior and panel 1:28 edition badge.  All the remaining sub-ingredients are present too.  What is not translated to scale is the Alcantara textures or look from the original.  Overall, just fabulous! 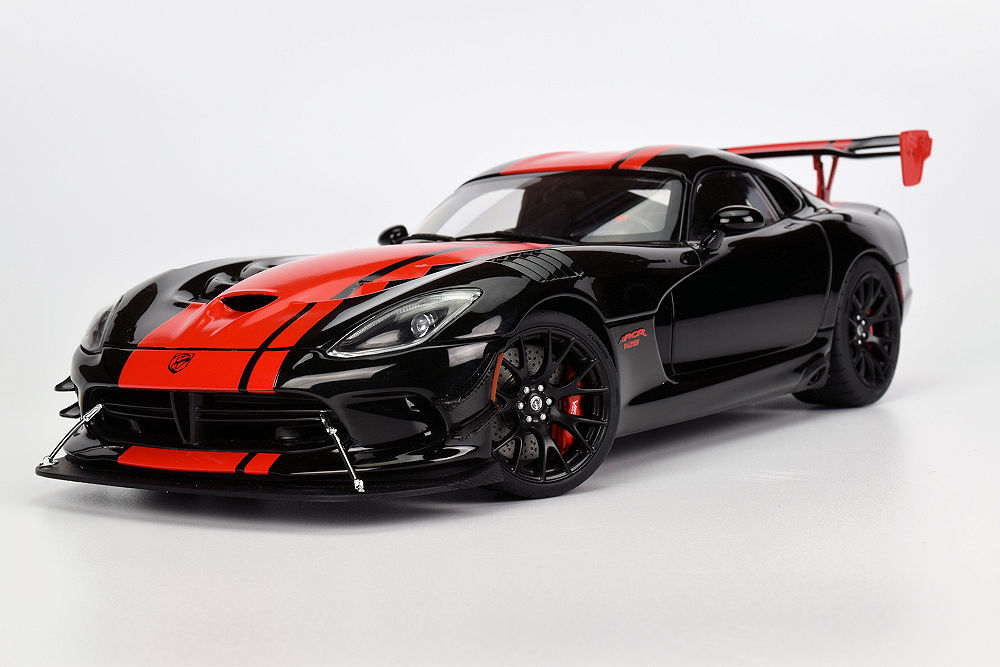 Its been many years since AUTOart defined a Viper in scale. The latest offering of the 1:18 Dodge Viper 1:28 Edition ACR 2017 is surprisingly good.  The unspoiled exterior (less the Red stripping), front sweeping hood and distinctive interior make for a well-rounded replica.  This one comes highly recommended.  It may have a few concerns and possibly not live up to Dodge Viper SRT-10, well at least for the wheel package wise but it sure comes close.  We’re looking forward to the future releases of the Viper, and you should too.  Enjoy the pics!