The latest addition is the AUTOart Lexus LFA Nurburgring.  Already owning the standard edition, the latest variant on this Lexus supercar was a must-add.  What is new at first glance are the honeycomb style wheels, fixed rear carbon fibre wing, and front spoiler and aerodynamic splitters.  There are also four colour choices offered by Lexus; black, white, orange, and matt black.  I went with the matt black for two reasons it is a $20,000 option from Lexus and it provides the sinister look I want for a car pushing the performance limits. 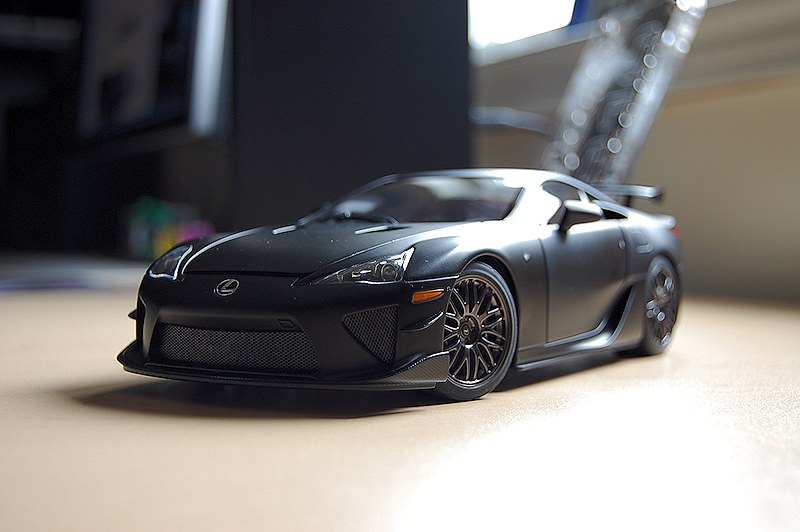 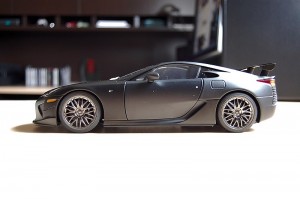 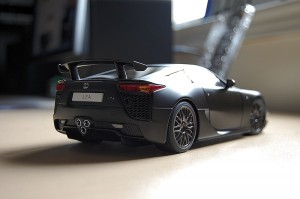 The exterior is much the same as the standard LFA.  As mentioned above the biggest changes are the wheels (wouldn’t be my first choice) and the rear fixed carbon fibre wing.  But there are some subtle updates that may be overlooked by many, which I’ll detail below.  In tradition, AUTOart has executed the overall body lines of the Nurburgring car well, as are the panel gaps.  The model itself presents no issues.  The matt black paint is nicely executed as well; it adds a nice transition to the carbon fibre work that is very prevalent throughout this model. 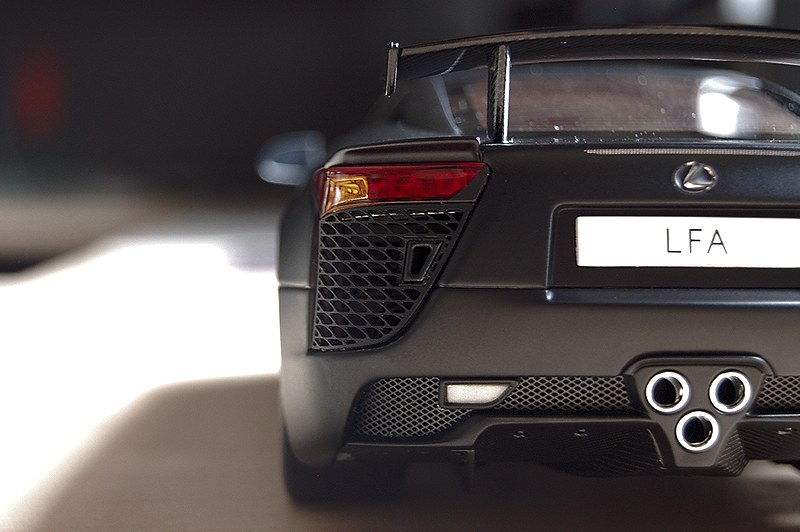 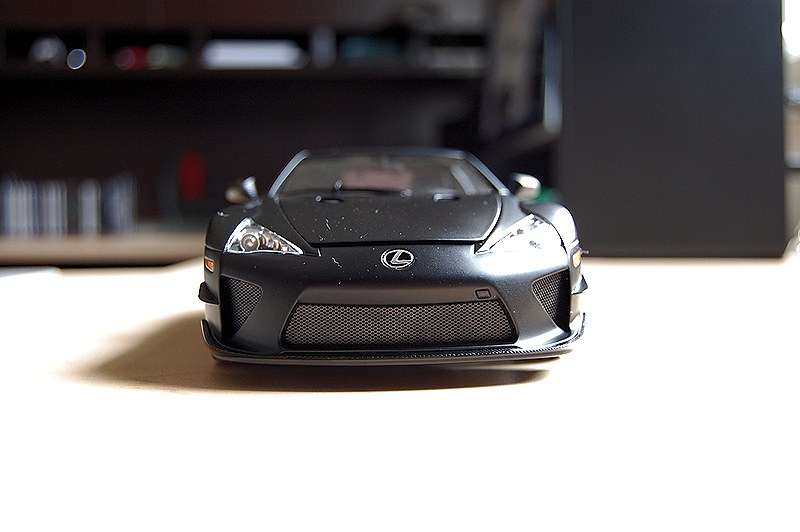 One thing you may not notice at first is the updated rear grilles; the original LFA design featured solid bits while the Nurburgring is perforated.  Thumbs up to AUTOart to making the change and listening to us collectors!  Also if you look closer at the rear taillights the above panel on each side features an addition of a subtle spoiler incorporated into the sheet metal.  A detail that lesser manufactures may chalk up as optional or maybe missed oversight.  The front fascia features a lower chin spoiler and aerodynamic fins.  The chin spoiler could have used a little more finesse as fitment is slightly off on the driver’s side. 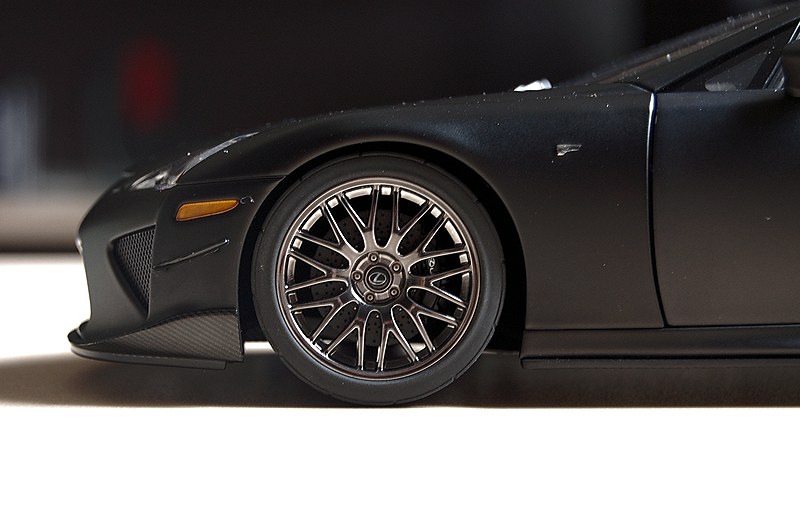 The wheels are nicely executed and seem to scale.  They are painted in a black chrome-like finish.  Not my favourite choice of wheel design, I just don’t feel they work well with the lines of LFA.  Mated with a detailed caliper inscribed with the Lexus logo and large rotor all work well together to add to the realism of the model.  One thing I like to mention is all the photos I’ve seen of the LFA Nurburgring car feature yellow calipers.  I do wish AUTOart would have gone in this direction, as the yellow would have contrasted nicely with the matt black exterior. 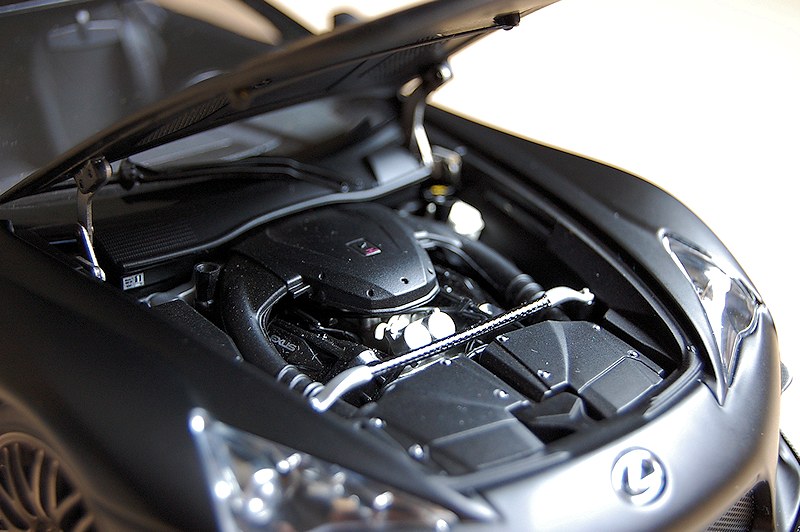 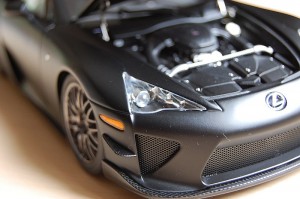 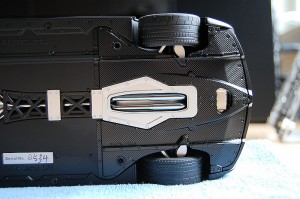 The motor overall is beautifully detailed, a lot of eye candy for the senses.  I could not see any differences between the two models other than the device sitting centre in front of the intake is a gold-ish in colour on the LFA and the Nurburgring edition in silver.  Underneath the undercarriage details include motor and suspension bits, but mainly a lot of the aerodynamic carbon fibre work/panels. 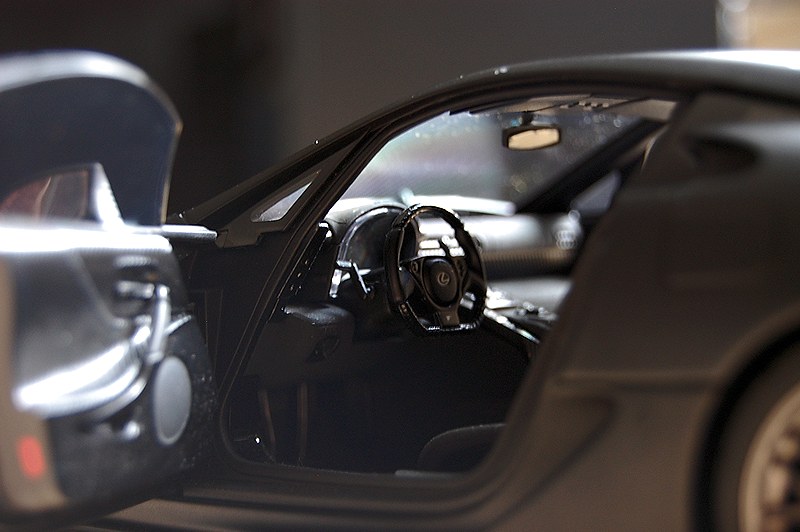 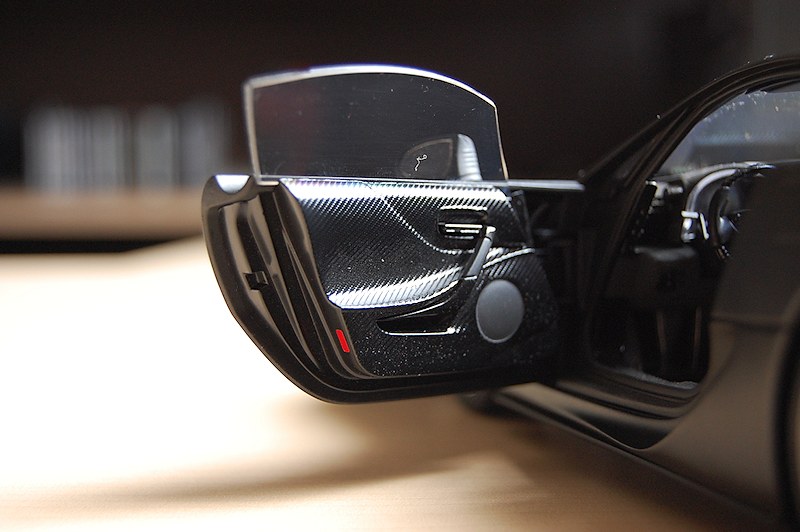 The interior is nicely finished as well.  The flashiness of the standard LFA is gone and replaced with an all-black interior with updated racing seats.  Carbon fibre bits are still present though, this is most evident within the interiors door panels.  Access to the rear storage is provided through the rear glass that features two gas-struts. 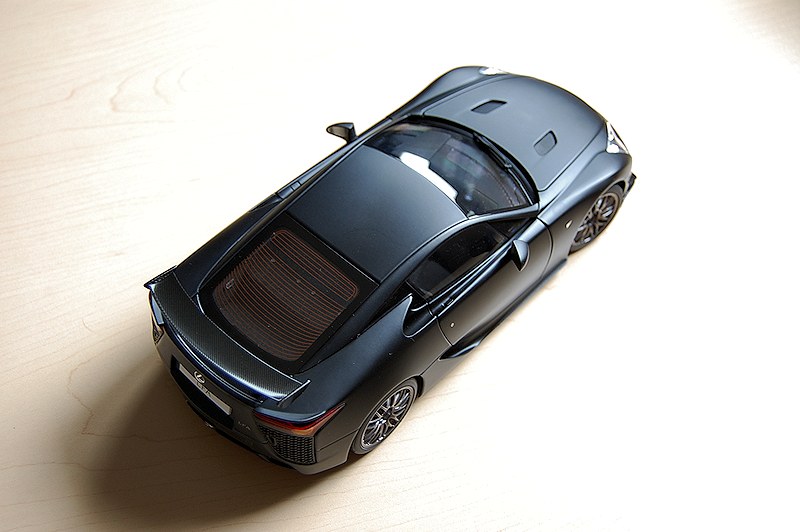 I’m not a huge fan of Japanese cars, my collection features less than 10 cars, but I do appreciate the Lexus LFA Nurburgring edition supercar.  The innovation and level of technology are cutting edge and quite impressive.  The track results don’t lie either, a car that can tame the Nurburgring is well-deserving of the title.  I can’t find much wrong with the model itself.  I also like the fact that AUTOart took ownership and updated the rear grilles.  This model may not be for everyone, but I can recommend it to anyone on the fence.  Enjoy the pics! 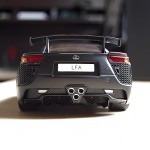 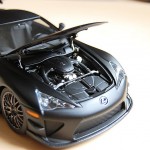 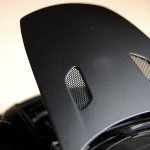 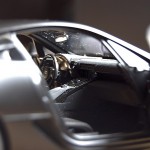 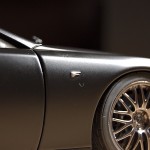 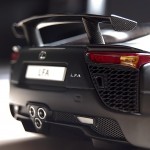 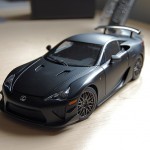 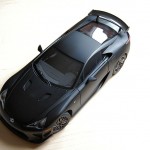 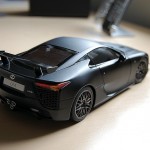 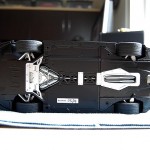 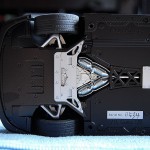