Words and photos courtesy of Miniauto.ro

The history of the Jaguar carmaker has its roots somewhere at the beginning of the third decade of the 20th Century. Then, two friends – William Walmsley și William Lyons – have been found a British company named Swallow Sidecar Company to make sidecars for motorcycles. In the following years, the business has been extended to coachbuilding, a common practice of that time when the body-on-frame car structure allowed to make a body from scratch. There was still a small step to produce cars entirely; so in 1931 the SS 1 was launched, a sports car equipped with a Standard Motor Company engine.

Later (in 1934) Lyons founded another company, SS Cars – which took over Swallow Sidecar – being interested to create relatively affordable sports cars for the British market. SS 1 has been followed by SS 2 and SS 90, then in 1935 has been launched a sports car with a sedan body, the SS Jaguar 100. This one has been produced up to 1941 when the factory stopped making cars due to World War II. 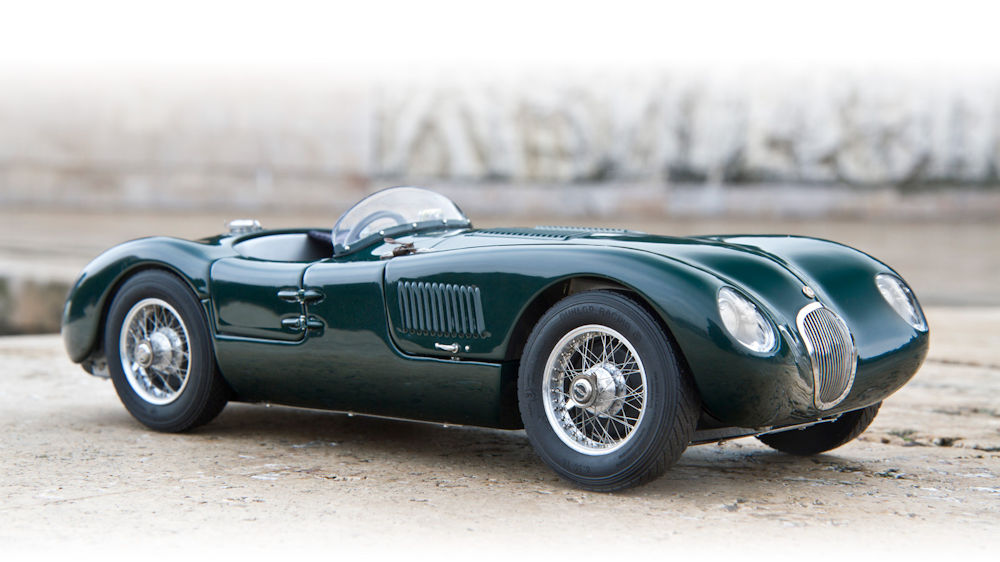 At the end of the war, the SS company resumed production and the board decided to change the name of the brand. Anyway, the SS brand had a somehow common resonance, furthermore, the SS Nazi troops added a very bad reputation to this acronym. The new name, already used for some versions before WW II, will be a glorious one: the new cars will be named “Jaguar”.

The first authentic Jaguar built in the post-war era was the sensational XK 120. This was initially designed only as a test car for the new Jaguar XK engine. Exposed at London Motor Show in 1948, it was received with a lot of enthusiasm and William Lyons decided to start producing it. In the following year, the first XK 120 coming out of the production line was delivered to American actor Clark Gable. The 3.4 litre 6-cylinder straight engine with twin-cam engine and 160 HP offered the roadster enough power for a 200 km/h maximum speed. Jaguar XK 120 became the fastest production car in the world. Enrolled in several competitions, the car was successful in some races, winning 5th place in the famous Targa Florio race in Sicily. Not bad at all for a streetcar. 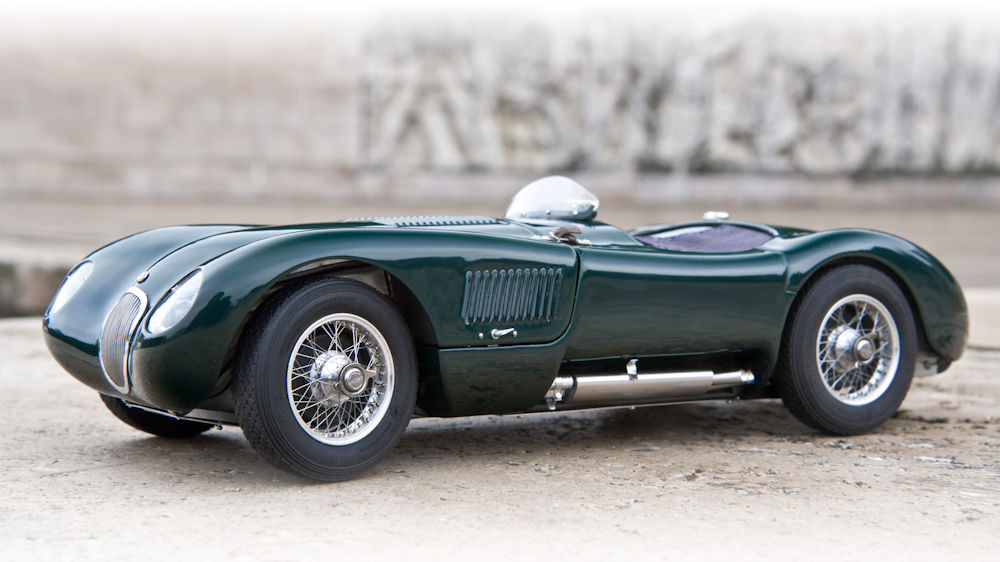 But the Lyon’s ambitions regarding the future of the brand were higher. In his vision, Jaguar needed a supersport awareness which could be achieved by winning the major races of the day. In short time, the idea came alive. The engineers have developed a sports car designed exclusively for the competition, a model based on XK 120 named XK 120 C, lately known as C-Type. The XK engine originated from XK 120 was mounted on a lightweight and steady tubular frame and was covered by a streamlined body. Common comfort features such as carpets or exterior door handles were completely eliminated.

The engine was a 6-cylinder inline twin-cam (DOHC) engine with a displacement of 3,4 litre and 205 HP. Between 1951 and 1953 only 53 C-Types have been produced, 43 of them being sold to private buyers, most of them from the United States. Throughout the production period, there were some important improvements, such as increasing the power (by changing the type of the carburetors) or replacing the drum brakes with disc brakes on all 4 wheels. The aluminum body of the C-Type was 350 kg lighter than the XK 120 body. 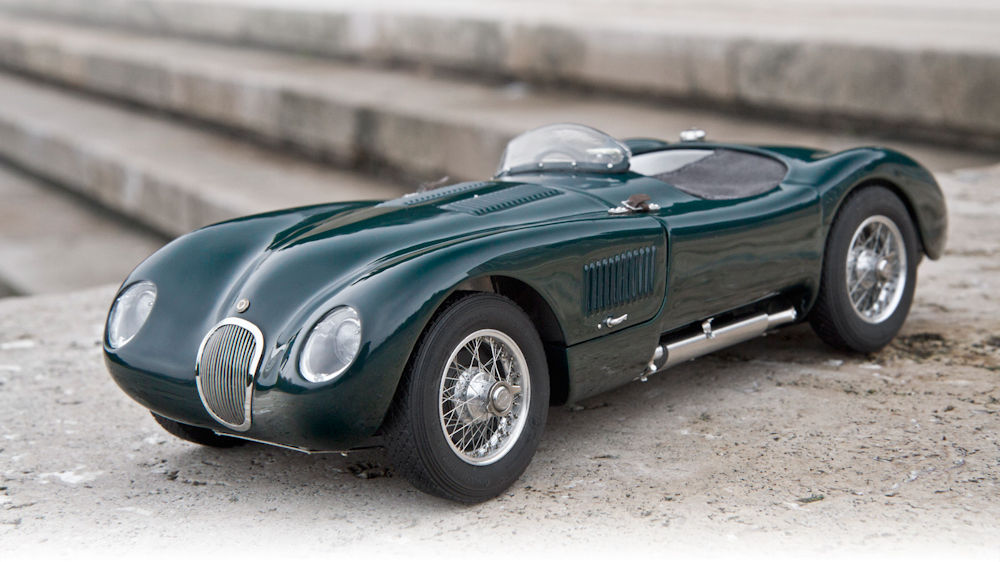 The goal set from the beginning was the victory in Le Mans 24 hours race; this has happened twice, in 1951 and 1953. Each year in the 1951-1953 period the Jaguar factory team enrolled 3 C-Types in the Le Man’s competition. In 1951 only Peter Walker and Peter Whitehead drivers (race no.20) have managed to finish the race; but they finished in the first place, with 9 laps in advance to the next team. In 1952 none of the C-Types has finished the race due to mechanical failures. 1953 instead was a great success for the factory team: the C Jaguars finished in 1st, 2nd and 4th place, with Tony Rolt and Duncan Hamilton as the absolute winners (the car with race no.18). It was another C-Type which has finished the 9th belonging to the Belgian team Ecurie Francorchamps.

The epic story of the Jaguar C-Type in the most famous endurance sports car race was fabulous but short. In 1954 the Jaguar already introduced the D-Type to Le Mans, a model which shared the engine and some mechanical parts with its predecessor but was shaped in a completely different streamlined body, inspired by the aviation industry. However, a C-Type belonging to Ecurie Francorchamps ran in that year on Le Man’s track, finishing the 2nd. Until the end of the 50s, many of the other C-Types participated in various competitions worldwide, with more or less success. Due to its limited number of pieces and some important winnings in sports races, Jaguar C-Type became a valuable collector’s item. Today replicas of the original model are sold for $70,000 – 100,000. When it was launched the C-Type was sold for $6,000 dollars in the United States, almost double the price of XK 120, approx. $60,000 in the present day. In 2017 an original C-Type, the first imported in the US, was sold in an auction at RM Sotheby’s for almost 5.3 million dollars. 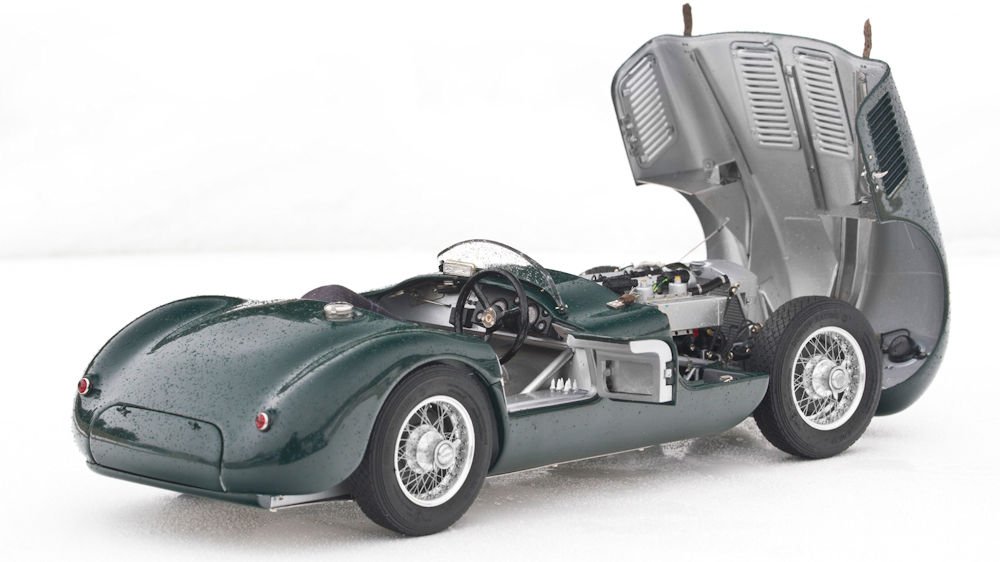 As usual, CMC paid a lot of attention to the subject in order to offer the collectors a very high-standard model. Also, as usual, there’ll be several versions of this model. This one in the photos is painted in British racing green without numbers and it’s already available in some online stores. The original car which served as a reference for the mini-model has an interesting history, its detailed story could be read here. Other versions will be launched in the next months in 2019: a Carmen red model without race numbers, which is reproducing the actual condition of the reference car; the winner of the 1953 Le Man’s race (also in British racing green, race no. 18); the car that arrived 9th in the same Le Man’s edition (the Ecurie Francorchamps team, painted in yellow, race no. 20); a car that was involved in the 1954 Carrera Panamericana race, but did not finish due to mechanical failures (white colour, race no. 13); last but not least, a car that ran in the Goodwood Members Meeting in 1954 (metallic blue, race no. 19).

At first appearance you could appreciate the paint job as excellent; CMC has improved constantly this aspect in the last years, achieving a high standard untouchable so soon for other producers. The shape of the body, streamlined and minimalist, is very well done. Just looking at the distance between the wheels and the body you’ll see the distance is accurate in scale, emphasizing the real sensation. All the air vents on the hood are drilled, and the hood’s closing system, with side latches and top safety straps, has been strictly reproduced. These latches are fully functional, but the hood is difficult to close firmly back, and tightening the straps will be an almost impossible mission. For those of you who want to admire the details under the hood, please be advised of that. 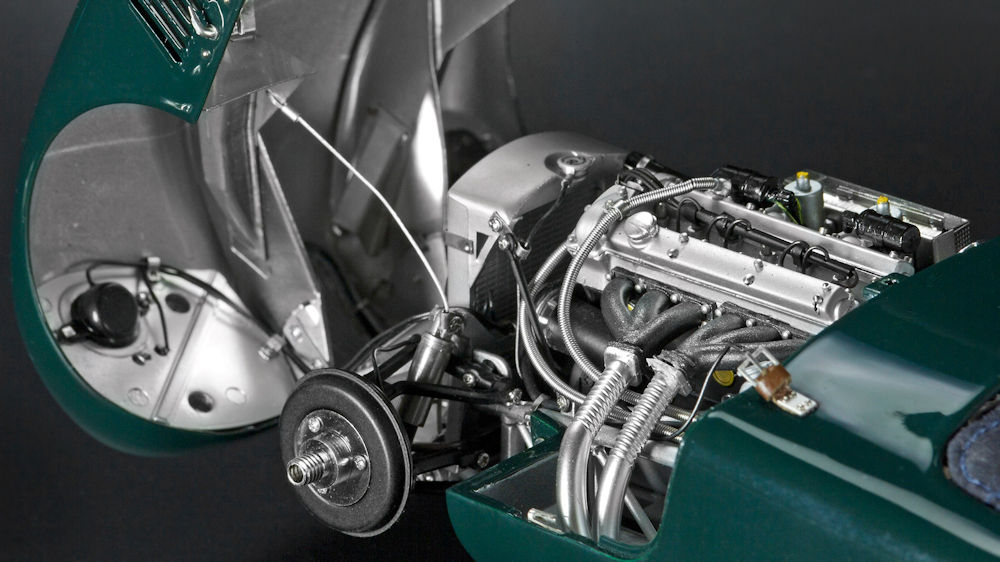 One small detail catches the eye though: the horizontal line of the body in the part where the hood meets the main body part is not perfectly straight; it looks like a finishing issue, we’ve met similar problems in the past to other models (the round edges of the back fenders of Ferrari 250 GTO, for instance). Once the hood is opened, there is a beautiful view of the engine aggregate mounted on the wire-frame chassis. The underside of the hood painted in silver could be maintained at 90 degrees by a metallic wire. One very refined detail can be noticed, the radiator grill is fully metal made and the number of vertical bars is the same as the original car. 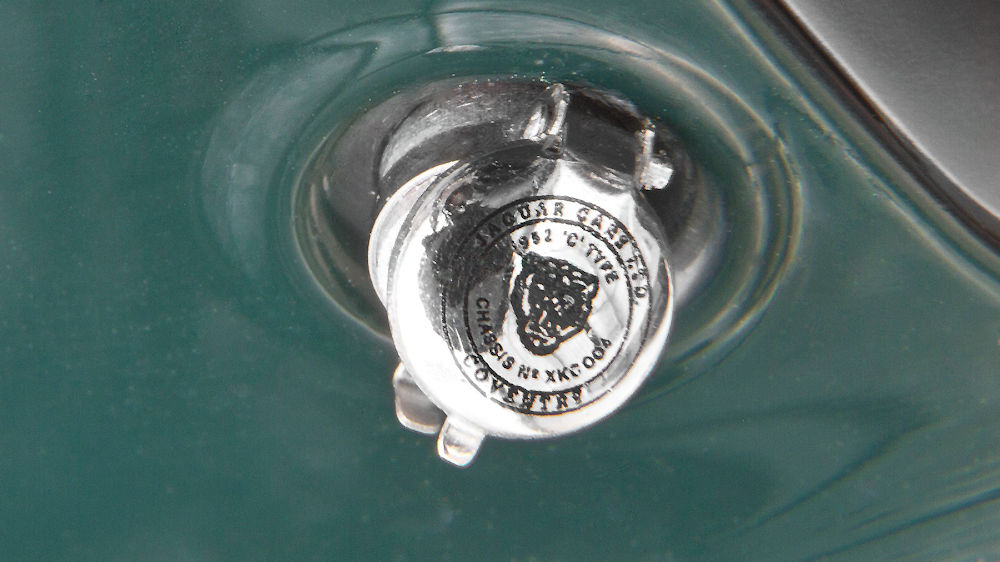 One can notice also the Jaguar badges, one on the hood and another one in the center of the wheel. But there are some other Jaguar labels too, on the gas tank cap and on the wheel locking nuts, which cannot be seen with a naked eye. The wheel rims with spokes and nipples are already a trademark for CMC and this time the producer seems to have worked a little bit more to the shape of the tires, which have a pronounced round shape that adds a more realistic appearance to this little car. The tires’ profiles have a visible shortcoming due to the manufacturing process which probably involves moulding in a two-halves cast. Those two halves are not perfectly aligned. If you want to admire the structure of the axles you can remove the wheels, but don’t forget the locking nuts on the right size are screwing off clockwise. 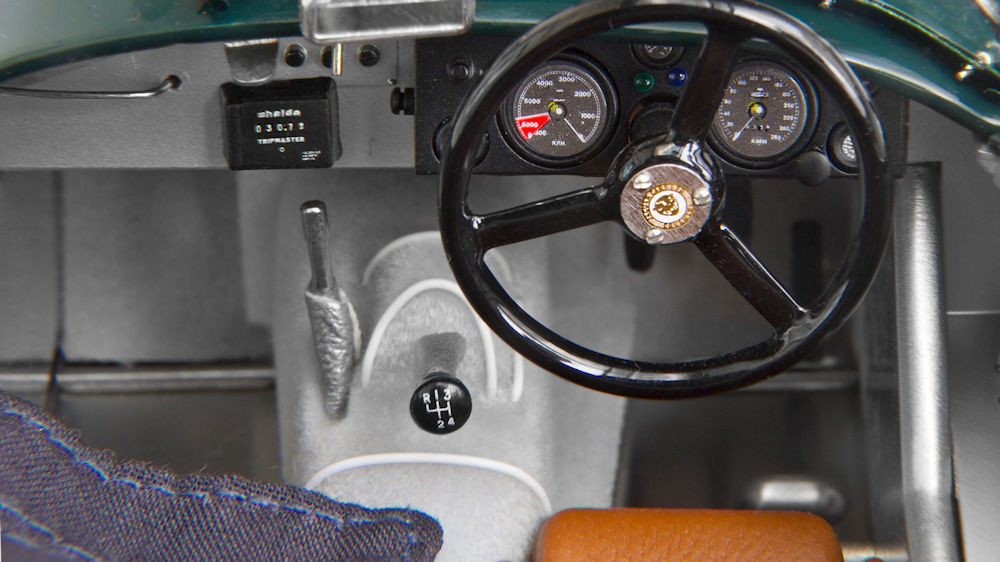 The interior has leather upholstered chairs and readable dashboard instruments; the gear knob is showing a little gears layout, perfectly readable. Inside the cockpit you can see parts of the tubular chassis; the only door of the car has very fine exterior hinges; somewhere under the door there are 6 tiny spark plugs, for the use of the pilot in case they need to be changed. Jaguar C-Type ran frequently on the circuit without a co-pilot, and the left chair could be covered by a flat fabric cover in order to improve the aerodynamics. On the 1/18 model this fabric cover is partly detachable, fixed in the back part and fastened with 2 little magnets in the front; a nice compromise that allows us to see the entire cockpit.

For this model, CMC gave up the rack system on turning wheels, widely used for other miniatures in the past. This is not necessarily a loss, because such a system makes it difficult for the movement of the turning wheel. Though, perhaps the wheels could have been turned more with a rack mechanism. Overall, according to the producer, the car is made from 1155 parts, a smaller number compared to previous CMC models. Even so, the miniature does not lack fine details, on the contrary. The trunk cover door (in fact the “trunk” is the spare wheel dump) is fastened with 2 small, seemingly fragile fly-cap screws. Good news if you have decided to open it when you’ll try to close it back the screws could be tight easily (I wouldn’t have bet at the first glimpse, looking at their size). 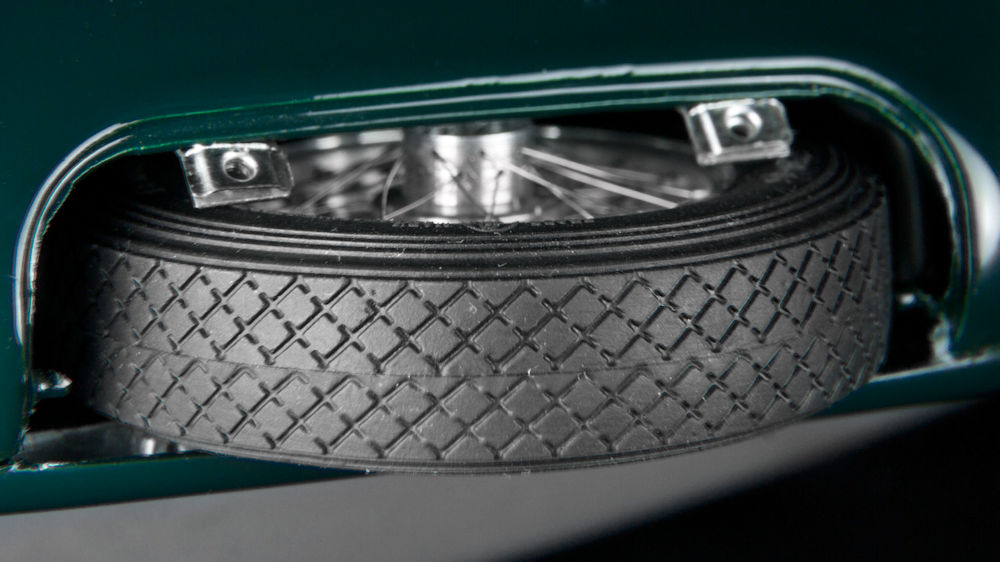 In brief, Jaguar C-Type is a wonderful diecast model, with a lot of functional details; combining this with its pure charm, you want to have it in your collection for sure. With so many colours and livery, versions will be a hard decision to choose the right one; definitely, this very classic race car is a must for enthusiast collectors. We hope that CMC will continue to reproduce other Jaguar legendary models, such as XK 120, D-Type, XKSS or even E-Type. Our British cars wish list is still pending.