The 1:18 Scale GMP Masterpiece Collection 1965 Chevrolet Corvette Sting Ray Coupe, #0218 of an undetermined number of units produced.  Heartwarming Memories of a sublime 2010 Christmas gift from Mom.  This beautiful diecast Corvette is an important part of my ongoing office-to-home scale model exodus project not only because it’s one of those extremely valuable “GMP Lost Castings” which have never been reissued now that the brand is owned by Acme Trading Company, but also because it is one of my most cherished Christmas presents from my mother.

Mom had the happy habit of asking me what I wanted during my birthday, the holiday season and other special occasions, and more often than not, my wish list had something to do with my lifelong automotive passion. So when GMP released this benchmark model replete with fabulous details, operating features, spot-on scale fidelity and astounding realism that I simply had to have, she wasted no time in procuring it for me. 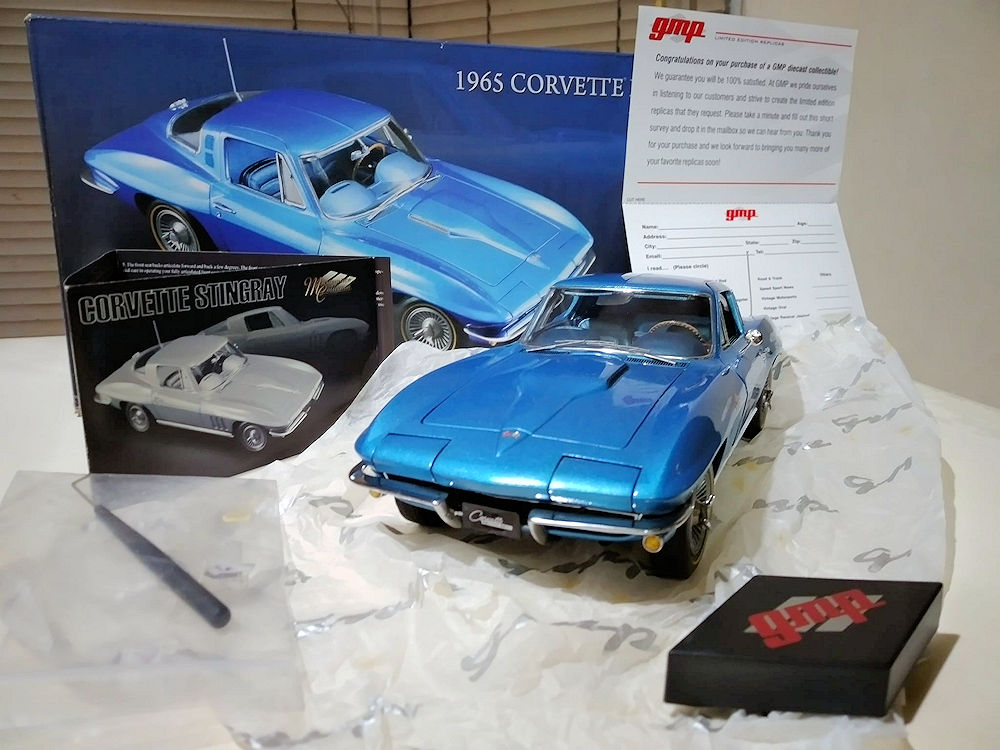 Today, more than a decade since this extremely valuable piece was first parked in the office display cabinet it has migrated to my home where it will eventually occupy a place of prestige and honour alongside my other second-generation Corvette model vehicles. For now, however, I’m content with enjoying it as I fondly recall how much Mom always made it a point to learn about the gifts she would give me, knowing full well that they would certainly deliver great joy to me.

Preserved and untouched except for occasional cleanup and “tabletop cruising”, Mom’s #0218 GMP Corvette Coupe has encountered some paint rash over the years but it continues to display quite well, as the photos prove. All packaging, accessories, literature and even the tissue paper with “GMP” graphics used to safely wrap the model in its clamshell inner box are all there. Even a short note from Mom was included, written in her usual eloquent, sweet and sincere style of “Traditional American English”. My wife and I took turns holding Mom’s letter to our hearts as we joyfully remembered how Mom was always enthusiastic about giving gifts… A reflection of her limitless generosity, her impeccable taste and her genuine zest for life. 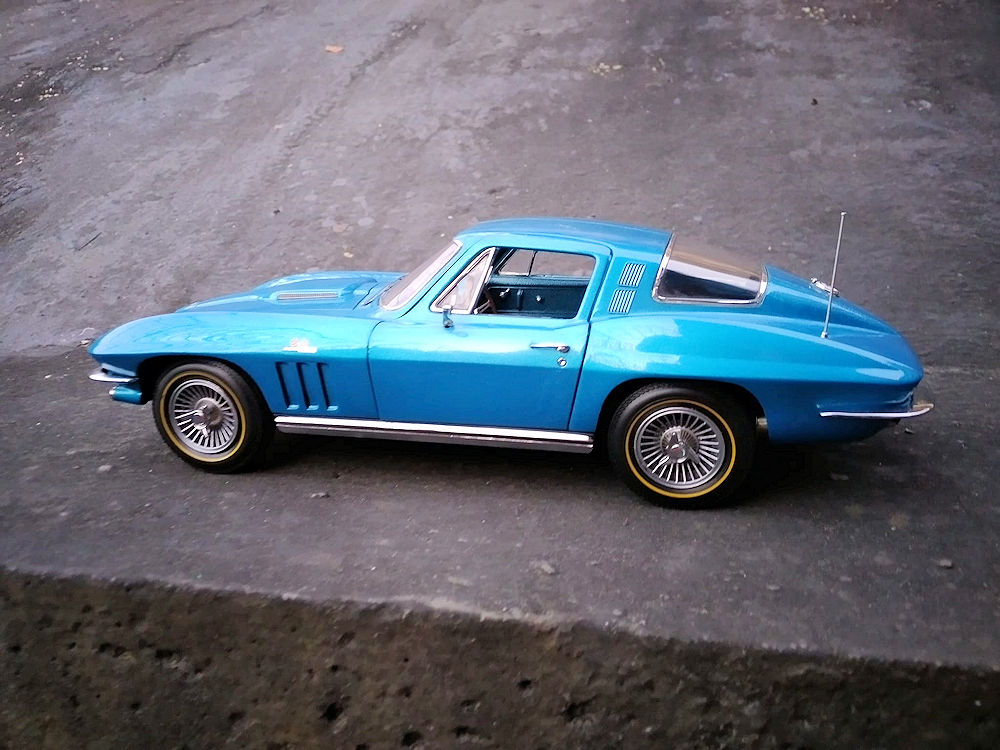 Even more valuable to collectors today than when it was first released, this GMP Corvette coupe and the earlier roadster variant represented the high point in the history of the original GMP entity before it was acquired by Acme Trading Company. The level of detail and the number of operating features, in my opinion, remain unsurpassed by anything from the brand, even up to the present day. 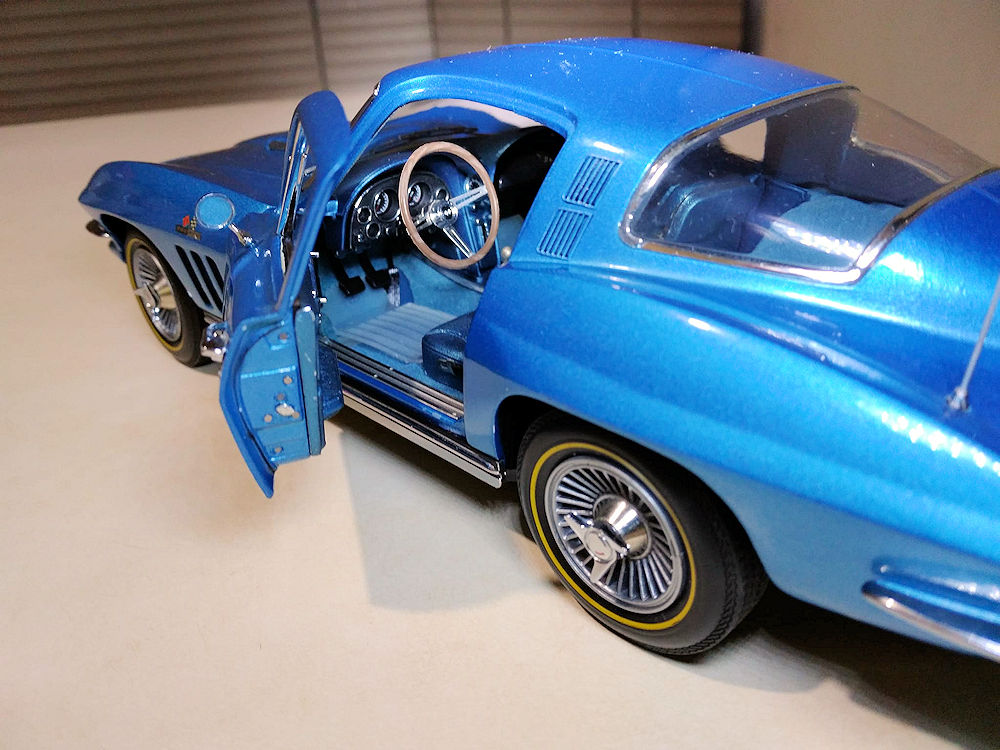 The glove box door opens and there’s even a miniature owner’s manual that can be placed inside. The fuel filler door opens as well, showing a miniature fuel cap underneath it. Separate clear O.E.M.-style Chevrolet clear floor mats are supplied, and their use doesn’t interfere with the fore-and-aft sliding adjustment of the seats whose folding seatbacks give way to a removable rear cargo cover. A careful twist of the “knock-off” wheel spinners is all it takes to dismount the wheels and tires in order to view the vented disc brakes, caliper and hub assemblies.

The model even comes with a spare wheel which can be used to replace any such unit fitted to the four corners of the vehicle. The windows roll up or down, using the cranks installed in the door cards. An exhaustive care and instruction pamphlet is included so the owner can make the most of the model’s multifarious life-like features. 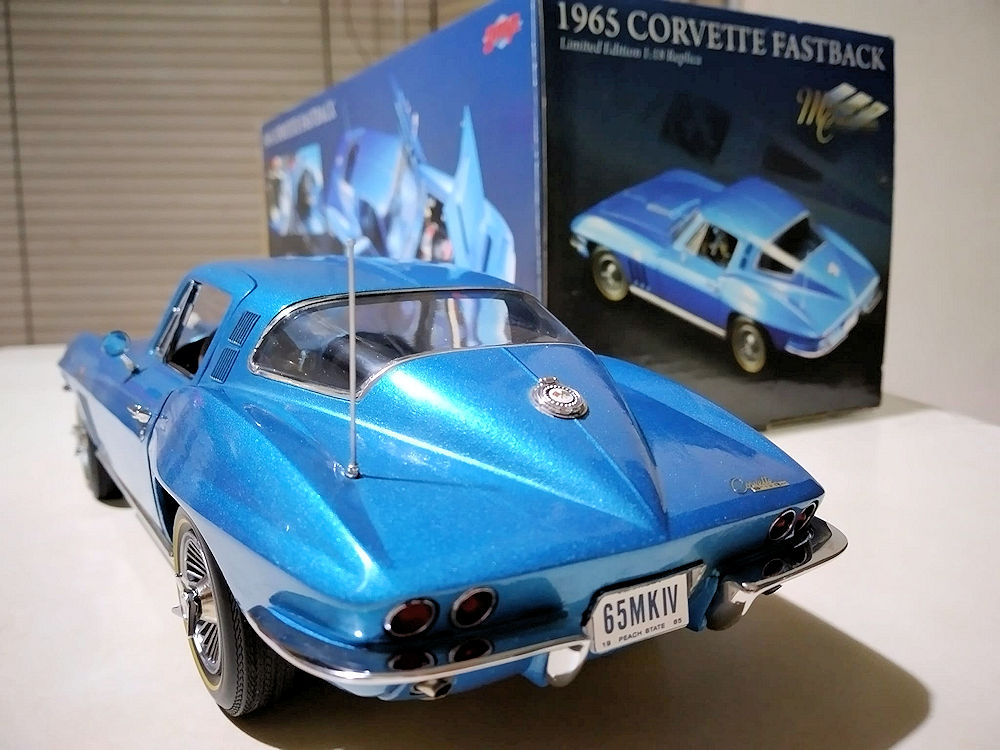 This particular unit isn’t perfect. It came without a rearview mirror, surprisingly, and the driver’s side front disc brake rotor is stuck for all eternity. There’s nothing I can do about the former, but I have improvised a way to make the model roll freely. Incidentally, when it takes a “cruise” on the desk or table, the driveshaft moves in conjunction with the rear wheels!

This GMP Masterpiece Collection Corvette truly lives up to its name. I have compared it to the two other 1:18 scale C2 Corvette Sting Ray standard-bearers, namely the AUTOart 1963 Corvette coupe and the Exoto Motorbox 1967 Corvette coupe, and while all three brands represent the highest level of accuracy, scale fidelity and realism, feature-for-feature, pound-for-pound (the GMP Corvette weighs more than one kilogram!), the GMP model is superior in just about every aspect. 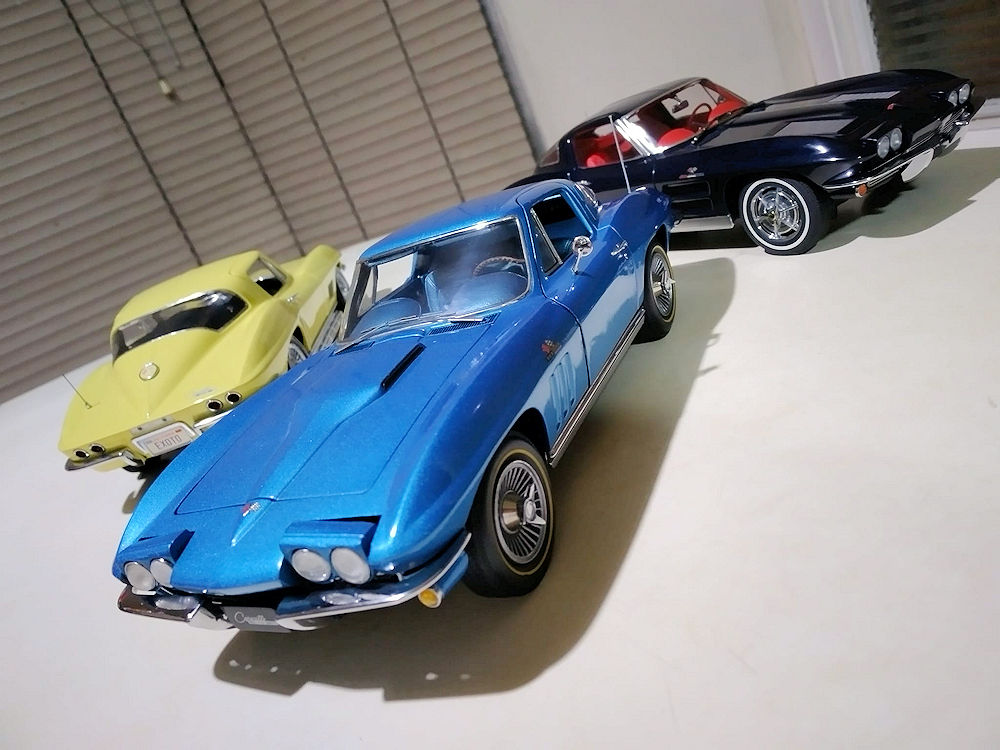 Sadly, this monumental casting was never re-released when Acme Trading Company absorbed GMP. Online discussions reveal that the tooling for both the GMP 1965 Corvette coupe and roadster reportedly mysteriously vanished and could not be located for further use. That means there will be no more new GMP Masterpiece Collection 1965 Corvette models as we have come to know and love them. This makes each and every unit from this highly regarded short-lived range, including this beloved #0218 Nassau Blue coupe, a genuine class act. In this particular case, that conclusion would certainly pertain as well to the wonderful individual who sent me this magnificent gift more than ten Christmases ago. Profuse gratitude reiterated, Mom! I love you very, very much!