What is the first thing that comes to mind when thinking about Miami Vice? Well for me that answer is simple, it is of course the white Ferrari Testarossa. It doesn’t get more 80’s than that. And also, in my personal opinion, it makes white the only correct colour for the Testarossa. The model under review today is a white Testarossa. More specifically, it is a 1984 ‘monospecchio’. Doesn’t that sound brilliant? It sounds like there is some special engine involved, in the same direction as terms like ‘quattrovalvole’. If we translate the elegant Italian language to simple English, it means the car has one mirror. Sounds a lot less attractive now, doesn’t it? The model involved is a ‘US-spec’ car made to look like the Miami Vice car as well. 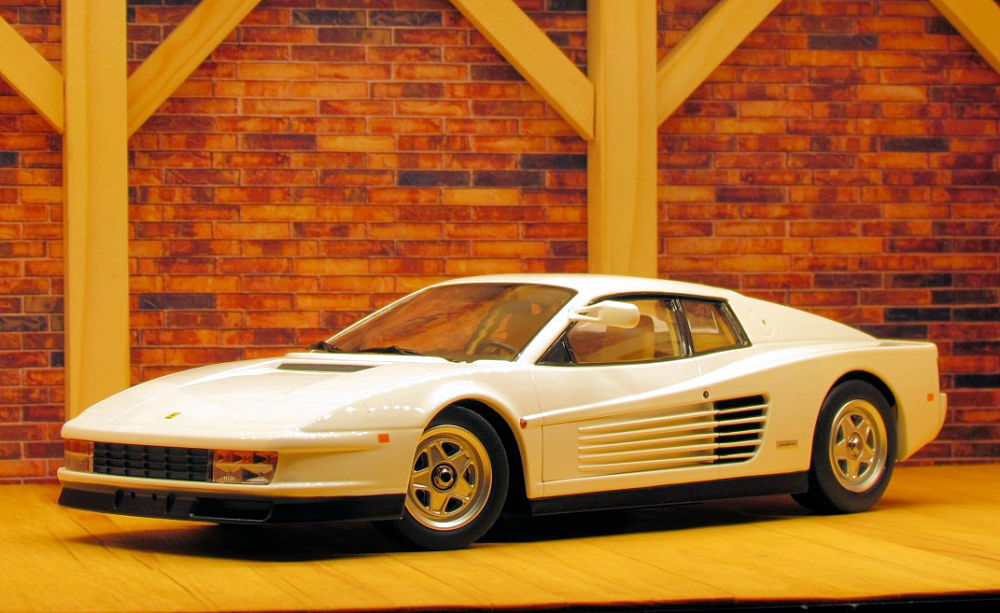 The model we are going to take an in-depth look at is made by KK-Scale. KK-Scale is still a relatively young brand, making various models, from various brands, but always according to the same recipe. That recipe is a die-cast body, fully sprung suspension, working steering and rolling wheels. Unfortunately, that die-cast body is sealed, so no opening parts. KK-Scale is on the price-friendly part of the scale model ladder, asking around 60-70 euros for a model. What do you get for your money? Well, read on. 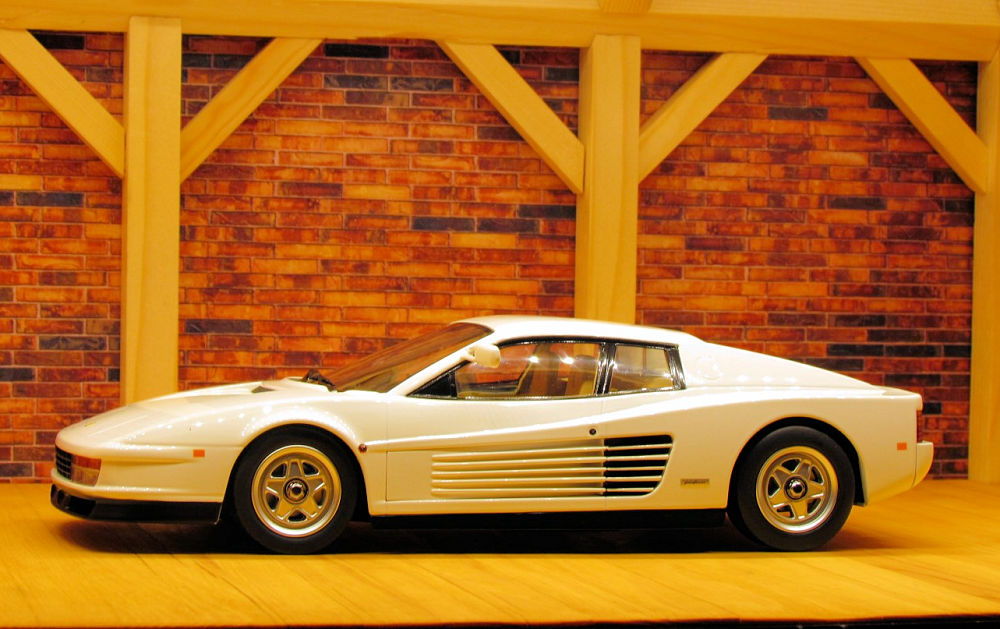 We start, as always, with the exterior of the model. Being sealed, the exterior is of course also the most important part. The first impression of the model is not bad. Of course, it’s not a BBR model, but there is no immediate disappointment. Let’s zoom in on the paintwork first. The pure white paint is applied evenly and has a decent shine to it.  Unfortunately, it is not perfect, as I can spot a couple of places where there is some trace of black paint on the white (see the photo below, it is visible on the left side front fender).  The spots are very tiny and, I haven’t tried yet, probably super easy to polish out. Also on the roof, I can spot some tiny pieces of dust in the paint. They are so small, that they are impossible to get on a photo. Also, there is some orange peel visible. I have noticed this on every KK-Scale model I have seen so far. I own four but is it most prominent on this white paint. 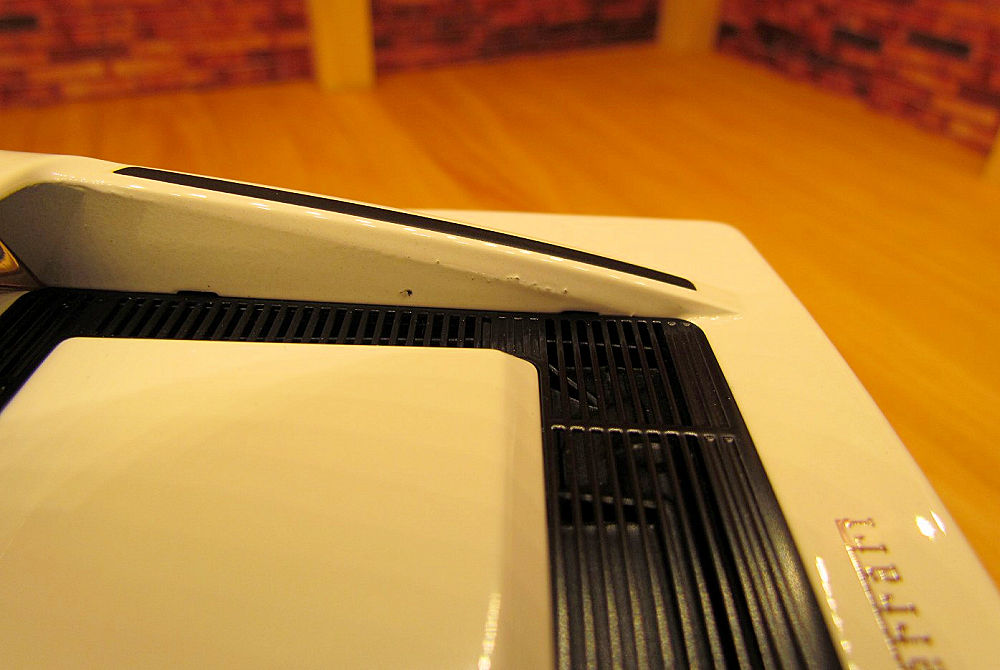 Checking the shape of the model is not too difficult, as there are a lot of pictures available to compare the model with. It looks decent from all sides. But that was before my many measuring devices came out. I measured this model and the length and width are spot on. The wheelbase is 1,5 mm too long (which translates to 2.7 cm or over 1 inch in real life) and the height of the model is just over 2 mm too high. The last is weird, because the tyre diameter, both from and rear, is 1 mm too small. It also doesn’t appear to be too high on its suspension, so the shape of the car itself must be off. But, as said before, comparing to pictures it looks decent. And to be honest, for this price point, one cannot expect the model maker to laser scan real cars, as AUTOart does. I can easily live with the shape. The stance looks good, no anomalies here.

The panel gaps, if one can speak of panel gaps on sealed models, are not the model’s strongest point. I have noticed it before (and not only with KK-Scale), but with sealed die-cast models, the panel gaps are most of the time very shallow. Especially with the lighter colours, this gives an impression of a lack of definition between the different panels. I have seen it on Kyosho’s Ousia series and sealed Norev’s as well, so it seems to be part of the design in combination with chosen materials. Resin models do a lot better in this part. It is not bad, but the overall impression would be better executed with deeper panel gaps. Basically, you can see it is sealed from quite a distance. 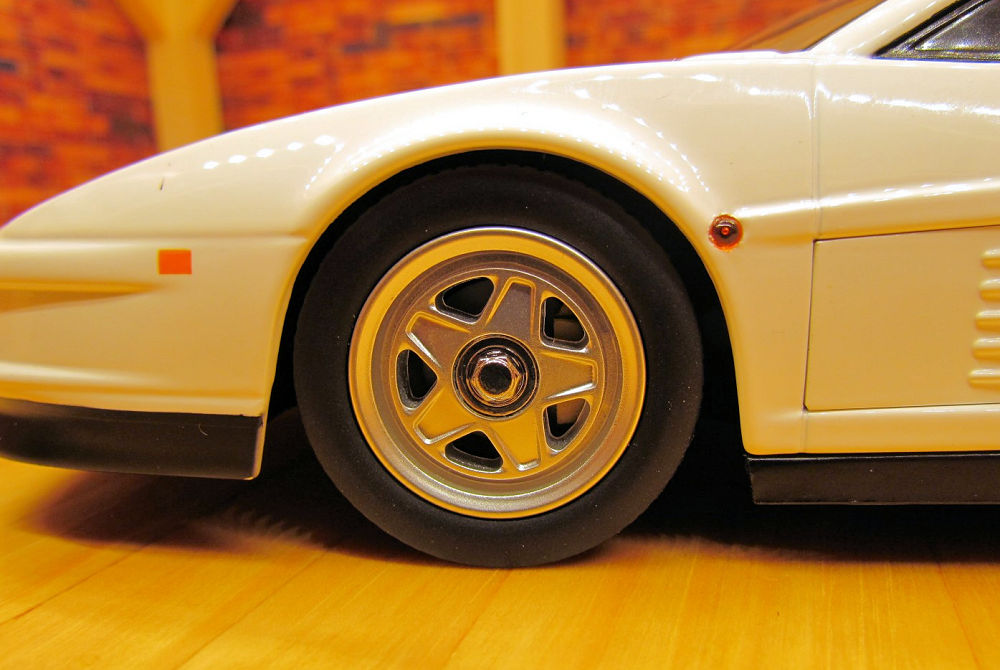 On to wheels and tyres. The wheels look true to the original, with the typical 80’s style Ferrari five-spoke wheels. Most of part the wheels are aluminum coloured, with the centre parts chromed. This Chrome looks very cheap. Behind the wheels, we see the rotors and callipers. The wheels are not very open, like modern wheels are, so the brakes are not overly visible. What is available in view looks okay. The tyres have no branding on the side walls. The thread looks true to the original Michelin TRX tyres the real Testarossa came with from the factory. Nice.

What else is there to see when looking at the exterior of this model? Let’s start with what gives this car its name ‘monospecchio’. I have no idea how KK-Scale did it, but this eye-catching mirror should be exactly halfway down the a-pillar. Well, it simply isn’t… If I can spot this in exactly four seconds, why can’t KK-Scale? It is placed too high and not even a bit. Not good. 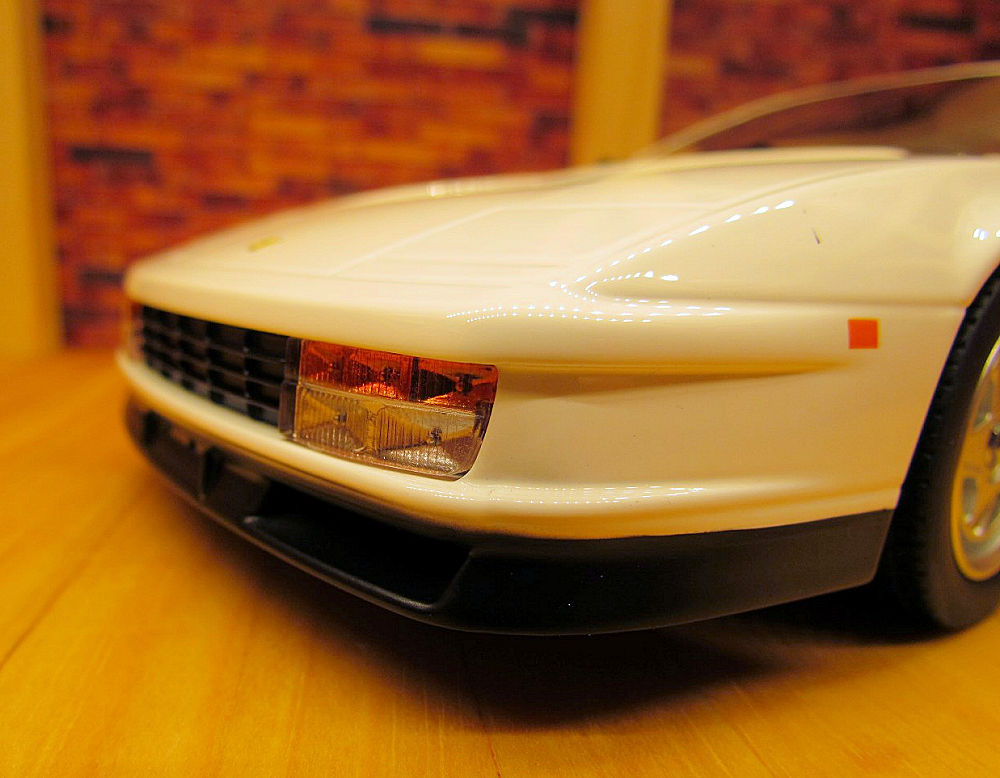 Another point of criticism is the blend of US-spec and Euro-spec on this car. I will sum up the most prominent differences between the two: The US-spec has side running lights, a third brake light in the engine cover and the typical rear impact structure. Also from 1987 onwards a different dashboard with an extra ‘shelve’ under the dash. The original Euro-spec didn’t have any of that but had side blinkers between the front wheels and doors.

Now let’s see what the model has. Keep in mind it is presented as a 1984 US-spec and also has Florida ‘Miami-vice’ plates. It has the side running lights (good), it has side blinkers (wrong), it has no third brake light (wrong), it has the rear impact structure (good) and finally the US 1987 dashboard (wrong). Come on KK-Scale, this has nothing to do with cost-cutting, it’s just paying attention when developing a model.

Next on my list are the lights. The front lights look pretty convincing. Nice colours are used and they recreated something that looks like the light bulbs as well. The Testarossa can have different front lights, some have the whole top part amber, some only a part. This has the whole top part in amber, just like the real Miami-vice car. All good here! The same goes for the rear lights. The typical US-spec sidelights are sadly just stickers, while the (wrongly present) side blinkers are nicely detailed. Mark my words, KK-Scale is going to release a Euro-spec Testarossa and they will just leave the stickers off. So cost-cutting nonetheless in the end? 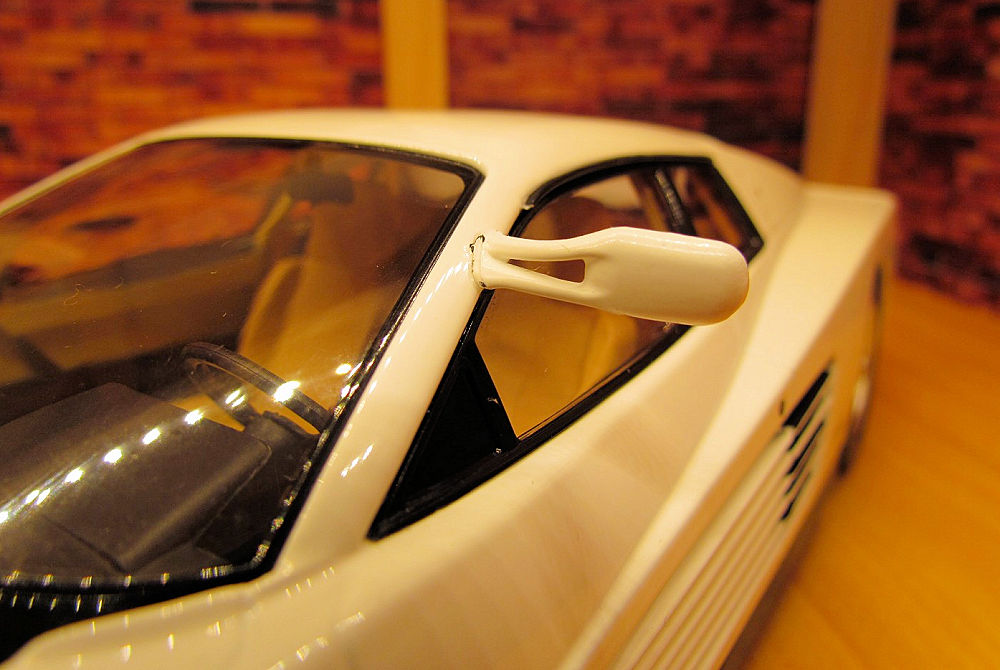 On to the next part, the windows, window frames and wipers look good and solid. Solid is also something that accounts for the various grills around the model. In this case, solid is of course not so good, but for a sealed model in this price range, expecting mesh grills is not realistic. I was more surprised when I noticed the grill in the engine cover is indeed open. I like it! Behind we see some bits of an engine as well. Curious as I am, I opened up the model to see what is actually behind. See the photos, but don’t expect too much.

The various other exterior bits look okay. The front Ferrari logo is nice and also under clear coat it seems, the Ferrari text on the engine cover is a real photo-etched part. Very impressed here! The Testarossa sticker on the rear, the Pininfarina logo’s on the sides and Miami-vice plates are also good. Although the Testarossa text seems a bit large, now I’m starting to nit-pick. 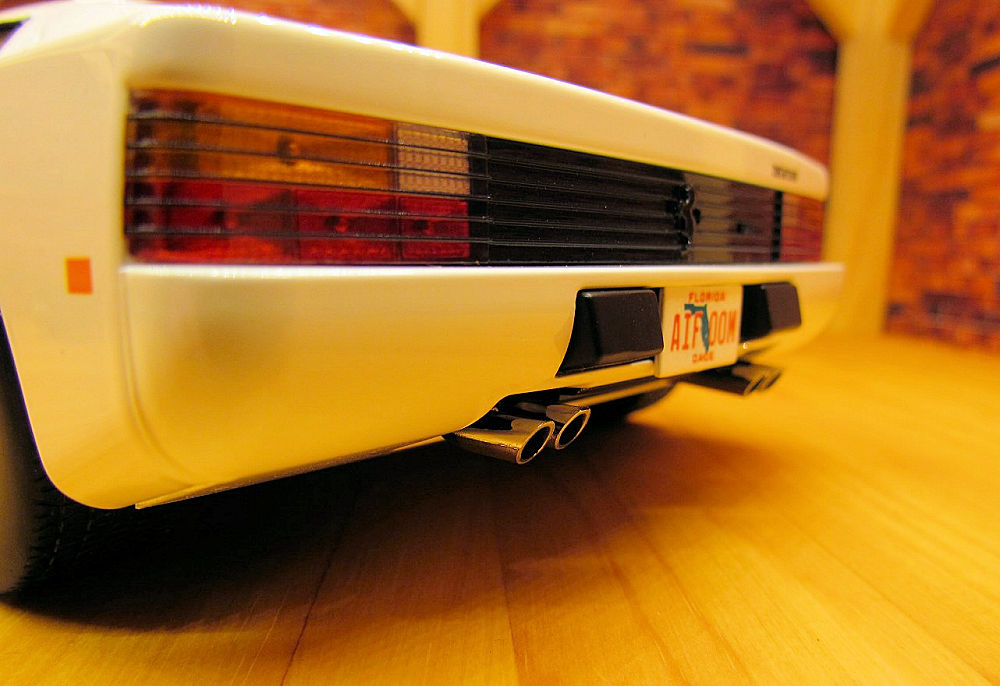 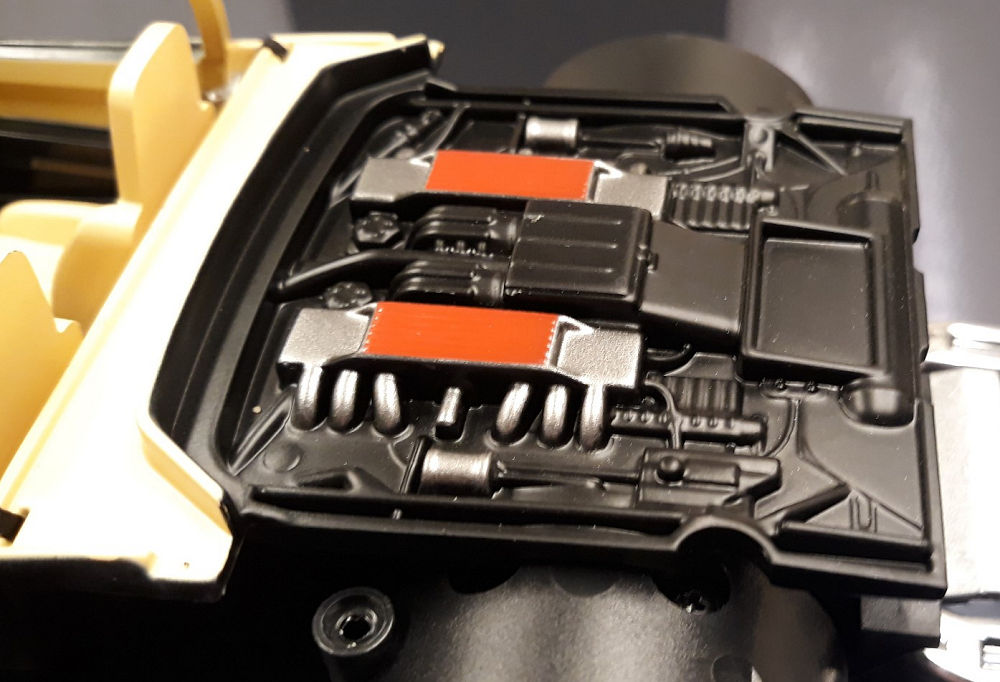 The last part of the exterior to evaluate is the exhaust and underside of the model. Well with the underside we are quickly finished, as there is not much to see, like on most sealed models. At the rear is a very rudimentary engine visible with the exhaust going rearwards from there. The exhaust system/tips are crafted in ‘chrome’. Like in the centre section of the wheel, I am not a big fan of the cheap chrome KK-Scale uses. The inside of the exhaust tips is made matt black. Looks convincing. 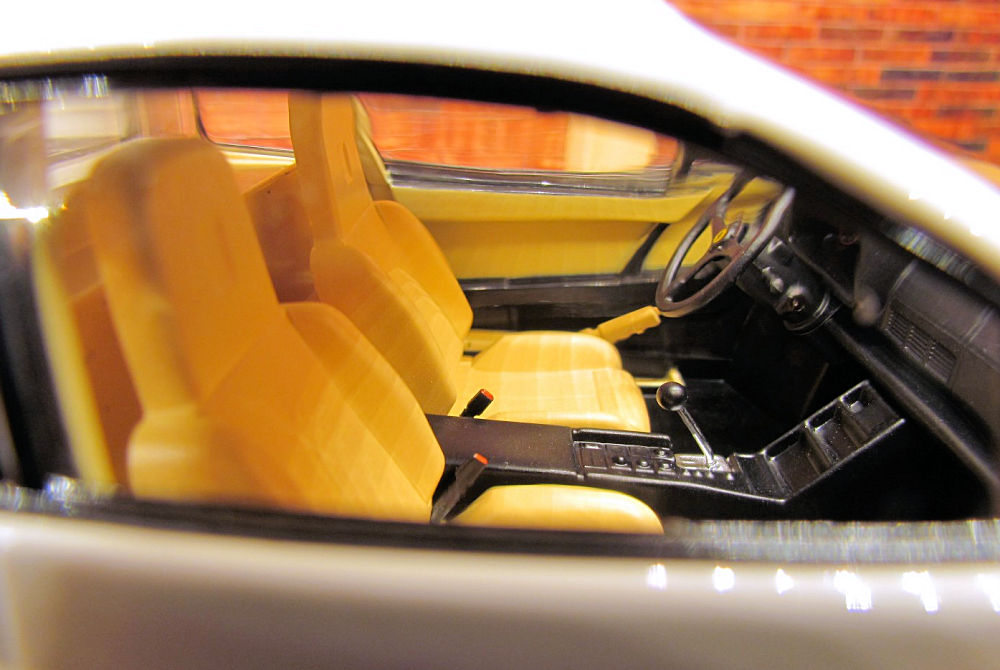 Only the interior to go. As this is a car from the ’80s the pillars are quite narrow and the windows relatively large. Add to that the light coloured interior and it is not hard to see the interior. Normally on a sealed model, it is hard to get a decent view, but here it is simple. Unfortunately the good ends here.

The interior is, well let’s put it mildly, not so good. The steering wheel is by far the best part, as it is a delicate part with nice thin spokes. Also, the seatbelt is from cloth (AUTOart are you reading?), but the rest is very dreadful, badly painted plastic. As mentioned before, I opened up the model to look inside. Well, that didn’t improve my opinion on the interior…  See also the photo’s I took after opening the model. On the other hand, for a modder, this is a window of opportunities! With some decent paint on the seats, door cards, various buttons and some flocking it will transform completely I’m sure. 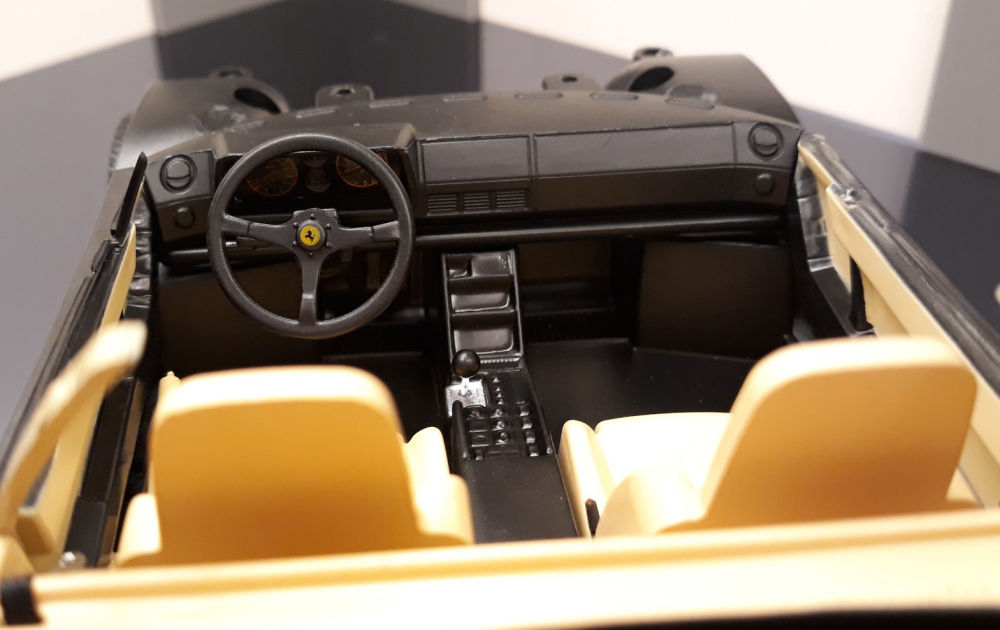 So what is my conclusion? Well, I have mixed feelings. It is a very cool model for a friendly price but it has its negatives. The biggest of those for me is the mix-up between the US- and Euro-spec and the very cheap interior. The biggest positive is that it looks really good when on display.

So do I recommend buying it? Mwah, yes and no. For me, it became a yes, because I only had a red Bburago Testarossa in the collection and the alternatives are the Hotwheels Elite and the Kyosho. The first is very overpriced second hand and not even that good a model. The white Kyosho is rare and paint rash also a problem. For me, this KK-Scale is a placeholder, nothing more. When something more beneficial (and full opening) comes along I will sell this KK-Scale and upgrade. Kyosho is re-releasing some of their gems lately, so let’s hope at some point their Testarossa will become available once more. If you already have the Hotwheels Elite or the Kyosho, I recommend leaving this model at the shop. Happy collecting!