It’s great to see Kyosho making somewhat of a comeback in the diecast metal scale market arena.  They recently announced the all-new 1:18 Jaguar E-Type Coupe in right-hand drive.  From what we gather this replica is based on the 1961 model.  Three colours will come to market, they include Opalescent Gunmetal, Opalescent Dark Blue, and finally the most familiar skin of British Racing Green.  Full 360 access is part of the package too.  And the exterior packaging pays homage to the legacy, the exterior labelling helps celebrates the 60th anniversary of the Jaguar E-Type.

There has been much written about Jaguar E-Type with many brands over the years challenging their teams to execute the best possible scale option.  It’s been a mixed bag of discipline – from budget level to high-end examples…  There is has yet to be a pinnacle reference replica.  Can Kyosho break the trend?  Bring us back to the early years of wearing the crown, when a good assortment of their models, including much wearing the Ferrari badge, did?

Some consider Jaguar E-Type the most gorgeous car ever produced.  We would agree.  If Enzo Ferrari was quoted as saying “the most beautiful car ever made” that surely speaks volumes.  At 60-year young, the car looks as grand as the day it was revealed to the public.  Setting a benchmark for styling and performance; many have yet to come close, even today… bias aside of course. 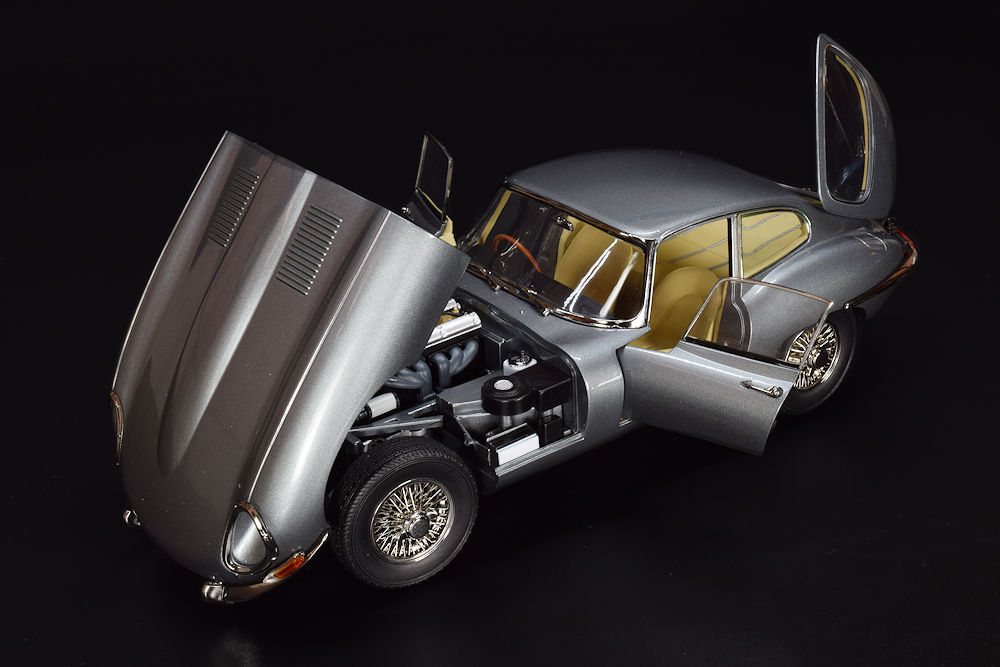 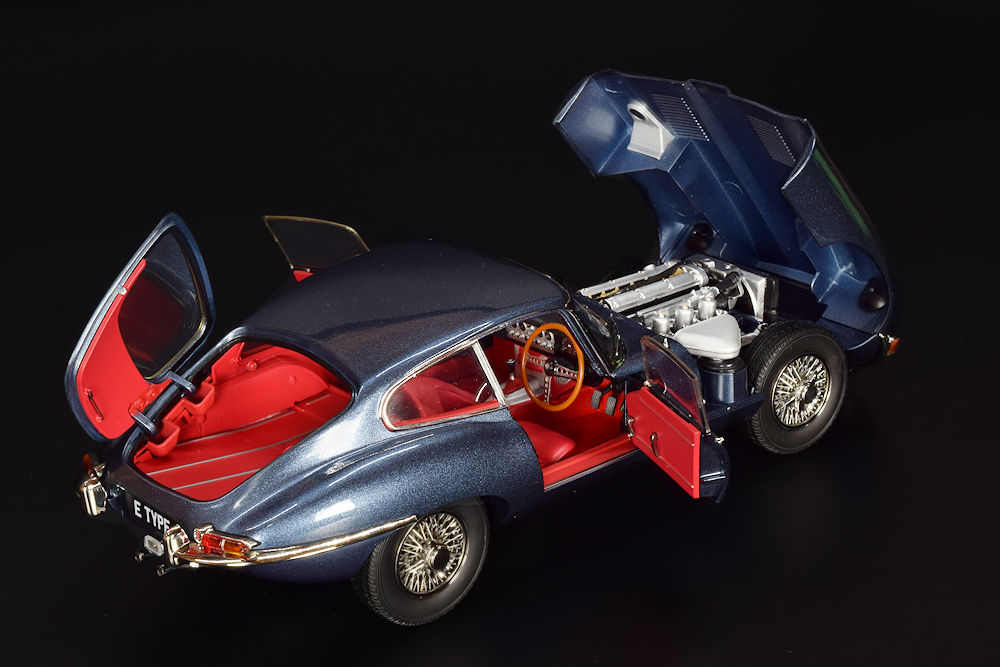 Our team received two samples, both our which are the basis of the review here.  We have the Opalescent Gunmetal with Beige interior and Opalescent Dark Blue with Red interior.  Both garish some praise, each looks splendid in the flesh.   With zero bias, the clear winner for us is Red!

As for the exterior execution, good marks to Kyosho for capturing the overall lines and styling cues.  With the exception of the rear end wheel well; the forming of the back section’s curvature (nearest to the rear) is off, it should be more angular, straight down.

Exterior paint is top-notch on both examples.   Smooth and even attention throughout.  Chrome work is very good as well, this covers multiple parts throughout the car.  Shut lines are quality too, where the energy falters in the gaps between each accessible structure. A more genuine effort would have resulted in a more favourable exterior, this is especially important when the exterior side paint resides in a lighter shade.  And since this is a new mould from our understanding, we expected more. 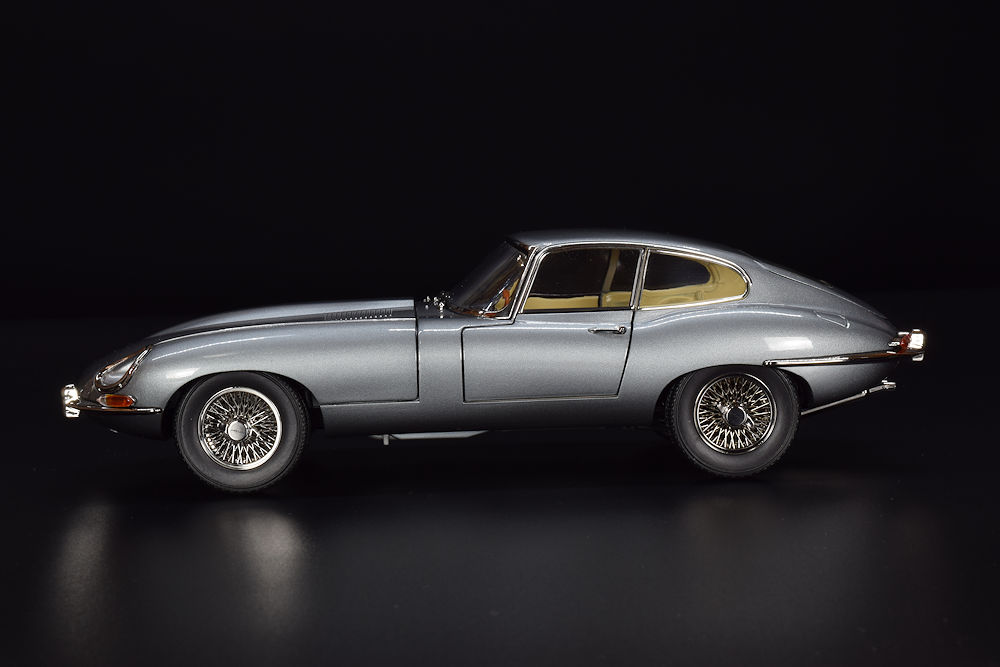 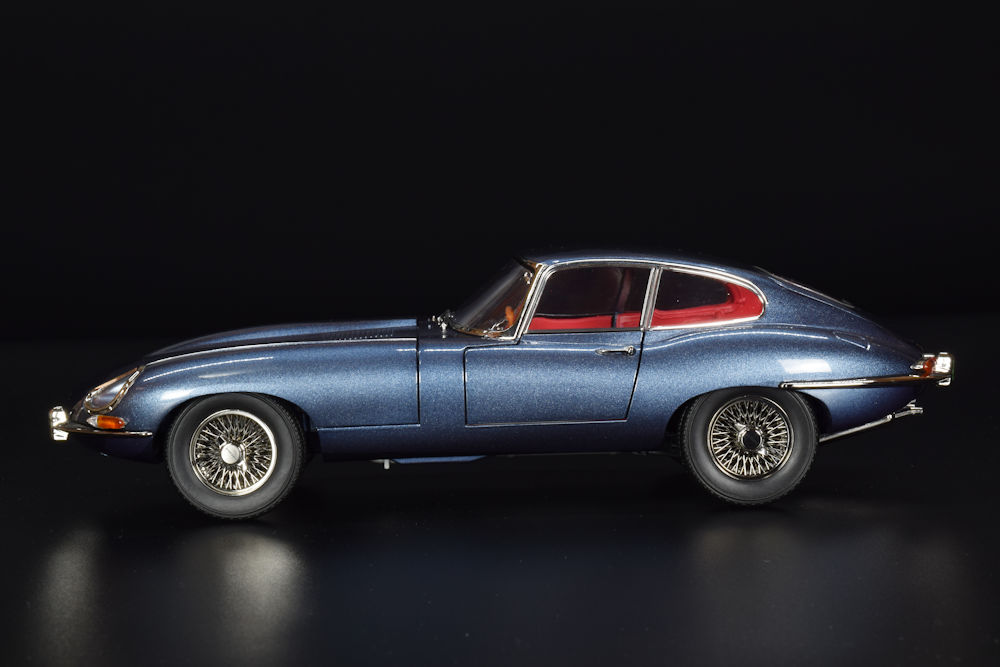 The long hood line and mates to covered headlight lenses, each element are symbolic of the E-Type form.  Unfortunately, Kyosho’s interpretation of the shape of the headlights is slightly-off.  They lean more to oval shape – possible due to the thickness of the chrome headlight covers.

The centre grille is beautifully formed and features a perforated metal grille in the back.  We also like the quality centre emblem.  Bumpers are nicely crafted as well as highly-detailed side indicator lights.  As we move upwards the hood is formed with stamped fins (top end), the results here are decent but in reality, should be clear through exposing inner workings. 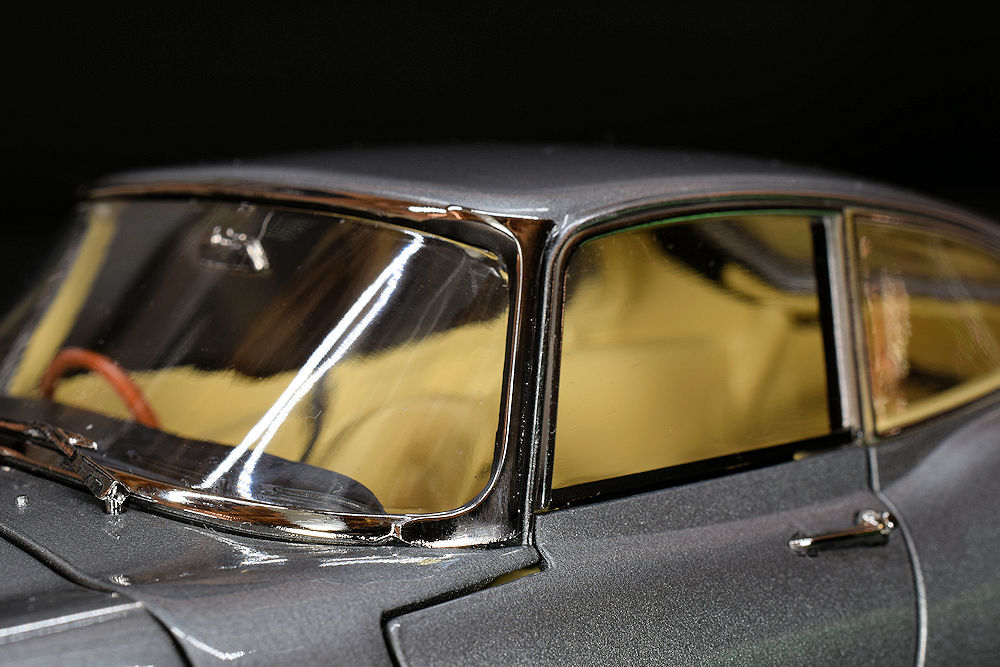 Three windshield wipers are in check.  We need to note that Kyosho produced the front windshield frame in multiple parts – structures include sides, upper and lower frame, authentic to the original. 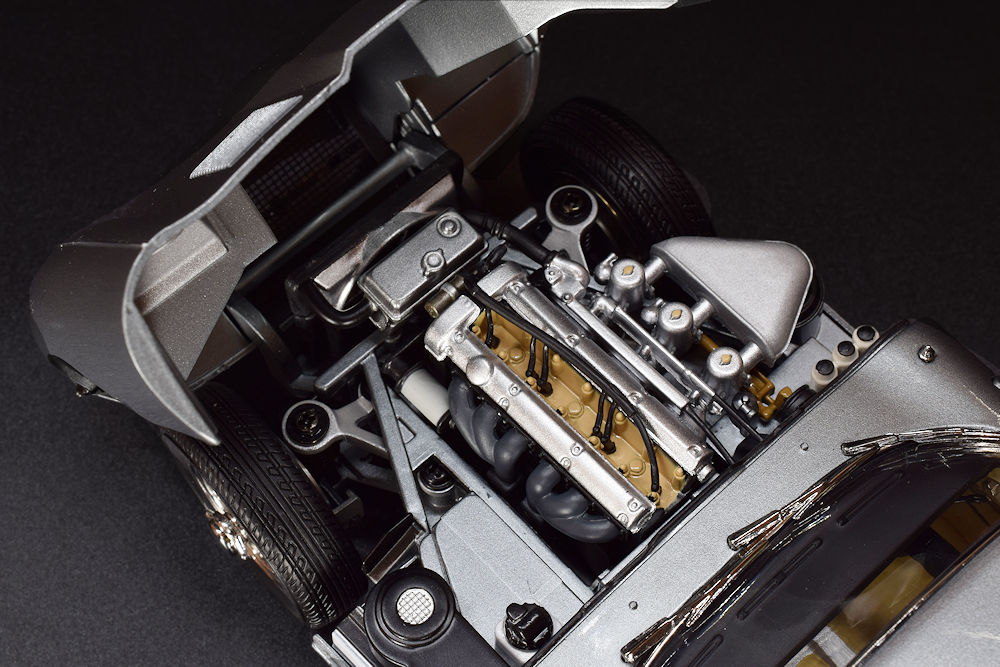 Opening the hood is as simple as pulling upwards.  Both examples worked without issue with tactile smoothness.  This is achieved with two simple metal hinges in front.  Inside the engine detailing is above average, the block is the primary focus with adjacent elements done well.  As you move away from the main block the attention is subsided.  There is no real definition of the underworking of the hood itself with the exception of air direct apparatus to the heater box.  And speaking of the heat box, the grille on the top-side, as shown above, is painted which in reality should be a perforated grille. 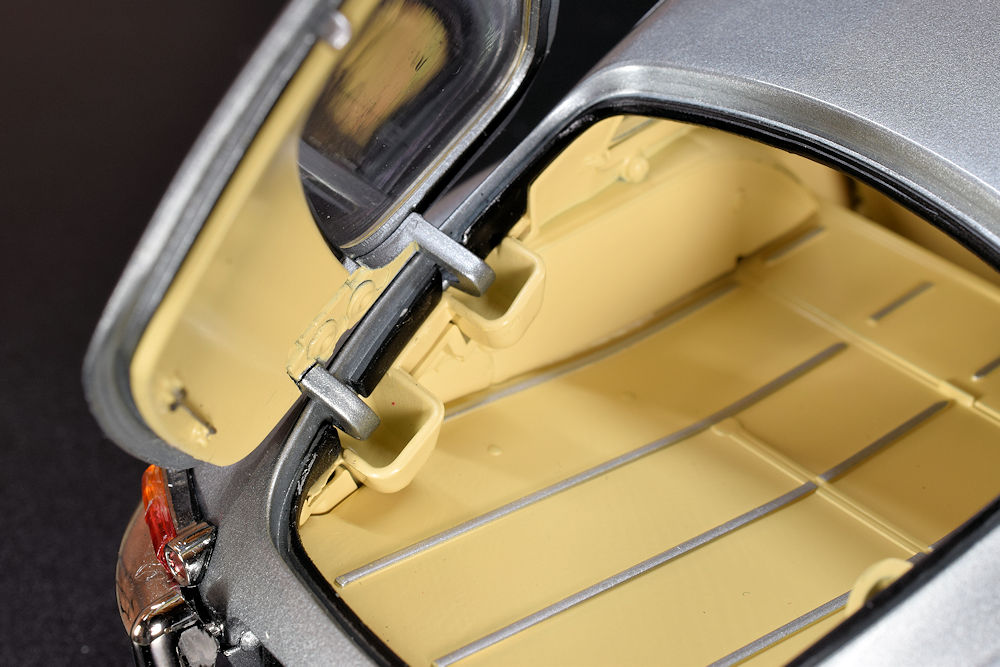 Moving to the rear of the car, you first encounter access to storage via the hatch. The operation is simple with engineering mimicking the original car.  What we don’t understand is why Kyosho decided to cover these hinges with similar material used to finish the wall-to-wall interior panelling.  Also, the panel gap around the perimeter of the hatch is poor, you can literally see through into the interior with the hatch in the closed position.  Lastly, the hatch strut support is shown here but fixed to the door and non-functional.  As for the interior elements in Beige all are executed in hard plastic.

Continuing with the rear, the lower section demonstrates convincing results.  Chrome work is on par with the rest.  Taillights with integrated turn signals are quality units in line with the front, this also extends to the lower centre reverse lights. 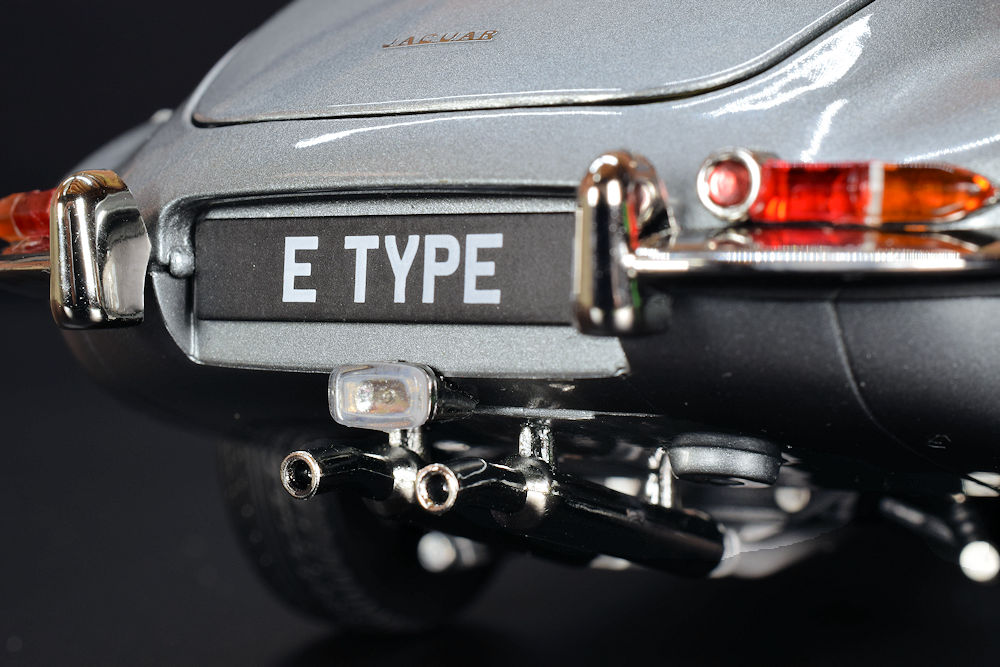 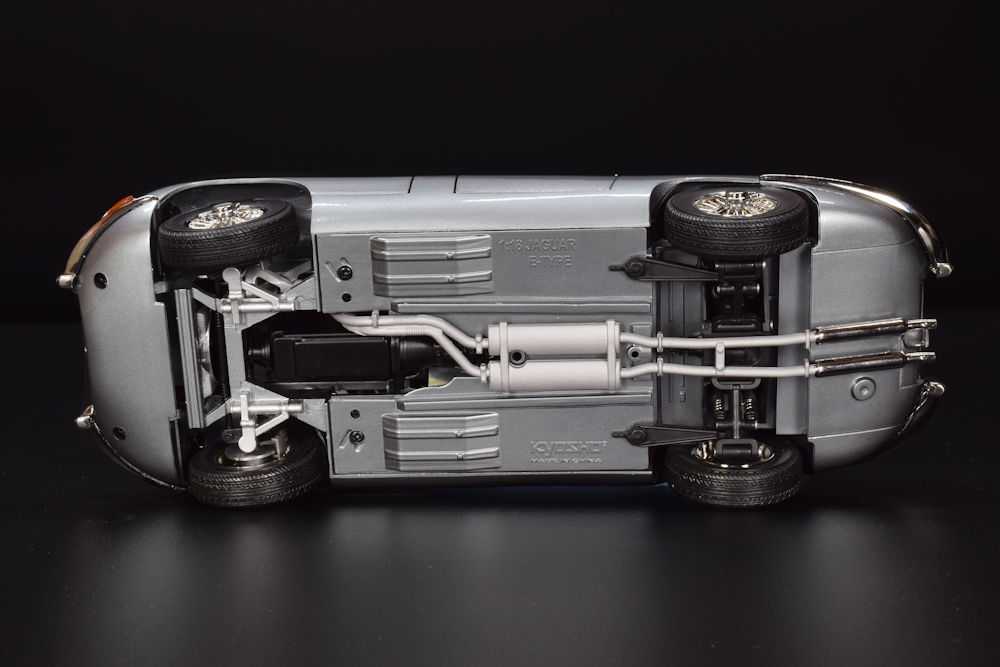 Exhaust tips along with the lower suspension bits seen from the lower rear perspective hint at the possible defined undercarriage.  What is supplied is a mixed bag.  The level of refinement used throughout is not consistent.  For example, the results of the exhaust after the upper chrome mufflers are a little too plastic-looking, un-finished.  On the positive end, the model is equipped with fully functional suspension – this includes two shock/springs in front and four in the rear.

As for stance, based on our observation, (and we are far from an authority on the E-Type), the stance is within Jaguar definition. We studied numerous photos, and there was no clear conclusion, some mirrored the Kyosho stance while others did not.  You draw your own conclusion. 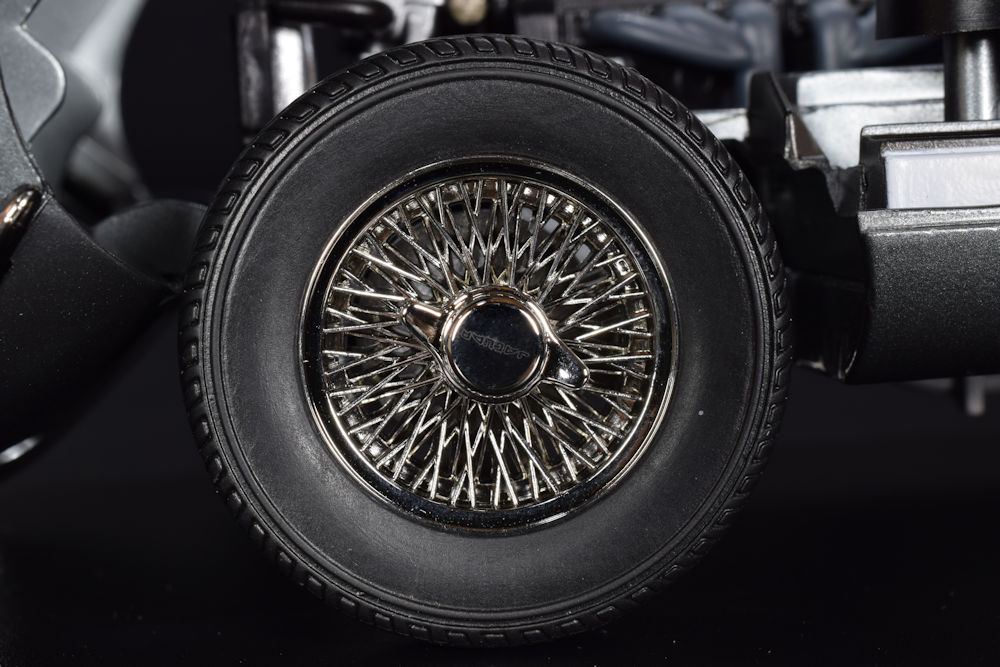 The wheels and tire combo aren’t perfect but honest effort overall.  Spokes are too thin or should we say the number of individual spokes is slightly excessive.  Also, the tire rubber is close but somewhat too large on the sidewall.  It seems all who have attempted to replicate these specific wheels have strived for perfection but have fallen short. Why is it so hard? 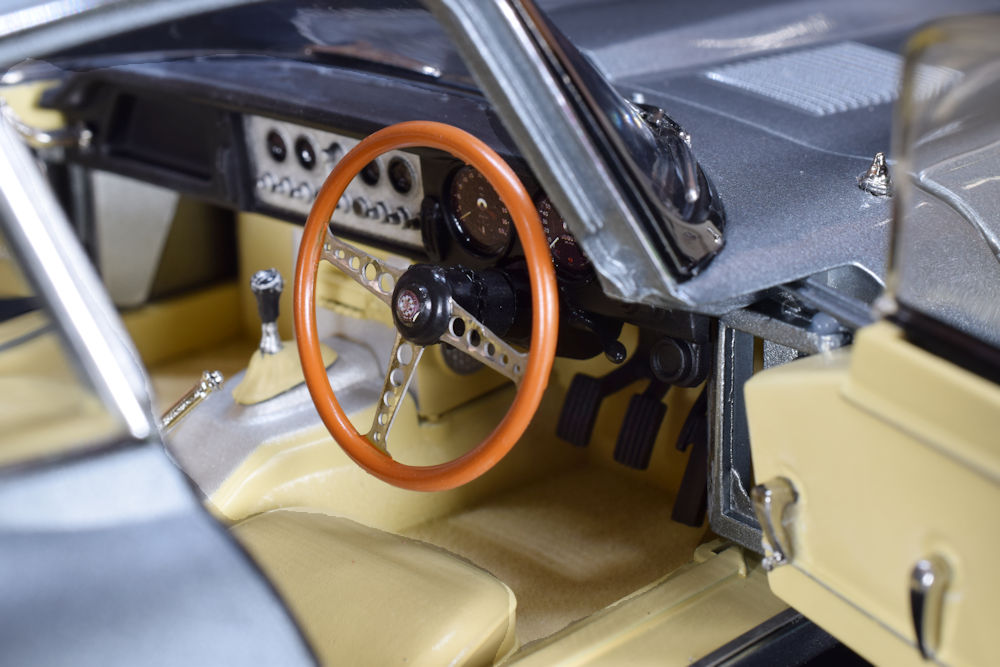 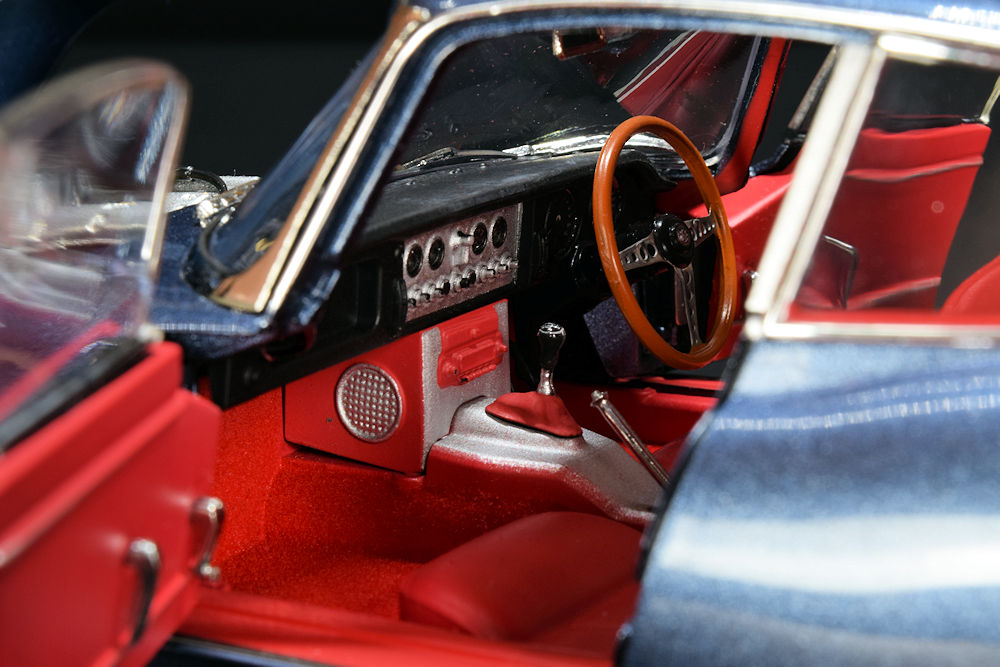 Interior-wise, good marks overall.  Flocking is found and runs up the side of the centre console.  We also loved the steering wheel with its mix of metal and faux wood-like parts.  The upper dash definition is good, but the centre section housing the radio looks poor and unfinished and the metal trim on the centre console is painted in place.  Door cards do feature chromed window crank and lock mechanisms. The bad, the canvas housing of the individual parts mentioned is lacking, it is completed with a solid piece of plastic with chrome stripping the only added detail. Where is the texture?

The Jaguar E-Type 1961 from Kyosho is the first true new release for 2021. All three colours will go on sale in April.  The model presents adequately but does have some challenges…  Great paint and overall shape come close to mirroring the original.  Priced at ~$200 US the Jaguar E-Type does have some shortcomings too, some of which include poor panel gaps, perimeter motor lacking definition and lukewarm interior. 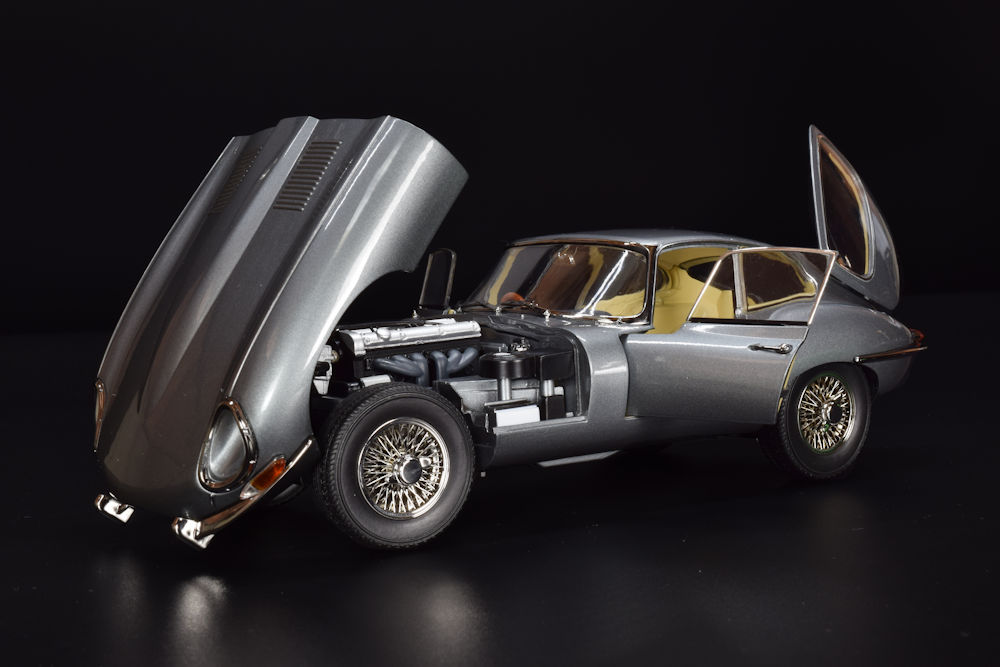 In quick compassion of the AUTOart release of the same, which for the record isn’t perfect either.  The Kyosho does lag behind on the overall excellence and refinement.  Cue examples:  gas filter accessibility, perimeter motor detailing – mesh on the heater box and interior refinement just to name some.

In short, we like the Kyosho Jaguar E-Type, but it did leave us somewhat disappointed.  In all honesty, we were anticipating a lot more from Kyosho based on some of their recent examples – one of which made the 2020 DiecastSociety.com Model of the Year for 2020, this is the Toyota Land Cruiser.  For those E-Type purists looking for the rare combination of refinement or the pure definition of one of the sexist cars ever made, this example falls short on some of the absolutes.  Enjoys the pics!