The Pagani Zonda had an extremely long goodbye, like one of those rock bands that keep going on farewell tours forever. The Huayra does not seem to get a much different treatment. The Pagani Huayra Roadster BC lines up with this tradition. As a collector, I don´t buy each and every rendition of a car or brand, and as much as I admire Paganis, I gave the Huayra BCs as much of a pass as the brilliant Model of the Year Zonda by Almost Real (waiting for the Cinque). The Roadster BC (like the Roadster) offers some flamboyance and with its new V12 and stiffer titanio-carbon is technically is a harbinger of the next generation Paganis, so that it lines up with the Zonda R (and later the Cinque) on my display, which was technically foreboding the Huayra. 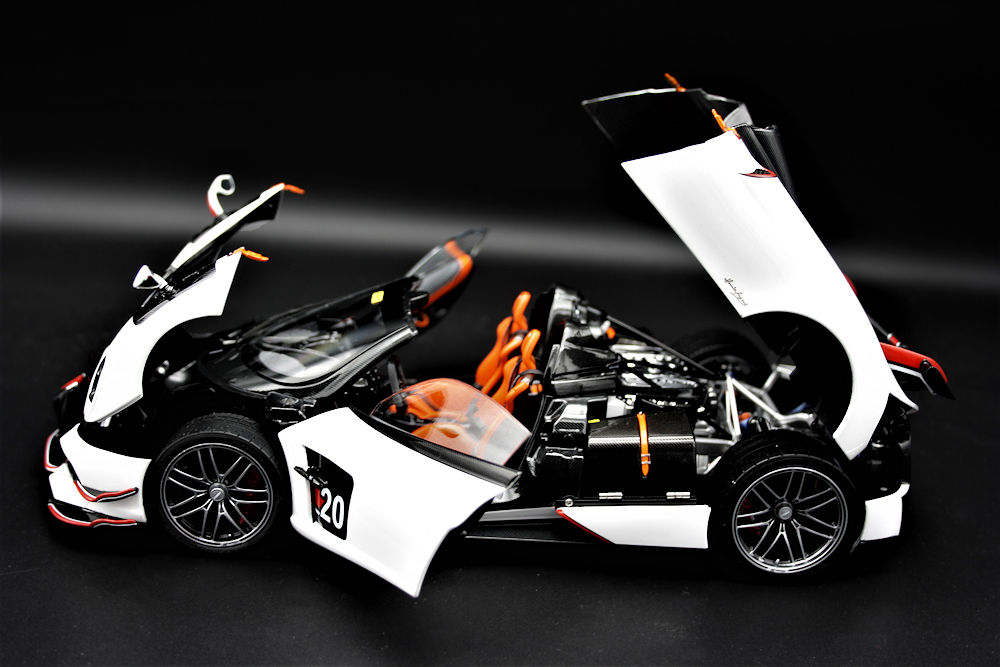 LCD now are the first to market with their models, with AUTOart a long way off, not to mention that there are not even rumours of Almost Real vaguely considering it. Of course, the most desirable colour option seems to be the presentation “grigio”-silver and is therefore sold out already. I had one by pre-order, but that had serious QC issues despite ironically having a little QC pass card: One of the engine cover´s hinges had come off completely so that it was literally half-unhinged, the oval switch panel above the screen in the interior was missing, leaving to gaping holes for the attachment pins, the front splitter was severely scratched. No idea how this can have passed QC, but I had to get a different colour to replace it, as “grigio” had become unavailable. So I went for white, and I am glad, because that quite honestly seems the best colour out of LCDs range, the other two being dark metallic red and orange. The bright red and white stripes on LCD´s Roadster BC´s black carbon centre simply look better with white or silver than they do with dark red and orange.

What is shocking is the sharp increase in price over LCD´s Huayra Roadster and you cannot help wondering whether the model justifies asking 300 Euros RRP. 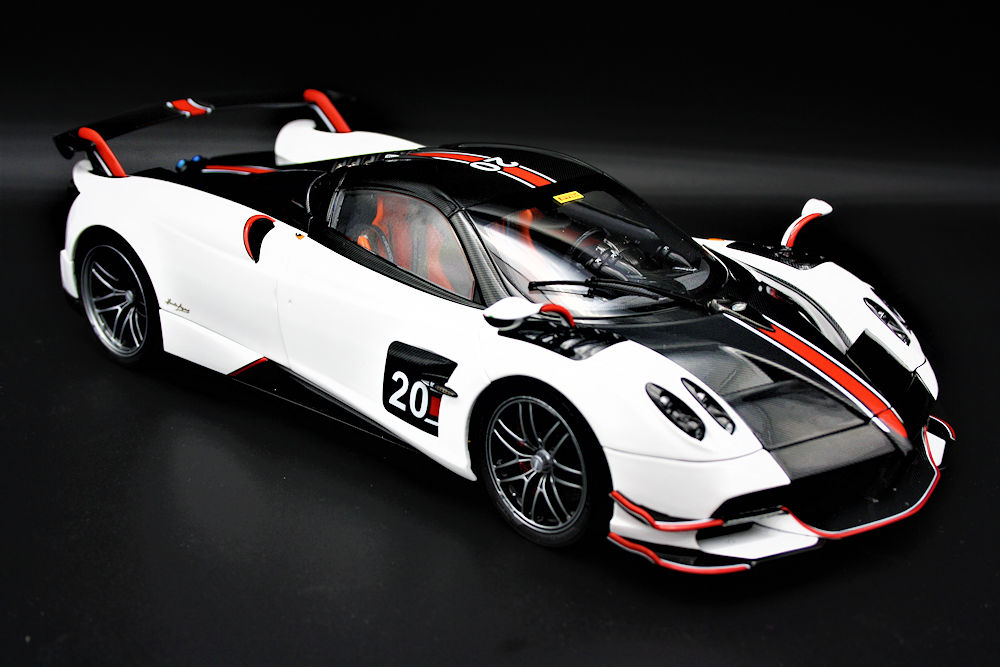 One of the differences is that you get carbon-fibre decals for the centre front and rear including the active flaps as well as the fixed-wing. These need to be handled with care, no sharps anywhere near, as they seem to take damage easily. My flaps look as if they are suffering from that. On the plus side, the carbon weave is extremely fine and sharp, which transpires clearly when the model is on display next to AUTOart´s appraised Zonda R. An addition in the same material and pattern are the canards on the front splitter, finely accented in red and white to echo the racy centre stripe, likewise on the wing mirrors that are not to be pushed into the wing this time, but come pre-assembled, rotating slightly, and on the rear diffuser. 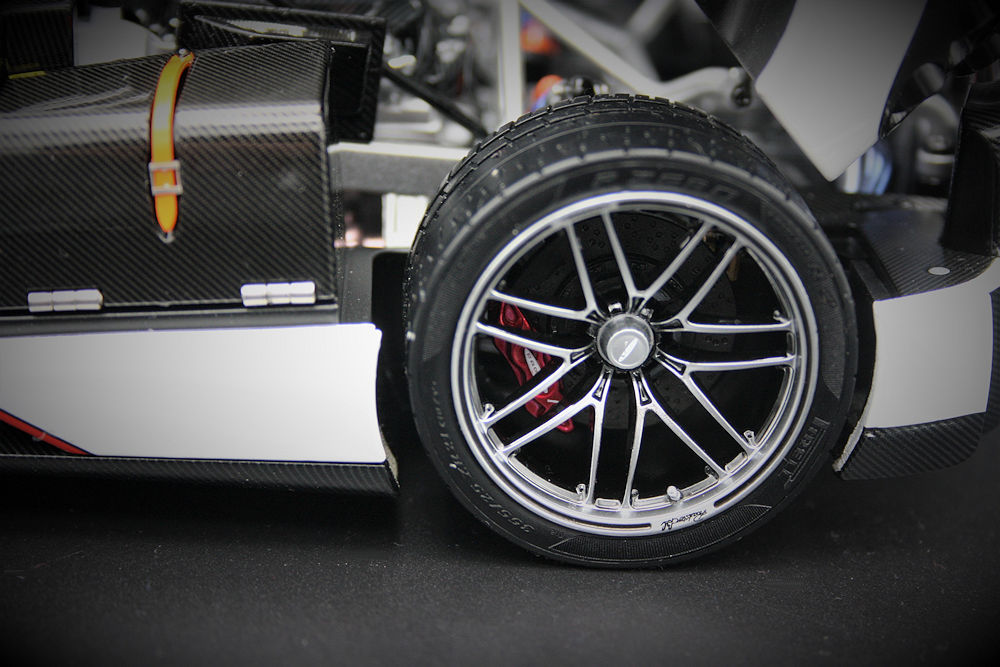 What has vastly improved yet again are the tires and wheels. The tires now have extremely detailed Pirelli PZero markings moulded into the rubber flanks and the wheels have valves and Roadster BC scripts on the rims. If the grey brake disks had a marble effect like the real carbon-ceramic original, you could mistake the photos for the real thing. 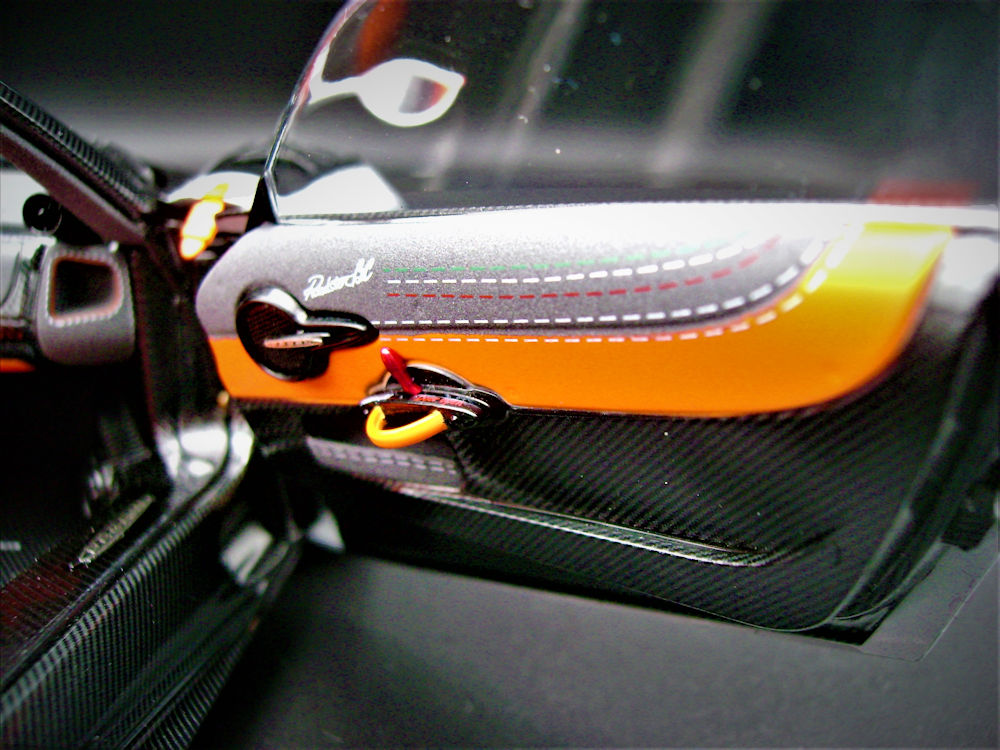 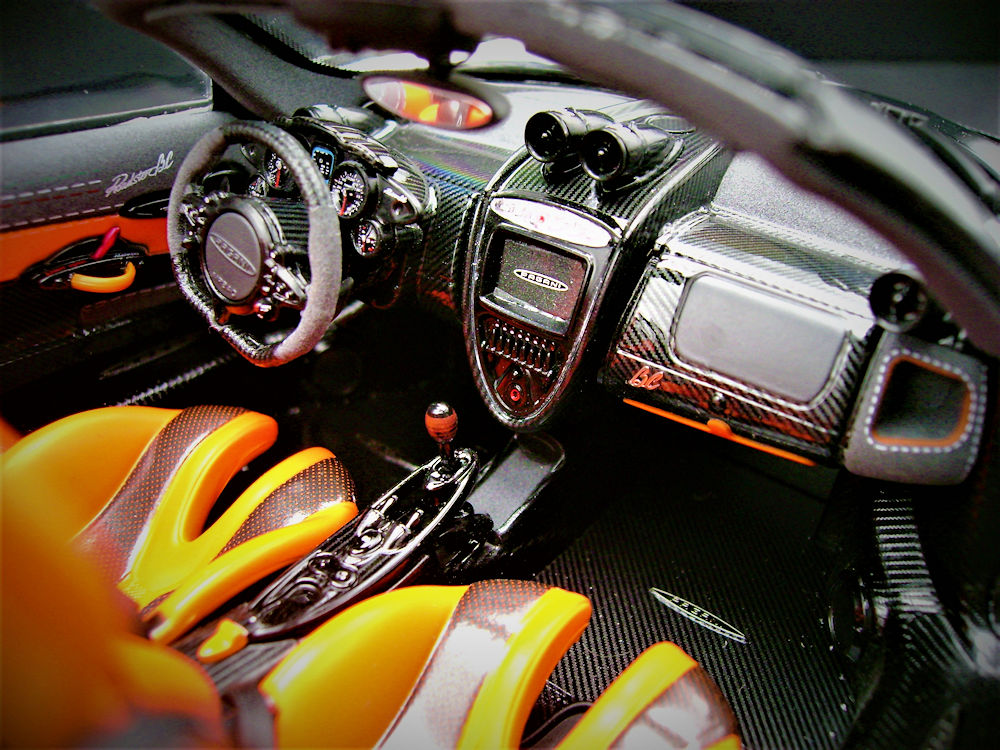 The interior is vastly improved too. You immediately notice when you open a door. The tub is no longer moulded carbon but as aptly received the same brilliant carbon decal treatment that LCDs Huayra Roadster had. The door trim has improved too. While the Huayra Roadster already had a two-tone trim, this now has become richer in that the top grey colour emits the looks of Alcantara while the orange is glossy to evoke a leathery look. The Italian tricolour stitching looked off scale on pictures of the sample, but looks absolutely fine here as around the little cubby holes on the dash. I love the Roadster BC script on the doors too. The door handle strap and release lever are present again too, this time with Roadster BC script and instructions were to pull it to open the door. The other astonishing feature of the model’s interior is the replication of Alcantara and carbon on something as small as the steering wheel and above all how well a defining detail like the wood on the gear lever has been replicated. Wowed like this the seats come as a bit of a disappointment. First of all, I find bright orange a very strange choice and it at least fails to replicate the presentation cars’ more subdued brown that went so well with the wooden gear knob. That is mainly where LCD´s sold-out “grigio” Roadster BC blatantly fails to replicate the presentation car that LCD prints onto the cardboard card supplies with the model. The other shortcoming is the over-shininess of the seats, both the orange as well as the dark decal that is to imitate perforated Alcantara. The four-point seatbelts seem to be plastic but serve the purpose. Behind the seats, the bags have now received an orange carrying handle. 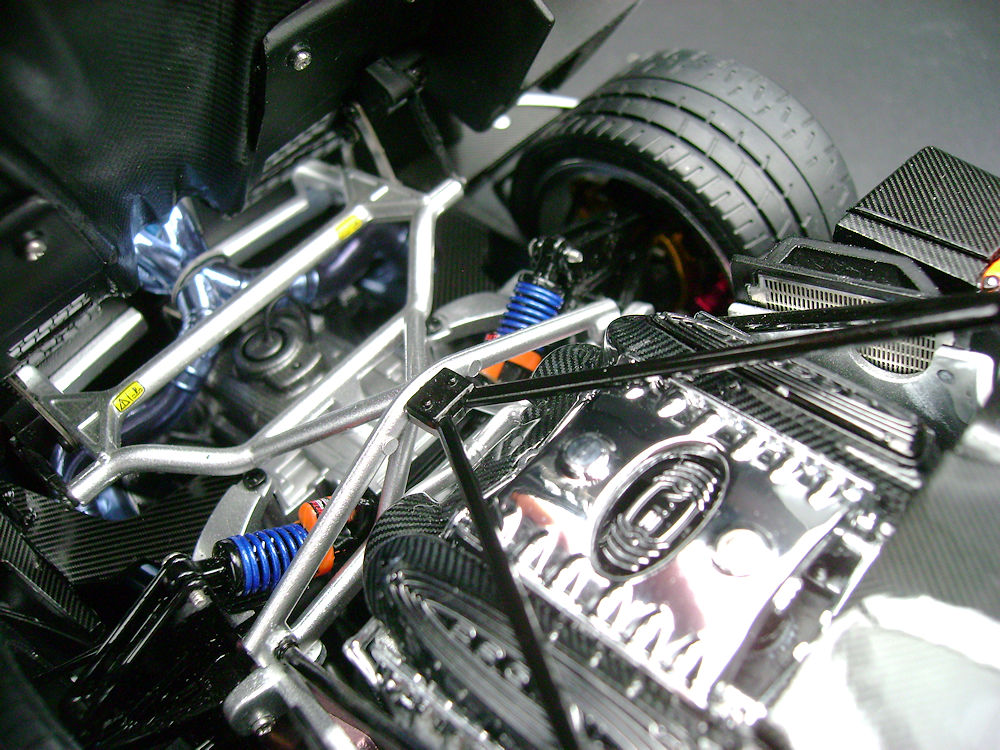 Once the doors are open (and only then) you can pop the engine cover open by tilting it up to the rear to reveal a reconciling engine bay. The two luggage compartments have been improved by LCD by now having hard plastic straps threaded through photo-etched buckles. The bags inside remain the same as on LCD´s Huayra Roadster, (perhaps luckily) with no colour accents to match the interior. The new AMG-sourced V12-engine has been replicated nicely, the pushrod-suspension-springs look the part, but don´t work in contrast to the front wheels. The biggest improvement, however, is the exhaust system which now literally shines in shades of blue, while LCD Huayra Roadster’s lacked lustre. 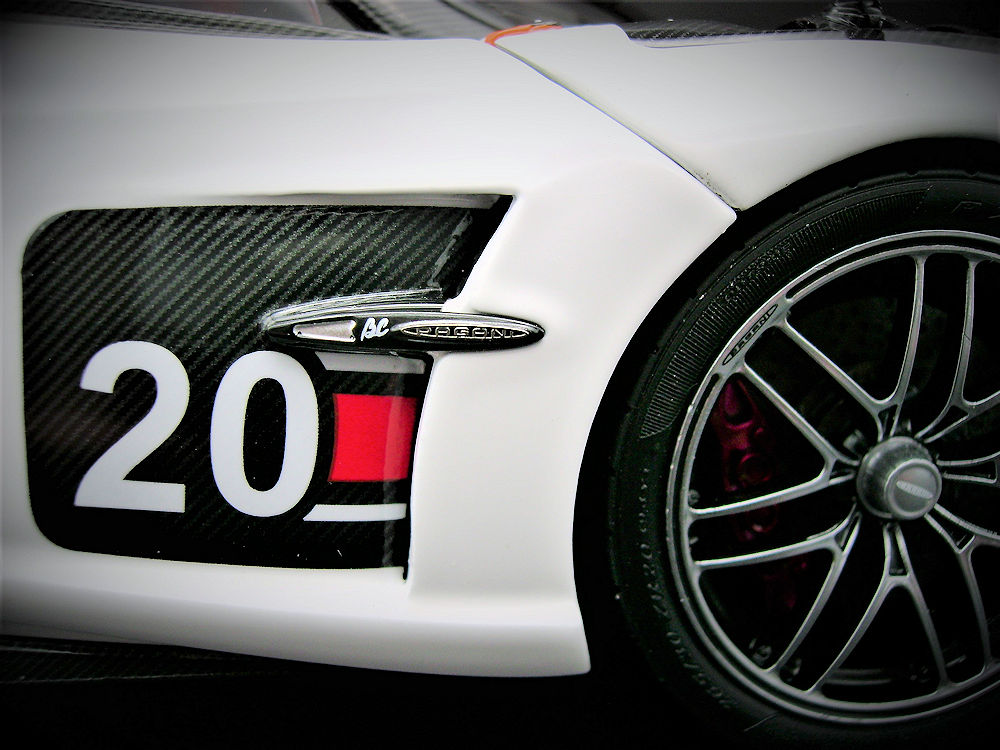 The taillights remain as good as on the Huayra Roadster as well and all the grilles are perforated and see-through all around the model.

The model is certainly good to very good model that may be worth the 300 Euros RRP, certainly is the 270 I paid. But as good as it is, it is not the final word on the Huayra BC Roadster model-wise. Apart from things mentioned above, if you look closely, the stripe on the hood is a little off centre, the hood does not fit 100% flush all around, which could be the limitations of metal, and the paint is caked so thickly that the fuel door has almost become unrecognizable. In other words, the bar is set very high by LCD, but there is room for improvement for the AUTOart version, particularly by replicating the presentation car more accurately instead of going for a standard “one fits all” interior. We all know AUTOart can surpass it, but we also know that AUTOart does not always do what it can. So that leaves you with a tough decision about the LCD.