Mercedes-Benz was enjoying vast status in the 1930s. Their reputation as the maker of fast, stylish, and luxurious cars was at its height, with excellent models such as the SSK sports car, the huge 770K Grosser limousine, and the first ever diesel car, the 260D, included in the prestigious repertoire. However, perhaps the greatest of all was the 500K Special Roadster of 1936. The 500K Special Roadster was exceptionally beautiful and prohibitively expensive – with only 26 examples being produced. Instantly, it became renowned for its magnificent coachwork, extravagant opulence, innovative features, and above all, the potent supercharged (Kompressor) V8 engine. It was the car that best emphasized and epitomized the height of Mercedes-Benz’s exclusivity and exquisiteness in the 1930s, and today examples are highly prized and worth millions of dollars at auction. 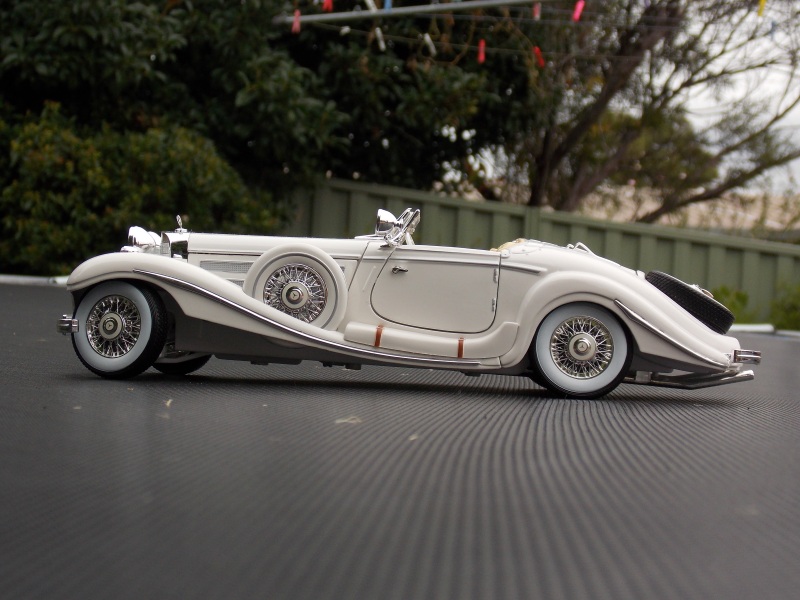 It is fitting, therefore, that Maisto should choose to model their 1:18 1936 Mercedes-Benz 500K Special Roadster as part of the more upmarket ‘Premiere Edition’ range – meaning it flaunts more function, refinement, detail, and a better display stand than the standard ‘Special Edition’. They also chose to offer it in two different specifications; the first being a dark blue or red. The second model is exclusive to an off-white, and features an additional two cased side-spares and running-board luggage compartments –features that the first model forgoes. Both versions look stunning, but the latter’s supplementary side-spares add an extra elegant touch. 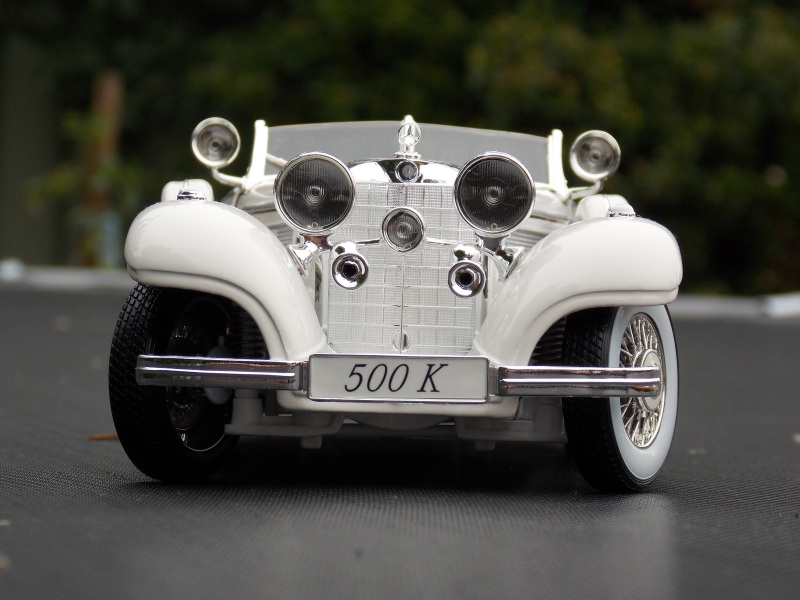 Maisto has captured the 500K SR’s beautiful lines very well. The exterior design highlights–such as the prominent fenders, chromed vertical grille, and the protruding round headlamp units – are all recognizable archetypal 1930s design cues. Unfortunately, the chrome plastics, particularly on the windscreen, feel a little cheap – but not to the point of being unacceptable. The Mercedes-Benz logo is also somewhat fragile and thin, so don’t call this one a ‘diecast toy’. 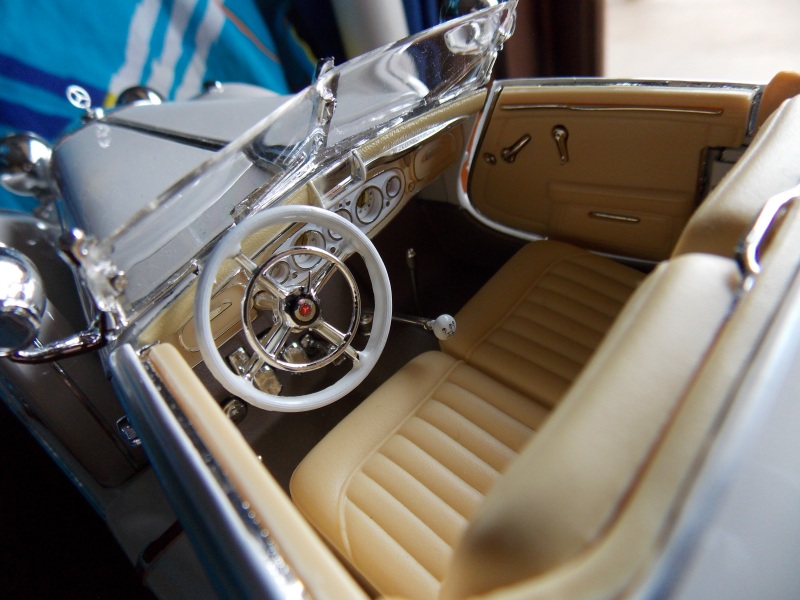 If the exterior was good, the open interior is excellent. The ornate dash is intricately and neatly painted– and the analogue instrumentation is not just a sticker-on-a-flat-surface! Rather, Maisto has placed a neat decal inside a depressed circle on the dash – so that it much more realistic and premium. Bravo Maisto! It doesn’t just stop there, however. The gear stick bulb is brilliantly painted in white, with the little gear indications indicated in gold. The cabin floor is not carpeted, understandably, but instead of just hard plastic it has an interesting ‘tissue-paper’ feel. Likewise, the class of plastics used inside, especially on the well-molded seats, is high-grade and actually looks like leather – making the interior of Maisto’s 500K Special Roadster almost mistakable for a premium model. The only disappointment, in fact, is the chromed and cheap-looking foot pedals. Despite this, another plus is folding rear rumble seats – which echo the relative detail and quality of the rest of the interior. 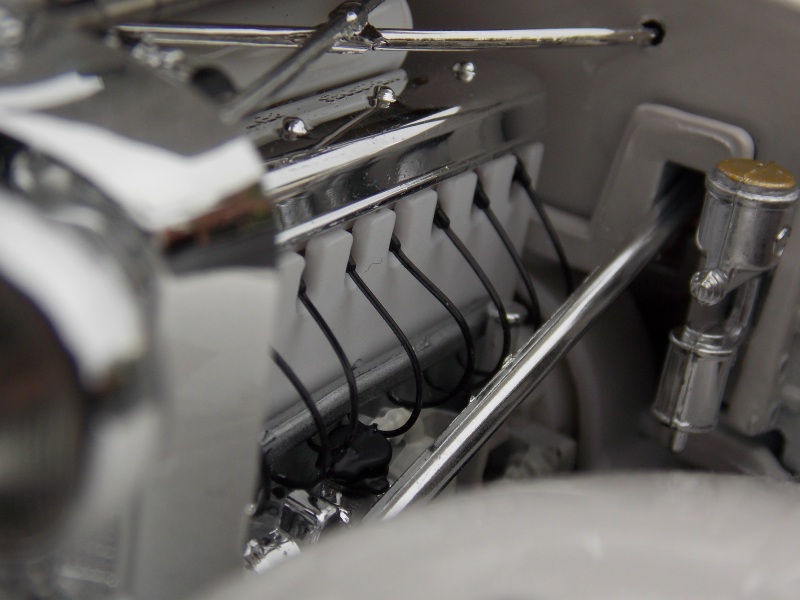 Opening the two centre-hinged bonnet-flaps reveals an acceptable engine. It’s not wonderful, but at its price, it’s what you’d expect. There is, however, quality here too: the engine fluid cap is not just painted gold, it also has minute German text stamped on it! You’ll need a monocle to read it, but still, what a lovely touch! Likewise, the two exhaust hoses which stream out of the side of most Mercedes-Benzes of this era are not just bits of chrome plastic, like Bburago did with their 1:18 SSK – but rather detailed springs. They look far more realistic than the alternative would have. 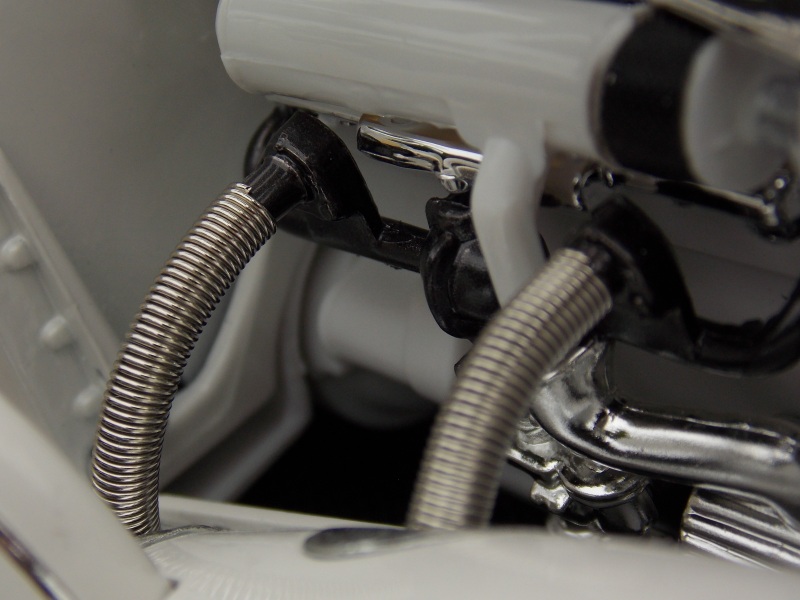 Yes, despite being a budget brand, the 500K SR is perhaps Maisto’s best effort. The level of function, detail and refinement are surprisingly good – and there is very little ‘corner cutting’. Of course, the quality and feel isn’t up with AUTOart – but hey, neither is the price. And for just $60-70, this is an astounding bargain: especially so, because it actually measures 1:16 scale, not 1:18. At any rate, it is well and truly a splendid replica of one of history’s finest cars. 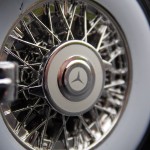 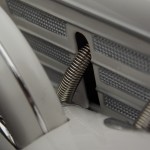 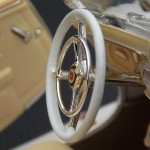 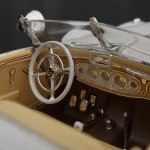 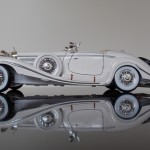 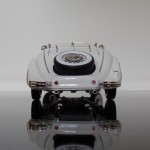