39 comments were attracted by the mere announcement of this model on DiecastSociety.com three and a half years ago, a heated debate, most of it on the subject matter, triggered by the entry “Why oh why would anyone want to buy the real car in the first place let alone waste your money on a scale model of it?”. Three and half years later the real car, denounced as “Stinker” back then, has proven itself and gets an improved facelift, and prices for models are going through the roof, e.g. currently on eBay: 399 $ for this white version here, 349$ for a grey one, 270$ pre-owned – each without shipping and customs+taxes, and the red one featured in the brochures seems unavailable altogether. That´s obviously how well they sell!

So what do you pay for, other than the enthusiasm for an automobile design by award-winning automotive designer Peter Schreyer, engineered by former BMW M Vice President of Engineering Albert Biermann – some serious German design and engineering that has not failed to sting their former employers and has put up some serious competition? The model once came in three of its 9 colour options: Panthera Metal Metallic, High Chroma Red and this Snow White Pearl. As you can see, the colour is applied smoothly in all places and has a fine pearly sparkle. 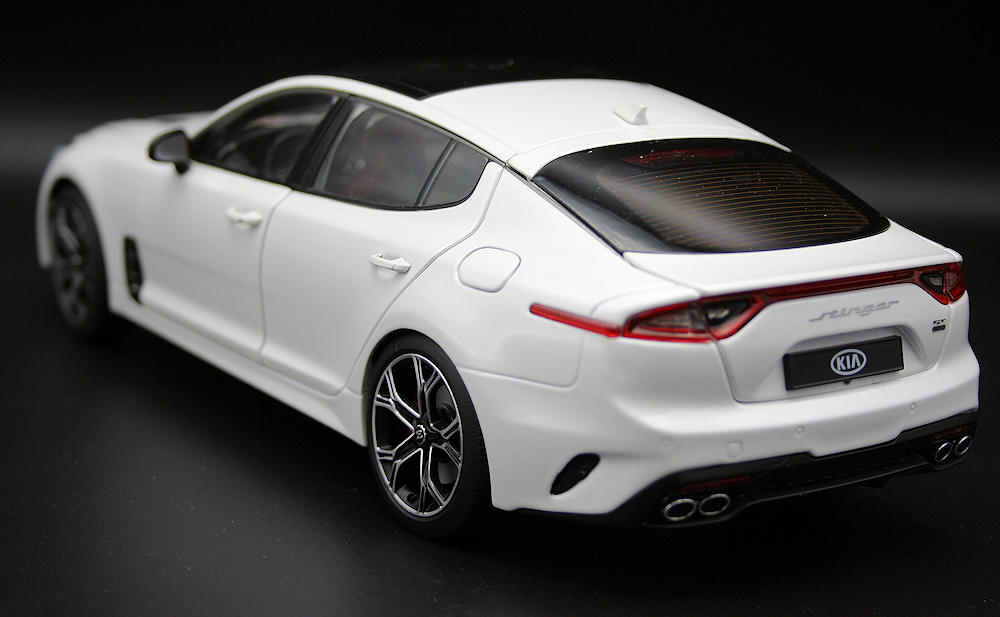 Each colour was either available in a US specification that has amber side markers in the headlights upfront, while this Korean market version has white markers (like in Europe), that looks a little better on the model than its amber counterpart IMO. The LED daytime running strips are replicated nicely with a jewel sparkle structure in the chrome, the front turn signal section replicates the separate LED spots in great detail and the detailing of the headlight projectors is great. The US version further has plastic Kia badges centre front and rear, while the Asian version has an E-badge front and a large photoetched “Stinger” script across its trunk, while the US “Stinger” script is much smaller on the left of the boot lid, opposite the GT AWD badge on the right. The same attention to detail as in the front lights has gone onto the taillights, particularly the white section showing an LED cluster and the white reversing lights inside a black frame. The controversial red side reflectors (that stand out most on this white version while virtually disappearing tone in tone on a red car) are discernable as the separate part that they are on the real car. 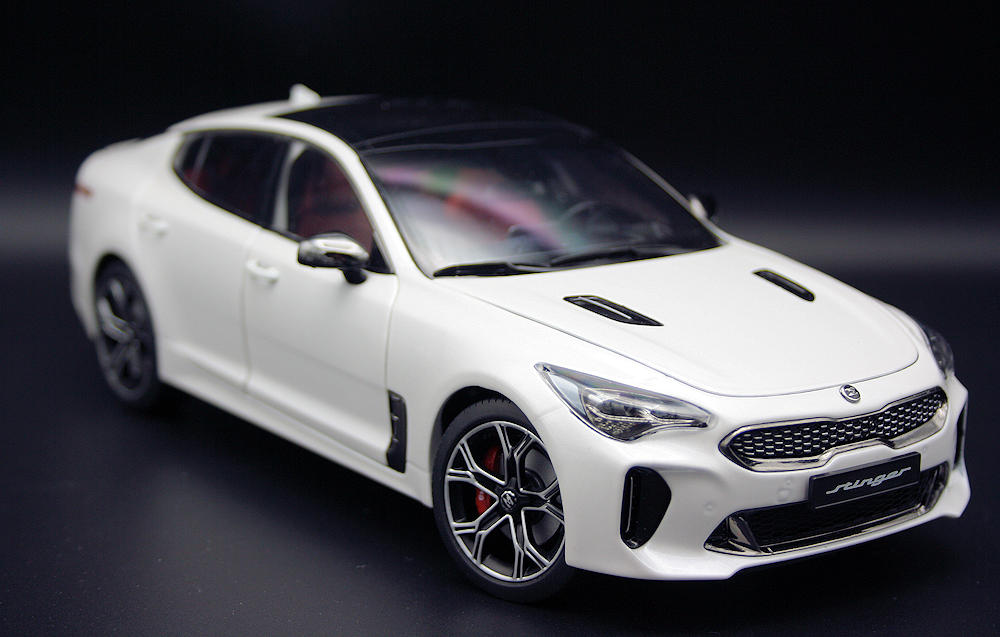 The centre of the rims has a Kia or E badge in accordance to the respective US or Korea spec, the Y-spoked 19” GT-spec B-Type Machine Finish rims are correctly Dark Grey and silver, although the silver paint, in particular, is a thin layer easily damaged. While this Asia dealer edition for once did care to highlight the fact, that the GT comes with Brembo brakes, the tires are left unbranded. All four corners are fully sprung, the front ones steerable, needless to say. Like the real deal that comes on Continentals, 225/40 R19 front and 225/35 R19 rear, the slight difference is translated into scale with the rear rollers having a slightly wider tread. This is remarkable, as cutting corners (and costs) here would probably go largely unnoticed.

What I like a lot is the dark chrome of the radiator grilles´ frames, the folding mirrors, the door trim and the side vents behind the front wheel, not too shiny, but not just black either. Unlike the lower grille mesh and the mesh in the rear diffuser, none of the small vents, nor the main grille are really perforated, some of which is true to the original: It´s one of the complaints about the real car, that on the hood and in the back of the rear wheel arches it´s a non-functional mere design feature (but then, hey, Honda Civic Type R). The large quad exhaust tips only have a 2mm cavern too before black paint represents the rest of its depth. On the flip side, the exhausts are a separate part from the rear diffuser and realistically stick through a cut-out. 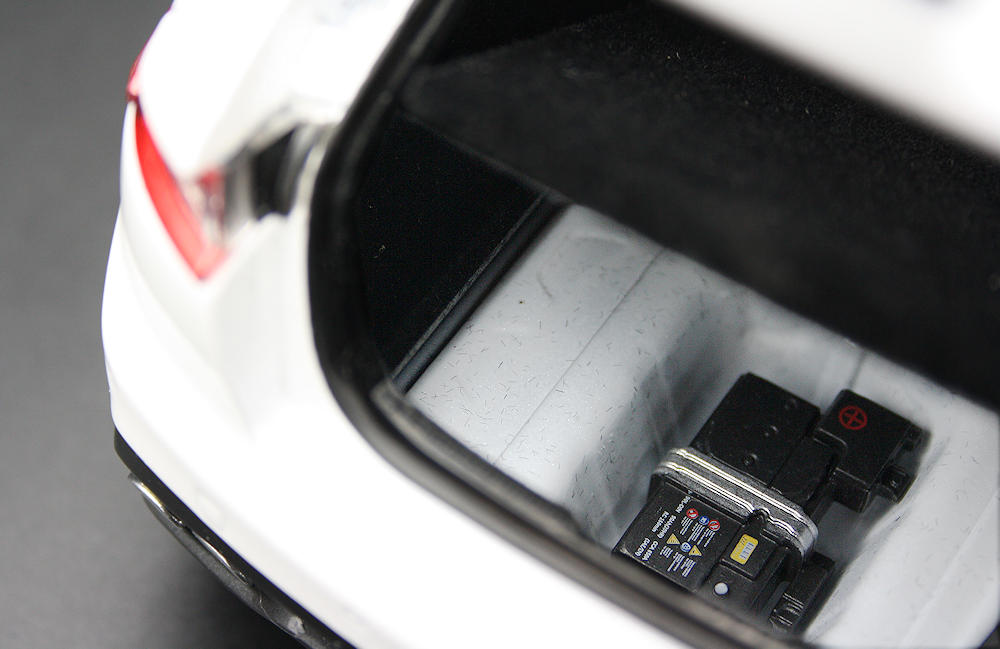 The liftgate is hinged on small doglegs but has nice supporting struts to distract from this rather cheap solution. The trunk opening is lined with black paint to replicate the rubber seal, a structured black plastic piece marks the threshold, the trunk itself is carpeted and its floor can be lifted up to reveal the detailed battery location, where you´d expect a spare wheel in real life and most of us expect nothing in a model. Very nice! This is just the kind of attention to detail in a full access diecast, I love. In the same department, we have the cameras above the licence plates front (in the grille) and rear, an opening fuel door, which is risky because it´s next to impossible not to create gaps in the body, especially when it wraps around the cars left shoulder line like on a Stinger. Especially in white, the model reveals gaps on each of its opening parts, not terrible, but visible because the generous paint application does not create sharp, but rounded edges and unduly over-fills creases replicating panels joining or sensors. A laudable exception is the rear doors joining the C pillar so tightly, so that you might suspect, that the rear doors are sealed. Luckily, they are not. 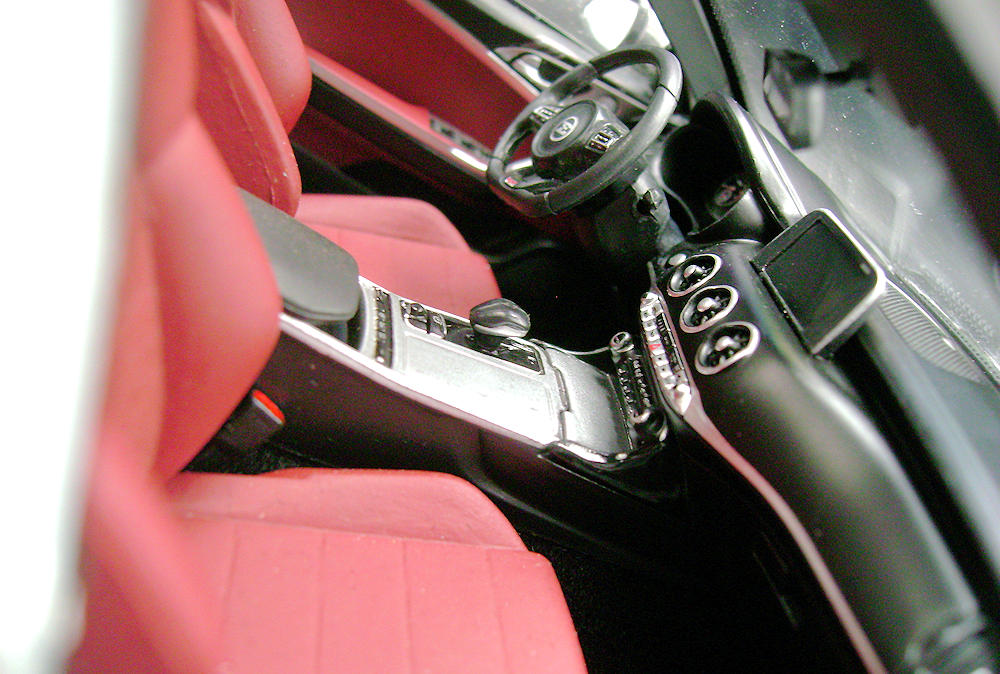 No matter which colour or side of the Pacific spec, the interior is finished in the Dark Red option that enhances the interior to a tasteful Italian style level. The colour mix of red, black and silver gives it a sportily luxurious look. The floor is carpeted as a matter of course, just as it has fabric seat belts with photo-etched buckles. Generally, I´d rate the interior´s details clearly surpassing Norev´s best efforts, but of course nowhere near what Almost Real and BBR have proved able to do. A sad exception is the clumsy rear-view mirror and the touchscreen left without any display. 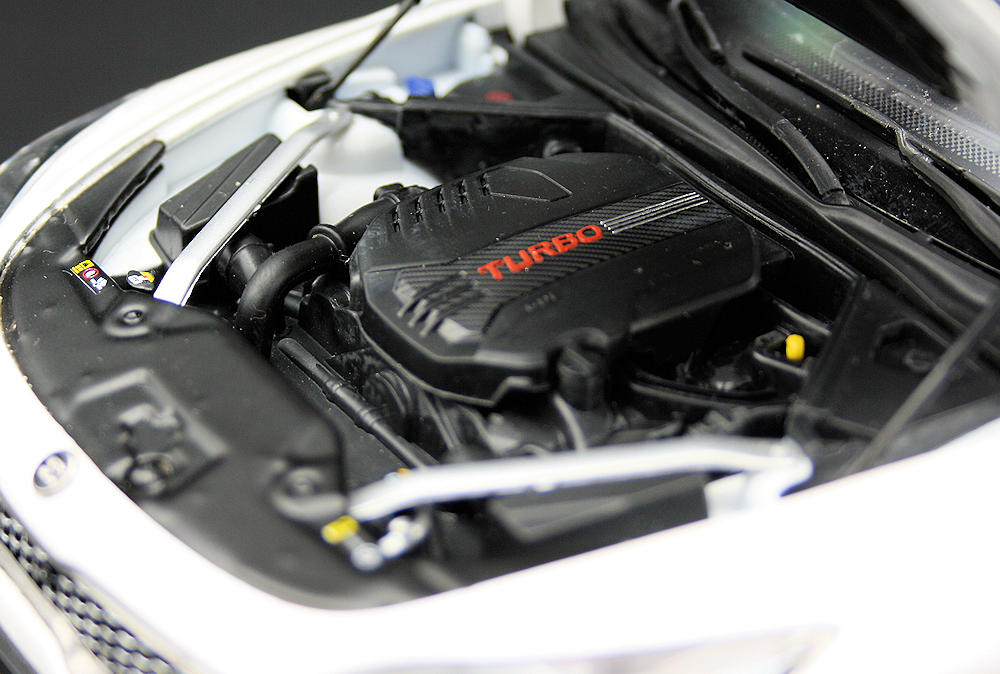 The engine underneath the strutted hood and silver crossbars seems to be made from a single mould, some of it painted silver, including hoses and cables, with some stickers and colour added for more realism: It´s got a carbon pattern on the engine cover, a Turbo script and GDi engraving, a yellow dipstick handle and oil filling lid in the absolute correct place, a blue little too small lid for the screen washer water in roughly the correct spot, marked lids for coolant left and right of the radiator and warning stickers upfront. You´ll find each detail as in the real Stinger´s manual. Not much is to be said about the undercarriage, other than that it seems rather toyish down there, but better than a closed flat floor pan. 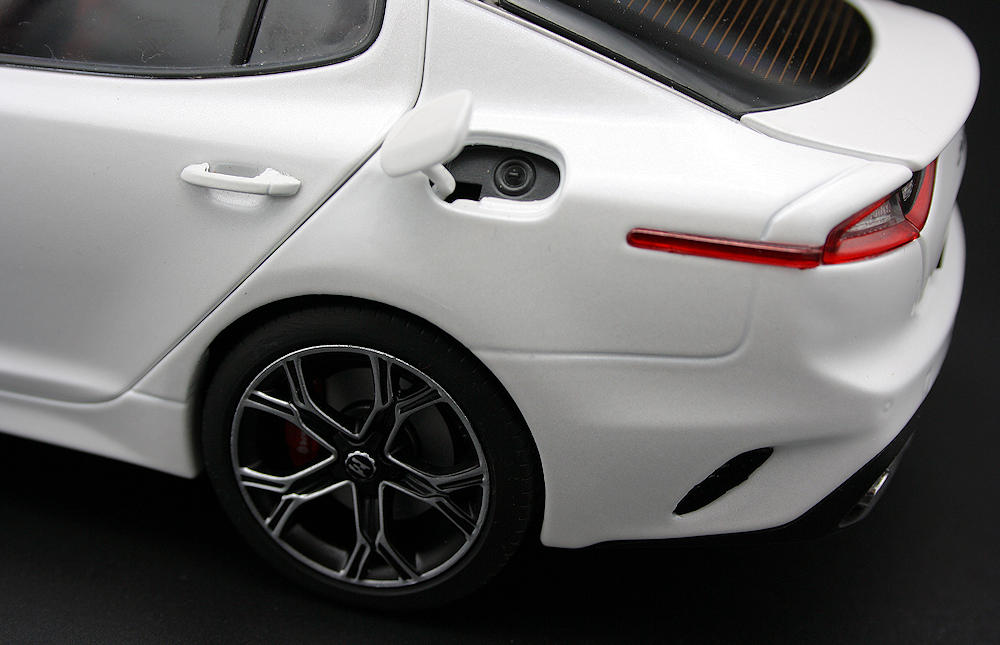 So why would and obviously did so many want to buy this scale model? Well, because the real car clearly doesn´t fail to impress and for the original price the model was good value for the money, just like the real thing in real life: You get nice attention to detail usually found in more upmarket models. No deliberate cutting of corners, but best efforts made. Plus, in contrast to its real counterpart, it resells at a profit. If you were an on-release buyer, your money clearly wasn´t wasted. If you were not and are trying to get one now, good luck in finding one and be prepared to feel the sting… in your wallet. If we´re lucky, the same mould will be used again to produce the Stinger´s facelift that goes on sale this year, as nothing about the diecast shell has changed: Extra fins on the lower grille, different colour split on the rear lights (general shape does not change), new rims, slightly different door trim. That´s it! So anyone who has bought the mould off MINIKRAFT when they went out of business would be foolish not to seek returns on their investment on this occasion. Best colours IMO would include the new Neon Orange as seen on the promotion car(s) or one of the two blue shades.