August 2021, after a series of rumours and teasers, Automobili Lamborghini SpA dropped a bombshell during Monterey Car Week with the unveiling of the LPI 800-4, a V12 with a supercapacitor like we’ve seen on the Sián in 2019, over 800 hp combined power, based on the current Aventador tub but here comes the kicker, they called it the Countach LPI 800-4 as an homage and a 50th-anniversary celebration of the original Lamborghini Countach prototype from 1971, but it is a far cry from the original Countach from the Seventies and Eighties.

The Lamborghini Countach is a legend on wheels, we all acknowledge the fact the Miura was the first supercar in the world, but when that beauty was succeeded by the Countach, Lamborghini really became the maker of dreams you could drive, a massive V12 behind the seats in a ‘front-to-back’ position, hence the LP name (Longitudinale Posteriore), initially presented with an experimental 5-litre engine, by the end of 1973 the actual production version became the Countach LP400, with a 4-Liter V12. 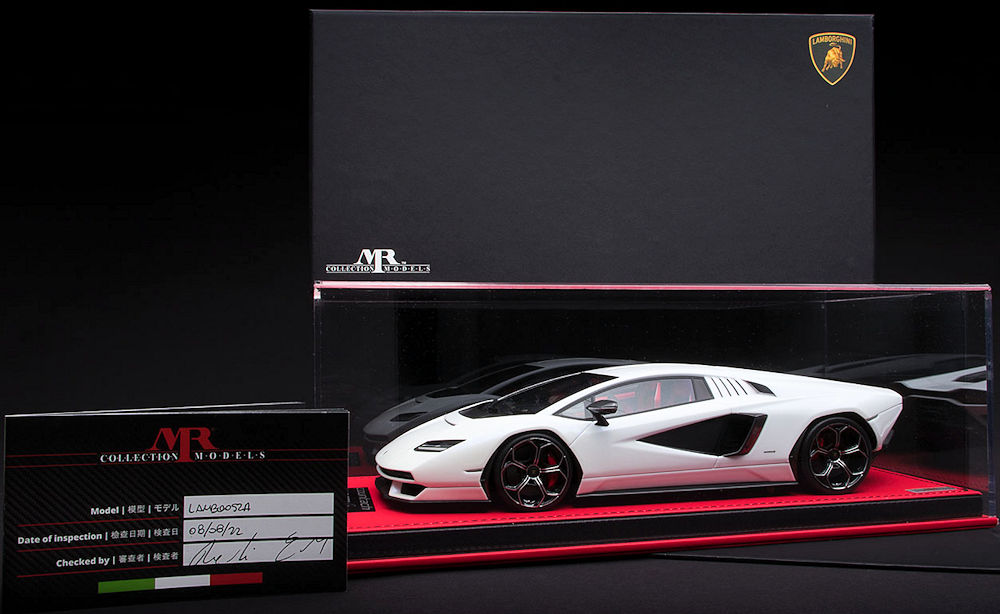 And let’s not forget the most important introduction with the Countach, the Lamborghini doors! Upward opening doors on a road car, now that was innovative in the early Seventies, and these would remain a Lamborghini trademark ever since on their V12 flagship models, even today, on the Aventador, where the doors still go up, but now also slightly outward to allow easier access. Some purists love the Countach LP400, also referred to as the ‘narrow-body’ and the ‘persicopio’ because of the strange way the interior rearview mirror used a tunnel in the roof resembling a periscope, but things started to get serious with the introduction of the Countach S by 1978.

Thanks in large part to the requests from Walter Wolf, we now had a Countach on steroids, in true 80’s style they’ve added a deep front chin spoiler, wide add-on wheel arches, a modified suspension, and massively wide ‘telephone dial’ wheels. At that time the widest possible tire was created by Pirelli specifically for the Lamborghini Countach at 345mm fitted to the rear axle and if you really insisted, you could have a big rear wing added too, although it wasn’t fitted inside the factory at first as it effectively slows down the Countach at top speed and offers no additional downforce at all… but it looked mean nonetheless. 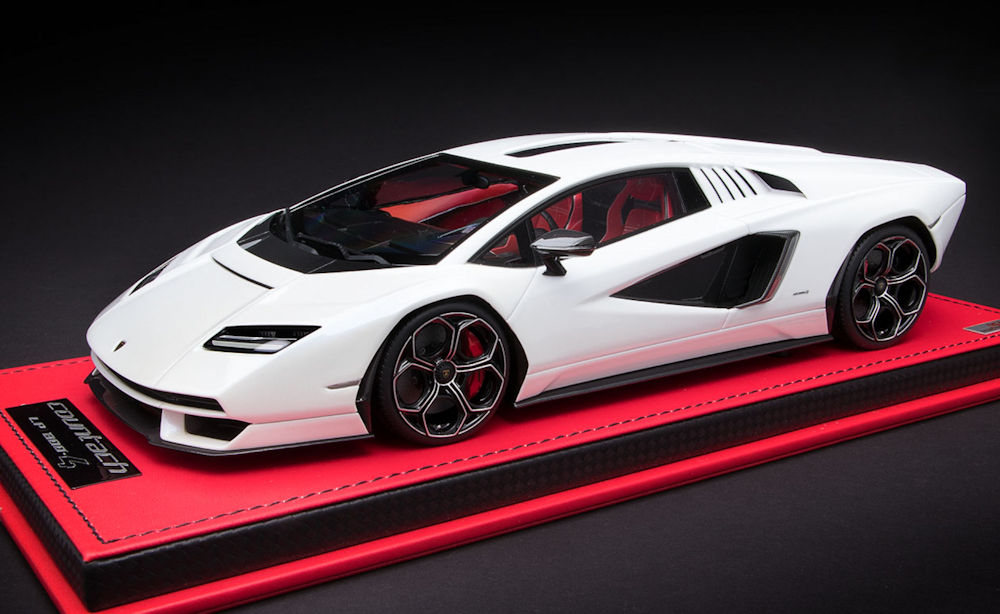 After the Countach LP400 S Lamborghini enlarged the engine to 5-Liter to create the LP500 S (not LP5000 S as AUTOart called it) and subsequently the Quattrovalvole, the Countach remained in production until late 1989, but was replaced with a much smoother, less angular styled 25th Anniversary edition in 1988, so a lifespan of about 15 years, and with the S and QV models from the Eighties, a lot of wealthy individuals today have fond memories of the original wide body Countach, many are able to own one today and for Lamborghini to suddenly bring the name back on a, what some people call, a ‘reskinned Aventador’ just didn’t go down well.

Automobili Lamborghini SpA created the Countach LPI 800-4 as the 50th anniversary present to the original 1971 prototype, and with the internal designation of the Countach at that time being LP112, only 112 units of this new Countach would be made and as you would expect, all of them were already sold out by the time most of us got to see the real car in California in August 2021, the MSRP of about $2,600,000 before options didn’t seem to deter ultra-high-net-worth individuals to sign the order form. 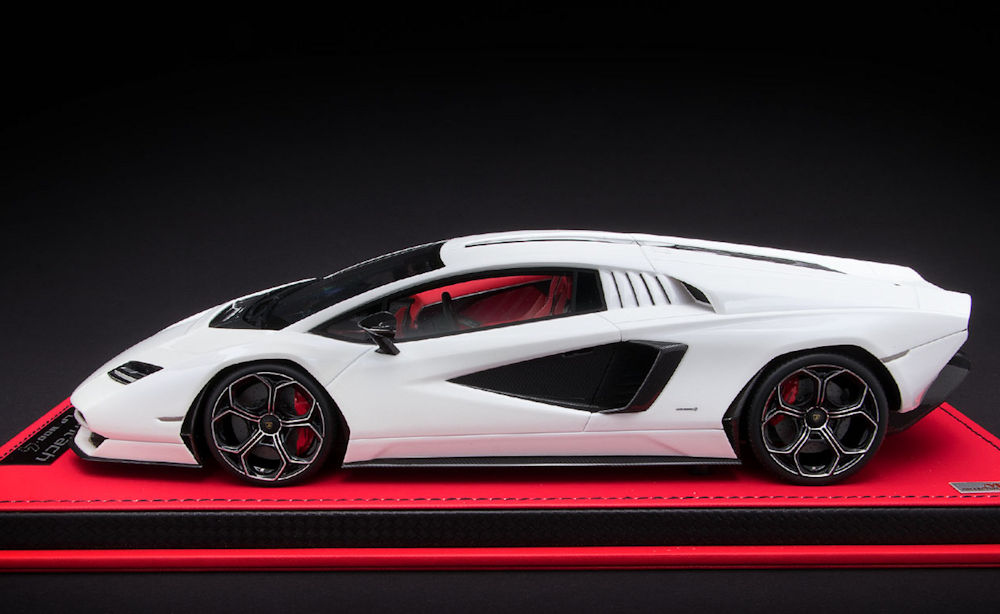 Fast forward to August 2022, one year later, and I finally receive the MR-made 1:18 scale version of the original press release and presentation version of the Lamborghini Countach LPI 800-4, finished in Bianco Siderale over a Rosso Alala interior, just like I prefer to get my scale models.

The first impression is amazing, the paint actually has that slight blue hue over it, just like the real car, and the red interior comes with all the right details: white stitching, black ‘S-style’ banding on the seats, carbon fibre dashboard pod, and a very detailed central console display.  All very nicely done by MR, I’m liking what I see so far. 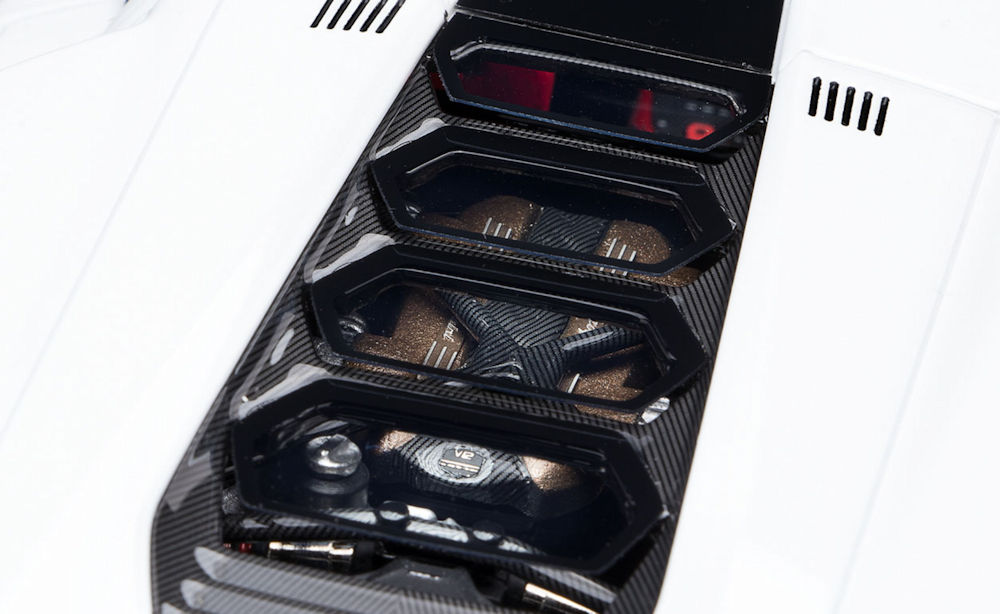 With the large glass planes on the engine cover of the Lamborghini Countach LPI 800-4 MR had to make an effort on the engine detail, and as far as I can see through the closed cover, it looks alright, there is a lot of glossy carbon fibre, the manifolds are painted gold, and it just seems fine, no complaints, same with the wheels, carbon ceramic disk brakes, and the wheels.  They all look good for a 1:18 scale model, same with the headlights and taillights, MR used clear lenses up front and nice red hexagon Sián-derived taillights, it’s all good.

Inside the wide and thin front air intake, there is the Countach logo displayed, and if you look really close at the rear, just above the exhaust, there is another Countach script in the black grille, and naturally the LPI 800-4 designation on the side, this models looks to be just about perfect so far. 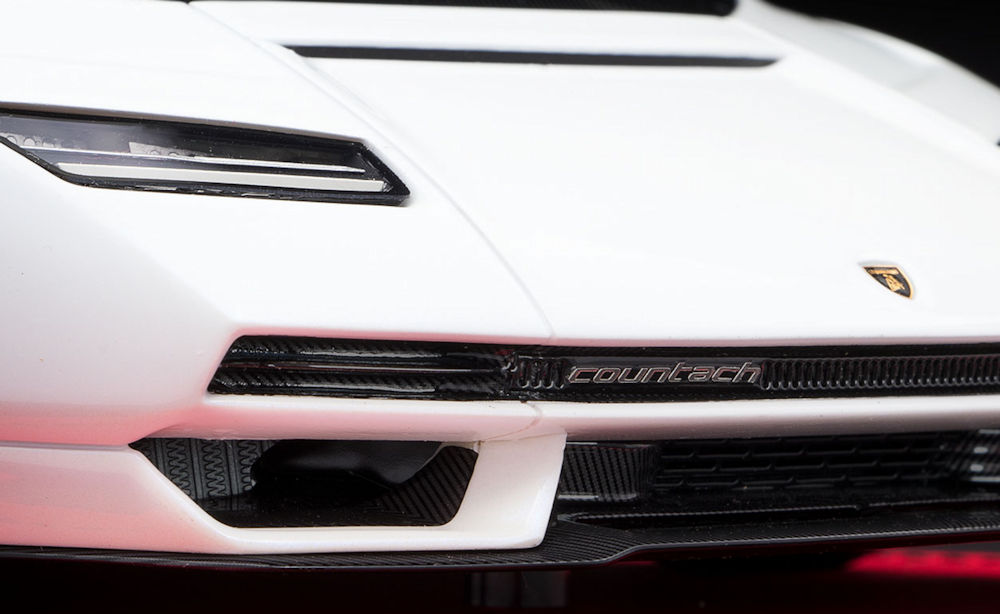 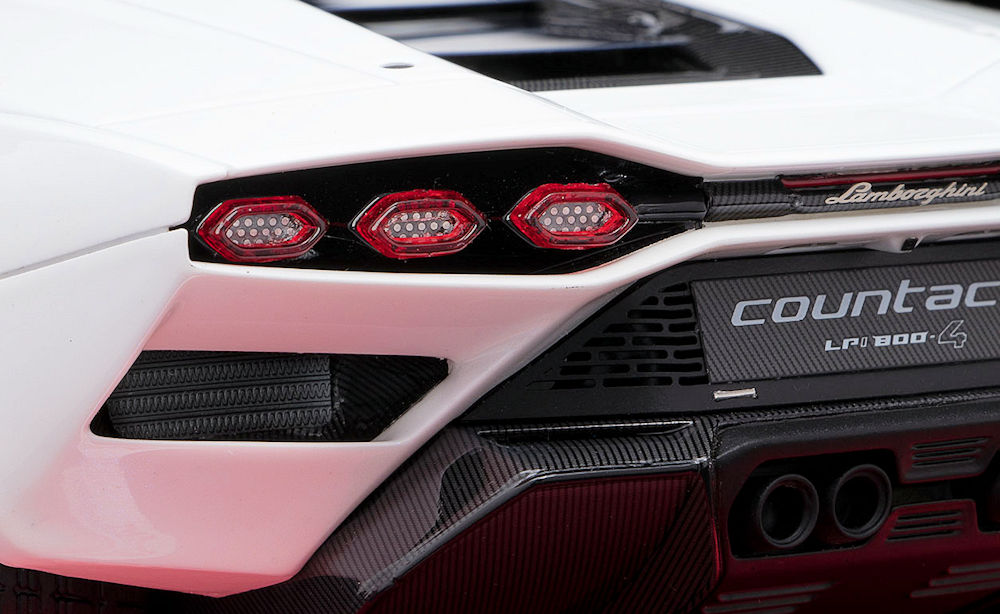 Until I start taking a closer look at some detailed shots, especially the rearview mirrors on the doors, their carbon fibre looks great, but that small Lamborghini script is upside down! On both sides, so MR did create two different decals left to right, but they got fitted on the wrong side respectively, how did that get through quality control? And it isn’t just my specific unit, I’ve since heard it on every single one of these, and apparently, MR made the same mistake on the Sián! 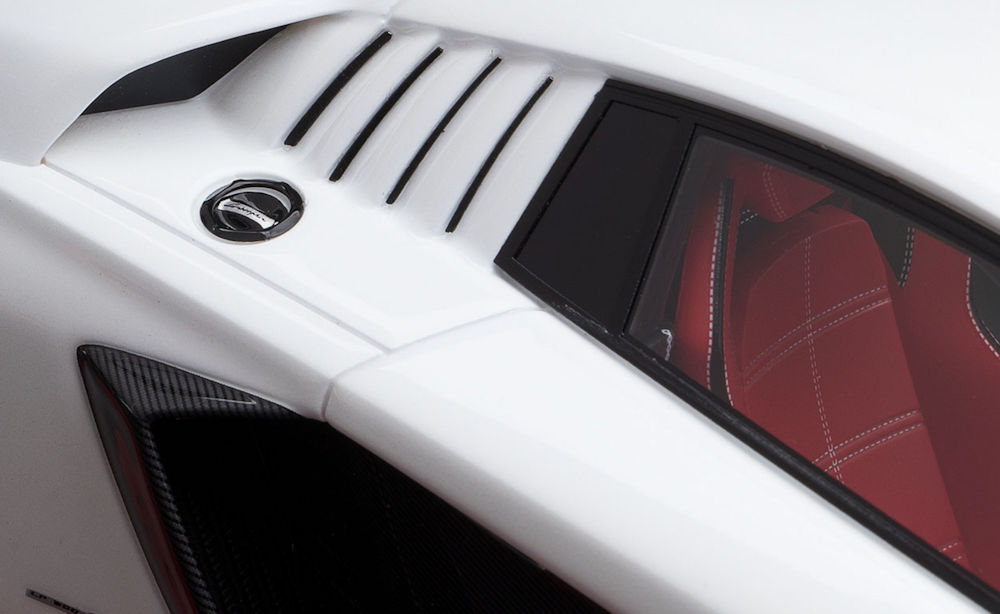 And then I notice the large air intake behind the side windows, beyond the ‘slats’ is just painted flat black, it’s not open like on the real car. That’s Bburago level, on a model ten times the price, that is not what I was expecting from MR, to be honest.

All in all, I’m still really happy with this 1:18 scale Lamborghini Countach LPI 800-4 by MR, she has an amazing shelve presence, and those Lamborghini scripts on the mirrors are too small for me to notice anyway without my glasses. Sitting on that luxurious-looking red plinth underneath the cover, the white just pops and the red interior matches the plinth, so while there are a few issues, I have no regrets adding this one to the collection. 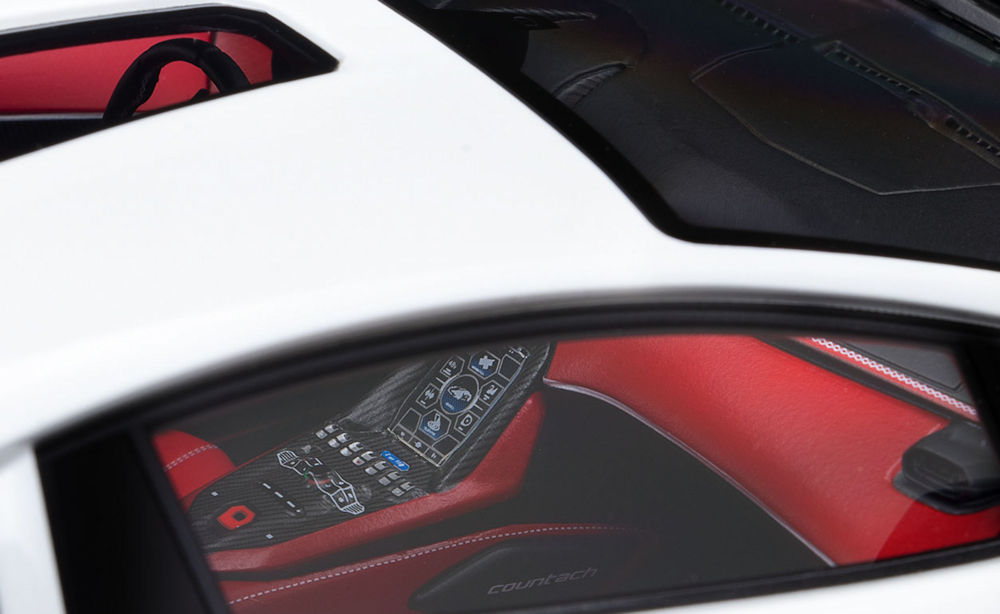 But I will also add the much cheaper Maisto/Bburago ones, and I even have the Top Speed version on order too, and when AUTOart does release this one, I will probably add it too.  It is still a very good-looking car, and in some more classic Countach colour combinations, she’s even better looking than this Bianco over Rosso, and I actually love a black or a white car with a red interior.