At almost triple the price of the base model, the new Mercedes-AMG GT Black Series is turning a few heads.  North of 700 ponies is fitted underneath the bonnet, and with available AMG Track Pack, which extends the fun with a titanium roll-cage, niffy carbon bucket seats, matching four-point seat belts and a fire extinguisher in check if the fun becomes too intense!

So how do the above fabulous details help us scale models collectors, well, Mercedes-AMG has commissioned a dealer edition of the same, which as most would know by now was executed by the team at Norev.  Two colours are available Magma Beam Orange and High-tech Silver, each providing you 360 full access with diecast metal exterior panels with plastic supporting bits.  Being dealer editions, each colour is limited to 2000 pieces.  Retail about $150 CND. 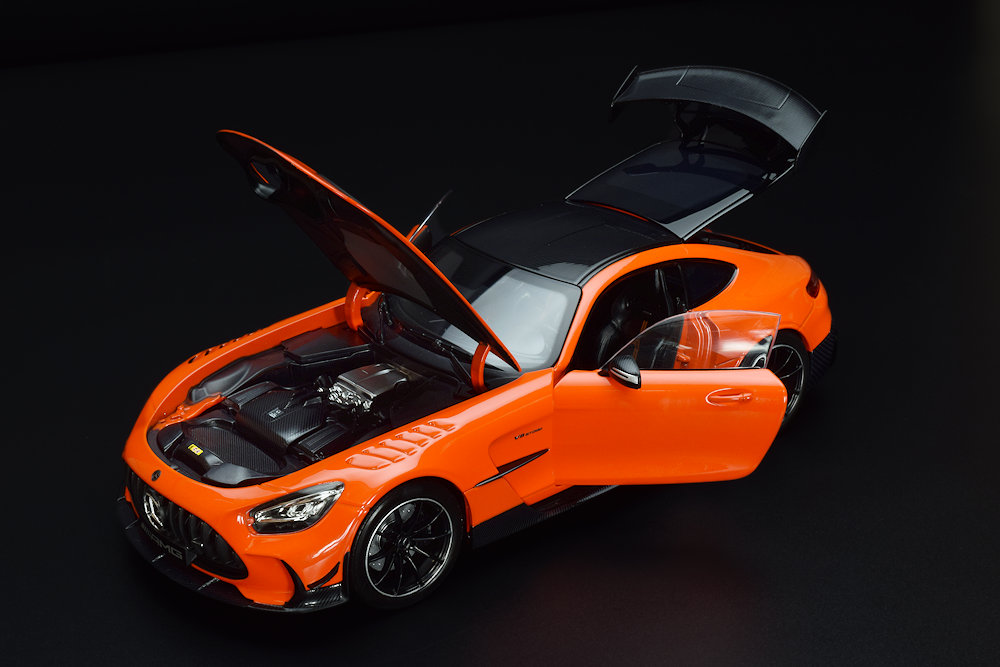 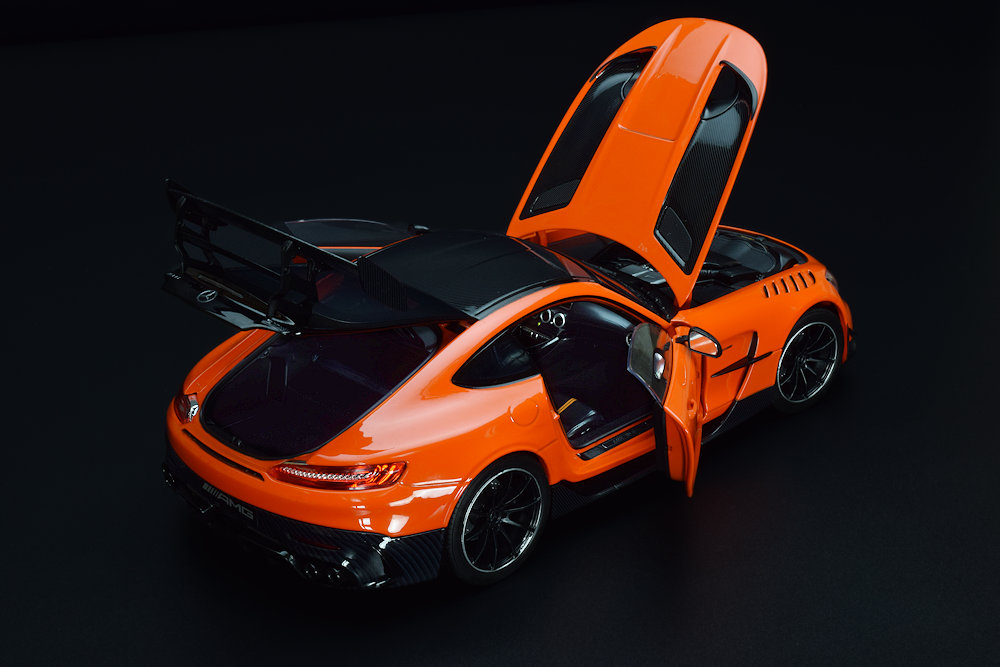 Our example is found in Magma Beam Orange, and let me tell you if impact is your game this is the right choice for you.  For those looking for a more subtle choice, as if you can call the Mercedes-AMG GT Black Series subtle, the High-tech Silver is definitely a notable option.

The Magma Beam Orange is just striking.  Mated with the carbon fibre bits the exterior side just pops!  The paint application on our example is very good and consistent throughout.  Also, carbon fibre elements are noted as well.  Do note the lower sections execution on the weave does take some liberties with size, we prefer the roof and rear spoiler in terms of overall accuracy. 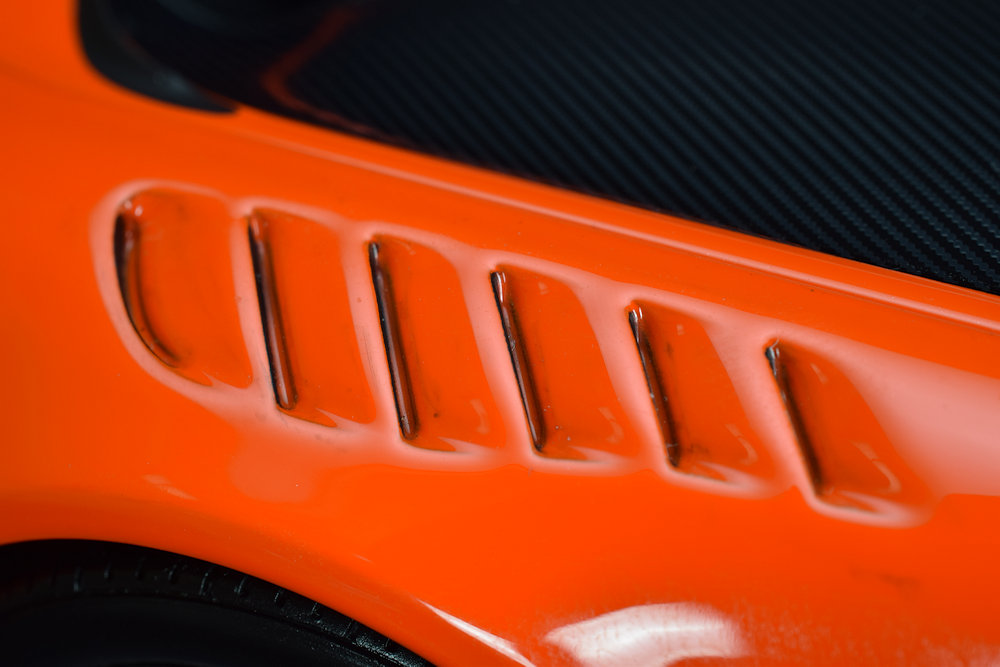 Louvres on the front section are deep but aren’t truly through the metal material.  Though Norev does paint the lower bits Black to create depth, the results here are very good.

Exterior mirrors are wrapped in carbon fibre too, though the integrated turn signals are executed with a separate piece mounted to the top.  In reality, the signals are moulded into the mirrors with the LED mounted underneath. 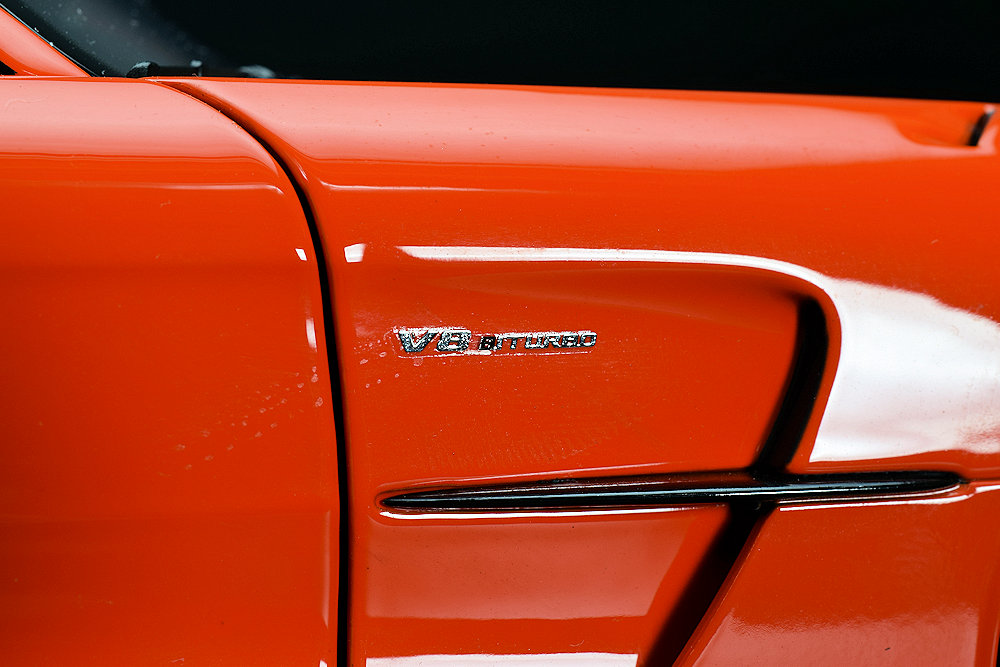 As for shutlines and panels gaps, the photos don’t lie, each area is impeccably executed, each operating in the open and close position without issue.  Well done for a budget-friendly effort!  As for the overall look, based on what we studied the model does present well.  What would have improved the overall appearance is the proper offset in the rear wheels – the rear set sticks out slightly too far, and the stance on the front side too high, a little lower would have helped.

The front of the Mercedes-AMG GT Black Series is one of the most aggressive-looking specimens to cross our path…  The combination of the massive grille and larger splitter (the 1:1 is manually adjustable too, the model is fixed in the close position).  As for the grille, it is a solid moulded plastic piece that does not reveal any of the motor detail or provide and mesh-like grilles.  Note, chrome work is clean throughout. 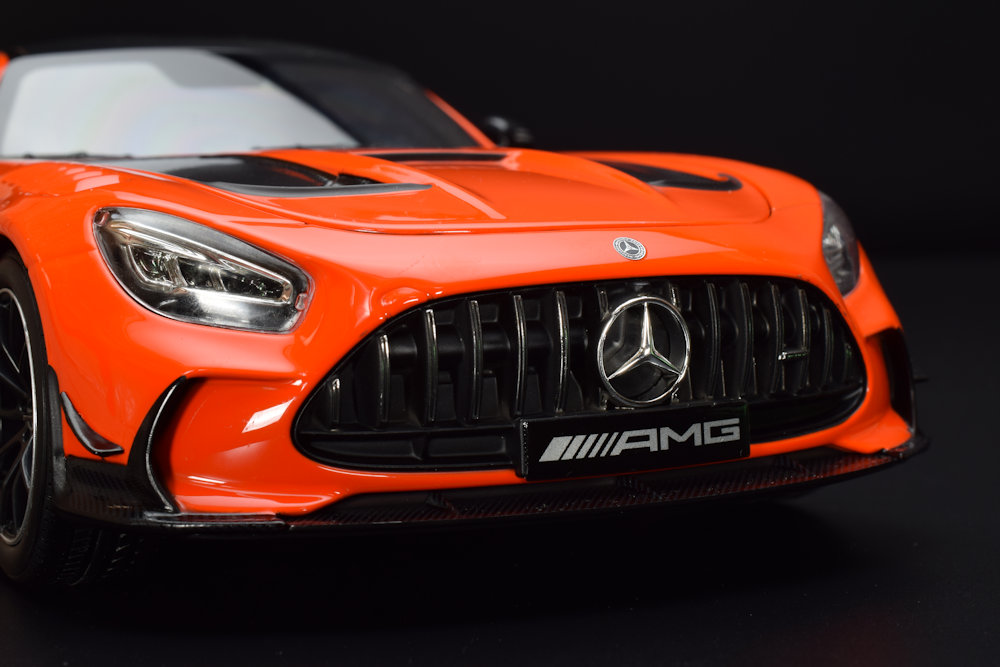 The lower splitter does provide the carbon fibre detail. And headlights are surprisingly detailed.  Moving to the hood, the massive intakes are covered in carbon fibre, well at least to the point of the curved section leading into the intake underneath – this section is left in Black.  The grilles at the top end are solid plastic pieces and the small centre notch is the same, capped with solid plastic.  Overall, the results are great but a little more effort would have paved a fantastic front end. 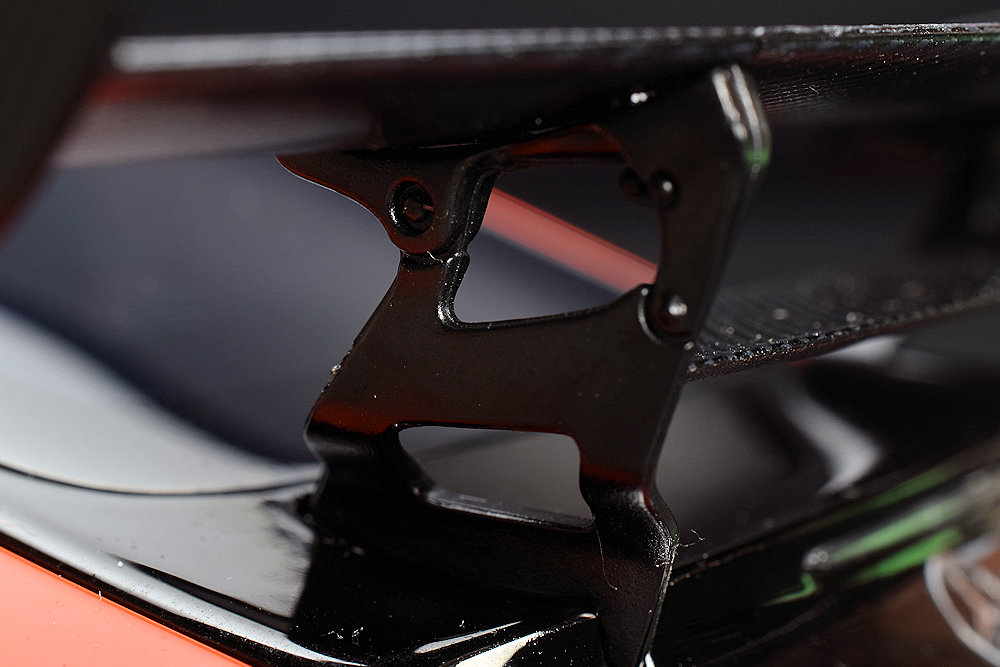 The rear wing does look somewhat cartoonish, but engineering wise it does perform and ups the downforce over the previous incarnation of the beast.  The wing itself does provide carbon fibre but here it’s crafted in moulded plastic.  Though bonus marks for defining the centre functional piece of the spoiler and much of the supporting cast on the two arms allow for manual adjustability.

All three badges on the lower hatch are present and photo-etched quality… Under close inspection, with a magnifying glass of course you will notice the “Black Series” script is missing.  Not going to fault Norev here, not sure how fragile a decal would be to action to scale.  Taillights mirror the original well and do provide a sound definition.  The lower bumper is covered with carbon fibre and the quad exhaust tips are accurately executed too. 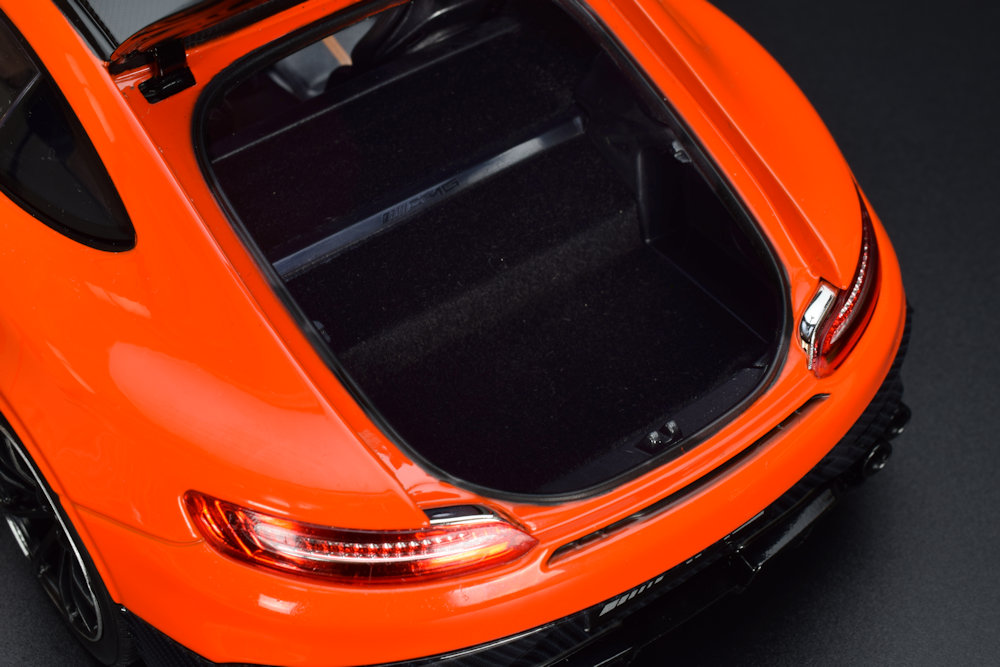 Lifting the rear hatch reveals the storage area which is covered in Black flocking throughout.  This example does NOT have the AMG Track Pack hence the missing roll-cage.  Also, just inside the lower opening, there should be two support stands, one on either side.  These are here to support the hatch due to the massive downforce the earlier noted rear spoiler produces.  Also, there are no strut supports on the hatch – commonly deleted from lower price point models. 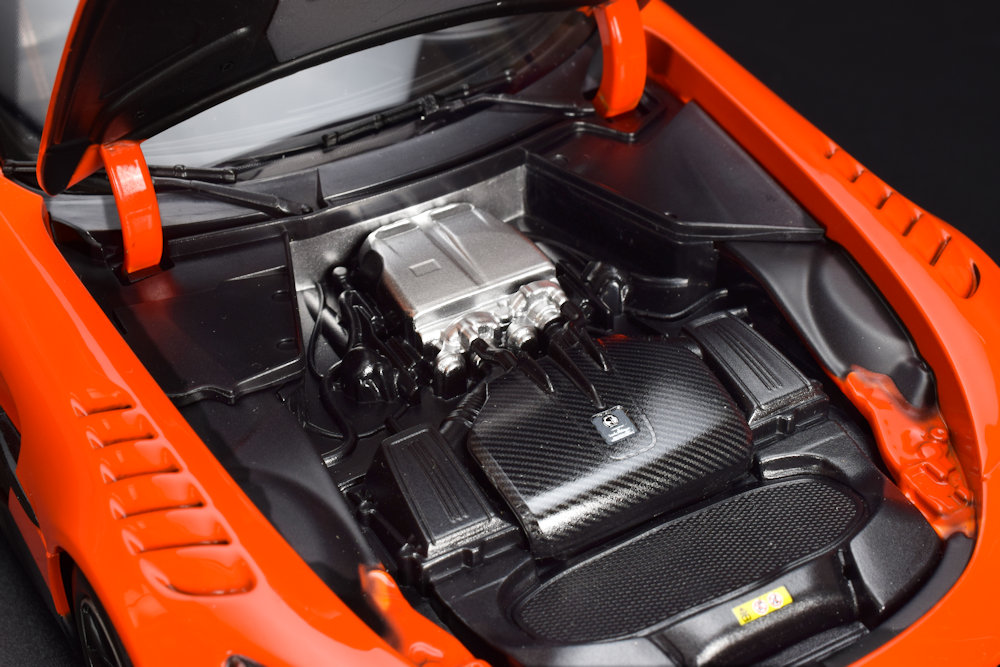 If we had to comment on the weakest link of the model, it would definitely be the motor.  At first glance, the budget-saving doglegs are used with no strut supports.  We’re okay with this.  The upper section of the motor compartment is executed with the flat plastic piece, this neither provides the depth and definition and the Silver painted surfaces (heat guards) are missing the pitting texture. Also, there is a large piece of the motor component left side totally missing.  On the positive side, the outer intakes are open to the motor end and there are some OEM badges in place.  We did say the motor was a little salty overall. 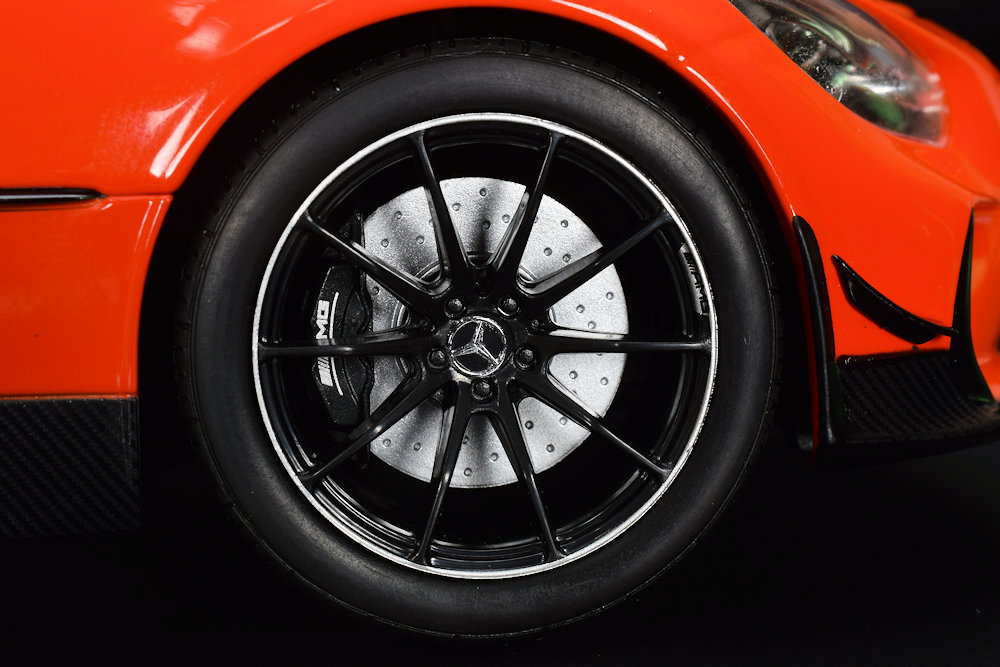 The wheels on the Mercedes-AMG GT Black Series are up to speed.  Norev did correctly action the 19” rollers in front and 20” in the rear.  Wheels overall look the part and provide a more than satisfactory effort – painted outer wheel lip in Silver and AMG badge is here, though tires lack any branding.  Multi-spoke design mirrors the original well, though not perfect and the supporting cast of rotors and calipers are decent too and feature AMG logos.  As we hinted at earlier, the rear offset and stance adjustment would have helped with the overall look.  As for tires, in our opinion the sidewall is fine, we believe with corrected offset the look would be improved dramatically.

Inside the interior does provide most of the basics.  Interior flocking is here along with seatbelts.  We like the definition for all the interior elements for the most part, as Norev helps define each area well – they even extend the embossed logo to the centre armrest.  Sorry, no photo to share. 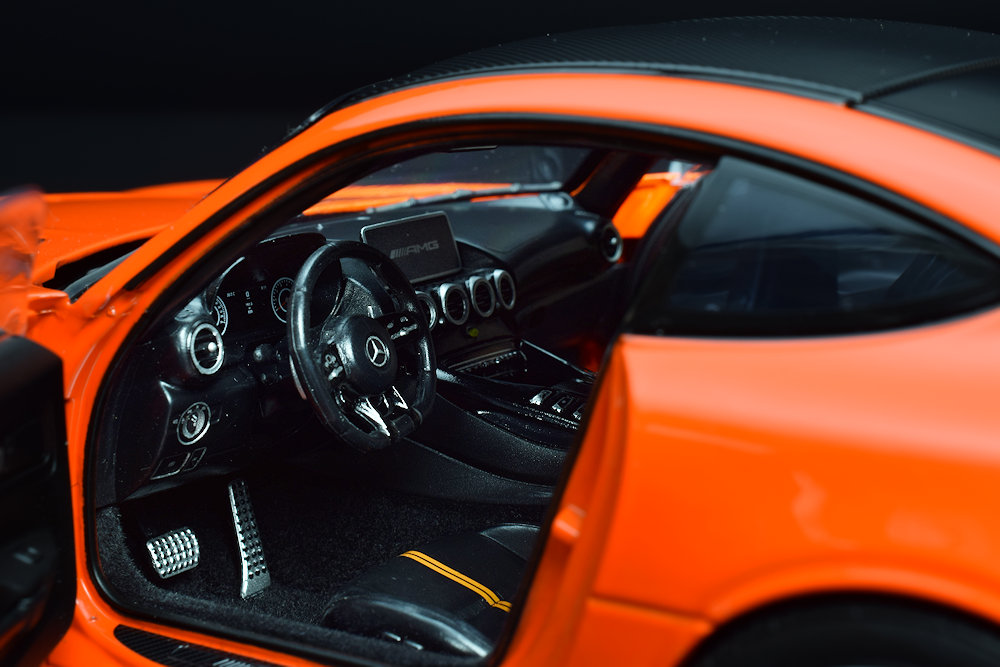 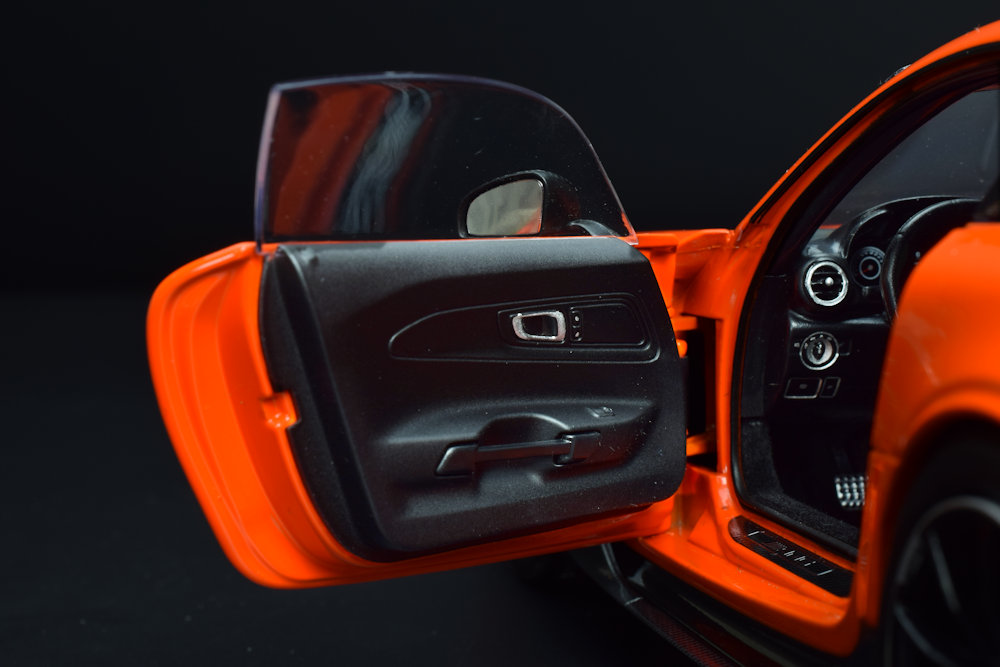 On the flip side, there is no Orange pin-stripping or accents bits in the door cards, one exception is the seats.  As for the seat, not sure if they are entirely accurate in design.  Could be a dealer option.  Anyone?  Overall, the attention to detail isn’t perfect and somewhat lacking in the authenticity department, especially when you are trying to define the difference between the Mercedes-AMG GT Black Series edition over the standard model.

If you have been a regular here at DiecastSociety.com you know our feelings for Norev in general.  They are GREAT for this hobby.  They execute a wealth of models and keep pricing reasonable, where many still can dip their toes into the collecting without a need for a second mortgage.  The dealer edition Mercedes-AMG GT Black Series is no exception!

The results aren’t perfect and are reflective of the price.  And speaking of price, dealer markup is definitely playing a part here.  If Norev chooses to offer the same model via the retail channel we’re sure the cost will be considerably lower.  As for the comparison with GT Spirit’s effort, we haven’t seen one on the flesh yet, surely there are pros and cons on both sides.  The major deciding factor for us is full access versus static, and for us full access is paramount.  In conclusion, if your collection touches the supercars or Mercedes-Benz in general you should give this one-second look.  Enjoy the pics!