Happy Easter everyone! Easter bunny has left a giant egg, something of a Kinder Surprise:  The surprise element certainly is that it´s the first ever truck review on DiecastSociety.com as far as I know. And like a Kinder Egg, it´s actually two items in one, though none of it is edible and neither physically fits into the other. Yet, although produced and bought separately, the Mercedes Actros head tractor and the custom-built trailer form a perfect union of 93cm in length. 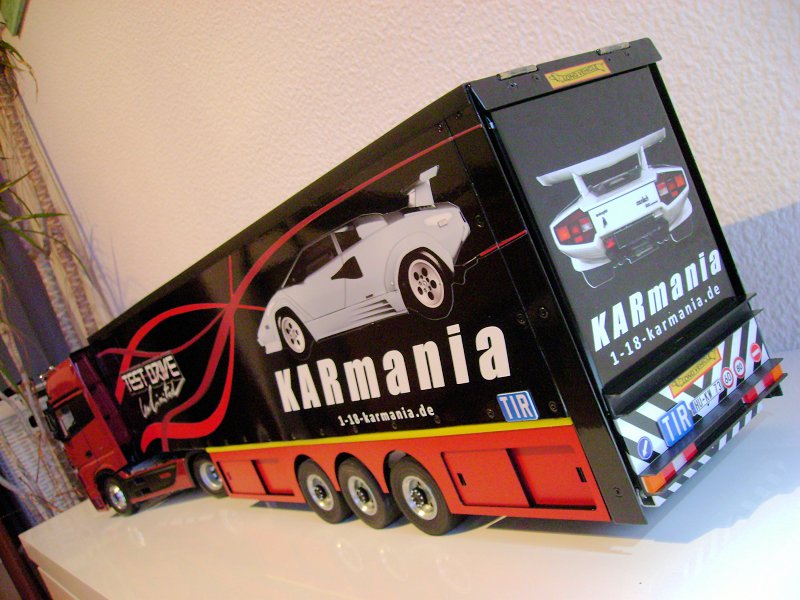 To start with the tractor, the model is made by NZG and represents the current generation of the Actros Gigaspace 1851. The model is available in this two-tone red and black colour or in white as dealership editions, or in blue, silver or in black with a partial Mercedes star on its side. The paint job on this red model is a finely flaked metallic dark red with an excellently smooth paint-job. The grille is metal with tiny holes in it. 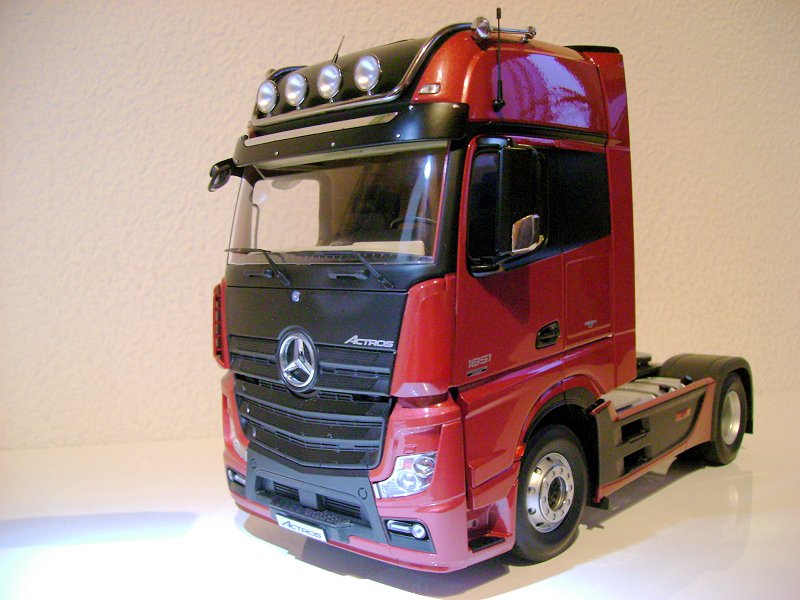 The headlights are not the most detailed and intricate pieces, but quite okay. The same goes for the tail lights of the tractor. They are red transparent plastic with the indicator section and the reversing lights section simply printed on in non-transparent colour. The small position and indicator lights on the wheel arches, in the roof and the red little squares in the side skirts between the wheel arches are transparent white or yellow plastic. The fog lights, both the tiny ones in the front bumper and the additional ones on the chrome bar above the windscreen are much better. So are the details like the horns, the antennas and all the numerous mirrors. 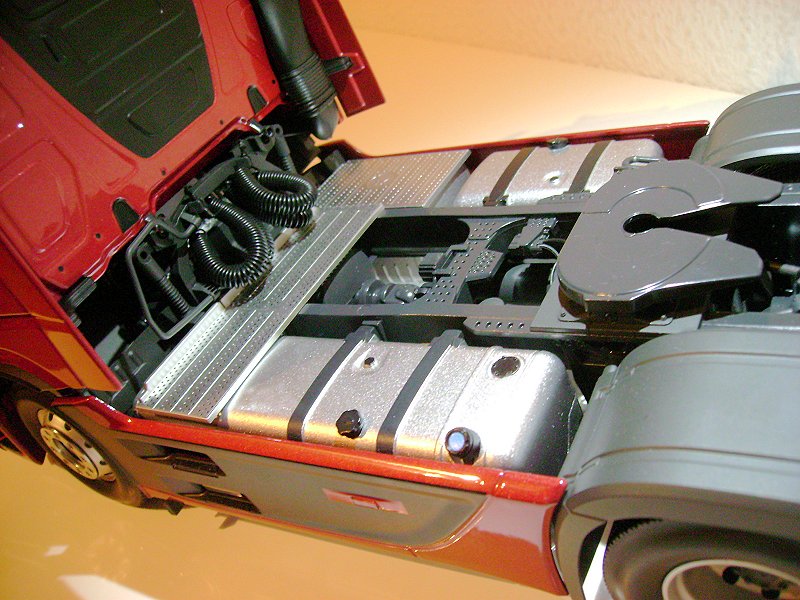 The wheels are really nice, with well-detailed rims of a workhorse that don´t offer a glance at brake-discs or calipers. We are used to the fact that tires do not have branding on their sides, but what these here do very nicely is bulge sideways as if under the 8-ton-weight of this machine. The heavy 4kg of the diecast model represents that weight very nicely and you have to take it with both hands and make sure it doesn’t tip over towards the out of balance cabin.

The real piece of cake here, though, is the running gear, the diesel and adblue tanks, distinguishable by their (non-removable) filler caps, the tread plates behind the cabin, the detachable cables on the back of the cabin, the detachable yellow chocks at the rear. And for everyone, who laments the lack of engine detail in most recent car models, you´ll really enjoy popping the hood on this one. Only that popping the front service lid with the star does reveal little, even though filler caps are visible.  Yet it has to be done before you can tilt the cabin forward to find the nicely detailed model of Mercedes’ 12.8-litre 6-cylinder-common rail-diesel engine that produces 510 horsepower and 2500 Newton metres of torque at only 1100 rpm thanks to automatic  12 gears.  You´ll also have to tilt the cabin in order to install the battery before you can put the Gigaspace cabin back into position. 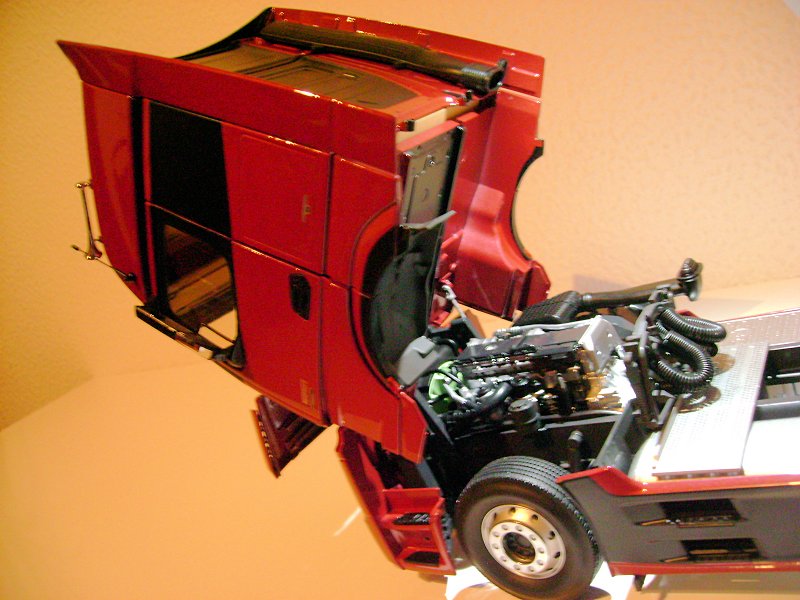 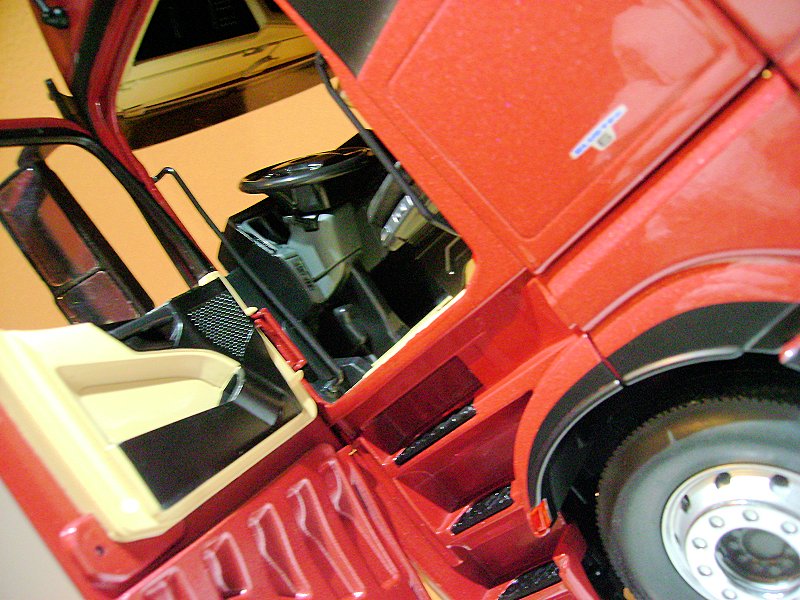 Gigaspace is the name for the biggest and most spacious cabin option for long-distance haulage. It will allow occupants to stand upright and offers lots of amenities. And for another feature, you´ll have to open the passenger-side door, best done by the bottom end of the stairs, to reach a small black three-position-slide-switch in the cream passenger foot-well. That will turn on the blue LED interior and front Mercedes-star illumination. Nice touch! Inside the two-tone cream and black cabin detailing is decent. You can see handrails for climbing the ladder, cup holders, push buttons, etc. but no further colouring on the buttons, and no seat belts either. You can move the armrests on the seats, though. Ignore the fire-extinguisher, that´s my addition.

I had never thought, I would ever want a truck and found prices of Eligor´s rendition of the previous Actros ridiculous, but with where prices for ordinary-sized decent-quality model-cars have gone, this giant diecast-tractor is excellent value for money. 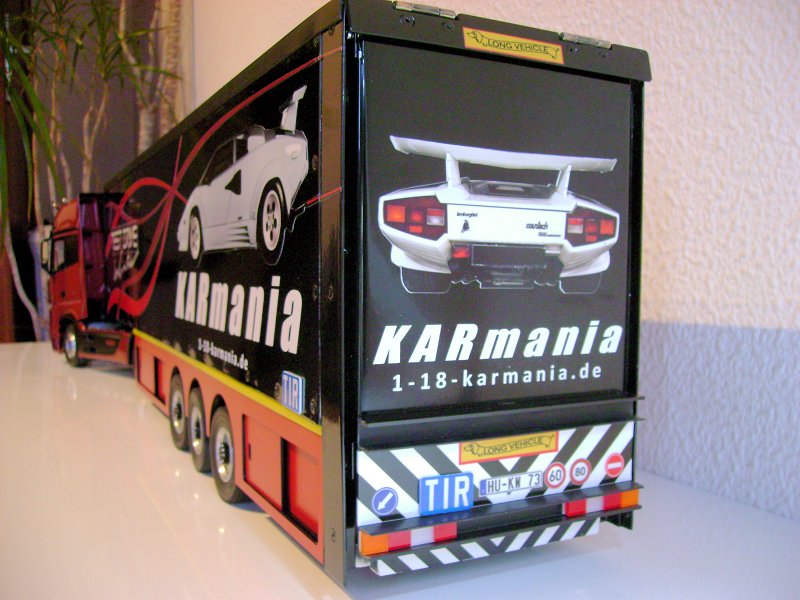 Of course, I always considered a head tractor only as somewhat incomplete. And that brings us to the trailer. The same manufacturer (NZG) has announced and shown a trailer at this year´s Nuremberg Toy Fair, but that´s not available yet. And the other thing is, that Bob the Builder collectors who are into excavators, bulldozers, trucks and other work machinery usually don´t collect  1/18 scale. For us, 1:18 addicts trucks become more attractive if the haulage job includes cars, if there only was a car transporter trailer for the head tractor. That´s probably what fellow 1:18 collector Mihail Neagu from Romania must have thought, maybe inspired by CMC´s vintage race transporters and started making trailers. The closed 3-car-transporter with tail lift/lift gate that I have treated myself to is a mid-priced variant. The beauty of it is that Mike will build it to your own specifications. You can choose from a range of trailers (not only car transporters), American style or European style and above all in your own livery. 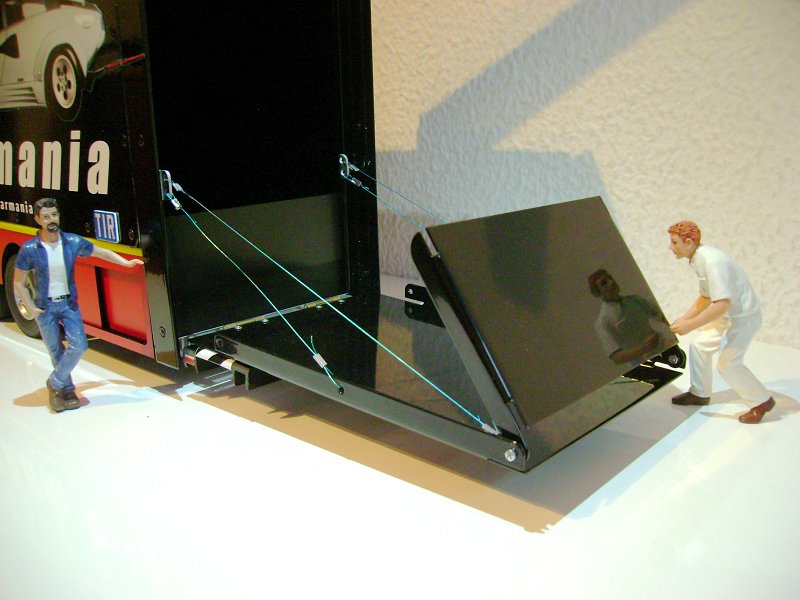 With my trailer, he has patiently discussed the design with me. The trailer is Mike´s standard closed 3-car-transporter. Chassis and box are made from aluminum and sheet metal, bolted and glued together with plastic frames. I had this box powder-coated in black. The livery on it is a plotter-printed plastic sticker. Mike has used my website-logo and the Test Drive Unlimited logo. The streamlined wavy lines were a discussion point. I particularly wanted the line starting from the tractor´s rear wheel to be the same red as the tractor´s dark red and appear to be continuing the red upward curve on the tractor´s side skirt into the trailer. Mike has managed to do that perfectly well. 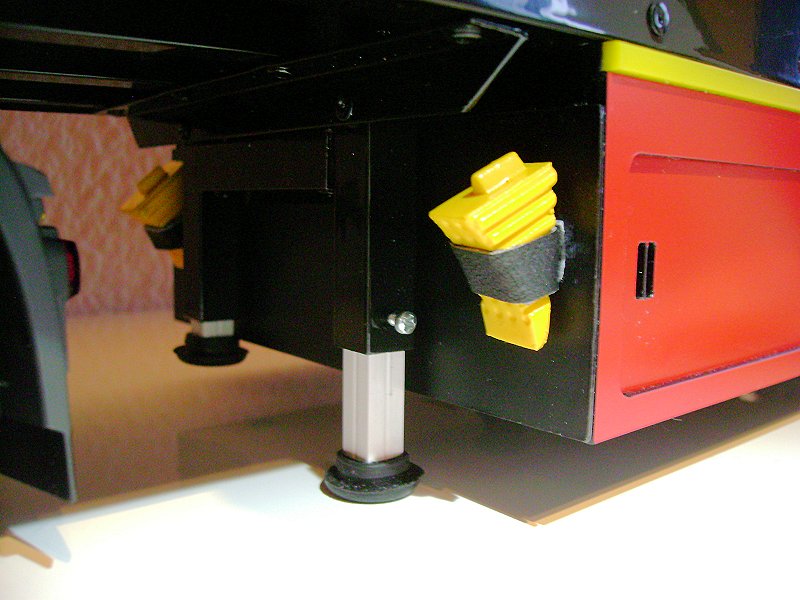 The lower part of the trailer is made from plastic to my choice of colour, too, and has compartments with smoothly opening sliding doors for accessories. In the rearward compartments on both sides, you´ll find spare tires. Further chocks are attached to the side of the compartments towards the front underneath the trailer´s box with leather straps. This European style trailer rolls on six wheels on three-axle with spring-suspension. Each wheel has metal rims and the “MNtires” branding on the rubber tires reveals that Mike makes the tires himself too (or has them made especially for him). 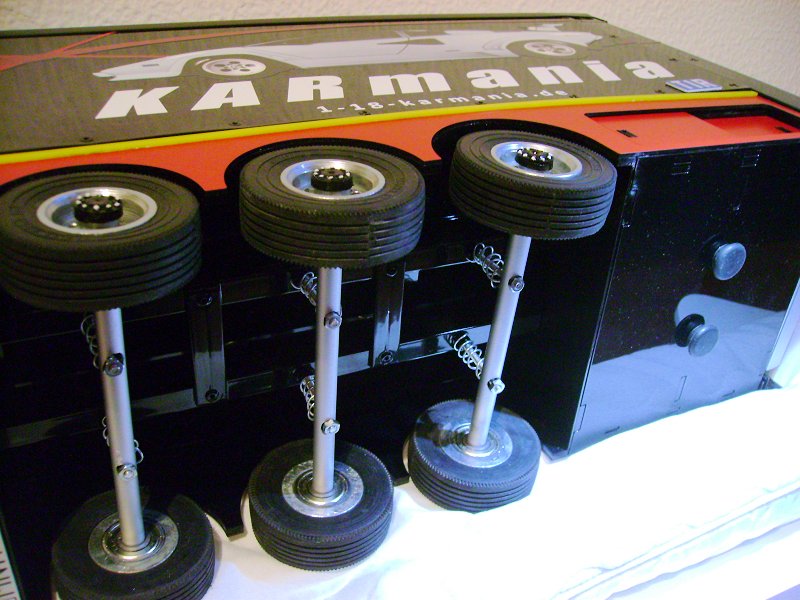 Towards the front, the alone screw is sticking out to be joined to the tractor and underneath the trailer box, two extendable props are installed to support the trailer while detached from the tractor. They can be arrested in the required position with a screw. The lift gate on the rear has stickers of a warning pattern (in my case black/white) with a German customized registration, speed limits and no passing signs. The tail lights are segments of coloured clear plastic assembled on a silver reflector.

The tail lift opens simply and solidly by lifting the top flap and then folds down on hinges fixed to a sliding metal frame that is inserted into vertical rails along the rear opening. The lift gate is stopped in the horizontal position by wires and unfolds another segment to make it longer. To secure the lift gate in its vertical position from moving there are pins. There are three vertical positions for the lift: the open/close tail gate position, the downward ground level position and the upward position to roll a vehicle from the lift into the trailer or vice versa. The operation is not smooth, though, and you need to force it. As in contrast to the head tractor the trailer is very light despite of the solid material, the weight of a heavier diecast model will have enough leverage to make the trailer rear back (the 918 doesn’t, the CLS will) if not counterweighed down at the front. So I wouldn’t recommend really lifting or lowering it with one of your precious models on it. Neither do I recommend rolling something with delicate wing mirrors such as a Pagani onto the lift or into the trailer. For better access to the interior, there are other versions with gullwing side panels, removable tops or simply open car transporters. 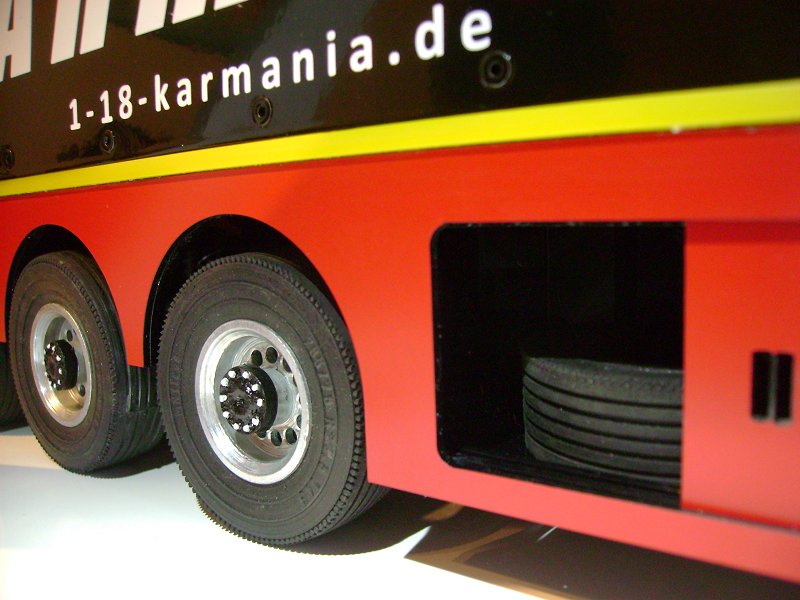 Of course Mike’s trailers are not silky-smooth mass-manufactured models, but they are convincing solid hand-built and custom-made to your specifications with a lot of attention to you as the customer and to the detail that goes into each model to make you a very happy customer with a one-off trailer that is pretty much true to scale – it only slightly breaches German regulations for maximum vehicle height. Thank you very much, Mike! I love my trailer!

You can find MN Trailers on Facebook or on eBay.