Five years ago trucks were a rarity in 1:18, but now there is a flood of them making up their own theme in 1:18 scale. Road Kings alone has been making American trucks, starting with the iconic Peterbilt 359 and its immediate competitor, the Kenworth W900 A (reviewed here in its “Smokey & the Bandit” skin). After the success, Road Kings now do American cab-overs that were invented to beat regulations for maximum vehicle length and thus allow hauling longer trailers which became obsolete when these regulations ended. Like the real truck, Road Kings´ Kenworth K100 Aerodyne is most popular in its red/white “BJ & the bear” TV series paint finish, so Road Kings had a very limited edition of 40 with the correct scripts on the cab (after-market stickers for the non-limited edition K100 have become available to achieve the same) and MN Trailers make a fitting “BJ & the bear” trailer. 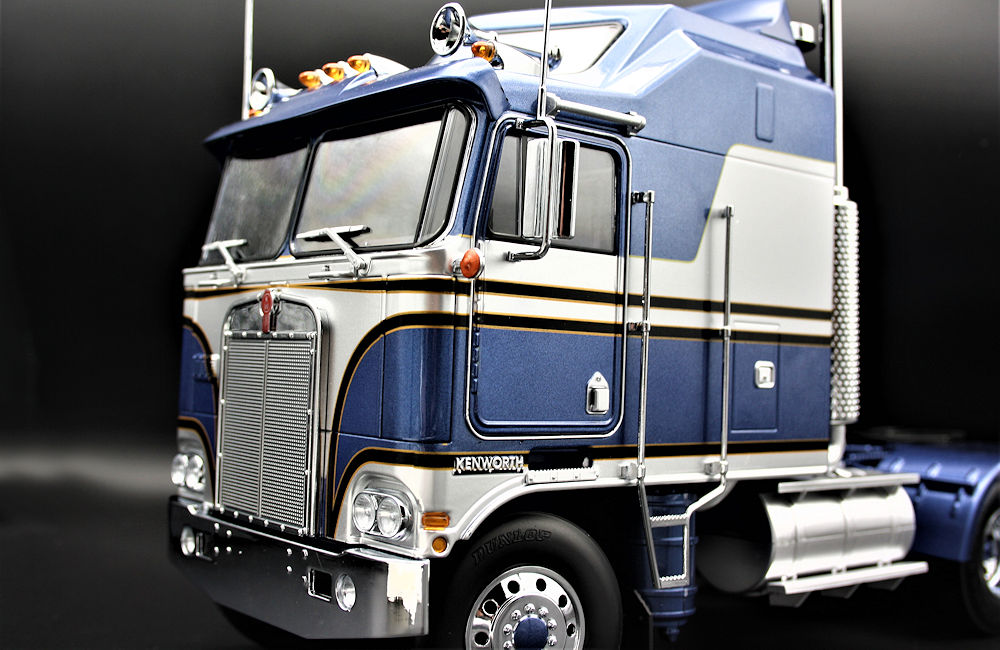 I have selected the same “Salem” scheme, but in “medium concord blue, metallic silver, black and gold” which seems pretty much based on Paul Cox´s splendid renovation job on his K100 Aerodyne and IMHO lends the truck more lustre than the red/white scheme. The metallic blue has a fine sparkle and may appear lighter or darker depending on lighting, the silver is rather solid and appears almost white. The fine gold pin-stripe separating the black, gold and blue is tampon-print-on and tends to slightly bleed into neighbouring colours in some places. On the front right corner of the cab, just over the headlights, there is a slight misalignment of the stripes, but anywhere else, across air vents, and doors panel gaps it is aligned perfectly. 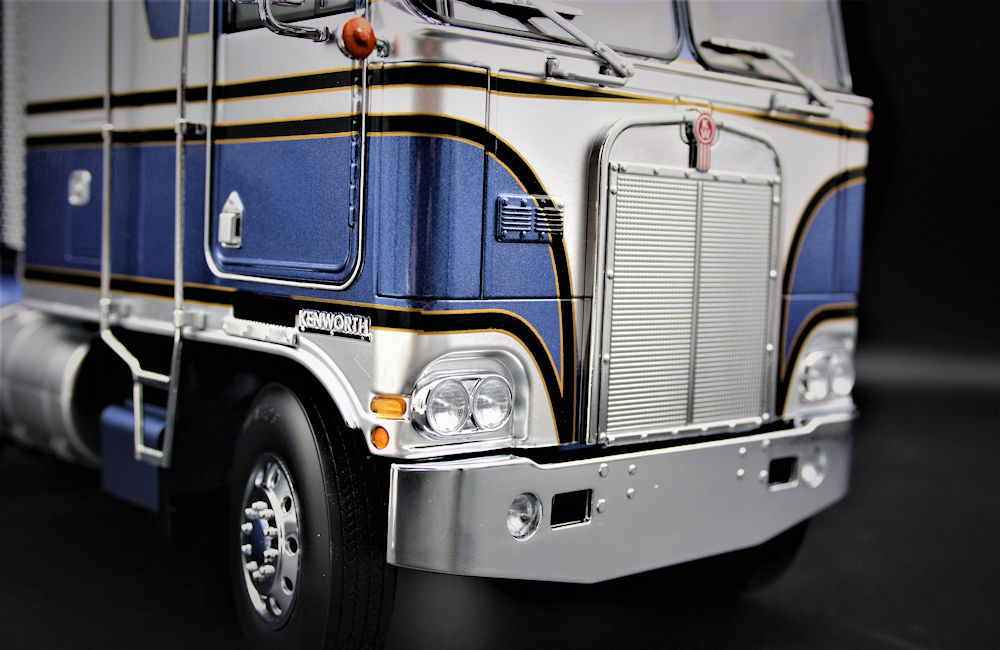 The double round headlights of the K100A are well done, with reflectors and light bulbs visible through patterned lenses, framed in chrome housing, just like the round fog lights in the chrome bumper that is plastic since after the Peterbilt, where it was solid metal. Indicator lenses next to the headlamps are transparent amber plastic, just as the adorable amber roof lights´ lenses, show light bulbs moulded into the chrome housing on which the lenses are mounted. With the indicator extensions below the A-pillar here Road Kings have reverted to the rather dull amber paint they had on the Peterbilt, while the W900 has transparent lenses extending from the front wheel arches. Rear reds are transparent but rather flat. The giant chrome grille is not perforated, just like the exhaust mufflers. 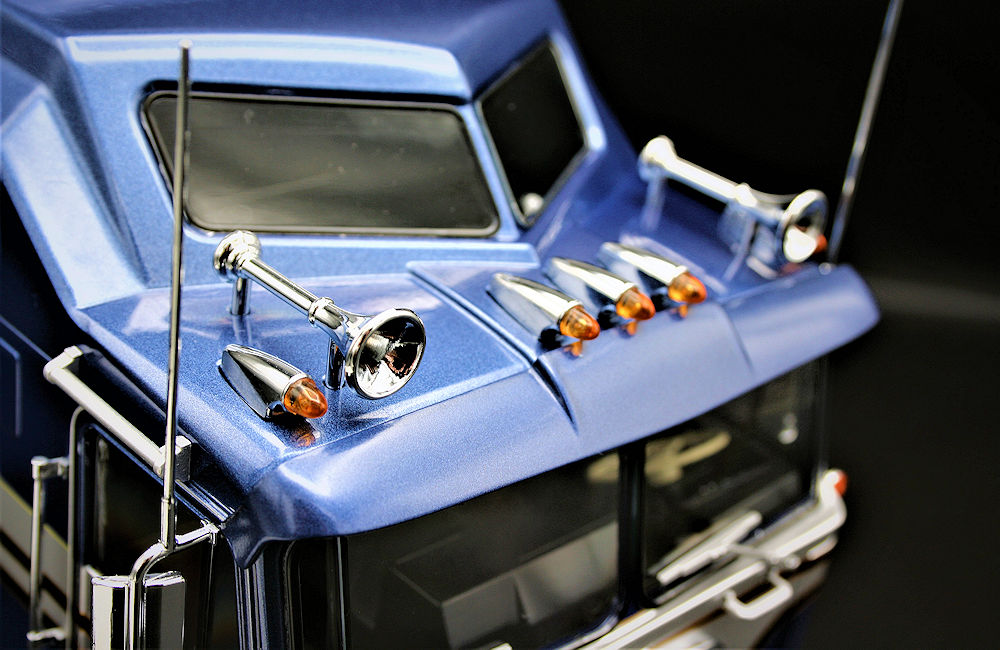 A more admirable effort has gone into details like the windshield wipers, handles, steps and Kenworth scripts. The doors and windows with their chrome frames and black rubber seals add a lot of realism to the model. The tires have a nice tread pattern and branding, but the horizontal lines where the fuel tanks’ halves are joined take some of the realism. Like on each truck all the cables on the rear of the cabin are a nice extra for a truck on this scale. 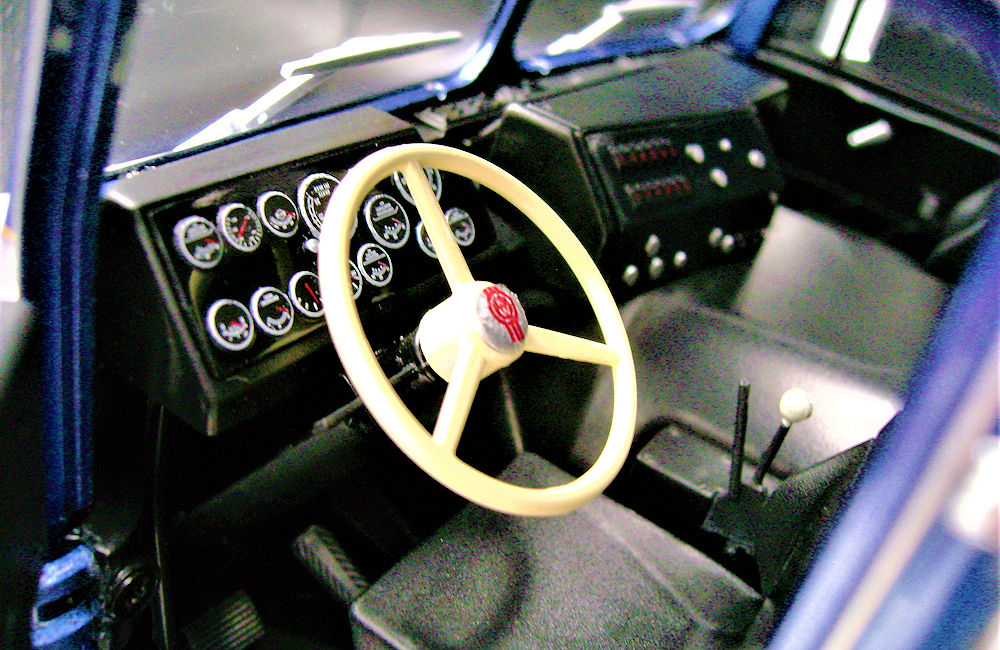 The interior is kept rather simple for what these trucks can be inside with their wood veneers and quilted liners. The steering wheel, pedals, elevated gauges and coloured buttons and switches are quite nice and Road Kings have cared to add a very simple bunk bed behind the upper windows. 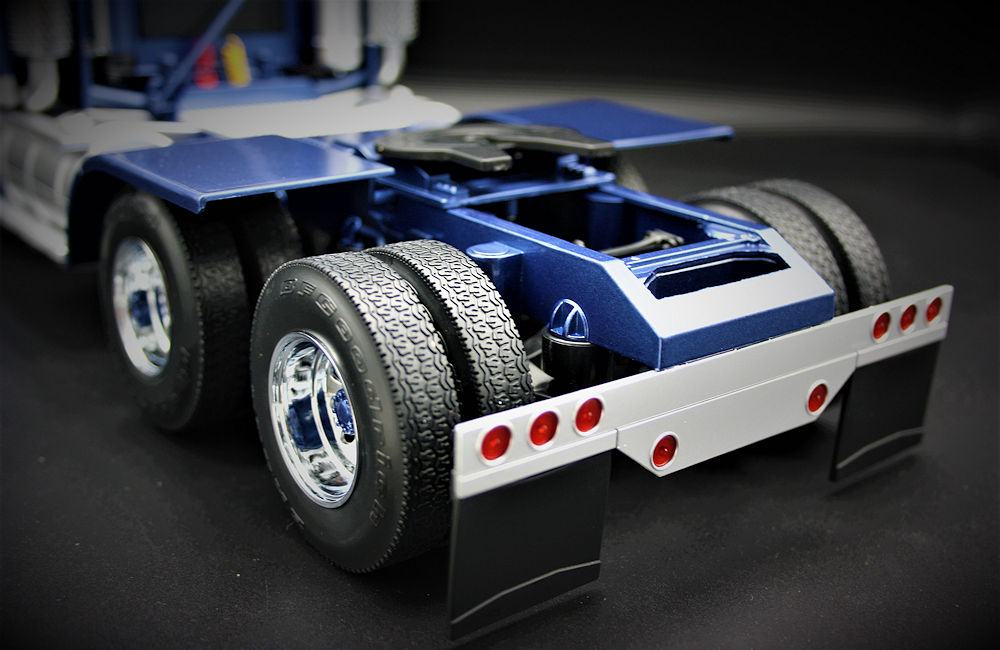 I missed an offer for 145 Euros, but was happy to buy for 170. Another cab-over, the Peterbilt Pacemaker, is released, too, but does not hold as much charm IMO. However, to truck fans there are increasingly more offers available and worth to be considered at reasonable prices. This is why this really would have deserved to be in our Model of the Year polls. For more than 250 Euros I would want to see NZG quality, for over 650 you can get an NZG truck and trailer, e.g. the spectacular car carrier. But a limited edition Road Kings Kenworth K100 would not be worth that kind of money to me. What about you? Do you feel tempted to add a truck on this scale to your collection?