Today we´re “eastbound and down, loaded up and trucking” for models that celebrate the second most successful movie after Star Wars in 1977, a quintessentially 1970s road movie, many of us loved as a kid back in the day, even before understanding some of the saltier jokes. “Smokey & The Bandit” had all the ingredients of light-headed fun revolving around motoring.

One of the first items launched naturally was Greenlight`s Pontiac Firebird Trans Am, not only this 1977 appearing in the first (and best) movie, but also the one from the sequels. Now, Greenlight doesn´t do the most refined models and this here is no exception with neither steerable front wheels, an opening hood nor boot, only opening doors, but the licensed product does have the correct BAN ONE Georgia plates, surprisingly carpeting inside and some wonderful golden accent striping and Firebird ornaments and “Trans Am” scripts. So “does this thing go?” … “Oh yeah!” 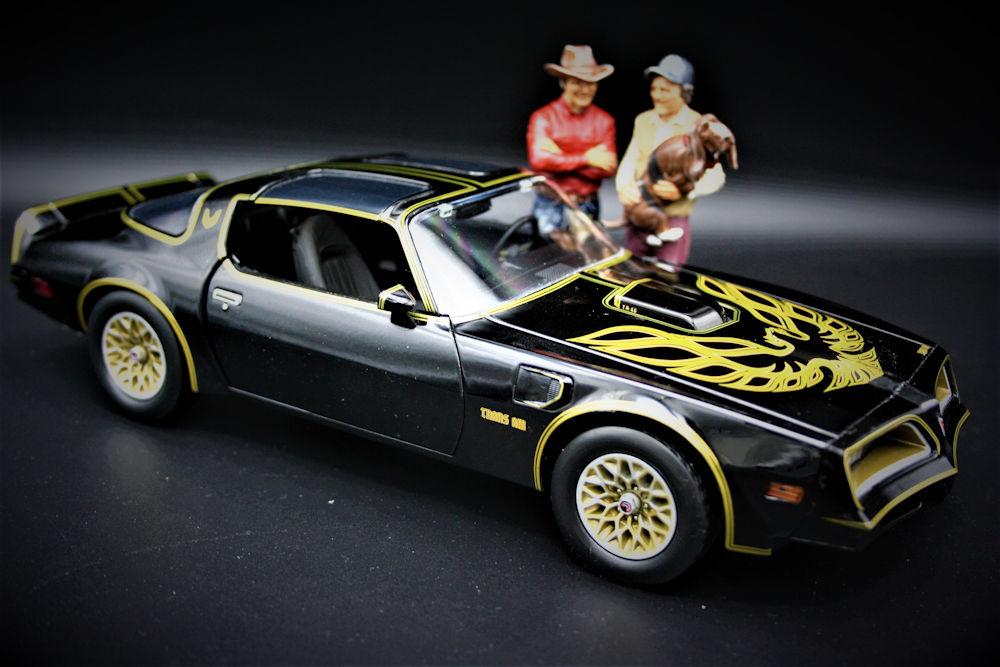 Ironically for a trucking movie, this and Greenlight´s two Plymouth Fury cop cars, a Mississippi Highway Patrol and an Arkansas State Police, to join the chase plus a Ford Bronco to help cheer the Bandit on could have been all and no one would have taken the franchise any further if Mike Neagu from Romania, when setting up his business MN Trailers to make trailers for 1:18 trucks, hadn´t made the “Smokey & The Bandit” trailer, even though not even any American tractor existed in scale to complete the big rig by then. What we have here is the revised version, with two axles on suspensions with 4x real rubber double tires plus spares underneath, lowering legs for the uncoupled trailer, Hobbs mud flaps, non-transparent rear lights, opening and locking rear doors, a wooden boards floor decal (that he would happily make in real wood if you wanted) and a removable roof to access any cargo. As in the movie “there is beer in Texarkana”, I made some Coors boxes and filled them with bottles for the bootlegging run that the movie revolves around, hence the refrigerating unit upfront of the trailer. 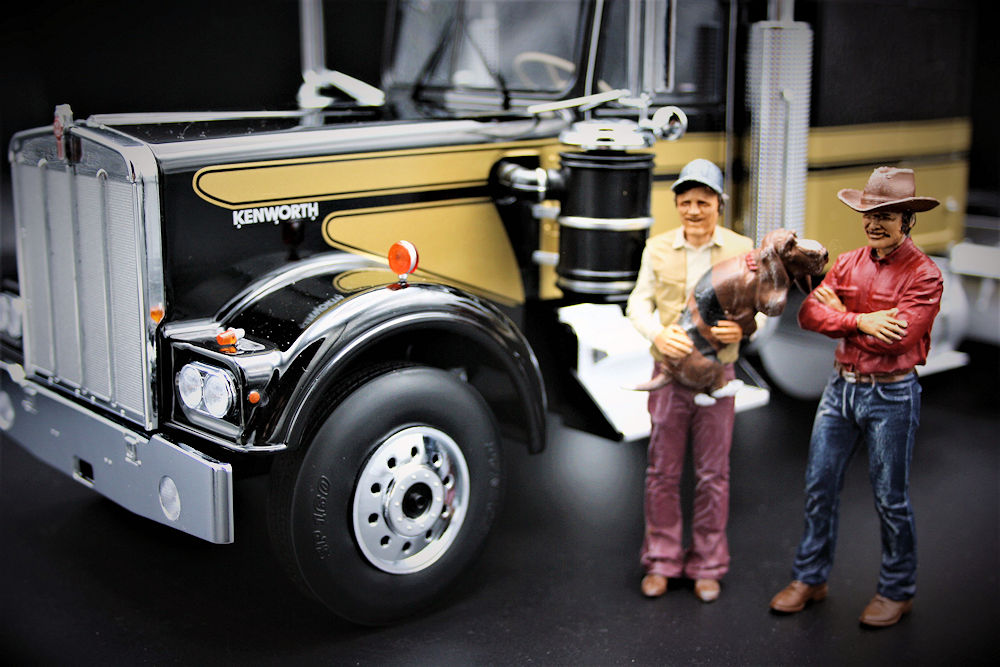 It all just started to make the sense when Road Kings jumped on the bandwagon and made the Peterbilt. They probably knew Mike´s customers would all be buying it, so they kept the Kenworth W900 for later, which is … NOW. The first colour is, without being licensed by the movie makers, clearly aimed to resemble Snowman´s tractor in black with gold ornamental stripes, even though the sleeper on the model is too large to match the movie´s machine. Like with the Pete, the Kenworth is a lot of trucks for a mere 160 Euros. Matching Greenlights Trans Am in quality, you get a nice exterior. The roof lights are now transparent, no longer painted on as on the Pete. While the Peterbilt had a diecast metal front chrome bumper, the Kenworth´s is only plastic. Maybe this is why the Kenworth, despite being slightly longer, is noticeably much lighter than the Pete. A novelty over the Peterbilt is the tire brandings, Dunlops for the steerable front wheels, and 4×2 BF Goodrich rubbers on the two rear axles.

For the Peterbilt, the mirrors came detached for you to install, and with these being pre-installed on the Kenworth you are wondering, what the two chromed tubes forming a right angle are, as no instructions are included in the box and product pics usually don´t show them installed. I reached out to the manufacturer and got the answer: antennas to be installed on the mirror and above the doors. Makes sense for a movie that made CB radio chatter more popular, “Bandit”, “Snowman” and “Smokey” being callsigns and CB-speak.

As on the Peterbilt, the bullnose is not exposing the engine, and this time there is a not-so-nice visible split of the two halves that shape the barrel-shaped fuel tanks, but the doors at least open, although you should not expect too much from the cabin´s interior. At least, it is improved over the Peterbilt whose dashboard is a brown sticker with gauges printed on two-dimensionally and no shift stick at all. By contrast, the Kenworth has three-dimensional coloured gauges and buttons as part of the dashboard mould and a shifter. 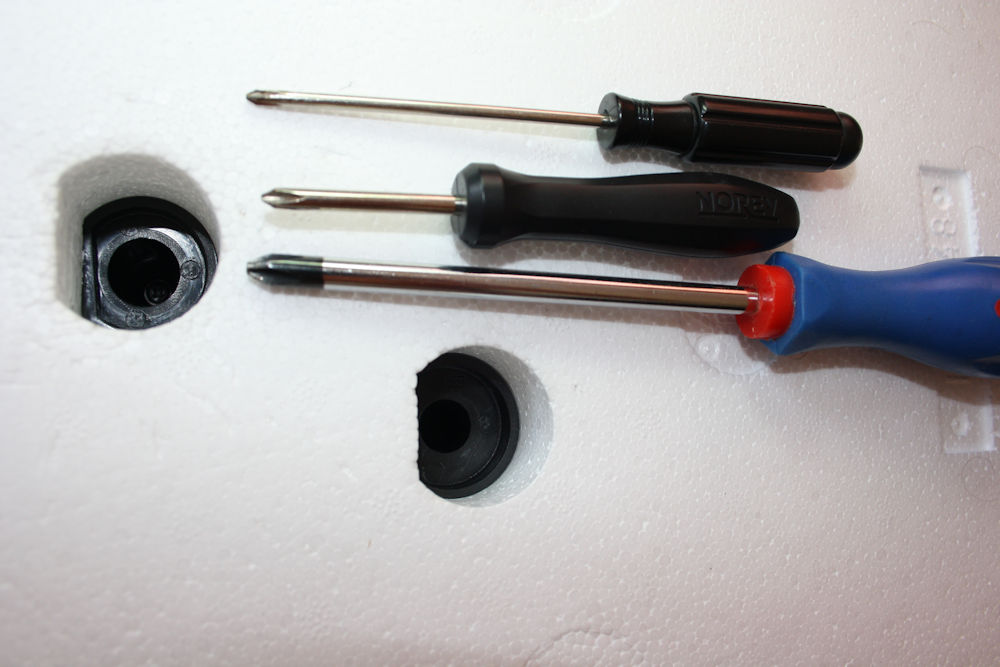 I usually don’t mention the packaging, but with Road Kings, I experience the least user-friendly mounting into the Styrofoam shell ever. Not that having screws through the styrofoam and plastic funnel reinforcements into a models metal chassis is an unusual or bad idea, but two have the screwheads 10cm down from the surface in a dark hole is a channel illustrated best by my photo of the screwdriver I had to use to reach and move the screw next to the drivers usually used and often supplied with a model. And that with a huge and heavy model you want to unscrew in no other position than from below with delicate mirrors pre-installed. Phew! 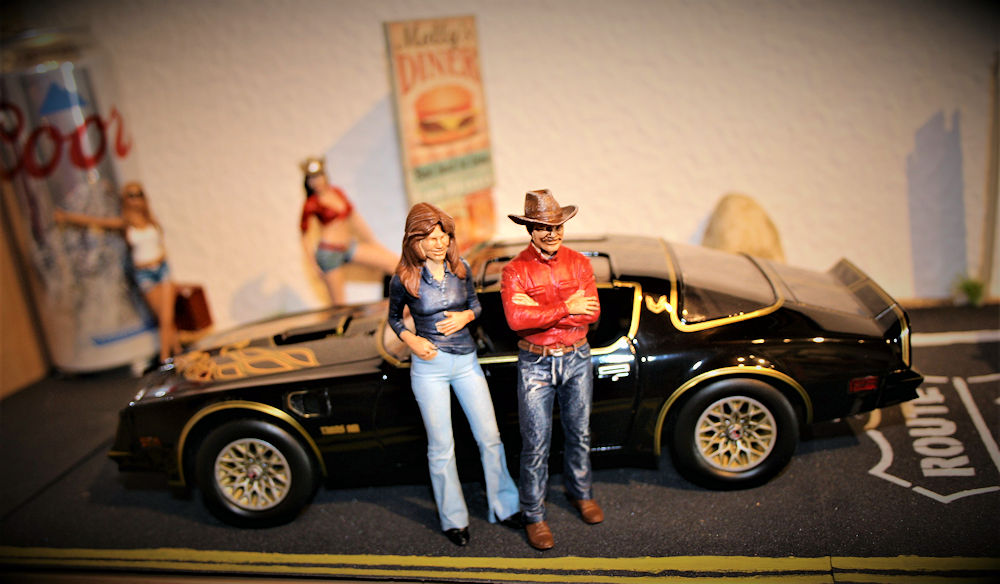 That despite the missing reference to the movie this colour option is not a coincidence is made clear by the fact that Road Kings, being a sub-brand of KK´s models (with their Miami Vice Ferrari), offer two figurines as add-ons, priced exactly the same as the Miami Vice heroes. However, Bandit and Snowman both look a little stuck up and stiff, Bandit having his arms straight by his side and his fingers at a strange 90 degrees angle as if he were carrying suitcases, Cledus seated with his hands’ palms down on his thighs. Bandit seems to be modelled on a 70´s movie merchandise action figure, I remember. Honestly, (sitting) Crockett and Tubbs had a cooler, more credible pose 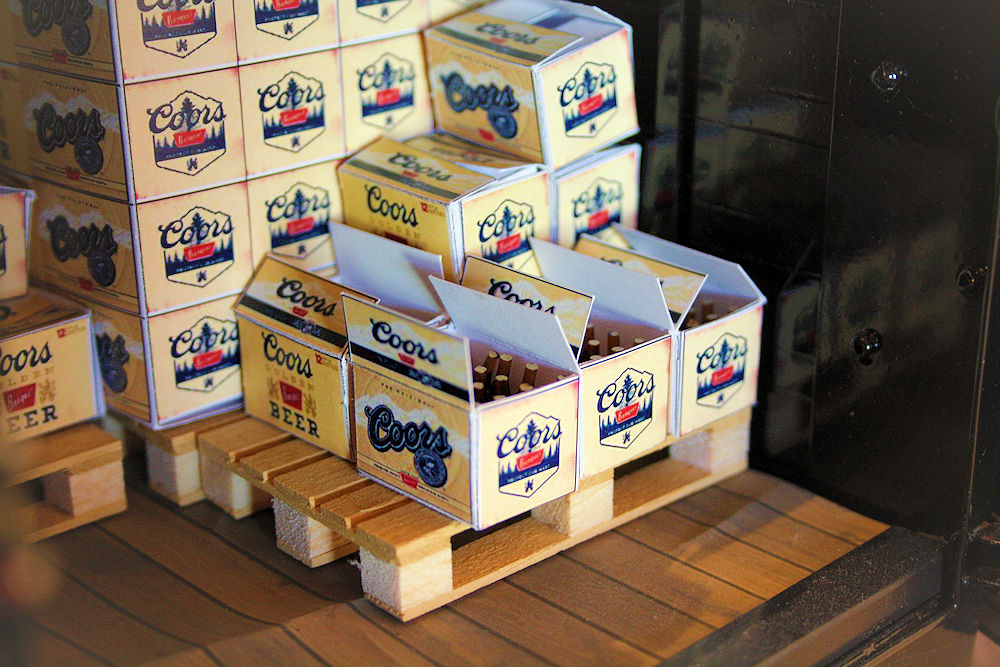 You will admit that this is a very impressive product range for a single movie, not to mention the old red BoS 1970s Cadillac Eldorado Convertible that would fit in to give Big and Little Enos their proper ride. So please forgive the tour de force of not concentrating on one item as usual, but it´s “a long way to go and a short time to get there”. I hope, you´ll forgive the quality of Highway diorama shelf shots (the trailers do not fit into the lighting tent) and will enjoy their atmosphere instead.