It is well known that Bentley won the 24 Hours of Le Mans endurance race many times back in the day when fame for endurance counted in sales because motorcars were still somewhat unreliable. Many people wrongly associate the 1930 victory with the more famous and more spectacular Blower Bentley. However, Sir Henry “Tim” Birkin´s supercharged Blowers (financed by Dorothy Paget) did not even finish the race, dramatically battling Rudolf Caracciola in his supercharged Mercedes SSK that also failed to cross the finishing line. W.O. Bentley had always been opposed to supercharging an engine and famously maintained that if you wanted more power, you needed more displacement. So instead of the spectacularly howling supercharged Blowers of the Birkin/Paget team, Woolf Barnato, Chairman of Bentley Motors at the time, took the victory in the same naturally aspirated 6 ½ litres Speed Six that had already taken the Le Mans victory for the Bentley works team in 1929, bearing the # 1 and therefore nicknamed “Old Number One” in 1930 when it crossed the finishing line now marked as  #4. Instead of Birkin, who had shared “Old Number One´s” 1929 victory because the Blower wasn´t ready then, Barnato was co-piloted by Glen Kidston in what was Bentley´s last Le Mans race in the 20th century. 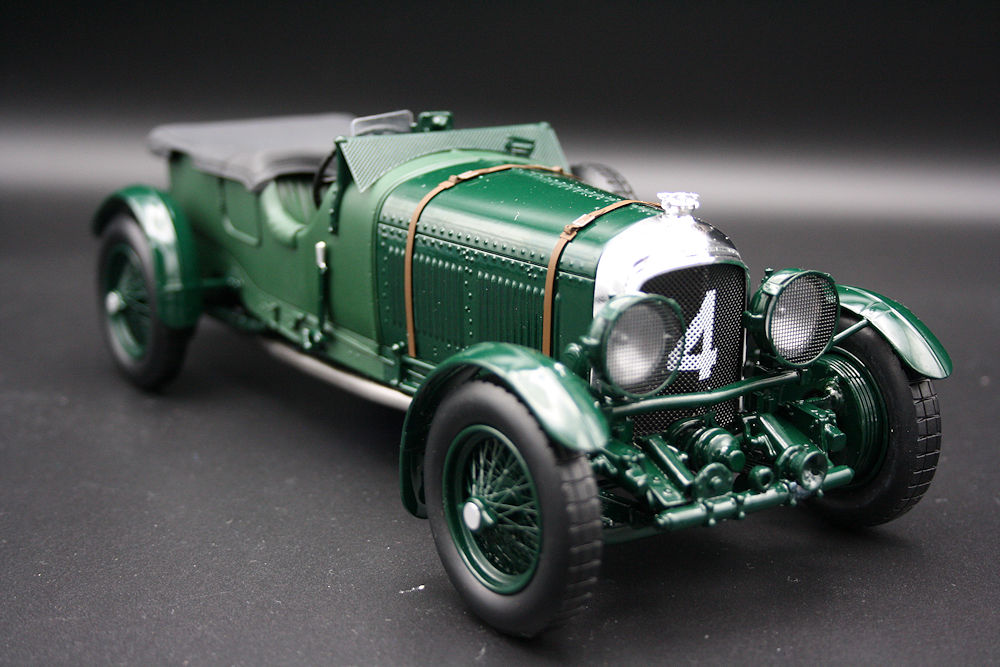 So the model that Spark gives us here in 1:18 sealed resin (as usual for them) represents the 1930 LeMans winner, but is also the 1929 LeMans winner, thus killing two birds with one stone. Is the model a winner, too?

Now, judgements on how accurately the model replicates the original car are rather difficult because the original race car hasn´t survived and only black&white photos and film coverage exist. Spark seems to have modelled the thing on a 1:1 “replica” so that our 1:18 scale is best compared to pictures of that: www.fiskens.com 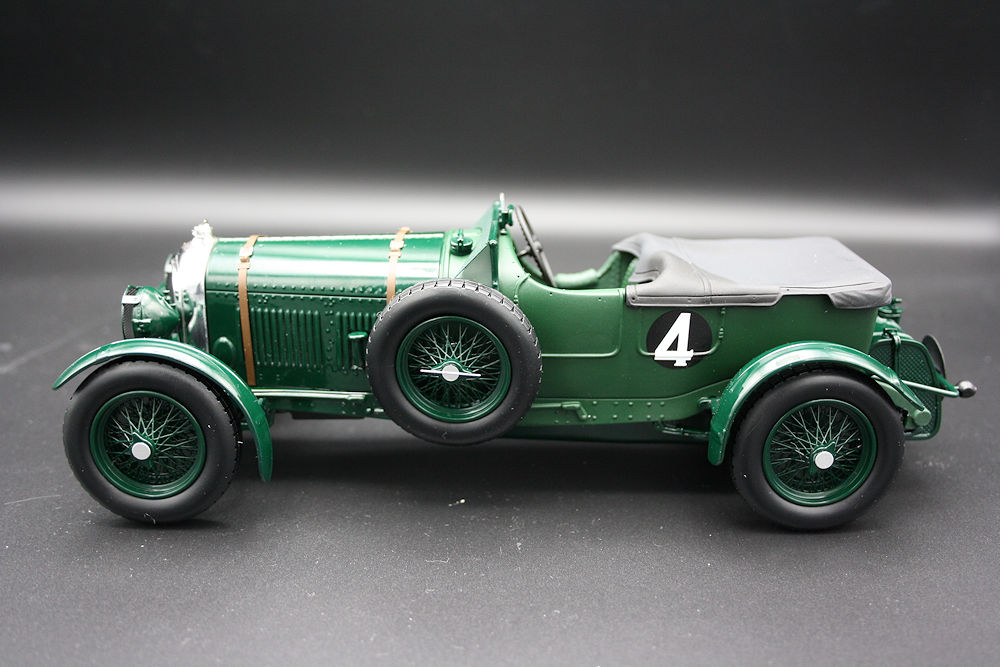 The body of the racer is in British Racing Green, partially in matte, partially in a shiny finish. Spark has finely replicated the protective mesh on the giant radiator and the huge headlamps so delicately that you would not want and touch those. The Bentley wings on the shiny chrome radiator shell are very well done and the coolant quick release filler cap even finer than the Minichamps Blower and Gurney Nutting Coupe. The mudguards on the wheel and particularly the finer parts front of the radiator look a bit plasticky, toyish and lacking refinement because they are moulded from one piece instead of being separate pieces like on the old Minichamps. 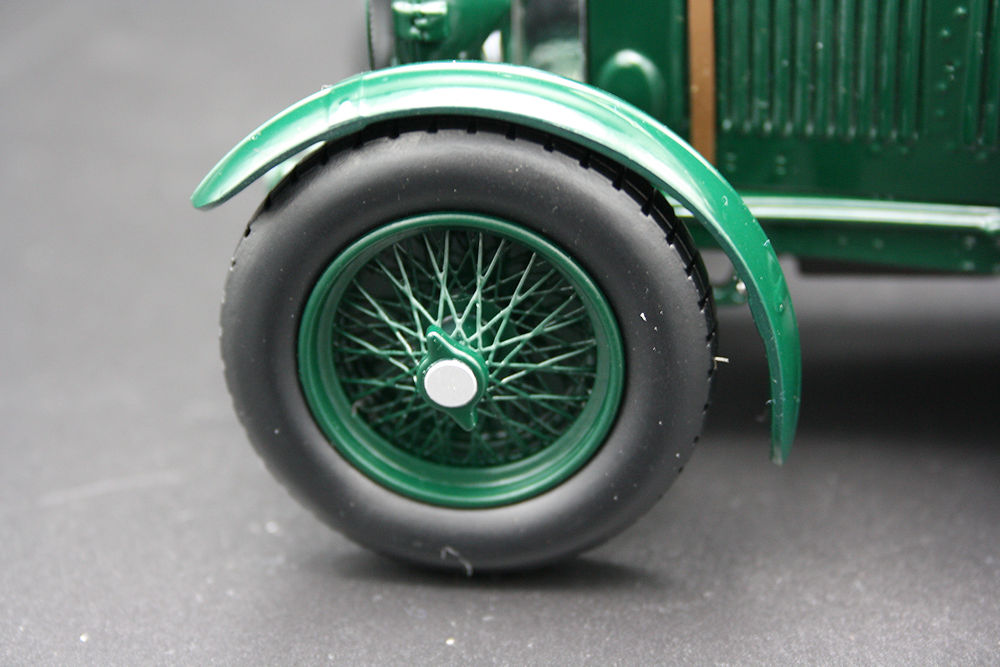 The wire wheels are as fine as on the Minichamps Blower, the tyre tread very different from the Blower, but remarkably absolutely true to the 1:1 replica´s and historic photographs of the LeMans winning car. A little bit of neglect seems to be on the knock-on-off wheel nuts in that the “wings” are simply as green as the wheels instead of black and the centre just around the chrome cap, not a poly-angular nut-shape. 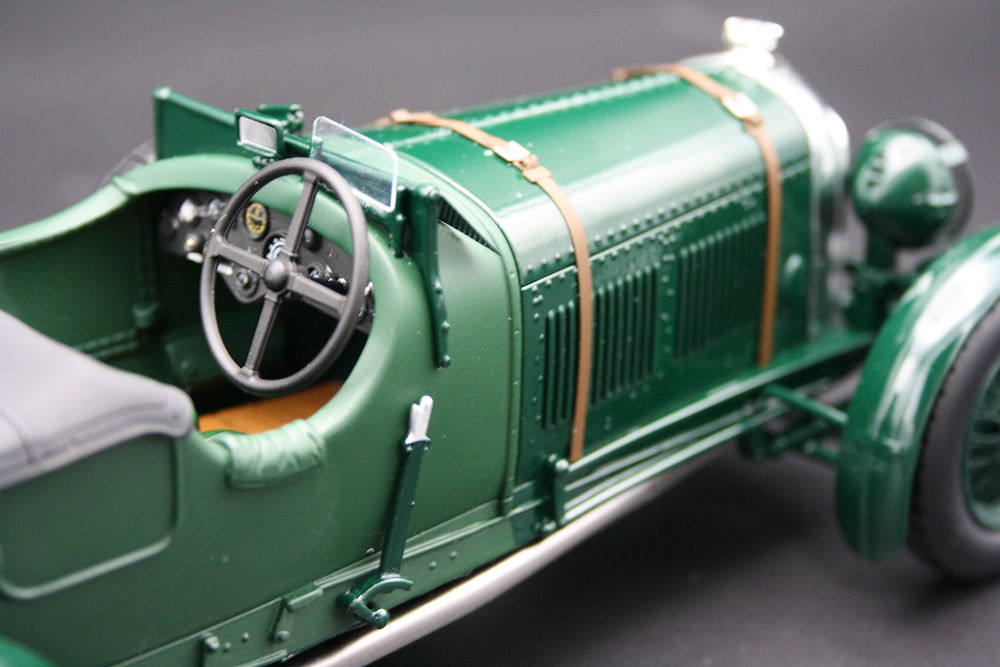 The bonnet´s sides convincingly achieve the effect of open louvres, while I doubt that they are. The bonnet straps and buckles, however, although the 1:1 aren´t very rugged either, look a little too flat and clean, especially in comparison to the Blower on display right next to it that sports real leather. 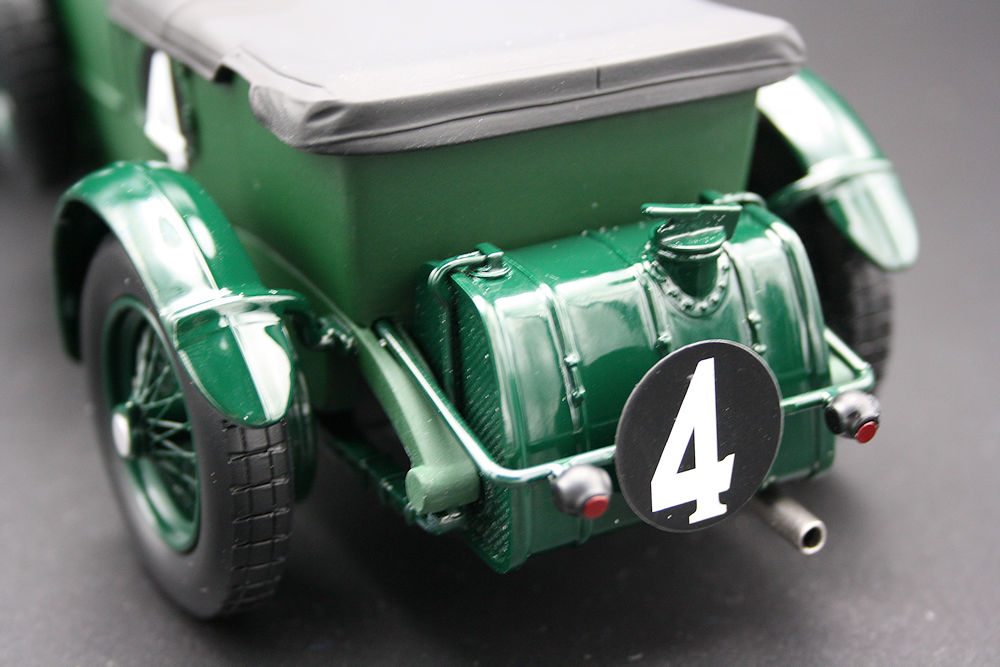 The rear looks very true to the 1:1, again including the toyish dominance of green, although the mesh protecting the gas tank lacks depth and seems more like the tank´s own structure than an application to its outside. In contrast to the 1:1, the underside has not been protected by Spark and the fuel pipes on both sides at the top look a little too rigid as if they were a metal bar. The quick-release-filler-cap seems like a prime-suspect, too, but turns out to be not, to be fair. The rear lights look tiny, and so they are, but Spark has only replicated the rearward lenses of the lights, not the sides. What I like a lot is the exhaust pipe. 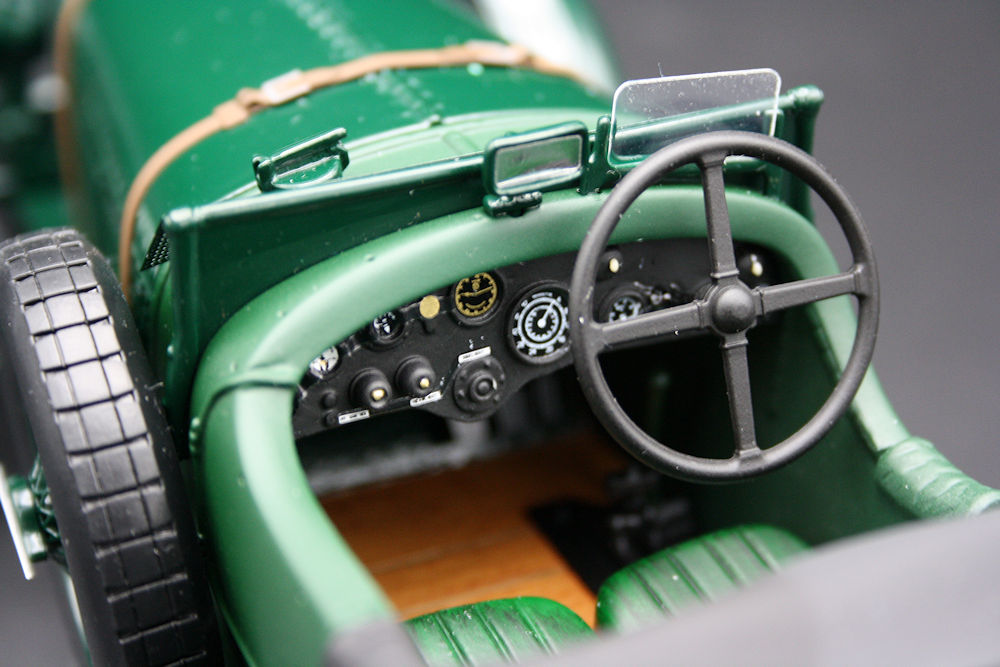 The outside leaver on the driver´s side is too flat and disappointing, just short of being moulded into the body like the armrest, and does not do the real handbrake sufficient justice IMO. That the only door on the passenger side does not open does not matter on this open race car. The instrument cluster on the dash has been stunningly replicated from the photograph of the 1:1, including the labels to explain the functions. Even the hands of the centre clock are in the absolute same position. The steering wheel may look toyishly uni-black and could only have been given more realism by adding the little lever at the wheel´s centre and the little push-button on one of the spokes. Down in the footwell, the wooden floor looks rugged, but a little too shiny, the gear lever has more refinement despite its awkward position than the handbrake lever, and you are wondering how Barnato must have threaded their legs past it to reach the pedals.

And that´s about it because as much as anyone would want to see the 6 ½ litre engine, there is no getting around the fact that a sealed model will deny you just that. 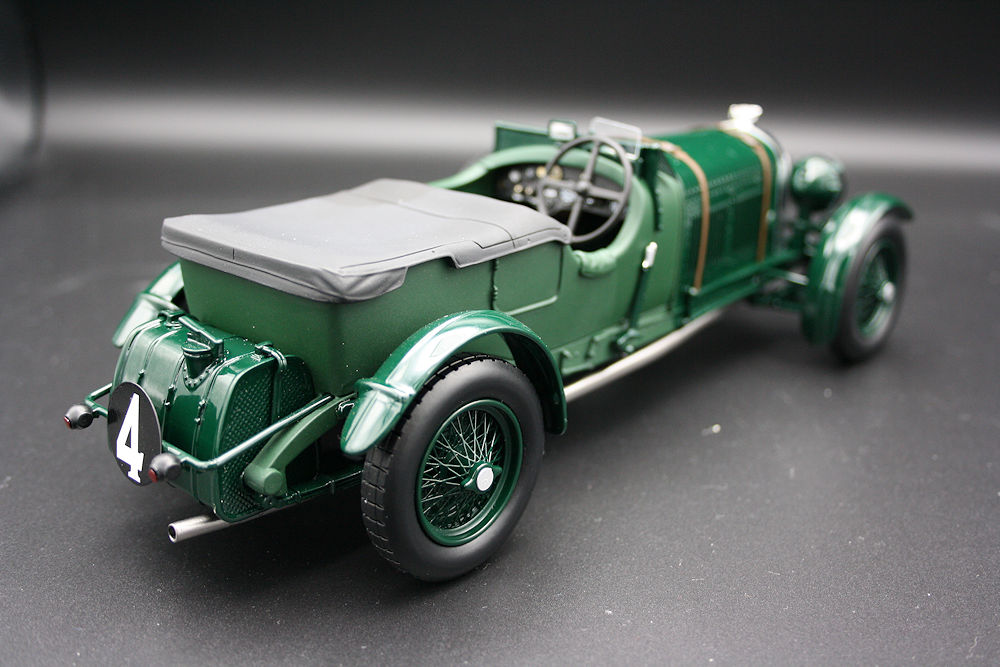 So, is this model as much of the winner as the real car was? Yes and no! To be fair, the real thing never got as much public attention as the Blower that always stood out more, so that´s something you cannot blame on the model. For a Bentley-  or LeMans-themed collection the model is a must-have because of its historical role as a legend, but any other collector may be forgiven to give this as a pass. The 1924 LeMans-winning Bentley by Tecnomodel looks more refined on photos, but is 60 Euros more expensive and IMO not as much of a legend. Yet, 160 Euros seem pretty steep for this Spark, particularly when compared to their own recent Donkervoort and something like the upcoming giant 1:18 MAN TGX diecast truck both costing the same money. Spark seems to exploit the Bentley legend here at least as much as Bentley themselves have always been doing.