While German politics of the 1930s were questionable, German cars of that same decade certainly weren’t. From super sleek, supercharged roadsters to magnificent, mighty limousines, it was an era of Deutsch automotive glory so closely linked with the Nazi empire that it’s no surprise that Hitler had a 770K Grosser and Hermann Goering a 540K.

In fact, legend has it that the latter was offered a 1939 Horch 855 Special Roadster as well, the most exclusive and expensive of all the cars that Mercedes-Benz’s pre-war rival ever made. Produced in only 8 examples, with a stunning body and an opulent interior matched to a brilliant inline 8, the only reason Goering could have refused the 855 is because Nazis seldom made the right decision. A model of one of these fine cars – the 1939 Horch 855 Special Roadster –is a must-have, because it is simply gorgeous. Yes, yes, I know, it’s a relative term, but if it’s any proof: when I laid it on the counter at the hobby shop, its glittering body surrounded by a black window box was the universal admiration of fellow customers and staff alike. 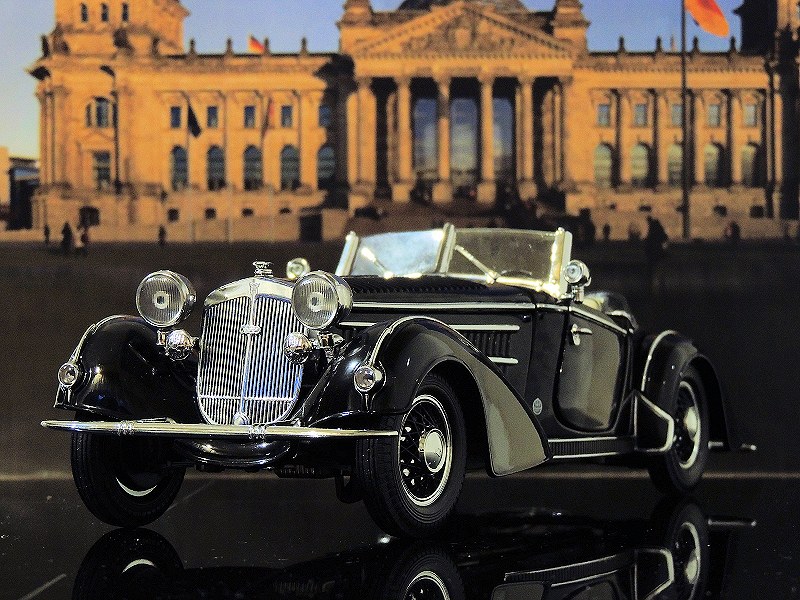 When I speak here of its glittering body, I am referring to Sun Star’s 1:18 model, available in several colour schemes as part of their European Collection. There are the three two-tones: silver/green with a black interior, silver/maroon with black interior, and silver/blue with red interior. Alternatively, there is the more sinister looking black with a beige interior, which for reasons of personal choice is the one being reviewed.

The model costs about $120.00AUD, although I’m sure you could do better than that elsewhere. Still, it’s quite good value, as I discovered. 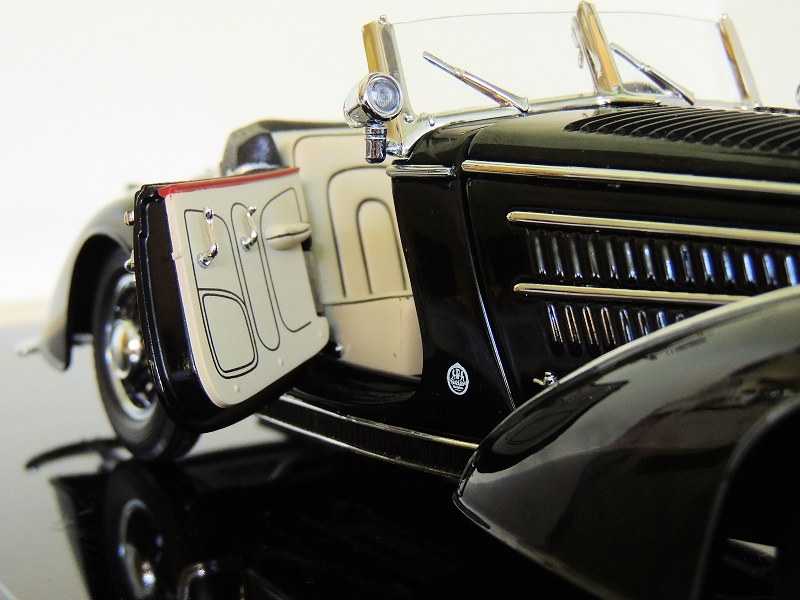 First of all, the box. It’s the traditional Sun Star European Collectibles box; smart, black, with a window, and relatively graphics-free, with a strict warning it’s for ages 14+ on one side. The model itself has a protective plastic cover, and is screwed onto a display stand. The latter which, like most collectors with limited space, I left in the box.

The heavily ornamented exterior is very good, with the exception of the movement of the rear light, and the fact that the two parts of the chassis move independently when the model is picked up in a certain way. Also, the rumble seats at the rear are not functional, which, considering that Maisto’s $50.00 Mercedes-Benz 500K SR’s rumble seats are, is not exactly wonderful.

Despite this, it is a well-executed job. Particular highlights include the ‘Glaser’ coachbuilder’s logo printed beautifully behind the sweeping front fender. Very good, Sun Star! So good, in fact, that with the help of a camera lens, the ‘Dresden’ and sedan chair artwork are clearly legible. This is excellent. Also, the front grille looks very realistic, peaked by the Horch logo, the four rings (later to be adopted by Horch’s successor, Audi), and the horseshoe mascot. The lights and indicators, too, together with the chrome work, are also refined, and the little touches combined with overall style of the exterior, ensures that the result is nothing but stunning. 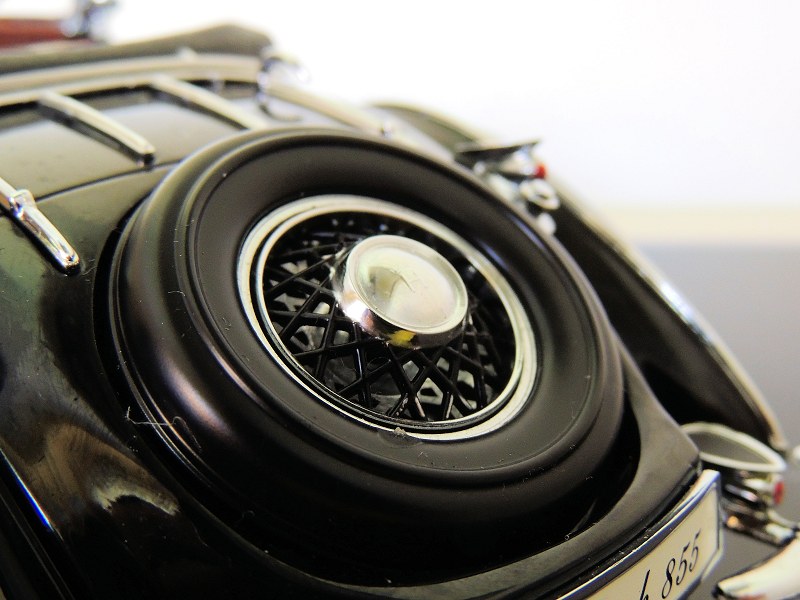 Now, I have found to my chagrin that the interior of Sun Stars never compares to the exterior, but I confess with the Horch, I was pleasantly surprised. It is at almost AUTOart levels of detail and refinement. There’s no carpet, regrettably, but the upholstery looks wonderful, the pedals have ‘H’ printed on them, and the little window cranks and wood dashboard are beyond belief. It is a very good effort, and to see this sort of thing in a model just over a hundred dollars is a very happy sight indeed.

The centre-hinged bonnet pieces feel a little unrefined, but nothing too bad, and the engine underneath is…well, it depends which part of the bonnet you open. One side looks a little ordinary, while the other side has much more to offer, from a ‘Horch’ embossing to brightly painted componentry. Neither is exceptional, but one side’s certainly good. 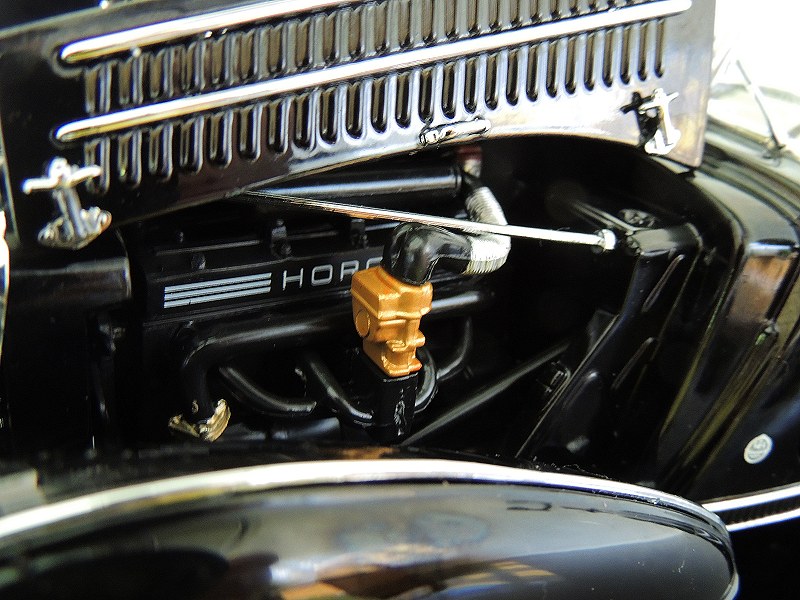 And as for recommending it, yes, I certainly would. Prior to ordering, I looked at photos but I confess that when I actually removed the solid piece from its box, it exceeded my expectations. And any model that does that, any model that is the admiration of the hobby store’s Saturday clientele – any model which combines good effort with good car, is worth the dosh it costs. 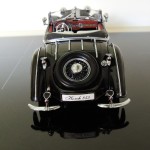 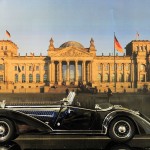 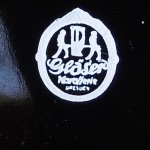