At first glance, you reference the title and then the photos one would think this was a fake Ferrari.  But in fact, no, it is definitely a Ferrari with a chopped roof and performance that exceeded the original base Ferrari F40.  This Yellow chop-top Ferrari came to be known as the F40 LM Barchetta or F40 Beurlys in certain circles of the Ferrari community.

The car was created by Jean Blaton aka Jean Beurlys alongside Tony Gillet.  Obviously, the major exterior change is the deletion of the roof.  With structural integrity negated the need to install a very strong tubular steel cage was a necessity. And windshield was re-created from a single-piece polycarbonate sheet otherwise known as Lexan.  When all was said and done, Ferrari wasn’t dazzled with the decision to re-invent the look of the Ferrari F40, so they ordered Jean to remove the F40 logo as well as the Scuderia shield. 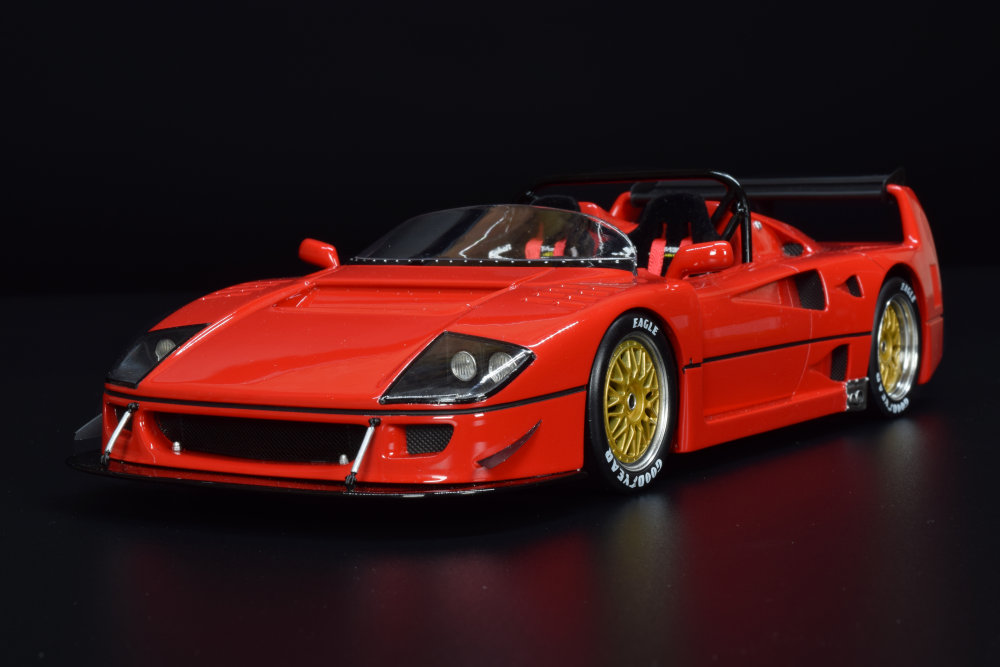 Here at DiecastSociety.com, we appreciate different, so when the opportunity to acquire an on sale example of the 1:18 F40 LM Beurlys Barchetta from TOP Marques we jumped on it!  If we read some of the articles/reviews about the TOP Marques, you know our relationship has been love/hate.  Love equates to the unique specimens they release and hate is driven by the numerous challenges with quality control with each example we received to date.  We’re happy to report the example of the TOP Marques  F40 LM Beurlys Barchetta did arrive unscathed. Well, it did for a short period…

Writing the review we noticed the rear right side locking pin on the outer corner of the car had gone missing from the time we took the photos to the time it took to shoot the short video – if you what the video you will see the part has definitely gone astray.  Something this size is almost impossible to find.  And we’ll take full responsibility here as the model was delivered with this piece attached as the photos will attest to.  However, the curse lives on LOL. 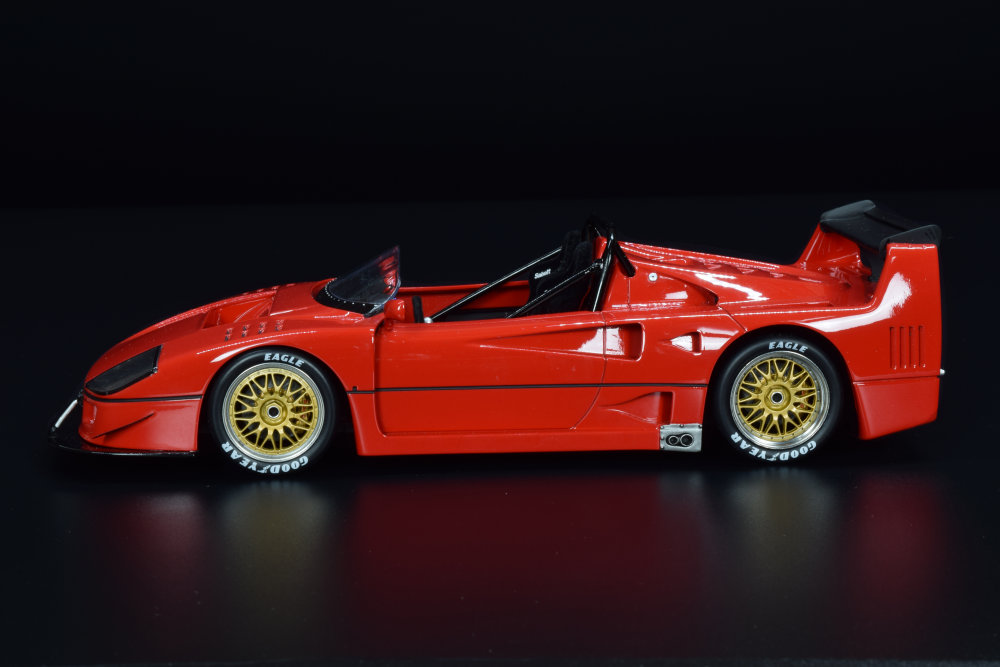 We assume other than the Yellow, the additional colours from TOP Marques are considered fantasy colours.  Since our in-house Ferrari fan only collects Ferrari models in Red the sample here is painted as so.  As for the exterior paint, the model proves well, we find no glaring issues.  Even the transitional element of the Black pin-stripping from front to almost rear of the car is executed perfectly.

Since the model is resin and sealed, panel gaps and shut lines aren’t an issue.  If you prefer them more defined with blacking this is not the case here.  Overall, we would say the model captures the structure of the original car well with a few exceptions.  Read on. 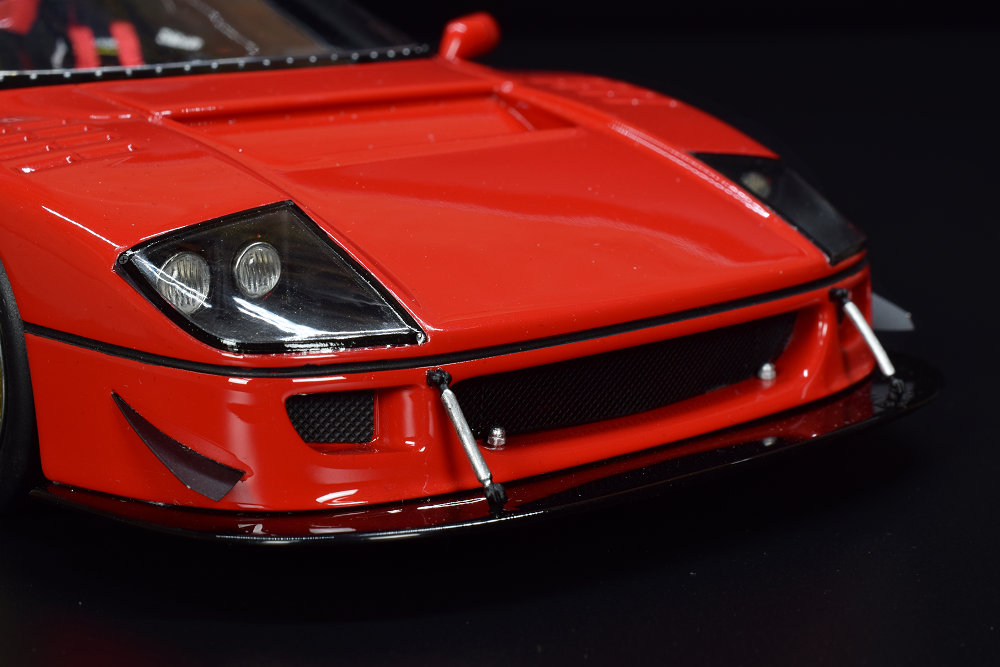 We must note all the openings (aero and cooling) in the upper and side sections of the car are capped with solid plastic.  We prefer metal grilles, but what is offered is well executed at that.

The front features a large lower splitter with supporting hardware.  The lower centre opening is executed with perforated metal while the smaller two openings on either side are solid plastic bits.  Headlight definition here is average at best. 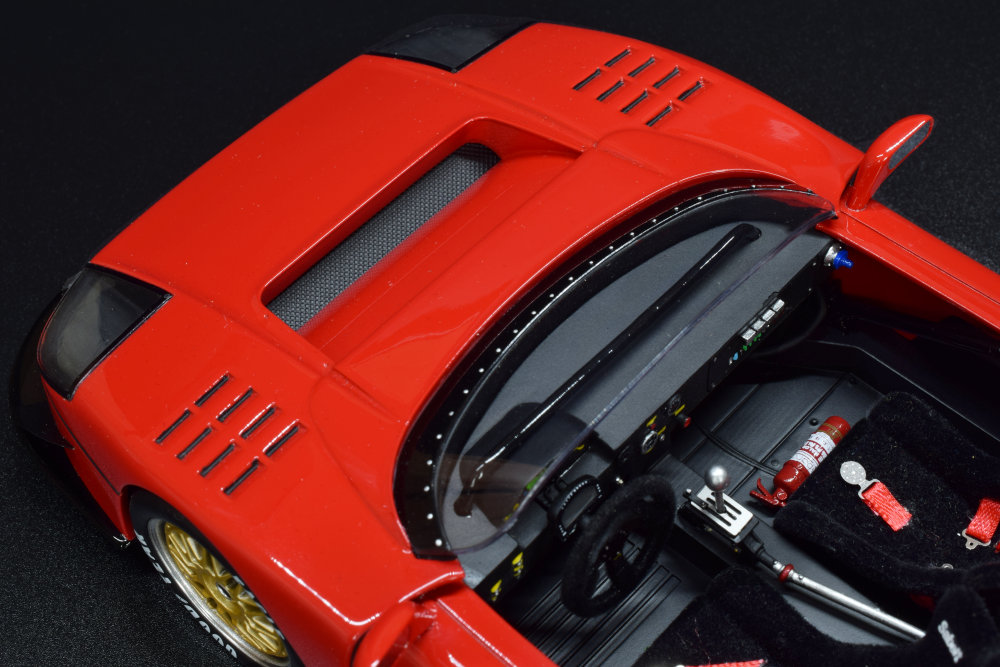 As you move up the front section each element is defined but the larger opening in the centre does feature solid plastic.  Which is typical of many resin models. What is striking and well implemented is the front custom windshield, love the added detailing of the rivets to the lower section. 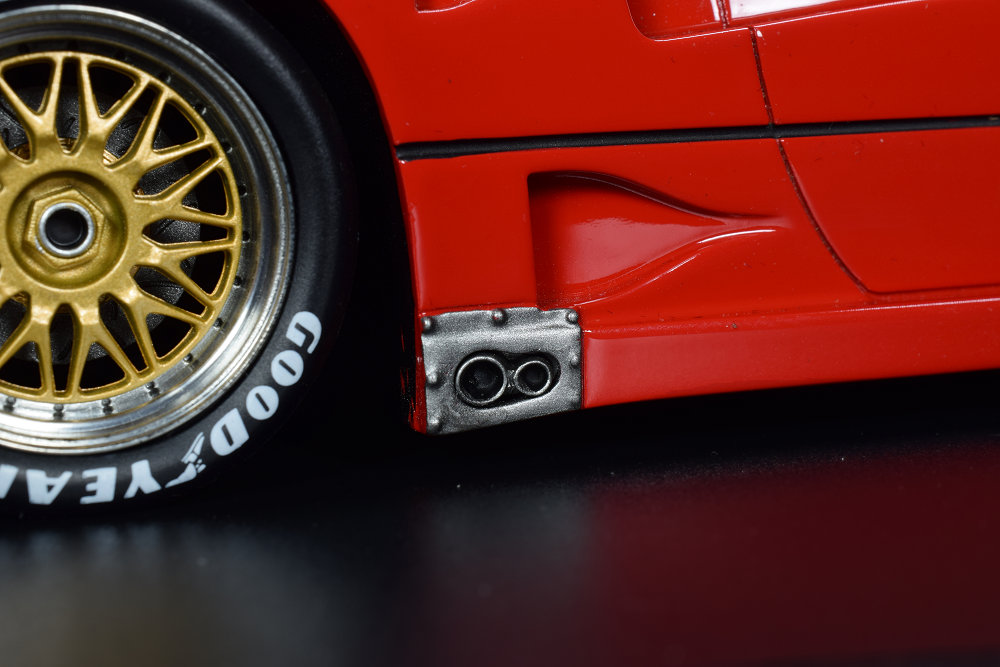 Also, the side exhaust, another custom trait of the revised F40 LM Barchetta is nicely defined on both sides.  The colouring, sheet-like metal and rivet work does amp the realism factor here. 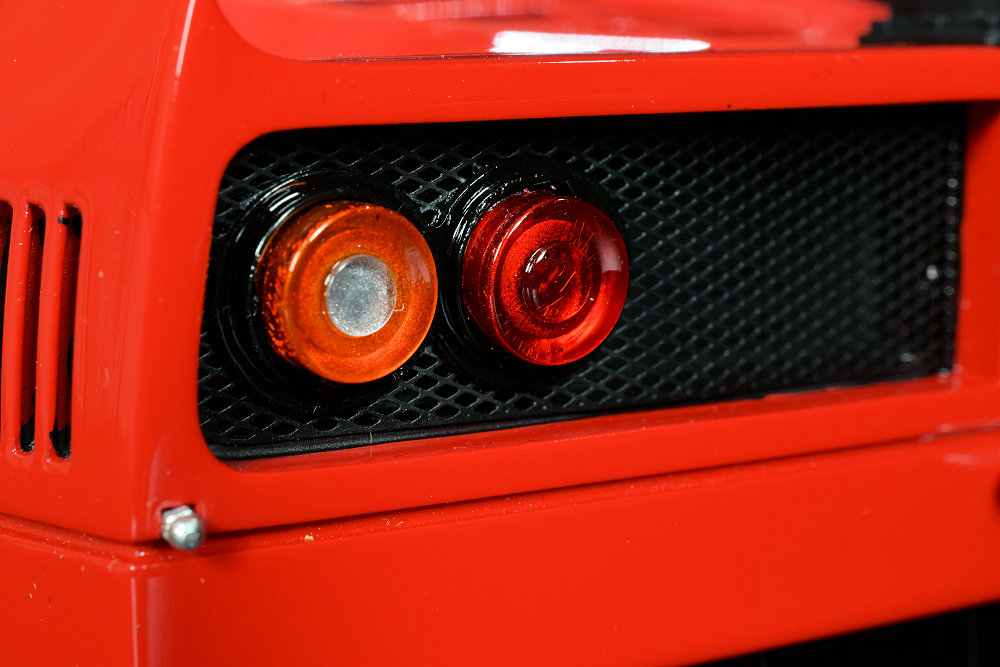 The rear is very much like the original F40.  Props to TOP Marques for creating the massive rear grille work with a metal grille.  Though, those looking for a hint of the Ferrari powerplant won’t see anything of interest beyond.  Taillights are quality pieces; colour separation of the individual section is definitely welcomed.  The two silver like pieces on either side is locking pins/apparatus, which is usually defined in photos covered in tape.  Finally, a hint of the race-geared design of the lower valance is shown with five fins exposed. 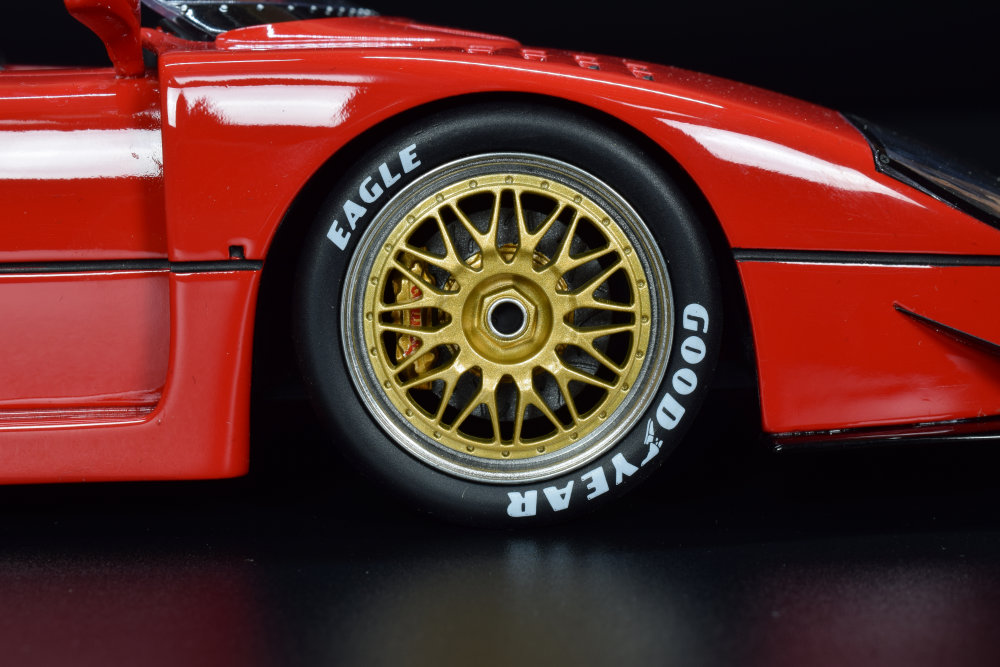 At first glance, the wheels do look genuine, and for the most they are – TOP Marques does capture the difference within the appliable off-set front and rear.  What could have been accomplished better is the depth in the single-race style centre nut.  The depth of each is not aligned to the original wheel design.

Interior wise, we were surprised how good it was.  We were very impressed with the overall look and feel.  The tubular supporting cage and fuel filler are cool elements.  Inside the seats feature a fabric material that extends to the steering wheel.  Ready to race, the seat-belt harness is fabricated in cloth as it should be. 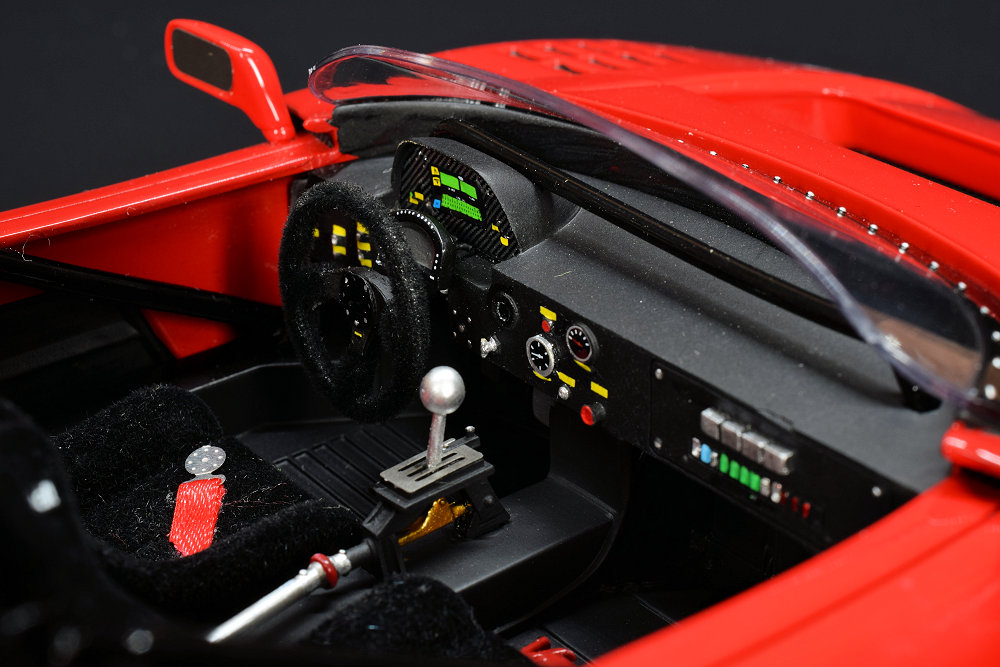 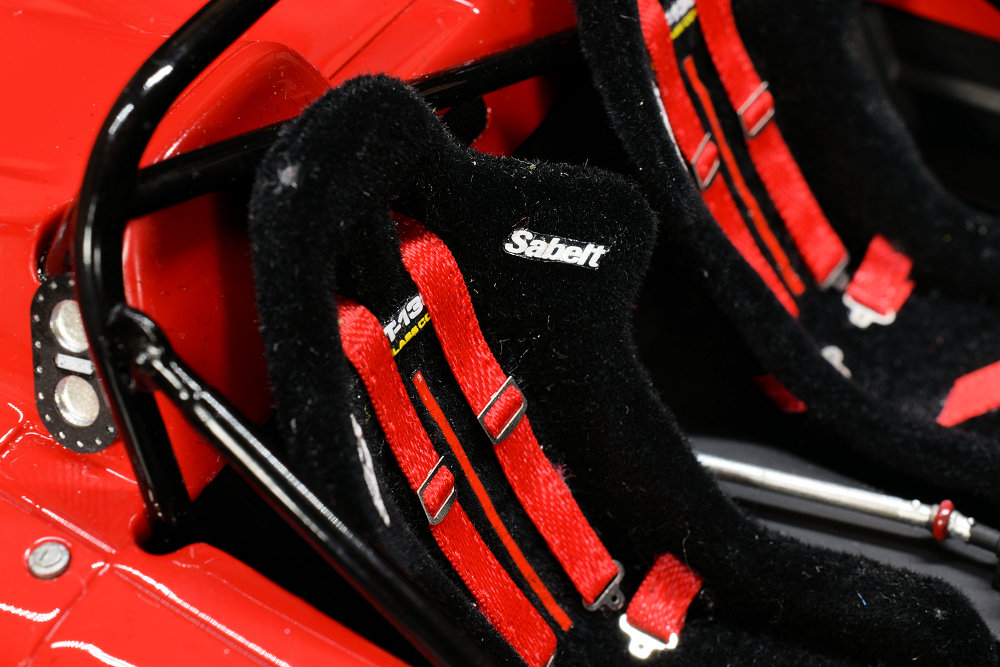 Dash is carefully arranged. The supporting cast of buttons and instruments do provide an array of colour and definition that satisfies.  Even the addition of the fire extinguisher is a cool add!  We must comment on the centre console, the gated shifter is beautifully enhanced with metal bits.

The uniqueness factor of the TOP Marques Ferrari F40 LM Beurlys Barchetta cannot be denied.  Those looking for something different will surely gravitate to the model.  Some Ferrari purists may not agree but others will surely enbrance it.  Either position is okay, however, one does need to appreciate the vision of Jean Beurlys and the effort put forth here. 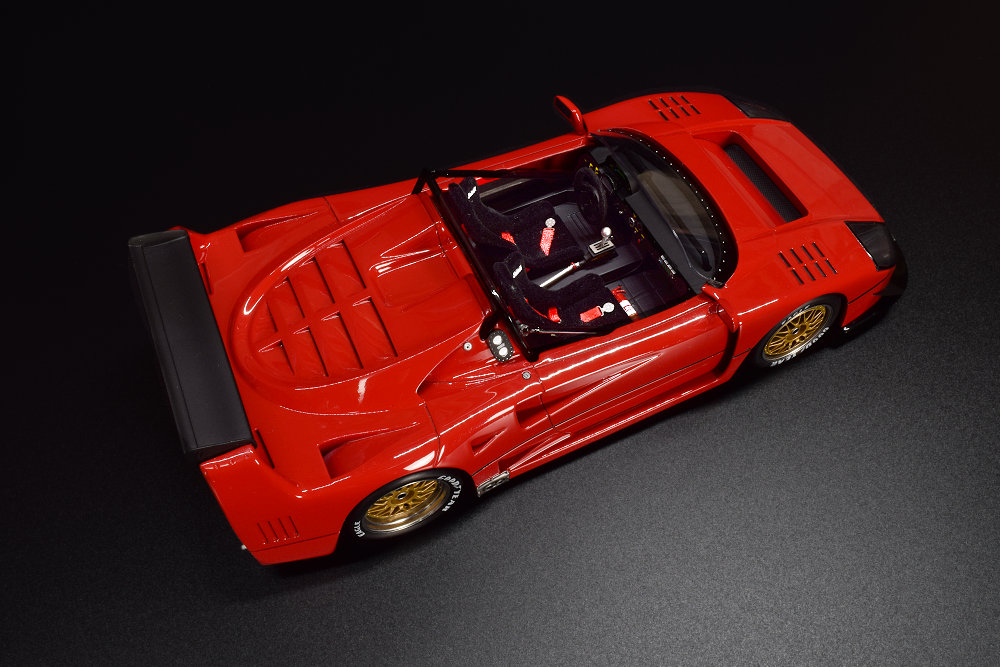 TOP Marques does a great job with the original vision, other than our dislike of the wheel design, the model on a whole does perform well for resin and static example, especially on some of the interior elements.  The car’s overall coolness factor can’t be disputed either.  In short, this car is coo!  And TOP Marques does a great job in bringing it to us in scale.  Enjoy the pics!